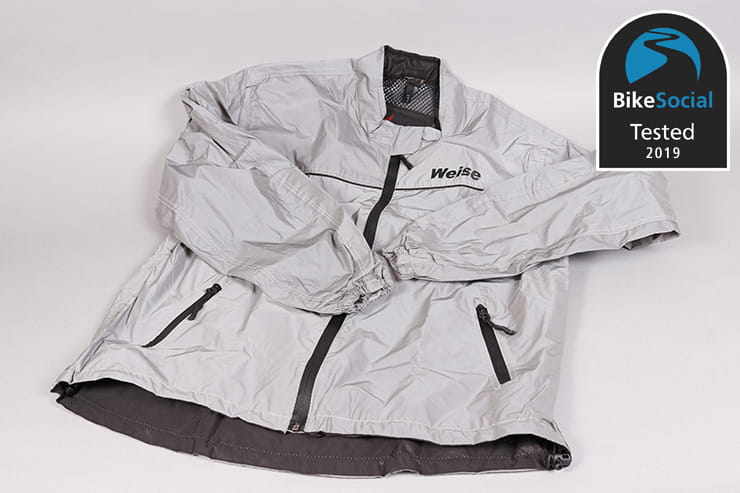 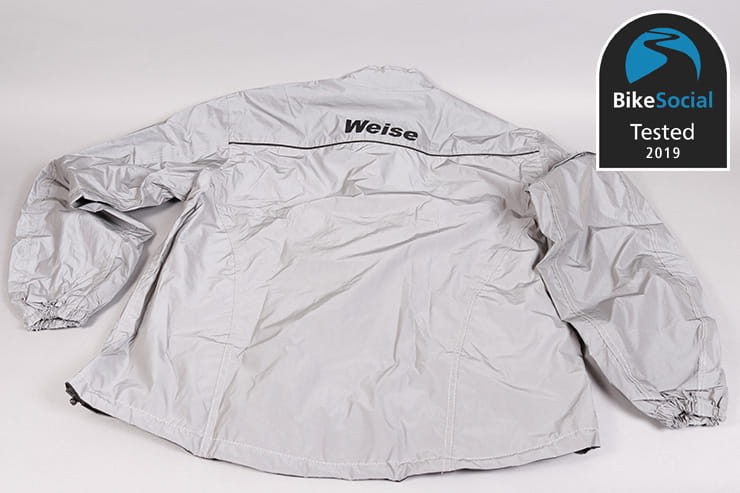 With a 50 mile commute and no option to use a car, I ride all year round no matter what the weather’s doing, so it’s really important that the kit I wear is comfortable and protects me from the weather.

My daily ride takes in twisty country roads, traffic jammed trunk roads, dual carriageways and urban areas, with longer ride into the Peak District or Wales at the weekend. I’ve had these Weise Vision waterproofs on for around 300 miles in some truly awful weather while riding my Kawasaki Versys 650, a loan Honda CB500X and my Suzuki Burgman 650. At the upper end of the price scale, I’m comparing them to my trusty Hein Gericke oversuit, which I’ve had stashed in my pannier/under the seat/in a backpack for about eight years. Let’s see how they get on... 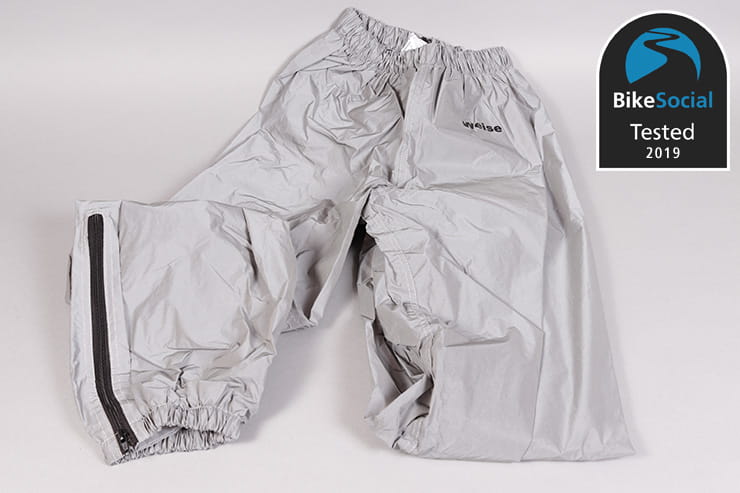 Out of the packet I was surprised at how thick and almost waxy the Weise Vision suit felt; my old Hein Gericke suit is quite thin and flimsy – almost silky – but the Vision felt a lot more industrial. That isn’t a bad thing; it probably equates to being robust and having a long life. It definitely feels waterproof.

I ordered the Weise jacket to be the same size as the Richa Infinity jacket I was testing; even with it being snug-fitting and sporty, I really struggled to get the Vision over the top. The Vision’s arms are quite slim, so the lining of the sleeves got caught on my main jacket’s armour and every Velcro tab. The cuffs, although elasticated, made my gloves a nightmare to get back on.

I wrongly assumed that being an over-jacket, the sizing would be bigger than standard to account for the jacket it was going over. I was wary of going too big – my H-G suit is two sizes over to make it easy and quick to get on, but at the cost that if the wind gets in it (it always does) it inflates; depending on the speed, you can be riding along looking like you’re wearing one of those comedy sumo suits. If you want to buy the Weise, either try it on, or buy a size bigger than your jacket. It will of course vary depending on what you’re wearing – a pair of leathers will be more figure-hugging, but have their own challenges when getting kit over them.

Snugness aside, the Weise Vision jacket is comfy over your regular riding jacket once you’ve shrugged and moved your arms around to get it to sit right, but if the heavens suddenly open, it’ll be a fair effort to get it on before you’re wet.

It’s a similar story with the trousers. By the time I got them over the snug-fitting Richa Colorado trousers I was testing, they looked like shrink-to-fit jeans (remember those?). Even at a couple of sizes over the trousers underneath (I have a big bum) I was strutting around the garage like a re-enactment of the Monty Python Ministry of Silly Walks sketch trying to get them on. And getting them on over your boots? Even with the ankle zips fully open, forget about it. Even with my relatively slinky summer boots and using the old plastic bag trick there was no hope. The Vision trousers are strictly “On Before You Set Off” and “Once On Staying On” trousers for me. All that being said, even though they looked skin tight, they were really comfy when I was sat on the bike. 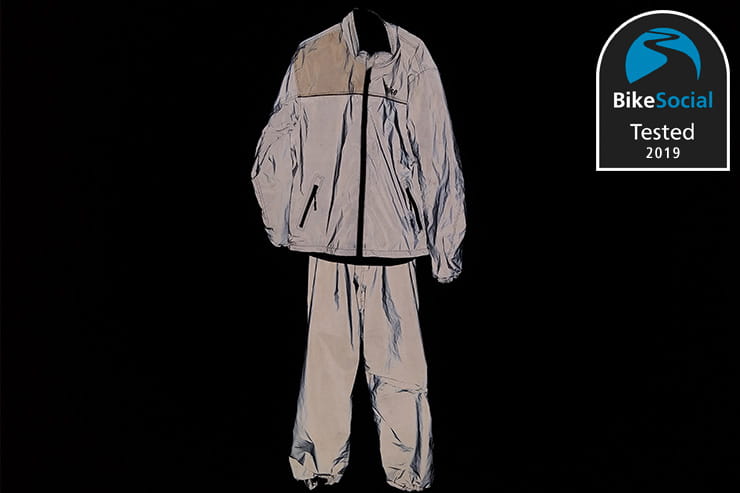 Photographed with flash in the garage, you can see how well the Weise Vision reflects light.

As a waterproof oversuit with no facility for armour, the Vision doesn’t need to be tested as Personal Protective Equipment. But I will class the high visibility aspect of this kit as the first line of protection. If they’ve seen you, they’re less likely to hit you.

The Vision suit uses the latest 3M Reflection textile technology, and unlike almost every other bit of motorcycle kit that has token patches of high vis, the unique selling point of the Weise is that the entire suit is coated in it. It isn’t subtle. You simply can’t be missed. What sometimes looks like a matt grey suit is transformed into a shimmering silver torch in the slightest bit of light. I’ve not seen anything quite like it. Under headlights you look like an angel on top of a Christmas tree.

In respect to visibility it really can’t be faulted – I’ve never seen high vis so effective. But, and it’s a big but, I felt really self-conscious wearing it. It’s one thing to be seen by dozy drivers, it’s quite another drawing attention to yourself. I’m undecided if it’s a good thing or not.

Weirdly, I don’t know if it’s the angle or what, but on the CB500X the section of upper arm you can see in the mirrors produce the most hypnotic shimmering rainbow effect when the sun comes out. But the Versys’ mirrors don’t do it. Anyway, one thing is certain, on cold dark winter nights nobody is going to be more conspicuous than you! 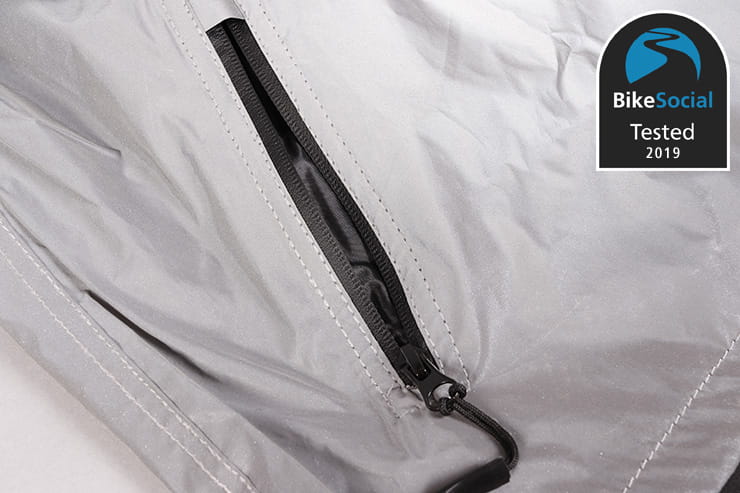 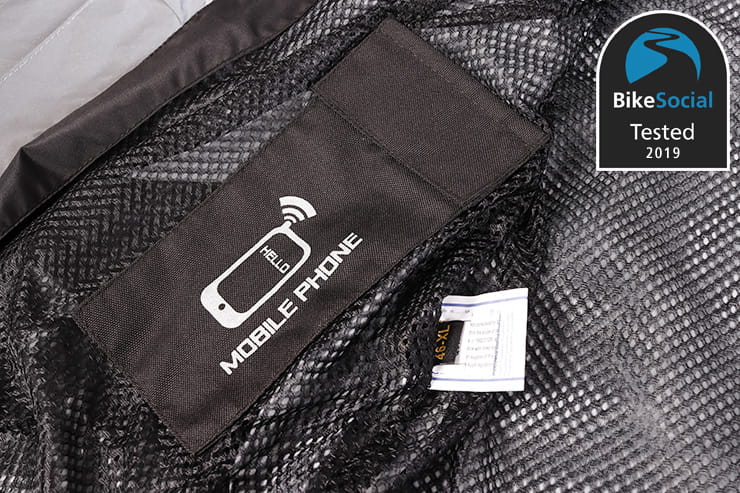 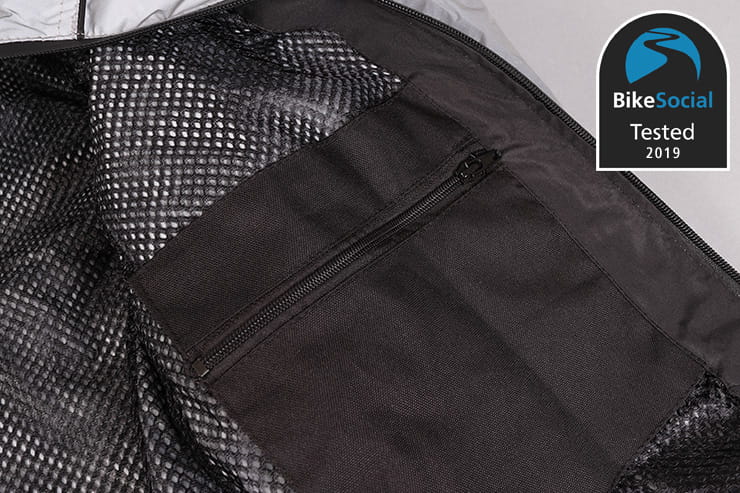 The Weise vision jacket has two zipped pockets on the outside, and two more on the inside – they do have water-resistant zips on the outer ones, but water will still get in.

There are no pockets on the trousers. 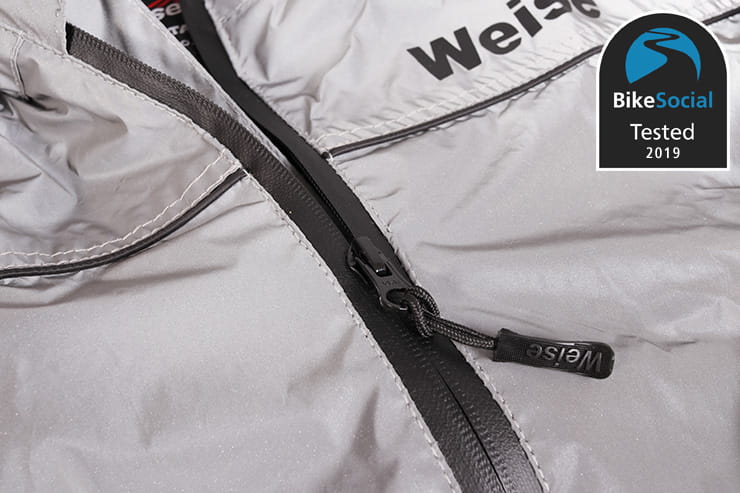 On the jacket there’s one fastening and that is the main zip. It’s quite thin and oddly has no folded-over storm flap to channel water down and out, yet the zip isn’t fully sealed to waterproof it; something of an oversight on a high-end waterproof jacket.

The elasticated cuffs are too small for me, and not stretchy enough – I struggled to get my summer gloves back on properly, never mind bulky winter gloves (and bearing in mind winter is when the vision suit is most likely to be used).

The trousers have calf zips that I found to be positioned awkwardly – I have a long-standing back injury and to do the zips up meant I had to bend and twist at the same time, which my back doesn’t. I found the fabric kept getting caught, which was very frustrating.

The waist is elasticated and is comfortable. 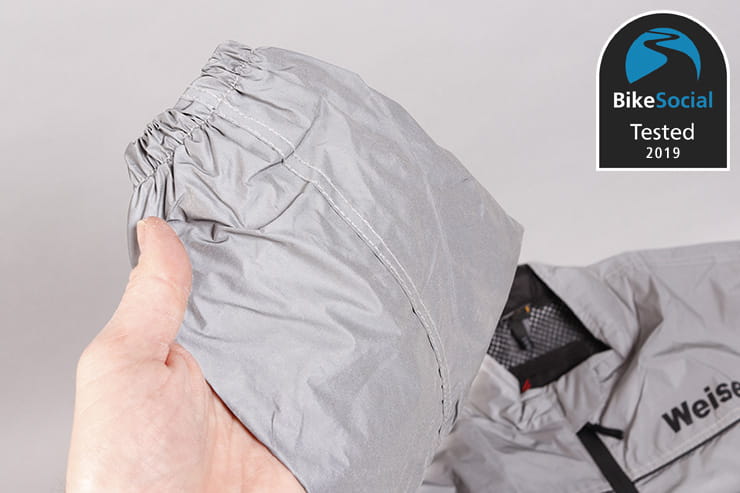 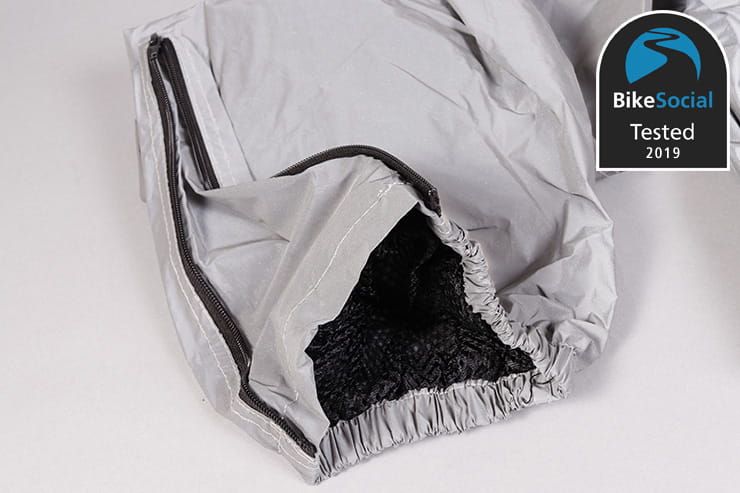 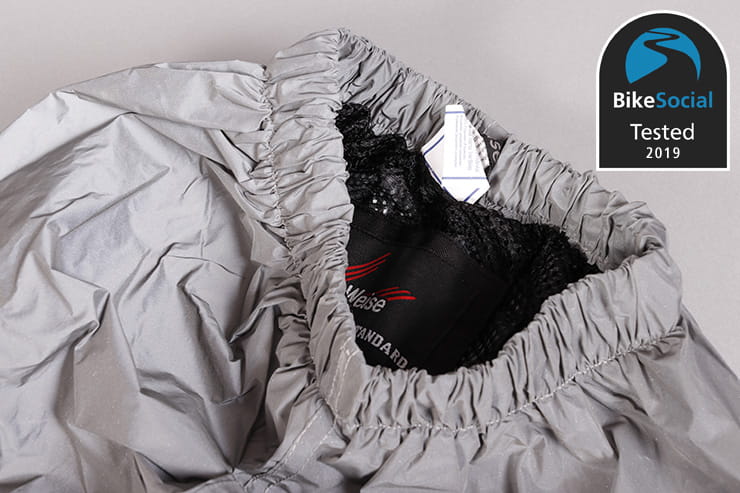 There is no adjustment on either the jacket or the trousers.

Neither the jacket nor the trousers have ventilation. It’d let the rain in!

I remember that, as a teen – fresh-faced and just starting out in the biking world on my CG125 – my Dad advised me to put my waterproof jacket over the top of my ancient blue Segura leather jacket if it was cold in the morning; “If it’s not raining, wind is your main problem. Waterproofs are also windproof so will keep you warm”. And this is true. The Richa Infinity jacket I was testing was too draughty on some chilly mornings and I resorted to pulling over the Vision Jacket. Despite all the advances in textile technology, my Dad’s sage advice from over 20 years ago still rings true. 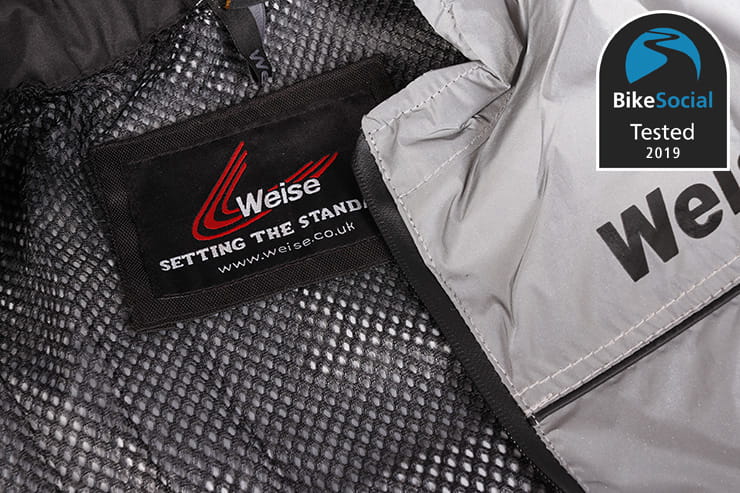 A mesh lining helps to trap air, which adds to the extra warmth, but it seems to get caught on every Velcro hook it can find. On my RST TT Classic jacket the epaulets and belt got snagged, while the chest pockets, vent zips and armour seams were the issue on my Merlin jacket. 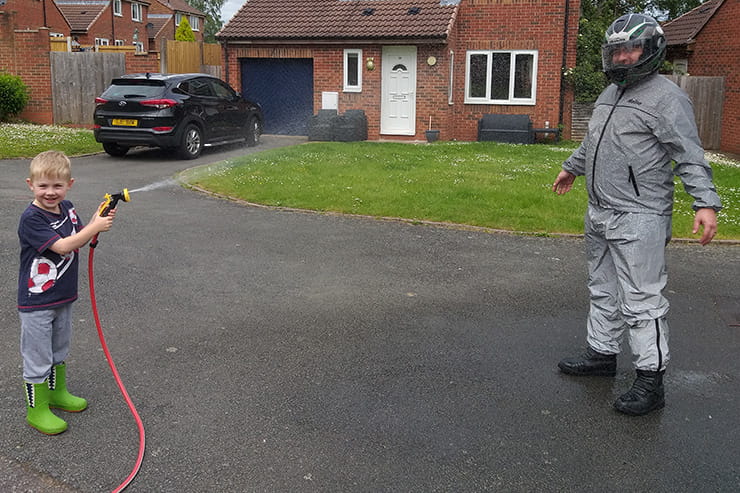 The main point of the Weise Vision waterproof suit. And disappointingly it falls horribly short. For the first couple of weeks there was no rain, so I resorted to donning the suit and letting my lad Harry unleash the hose. Not even his joy-filled face could distract me from how fast the suit started to leak. On a combination of spray patterns I could feel water ingress at the shoulders, stomach and crotch in minutes. Not good, but also perhaps not a fair test. So I waited for the real deal to come, and come it did…

High winds and torrential rain battered me for over 40 minutes down the A5; the real-world results were, sadly, no different than Harry’s aim with the hose. My shoulders were wet, my chest and stomach were soaked, my bum and crotch soggy. And that’s not just the kit underneath, that was me! The Weise waterproof suit was not waterproof. 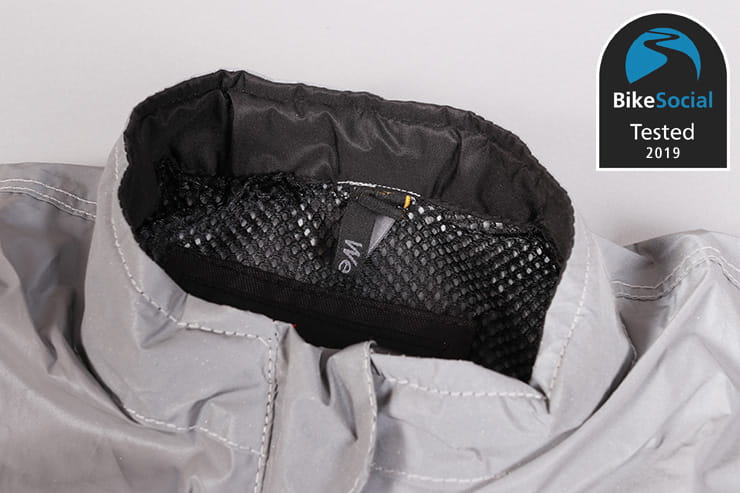 For one of the pricier suits on the market – £90 for the set – the Weise Vision performs poorly. It’s difficult to don and not waterproof when you do, so it fails in its primary aim.

As a high-visibility garment it performs flawlessly, but if it’s waterproof kit you’re after then there are far more effective (and far cheaper) options on the market. To put this into context, my Hein Gericke suit was £25 over eight years ago, and despite its billowy tendencies, it far out-performs the Vision in terms of ease of use and waterproofing. A shame, as Weise has a solid reputation for affordable and high-quality gear, and the details in the build of this suit – from the mesh lining to the well-finished collar – are really good.