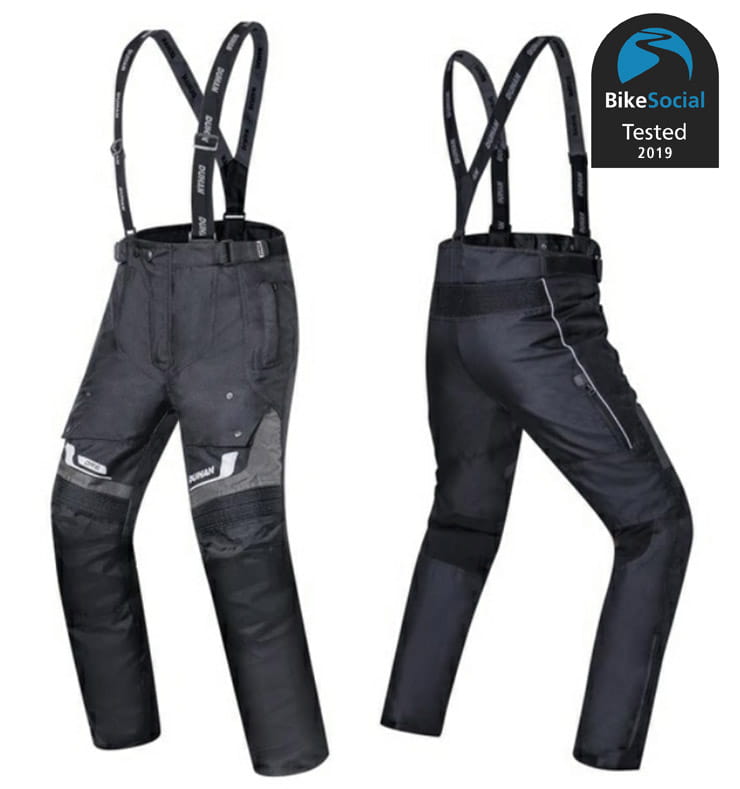 I currently ride both a Kawasaki Versys 650 and a Suzuki Burgman 650 100 miles a day in all weather. Wearing the right kit is as important as riding the right bike, but being a Yorkshireman, I don’t think you necessarily have to pay a premium for good kit. Essentially, I don’t like being cold and wet, but I don’t like spending money either, so I bought this pair of Duhan textile motorcycle trousers from online retailer www.wish.com…

If you’ve not had the pleasure of shopping on Wish, it’s a bit like a hub for Chinese rip-offs of top-end kit, but the real fun is that it’s a lottery; will the product you receive be of the quality you expect or not?

Now, I can hear you questioning my decision to use this site to buy what is protective kit that I’d rely on in the event of an accident, but nothing ventured nothing gained, right? My faithful RK Sports Storm trousers were patched and repaired to death and falling apart, so out of curiosity I took a punt. £606 reduced to £76? Bargain! They’ve been used pretty much every day since April, and clocked around 10,000 miles. 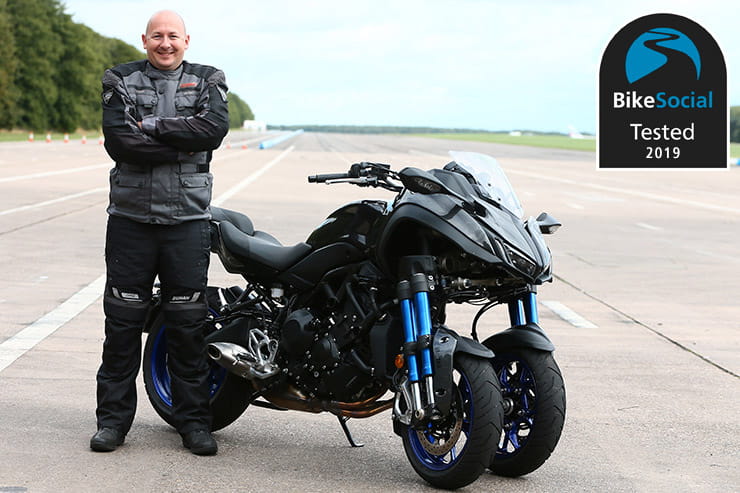 Graham at the BikeSocial Test team track test of the Yamaha Niken, wearing his Duhan trousers

Things got off to a bad start. Wish does things in Chinese sizes. You are warned of this, but as I’m normally a L/XL, I plummed for the 3XL. I was wrong thinking this was enough – the Duhan locals must be very dinky as the legs were a touch short (I’m 5’10”) and the waist a touch snug (I’m a 38” waist). Pride stopped me from sending them back for the biggest 4XL size, so I stuck with them.

That said, on the bike they felt perfectly comfortable and never restrictive. They’re obviously never a £600 pair of trousers, but they do have a £76 quality feel to them, though the outer material feels somewhat thinner and more flimsy than my binned RKs.

The Duhans supposedly come fitted with CE-approved armour in the knee/shins and hips, but they don’t have CE marks on them, so they’re almost certainly not. I took out the pads and replaced them with my Knox ones, just to be safe.

Most trousers I’ve had in the past have tougher material on the knees and bum, to give you extra abrasion protection in a fall, however the Duhans don’t have this, which is highlighted by the stitching fraying in several places, while at the crotch the reinforcement panel has come away almost completely. If I’m honest, I’m not convinced of their protective qualities.

My RK trousers hit the deck twice, and both times they saved my skin; I never doubted they would.

Needless to say, the Duhans have not been approved to the new CE standards for PPE. 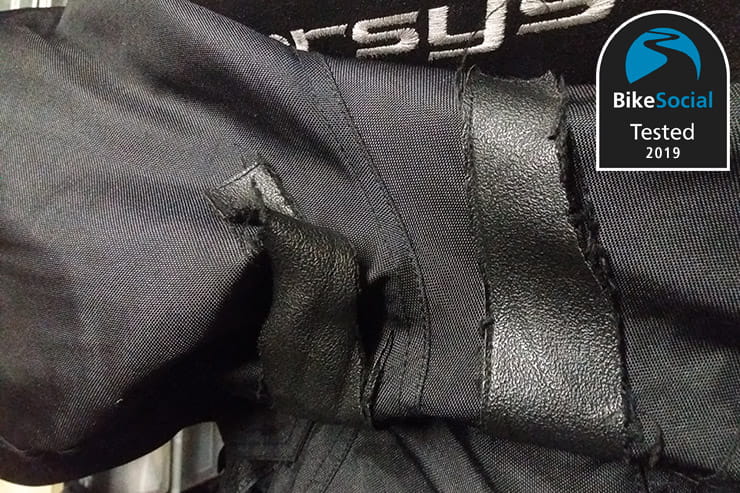 The stitching is fraying in several places

I’ve grown used to having cargo pockets on my biking trousers as a handy space to stash my wallet and phone when not on the bike. But the Duhans have none. They have zip pockets, but they’re mounted a touch too high, which makes access difficult, and if you have keys or similar in there they dig into your thigh. Annoyingly they’re a bit too small for modern phones and chunky wallets. However, I have ridden through some torrential downpours, and on all occasions the contents stayed dry.

The fly is a standard zip, with a hook and loop fastener flap, a popper, and hook/eye closure at the top. I had nothing but problems with all of it. And before you suggest it, the snugness wasn’t to the extent that I burst the fastenings! Cheeky.

After two months, the eye had come off and the popper was too weak to hold the top of the fastening closed on its own. This meant the top had a tendency to come open, but the zip and hook and loop are also poor quality and weak, meaning that I was always a bit self-conscious that if my jacket rode up then my underwear would be on show! I was eternally grateful for the braces that came as standard.

On a plus side, the zips on the legs are really good, and never get caught on the lining. 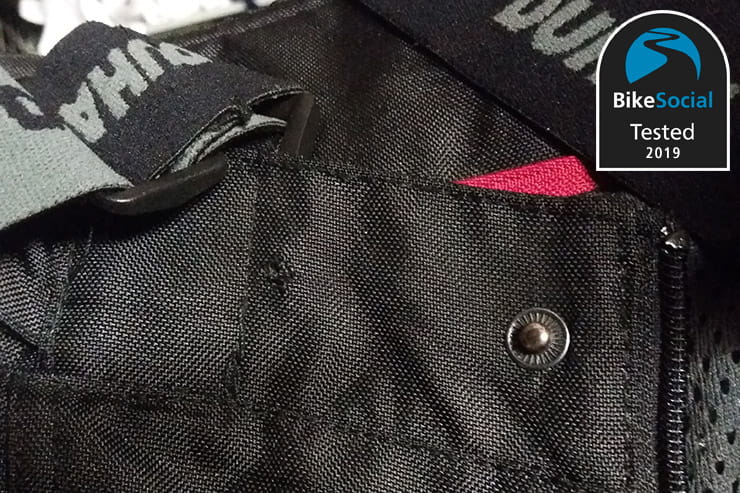 The waist has a hook and loop fastener belt (I’m intentionally avoiding the use of the Velcro trade name), which gives about three inches of adjustment (not that I needed it) and proved handy considering the fastening issue mentioned above.

I wore the Duhans through the height of our summer. As they’re a bit thinner, they felt pretty good; my legs never felt clammy, and if I popped my feet onto the crash bars of my Versys I got a pleasant draught up them.

There are vents, which have an unusual hook and loop closure that’s held open with a popper, but they’re pretty ineffective. Even stood up on the pegs, I couldn’t feel any discernible increase in airflow. 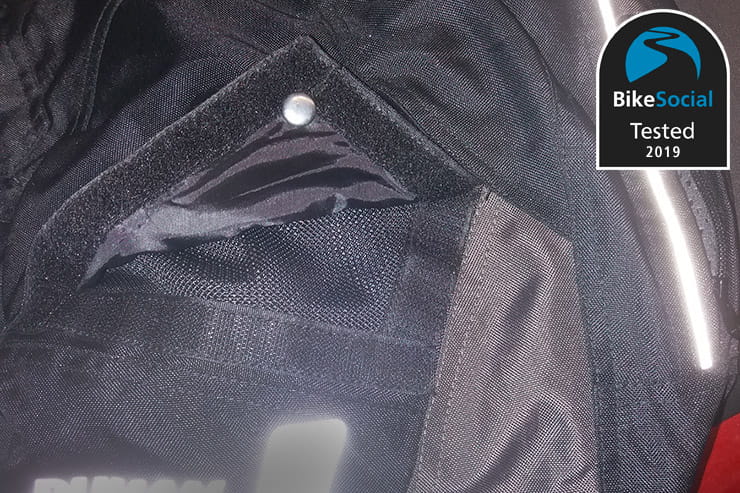 The vents don’t seem to do much

With the weather turning a little cooler I zipped in the supplied thermal liner. And very good it is too. It has a luxurious plush feeling that kept the autumn chill off my legs very well. It’s surprising how effective it is, considering its lack of thickness; it never felt cramped or restrictive in any way.

Any draughts getting past the hem were caught by the liner and didn’t make their way further up my leg – the only flaw of my old trousers. So, cool in summer, warm in winter, which is something I look for in my riding trousers.

Another positive point; they didn’t disappoint. Even in a torrential downpour, the Duhans never leaked a drop, which is something that not all low-price trousers can boast.

Duhan claims to be China’s biggest and best manufacturer of bike clothing, but Wish’s claim that these were reduced from £600 is laughable; I even feel a bit short changed paying £76 if I’m honest.

Yes, you can wear them all year and they’re waterproof, but they just feel cheap. The quality of manufacture and materials isn’t acceptable and the flimsy armour does not inspire confidence. I’d advise looking elsewhere, as there are other trousers available that are of a much higher spec for the price. Like the RK Sports Storm trousers I now miss! 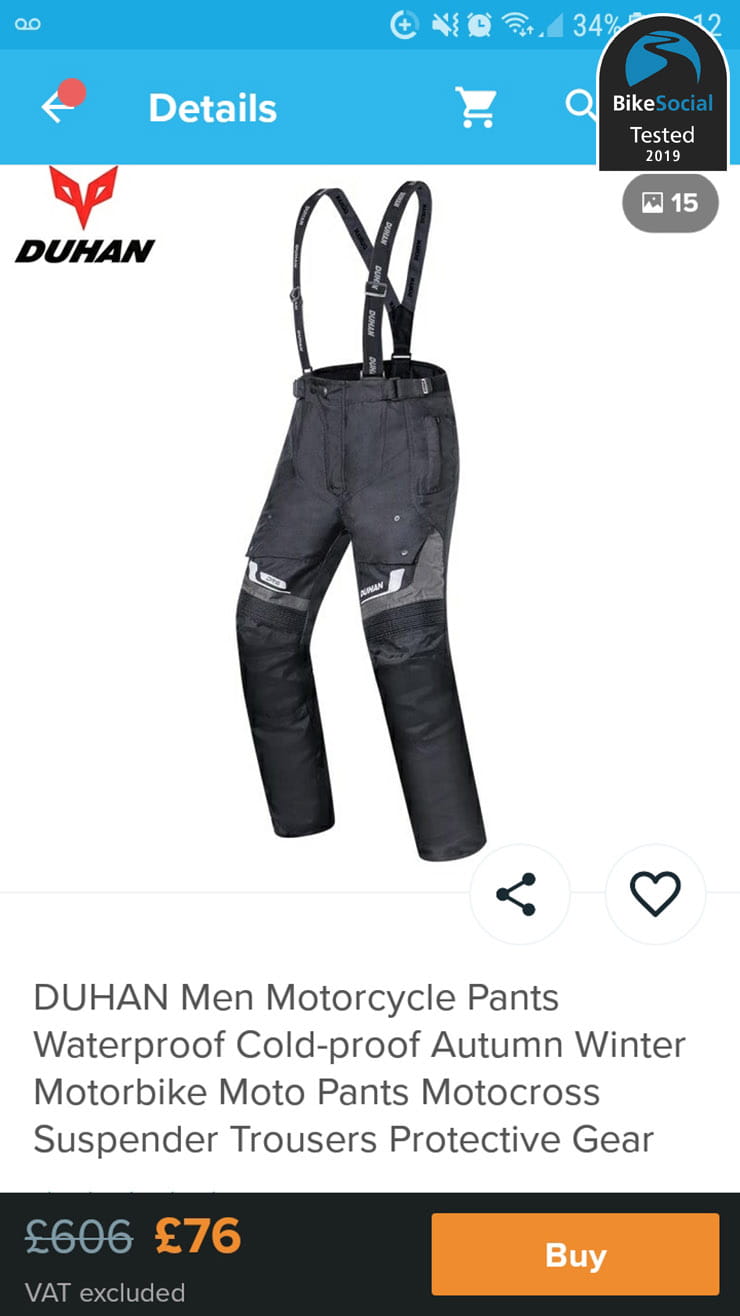