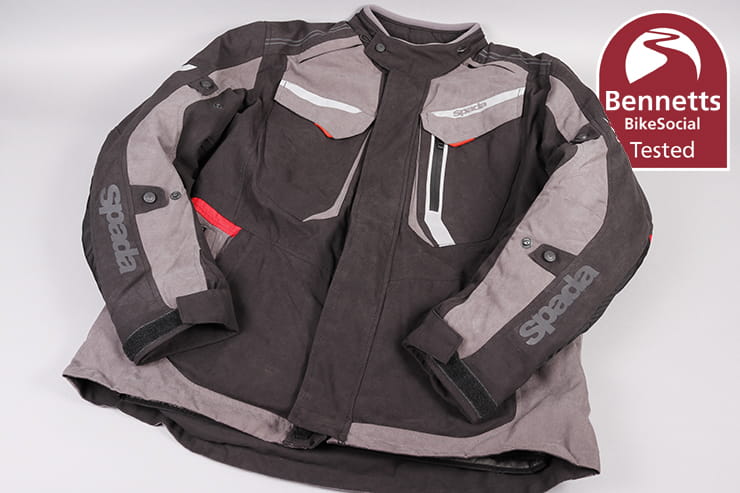 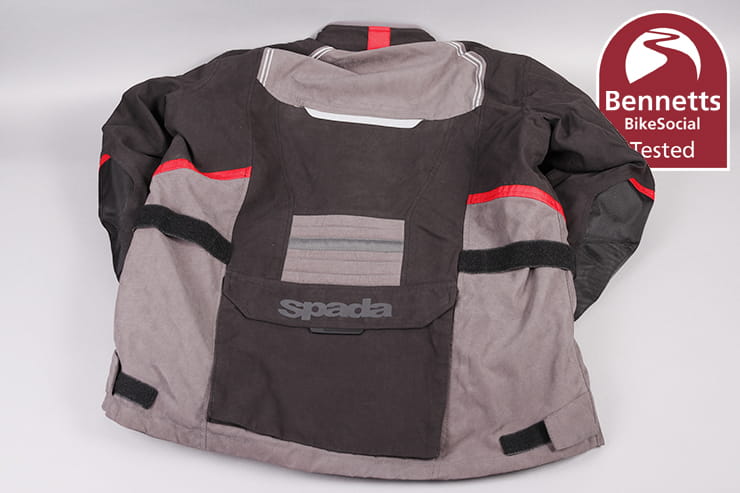 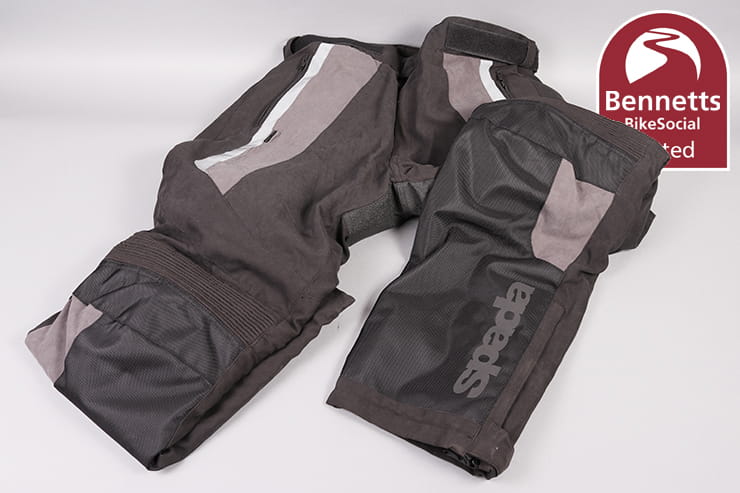 The Spada Marakech is a relatively budget-friendly jacket and trousers that promises great features for its price, especially given the discounting below retail at the time of writing. We gave a set to Jon Mansfield, a motorcycle instructor at 1on1 Rider Training and a Bennetts Rewards member who’s worn them for more than 5,000 miles on back roads and motorways for work and leisure, riding on everything from his own 1990 Kawasaki ZZR1100 to an ER6, scooters and a Grom…

The outer shell of the Spada Marakech jacket and trousers – a ‘Densiweave’ high density polyester twill with a matt brushed finish – is fantastic; it’s lovely and soft and has a quality feel unlike anything I’ve had before.

It’s wearing extremely well, with no problems on any of the stitching and no signs of any fraying. There’s a slight fading to the colour, but it’s still excellent.

Fit is very subjective, and while the trousers are a little long, that’s down to my proportions more than anything. The jacket’s extremely comfortable, and I do appreciate that, in my usual size XL, I’m able to get a fleece underneath.

My only disappointment was the loop that holds the collar open pulled out the first time I tried it. This would be covered under Spada’s two-year warranty, but I didn’t bother returning it as I tend to ride with it closed anyway. 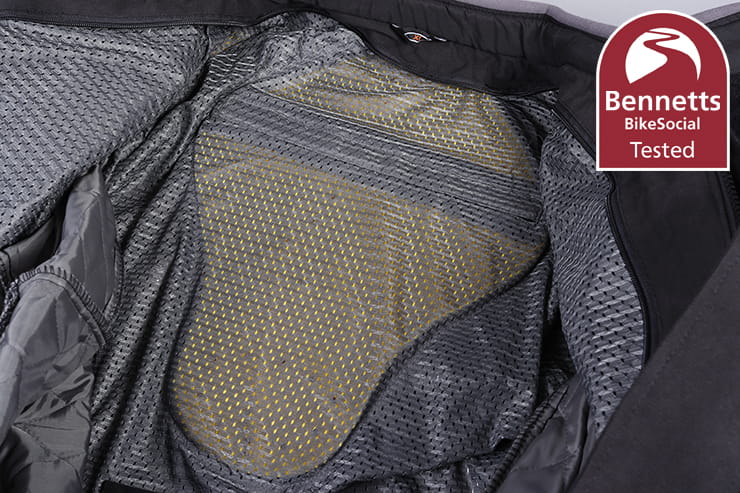 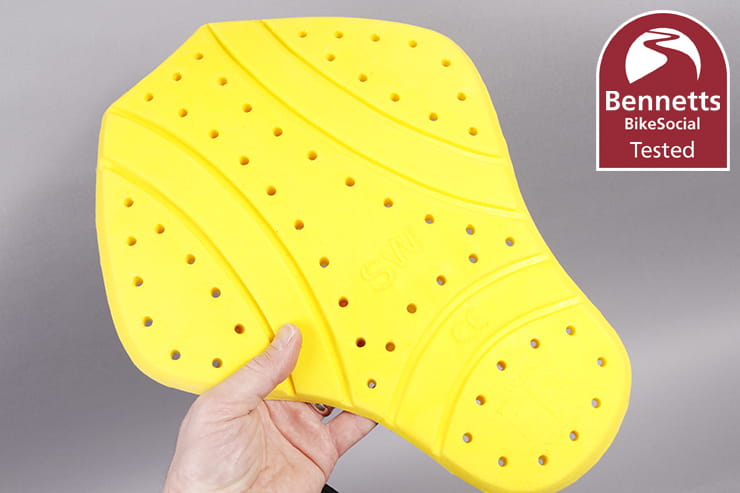 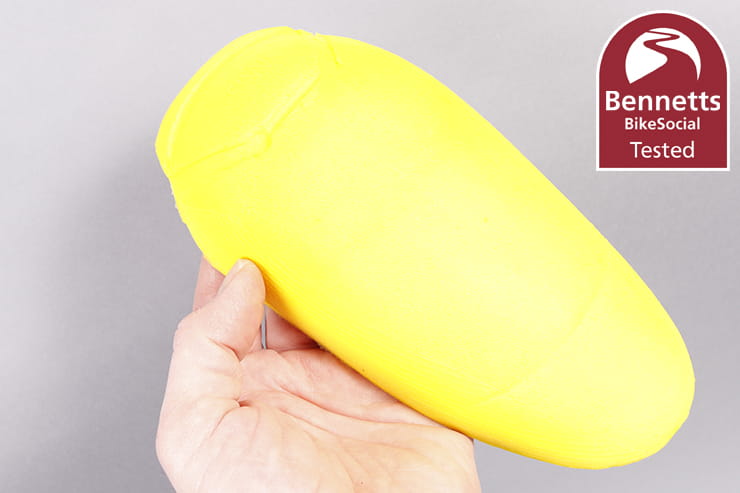 With a back protector included in the jacket (as well as elbow and shoulder armour) along with hip and knee armour in the trousers, the Spada Marakech is well equipped. It’s Level 2 armour, which is impressive as it’s the higher of the two ratings, though it could be a bit bigger to offer more coverage. Still, it sits in place well so I’ve not found it an issue.

Being very soft feeling, the armour’s really comfortable – it’s certainly easier to wear than many others I’ve had, especially in the budget market.

There are also some neat reflective details on the jacket, which can really help, especially on grotty winter evenings.

The Spada Marakech is not CE approved as PPE. This is very unusual to find now, though I did receive this to test at the very start of 2020 and it was in production before then. The shutting down of training centres at the start of the first national lockdown, then the following rush for training has meant that my review has come much later than I’d have liked, so apologies for that. However, given the lack of certification, it’s not possible to comment on the abrasion resistance, burst strength or tear resistance of the materials used in the jacket or trousers. 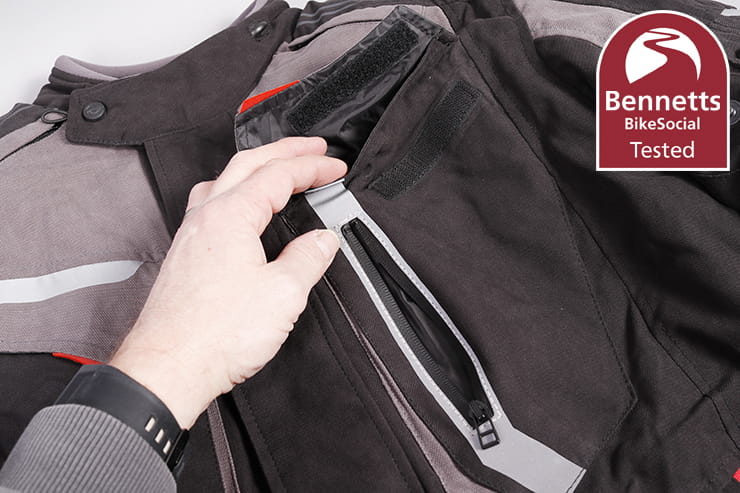 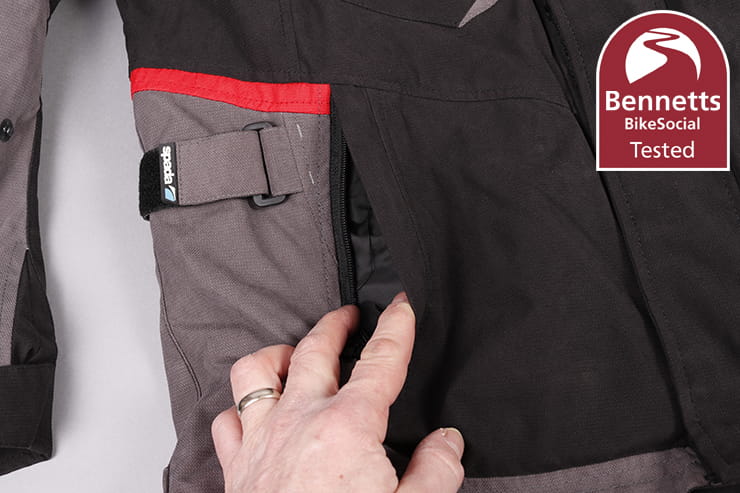 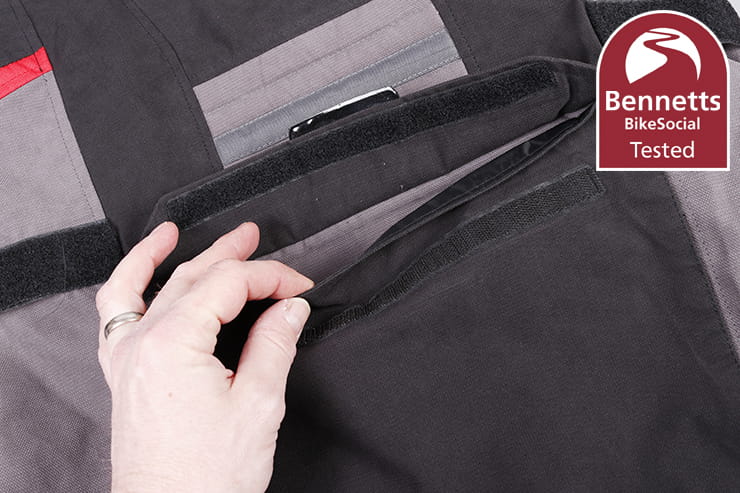 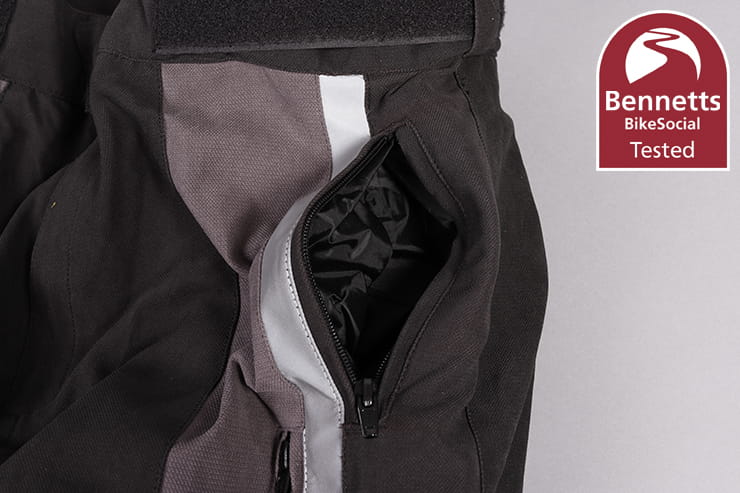 There are five front pockets on the jacket, as well as a rear map pocket. There are none on the inside of the outer shell, though you do get two in the removable thermal liner. They’re all a good size, especially the outer pockets, which are relatively deep. 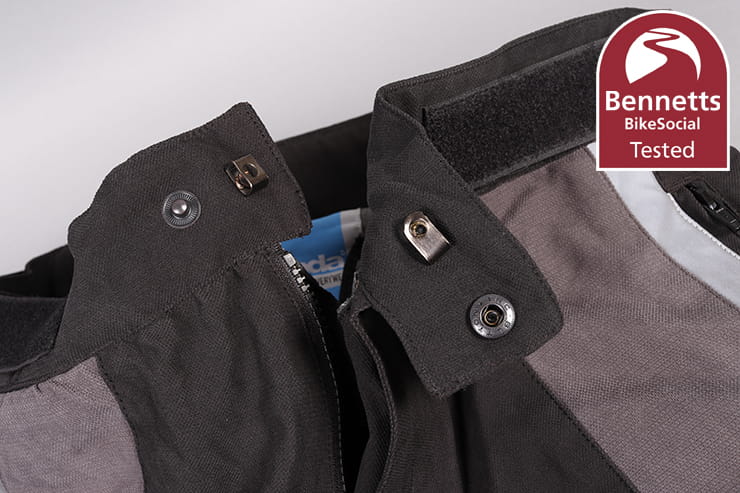 The trousers have a zip and popper closure, along with a folded metal catch – they stay shut when done up. The jacket fastens with a good, chunky zip that’s covered by a full-length Velcro-fastened storm flap. Overall, it feels quality. 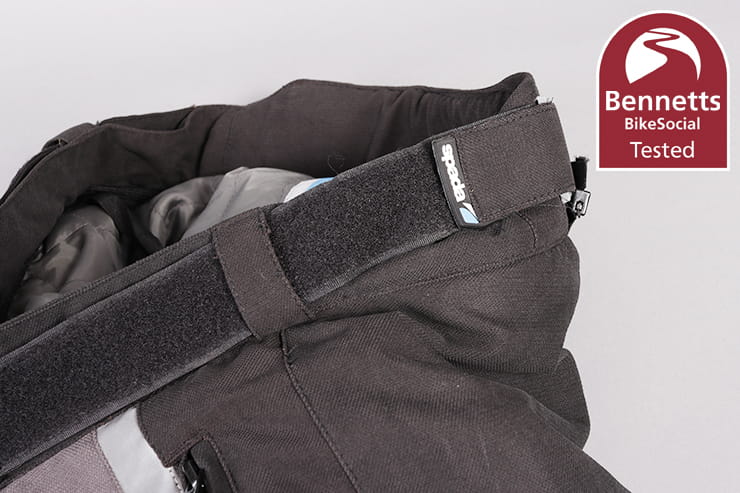 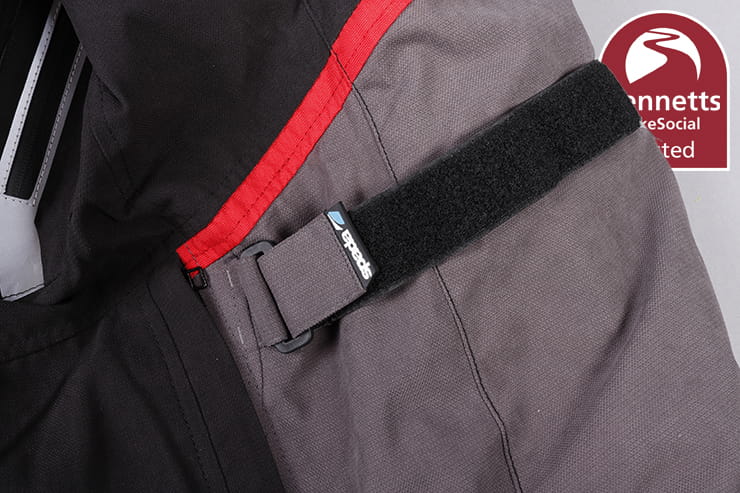 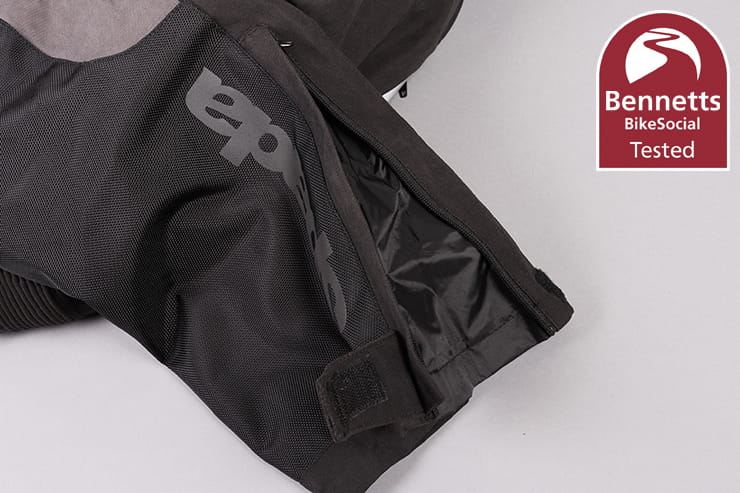 The biceps and forearms have a two-position popper strap, which is useful when removing the thermal liner as I find the biceps can flap a little; popping it onto the tighter of the two draws everything together nicely.

The jacket has a Velcro waist adjuster, with a Velcro belt on the trousers. The trouser legs aren’t adjustable, but the jacket cuffs – while not featuring a zip – do have a reasonable level of adjustment thanks to the Velcro flaps. I wear my gloves over the tops of the sleeves, but autumn gloves should go under no bother; if you wear thicker winter gloves under the cuffs, just check them before you buy to be sure how compatible they are. 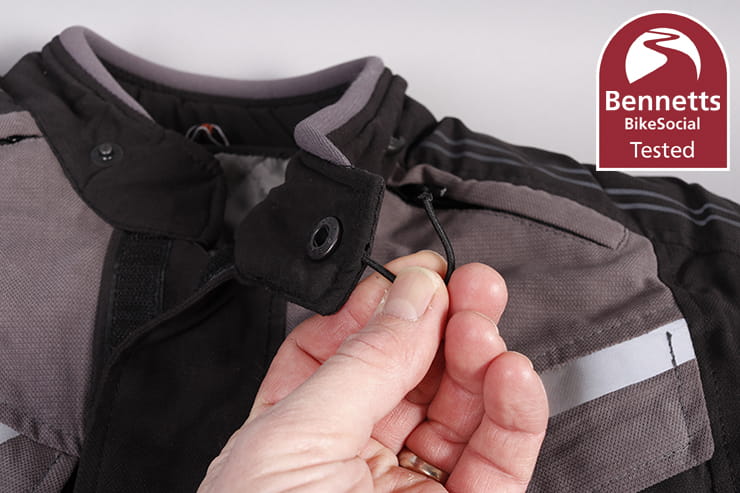 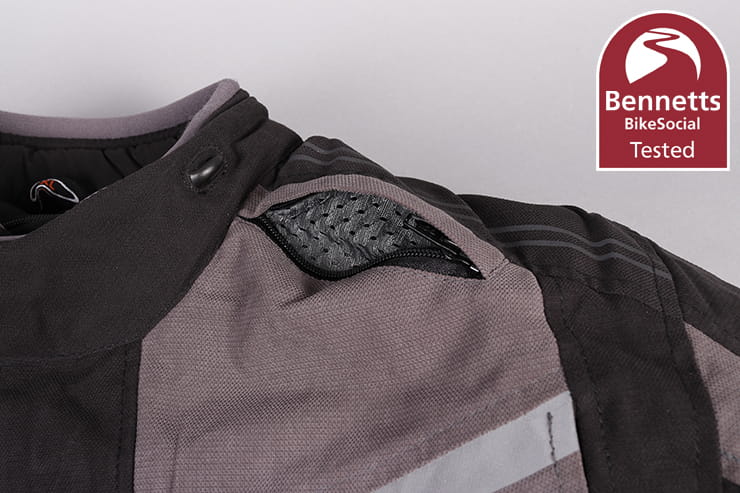 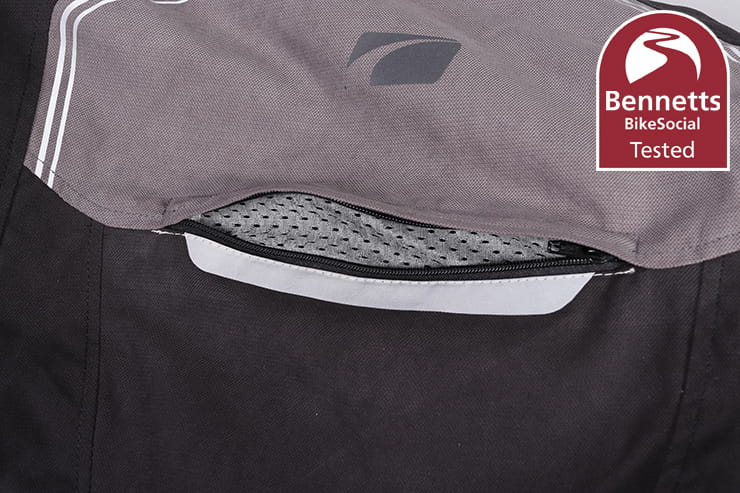 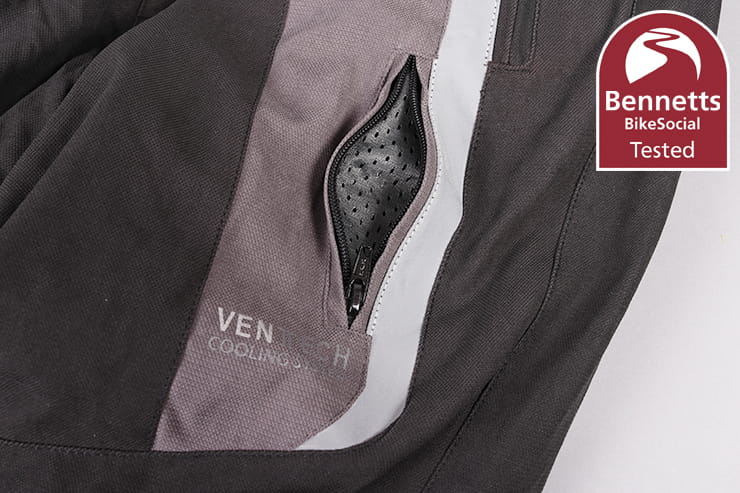 There are two small vents on the trouser legs and two more over the collar bones. There’s also an exhaust vent on the rear of the jacket, but none of these are particularly effective. Really, this isn’t the best jacket for very hot days, but given the price the compromises are more than acceptable. Wearing a cheap technical top – rather than a cotton T-shirt – will reduce the amount you sweat in the peak of summer. 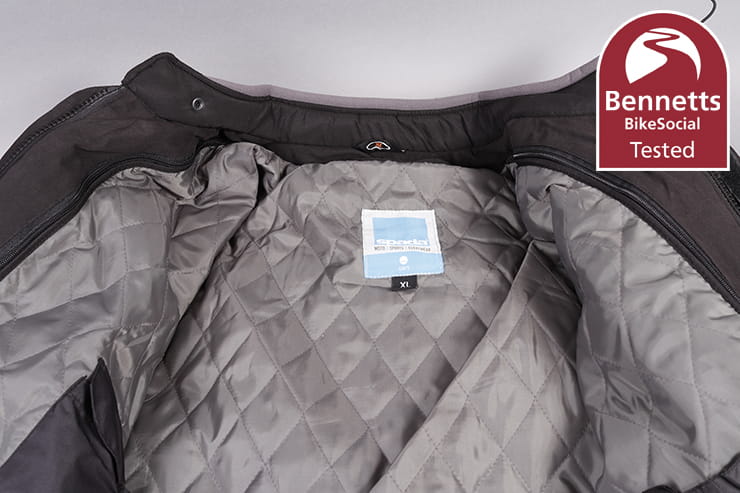 The Spada Marakech isn’t at its best on the coldest of days either – the removable thermal liner is okay, and it’s wonderfully comfortable and soft (like a little duvet), but in deep winter you’ll need to layer up. Fortunately though, I can easily get a fleece underneath, so I’m more than happy. 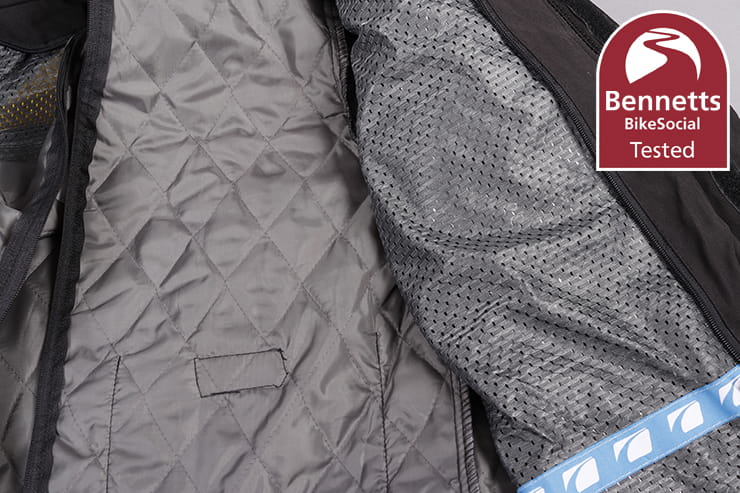 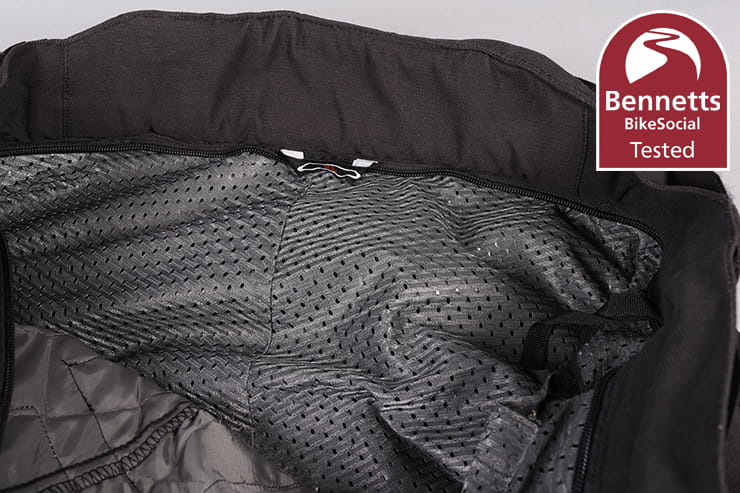 With the thermal liner removed, the outer shell’s mesh is still very comfortable; it’s not the 3D mesh you find in some high-end kit, but it’s far from the sticky, sweaty material of old.

The Spada Marakech is fine in showers and shorter wet rides, but the pockets do leak and the arms get wet. I didn’t have much trouble with water getting up under the front, which can be an issue on some gear, but I wouldn’t want to be out all day in the rain with this.

In 30 years of riding, I’ve only once worn textiles that were completely waterproof, but they were so hot I just couldn’t get on with them.

I always carry a cheap waterproof oversuit for the worst weather, so I just pop that on over this kit too. 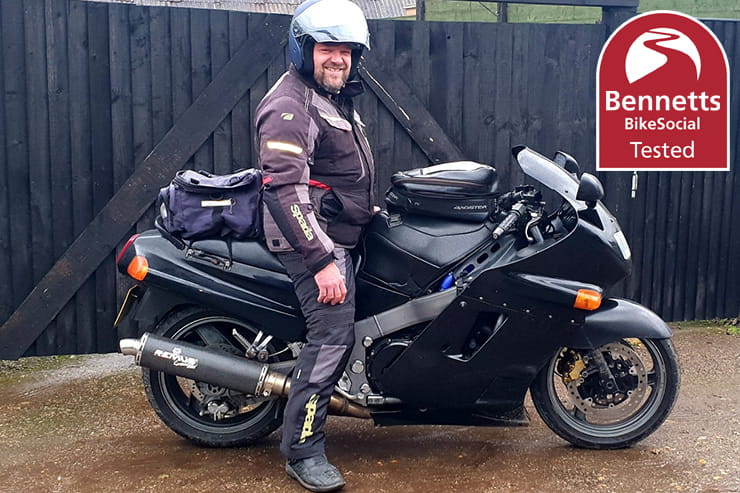 The Spada Marakech is a bit too hot in the peak of summer and a bit too cold in the very depths of winter, but with the right undergarments – be that a technical top, fleece or a heated vest – it will work all-year-round.

As I write this I can see the jacket available for less than £130 and the trousers for £105, though sizes are becoming limited. If you’re on a budget it’s a brilliant all-rounder, up there with the very best when it comes to value for money. It's among the last kit on the market to not be certified as PPE, but I'm very happy with the construction and it's certainly holding up well with my use; I’d not have been surprised to have heard the Marakech cost twice as much.