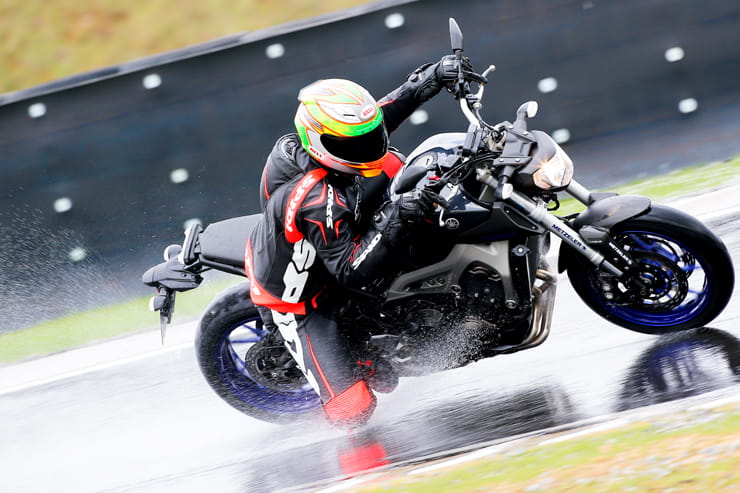 I have been testing the Spidi Track Wind Pro one-piece leather suit for 18 months, and I have covered just over 3000 miles in it.

It’s made in the Vicenza leather district using 1.2/1.3mm cowhide and stretch materials, along with neoprene inserts and Multitech/Biomechanic/Forcetech protectors. It comes in two eye-catching colours and I think it looks great - maybe because it’s made by those stylish Italians.

There are no sliders on the shoulders or elbows, which is something I’ve grown accustomed to. However, the shoulders and elbows are packed with armour and the Track Wind Pro also has adjustable CE-certified armour at the knees and hips.

This is only the second suit that I’ve seen that offers hip protection. I’m a big fan of hip protection because I don't think I've ever come off a bike without my hips bashing the ground, which isn’t nice. The inside of the armour is also well padded with foam, which makes it comfortable.

The rest of the suit is similarly comfortable – the legs to fit like a… glove and the extra-large stretch panels over the knees make it easy to bend the knee on the bike, providing unrestricted movement in all the right places.

The neoprene cuffs give a comfortable fit and a low, tapering profile to the cuffs. The Velcro fastener is quite wide and gives good closure at the wrist without restricting gloves. Gloves fit over the cuffs with ease. 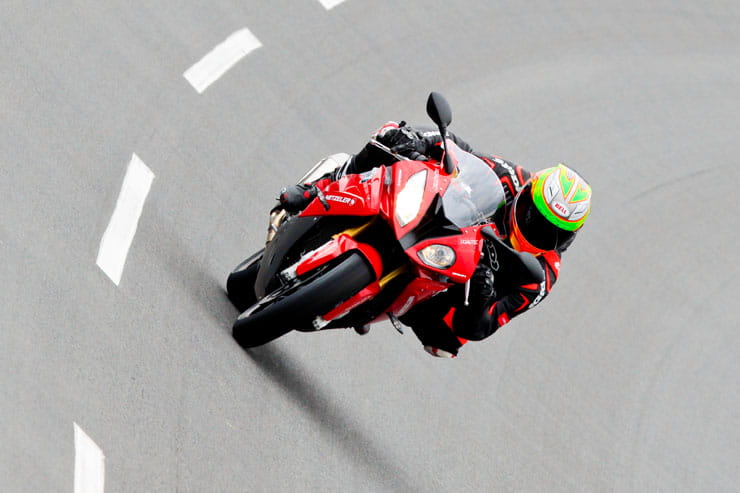 I found there was a little surplus material at the backs of the shoulders – it wasn’t something I noticed when standing up but I did become aware of it on the bike with my hands on the bars. I think it’s due to the extended stretch section on the back that extends all the way to the top of the shoulders because elsewhere, the fit was unaffected when I was riding.

The first time I wore this suit I was riding in the cooler ambient temperature of 14 degrees. I wore a base layer and was pleasantly surprised at how warm the suit was. There are perforations to allow for airflow but they are small and I didn’t feel any great rush of air through the suit, although Spidi says this is a Northern Eurpean suit, which gives a clue to the climate its designed for. Obviously this is an advantage in cooler weather or in winter (or just in a typical British summer) but if you’re looking for a suit to wear on idyllic Spanish track days, go for a lighter base layer or you may want something with more perforations. (Spada offer a custom option)

The aerodynamic speed hump on the back can double as a water container, and although the hydro pack has to be bought separately, there’s a built-in hydropack straw holder at the edge of the collar.

The inside edge of the collar has a soft suede-like leather lining with a neoprene panel at the back. The neoprene is low profile under the back edge of the helmet which means it doesn’t get in the way and I could feel it yielding when it came into contact with the back of my helmet. The fit around the neck is also comfortable and snug enough not to let loads of air rush in.

Inside, there’s a high quality a removable washable lining, which is actually easy to detach, so I've got no excuse for this to become smelly. The lining attaches via zips and Velcro and didn't take me long to remove. 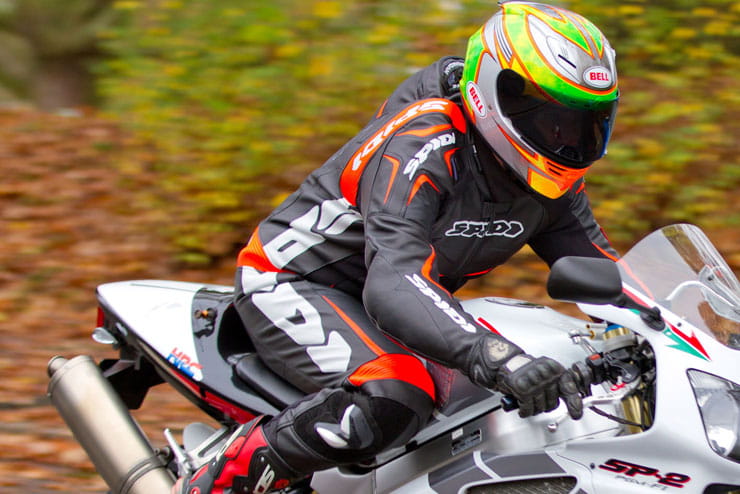 Inside pockets on leather suits usually close with a zip or Velcro. The latter always tends to fold over and stick to the lining, which is annoying because eventually the rough edge takes its toll on the lining. The Track Wind Pro has two neat little poppers, which prevents this problem. Over time the poppers have become more fiddly as the fabric has formed folds.

You can add a built-in back protector as an option but I always wear a separate heavy-duty back protector, which fitted under the suit with ease. There’s also a chest protector-ready attachment built in.

The suit fits has got better each time I wear the suit.

This Track Wind Pro has a high level of features to make it protective and comfortable in all the right places. At £849 it’s on par with similarly priced suits and the option of the hydration system will make it more appealing to some people.