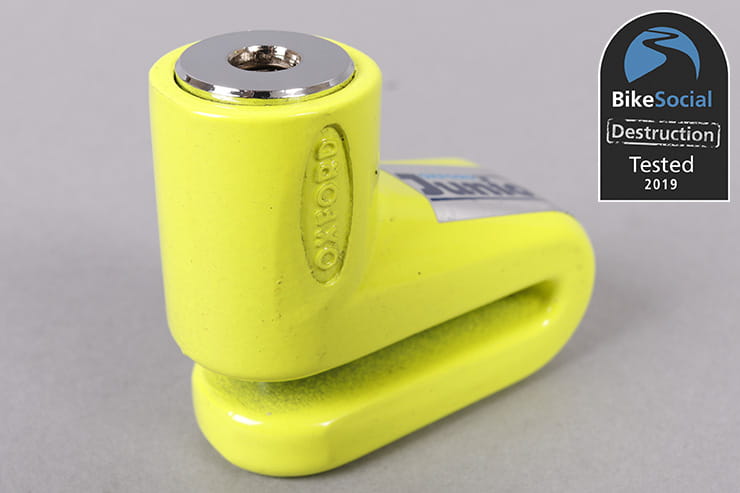 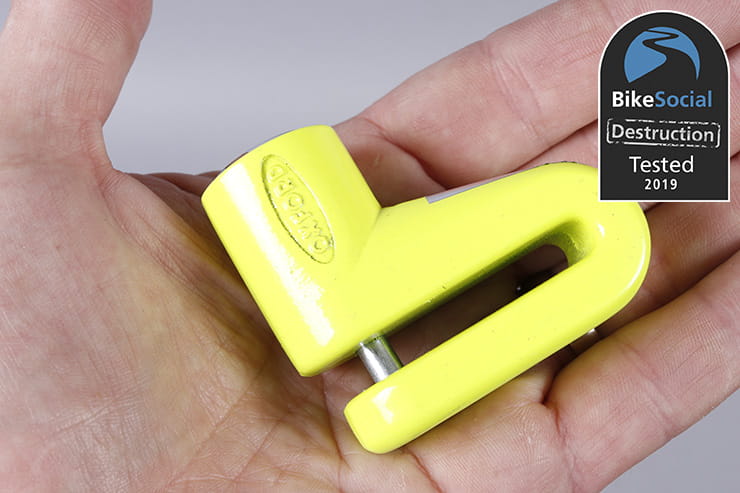 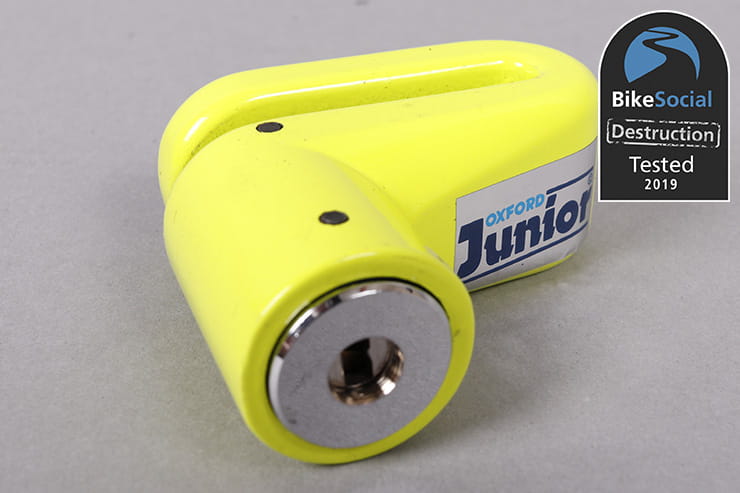 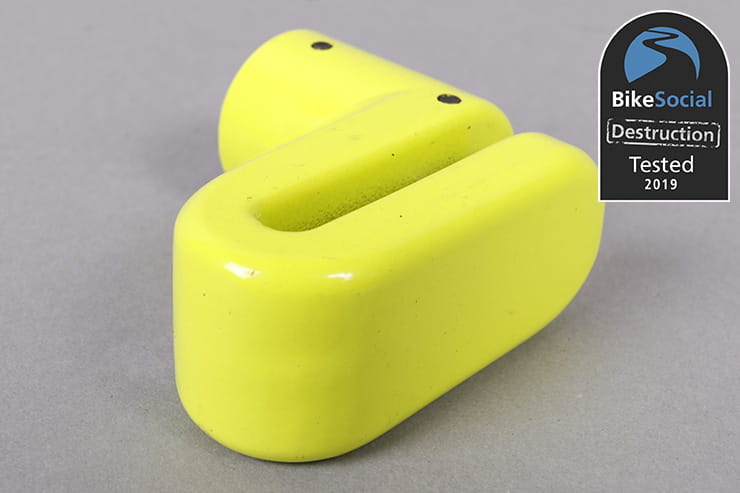 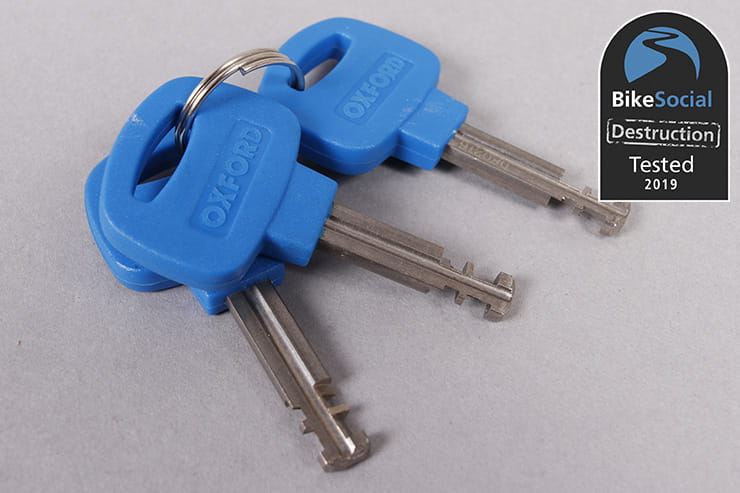 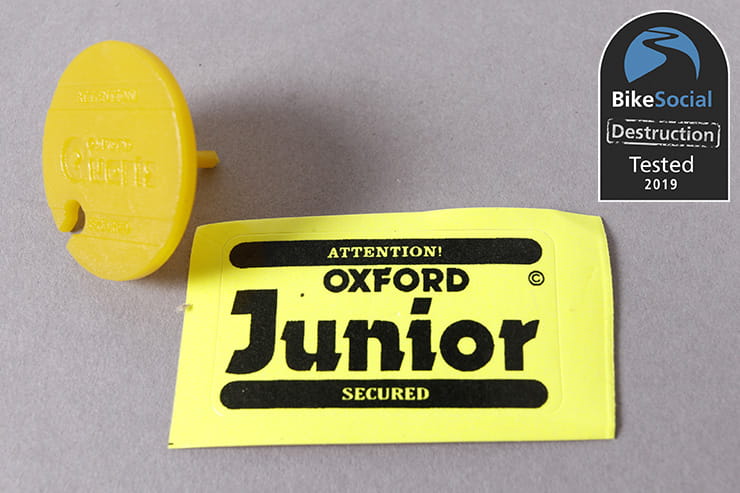 The Oxford Junior disc lock is the smallest security device we’ve ever had on review here at BikeSocial. It’s made of zinc alloy with a hardened steel locking pin that’s 5mm in diameter, making it fit the small ventilation holes on most scooters’ brake discs, which often struggle to accept a larger motorcycle-specific disc lock or a mini-U lock.

The Junior will also fit most motorcycles, and while we’d always recommend care when putting anything in your pockets while riding, this Oxford lock is so small that there really is no excuse not to always have it with you.

It’s supplied with a warning sticker and a plastic plug that you can poke into your ignition, to remind you that the lock is fitted and avoid riding away, potentially damaging your machine if it’s not removed. 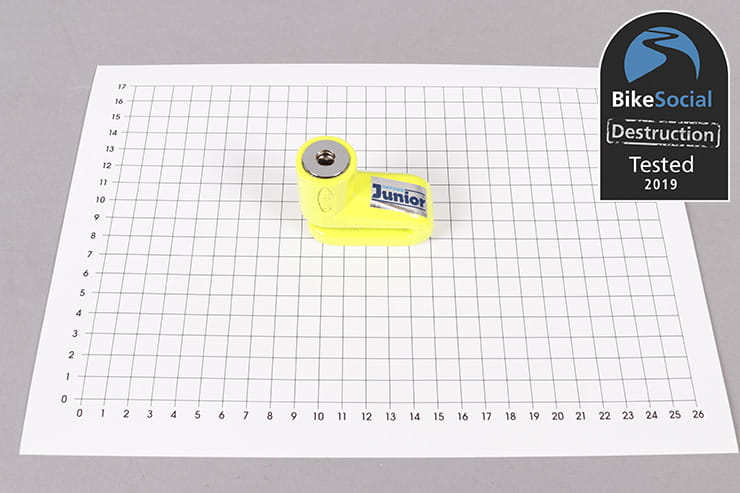 This really is a tiny lock, weighing in at just 259g. Besides being easy to store under even the most compact bike seat, it’ll tuck out of the way on a brake disc on the majority of scooters and motorcycles.

Turn the key in the barrel and it pops open – you can then remove the key, pop the lock over your disc and simply press the mechanism down to secure it. It couldn’t be simpler, but as with any lock we’d recommend trying to fit it somewhere as inaccessible as possible – the trickier it is for you to fit and remove, the harder it is for a criminal to attack 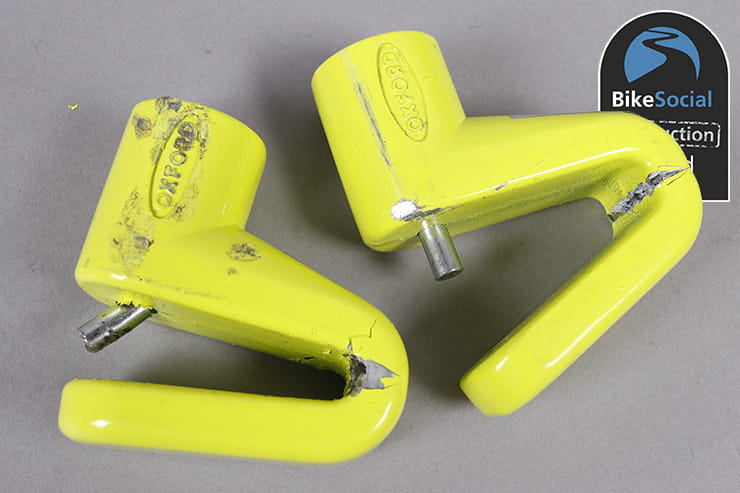 It’d be foolish to expect the highest levels of resistance to attack by a knowledgeable and tooled-up criminal, but the Oxford Junior is surprisingly strong. A pry bar attack is fairly quiet, and while it will defeat this small lock – cracking it at the bend in the body – it takes real force and a good angle is required to get the leverage; if you can position the lock between suspension and brake parts for instance, it’ll be much harder to attack (assuming the machine can’t be rolled to gain easier access).

Equally, a lump hammer will show the limitations of the small locking pin required for scooter-compatible disc locks, but it takes several good strikes; fit it thoughtfully and a crook won’t be able to get the necessary swing.

An angle grinder will of course go through the body of the lock, but this is noisy and even if you had a larger lock, crooks will cut through the disk if they think it’s easier. Angle grinders are used, but they’re not as common as Facebook would make you fear.

This is not the strongest way to lock you bike, but equally, while it is the smallest device we’ve tested, it’s certainly not the weakest.

No disc lock will stop a scooter or motorcycle being lifted into a van, but one of the biggest problems currently is machines having their steering locks snapped (it’s easy) and then being pushed away, usually by a second crook on a scooter. A disc lock provides a simple level of protection that will see criminals look elsewhere before committing to a tooled-up crime. Add a cover and your powered two-wheeler becomes even less of as target.

The most secure way to lock any bike is with a decent chain and lock – you can read our reviews here. But the best lock is the one you have with you; the one you always use. The Oxford Junior should be considered a minimum, but like other devices, it’s a lot better than using no security.