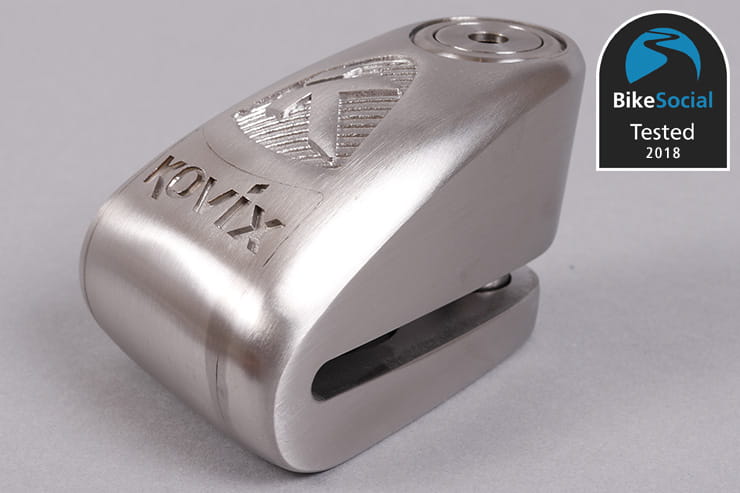 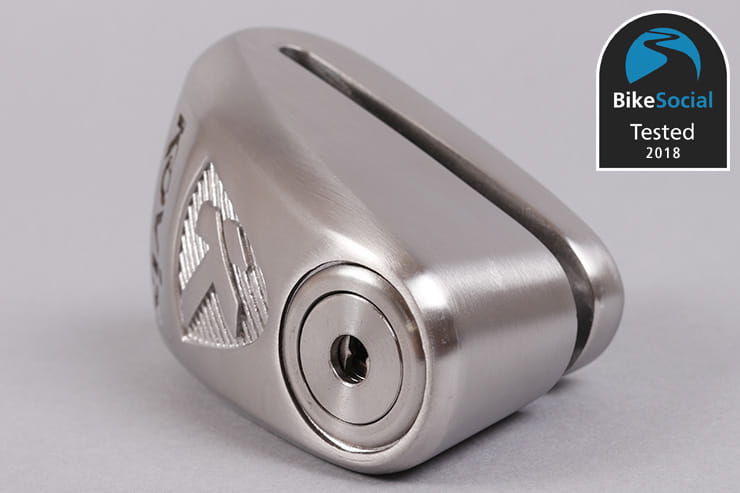 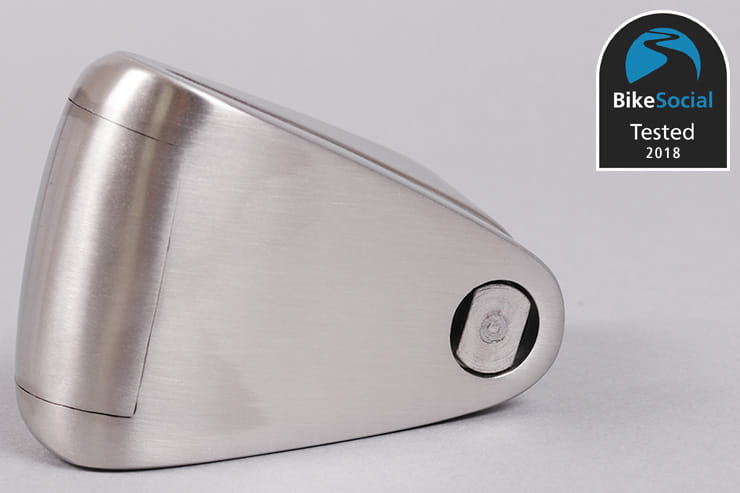 The package includes three keys, a key number tag for copies, a CR2 battery and an Allen key for replacing the small 3V lithium cell, which typically costs less than £2.50. 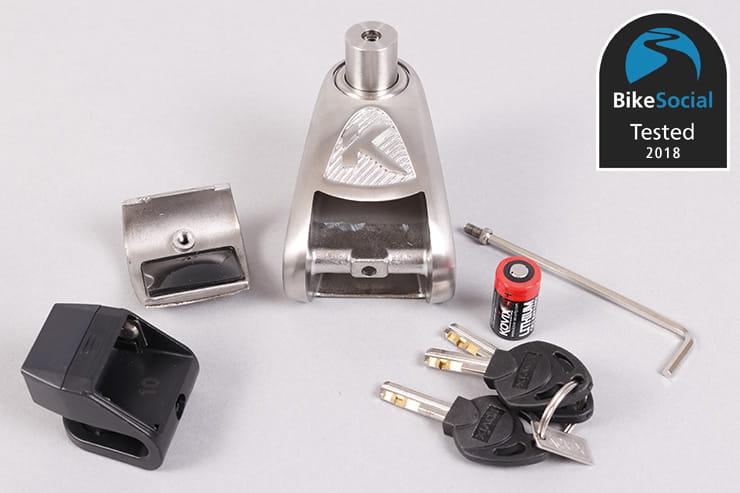 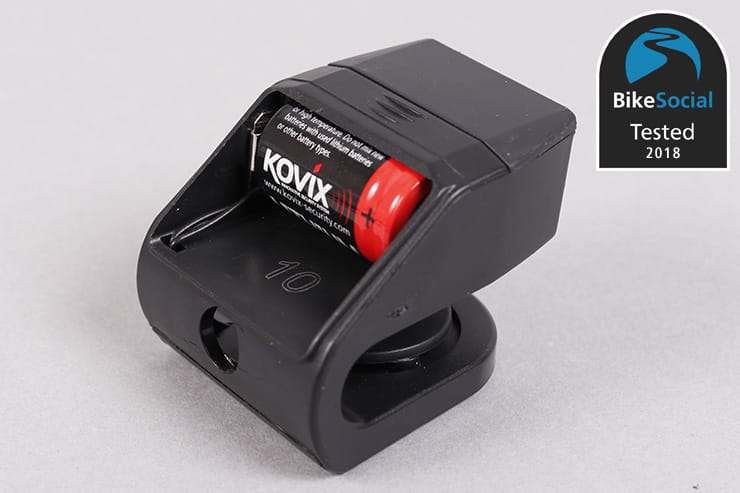 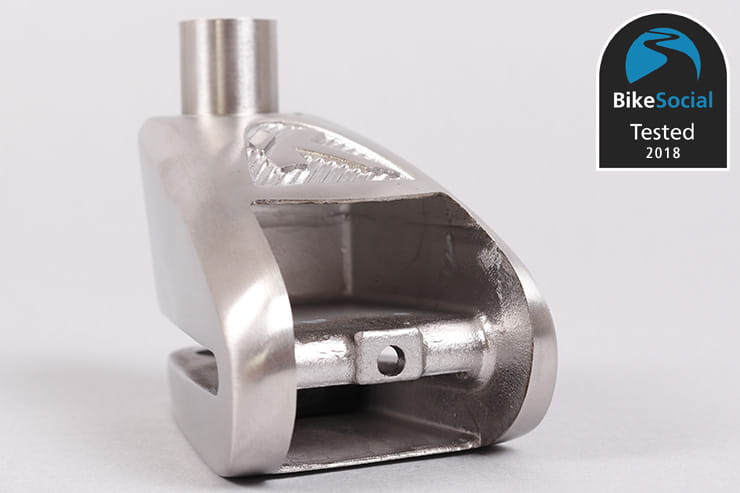 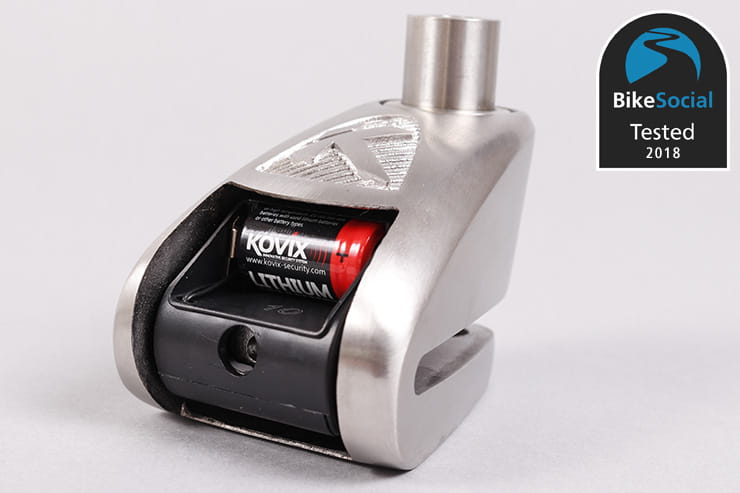 Weighing 622g and being quite compact, the Kovix lock is pretty easy to carry on many bikes. It’s a shame there’s no mounting bracket supplied, but it should fit under most seats; just don’t be tempted to carry it in your pocket, as like any lock it could cause injury in an accident. 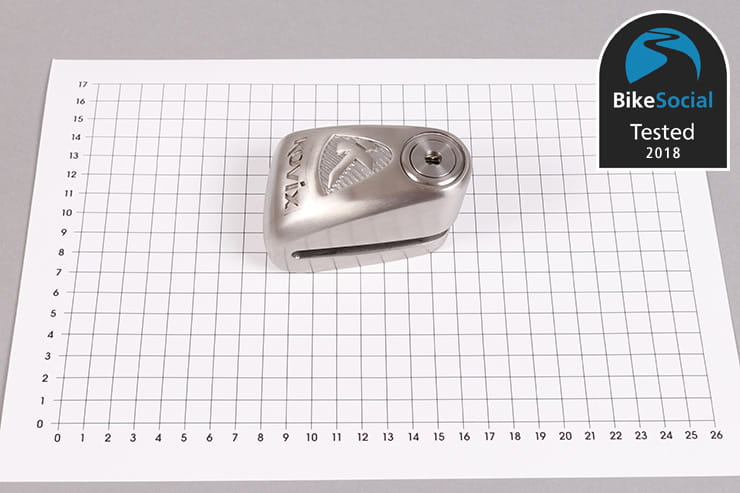 The lock’s compact enough to fit under most seats

With such a large, solid locking pin, the Kovix won’t fit all scooters, so do check the size and position of the holes on your brake disc if this is what you want it for. It’ll fit pretty well any motorcycle though – just open the locking pin, slide it onto your disc and press the pin back down. As the disc goes into the slot the alarm automatically arms with a single loud beep.

Any movement while the lock is in place will cause a series of beeps before the siren sounds – you’ll likely get a few beeps before you take it off, so don’t park under your neighbour’s window if you’re leaving late at night!

If you want to disable the alarm function, just slide the lock back off then on again, when it’ll beep twice, indicating the alarm’s disarmed. The problem is that it’s not an intelligent system – it simply works by arming with the first slide on, disarming with the second, so when you pop the unit on the next time you use it, it’ll go to the next mode. For instance, on day one you’ll put it on and it automatically arms. Take it off, put it away, and the next day, when you put it on again it turns the alarm function off, so you need to notice the two beeps, slide it off and slide it on again. It’s no great disaster, but if it only disarmed when taken off and on again within a five second window for instance, it would be more useful.

The device’s motion sensing is very good, triggering if the bike is tampered with, or you get on and forget it’s fitted! It’s also not prone to false alarms when rattling around in your luggage – something I did find with some previous products of a similar design.

The 120dB alarm is loud, but not painfully so, even when triggered in the garage. Being a solid lump of stainless steel, it’s understandable that it’s not really loud, but the warning beeps do seem more piercing than the siren. Ultimately, as a first line of defence, the alarm function is useful, if not the loudest. 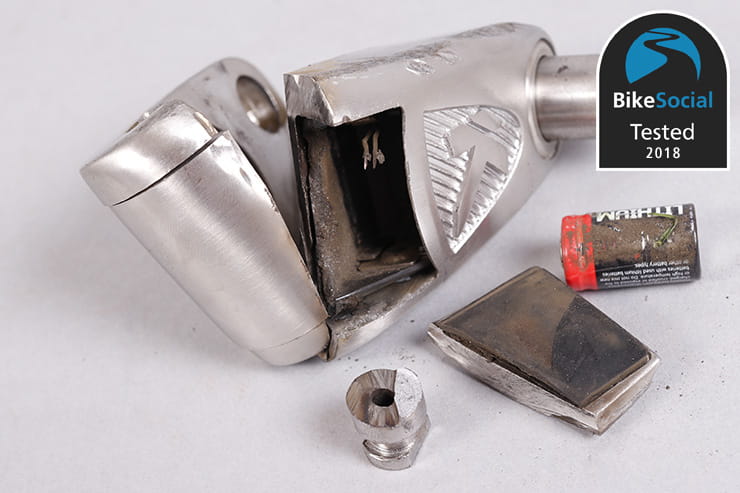 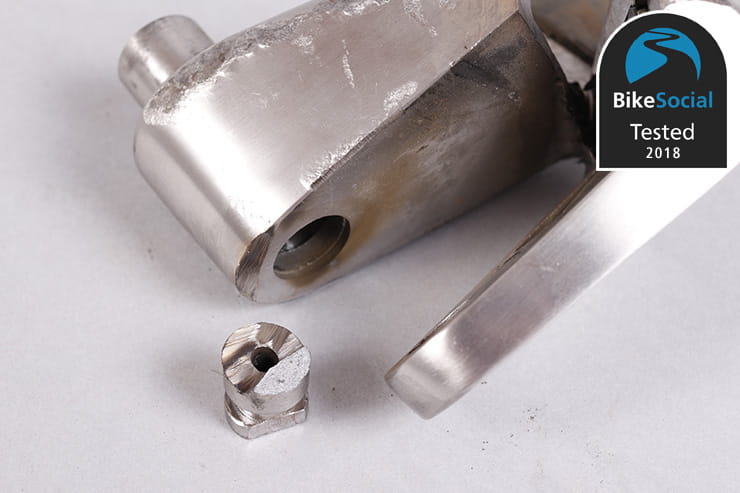 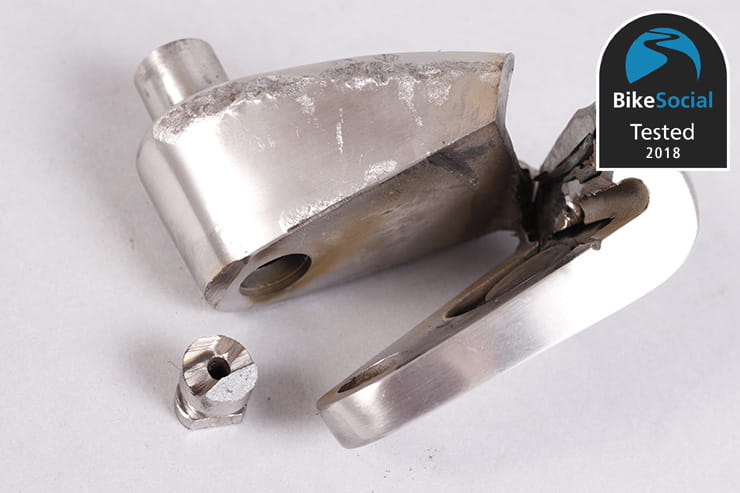 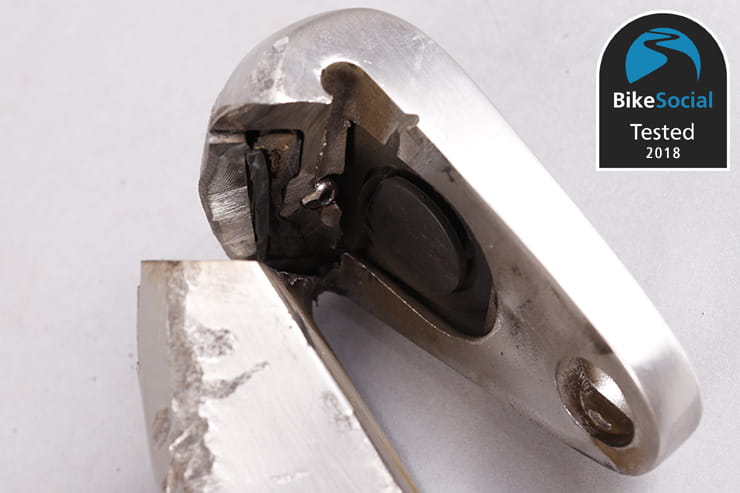 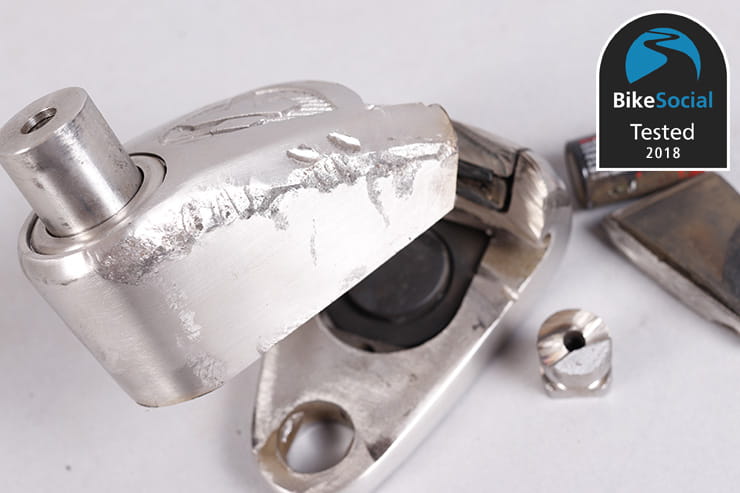 This thing is tough. It’s completely resistant to a lump-hammer attack, pry-bars won’t shift it, and even an angle grinder attack is very difficult. The locking pin is very hard to reach with a cutting disc, and the body is so thick as to be extremely hard to attack – this thing took longer to get off the bike than any other lock I’ve tested, including the thickest 22mm chains.

That’s not to say it’s unbeatable though – sadly crooks are happy to cut a motorcycle’s brake disc and still ride it away, so if they are carrying a grinder, this will be the more likely form of attack. 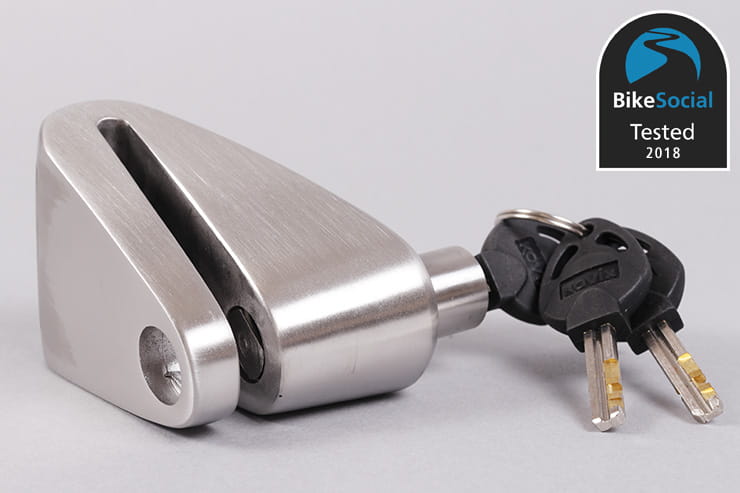 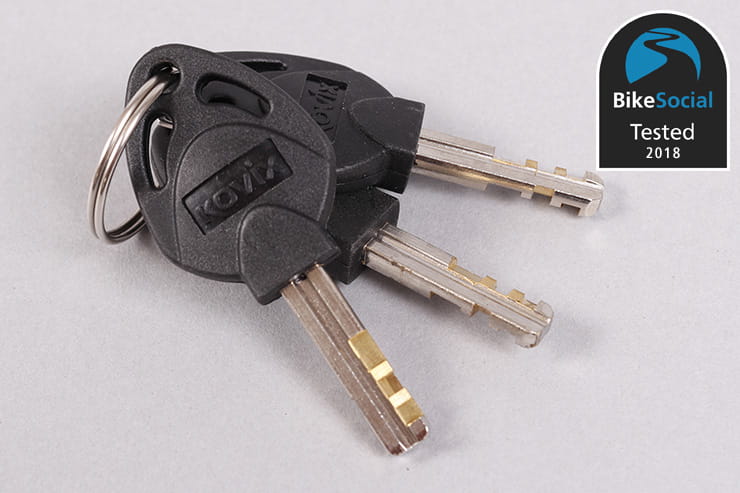 Needless to say, a disc lock won’t stop your bike being picked up and slung in a van. But it will seriously deter the ped-pushers, who use stolen scooters to push a bike away once the steering lock’s been smashed. Carrying an angle grinder takes the crime to another level, and while it’s all you see on social media, it’s not the most common form of attack. And with this disc lock, they’re also going to have to ride with dangerous brake disc.

If you need a quick, convenient and tough disc lock that’ll remind you it’s there when you ride off, the Kovix KAL14 is well worth considering