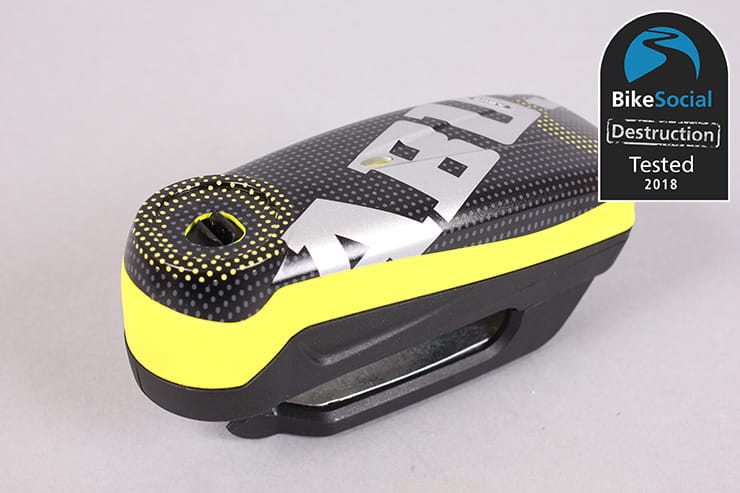 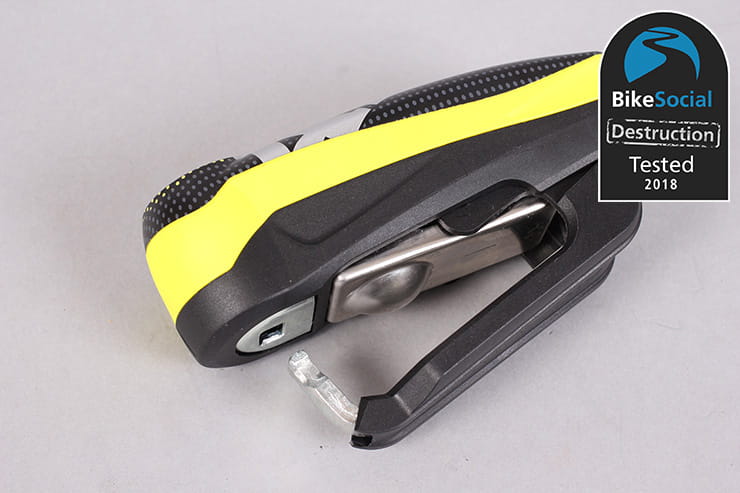 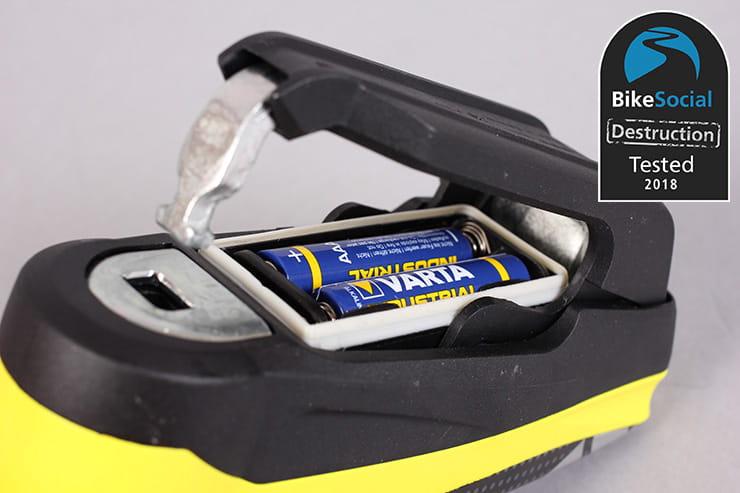 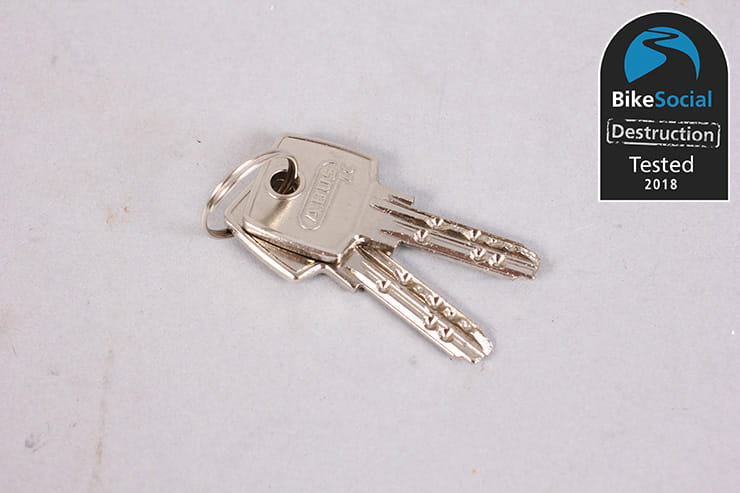 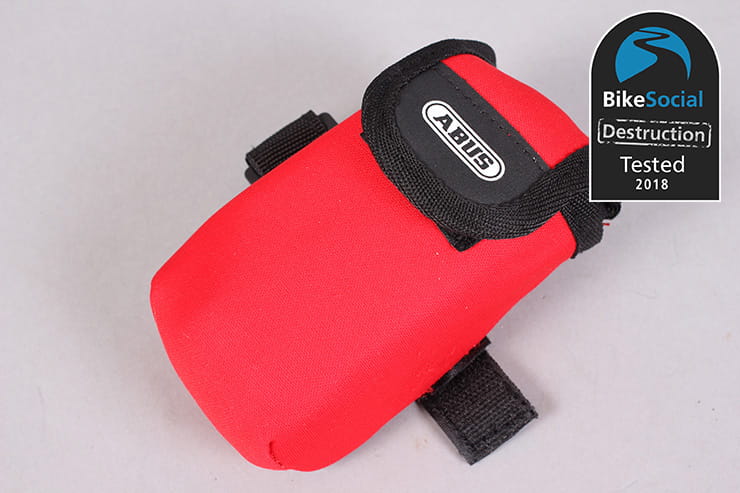 The Abus Detecto 7000 RS1 is a 100dB alarmed disc lock that comes with two keys and a carry pouch with securing strap (though the instructions stress it’s not designed to be fixed to the outside of your bike). The keyway has a sprung plastic dust cover, which doesn’t quite seal fully, but would keep the worst of the muck out. This device is recommended by Abus for securing lower-value motorbikes and scooters.

The Detecto 7000 is powered by two AAA batteries (supplied), which are very easy to replace when the lock’s off the bike. 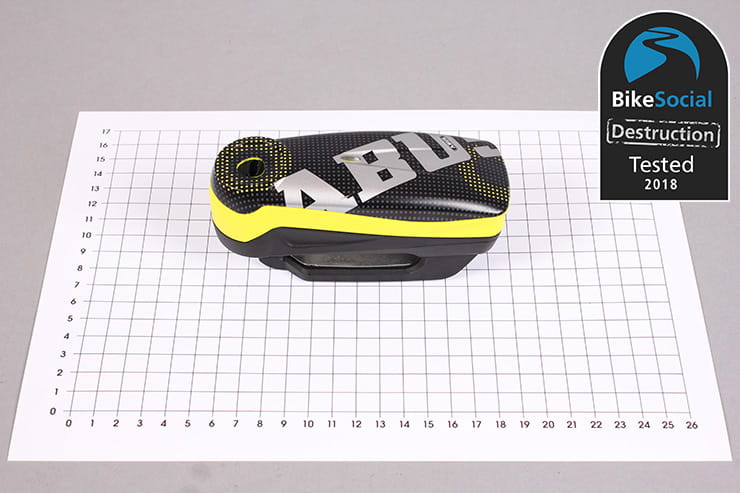 While it’s a relatively large disc lock, the Abus Detecto 7000 only weighs 535g. It should fit under a fairly large number of motorcycles’ seats, and you’re unlikely to have a problem carrying it in the boot of any scooter.

Fitting the Detecto 7000 is easy – just pass it over your machine’s brake disc, then snap the locking arm into place – there’s no need to have the keys in, which saves fiddling around.

To arm the alarm, push the main body of the lock towards the brake disk, which latches the battery compartment and switch mechanism. It’ll beep, and the LED on the top will flash. Disarming is automatic when the key is turned in the lock, releasing both the alarm and the securing arm. This mechanical arming system means that the Detecto won’t falsely trigger when it’s in your bike’s tail unit or rucksack.

The locking pin is 9.7x4.9mm, so won’t pass through the vent holes of a brake disc, which – combined with the size of the body – means it won’t be compatible with all scooters, though we had no problems with our test Piaggio Beverly 350 front wheel. 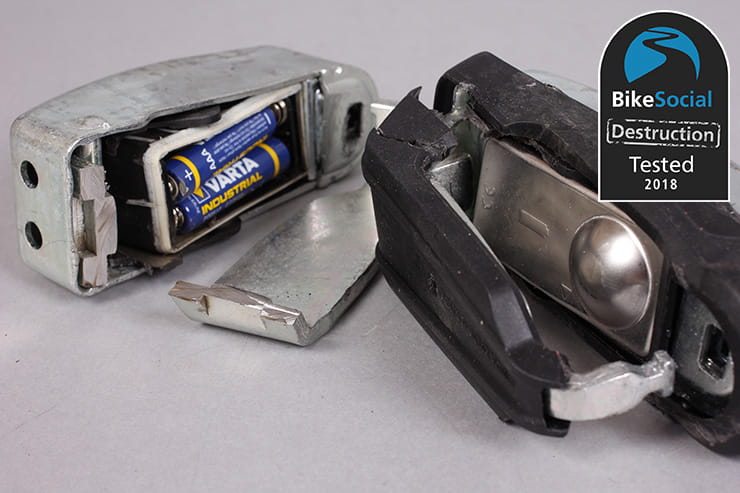 The pressed steel mechanism of the Abus Detecto 7000 is hardened, so I was unable to defeat it using a hacksaw. Equally, pry bars wouldn’t release it, and bolt croppers were of no use.

I was unable to smash the lock off the disc using a lump hammer, though this did stop the alarm from sounding by releasing the module and resetting it to off. After repeated attempts to smash it, the lock stayed secure, though once opened with the key, it wouldn’t relock.

An angle grinder will of course cut the lock, but this noisy attack still took a significant amount of time.

A determined thief will of course be able to defeat this lock using power tools. The alarm, while great for reminding you that the lock’s fitted, and good for attracting attention, isn’t particularly loud – and can be silenced a little too easily – but it’s certainly a solid piece of kit that helps prevent your machine being pushed away. It’s a shame the lock won’t work with all scooters, so check your machine before buying.

In the current climate, with many tool-less thieves kicking off steering locks then pushing scooters and motorcycles away with another scooter, the Abus Detecto 7000 does a commendable job.