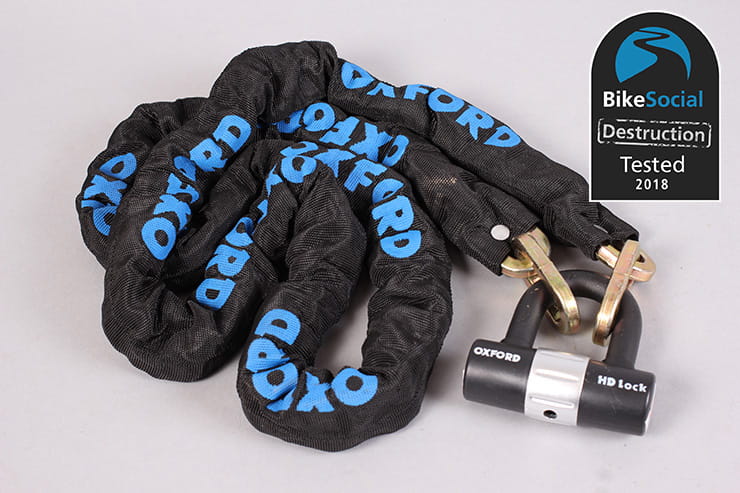 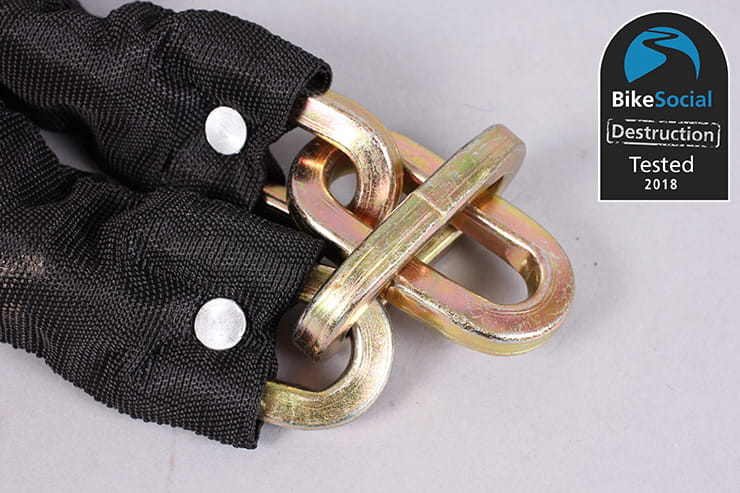 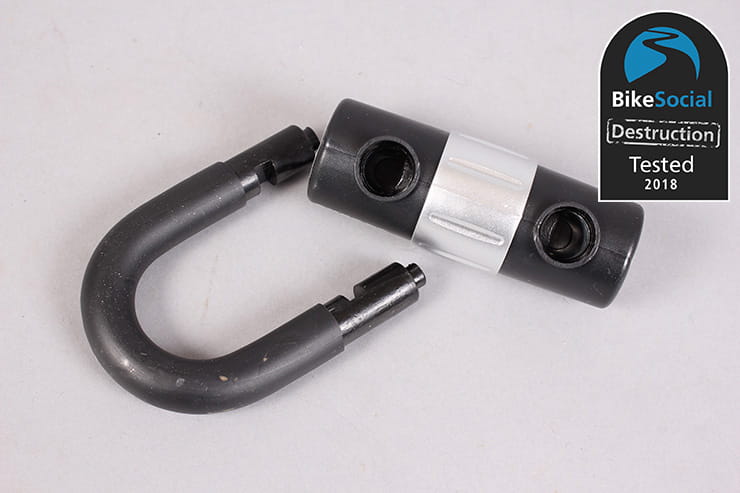 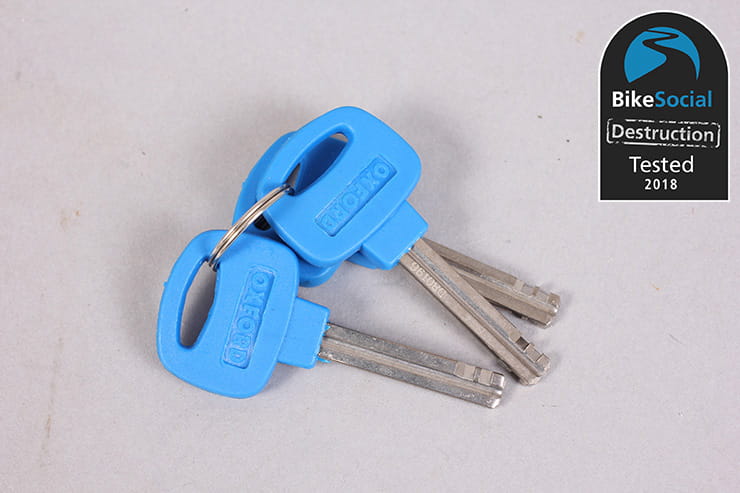 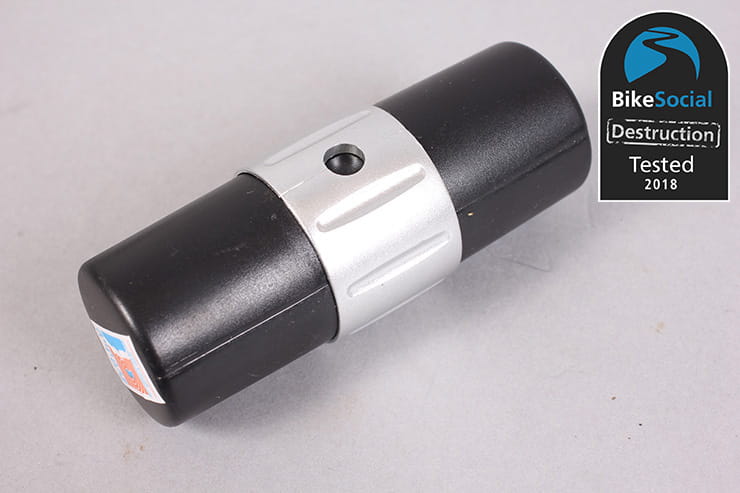 Available in sizes of 1.0, 1.5 and 2.0m, the Oxford HD chain and lock is approved to Sold Secure Motor Scooter Silver, and comes with three keys. The chain has 9mm diameter links, covered with a fabric sleeve that’s riveted at both ends.

The lock doubles as a disc lock (on suitable machines), and has a rubbery-covered shackle and a plastic-shod body. The keyway is protected by a rotating dust cover. 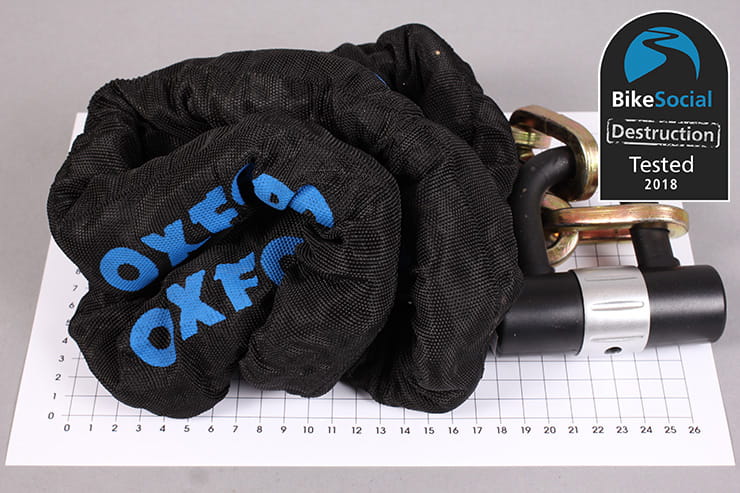 While the image above shows the 2.0m chain we used for testing – the 1.0m would of course be more compact, and should tuck under some motorcycle seats. For scooters, it shouldn’t be a problem to get it in the boot. At 1.0m, the lock and chain weigh just 2.43kg.

A fabric-sleeved chain will tend to get grubby in poor weather, so this is less convenient to use if you’re on a scooter wearing a suit, but it’ll pass easily through most wheels, and allows the moped, scooter or motorcycle to be secured to something solid.

Out test-bed of a Piaggio Beverly 350 disc would take the lock as a disc-lock, but keep in mind that this wouldn’t be possible on many other scooters, in which case the lock can still be used to secure the two ends of the chain.

If you can get the shackle around the disc, then do this and attach the chain to it as well, so that a crook has to cut the lock in order to wheel the bike off, even if they cut the chain – this will add more hassle, particularly in the case of machines that are pushed away with another scooter, which is probably the most common form of theft in London; it’s not easy to get a van in, or escape in one! 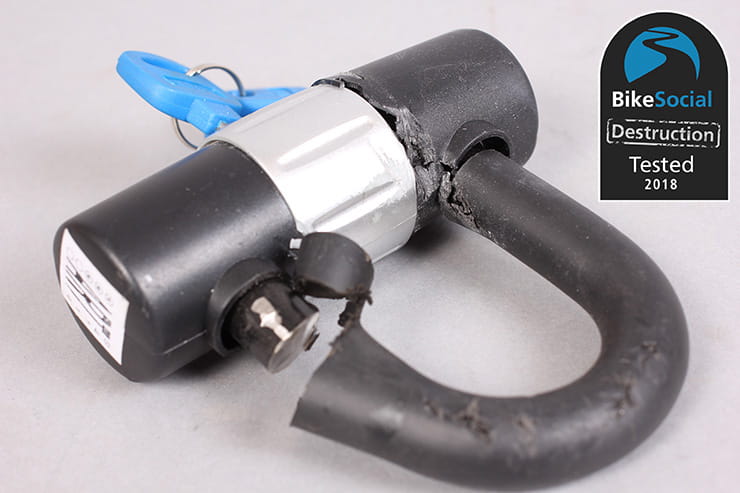 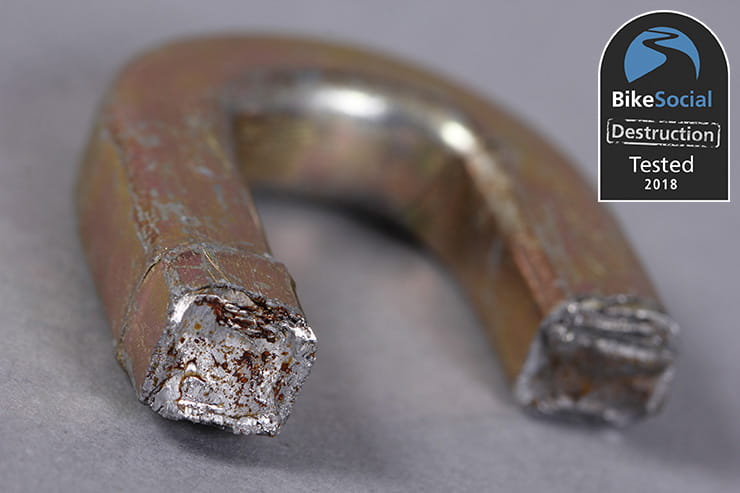 Handheld cutters are of no use on the Oxford HD, and the hardened chain was resistant to a hacksaw. I was able to cut through most of the lock’s body by hand, but the top edge appeared to be hardened, which stopped me after a lot of work.

A lump hammer couldn’t knock the lock off the disc, but it did distort, which stopped me being able to remove it with the key. Using a sledge hammer and anvil, the chain is very easy to break, but this is an unwieldy and unlikely attack method (and can be defeated by keeping the chain off the ground).

Bolt croppers make short work of the chain, and an angle grinder will of course defeat it, but the cutting times are in line with similar sized products, with the lock taking longer to get through.

This isn’t a lock combination that we’d recommend for overnight use, or at home, but as an easy-to-carry deterrent it’s worth considering, especially when it can very often be found in dealers at much less than its recommended retail price.