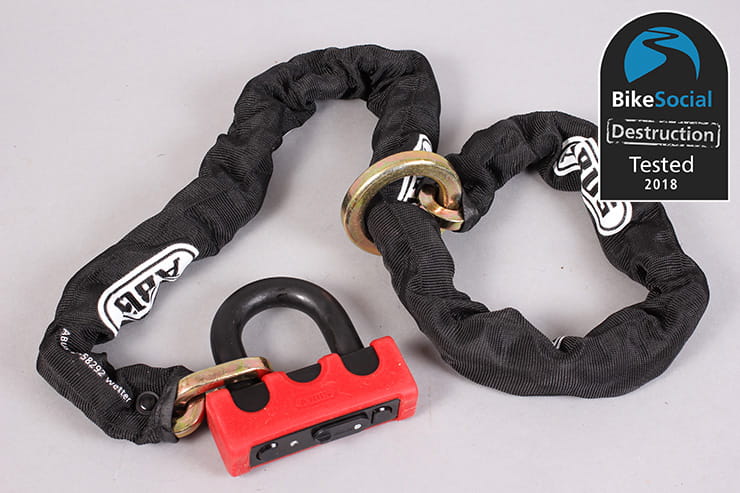 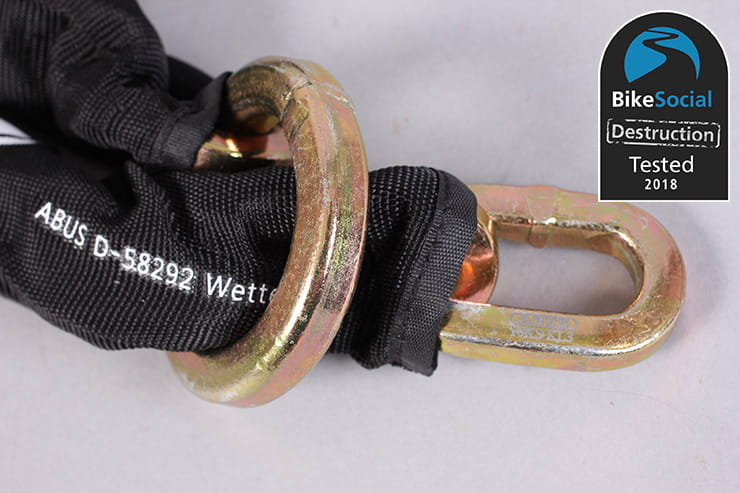 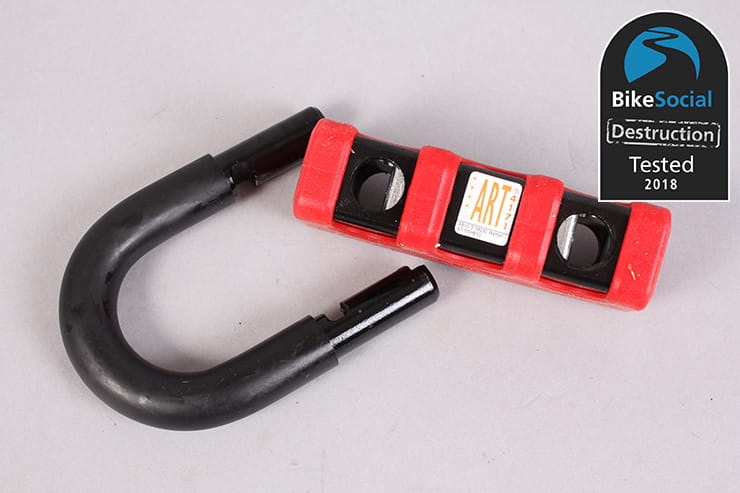 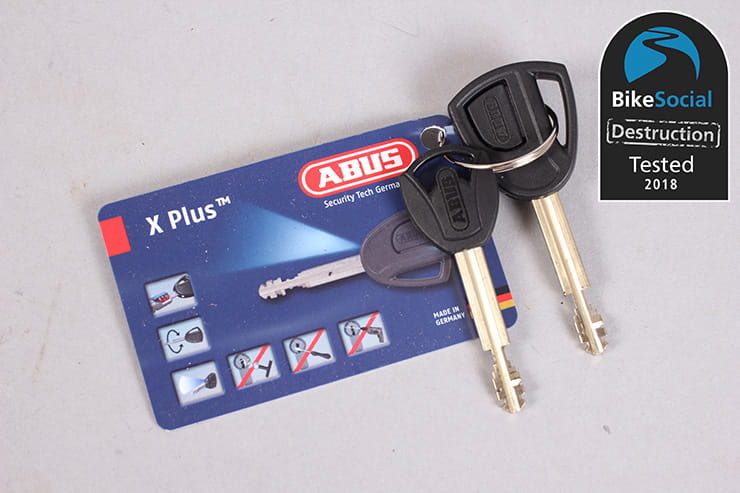 Combining the 10KS120 loop chain and XS67 disc lock, this Abus package offers a versatile and convenient scooter security solution that would also be suitable for many motorcycles.

The lock (not the chain) is rated to Thatcham Category 3, and comes with two keys (one of which has a built-in blue LED), as well as a code card for replacements.

The chain is 1.2m long and has 10mm thick, square-profiled links. One end of the chain has a large loop, which means the smaller end can pass through, giving good reach from a relatively compact product.

A fabric sleeve with riveted ends helps prevent the chain from scratching your scooter or moped’s paintwork, while the lock body has a silicone skin, with a rubbery coating over the shackle. 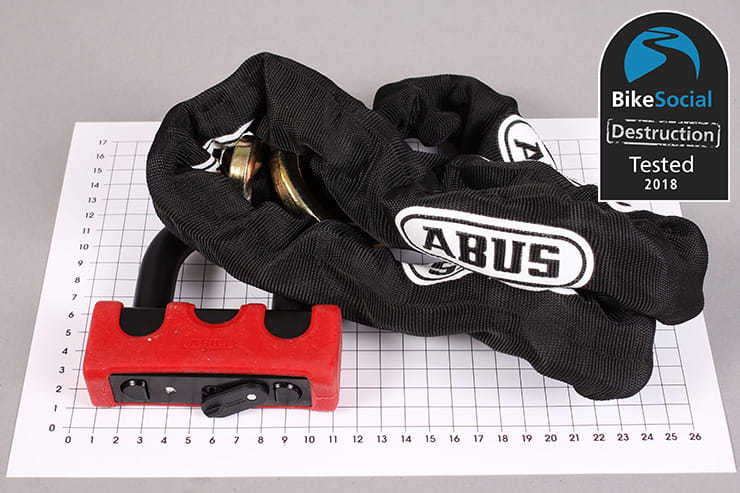 Weighing 3.32kg in total – 2.64kg for the chain and 680g for the lock – this isn’t too bulky a package, and can be stored in most scooters’ boots easily. At a push, it might fit under some motorcycle seats, but if not you could strap it into a bag or pop it in a top-box.

The disc lock easily fitted our test Piaggio Beverly 350 wheel, but many other scooters don’t have the large spaces in the brake disc carrier for the shackle to pass through – in this case the lock can be used to secure both ends of the chain, or it might be possible to fit the small end of the chain through something on the bike, then secure the padlock to the end of this, allowing the noose to give more reach.

If you can get the lock onto the disc, pass the small end of the chain through its loop and attach to the shackle, allowing you to prevent the machine being pushed away while also securing it to something – this way, even if the chain is cut, the scooter or moped can’t be rolled.

An alternative would be to lock onto a solid part of the frame or similar, but this would only allow you to tie it to something, leaving the chain as the weak point. 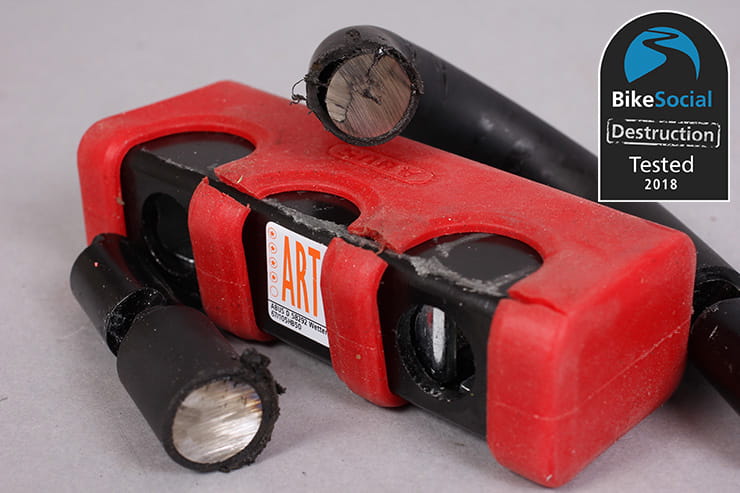 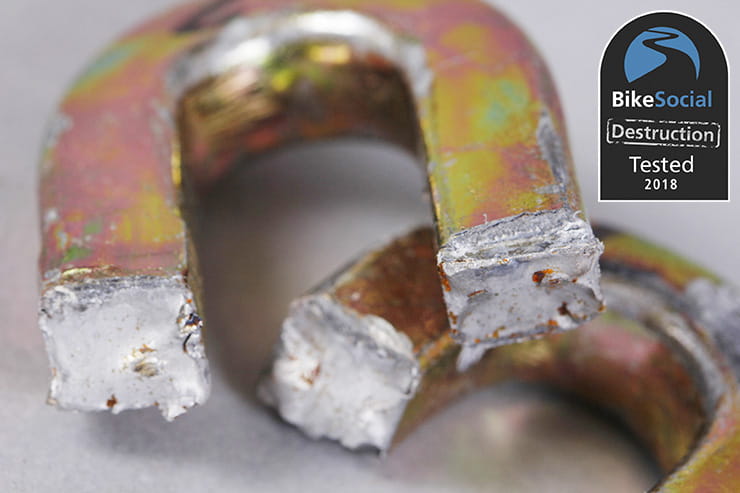 The Granit Power XS67 is a very solid lock, and couldn’t be touched by hacksaw, pry bars or massive 42” bolt croppers. It still worked fine after a very aggressive attack with a lump hammer, so only the angle grinder would defeat it.

While a grinder can get through the 14mm diameter shackle in a time typical of this size of product, both sides have to be cut to release it from a brake disc, as it won’t rotate enough to free it with one cut.

The chain can be beaten with bolt croppers (though it’s not bad for a 10mm link), and if left to dangle on the ground, given an anvil and a sledge hammer, a thief could smash it. However, these are bulky tools to carry around, and unlikely to be used in a city centre during the day.

An angle grinder will cut the chain slightly more quickly than the lock, but this is still an unusual and attention-grabbing method.

The Abus Granit Power XS67 is an excellent little disc lock / padlock – it’s versatile, compact and very strong… we’re impressed. You can buy it on its own, with an RRP of £95.99

As a package, this is a good, portable security solution, especially when you consider this is only a 10mm chain. For greater resistance to attack we’d suggest moving up to 13mm links, but most circumstances, except regular use in the same place overnight, this is a good choice.