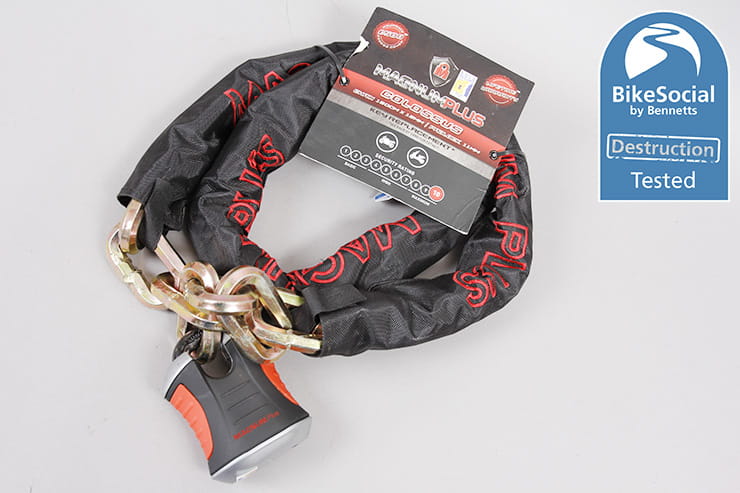 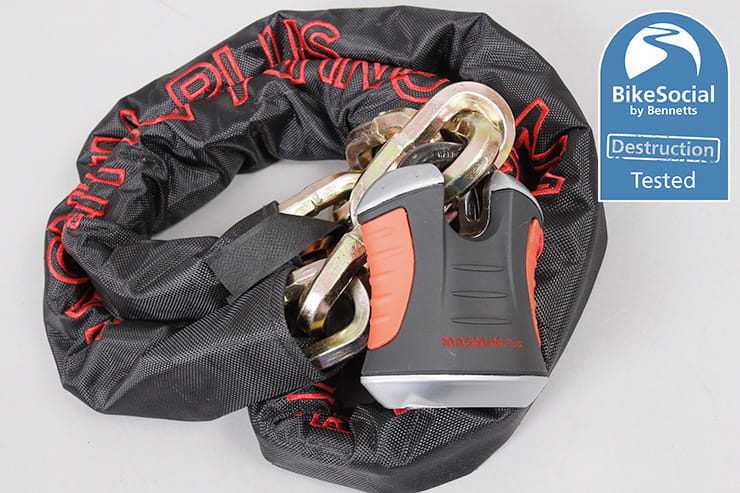 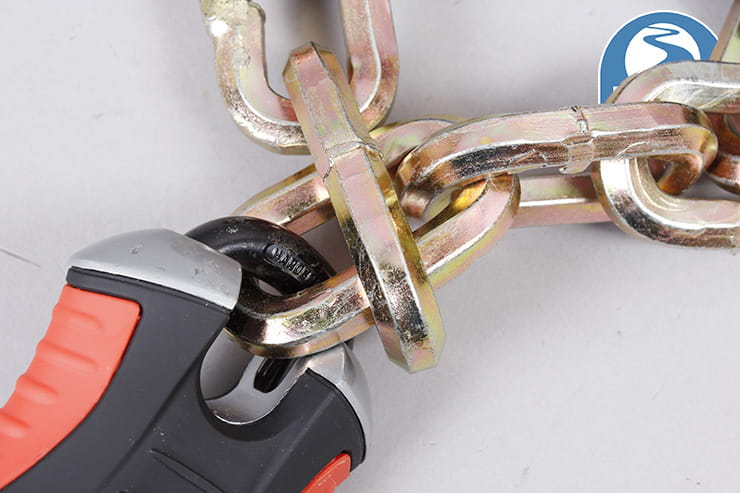 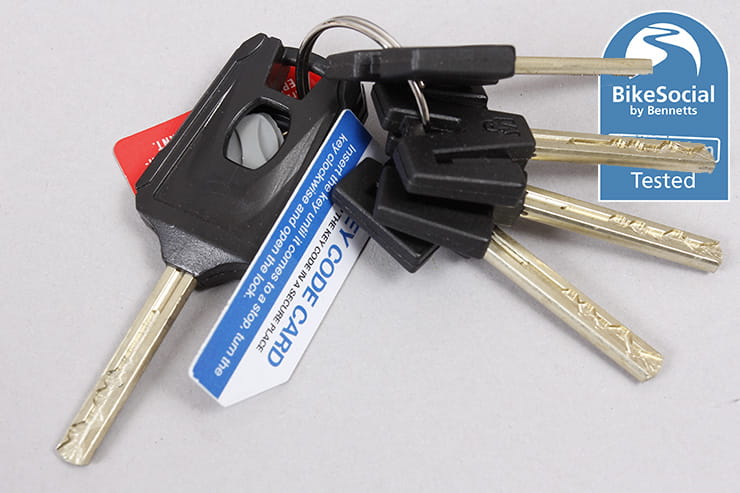 The MagnumPlus Colossus on review here is a long chain and padlock sold by Halfords that promises high levels of security for a reasonably low price.

This is the heaviest-duty chain that MagnumPlus offers at the time of writing, coming with a tough nylon sleeve that’s secured at both ends with hook-and-loop straps.

One end of the chain uses a longer link, and you can pass any of the other links through it, meaning you can keep the chain tight against the bike and what you’re locking it to. However, the sleeve is narrow, so you might have to cut this back if you want to run the chain shorter.

The padlock’s keyway is protected with a sprung metal gate to keep the worst of any grime out. A generous five keys are supplied, one of which has a small LED built in.

This package has achieved Sold Secure Gold, meaning it’s passed a series of independent attack tests (though this level doesn’t include an angle-grinder attack). The lock includes £500 excess cover; if you register online your insurance excess could be paid up to the value of £500 in the event of a successful motorcycle theft claim, if the lock was breached. The deal only lasts for 12 months from the date of purchase, and you’ll need to supply the original receipt, at least one original key and the broken remains of the lock itself, so this offer won’t apply if the lock is taken with the bike. Registration requires specifying the single bike that’s insured, so if you locked two bikes together, only the one that you register will be included. 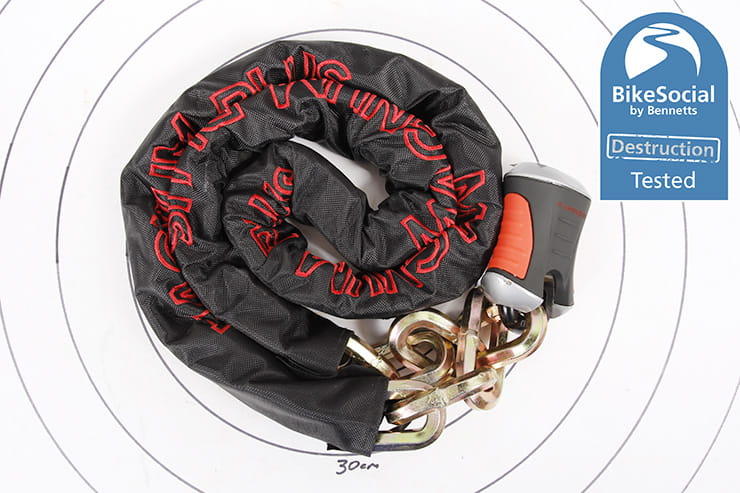 The hexagonal profile links have a typical thickness of between 11.7 and 12.2mm. Some of the links are a little inconsistently shaped, with the welded ends being slightly off-line, but they’re solidly joined. This 1.8m chain covers a rolled diameter of about 29cm; measured length is 182cm.

The padlock weighs 625g, while the chain is 5.8kg, making for a total of 6.43kg. Unusually, there are no other size options available, so while 12mm is what I’d consider a thickness suitable for portable security more than permanent home use, it does make for a rather hefty bit of kit. 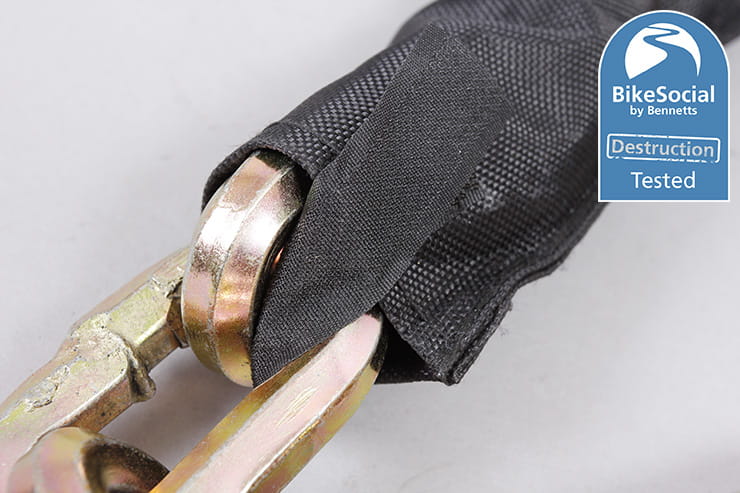 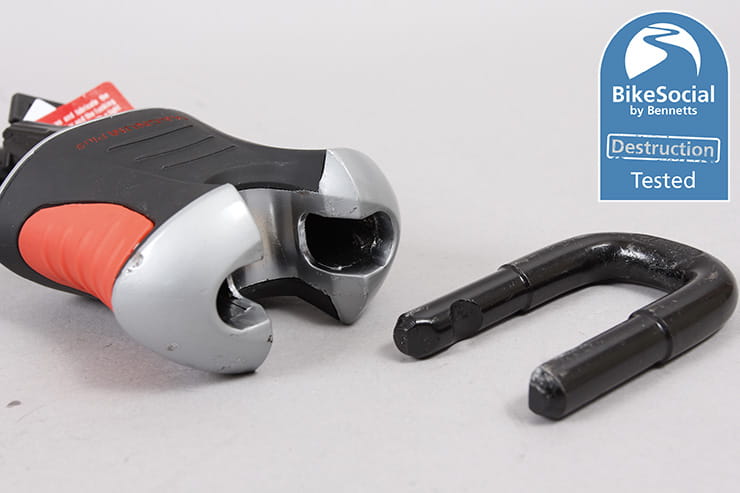 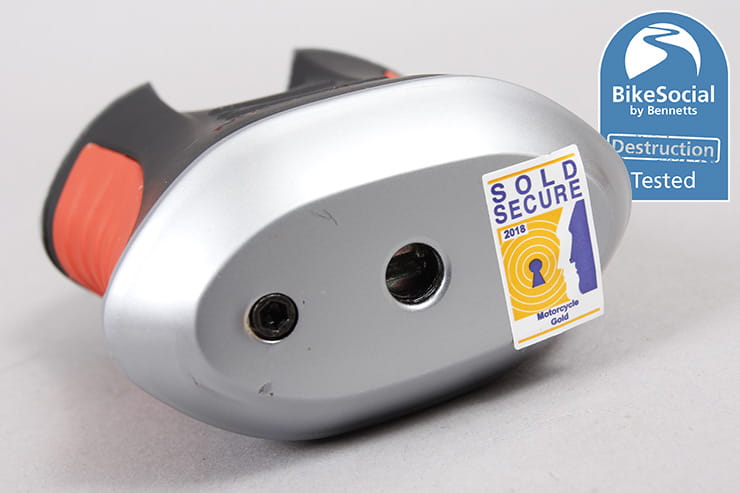 While 42” bolt-croppers did put a dent into the links, I was unable to cut through this chain, which is to be expected given that this is at the limit of the size typically defeatable with this silent attack.

It only took two good strikes with the sledge hammer to break the MagnumPlus Collossus, which is disappointing but this is a very noisy attack that’s the least likely to be used by a thief. It’s also easy to defeat by keeping the lock off the ground, and having the ability to pass any of the links in the chain through the long one on the end is a welcome feature.

Cutting the Colossus with a 1.2mm disc on an angle grinder is a relatively quick process, as is to be expected of a 12mm chain.

The shackle is partially shielded by a cast top, but it is possible to get the jaws of the bolt croppers onto it. However, I was unable to cut through it this way.

A sledge-hammer attack instantly shattered the plastic body and revealed what is a relatively cheap design but it stayed in one piece, just deforming with repeated blows, so the chain is the weaker area with this method.

Cutting the shackle with the grinder revealed a small amount of movement after one cut, but not quite enough to release the chain, so two cuts are required. These took fractionally longer than the chain, but the lock body is easier to hold during an attack.

Ultimately, the padlock is completely adequate for this package, but it’s unusual not to be finishing this section with ‘it takes far longer to defeat than the chain’. 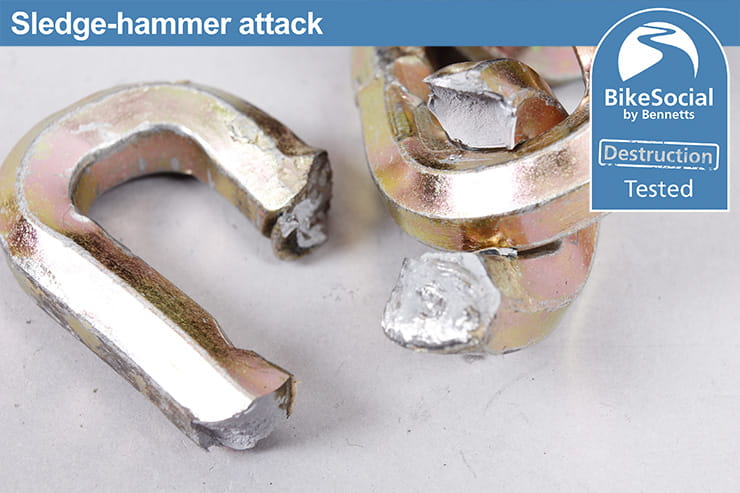 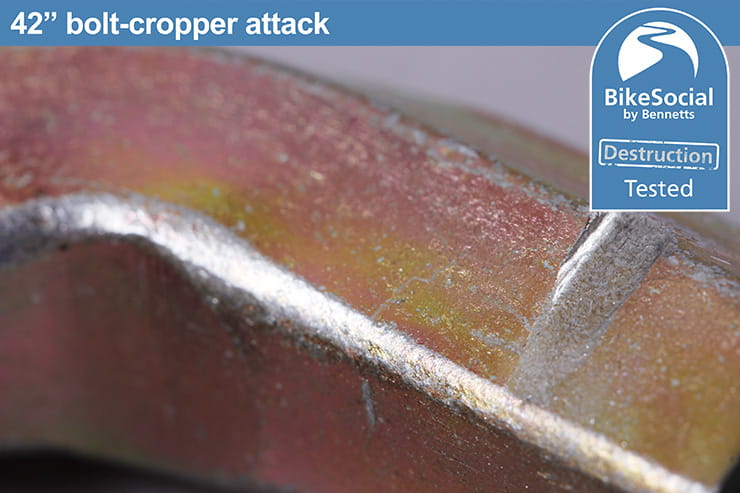 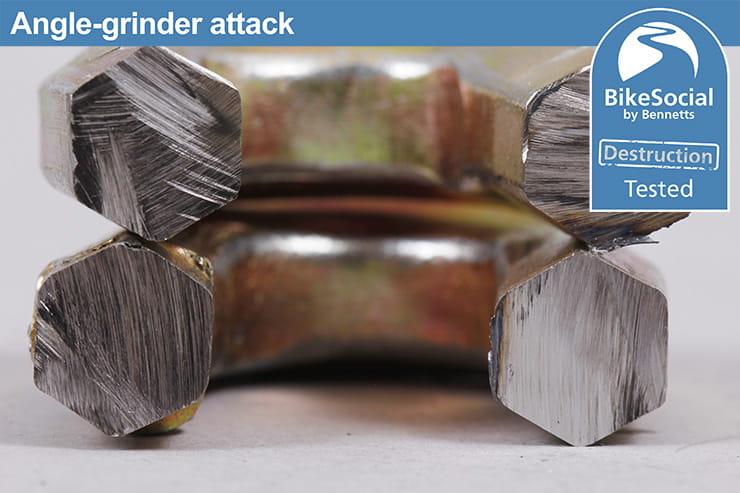 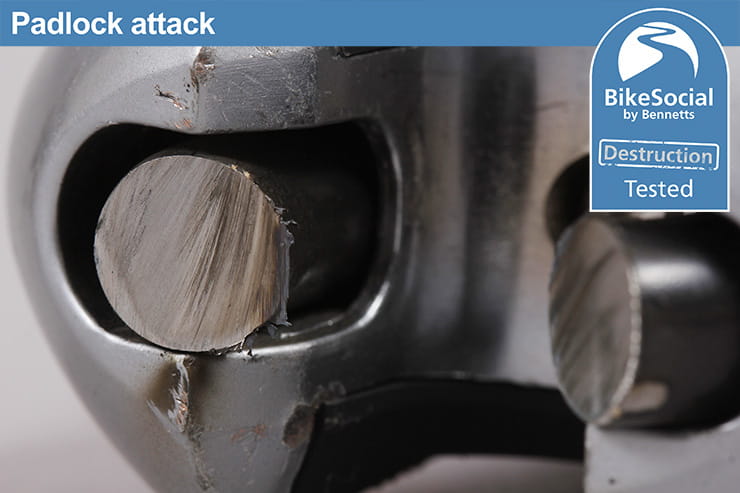 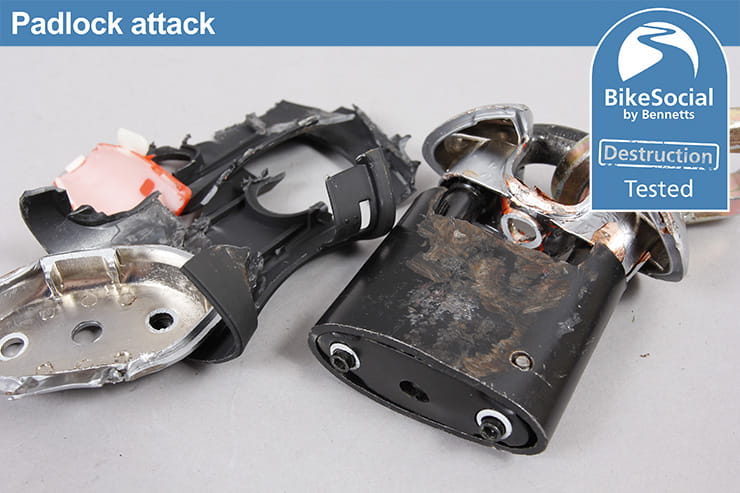 The MagnumPlus Colossus offers the security levels I’d generally expect of a 12mm chain, but its length makes it quite heavy, so difficult to carry around. That leaves it sitting uncomfortably between lighter and cheaper portable security with similar performance, and heavier – but much tougher – kit designed for home use; if you live in a high-crime area, I’d recommend investing in something much heftier for that purpose, or perhaps combining this with another lock… it’s all about making a theft as time-consuming as possible.

BikeSocial members can save 10% at Halfords, bringing this down to £85.50. With or without the discount this isn’t bad kit as long as you keep in mind the limitations of any chain this thick.