Lever protection systems are a pretty new idea from the world of bike racing.

Introduced to Grand Prix in 2012 and the rest of the major championships this year, they are designed to stop accidents like the horrific first corner crash at the 2006 Catalan Grand Prix, where Sete Gibernau’s Ducati flipped over the front at 200kph when his front brake lever was tagged, and the innocuous grid collision at Assen in 2012 that ruined Tommy Hill’s title defence. 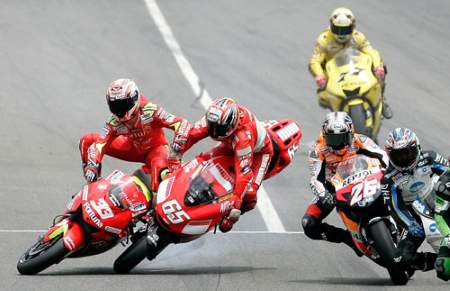 Inventors of the lever protector are Italian accessory gurus Rizoma, who came up with their Proguard system after witnessing the aforementioned Gibernau crash. 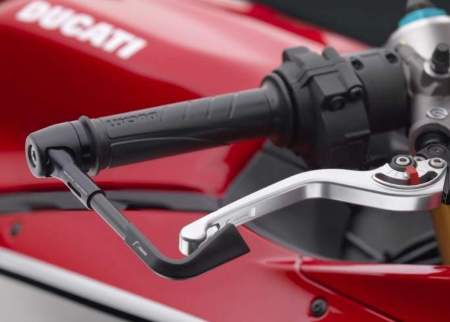 I first witnessed the Proguard when they adorned the Triumph Street Triples that appeared in the shortlived World Superbike support series in 2010, which led to me fitting one to my own Triple R.

The design itself is both simple and ingenious in equal parts. The system replaces the standard bar end weight and puts out an arm and shield to deflect any potential objects (car mirrors, other riders etc) from activating the lever. In true Rizoma style, it looks great. They also say that it reduces wind drag on the brake lever (which they claim is up to 0.8bar pressure at 200mph) although as I don’t have access to a MotoGP bike, I haven’t been able to test the theory.

Indeed, I have never had to use in the Proguard in anger, but the fact that I’ve not been clipping my brake lever as I ride my bike through my narrow garden gate is testimony that the system works. It’s simple to fit and comes with different length arms to fit most bikes.

Rizoma claim that this is the only piece of genuine MotoGP tech you can buy for your bike and they may have a point. A standard Proguard costs £85 each (the race version, which is curved and weighs 70g less, is more than double) and while most riders may see the Proguard as an expensive trinket, I totally get it. Whether you love track days or spend your time filtering through traffic, having a lever protector might just save you from an embarrassing, expensive or even downright catastrophic crash.