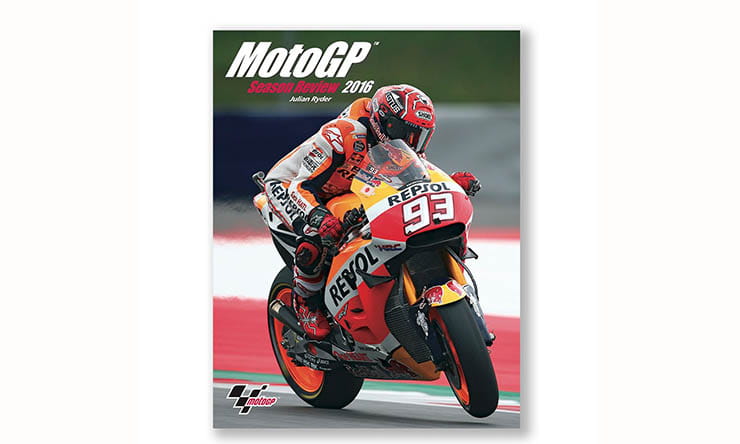 Within days of the 2016 MotoGP season ending, the season review appears, now presented by the award winning Evro Publishing who took over the publishing of this official book two years ago. It follows the same format as usual, one that really works and gives you an insight to racing, as well as reliving memories from another great season. It's presented on high quality glossy paper, making it a quality product in every way.

The book examines all the riders, the bikes, and really gets behind the scenes in order to give an in-depth analysis to all aspects of the season. Eight pages are devoted to each round, ending with charts and graphics to show you how each rider did throughout the race. Likewise, the statistics provide a historical record that can easily be referred to in the future.

Once again the production team is led by legendary motorcycle journalist and broadcaster Julian Ryder, who has overseen the production of this 200 page hardback jacketed volume. There are 250 stunning colour photos from top GP photographer Andrew Northcott. Mat Oxley has supplied an incisive review of the season while technical expert Neil Spalding has reviewed tyre company Michelin’s comeback season to MotoGP, as well as taking an in-depth look at the factory machines.

The book is the 13th in the series and covers a season that produced a record nine different winners, despite Marc Marquez clinching the crown with three races to go. But, there were a lot of other interesting facts and ‘firsts’ going on, such as Cal Crutchlow taking the first British win in the premier class since Barry Sheene 35 years ago, and Ducati finally getting the top step on the podium for some years - to mention just a few.

As you read through the clearly laid out pages, you realise just what an unpredictable season it really was and the headline final positions are misleading, it was literally a season of twist and turns. With new tyres and unified electronics, those tipped for glory were found struggling, while others defied the pundits' predications. If you want to know why, this book - as ever - provides the answers.

As usual, while the majority of the book is obviously dedicated to the premier class - given its title - there are, of course, chapters on Moto2 and Moto, as well as information on the Red Bull Rookies Cup and Two Wheels for Life (the official MotoGP charity).

Yet again the production team has managed to make the text nearly as exciting as some of the racing, so, as well as being an accurate historical record, it is also an entertaining read and well worth the cover price of £35.00 (which is the same as last year!)

Available from all good bookshops or directly from www.evropublishing.com