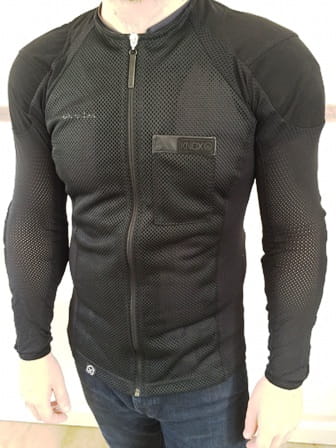 There's a trend amongst certain groups of riders to ditch the riding kit and go for pure style. I'll freely admit to being part of that crowd. I have a beard and an old wax-cotton jacket that I like to ride/pose in, but I also have a mortgage, a missus and two cats to feed; avoiding six weeks in plaster would be good, but I still don't really want to end up looking like a Power Ranger.

Thankfully the clever folk at Planet Knox have come up with a rather neat solution in the Urbane Shirt: race quality protection built into a zip up shirt that won't look out of place poking out from under a vintage leather.

The Urbane is not new in the range, but when Knox come across new armour technology or something about an existing product is fed back to them by punters/dealers/testers, it gets incorporated into next year's model. So really this year's kind of is new.

The concept is fairly straightforward: upper body CE-approved protection in an easy-to-use shirt that you can quickly put on under a casual jacket to add an element of protection, or a motorcycle jacket to improve what's there already.

My first go with the Urbane just happened to be on one of the hottest days in June – a 90-mile round trip to pick up a bike. Although it felt a little odd at first, I have to say I genuinely forgot I was wearing it. The mesh construction is hardly noticeable on, and is flexible enough to allow plenty of movement on and off the bike. It does a great job of getting rid of sweat and keeping you cool too.

It takes a little jiggling to get everything lined up when you first put your jacket on, but once it does nothing moves - one of the other main plus points with the Urbane is it holds the armour where it should be. It does just that and without having to faff about with straps, buckles or Velcro; you just put it on, close the zip and it just fits. To be honest, going back to a jacket with armour built-in now feels a bit scary; I can't help pulling the pads about to see how far they might move in a crash. 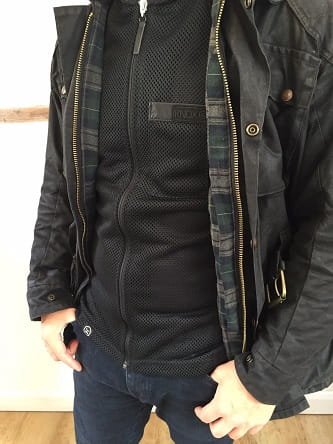 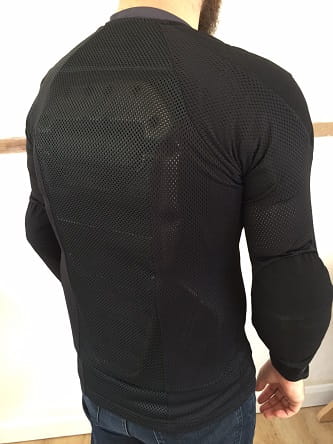 You get Knox Lite+ protectors on shoulders and elbows and a full length CE-approved back protector, plus the option to add a chest protector too. The armour is soft, flexible and low profile, so it sits neatly under a close-fitting jackets and doesn't look too bulky either. I have no problems getting it under my wax-cotton or my 'proper' leather riding jacket; the fabric sections on the Urbane's shoulders and elbows help.

Knox know a thing or two about armour, they invented the back protector in the early 1980s - MD Geoff Travel was a bit of a racer back then and having got a bit sick of lying in hospital beds, started experimenting with foam protection. Thirty-odd years on, they're are at the forefront of protection technology, so I know that if I ever have to test the armour in the Urbane they have done, repeatedly.

Handily, Geoff's daughter April is a rather talented fashion designer with a trendy East London studio, and her influence is definitely present in the Urbane's look. Although designed to be quickly taken off and stashed when you reach your destination, it's subtle enough to go largely unnoticed if you don't. Although lightweight and stretchy, the mesh 'body' feels like it'll last a good few years, as does the stitching, zip and other detailing; everything's just got a quality feel to it.

Although it's early days, I'm struggling to find fault with the Urbane really. I'm so impressed with it I've now taken the armour out of my Dainese leather jacket and use underneath that instead. I did initially think I might be put off having to put on another layer before I went out in the morning, but if anything it's made me more likely to take the bike – I can now pop any jacket on top of it and be relatively safe.

It's become like earplugs and a neck tube; one of those bits of kit I automatically put on and forget about, because it just gets on with its job.

Do you wear protective undergarments under regular clothing? Is this something you'd try?  or