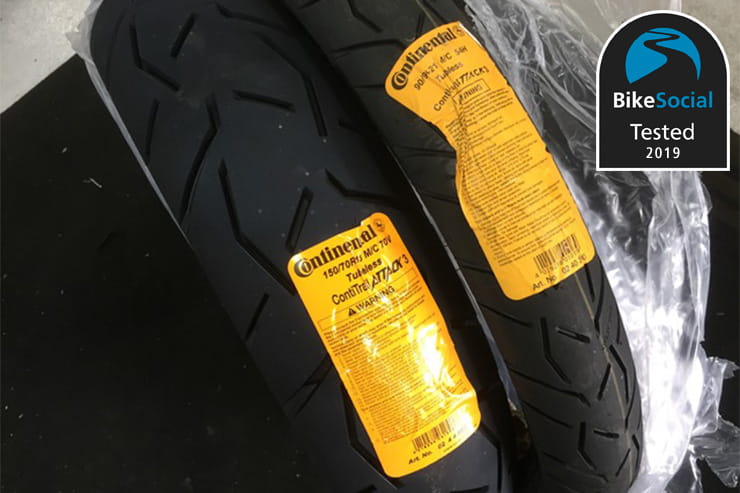 Already 5,000 miles in on my Honda Africa Twin, so Continental’s Trail Attack 3s on review here have what it takes to perform like new on a 550 mile ride across all terrains?

With plenty of miles already on them, I took these upgrades from the previous Trail Attack 2s on a long day’s ride that included motorway, A roads, B roads and off-road forest sections… 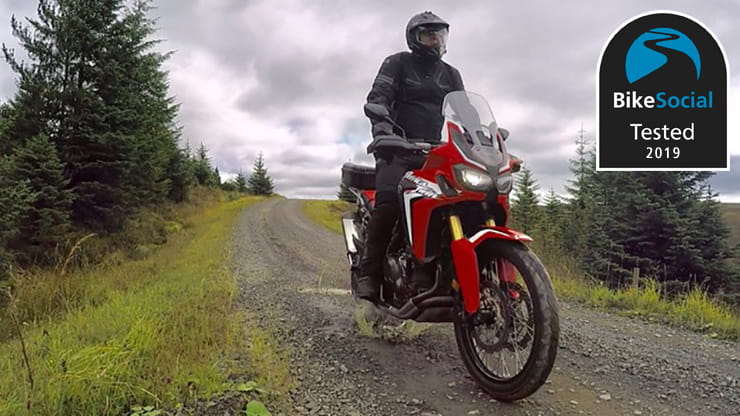 Continental uses a variety of names to describe the construction of its tyres; ‘Rain Grip’, for instance, is its term for a higher silica content to promote better wet-weather grip.

‘MultiGrip Technology’ describes the curing process of the tyre compound, which enables the rubber to cure at a different rate across the tyre’s width. This provides a harder central area for longevity and a grippier outer edge to improve cornering traction all from a single compound that enables a seamless transition.

The zero degree steel belt limits tyre growth at high speeds for – Continental says – superb stability, even under heavy braking. And all of this is made available early in the tyre’s life due to ‘Traction Skin’, a micro roughness of the tread that enables a shorter scrubbing-in period. Once that short period is over the Trail Attack 3 is claimed to have the quickest warm-up time of any similar tyre – within just 1,500 metres. 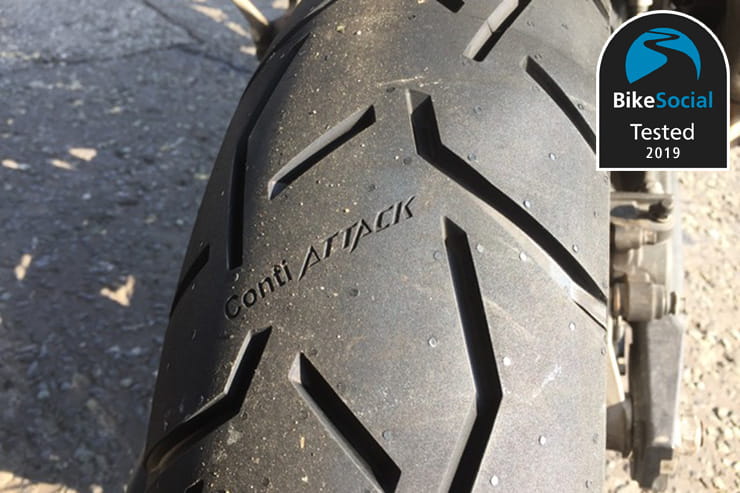 Continental has aimed the Trail Attack 3 directly at the adventure bike rider who spends most of their time on the road but still wants to experience light stony / gravel trails. It’s available as 17, 19 and 21 inch fronts, along with 17 and 18 inch rears, so pretty much covering all adventure machines. 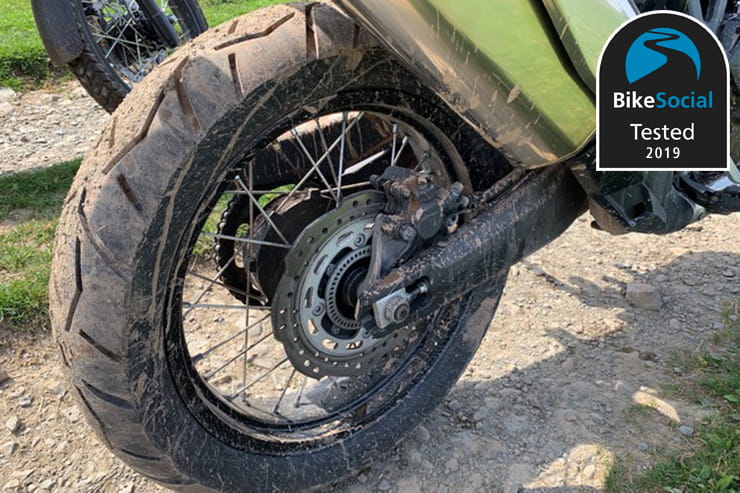 The sort of off-road riding these should be subjected to isn’t what you’d describe as a motocross circuit, but more forestry roads and gravel tracks. I ran through a trail on them just after I’d ridden a smaller bike with Mitas E-07s and remember worrying that my Africa Twin might be a handful with the Trail Attack 3s on.

I was wrong; the big bike took the trails in its stride, with the tyre showing stability on dry tracks and not being fussed at moderate speeds. It changed direction nicely and a bit of ham-fistedness with the throttle could provoke a break in traction that was easy to control. It would be a different story in mud, but that’s not where these are aimed. 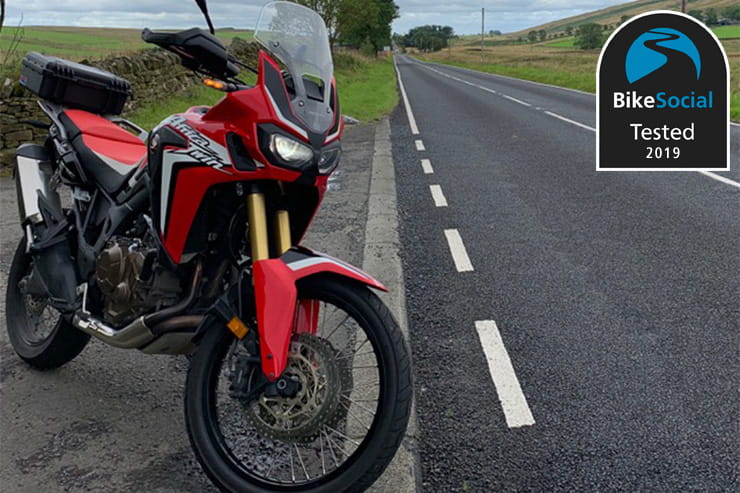 Continental says these have the quickest warm up time in the sector, with as little as 1,500 meters seeing them up to temperature. As luck would have it, there’s a particularly nice right-hand corner 1,500 meters from my house...

The turn in and grip available even at that early stage in a ride are excellent; much more confidence-inspiring than the OE Dunlops that came with my 2017 Africa Twin.

On the way to that 5,000 mile figure these Contis had been around the North Coast 500 twice in weather ranging from warm dry days to torrential down-pours. Under heavy braking in dry conditions – the sort that immediately focuses your mind to the prospect of a tyre giving way – the Trail Attack 3s proved up to the task, pulling up quickly with no loss of traction.

Cornering on fast A and B roads didn’t fuss them and they provided much more grip than the skinny front tyre on an Africa Twin would suggest. I especially like the section of A82 alongside Loch Lomond between Tarbet and Ardlui – it can be terrible in holiday season when it becomes an eight mile traffic jam, but it’s one of the main roads used by adventure bike riders on their way to the highlands. Arrive at the right time and it’s a different experience as the road surface has been upgraded in recent years and it flows wonderfully along the Lochside, with the hills starting their climb directly on the other side of the road.

The downside is that water runs directly from those hills and into the loch across the road, usually on a bend. Having confidence in a tyre’s abilities really affects the way you ride; think they’re twitchy and you’ll stiffen up and not want to lean on them, ruining your enjoyment. But the Trail Attack 3s didn’t skip a beat as they transitioned between the dry and wet on bends… no worries. 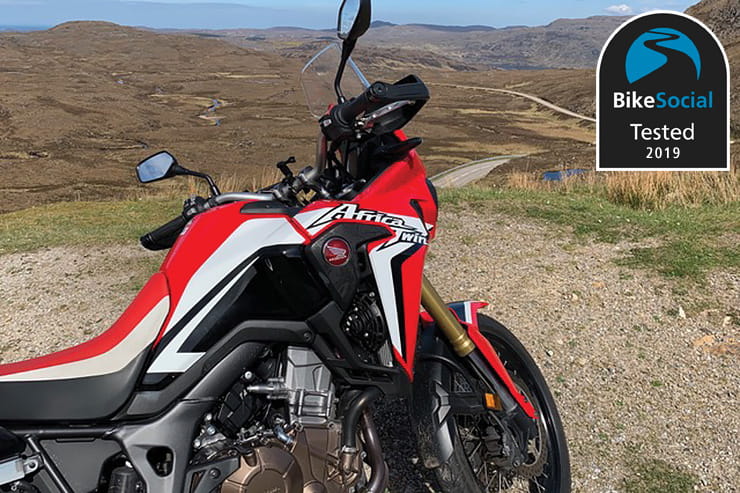 Running the Africa Twin around Scotland I invariably hit wet roads, although much less than popular opinion would suggest. However, riding from Tongue to Bonar Bridge in a weather warning for localised flooding gave them a great workout. Just shy of 50 miles of twisty single-track road that runs through remote Altnaharra and onto some well-paved road on the last run into Bonar Bridge, these are the roads that big adventure bikes are made for, the sightlines on the single track generally so good that it’s possible to maintain a very healthy pace. The only limiting factor can become changeable conditions and a tyre’s ability to deal with them.

The Continental Trail Attack 3s were exceptional as the conditions changed from drizzly and damp to full-on standing water. I don’t just mean the odd puddle of standing water, I mean complete road coverage. The tyre’s ability to cut through the water and provide feedback was astounding. I was glad I wasn’t on the original tyres the bike came with.

Tongue to Bonar Bridge; “The roads that big adventure bikes are made for”

The Trail Attack 3s started with about 8mm of tread on the rear in the centre. 5,000 miles later they had about 3-4 mm left so they’re using about 1mm per 1,000 miles, which is on a par with the Dunlops that came with the bike (except these are exhibiting a lot more grip).

There’s more depth on the shoulders but the law states a minimum 1mm so we’ll go with the centre as that’s where they were originally measured. I’ve been riding fairly hard where I can and have tried to focus on fast A and B Roads to ensure that they get a good workout on bends; the sort of roads you might concentrate on while riding a big adventure bike. The front is wearing in line with the rear and they’re well off needing a change. If you ride really conservatively I’ve no doubt you’ll get an even longer wear rate. 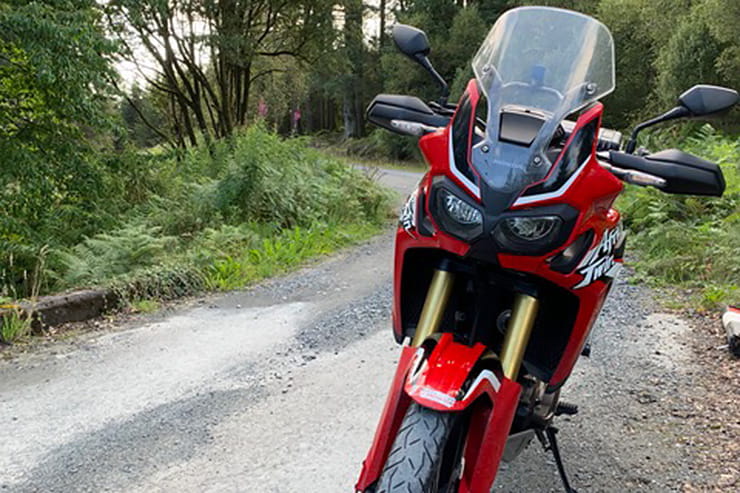 So, with 5000 miles on them, did they still perform like new on that 550 mile ride? On a day that encompassed rain through to bright sunshine and into the cool of night along motorways, country roads and forest tracks, they were great. Confidence-inspiring grip on the road, which is where most riders are going to use them, and enough grip to inspire adventure if you decide to stray onto hard-packed stony trails.

They’re wearing similarly to the OE Dunlops the Africa Twin came with, but with much more reassurance across the board.

If you’re looking to change tyres, I really would thoroughly recommend the Continental Trail Attack 3s.