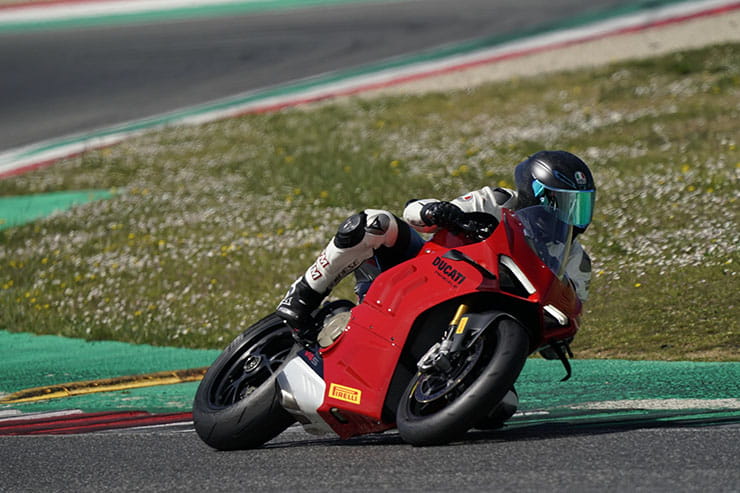 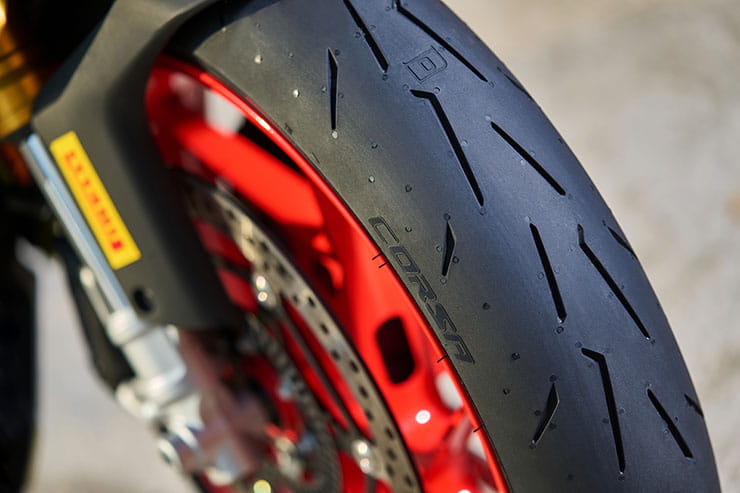 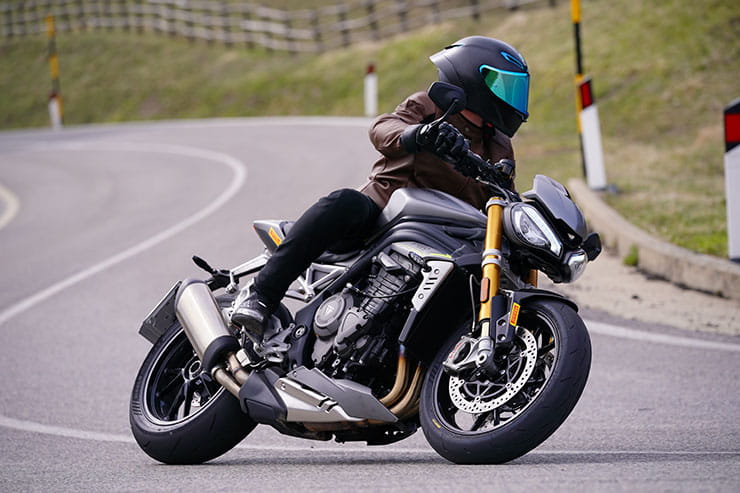 There are a handful of road-oriented tyres that can just about cope with the stresses and strains of a track day, while on the flipside, an even smaller offering of more specific track day tyres that can do a competent job on dry roads. But following in the footsteps of the mighty Pirelli Diablo Rosso Corsa II released in 2018 and the Diablo Rosso IV from last summer, comes the 2022 version, a true hypersport, high-performance tyre called the Pirelli Diablo Rosso IV Corsa, or ‘Quattro Corsa’ as the Italian manufacturer prefers.

The sportiest tyre in the Diablo Rosso family is aimed fast road riding and track day enthusiasts, the DR4C takes the basics of the Diablo Rosso 4 and as a compromise to less wet grip and mileage, it instead focuses firmly on dry grip, hard handling, and performance consistency, offering the best of both worlds in one premium tyre.

Sportier than the DR4 leads to faster lap times and greater lean angles effectively giving you a tyre that corners faster and allows for earlier full throttle acceleration, according to the firm’s test data using a BMW S 1000 RR at the Pergusa circuit in Sicily.

So, it seems perfect to head to one of the finest circuits in Europe, if not the world; the glorious grand prix track of Mugello. Three sessions with a selection of the finest production super bikes from Ducati, Yamaha, Honda, Kawasaki, BMW and Aprilia were followed by a 60-mile romp around the nearby Tuscan hills north of the track using any of the sporty nakeds from Triumph, Aprilia, KTM, BMW, Honda, Yamaha, Ducati, and Energica. 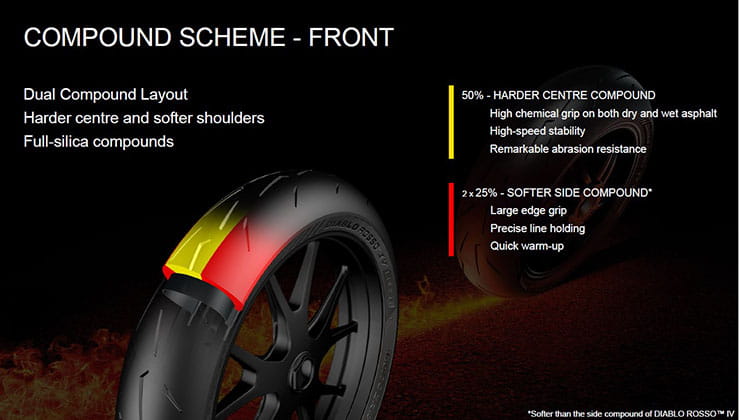 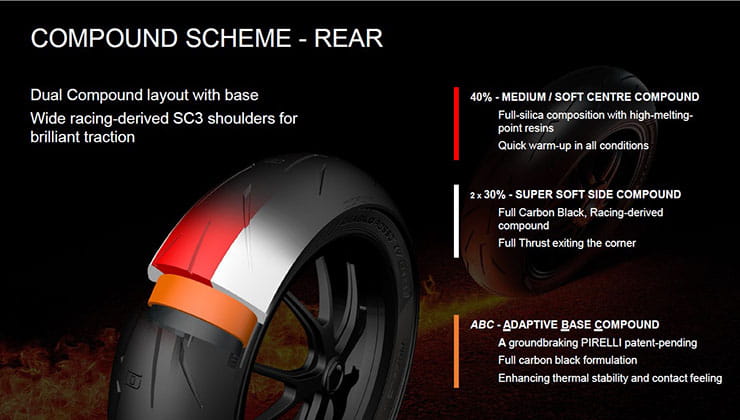 The world of motorcycle tyres has been forced to develop quickly over the past decade with the increase in power, torque, performance and, importantly, electronics. Pirelli is now 150 years old and has plenty of knowhow when it comes to creating a product to fit desired categories and, as we’ve already alluded to, the DR4C will be primed for the super bikes, super sports and sporty nakeds – basically ideal for any machine with a 17” front and a 17” rear wheel, that can hustle.

Both the front and rear use two different compounds split across three sections: two shoulders and a central band. On the front, the middle 45% of the tyre has a Full Silica compound whereas the shoulders are softer yet also Full Silica. On the rear, the difference is in the shoulders where the 100% Carbon Black comes straight from the Supercorsa SC for maximum grip at maximum lean, and traction during acceleration from even the tastiest of the latest gen super bikes. 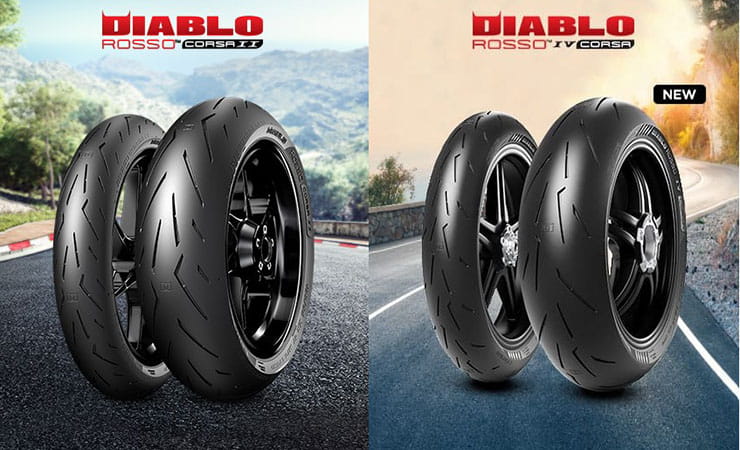 What are the available sizes for the Pirelli Diablo Rosso IV Corsa? 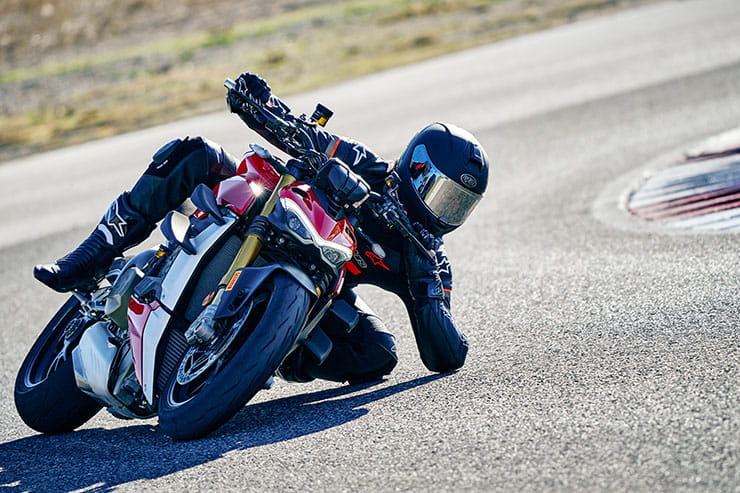 Above: Pirelli’s test rider with an extreme lean

From the superstar super bike line-up, I elected for the only bike I’d ridden at Mugello previously, the Aprilia RSV4 1100 Factory for the first session. Followed by the standard Fireblade (non-SP), and then 2022 Ducati Panigale V4S.

With an ambient temperature of just 8 degrees Celsius at the start of the first session my thoughts were with the tyres ability to get into some kind of operating window. Or perhaps my ability to feel when the tyre was warm enough to push a little harder, it had been a while since my last track excursions and three years since lapping Mugello. Two fairly brisk laps behind Pirelli’s full-time racing guide rider soon blew away track cobwebs but also the ridiculous notion that these sport hoops would need a more gentle caress into life. Pah, they said. In Italian. Within a lap and a half I was barrelling down the hill into the left-hander at T7 known as Savelli, before hoiking it right into the long double rights of Arrabbiata 1 and 2. The tyres were not the limiting factor behind this creaky 42-year old’s track management.

These Pirelli’s didn’t seem affected by temperature. The latter sessions operated into 16-18 degrees and by the end of lap 1 and into the braking zone for T1, San Donato, at 186mph, they were as warm as a non-racer-yet-advanced-track-day-man would need. Stable, consistent, and perfect for letting me get on with playing hunt the apex. The choice of circuit was excellent given the fast elevations throughout the lap, including accelerating out of T1 uphill as well as the long, long left hander onto the start/finish straight where you have to be patient before releasing every single horsepower. The front tyre is exceptional, the steering is light and little effort is required to turn the bike. It’s easy to get onto its side and maintain a line before having the confidence to get the throttle open early. I’ve no racing experience but can ride a bike aggressively enough to push a rear tyre but traction control settings on these beasts would always beat me to it. Unless you’re hunting absolute lap times, then compared to a Supercorsa SP, the Diablo Rosso IV Corsa run them extremely close, noticeably so on the incredible Ducati Panigale V4S – so much poise for one with such power.

What I did notice is the cold tearing in the cooler conditions on the RSV4 at the end of session 1, yet once the temperatures had risen the tyre seemed to settle. The Ducati, for example, had been used four sessions before I got my hands on it, and only by the end of my session could I just about tell the feintest movement in the rear.

During testing, Pirelli claims to have shaved 1.8s off the lap time at the 3-mile, 18-turns Pegusa track compared to a Diablo Rosso IV, with an increase of 2 degrees extra lean angle. The test rider was able to carry more speed at the apex and get on the power earlier. Unless I was riding them back-to-back, it’d be tough to tell but the more important question is how much quicker would they be compared to the Diablo Rosso Corsa II? 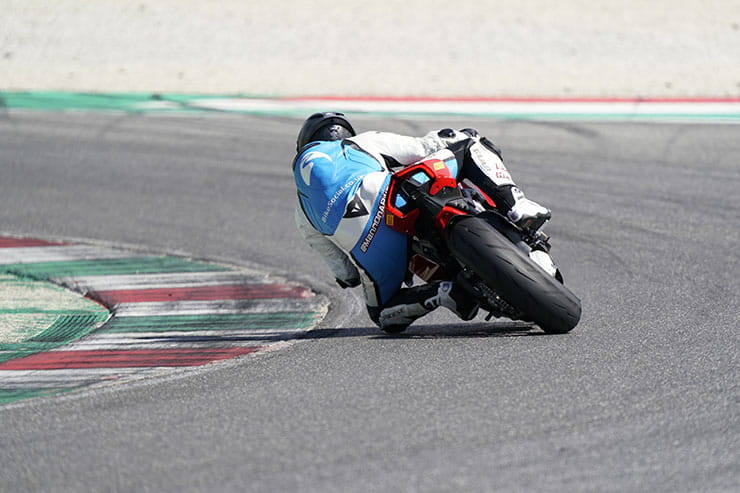 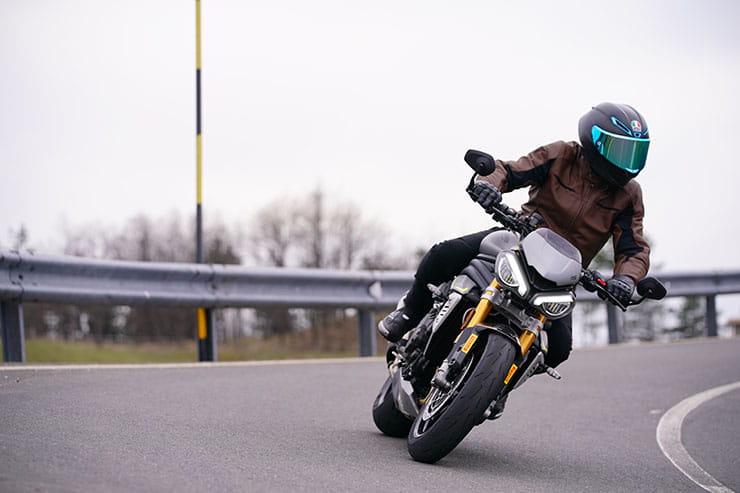 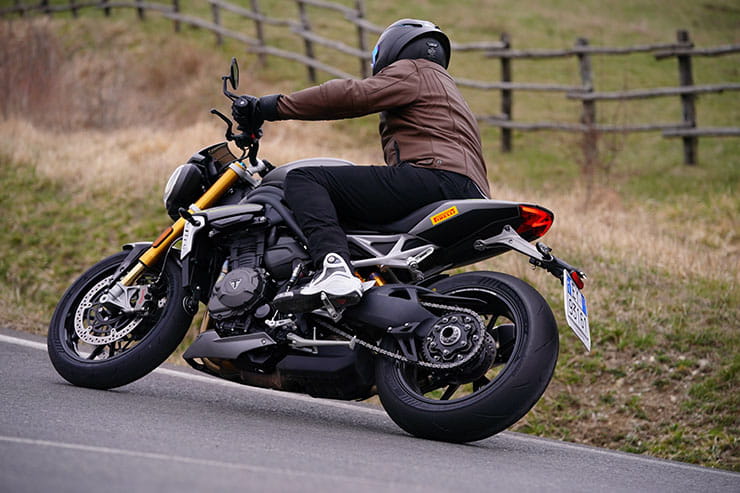 From the selection of supernakeds, I opted for a Triumph Speed Triple 1200 RS for the opening stint containing a mixture of open roads and hilly passes, yet not once did I see 6th gear. Again, the route was chosen to demonstrate the tyre’s performance under braking, into and through tight hairpins as well as faster 2nd/3rd gear twisties.

Our route was bone-dry and just 60 miles in length so judgement on durability and wet weather performance would have to be saved for another day, although Pirelli’s marketeers were quite content to demonstrate a spider graph showing how these two elements had been shunned with a preference for dry grip, handling and performance consistency.

The Triumph stood firm, braking was comfortable, turning was easy and moving the bike from side-to-side even on some of Italy’s crummiest overbanding that looked to have been applied by the YTS lad at 5pm on a Friday. Perhaps Pirelli chose those roads deliberately to demonstrate said stability.

They felt smooth, reliable and instilled the right kind of confidence when darting around at the top end of third gear. Other European journalists had picked a mixture of Streetfighter V4, Super Duke and S1000R so the pace was decent to push the road-going characteristics of the tyres. 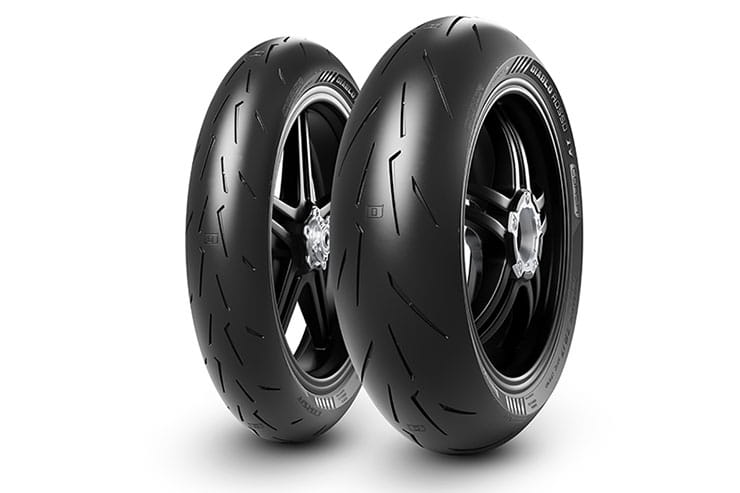 Pirellis have a premium feel about them: the looks, the tread pattern and even the neat 150th anniversary logo that’ll appear on the sidewalls of these DR4C’s until July as the firm celebrates is century and a half of operation. These latest and sportiest Corsa’s are a step up in super grippy track day-performing, road-going rubber. Tyre warmers will be rendered useless if you turn up to the track with these attached – they’ll warm up quickly and retain their heat too while you concentrate on eradicating any chicken strip evidence, and finding apexes never hit before.

If I owned a bike equipped with at least 150bhp and a set of 17” rims with a penchant for a handful of track days per year, then I’d be fitting it with these. The Rosso Corsa II might offer wet grip assurances, though at +£300 per set for the DRIVC, I’d be happy to compromise by swapping Costa for a home brew for a lap time saving. Then again, we live in the UK where it does tend to rain a lot. Maybe a set of Diablo Rosso IV Corsa should be reserved for a track bike, or a summer bike.