The Pirelli Angel GTs are designed as sport-touring tyres, but that doesn’t mean they’re only suitable for long distances at steady speeds. Over the past two years I’ve reviewed the original Angel GTs on a Yamaha MT-10, as well as the new Angel GT IIs on a Kawasaki Versys 1000 and a 1999 Kawasaki ZX-6R…. 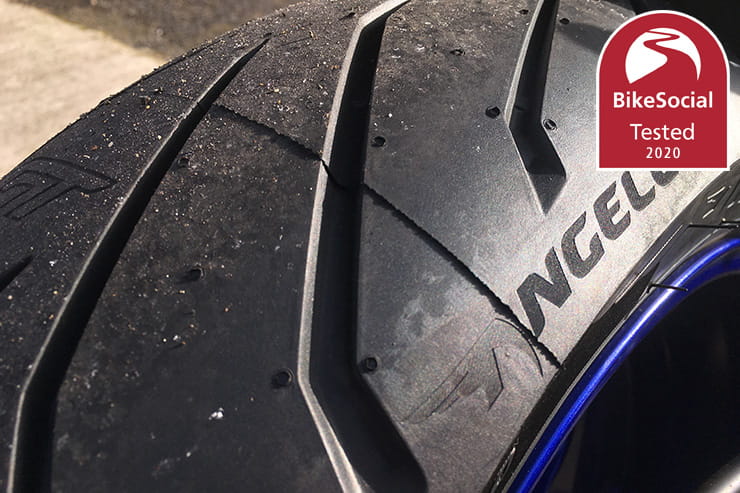 Freshly fitted to the MT-10, the Angel GTs and the Angel GT IIs require very little scrubbing in (though it’s still very important to take extra care at first)

Both the Angel GTs and the newer GT IIs are available, and there’s little difference, at least visually. Both use a dual compound, which means a harder central area for increased longevity, with the outsides being a little softer for grip. The main difference between the two is a pair of channels running around the middle of the new GT IIs, for what Pirelli says results in improved wet performance, increased stability and better grip. 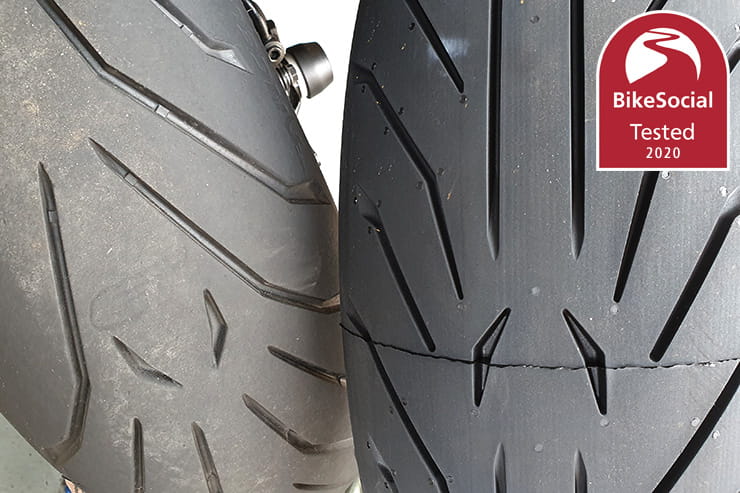 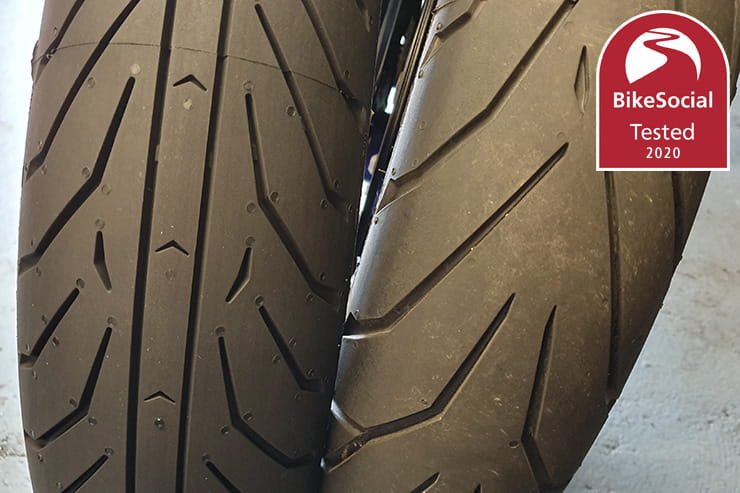 Here you can see the difference between the Angel GTs and the GT IIs, with the pair of channels running down the centre of the newer model

Pirelli talks of ‘variable cord end counts’, ‘multi-radius design’ and a ‘notable centre radius’, but what matters to most of us when buying the tyre is that it’s a relatively neutral profile that won’t feel twitchy like an extreme sports tyre can, yet doesn’t make for slow steering.

Pirelli says the Angel GT IIs are aimed at ‘Grand tourers’ – riders who extensively travel medium to long distances alone, and with pillion and luggage, on sport touring and adventure bikes. They also suggest ‘Smart urbans’, who ride super-sport, naked and adventure-tourers all year round, as well as ‘Free timers’ (these are their words, not mine) – people on super-sport and adventure bikes who only get to ride at the weekends.

Basically, the GT IIs and the original GTs are ideal for, well, anyone outside of a track hero really. 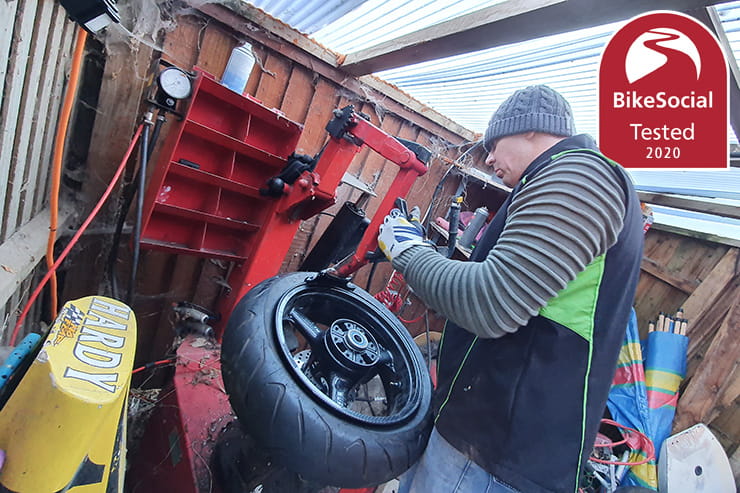 My mate fitted the Angel GT IIs to my ZX-6R wheels. The old tyres had been on there several years, and while they’d barely been used, they were rock-hard and extremely difficult to get off the rims. Don’t hang on to old tyres; it’s not worth it!

The Angel GTs and GT IIs are practical, all-round tyres that suit a variety of bikes, which is why I tried them on an old sports 600, a hefty adventure bike and a hyper-naked. I also chose these as they were one of the few tyres that has the 120/60 size required on the Kawasaki ZX-6R. The old front tyre was an easier-to-find 120/70 and rubbed the front mudguard, but the correct Angel GT II fits perfectly. The GT IIs are available in the following sizes (the ‘A’ means it’s designed for heavy-weight motorcycles): 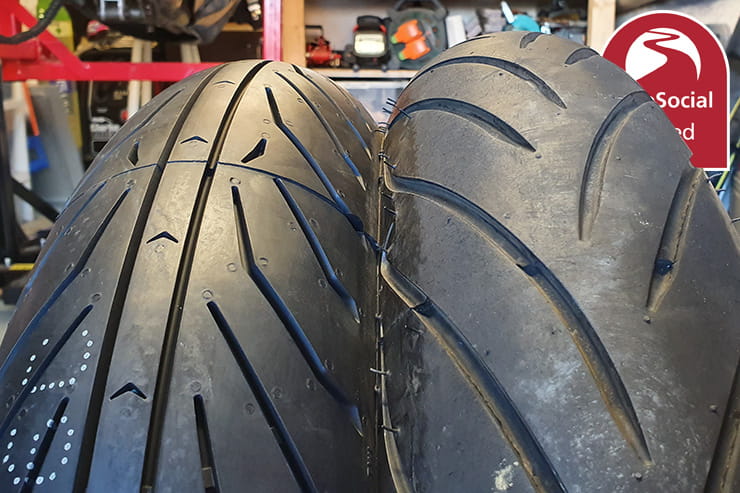 I used the Pirelli Angel GT IIs on track – not with the ZX-6R that you’d expect, but the Versys 1000 on Cadwell. The plan had been to take the old 600 to Oulton on a Bennetts Rewards track day, but then lockdown happened – all being well I’ll get out with it later in the year.

Running standard pressures, the tyres were faultless. The Versys did feel a little vague when cranked right over but that’s down to its weight, geometry and suspension.

If you’re a serious track rider, you’ll want something more sporty, but keep in mind that most track schools use sport-touring tyres and you’ll realise that you don’t need extreme performance for 99% of what the majority of us do.

While I haven’t had the ZX-6R on track yet, I have had my knee down with it; the GT IIs I have on there have been absolutely faultless, giving me more than enough confidence to push on.

On track with the Angel GT IIs

As mentioned, my 21-year-old sports 600 rides fantastic on the Pirelli Angel GT IIs, and so does the Kawasaki Versys 1000. What I really appreciate is the neutral handling, meaning that the bike feels planted at all lean angles (suspension permitting) and never wants to drop in or sit up as you turn. Think back to the days of the ludicrous, almost Toblerone-profiled sports tyres of old and you’ll know how much better it is to ride on a tyre that tips in consistently, helping you hold a comfortable line at any lean angle.

The original Angel GTs I had on the MT-10 were no different, giving excellent handling on what is a frankly ridiculous bike. Winding on the throttle exiting a bend, there was more than enough grip to dig in and let the front start to lift. There’s no lack of sport in these sport-touring tyres. 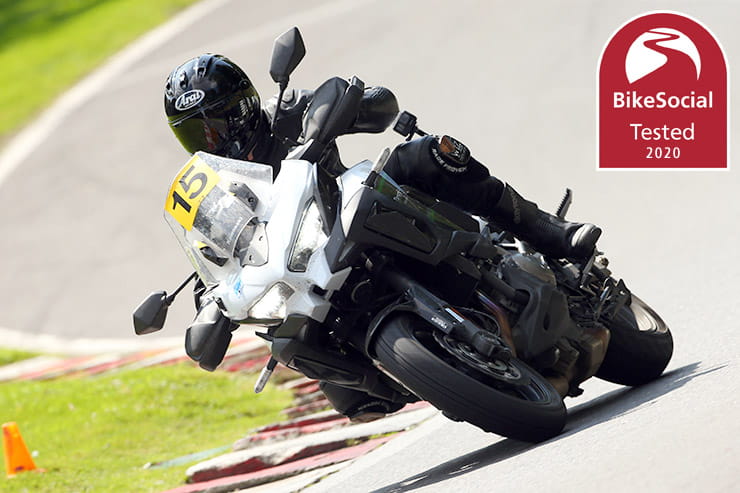 The Kawasaki Versys 1000 has had the most use in the rain, and it’s been out in everything from damp winter drizzle to torrential downpours. While I certainly do back off in the bad weather, I’ve never once had a ‘moment’ with the Pirelli Angel GT IIs on that machine – they’ve no problem shifting the water, even over two hours in the worst of the British weather. They were also great on a damp Cadwell circuit in the morning.

You’ve probably got the idea already, but the Pirelli Angel GTs and the GT IIs have given me complete confidence; it’s why I fitted them to my own MT-10 and my ZX-6R. 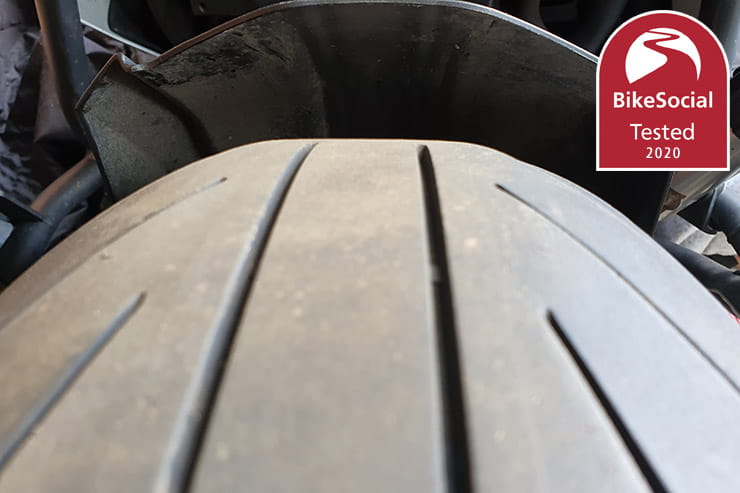 This is the rear tyre on the Kawasaki Versys 1000 after about 5,500 miles – it’s squaring off but still works fine.

The Versys 1000 is a relatively heavy bike, and I’ve done a lot of riding with it fully-loaded with luggage and often a pillion; unsurprisingly, after about 5,500 miles, the rear has started to square off.

Crosssing white lines and over-banding the bike starts to track a little – not to the point that it scares me, but that flatter centre profile has made a noticeable difference to the handling when upright. Still, I’d say I could get another 1,000 miles out of it, but as with all rubber, it doesn’t feel as good now. 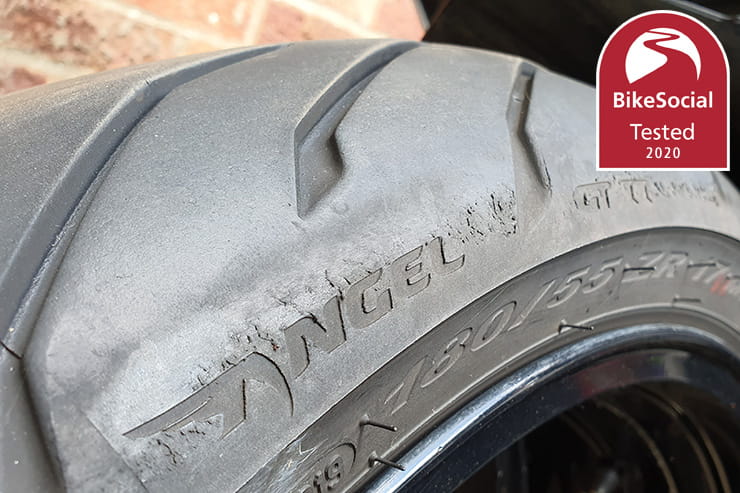 Having put thousands of miles on the Pirelli Angel GT and GT II tyres, on a real mix of bikes, I’d have absolutely no hesitation recommending them to anyone. Outside of fast track use, even on a sportsbike that’s ridden pretty hard on the road, I’d still opt for the Angel GTs – having fitted super-sports tyres to the Ducati Monster S4R I used to own, I know only too well how much harder it can be to get the necessary heat into the rubber. On the road especially, while it seems counter-intuitive, a performance tyre can be less grippy than a sports-touring tyre, which gets up to working temperature more easily.

The Pirelli Angel GTs and GT IIs really do prove that a good sports-touring tyre is exactly what most riders need.