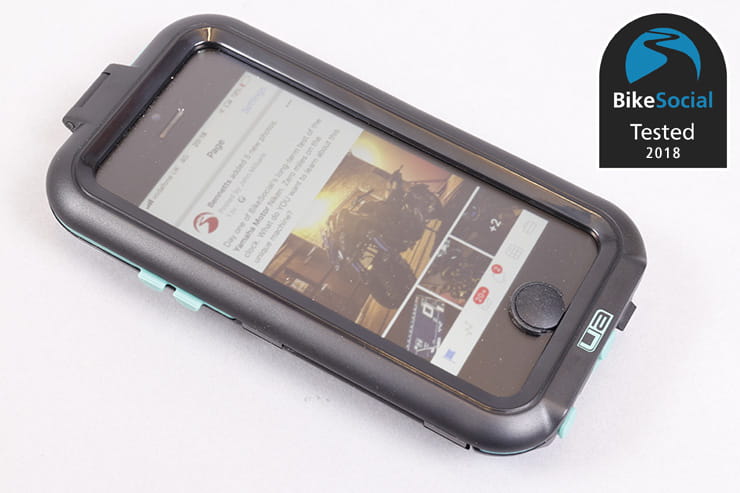 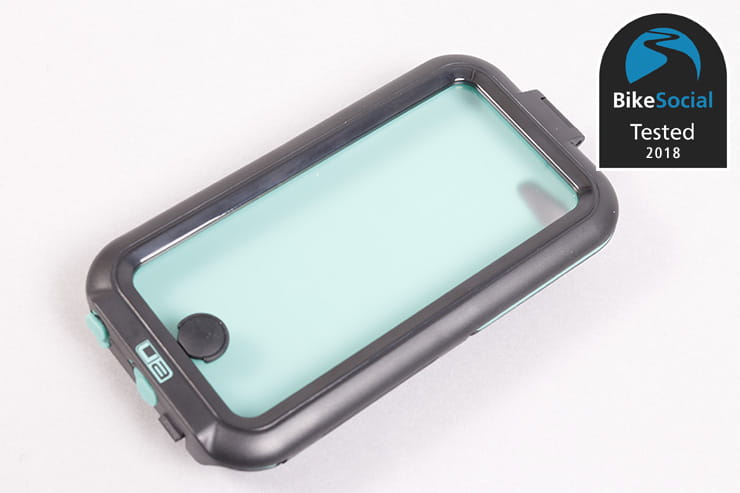 While I’m a big fan of dedicated motorcycle sat-navs, there are plenty of situations where this expensive device simply isn’t needed, or can’t be quickly installed; I’m often riding different bikes and need some basic navigation, but don’t have time to strip the motorcycle down to fit the power leads.

For the many people who don’t need the performance and features of a TomTom or Garmin, a mobile phone can give very usable navigation with the highly regarded and free Here WeGo, as well as the £35 MyRoute app. Whatever you choose though, it’s important your phone is mounted securely to the bike, and if it’s not already water resistant – like the iPhone XS, Samsung Galaxy S7, S8 & S9, LG G6 and Sony Xperia XZ (and to a lesser extent iPhone 7, 8, X and XR, and HTC U11) – you’ll need a case that’ll stop it being ruined when you ride in the rain.

Ultimate Addons started producing accessories for PDAs back in 2008, but with the advances in smartphone technology, and the fact that many members of the company are cyclists and motorcyclists, the brand has evolved to become known for its vehicle mounting solutions, covering phones, tablets, action-cameras and sat-navs. 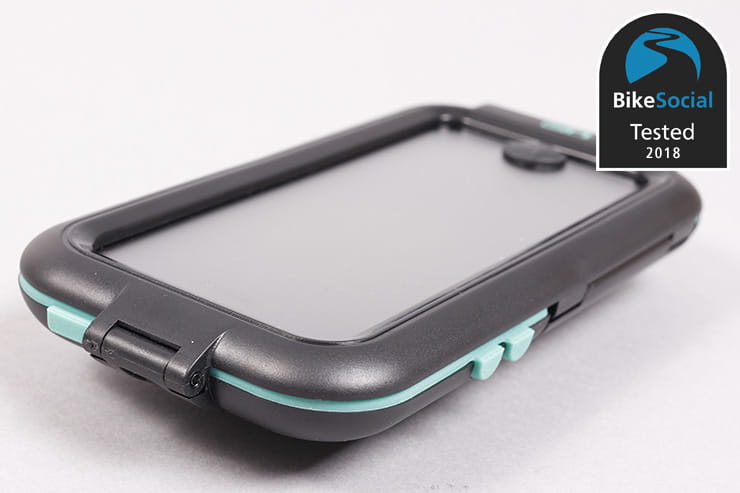 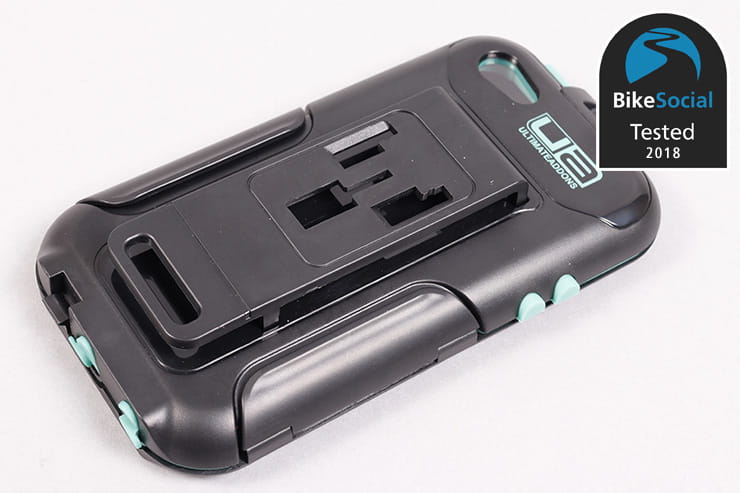 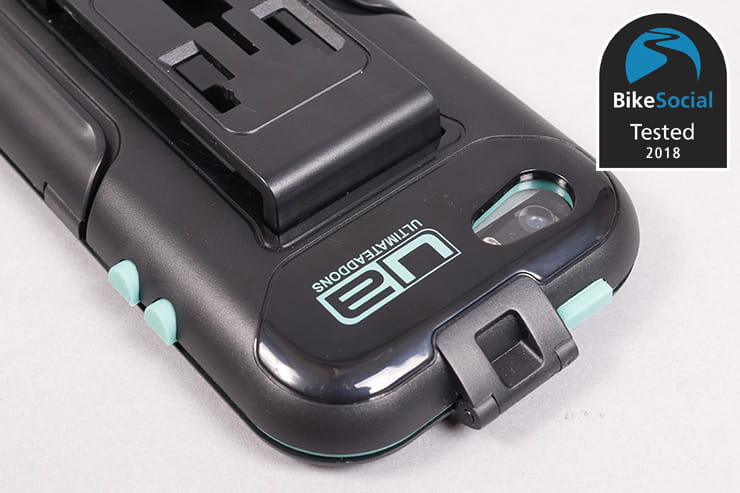 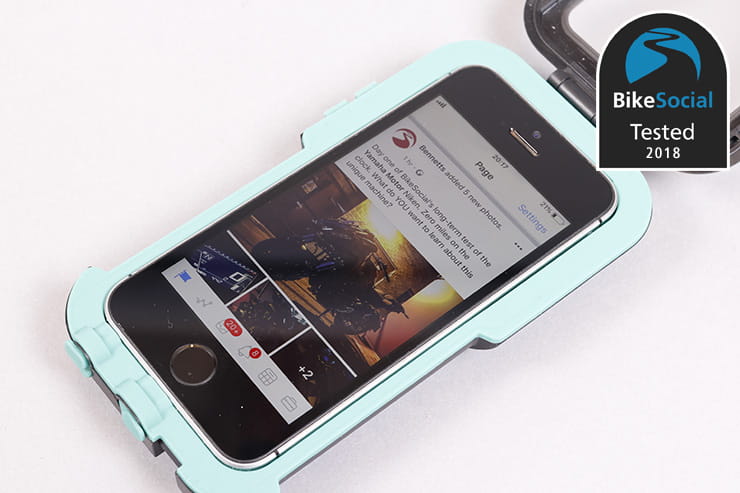 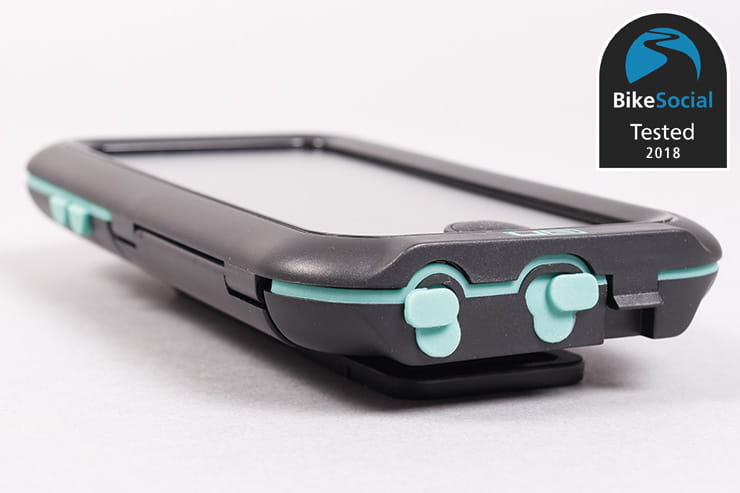 While new products are constantly being added, and universal cases are offered, specific models are currently available for the following phones:

I’ve used the kit to mount my phone on my Honda Africa Grom, as well as various test bikes…

A lot of thought has clearly gone into the design of the Ultimate Addons parts – the plastics are well finished and feel of a high quality… they’re certainly not brittle like some copies can be.

The £22.99 case for my iPhone SE is one of the earlier designs, and having looked at those available for the newer phones, it’s not quite as slim or easy to use as those for the latest Samsung and Apple devices; a long clip on either side flips open, then a tab is pulled on the front to lift the lid and insert the phone, which sits very securely in a shock-resistant surround. You will of course need to remove any existing case from your phone in order for it to fit, unless you find it works in one of the larger, universal-fit cases.

Those long catches are a great example of the build quality – rather than having a flexible plastic ‘hinge’ that would eventually wear and break, the Ultimate Addons case uses proper pivoting hinges. 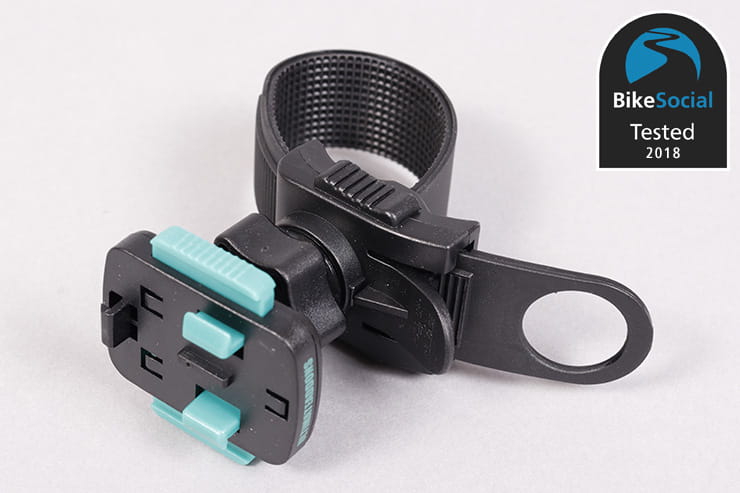 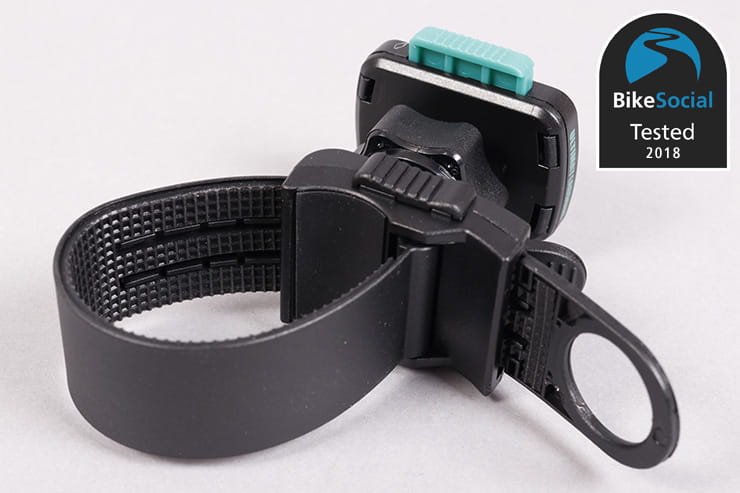 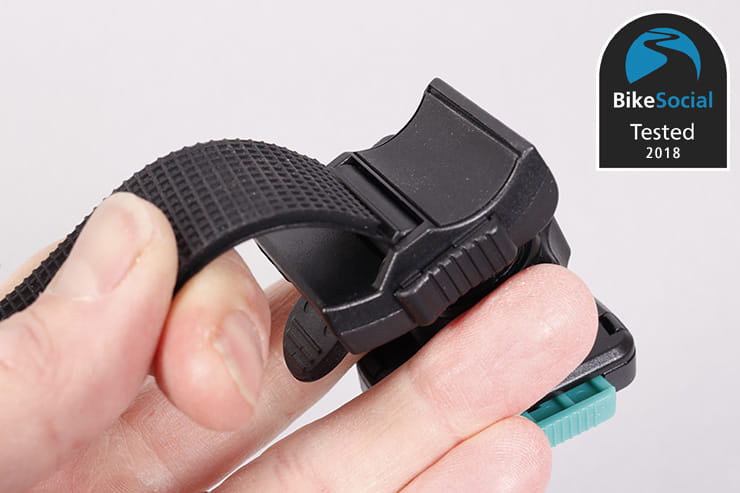 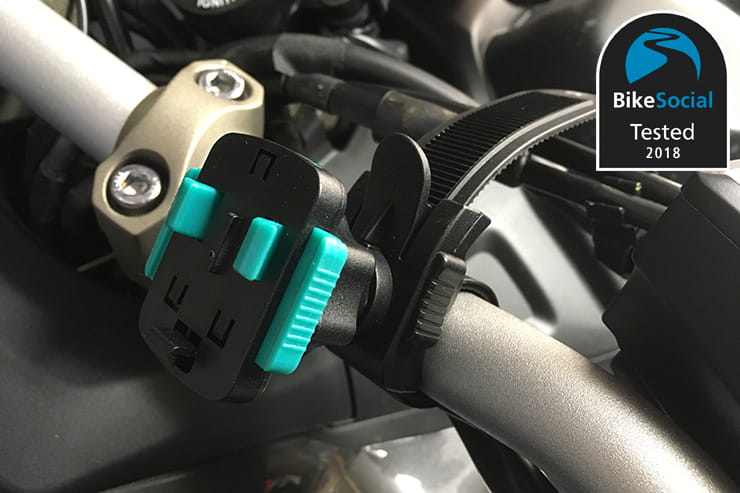 The locking strap is a brilliant design, allowing you to swap it between bikes with ease

It’s the same on the £12 Locking Strap, which I use on motorcycles (and my push-bike) when I need to fit my phone quickly – the strap that wraps around your handlebars is on a pivot that allows full movement without any wear. It’s also got a rubbery layer bonded to the inside edge, so it won’t slide around.

Besides the spring in the attachment unit, and the stainless steel bolt and aluminium spacer in the £28 Top Clamp attachment that I’ve used on my Honda MSX125 (the Africa Grom), there are no metal parts used, which means you won’t find this kit going rusty after a few months.

The ball and socket in both the Top Clamp Attachment and Locking Strap give a good degree of movement while locking very firmly. 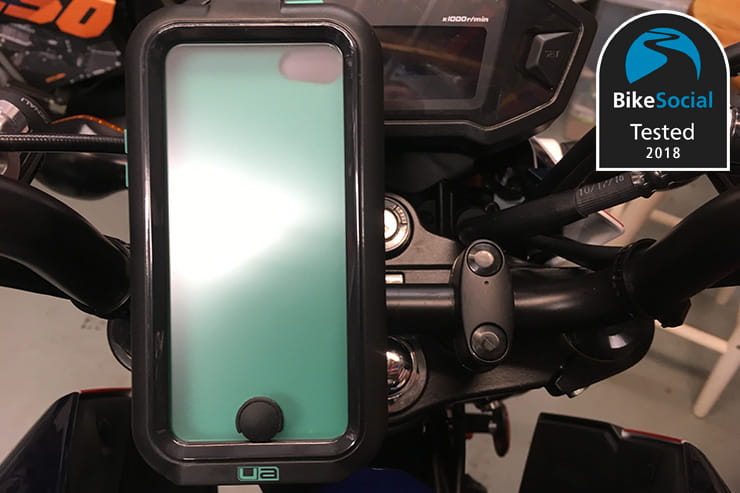 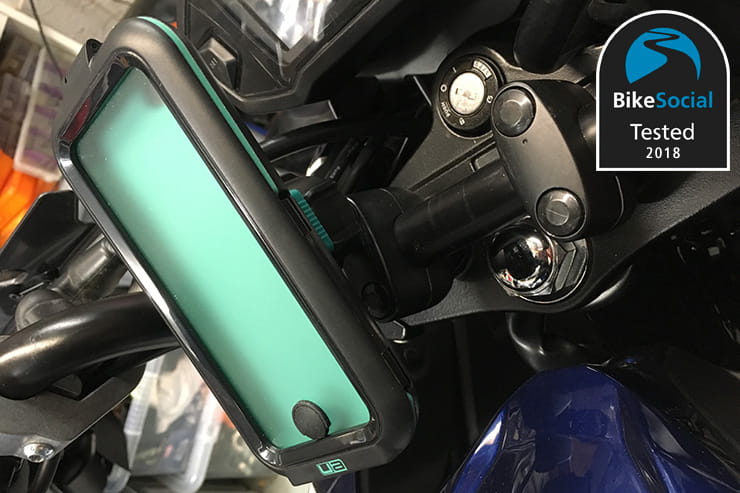 Fitted to my Honda MSX125, the phone is held solidly

The ‘three-prong adaptor’ is Ultimate Addons’ universal clamp – pop the case onto the fixed lower catch, then press the two blue buttons and snap the case down to lock it in place. It’s quick, easy and secure. If you don’t press the buttons, the case can be forced down, but it feels a little brutal, at least on the one I have. It is possible to click the case on but it not be fully secured – just give it a wiggle to check. A lanyard is supplied with the cases, which you could loop around the adaptor for added peace of mind, but I haven’t felt the need.

Some of the newer cases manage to retain their sealing while including thumb-print reader compatibility with a thin membrane. On my SE case there’s a rubber button, so you need to use the PIN to unlock the phone. I also find I have to make sure the phone is in just so, or the button keeps pushing down on my home key – once I realised what was happening though, it was generally easy to get it right from then on (sometimes the button needs a quick jiggle to settle it). With it correctly seated, there’s a good, tactile feel, but I did end up shaving a small amount off the bottom of the button (inside) with a scalpel, which has meant it’s a lot quicker and easier to drop the phone in now.

The screen retains its touch sensitivity in use, and doesn’t trigger when it’s getting rained on. Of course, the sealed nature of these cases means that you can’t very well use the phone for calls unless you have a wired or Bluetooth headset, so although it does make for a very rugged case, you probably won’t keep it on when you’re not riding; you can hear calls okay, but your voice is extremely muffled to the other person.

The camera and ‘flash’ LED are both fully useable – only the mute button is blocked when the phone’s in the case. If you want to use the headphone socket, you might need a slim extension if your headphones’ jack won’t fit, but the ones that came with your phone should be fine. 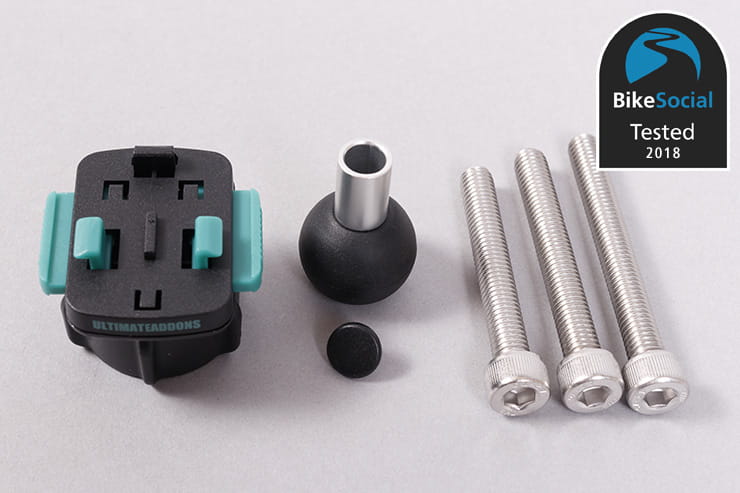 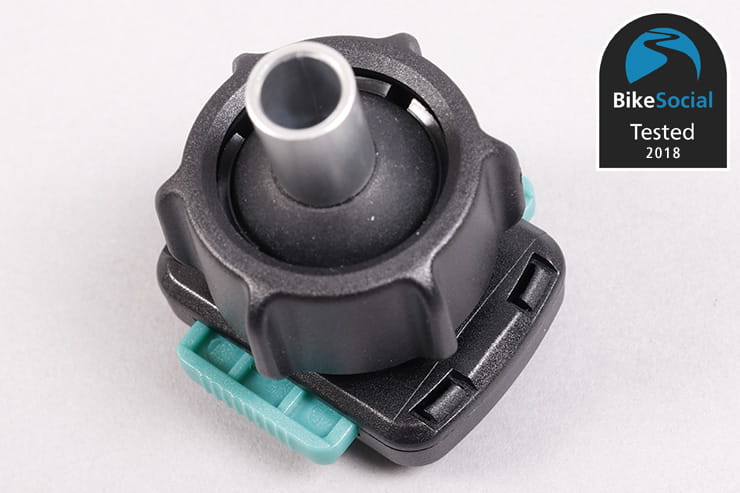 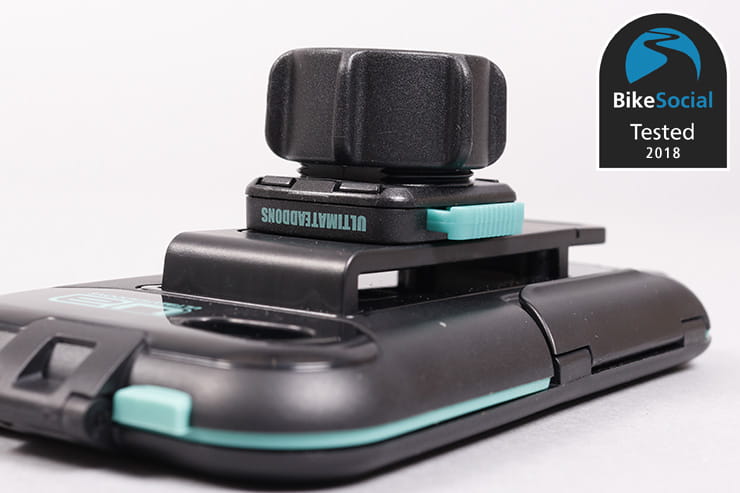 I’ve used the £28 ‘Top Clamp Attachment’ on my Grom – this is a ball that replaces one of the handlebar clamp bolts, then the three prong adaptor fits on top, giving 360° of rotation and a large amount of tilt. It’s extremely tidy, and three lengths of bolt are supplied, so you can choose the one that works for your bike. Kits are available in M6, M8 and M10 – mine was M8 and I needed the middle of the three lengths.

The ‘Locking Strap Attachment’ also gives the versatility of a ball-joint, but is mounted to a long strap that can surround bars from 21 to 40mm in diameter. The strap has a finger hole that makes it very easy to pull tight, and while you’re usually left with a fair bit of slack, it’s so universally handy for swapping between various bikes and cycles that you really don’t care.

The rubber grip stops it spinning on the bar, and while it won’t lock to prevent theft, the thumb catch is very secure, and won’t let go until you want it to. 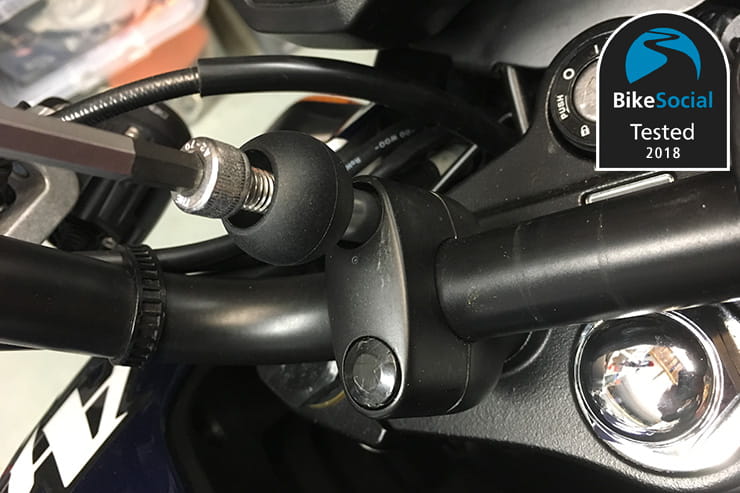 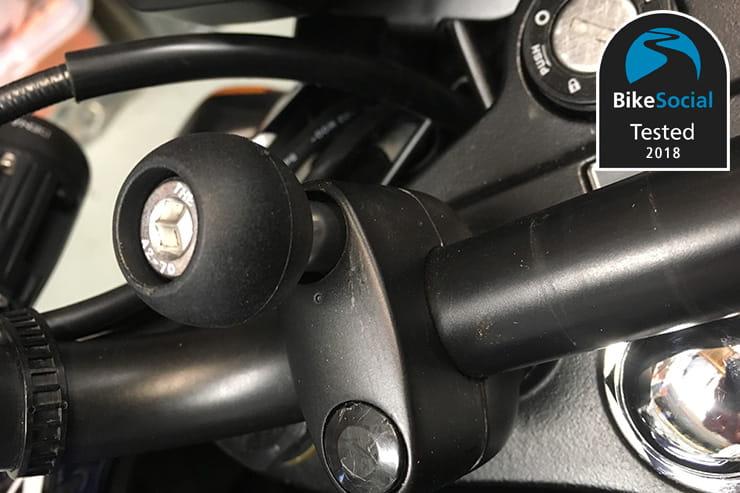 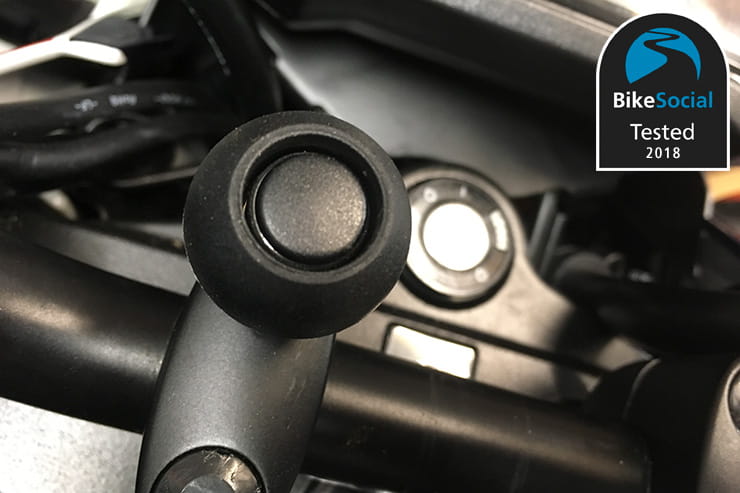 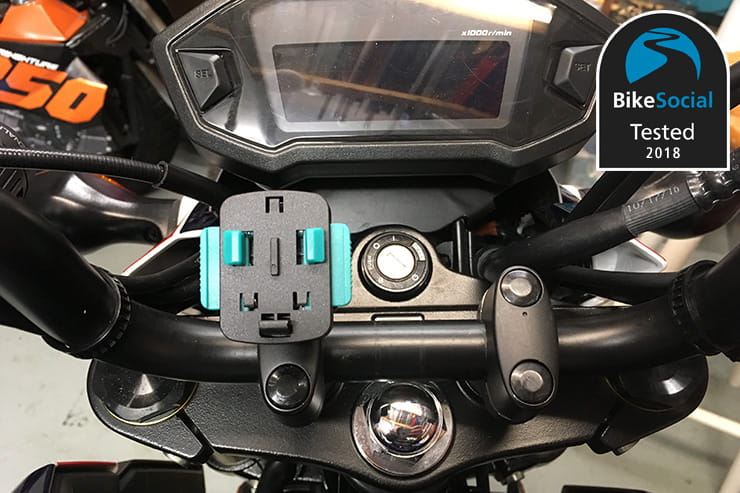 Fitting the ball is simply a matter of removing one bolt and replacing it, before topping off with a blanking cap

The case is rated IPX4, which means it protects from splashing water, but mustn’t be immersed. On the bike, that means it has kept my phone dry, but in really heavy rain it’s possible that water could creep in. The most vulnerable point on my case is the headphone port, but this wouldn’t be in the line of fire of driving rain as it’s on the bottom.

Some of the newer phone cases are rated to IPX5, which means the device is protected from water jets. In practice, that does mean it could still let some water by in extreme circumstances, though of course many of those newer phones are already water-resistant, so it’s less of a problem.

There are silicone-capped ports for charging and headphones, though using them while riding will of course reduce water-resistance. Cases for newer phones come with dedicated charging cables that maintain the seal. 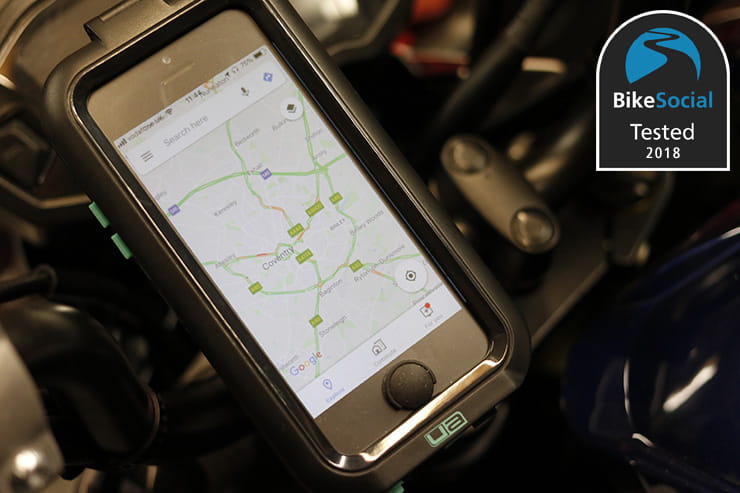 As it can’t guarantee to keep your phone totally dry on long journeys in extreme weather, you do have to be cautious. But if you’re a very serious tourer, you’ll likely have a dedicated, waterproof sat-nav.

The Ultimate Addons kit is perfect for the person who needs to use their phone every so often on the bike – the various semi-permanent mounts like the Top Clamp Attachment work very well and look neat and tidy, while the Locking Strap Attachment is a piece of design genius; brilliantly implemented and easy to use, it’s pretty much a biking essential.