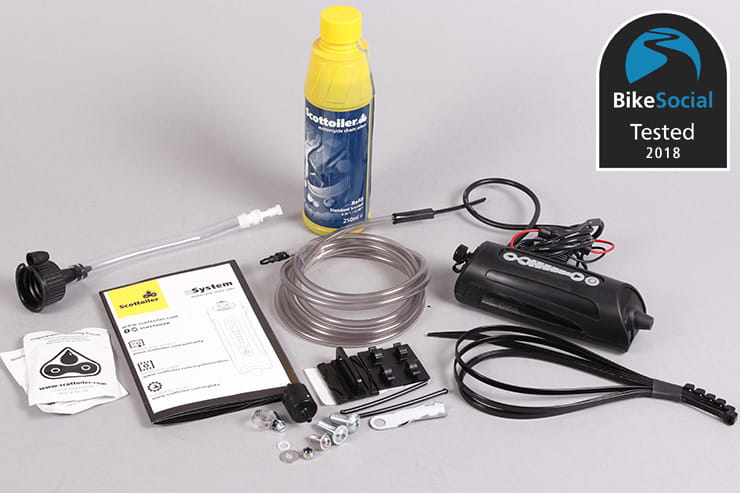 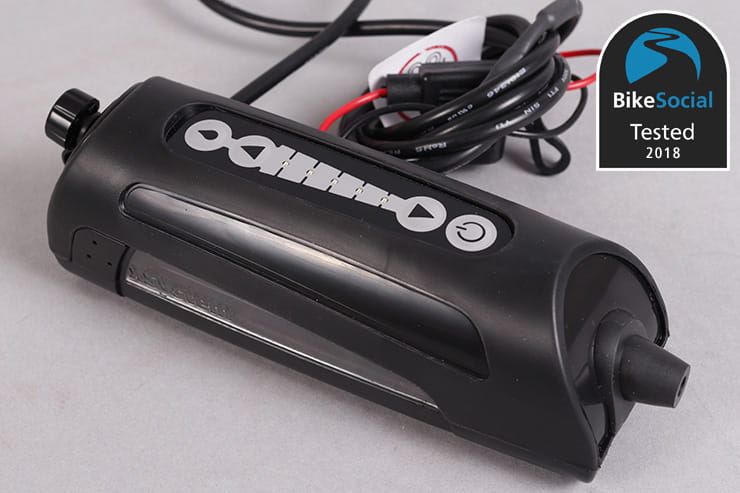 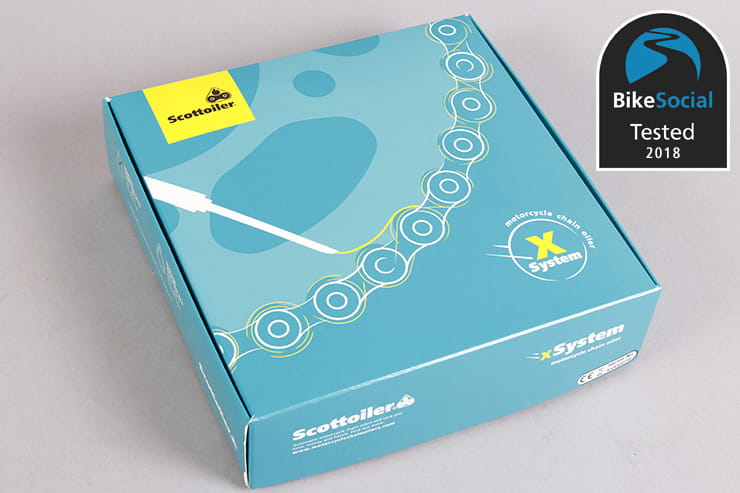 Fraser Scott designed the first Scottoiler in the 1970s, after the chain on his Suzuki 750 wore out through riding from his home in Glasgow to his girlfriend’s in Manchester most weekends. Since then, the company has grown to become a Worldwide brand, now led by his daughter, Fiona Scott.

It was the late nineties when I first fitted a Scottoiler automatic chain oiler to one of my bikes – the benefit of keeping the chain lightly lubricated was clear, but the hassle of tapping into the CBR600’s carbs to allow the device’s vacuum-activated valve to work meant it was a long evening’s work.

The latest design of that vSystem – which doesn’t affect your engine’s power in any way – is still available for £99.95, but the new xSystem promises to be much easier to install thanks to fully-electronic activation… 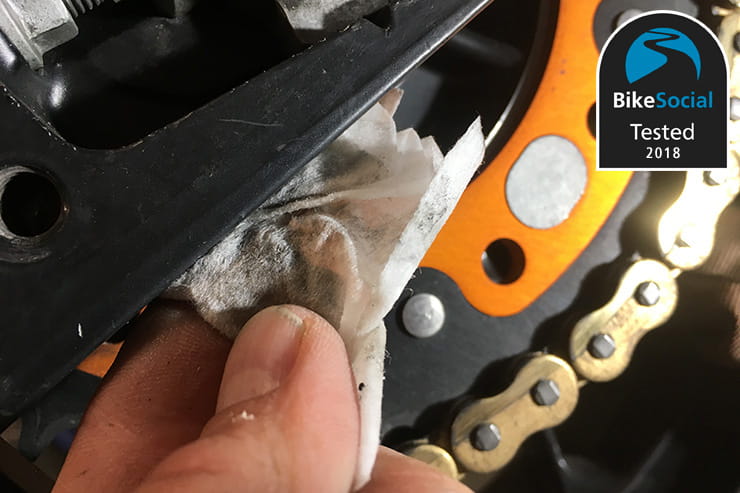 I fitted the xSystem to my KTM 1050 Adventure – the hardest part was simply working out where to put it.

Once I’d settled on one of the frame rails to the left of the engine, the bracket that holds the main reservoir / control unit just needed zip-tying in place, then the pipe routed down to the rear sprocket. There’s only a live and neutral connection to the battery, and the wires are pre-terminated in open spade connectors, meaning you don’t have to fully remove the screws from your battery and risk disconnecting other devices (so no need to re-programme your bike’s clock!). 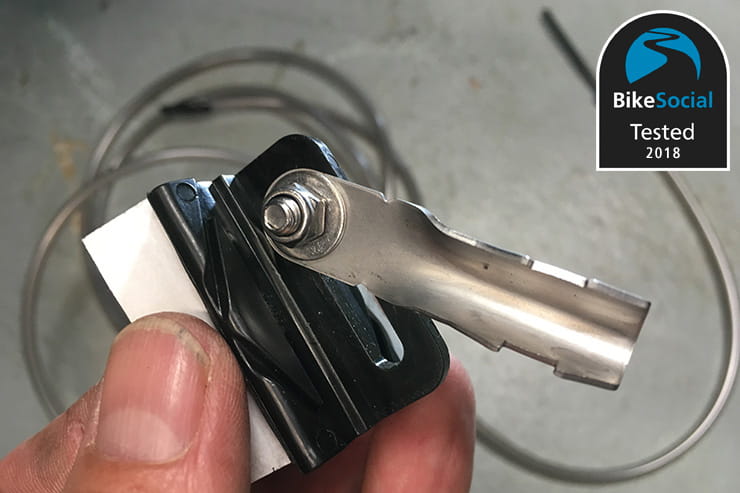 The dispenser tip, which delivers oil precisely to the chain, is held in a deformable clamp to get it positioned just right, and in turn fits to a self-adhesive bracket (which can also be held with zip-ties). The clever design of this bracket means it can be shaped to suit your bike’s swing-arm; I had no problem on my KTM.

The oil supply pipe is held in place with small clips, and just needs a non-return valve adding at an opportune spot.

Once installed, while there are a couple of zip-ties visible, the overall installation looks tidy. Of course, the quality of this will depend on you or your fitter, but take your time and it shouldn’t spoil the lines of your bike.

I positioned the reservoir (which holds about 60ml) so I could fill it from the supplied 250ml bottle of Scottoil without taking it off the frame, but if you need to, the bracket makes it very easy. The final step is to prime the pump and get oil right down to the rear sprocket; this can take a good few minutes of repeatedly pressing the prime button, but once done, it shouldn’t need to be touched again. 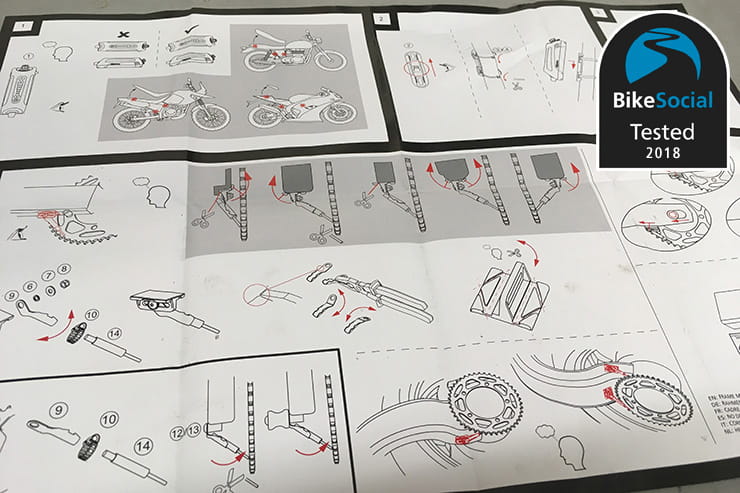 The instructions are easy to follow and simply laid out

Over the first few runs, you just need to keep an eye on how much oil the Scottoiler is delivering – you can’t set it to a point that it’ll flood your tyre with oil, but if you notice an excess of easily-removed spatter on the underside of the bike’s tail, or on the wheel rim, you can very easily adjust the flow rate with the buttons on the reservoir.

I noticed hardly any fling from the first time I used the Scottoiler, but the KTM does have a very effective chain guard. 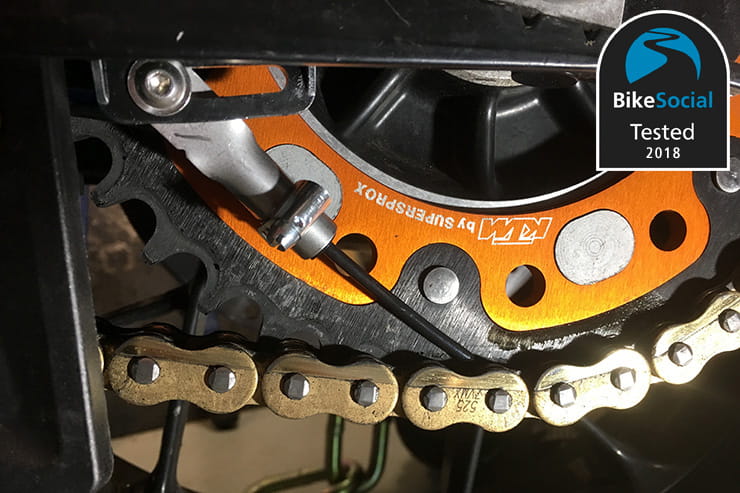 Oil is fed to one side of the chain, but it finds its way onto both O-rings

The advantage of what is effectively a constant-loss lubrication system is that any dirt can’t collect on the chain. If using a can of chain lube, it should be applied and allowed to set before riding, to avoid it staying sticky and holding grit, but the Scottoiler keeps the small O-rings in the chain well lubed and clean at all times – even off-road. There has to be some fling for the xSystem to be effective, but as it’s just a very light oil, it’s easily wiped away if it does get past the chain guard.

There are various schools of thought over chain lubrication – some people believe that it’s best to not lube a motorcycle chain at all, but my mechanical sympathy tells me that moving parts need lubrication. 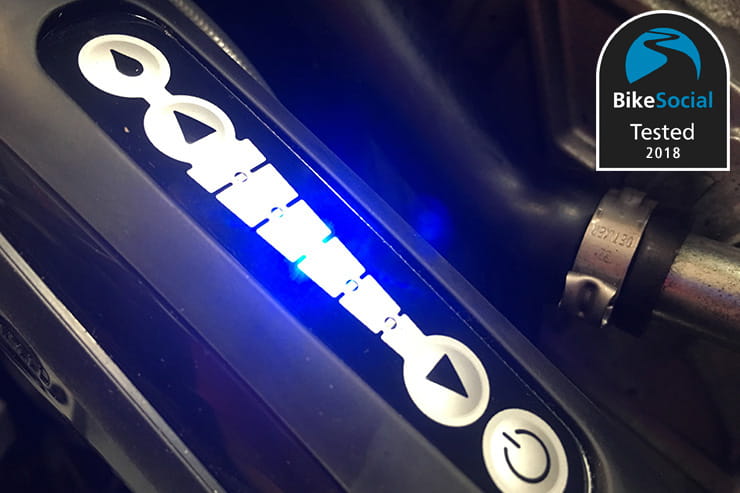 Current drain when asleep is very small, so shouldn’t affect your bike’s battery

The Scottoiler has a three-axis accelerometer built in that detects when you start moving, and that’s said to have been optimised to work on all surfaces, from smooth motorways to bumpy off-road trails.

The xSystem can be turned off fully, where it has no impact on your bike’s battery, but you’ll need to remember to turn it back on. It’s designed to be left on all the time, and automatically goes into a sleep mode. I checked using a multimeter, and when you’re not riding, the Scottoiler draws just 1.78-2.38mA, so nothing to worry a typical 12Ah motorcycle battery, which would take about 250days to go flat with this current drain.

When you’re riding, the device draws around 33mA with each drop, so a tiny amount (at intervals) that will have no impact on your motorcycle’s charging output.

I have an excellent PDM60 on my bike – a solid-state relay and fuse system that isolates all devices; it’s a shame that I can’t connect the Scottoiler to this, as it won’t power itself back up when connected to the battery, but with such a tiny current draw, it’s really not worth worrying about.

Because the device only needs power direct from your battery, it’s fine to use on CANbus-equipped motorcycles. 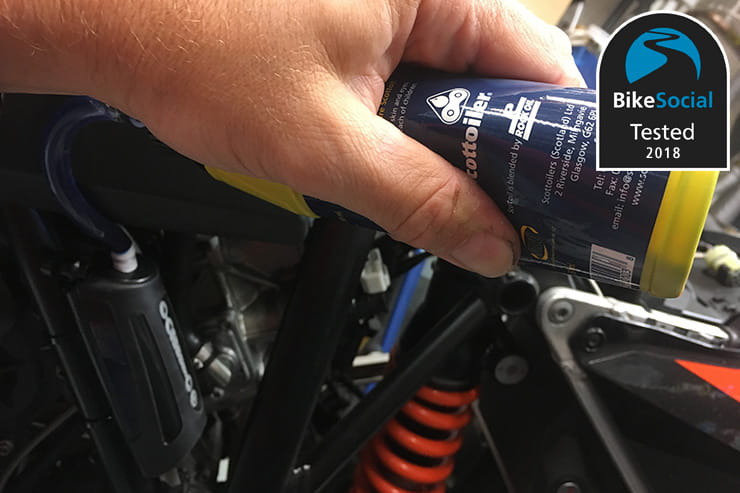 Refilling is easy, and you won’t have to do it that often

While using a Scottoiler results in much less hassle cleaning the chain, you do need to wipe any excess off every so often, but with the correct setting (which is very easy to adjust), you’ll not need to do it much. You should also see far less build-up inside the front sprocket’s cover than you’d get by using canned chain lube, but it’s worth a check every so often.

I’ve not had a Scottoiler fitted to all my bikes in the past – just the ones I used most in the winter, but the new xSystem is so easy to fit, I intend to use it on all my bikes from now on; with replacement parts readily available direct from the Glasgow company, and fitting so simple, there’s no reason not to move it between motorcycles.

If you could find space for the reservoir under your seat, it wouldn’t be an issue, but otherwise the Scottoiler is a little vulnerable to tampering, but even if you were unlucky enough to have someone fiddle with the settings, it can’t be pushed so far that it’d cause a dangerous amount of oil to be pumped out.

A cleaner chain, less hassle and more consistent lubrication – what’s not to like? 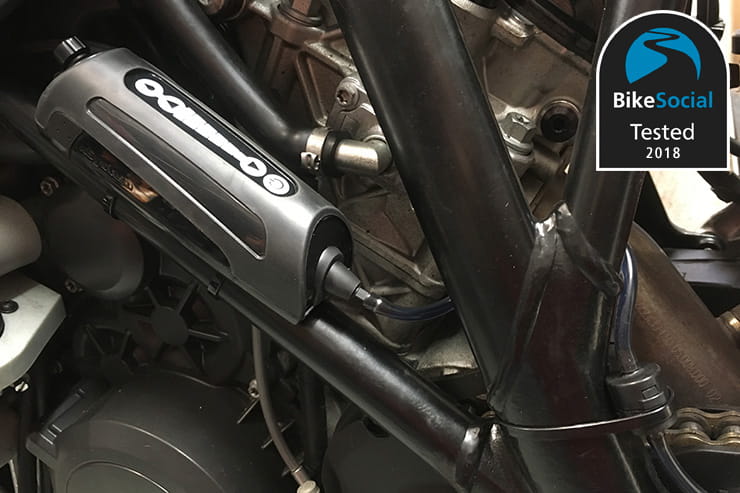 “I've had it fitted from new as I got it as part of the deal when I bought the bike. I was a bit sceptical about Scottoilers to be honest, but now I wouldn't be without one. My Africa Twin has done 25,000miles and the chain and sprockets are still in great condition.

“I have the standard single-tip dispenser and am amazed at how clean it keeps everything, even on dusty gravel roads. The only fling I get is a small amount on the rim, number plate and pannier – I’ve had no issues at all with oil getting on the tyre.”