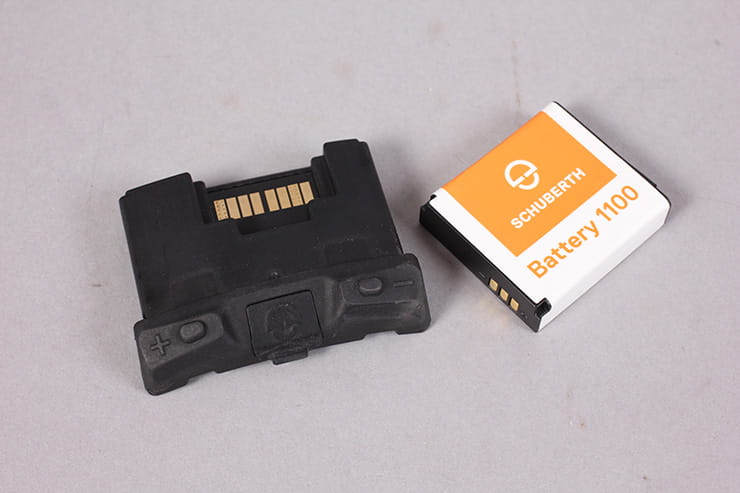 The SC1 is a Bluetooth rider to rider and rider to pillion intercom system built by Sena specifically for the Schuberth C4 and R2 helmets. I’ve been using the ‘Advanced’ version for the last six months in a C4…

The C4 helmet comes pre-installed with speakers and a microphone, so you simply need to press the battery and the control unit into the two slots on the bottom skirt of the lid – it really couldn’t be any easier. 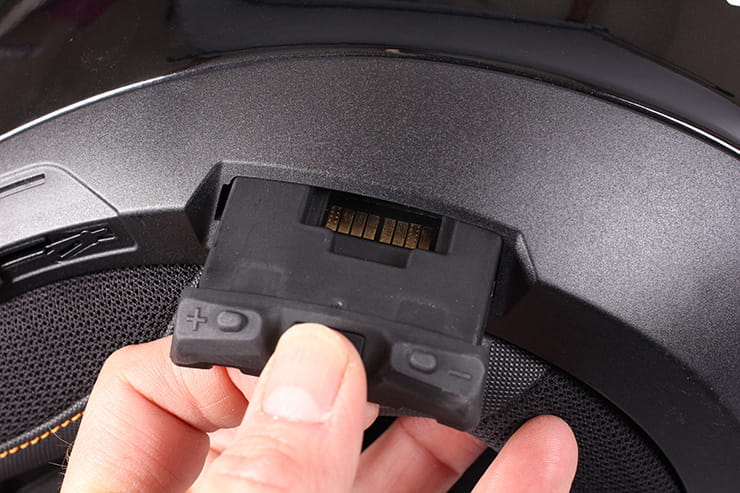 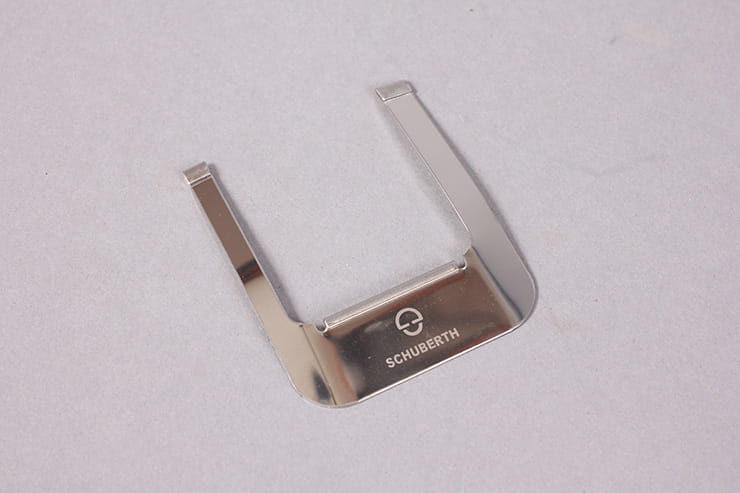 Fitting is very simple, and a tool is included to remove the device, should you wish to

The SC1 SRC connects via Bluetooth to your phone, sat-nav and other intercoms – there’s no wired input. 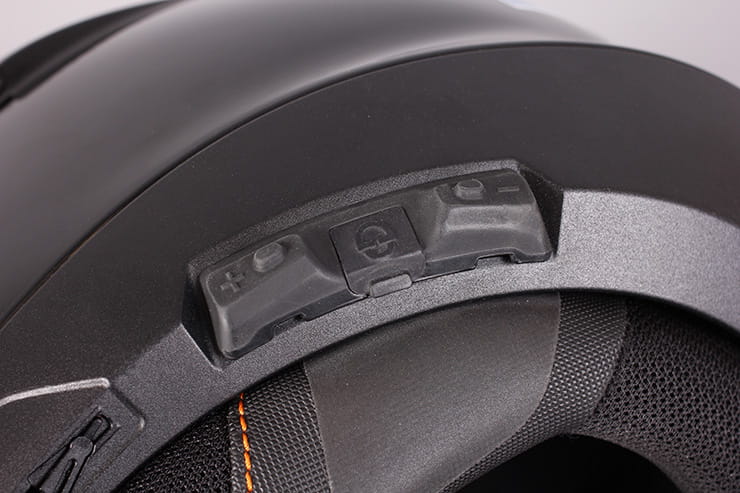 The SC1 is controlled by two small buttons on the unit

There are just two small buttons on the unit, which sits on the lower left of the helmet. These are quite small and tricky to operate, especially with winter gloves on – even turning it on and off is quite awkward, while having to hold the button for three seconds to skip a music track is a long time with your hand off the bar, albeit the left.

Pausing the music requires holding the ‘+’ button for one second, which isn’t much, but can be frustrating when you need to listen to your surroundings – it’s a small point, but I’d prefer an instant mute. Fortunately, a remote can be paired with the device, for instance the £99.99 model from Schuberth, which is a lot easier, but it’s a shame – particularly at the price – that one isn’t included. A cheaper option would be the Sena RC3 remote, which retails at £47.80 – while it’s not listed by Schuberth, I tested it and found it pairs and operates without any problem. 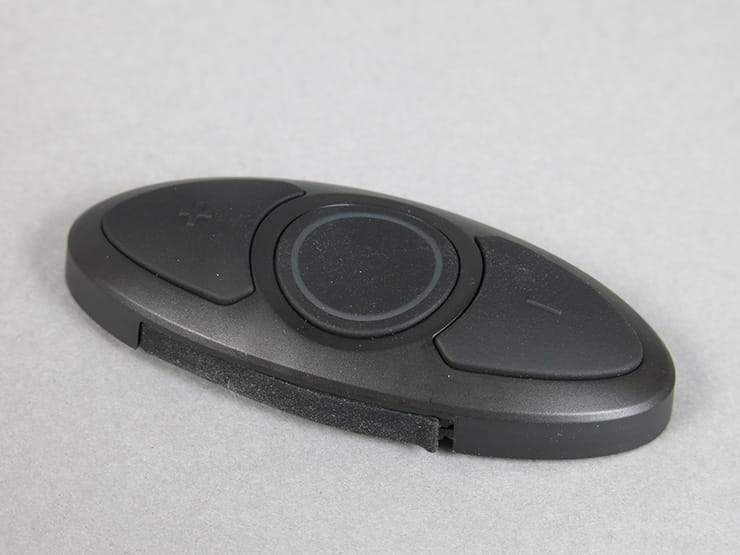 The Sena RC3 remote would be an option for improved control

A Schuberth-branded app is available for your smartphone, which works in the same way as the Sena app for other devices – this makes setting up the device more simple, and also gives access to the user-guides. It’s available for iOS and Android, though at the time of writing, while it worked fine on iOS, it wouldn’t work on a Vodafone-branded Android device. Sena’s own app was unaffected with other Sena devices, working without issue on iOS and Android. The Sena app is fully compatible with the SC1 on iOS, but again fell over on Android. 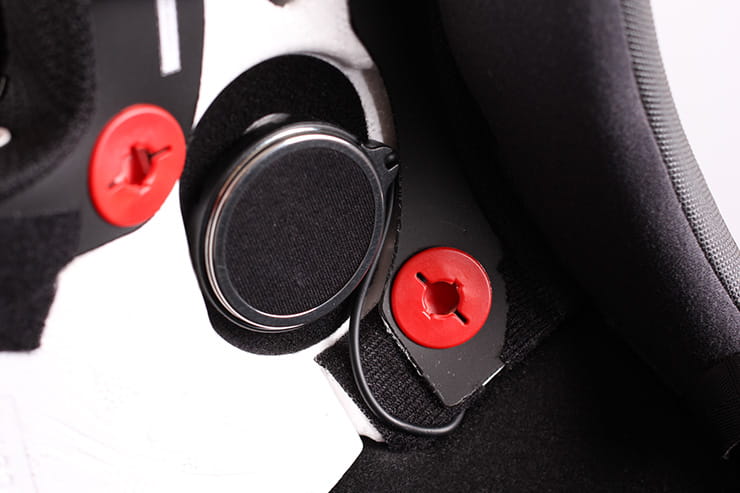 The speakers are pre-fitted in the Schuberth C4 helmet

It’s important to note that Sena devices are generally delivered with ‘Audio Boost’ turned off; in this case I find them too quiet, but switch it over – either by using the app or cycling through the configuration menu manually – and it’s much improved.

Audio quality is very good, though even with boost turned on I find this a little quieter than some other intercoms, including those by Sena. I listen through earplugs, so the speakers do need to work hard; with this helmet and intercom combination I tend to use the Auritech Biker earplugs, which allow audio and speech through more readily.

Speech quality is good, with callers on the phone commenting on the clear audio. Quality to other riders will depend on their helmet, but the Schuberth C4 is a quiet lid, so tends to give good results.

Using the same locations as other intercoms I’ve tested, and with two Schuberth C4s carrying SC1 intercoms, the range with a clear line-of-sight on open flat ground was approximately 550m. In a busy town location, range is reduced to around 380m, while in a housing estate connection was lost within 130m, after a building broke line-of-sight.

The SC1 will automatically reconnect with a lost device, but took some time, establishing speech again when I was much closer to the other unit.

While I’d hoped the Schuberth C4 helmet’s inbuilt antenna might give better performance than other intercoms, the range is fairly typical of other devices I’ve tested from both Sena and Interphone, with Sena’s own 10U giving a line-of-sight range of up to 790m.

Like most other intercoms I’ve tried, the radio isn’t always fantastic – reception is very hit and miss, with a ride up the M11 proving it to be far too frustrating, constantly losing reception and attempting to retune. More local rides of ten or so miles are usually fine.

You can only scan up through the frequencies using the buttons, not down, so don’t miss the station you’re after. Turning the radio off or muting it takes a frustratingly long three second press of the minus button. 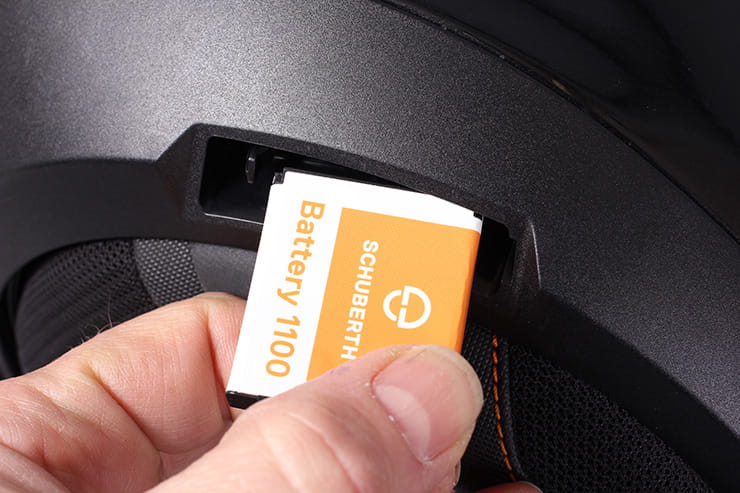 The battery life is extremely impressive – claimed to give up to 14 hours of talk time, my standard test of playing music at full volume saw the SC1 run for a massive 18hours and 50minutes.

The battery is easily replaceable, which isn’t the case on most other devices, but I did find – after disassembling it for photography – that the battery wouldn’t give a secure connection inside. This was cured by popping a small piece of foam under the cover, keeping pressure on the battery – it appears the internal connections had weakened, so if knocked the unit would shut down.

While the smartphone app will tell you if the device requires a firmware update, you need to plug it into a computer to do it. This is very easy, with step-by-step instructions on the application, which is available for both PCs and Macs.

The SC1 is very simple to install into the Schuberth C4 helmet, but while BikeSocial always avoids judging products on price, this does seem a relatively costly solution, considering you’ve already paid for the speakers that come inside the helmet, and the controls really need to be supplemented by a remote.

I’ve tested the SC1 SRC Advanced model, but an SC1 SRC Standard is also available for £199.99, which would leave some money for a remote. Keep in mind though that the claimed talk time reduces to nine hours (despite it being the same 1100mAh pack), there’s no radio, and you can’t share your music with another intercom user. Both devices though can connect to up to three other riders/pillions for conference speech, so it’s worth considering how you’ll use the SC1 before deciding which model to buy.