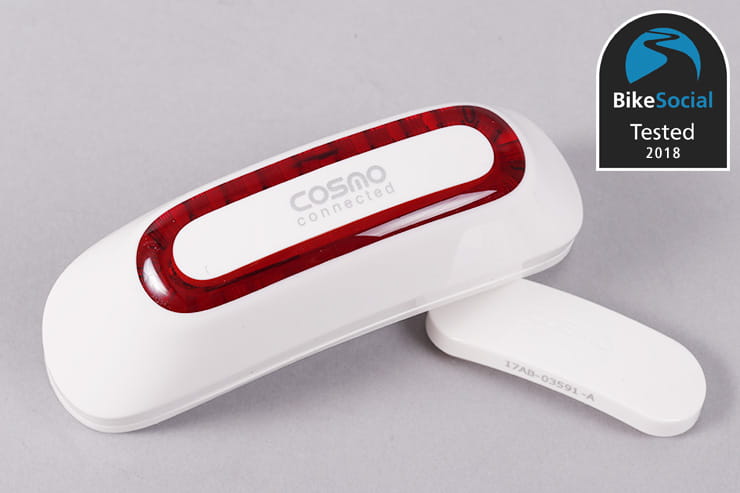 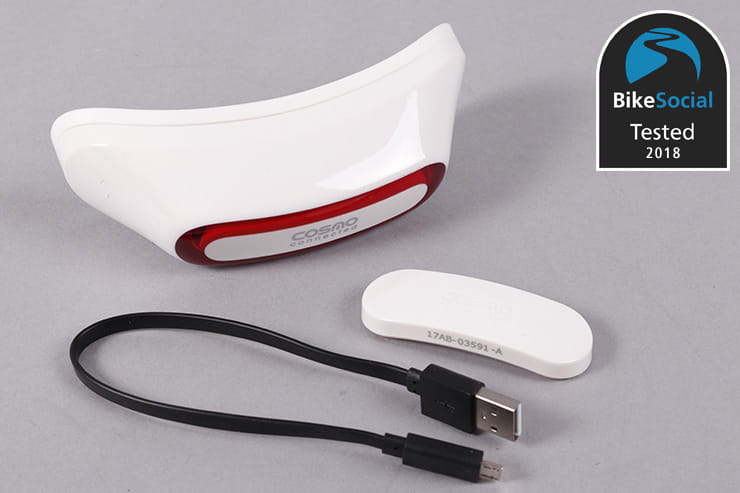 Much like the high-level lamps fitted to most cars, Cosmo Connected puts an extremely bright, self-contained tail light and three-axis accelerometer and gyro-controlled brake light on the back of your helmet, providing much greater visibility. It also promises to alert up to three contacts if you have an accident. At £129.99 it has the potential to be a fantastic addition to any rider’s kit…

The Cosmo fits to your helmet with a strong magnetic base – a supplied alcohol wipe cleans the surface before sticking it in place with its adhesive pad. Very simple and effective, and in the event of a crash, the device would roll off, so shouldn’t be able to put any undue stress on your neck, or overload that area of the shell. I’ve got in on a Shoei Neotec II, but it fits easily on most lids; for a list of those already tested, click here. Don’t worry about it falling off in normal use though – the magnet is very powerful.

In order for the crash alert system to work, the device needs to be paired with an android or iOS smartphone; as long as your Bluetooth is on, this couldn’t be easier – it really does take just seconds.

If you want to use the Cosmo on a second helmet, or you take a pillion and want to swap it to the back of their lid, you can buy a pair or additional magnetic bases, though these are a hefty £24.99.

You can buy the device (and bases) in gloss white, gloss black or matt black. Including the magnetic base, it weighs just 148g, so you don’t notice it on your helmet. 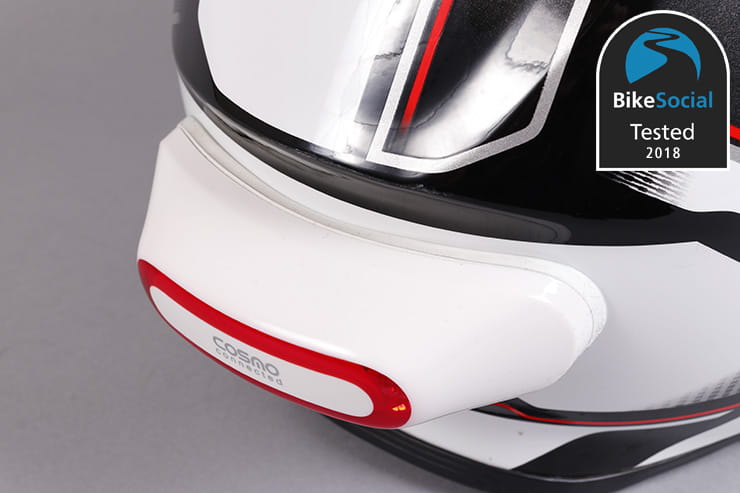 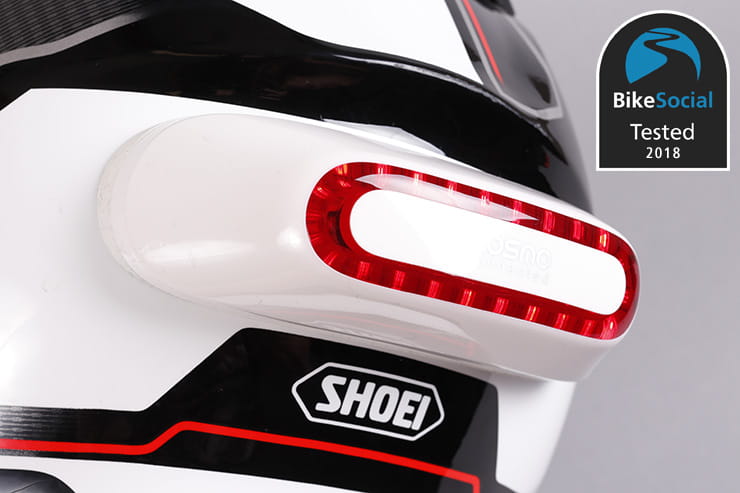 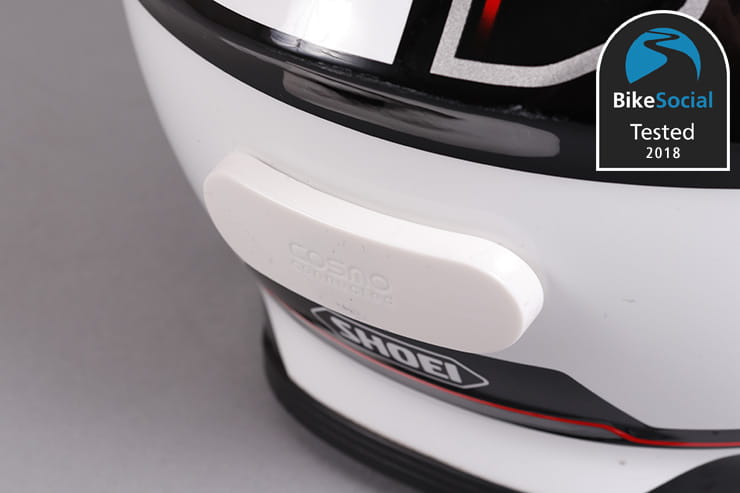 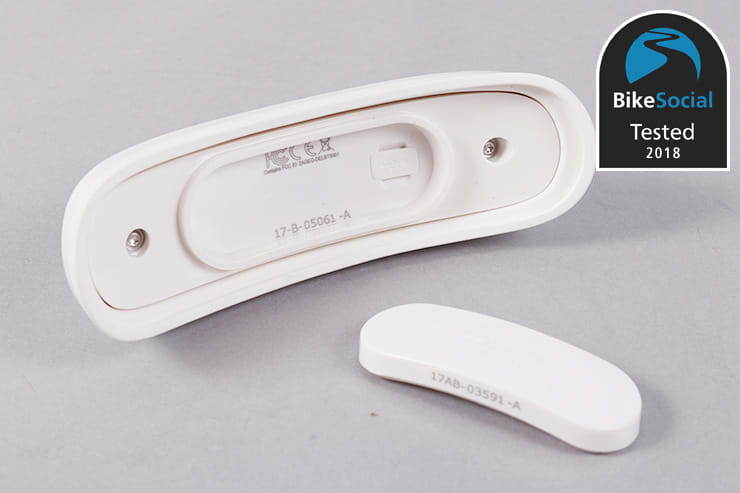 A self-adhesive magnetic pad makes fitting very simple, but allows the unit to break free in a crash

Using your smartphone (I’ve got it connected to an iPhone), you can turn on or off the constant light, and switch between the option for the brighter brake light to come on under deceleration, or to have the lamp flashing as a warning light.

In the app you can also check the charge level of the battery, see the distance covered over your current ride, your ride time and your current speed. A map can also be turned on, which shows your current location; this doesn’t record your route, and there are no options to download your journey. I did find that the distance travelled doesn’t always display correctly.

Three emergency contacts can be added from your address book, with the option to either send an SMS text message with your GPS coordinates, or to email them in the event of an accident.

The original premise of the Cosmo Connected, which started life as a Kickstarter campaign, was that the unit would connect with the new eCall service, and would see the emergency services dispatched to your location if you were involved in a crash. This would require an additional subscription, but it still hasn’t been implemented into Cosmo’s system, so the only option is notifying your own three contacts. If or when it does go live, the featured ability to add your personal details and blood type to the app will become more useful. 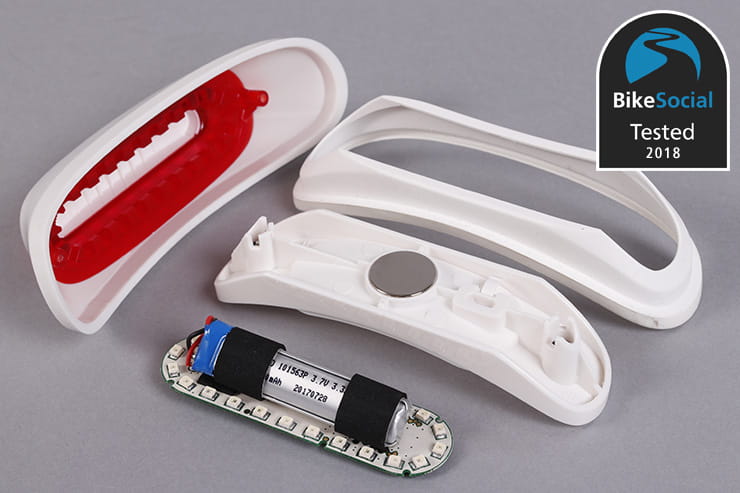 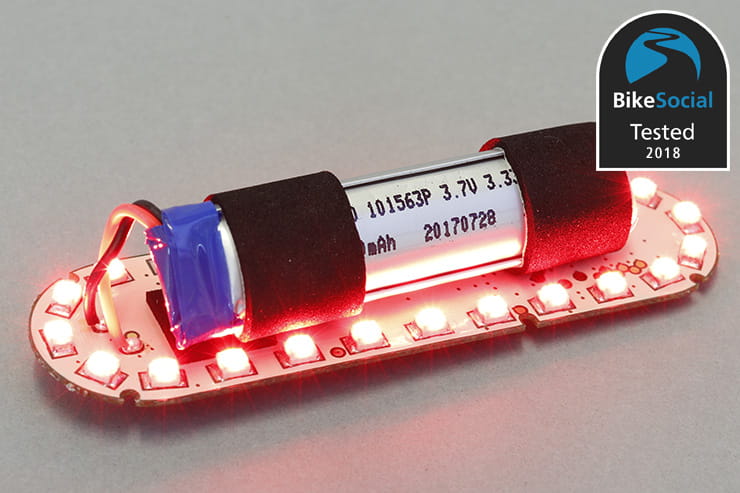 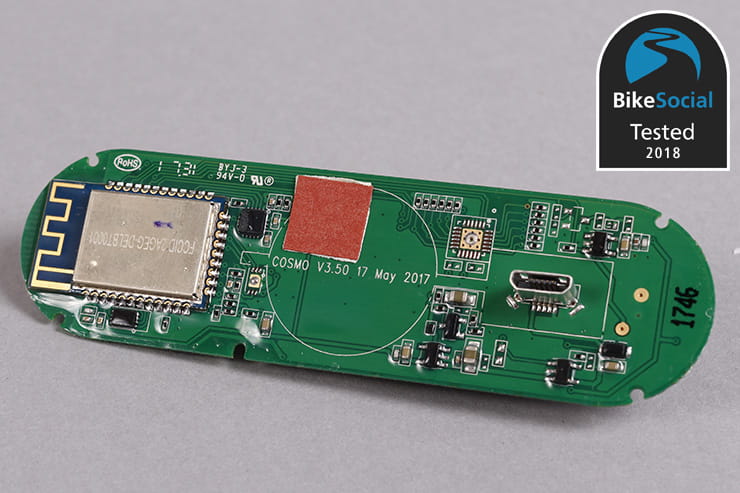 The Cosmo is a very well-made piece of kit

To turn on the Cosmo, just tap the side of it twice. As long as the app is running on your phone, it’ll automatically connect and will start monitoring your ride for any incidents. Switching it off just takes another double tap, but it’ll switch itself off when in brake light mode after 15minutes if it hasn’t moved. If you have it in warning light mode, it won’t turn itself off as quickly – useful if you’re using it to alert other road users of a break-down or incident.

If your app is shut down (by force quitting it, so not something that should happen even after a restart on the iPhone at least), the Cosmo won’t be able to communicate with your phone, so the emergency contacts won’t work.

The tech inside the Cosmo detects deceleration, so should go bright as you slow down without having to have any form of connection to the bike’s electrical system. In years gone by, this would probably have been fairly simple to do by picking up from the bike’s brake light, but the complexity of modern machines’ CanBUS looms is too prohibitive.

It’s a great idea in theory, but in practice the Cosmo spends a lot of time at its brightest. The team of engineers behind Cosmo went for a higher sensitivity to ensure the rider is as safe as possible, though in the video below you’ll see that head movements back and forth will trigger it, it’ll light up under a constant throttle, and even apparently under acceleration.

To test the emergency alert system, I put the Cosmo in a padded envelope (to avoid smashing in), then threw it out of the car window at 40mph, while monitoring the app. Almost instantly, a siren sounded on the phone, with a countdown displayed before my contacts would be automatically notified – you can cancel (or confirm) the alert within these two minutes.

Up to three contacts will receive a text or email telling them you’ve potentially been involved in an incident, along with a link to the location. Once the phone has taken on the alert process, it doesn’t matter if the Cosmo is destroyed in the accident – as long as your phone has a signal, it should work. 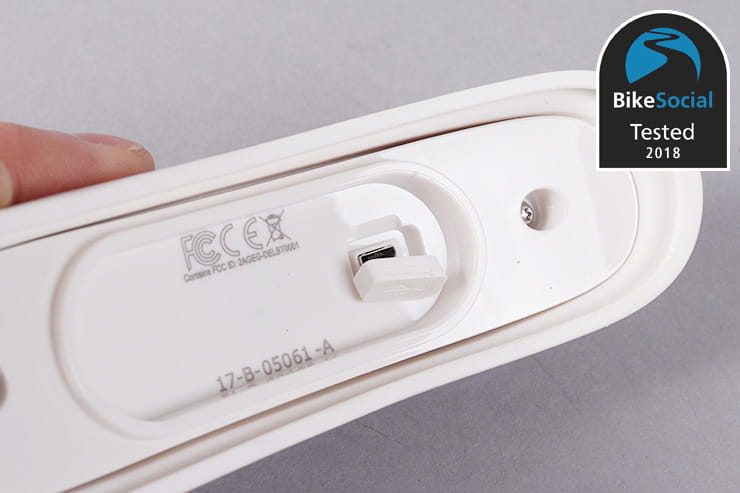 A micro USB port on the rear is used for charging

Charging via the rubber-covered micro-USB port on the rear is claimed to take just under three hours, though there’s no built-in indication of the charge status – you’ll need to check the app for that with the device turned on (it will power up while charging).

Battery life is claimed to be eight hours, but keep in mind that it will discharge – to a lesser degree – even when it’s switched off. In practice, depending how often you ride, you’ll need to charge it every two or three days to a week or so. In my testing, the device only managed approximately four hours of constant use from its 900mAh cell – beyond that, the light continued to work, but it became unresponsive when trying to turn it off.

It’s worth noting that the app doesn’t update the battery level until the device it turned on again; if you check it at the end of a connected ride, it’ll show what it was when the Cosmo was turned on at the start of the ride. I’ve seen it jump from 84% to 24% when turning off and on again after a long trip. 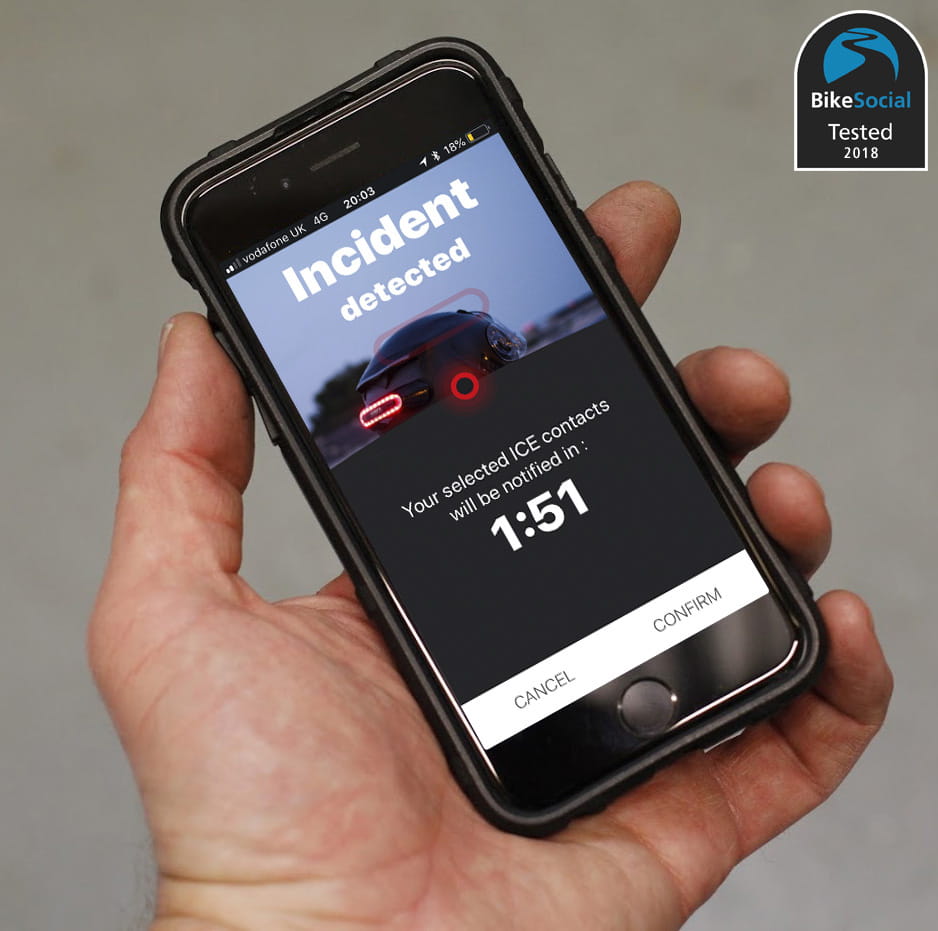 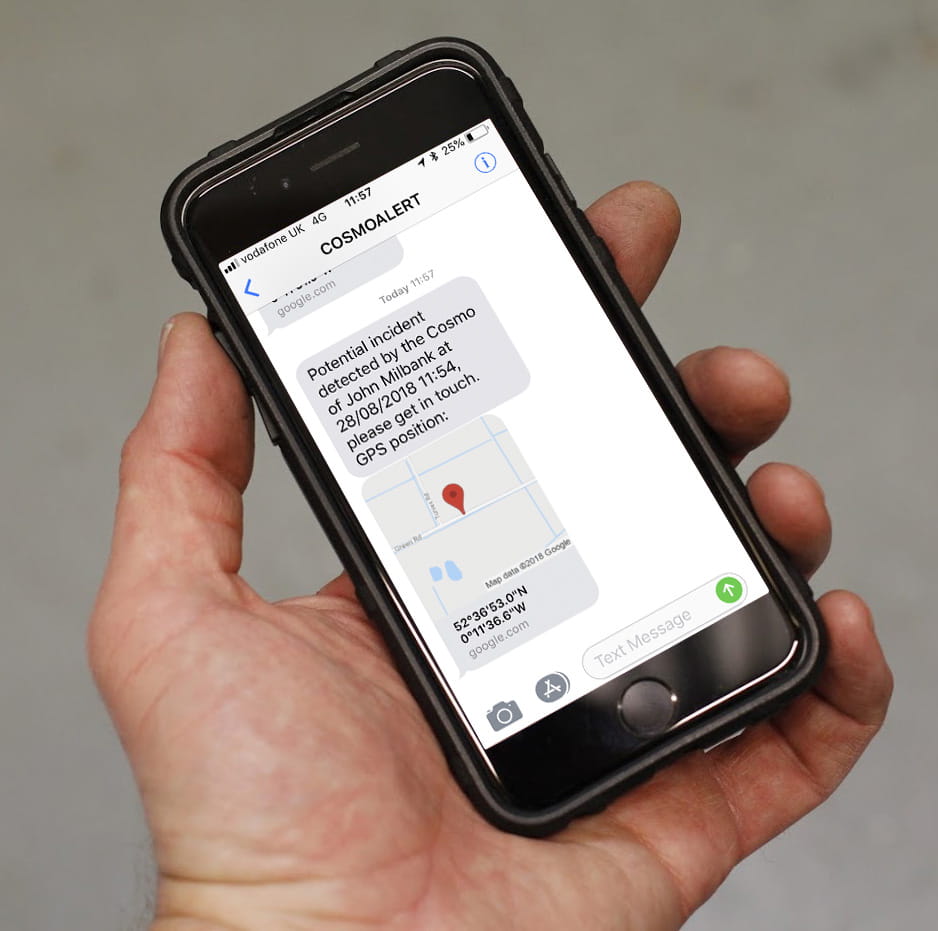 Incidents are alerted almost instantaneously, and the contacts you add will receive a text message or an email

Cosmo Connected is extremely well made, with a solid design and very clever fitting system. I hope that future firmware updates will see the device more accurately illuminating under braking, because while there’s no denying this will definitely make drivers more aware of you, and it is detecting deceleration, a car driver behind isn’t likely to see it as a brake light – to the untrained eye it looks more like a random flasher.

The emergency alert system works well – I hope Cosmo can integrate it with the eCall system and allow immediate emergency services response, though this will require an additional subscription. As it is, it’s a comforting backup to know that someone could raise the alarm for you, if things go horribly wrong.