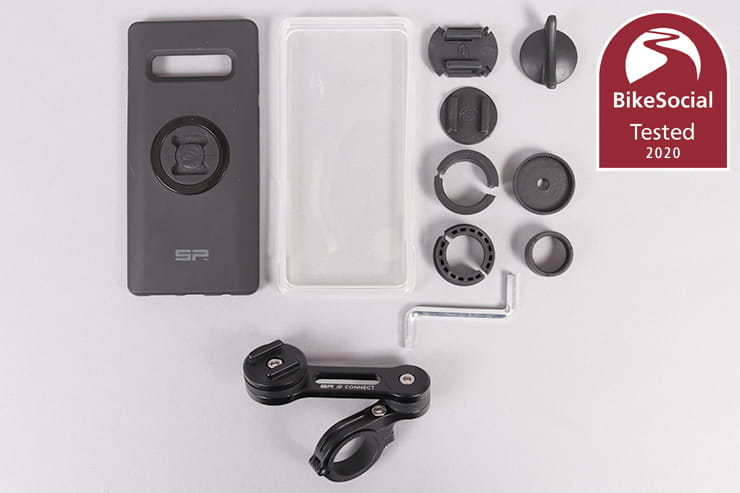 This is the Moto Bundle on review, to fit the Samsung Galaxy S10

The SP Connect phone mount system on review here uses a slimline clip design that’s compatible with a wide range of mounts, from handlebar clamps and stick-on fittings to Go-Pro compatible and suction. I’m testing the Moto Bundle for the Samsung Galaxy S10, which includes a phone case, weather cover and Moto Mount Pro. Before lockdown I used it on a Royal Enfield Interceptor, while during lockdown I had it fitted to my pushbike… 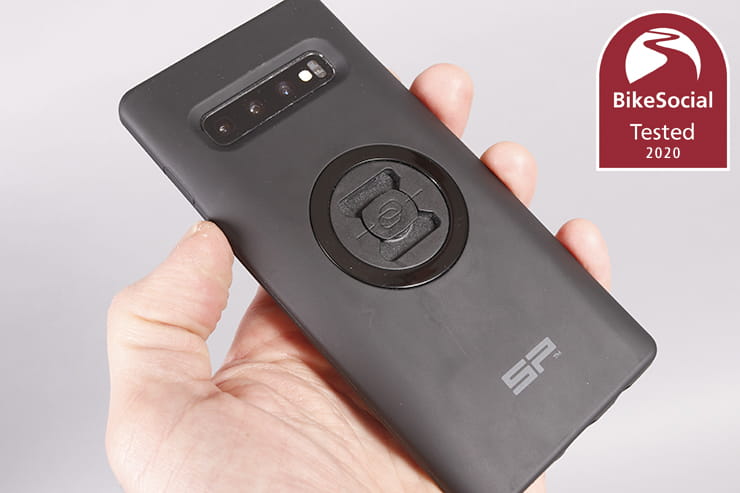 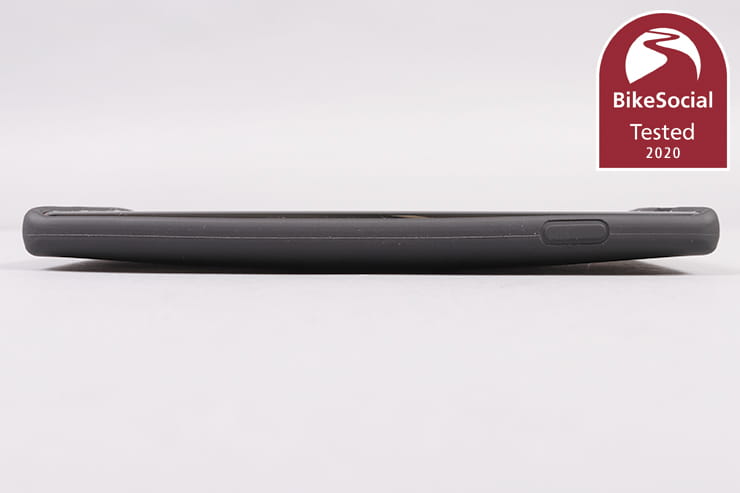 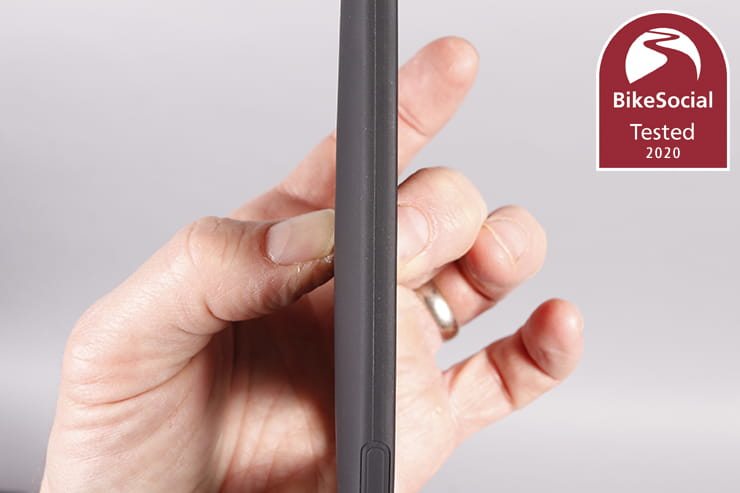 I replaced the £13.99 Spigen Tough Armour case I had fitted to my Samsung Galaxy S10 with this SP Connect version; protection is very good for such a slim design, with a decent thickness of rubbery plastic at the corners to protect from impact damage and a sight lip at the top and bottom to keep the screen off the ground if it falls onto a fairly flat surface (like any case, if the screen falls onto a stone, you’ve had it). The cameras on the back of the phone are also very well protected.

The phone’s buttons remain easy to use and there’s no interference to the speakers, charging port or the headphone socket (remember those?).

The case is also easy to grip, having a soft, tactile feel that still looks good after spending several months in my pocket alongside my keys. And despite the mounting system nestled in the rear, the phone can still be charged wirelessly. In fact, a wireless charging module is also available to keep your phone powered while on the bike. 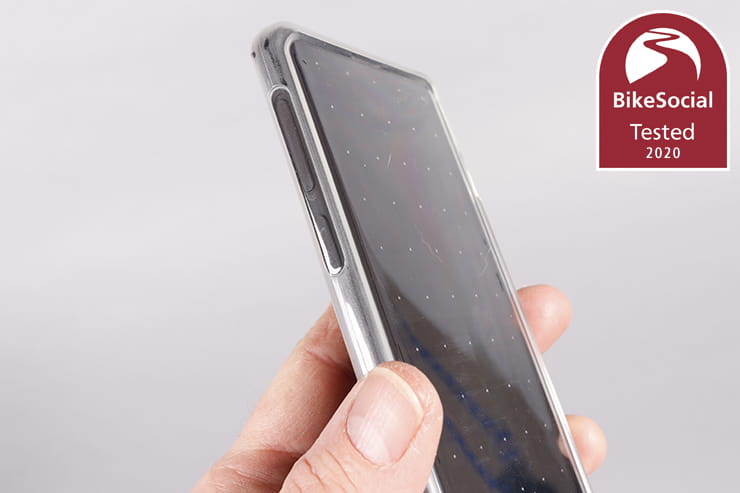 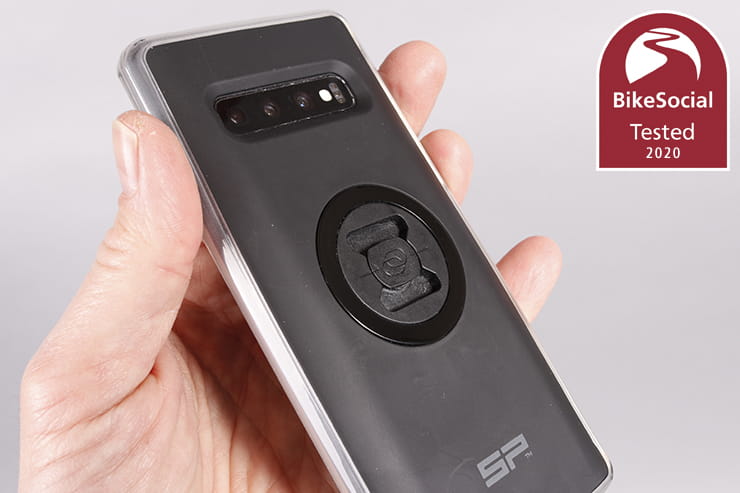 A weather-proof case is included with the Moto Bundle

The Galaxy S10 is water resistant, so I haven’t used the weather-proof cover that comes in the Moto Bundle. It does offer extra protection from the rain if your phone’s exposed at high speed, and it adds additional shock protection in case you drop it, but it makes for a bulkier phone with a less easy to read screen, as well as blocking the charging and headphone ports. You can still operate the screen of course, but it’s not something I’d want to leave on, and seeing as it’s a bit of a fiddle to fit and remove, I don’t tend to use it.

The mounting mechanism embedded into the back of the case takes up very little space and works by rotating through a really positive two-position latch. While this is a bit of a dust trap, I’ve not had any problems with anything fouling it and it’s easy to clean out if you need to.

A little stand is supplied with the case that you pop in the back and use to prop your phone up at one of two angles. It works fine, but I rarely think to carry it with me and it’s certainly not as elegant as the neat fold-out stand that was in my Spigen. What’s telling though is that, despite thinking I’d be pleased to switch back to the Spigen after reviewing these mounts, I’ve ended up keeping the SP Connect case fitted as it’s proved so useful. 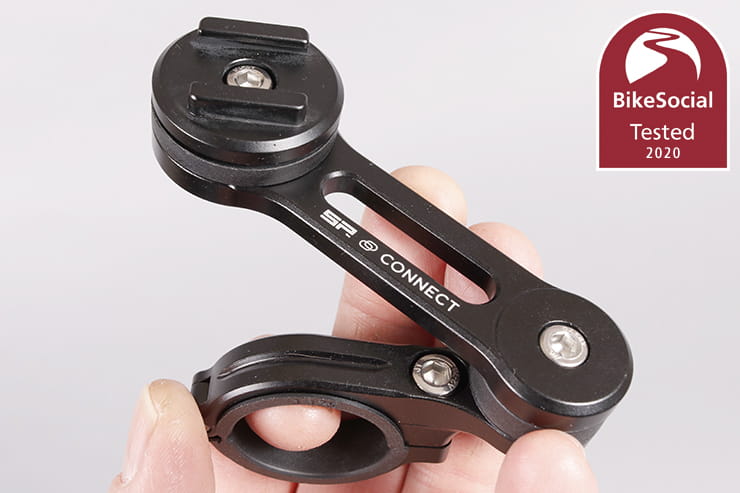 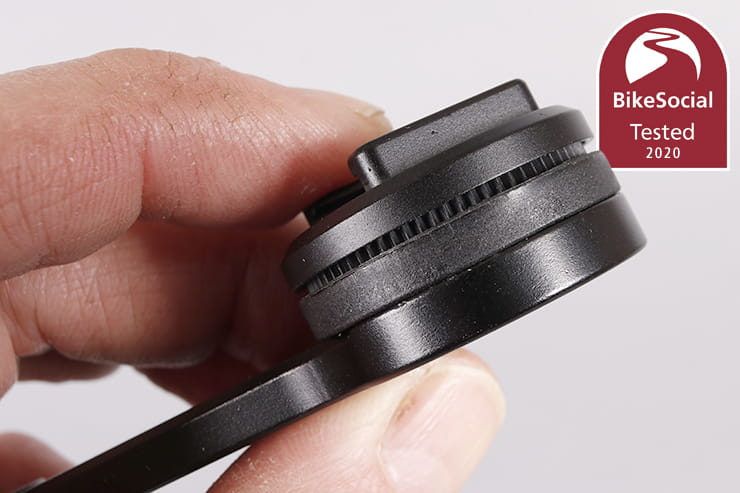 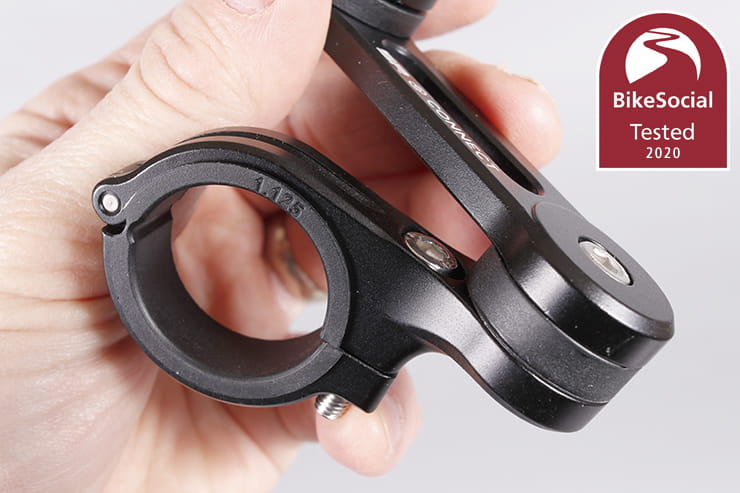 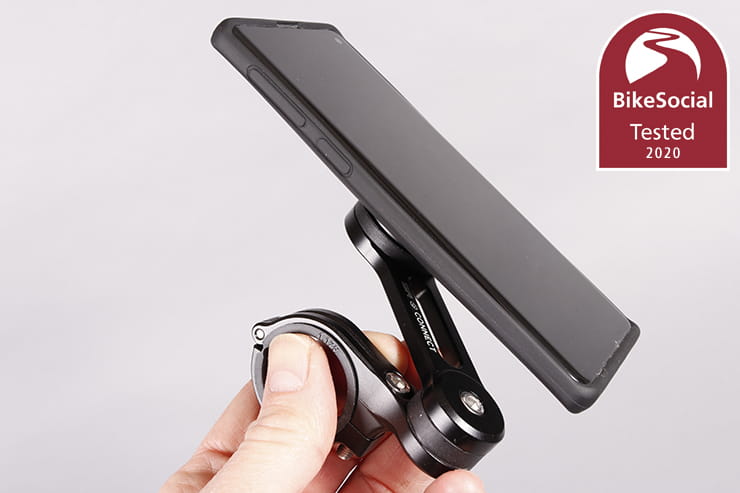 This is the Moto Mount Pro, which is part of the Moto Bundle

SP Connect mounting system: Is it safe and secure?

SP Connect mounts feature a pair of small rails that locate into the mechanism on the back of your phone case: rotate your device through ninety degrees and it’s locked in place. It really is simple, but it’s very secure.

The only way you’ll lose your phone out of the bracket is if you manage to knock it around and release it, but it is worth noting that, were you to be stopped at some traffic lights in a high-crime area for instance, a passer-by could very quickly snatch your phone away. It’d be great to see a variant on this design that has the option of a latching clasp, but it would take away the ease of use of the design. Quad Lock has a slight advantage here in that the collar/arm needs pressing to release the phone, though in either case a thief would most likely rip the device off if they were determined to take it; breaking the case or mount wouldn’t bother them. 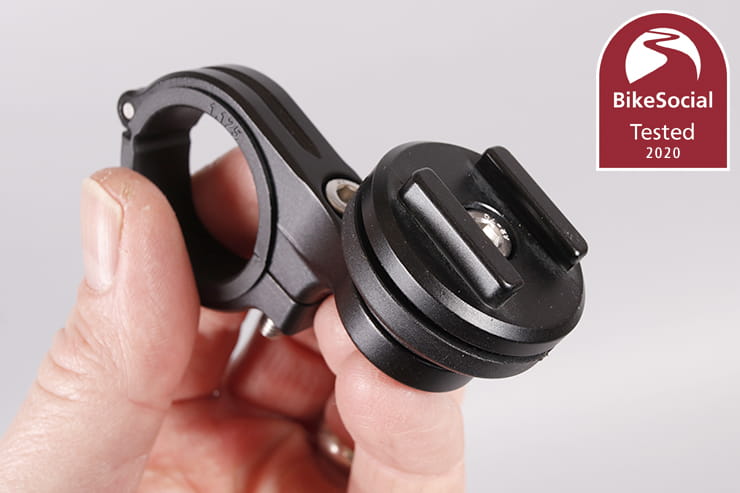 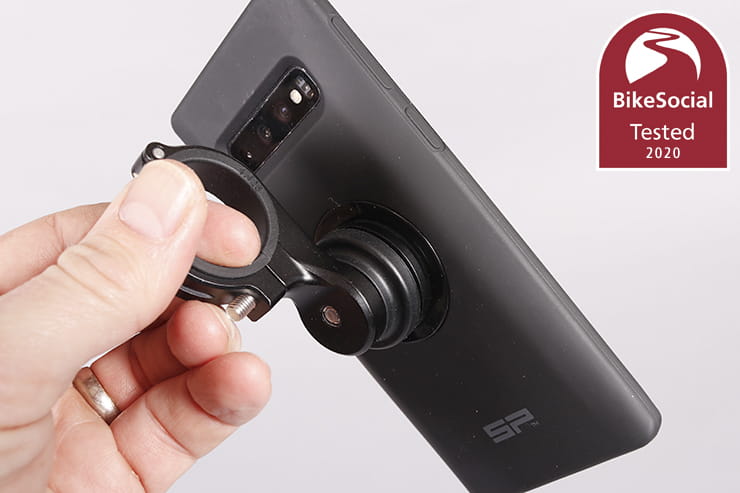 It’s striking just how many mounting options there are, and while not listed on the SP Connect website, this Moto Bundle did include a GoPro adaptor that clips into a standard GoPro mount, and a self-adhesive mount.

The beautifully-finished anodised aluminium Moto Mount Pro that forms the main part of this bundle (or is available separately for £59.95) is very versatile, coming with an arm that allows you to position the phone almost anywhere thanks to a clever toothed interface between each part of the mount, and the ability to rotate it anywhere on the bars. Spacers are included to suit different thickness handlebars, as well as a riser to set the phone a little higher if necessary. 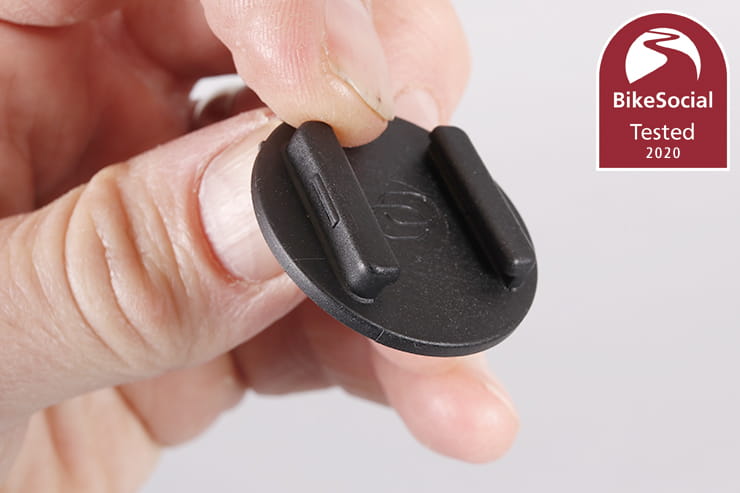 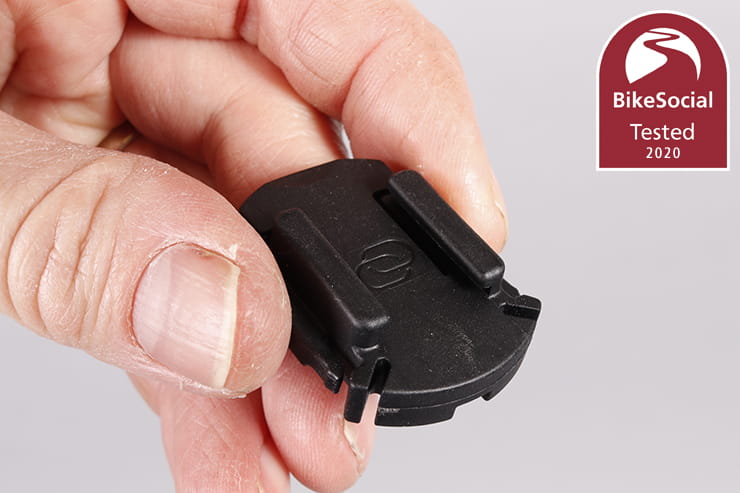 This bundle included a self-adhesive mount and a GoPro adaptor

On my push-bike, the arm allowed me to set the phone directly over the stem, while on the Royal Enfield I didn’t need the arm, so took it off and used it in a more compact form.

The instructions say that thread-lock should be used when fitting the clamp, though there’s none supplied, and it’s not been pre-applied to any of the set-screws. I haven’t had any issues with the kit loosening off, despite not using any of the various locking compounds I have in the garage, but it would be nice to see some pre-painted onto the screws in future.

The only limitation of the SP Connect that I can see is that you have to decide whether you want your phone in a vertical or horizontal orientation when you fit the mounting bracket. You can choose either (or any angle in between), but unlike the Quad Lock, you can’t switch it without tools. This isn’t an issue for me as I only use my phone one way, but it’s worth considering. 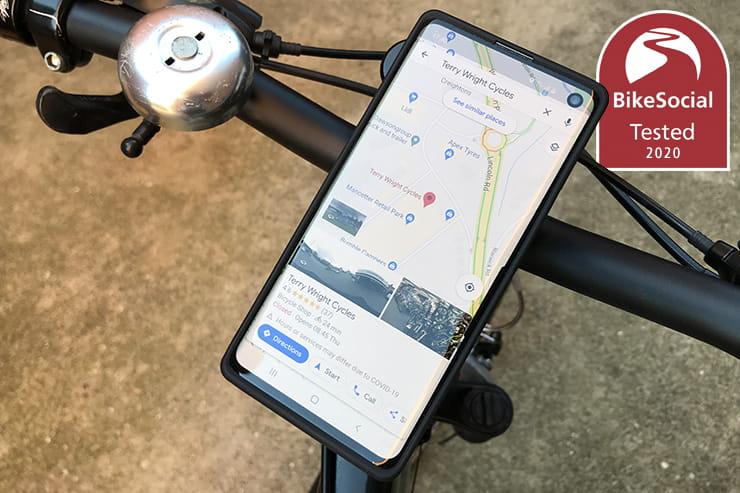 During lockdown I used the SP Connect kit on my bicycle

Will vibration damage my phone?

Thanks to the way the mount and mechanism clip together, and the soft plastic case, there’s a certain degree of vibration damping in the SP Connect system – your phone isn’t directly and firmly clamped to the bars.

While researching this review I looked for complaints of damage and couldn’t find any relating to SP Connect, though there was a thread that suggested someone had problems with the camera on their phone after using another brand of mount.

I had no issues with my S10 on a Kawasaki ZX-6R, BMW S1000XR and Royal Enfield Interceptor, but after two hours clamped to the very vibey Kawasaki W800, the telephoto lens on my phone shook badly during use when I’d got off to take a photo; this worried me as I was sure the optical image stabilisation (OIS) had been damaged.

Despite turning the phone off and on again and clearing the cache partition, it still seemed to shake. However, the phone rattled as expected with the camera off, then stopped rattling with it on, so it seemed to be engaging. After about four hours, I tried the camera again and the vibration had disappeared.

My mate – who rides an Aprilia RSV1000R – hasn’t suffered any problems and there are plenty of testimonials online of people who’ve been using SP Connect for more than a year and are extremely happy with it.

I’m happy to continue to use it on my own bikes, though I’ll be more cautious on extremely vibey machines like the W800. 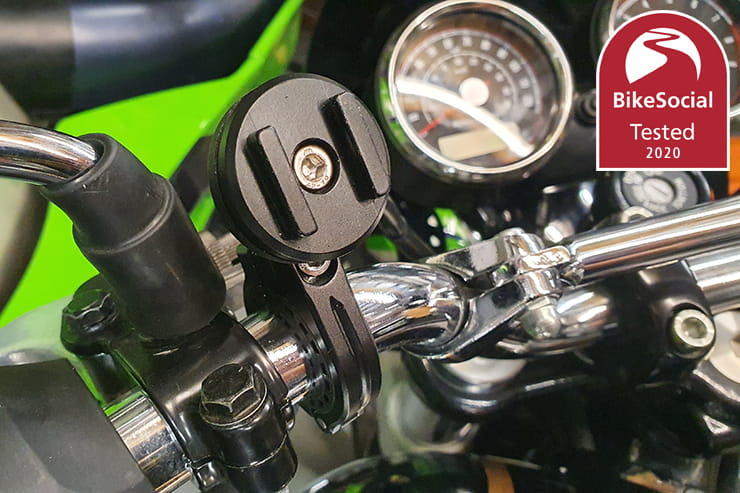 I’m usually reluctant to use mounts that are phone-specific as when you change your device you have to buy the mount again. However, we all buy cases, and £24.95 isn’t bad for a quality one like this, especially with the very effective mounting system incorporated (Samsung’s own standard case is £25); I don’t mind paying that every two or three years.

Of course, you’ll have to keep buying the most popular phones if you want to use an SP Connect case (there’s no support for the Google Pixel for instance), but you can get round that with the stick-on universal interface.

What impresses me most is the range of mounts available and the real simplicity in use; I’m definitely going to want to use the suction mount in my car and will probably invest in one or two other mounts so I don’t need to keep swapping this one between my push-bike and motorcycles.

If you want to fit your phone to your motorcycle (or push-bike, or car windscreen, or belt, or arm or, well, anywhere…) I’ve no hesitation in recommending the SP Connect system. 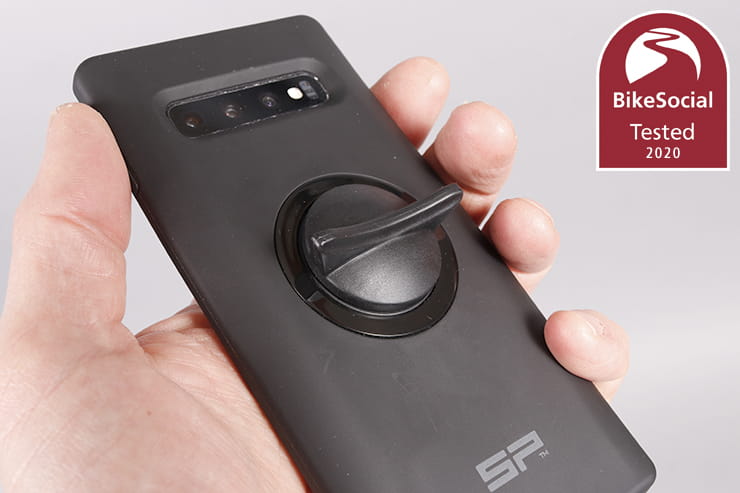 A stand is supplied with the phone case and can be positioned like this, or at 90°

SP Connect will of course be constantly adding new phone cases, but there are also two water-resistant universal cases available (£24.95), as well as a stick-on mechanism to convert your existing case (£17.95).

As of May 2020, the current list of phones that dedicated cases are available for from SP Connect are: