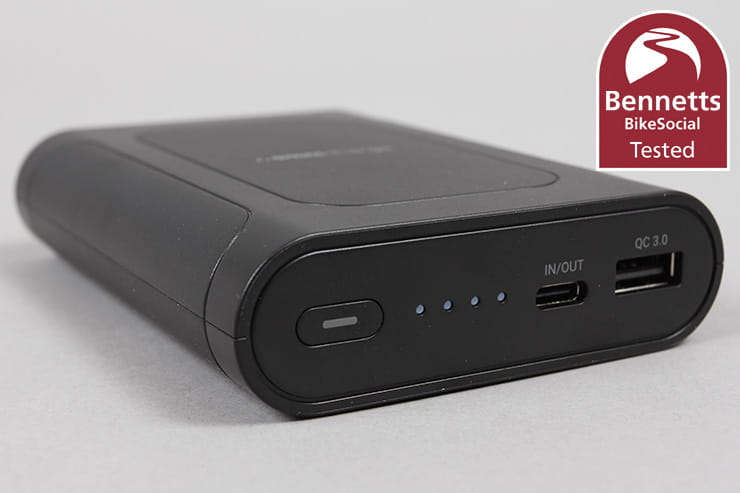 There’s a massive choice when it comes to what are now considered small to medium-sized power banks, so at £79.99 from Amazon (not an affiliated link) in the UK, why is this one so much more expensive?

I’ve been using it for the past two months, cycling it constantly with a variety of devices to find out how it performs…

The Mobile is turned on via a press switch on the front, next to the four capacity LEDs; it won’t turn itself on automatically when a device is connected, but it does turn itself off when the device stops pulling power.

You can read the full instructions for the Omnincharge Omni Mobile here.

The USB-A port on the front of the Omnicharge Mobile is QC 3.0 compatible, which is a fast-charging standard by Qualcomm. While this outlet will charge any standard USB device at 5 V, if a QC-equipped device is connected, it can be charged much more quickly.

QC 3.0 is the latest version, but it is backwards compatible with older devices:

In QC 1.0, that 10 W output meant that the maximum charge was 5 V at 2 A, because P=VA (Power in Watts equals Volts times current in Amps). Newer devices – particularly smartphones – can be charged faster with higher voltages, so while 5 V at 18 W could put out a current of up to 3.6 A, charging a phone at 9 V can be a lot quicker, and that 18 W would still mean 2 A could be delivered.

QC 3.0 allows even higher voltages to be used (though at reduced current due to the same 18W output), which some devices can take advantage of. This standard also includes Intelligent Negotiation for Optimum Voltage (INOV), which adapts the output voltage to suit the needs of the battery being charged – right through its cycle – and is claimed to be even more efficient.

Of course, nothing’s ever easy, and even using inline meters to test the current being delivered, there are too many variables for me to be able to say exactly how much charge the Omni Mobile could give YOUR kit, so my testing involved charging a Samsung Galaxy S10, a GoPro Hero 5 and Hero 7 (both use the same 3.85/1,220 mAh cells) and an iPad Air 2.

One of the standout features of the Omnicharge Mobile 12800 is that it has a high-output USB-C port, delivering up to 60 W. That means that, unlike the majority of cheaper power banks, it can charge a compatible laptop. How far it’ll go will depend on the size of the battery in your laptop, as well as how power-hungry it is if it’s being used at the time. As soon as I get access to a USB-C chargeable laptop, I’ll update this review with its performance, though based on my experience of using the Omni 20+ and Ultimate, I’d estimate that this will deliver about a 50% charge to a sleeping MacBook Pro. 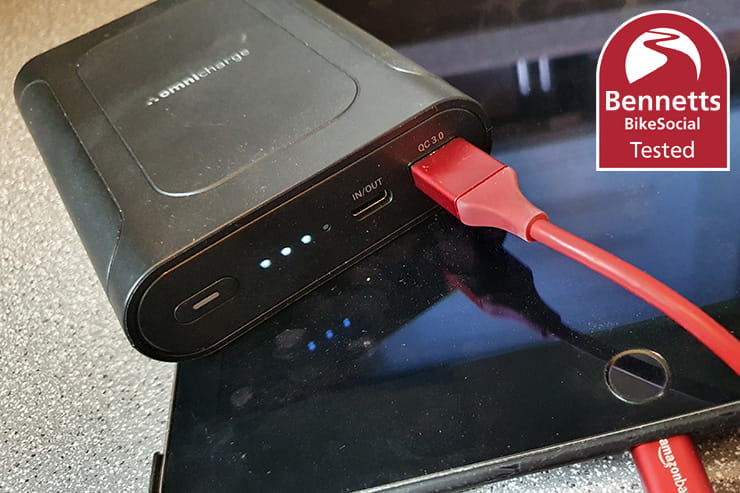 Omnicharge claims up to two charges of a tablet, but of course they are available with a range of battery capacities. The Omni Mobile charged my iPad Air 2 back to full once, then with the iPad flattened again it added 8% more before being fully discharged. 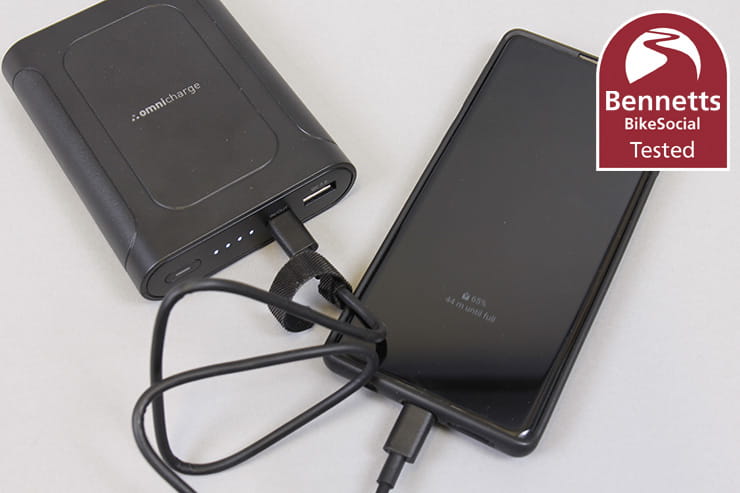 My Samsung Galaxy S10 takes advantage of the fast-charge capability of the USB-A port, and charges in about 1hr 30mins from the Omni Mobile. In my testing, I managed to fill the phone from dead four times, with a very healthy final charge before the Mobile was empty. 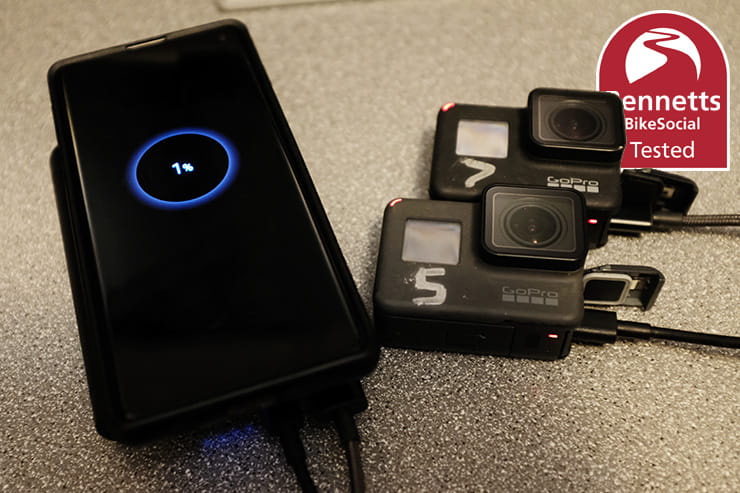 Wireless charging works well and it’s pretty easy to find the sweet spot, given the small form of the Omni Mobile. It’s fast-charge compatible, but it’s of course not as efficient as using a cable – in my tests I managed just under two full charges through wireless.

You can use wireless charging at the same time as the USB-C and USB-A ports, so up to three devices can be juiced at once.

My GoPros provided the best comparison of the Omnicharge devices, and by running them flat with 4K recording then charging them again (after letting them cool), I managed six full charges and another half. The Omni 20+ has 150% of the capacity of the Mobile and managed almost eight and a half full charges of the GoPros, which indicates that although the Mobile is a lower capacity device, it appears to be a little more efficient in its delivery than the 20+, and indeed the Ultimate.

Build quality – what cells are inside?

The Omnicharge devices use 18650 cells (similar to big, fat lithium AA cells). Just like those in Tesla car batteries, these cylindrical cells might not appear to be making as efficient use of space as the pouch cells found in many cheaper power banks, but they’re less prone to swelling and hence potentially safer. They’re also cheaper to produce. 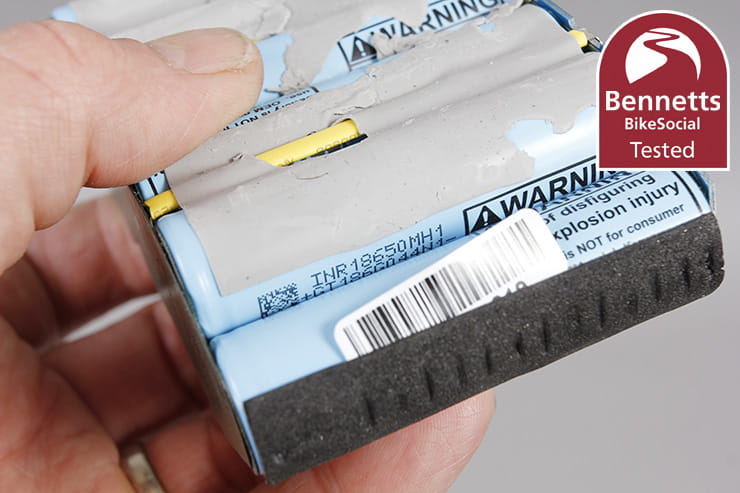 Early in production Omnicharge used BAK-branded cells, which caused some arguments on forums, but when I asked the company if they’re what’s still in there I was told that Omnicharge is “very keen on listening to customer feedback, and given the sentiment around the BAK cells, promptly made the switch to LG cells. All of the current product line has been using those cells for some time now.”

While I couldn’t get the Omni Mobile open to check, I hacked open up my Ultimate and inside were 12 LG INR18650MH1 cells, which are each rated as 3,200 mAh at 3.7 V. Given the performance of the Mobile, I’ve no reason to doubt that these are any different, and as the devices were fulfilled by Amazon, there was also no question of these being ‘review specials’.

Using the 18650 cells makes sense in all the Omnicharge devices I’ve used, but their rugged design is all the more reassuring in something that will probably spend a lot of time in your pocket. Hard plastic outer shells will of course help protect even the more vulnerable pouch-style cells used in many cheaper devices, but there’ll be no worrying swelling from this over time.

In the last two months I’ve had the Omnicharge cycling numerous times but it’s of course too early to comment on long-term durability. However, I will update this review if anything changes.

Dr Tom explained that while they’re much more efficient than the old nickel metal hydride (NiMh) technology, lithium ion cells still aren’t 100% efficient, and battery capacity can be claimed in various ways. This could include calculations from first principles (not testing) that may assume the calculation stopping at a lower voltage than a device’s cut-offs, which are used to prevent serious damage to the cells during discharge.

The capacity I as a user can measure will vary a lot depending on the current being drawn, temperature, duty cycles and other variables. Plus, a typical use scenario is not a constant load, which would be required to properly test a battery.

The group of cells that make up the Omnicharge battery go through circuits that regulate the voltage to what’s required by the device being charged – if it’s through USB that means that the four 3.7 V cells that total 14.8 V in this Omni Mobile are being stepped down to 5 V to output to the GoPro. The GoPro itself is then taking that 5 V and running it through its own charge circuit in order to juice up the 3.7 V cell inside. That’s a lot of opportunities for inefficiency

The results I got from this Omnicharge were in line with other power banks I’ve used, so if all you want is a basic charging brick, this is probably over-kill, but what you’re paying for is the high power delivery, extra features, the build quality and potential longevity, plus the durability of the good-quality cells inside. 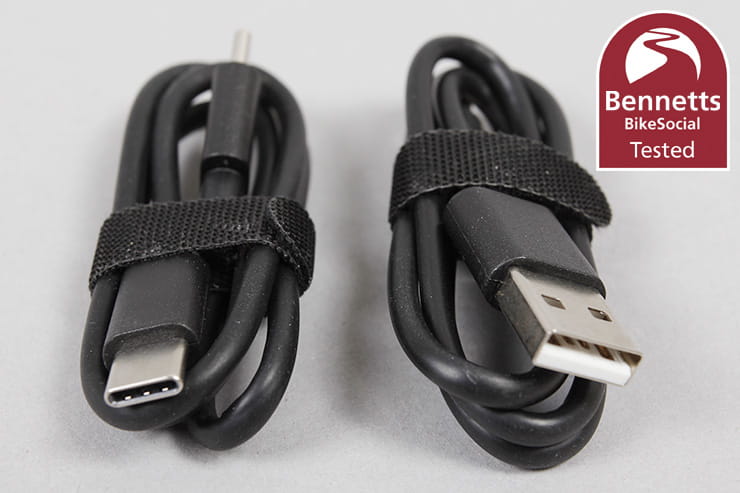 Two cables are supplied, but you don’t get a mains charger

There’s no charger supplied with the Onmnicharge Mobile 12800, but any USB power supply can charge it via the USB-C port. This port can deliver 60 W, but it can ‘only’ accept up to 30 W; that still gives the opportunity for a pretty swift top-up of a couple of hours or so. I use this £9 18W Xtar QC3.0 wall adaptor, but Omnicharge does offer its own 45W and QC 3.0 charger with USB-C and USB-A outlets for £39.99, which is able to take full advantage of that faster charge capacity. 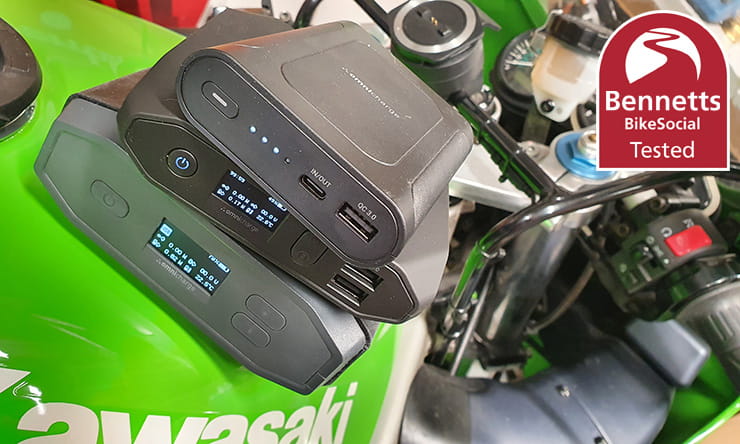 Which Omnicharge device should I choose?

I’ve also tested the Omnicharge Omni 20+ and the Omni Ultimate, which are larger capacity devices with extra features including a 230 V AC outlet.

While the Omni Mobile can top up a laptop with USB-C charging capability, the 20+ and Ultimate also have variable DC outputs that can be used to directly charge the majority of laptops with optional cables (as well as mains power outlets).

If laptop charging is important to you, and you can afford it, I’d recommend the 20+ most highly of the three thanks to it not being over bulky, yet having a relatively high capacity and the ability to charge a very wide range of devices. 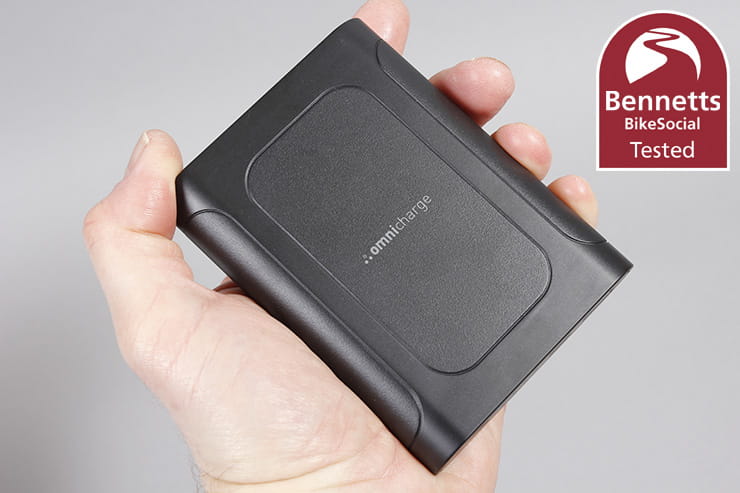 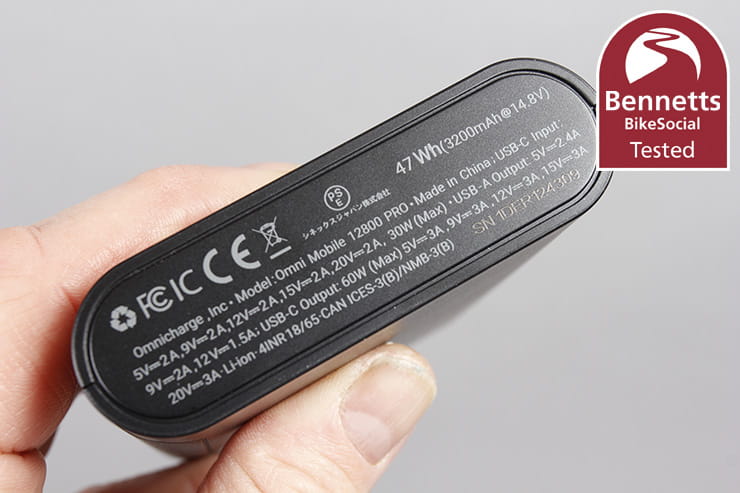 There’s no denying that there are cheaper options out there, even with some of the features of the Omnicharge Omni Mobile 12800. But by combining wireless charging, QC 3.0 output from the USB-A port, and 60 W from the USB-C, this is a surprisingly punchy little device.

If all you want is a cheap power bank to keep your phone topped up, this probably isn’t the device for you, but having seen the build quality inside the Omni Ultimate, it’s clear that this is a premium device.

For many people, knowing that a high-capacity lithium battery – which they’ll likely keep in their pocket – has top-quality cells inside a well-designed, premium case will be worth paying extra for.