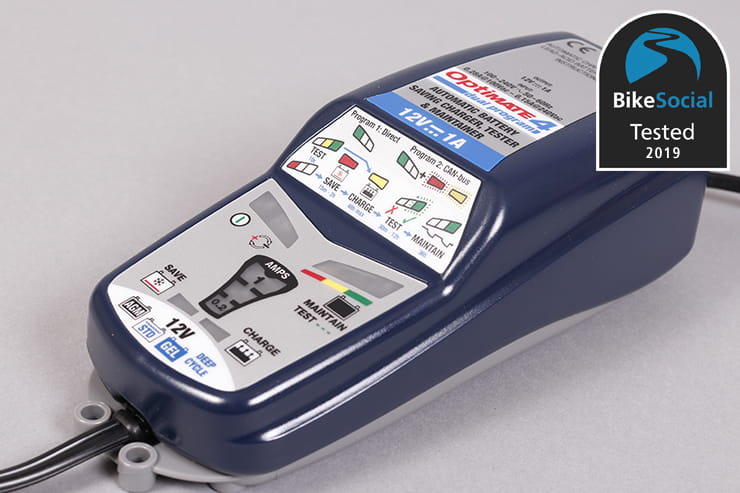 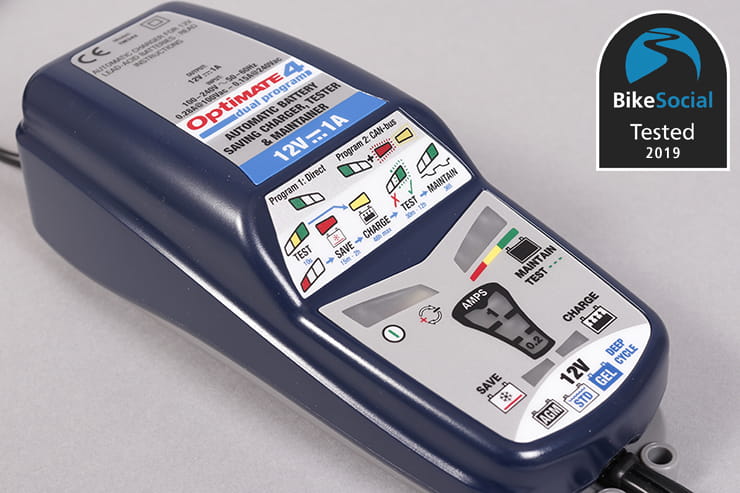 Chris Read-Jones is a Bennetts Rewards member, and has been testing the Optimate 4 dual-programme motorcycle charger for us...

Imagine the scene: It’s a Saturday, the sun is shining and it’s unusually warm. The husband/wife/kids are out and you’ve got a couple of hours spare. What would you do?

In my case, after getting my kit on and wheeling the bike out, I was met with utter disappointment. In the relatively short period of time I’d not ridden my VFR800, the battery had gone completely flat; it wouldn’t even turn over.

Having since used the Optimate 4 Dual Programme motorcycle battery charger reviewed here, that nightmare scenario is a thing of the past… 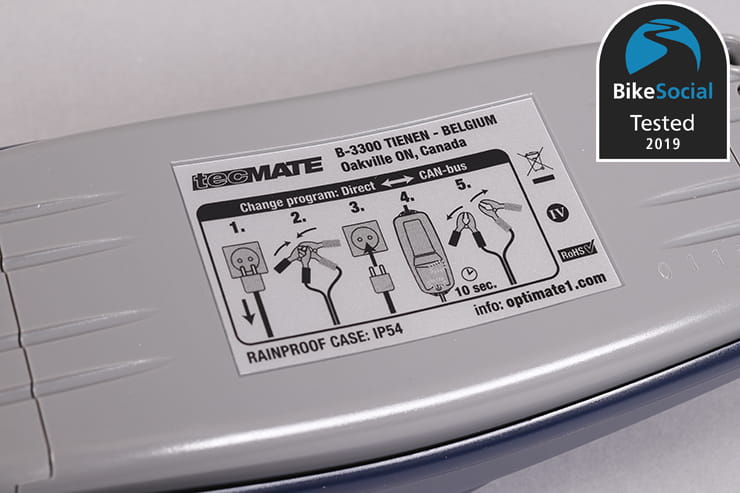 The Optimate 4 is a very well designed, compact unit that’s really easy to use. While other models are available to suit lithium cells, the Optimate 4 is meant for 12V lead acid, AGM, VRLA and Gel batteries.

The device doesn’t have any buttons at all, with everything done automatically. I really like the simplicity and peace of mind this gives me – the lack of switches eradicates any chances of getting settings wrong.

This model has the ability to revive some dead batteries, as well as maintain healthy ones.  First, it performs a test to check the condition of the battery, as well as make sure everything’s connected correctly. If it’s sulphated or severely discharged, the recovery mode uses 16V or up to 22V, before a low-voltage pulse puts the pack into a chargeable state.

Once the battery is ready to be charged, 1A is delivered until it reaches 14.3V, before a pulsed current gets the cells to full charge.

The Optimate then checks the battery with a series of tests for half an hour – ensuring a charge can be held – before charging at 13.6V for 30mins. After that, it’s a constant test/charge cycle that can be left on as long as you need.

Complex stuff, but all you need to know is that you plug it in, then forget about it. There are three banks of lights on the unit’s display panel to keep you informed as to what the charger is doing in terms of cycle, what the health of your battery is and what current the unit is deploying to the battery.

Being rated to IP54, the Optimate 4 is protected against limited dust ingress and water splashes, but isn’t waterproof; don’t leave it out in the rain, but off the ground under a cover is fine. 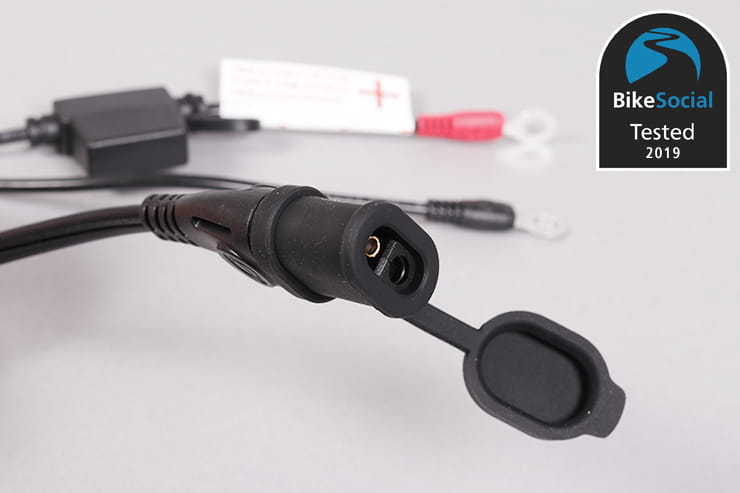 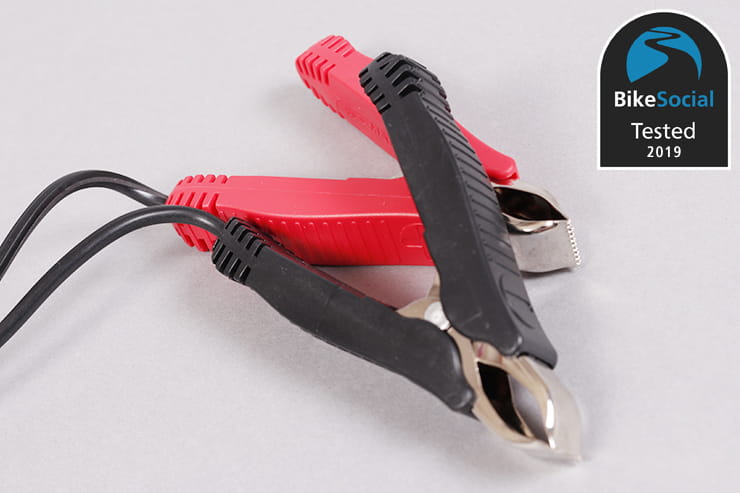 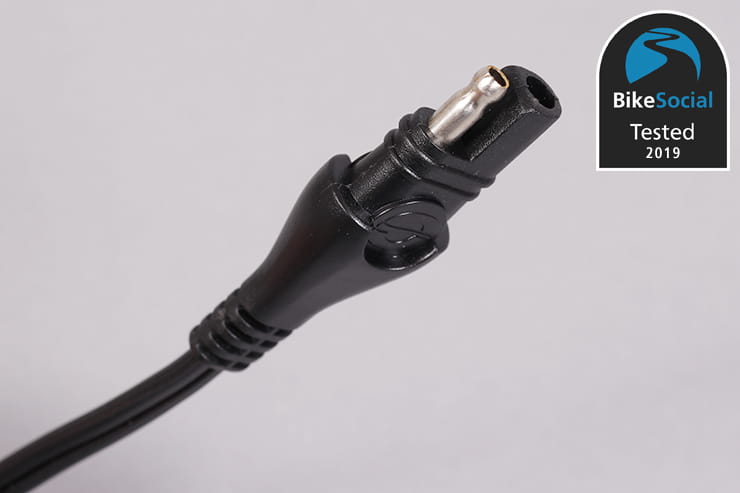 A fly-lead can be left connected to your bike’s battery, and comes with a weather resistant cap, while crocodile clips connections are also supplied

The theme of simplicity is continued with the connections for the charger – the included leads provide you with two options: The first is a hard-wired fly lead intended to be connected to the bike permanently, and enables the battery to be charged/maintained when necessary. This lead features clearly marked red and black ring connectors at the battery end, and a fool-proof and weather-sealed SAE connecter at the charger end. Different shaped connecters ensure that you can’t plug it in the wrong way around.

Installation was very simple – I’ve got the SAE connector neatly tucked up behind the seat, and can pull it down whenever I need to connect it. This is a really good solution if you want to leave the battery in the bike and have access to a mains socket nearby (there’s a very healthy 2m of mains cable and another 2m of charging cable attached).

The second connection option comes in the form of crocodile clips on one end, and an SAE connector on the other. Great should you want to charge a battery out of the bike. The crocodile clips fit securely and snugly around my battery terminals.

This model is suitable for charging lead-acid, AGM, STD and Gel batteries, rated between 2 and 50 amp hours, which makes it a really handy and versatile bit of kit to have around. Although no use to me on my older 6V Honda, the unit does have the capability to charge via the 12V port on CAN-bus equipped BMW motorcycles (using an optional DIN plug lead), making the charger an even more convenient option. 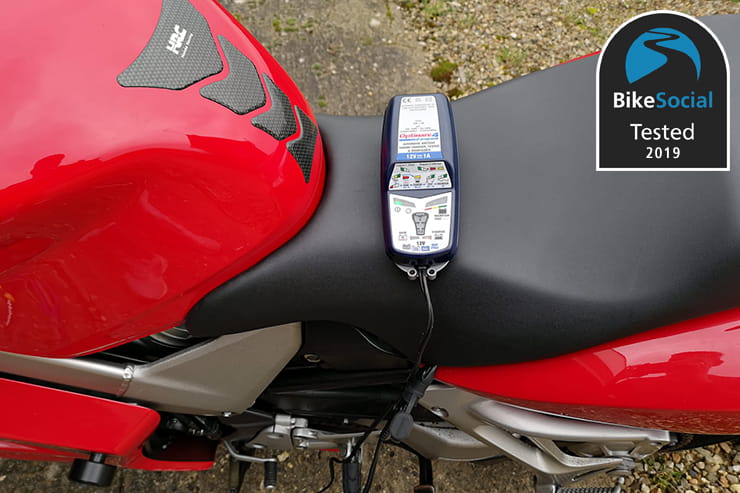 The relatively beefy output current of 1A meant that my flat motorcycle battery was fully charged and maintaining in just under 9 hours. I recently found the campervan battery to be dead and, although being 55Ah, I thought I’d give it a go; it took longer, at around 35 hours, but sure enough it managed to complete the cycle and the battery has been fine since. The Optimate is rated for long-term maintenance of batteries up to 75Ah.

During the charging of both batteries, the unit seemed to stay relatively cool compared to previous chargers I’ve used; it didn’t once get anything more than warm on any part of the unit.

What was previously an arduous and sometimes nerve-wracking experience has been turned into a simple process that’s quick, safe and convenient. The leads supplied will cover – at least for me – all eventualities, and the rescue function has been great on both of the batteries I’ve charged.

All of the information I needed for charging was printed on the box the charger comes in, and there’s a comprehensive instruction booklet, but I love the fact that the process is fully automatic, and there are no switches to worry about.

I’m not sure how much easier charging a battery could be!