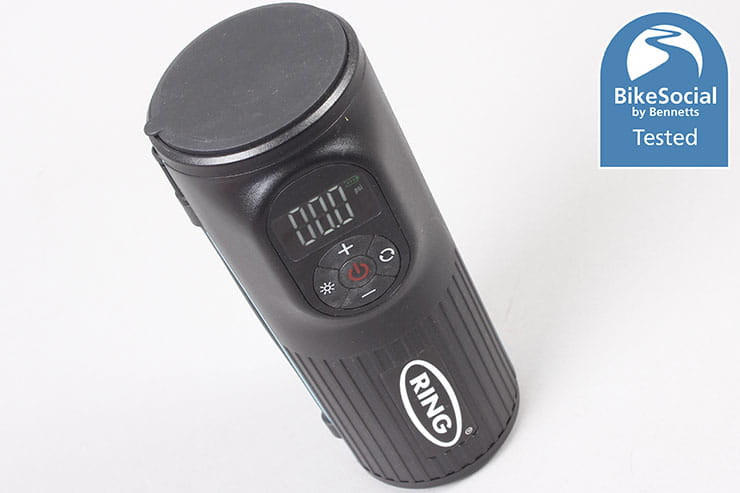 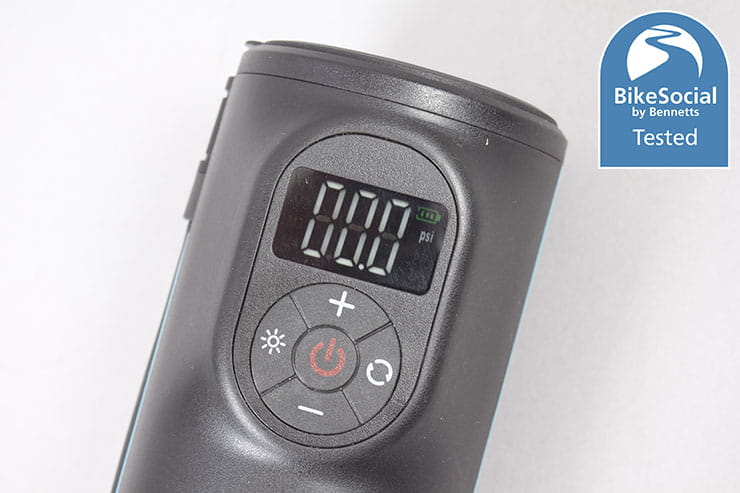 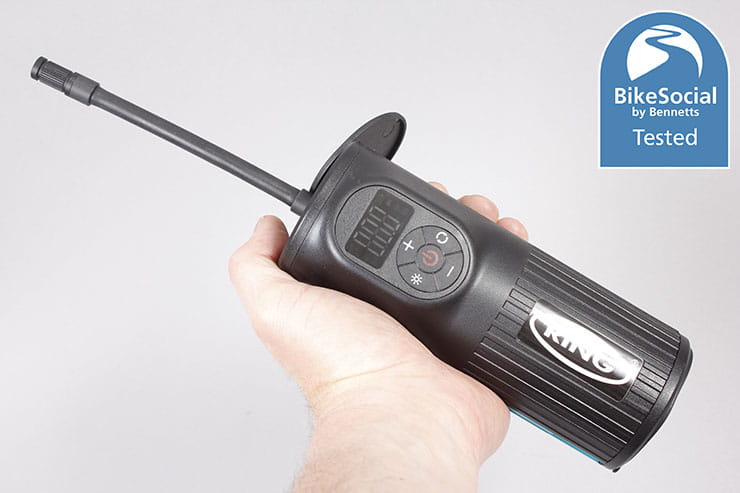 With a built-in lithium battery, the Ring RTC2000 Handheld Tyre Inflator has the potential to make life easier when checking your tyres, be very useful for track riders who’ve let some air out for the circuit then want to get safely home, or for emergencies when combined with a puncture repair kit. I’ve been testing it on a variety of tyres to find out if it’s worth the money… 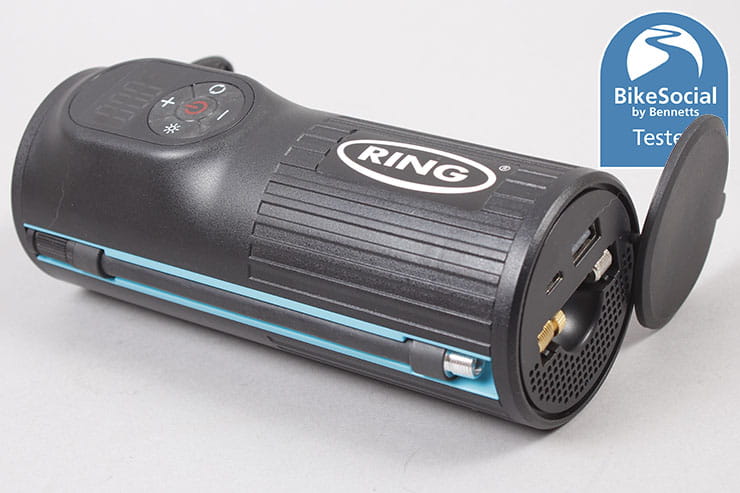 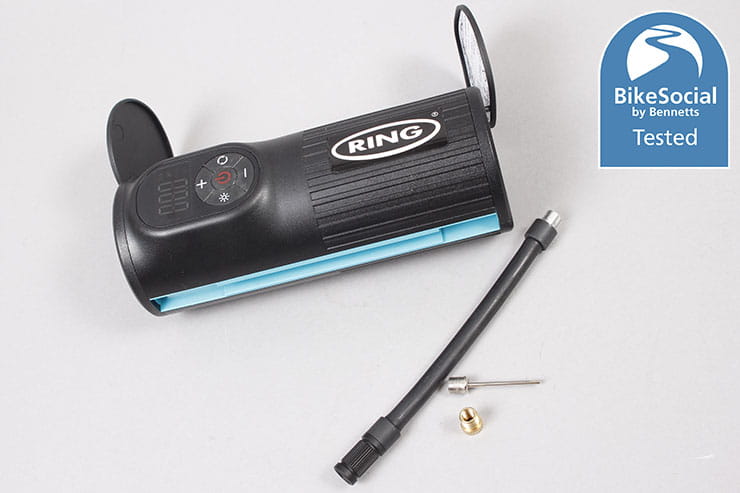 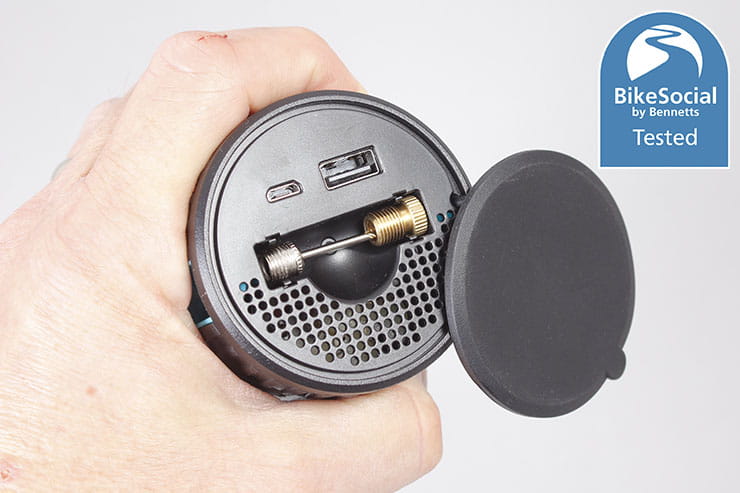 Weighing just 486g and measuring 17cm long and 6.8cm at its widest point, the Ring Handheld Tyre Inflator is easy to carry in a rucksack, pop in luggage or even tuck under some seats.

For bicycle use it comes with a carrier (and two bolts) that looks very much like a bottle cage though is a little smaller – this will rattle around a bit in a standard cage. There’s also a draw-string carry-bag, which helps protect it while it’s bouncing around inside your motorcycle’s top-box. 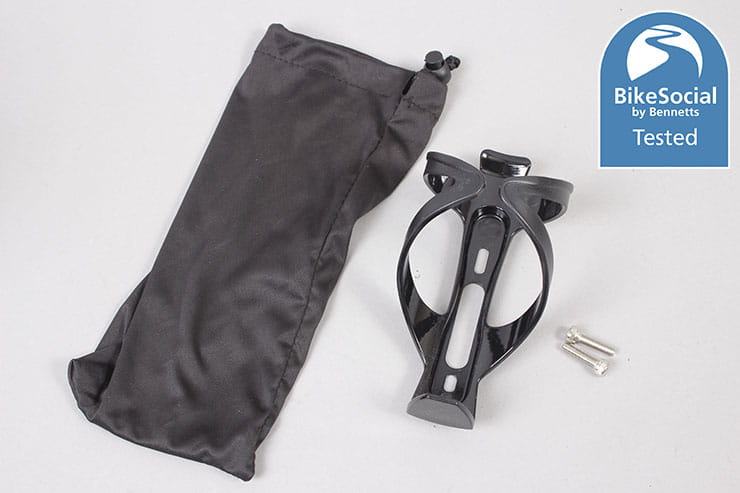 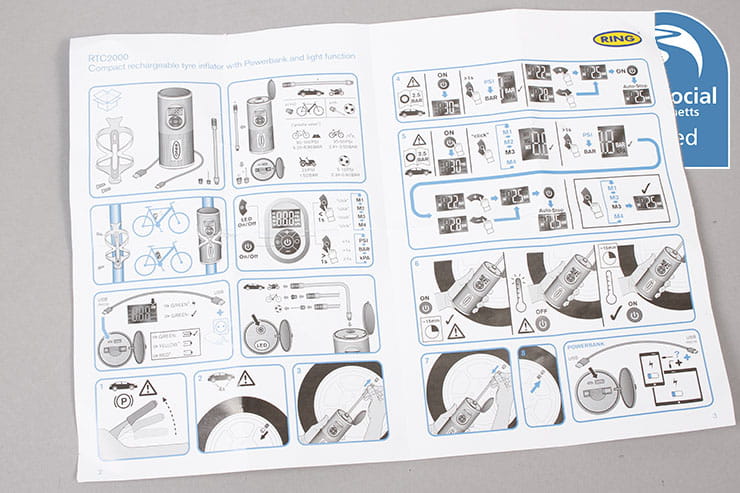 The carrier is only really useful for bicycles, while the instructions are fine, if not that easy to follow

The catchily-named RTC2000 has a pair of what appear to be 3.7V 18650 cells inside, which going by the spec-sheet are each rated to 2,600mAh. I wasn’t able to get to them when I took it apart to check, but that’s a very achievable specification. These power a small motor, which in turn drives a pump to provide the pressure.

A 15cm hose is tucked neatly into the side of the unit with a Schrader valve end that’s what you need for motorcycles, cars and typically mountain bikes. Unless the valve is on the bottom of the tyre, the unit will dangle but as it’s so light this won’t cause any harm.

In the bottom, under a flap, is an adaptor for the Presta valves seen on racing bicycles, and a needle for inflating footballs; I’d have liked to have seen these gripped a little tighter as they have the potential to drop out when the flap’s open for charging. 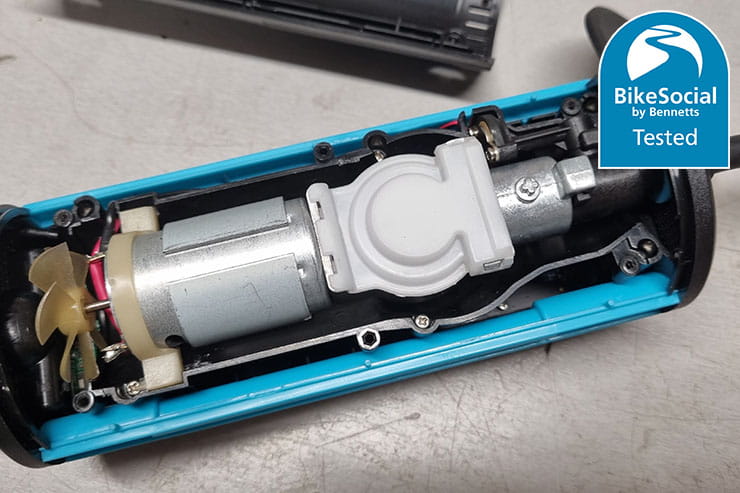 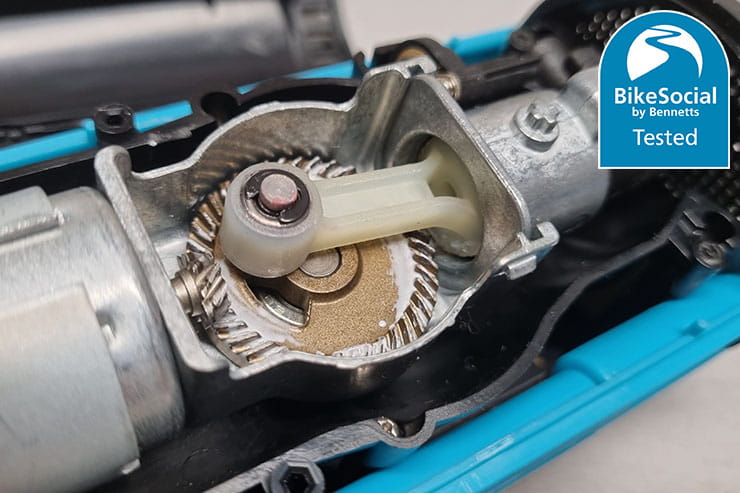 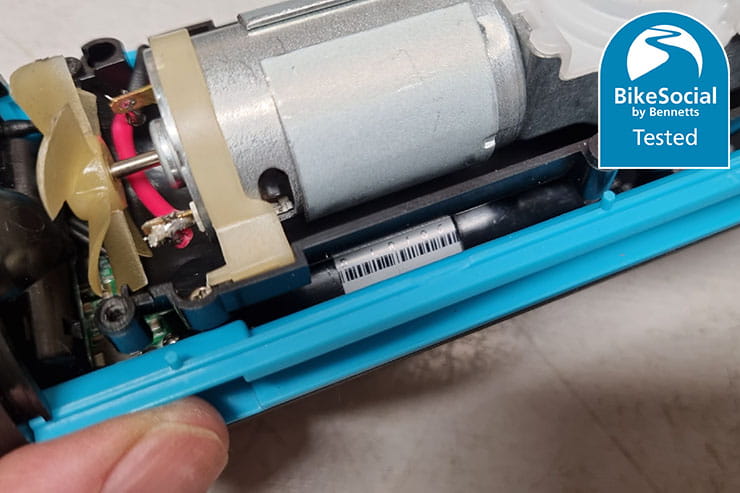 Inside the unit is a fairly simple metal-bodied pump with a small motor driving it. The bevel gear system is easily accessed with a pop-off cover and seemed a little dry for my liking, though it’s easy to pop a little more grease inside if it bothers you. The circuit board and what appear to be two 18650 cells are tucked under the pump

There’s a handy (though not hugely bright or far-reaching) torch built into the top of the unit and it can also be used as a power bank to charge your devices. This will of course have the potential to leave you without enough power to pump up tyres in an emergency, but it could also get you out of trouble if your phone’s flat and you need help. It won’t fast charge a compatible phone to higher voltages, but I did see 5.2V and 1.5A out of it when I connected my Samsung Galaxy S21, and 2.2A when I plugged it into a more demanding device, so it can charge high-draw kit in a reasonable time, though keep in mind the capacity it pretty limited – at best it’s a 3,700mAh power bank at USB voltage. 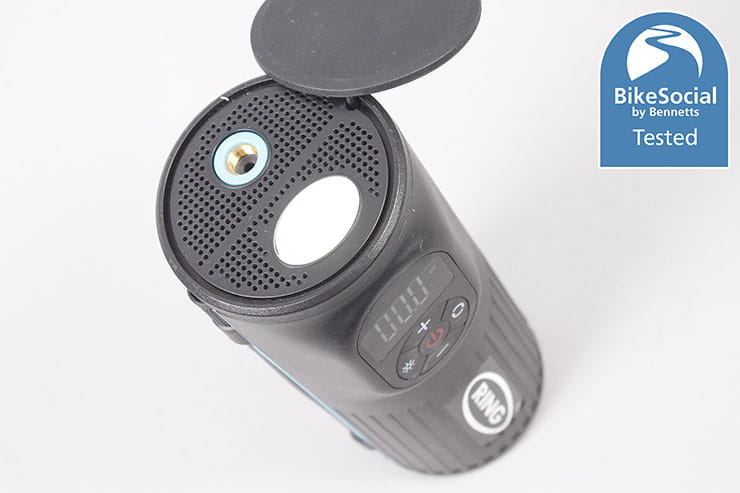 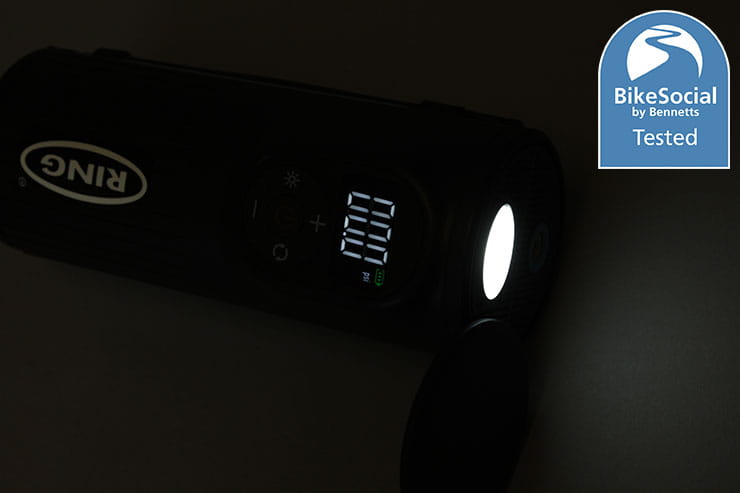 An LED display on the front shows the current pressure in psi, bar or kPA, and there are four memory settings, which can be quickly set then inflated to. Alternatively, you can connect the pump then press the ‘plus’ button until you reach the pressure you want, before hitting the power button to start it running.

Once the desired pressure is reached, the inflator automatically stops. The most common units – psi – have one decimal place on the display, but it will only show in increments of 0.5.

Battery level is confusingly shown as a frame with three bars in, but these don’t drop – green means it’s full or not that low, yellow is about half, red is low. I’d suggest you charge it after you’ve finished using it if you keep it for emergencies, but for general home use like topping up tyres as you check them, you can go by the colour of this LED and just charge it every few weeks or so.

It’s worth noting that you can’t deflate an over-inflated tyre with this fitted – there’s no pressure release valve, so you’ll need to unscrew it, poke something into the valve, then reconnect it. 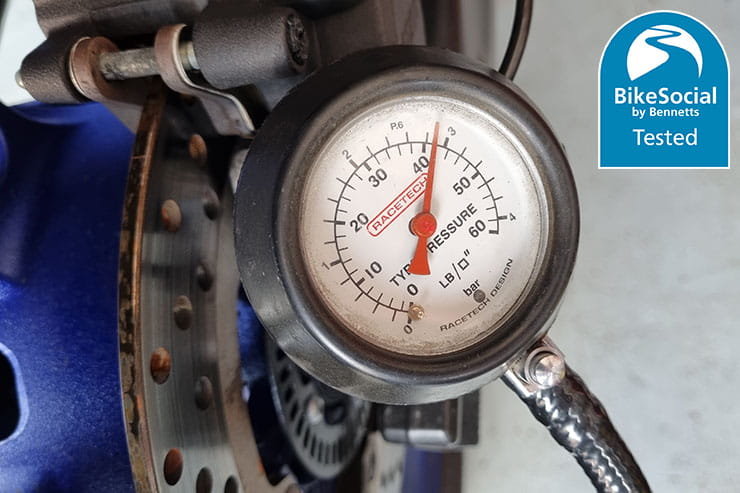 I have a high-quality dial-type pressure gauge that, while not calibrated, has proven very consistent over the years and accurate compared to other premium devices. Impressively, even after repeated testing on several tyres at different pressures, the Ring has always been within 0.5psi of the reading shown on my dedicated gauge, meaning I’m happy to trust it when inflating my tyres. 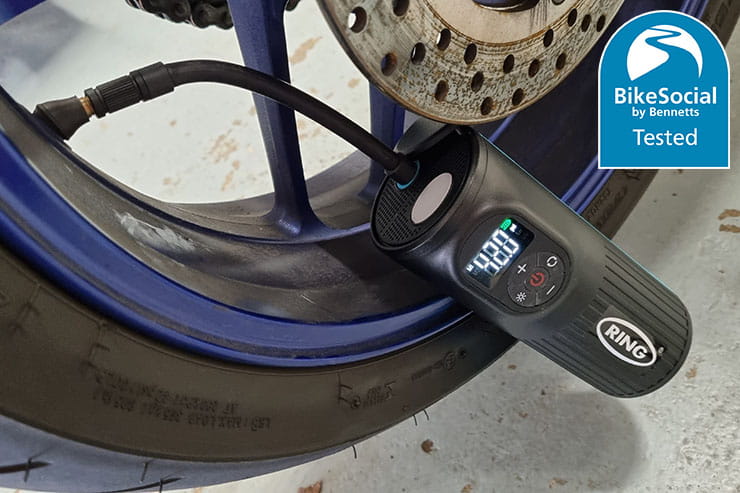 I fully charged the inflator, then left it doing nothing for three weeks. After that, I dropped the pressure of my Tracer 9 GT’s rear 180/55/17 to 36psi, to simulate a drop at a track day. I tend to leave my tyres at the same pressure when I ride on track, and you can read why here, but bringing it back up to 42psi took just 1 minute 29 seconds – a real help if you’re riding your bike home on the road at the end of the day.

Next, to simulate a particularly unlucky ride home, I fully deflated the 120/70/17 front tyre. This took 3 minutes 57 seconds to get back up to 36psi, which is very impressive for such a small unit. After use the battery indicator showed orange, but after a few minutes it was green again.

Then I let the rear tyre down fully, which took 10 minutes 35 seconds to get back up to 42psi. I could hear the pump slowing as the battery depleted, but it still got there fine.

The instructions say to wait 15 minutes after 15 minutes of use; after this run the pump’s body felt only slightly warm to touch, but taking it apart I found the motor was extremely hot, so I really would give it a break between long runs; it’s not designed to compete with an industrial compressor so be sensible.

With it back together and after about 20 minutes I let the front tyre down again. This time it took 4 minutes 53 seconds to inflate – slower, but still very impressive to have fully inflated two fronts and a rear (after partially inflating the rear as well).

Finally, after a couple of hours I let the rear down again, and the pump got it to 20psi after 4 minutes 38 seconds, at which point it cut out. 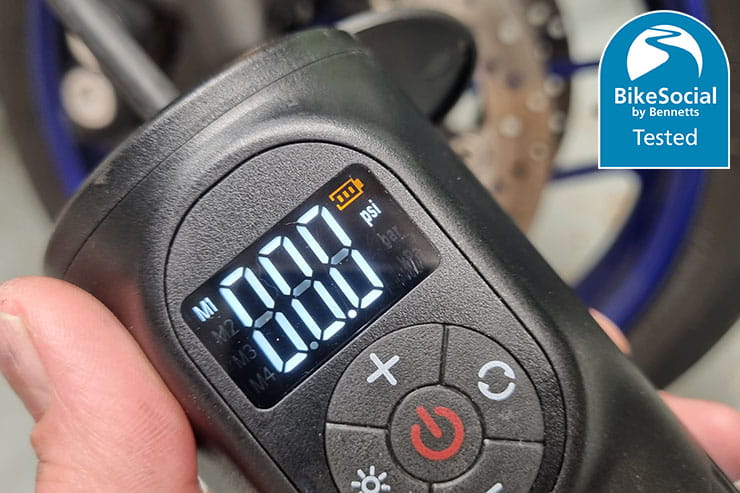 The battery indicator changes colour as the charge drops

A full charge from completely flat took about three and a quarter hours via the supplied micro-USB cable. I’d have liked to have seen this a USB-C given the popularity of this connector now, but it’s not the end of the world.

This is one of those products that I think are going to be a gimmick, but end up being incredibly useful.

For day-to-day use, its accuracy has made me far more likely to check the pressures on my bikes and our cars. Having four memory slots means I have M1 set at 36psi, M2 at 42psi, then M3 at 28psi for my car and M4 at 31psi for my wife’s. If you’re using this with other pressures, it also remembers the last setting you used, making it a quick job of swapping between valves and pressing the power button.

Using a battery-powered inflator at home might sound lazy, but I used to check pressures with my hand-held gauge, then pump the tyres up if they needed it with my stirrup pump, before checking the pressures again and letting them down if necessary (the gauge on my manual pump is woefully inaccurate). With this Ring inflator I just screw it on and press the button if the pressures are a little low, meaning I can check all the tyres much more quickly and easily. 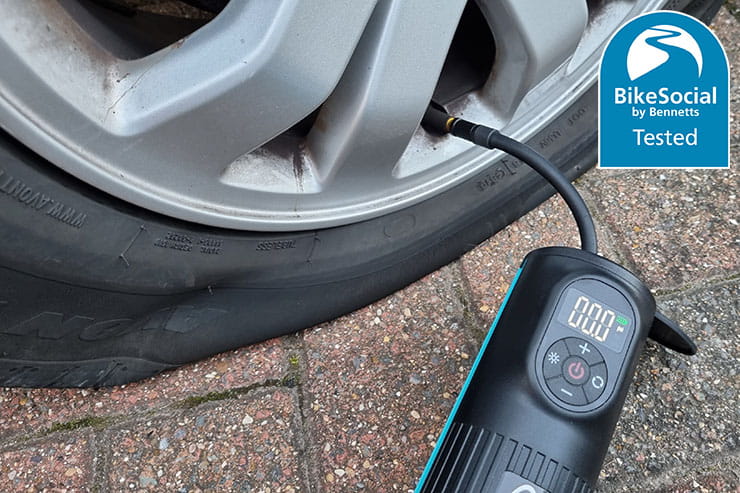 The Ring will happily inflate a completely flat car tyre too – a 215/65/16 took 12 minutes 50 seconds to get back up to 28psi, but do remember that this isn’t designed for repeated use over long durations – give it time to cool off. Still, if you’re filling several large tyres at once, you really should have a compressor.

As an extra bonus, for me at least, the expansion tank on our central heating needs to be charged to 3 bar (43.5psi), which is really awkward to do with my stirrup pump as you have to press it against the wall, making it hard to get the necessary force; with the Ring I can just plug it in and off it goes. When our plumber saw it, he went out and bought one straight away.

For a track-day rider this is such a portable device you can happily drop the pressures, knowing you’ll be able to pump them back up quickly before riding, without having to carry a bulky manual pump, or worrying about hooking a traditional electric pump up to your bike’s battery. I just wish there was a pressure-release valve so you could read off the pressure as you drop the tyre in the first place, rather than have to disconnect, stick something in the valve, then reconnect to see where you got to. And again, if you’re with a large group of mates I would let the unit cool between uses when pumping up if you all want air before heading back.

And finally, as an emergency pump, if carried with a repair kit it could really get you out of trouble. I made up bags with several CO2 bottles that I keep under the seats of every one of my bikes, but I know they’ll only get a very limited pressure back into the tyres – if I had space, I’d carry this with me everywhere, but as I have more than one bike I’ll tend to take the Ring with me on the big trips and tours, relying on the CO2 cannisters for day-to-day emergencies but keeping this always to hand at the front of the garage. 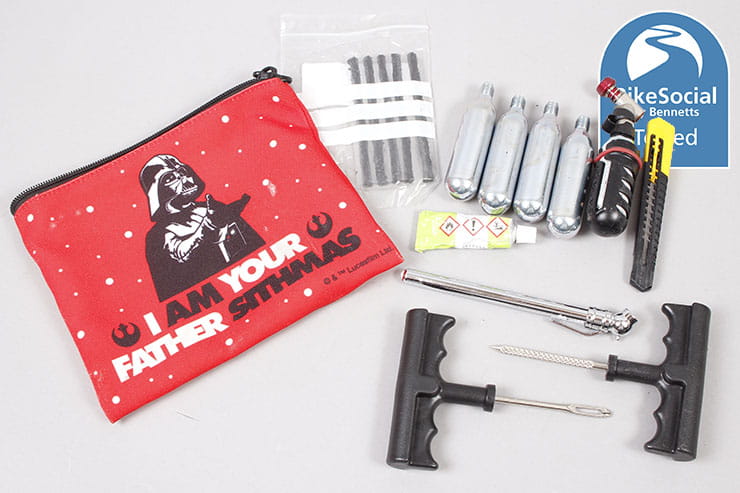 I usually just carry CO2 bottles with my puncture repair kit, but the Ring will ensure the full pressure is reached in a tyre