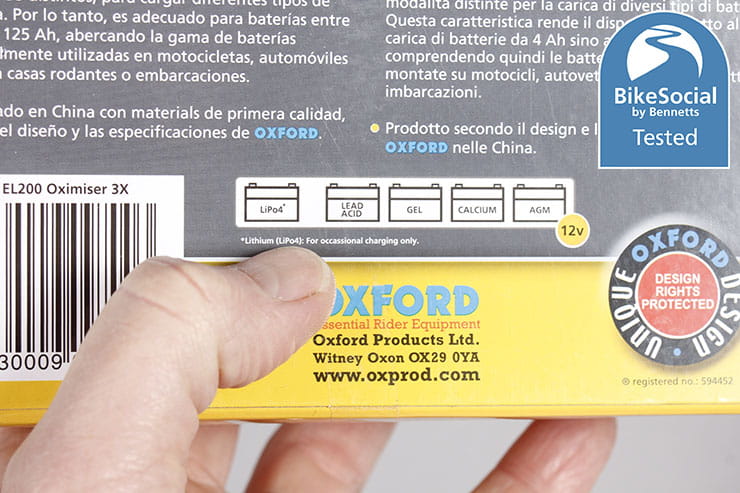 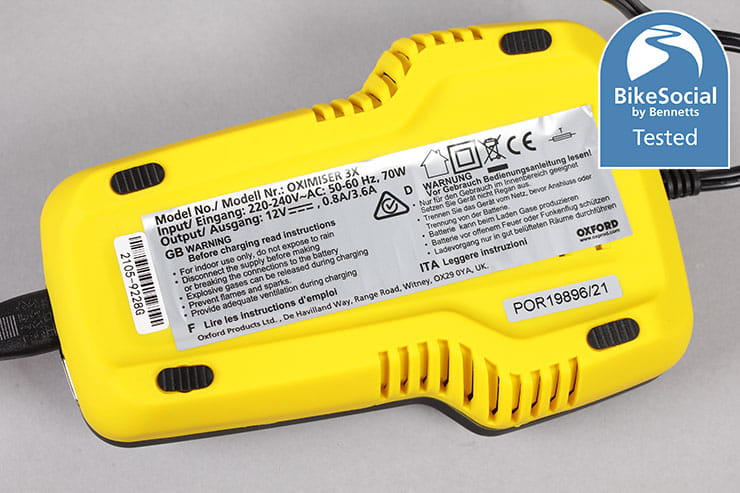 Battery charging used to be simple; ride your bike and the battery stays charged. But now, we tend to have more bikes, with more electronics and electronic security. Those bikes get ridden less often and batteries don’t like a holiday. My 2002 Yamaha Fazer 1000 has carbs and a digital clock. The battery will stay charged long enough to still start the motor for at least eight weeks of winter storage. My wife’s Honda CBR500R has a tracker fitted and flattens the battery in just four weeks if not used regularly.

So, I need a charger that I can swap between bikes to leave running for 48 hours to charge ’em up and then swap to another of the five bikes in our shed. Oh, and because we both work mostly from home now, I also need something that can top-up the car battery too, because that sits mostly outside in all weathers.

Enter Oxford’s Oximiser 3X, a more user-friendly replacement for my old-but-still functioning Optimate III (now consigned to a back-up). The Optimate has done sterling service but, even after all these years, I’m still not always sure what the combination of LEDs are telling me and there’s no display of actual voltage or charge being applied. The Oximiser recovers, charges and maintains batteries of all common types including Lead-acid, MF, Gel. And LiFePO4 (Lithium to you and me), but more importantly, it holds my hand through the process and tells me exactly what’s happening when and shows the vital numbers for my batteries in real time. 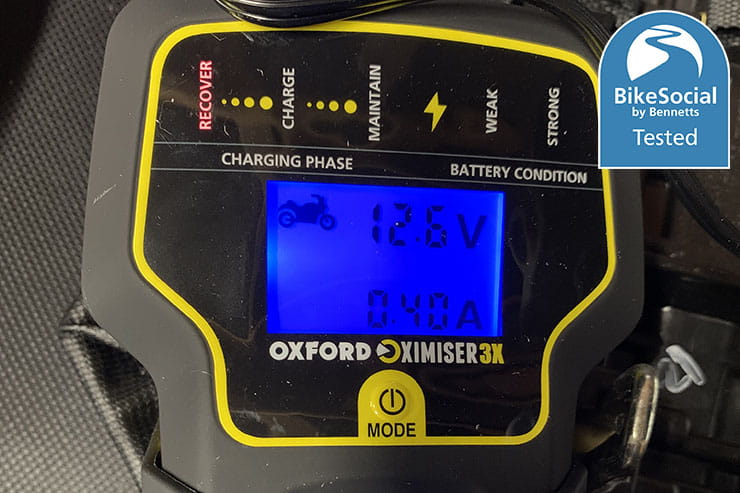 Battery chargers have come a long way in the last 10 years. Time was you needed a different unit for your bike from your car and the charging technology was clumsy and a bit ‘brute-force’. Smart chargers changed all that and many, like this one, have algorithms that assess the condition of your battery and apply the optimal charging cycle to keep it healthy.

Smart charging is all about monitoring the battery condition, applying the correct rate of charge at the right time to keep the battery healthy but also to optimise power consumption by a unit designed to be left plugged-in.

The Oximiser 3X has a soft-start recovery charging mode that helps dislodge sulphate deposits gently from the lead plates, and cycle-charging that helps recover deeply-discharged batteries as low as 8 Volts. It then switches to a fast charge that brings the battery to around 85% capacity and then lowers the charge rate until the battery reaches 100%. At this point it checks the voltage every hour and switches into ‘maintain’ mode.

The unit will also display if the battery is strong or weak, so you’ll know when a replacement is needed. It doesn’t claim to recover deeply sulphated batteries; the manufacturer claims that such batteries are very rarely recoverable and, my personal experience over the last 20-odd year with an Optimate (that does claim to be able to recover sulphated batteries) is that they are right. 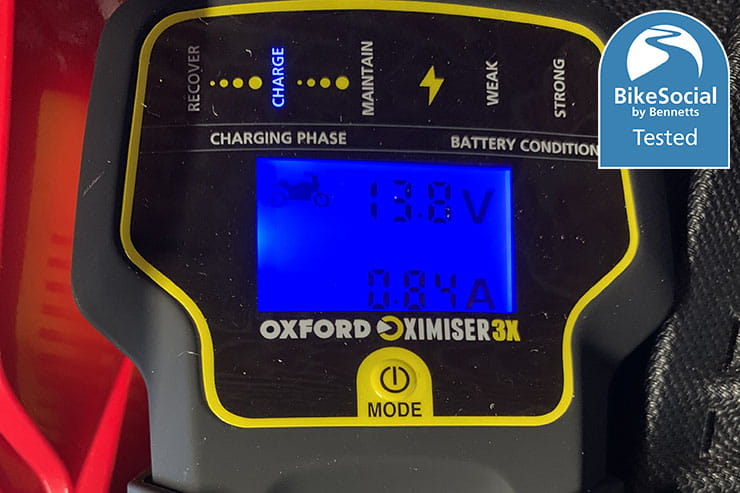 Old school crocodile clips will satisfy the retro-engineers and are handy for those of us who have lots of bikes that don’t all get ridden through winter. For the rest of us, just wire the included fly-lead connector into your battery and connect the Oximiser 3X when needed (or leave it humming away all winter). I bought some additional Oximiser 3X fly-leads for my creaky old fleet for £2.99 each.

The Oximiser 3X has three charging modes. One is for smaller batteries under 36Ah that charges at 14.4v and 0.8A. The next mode is for bigger batteries, MF and Gel and charges at 14.4v at up to 3.6Amps. The third mode is for AGM batteries as used in the stop-start systems on many modern cars. These require a slightly higher charge voltage of 14.7v at the same 3.6 Amps. In comparison my old Optimate III is a motorcycle-only charger with a maximum charge rate of 0.8A.

So far, it’s charged every single one, without fuss and in less than a day. The car battery (whose inactivity was one of the reasons I chose the Oximiser 3X) hasn’t needed charging yet – I’ll let you know.

I don’t have anything with a Lithium battery, but I’m sure it’s only a matter of time and, given that my Optimate has been kicked around the garage floor for 20 years, I’d expect the Oximiser 3 to see some Li action before retiring. 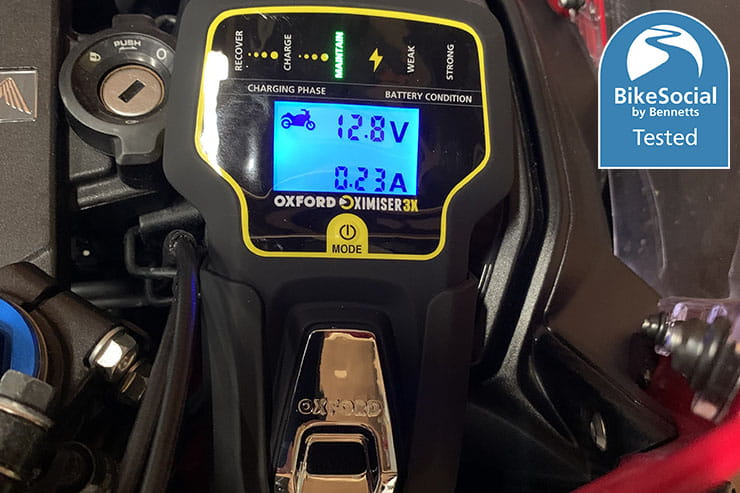 Once fully charged, the Oximised 3X switches to monitoring and maintain mode

The first thing the Oximiser 3X does when you switch it on is check the polarity to ensure the connections are correct. It then tests the condition of the battery to see if it is discharged, deeply sulphated or damaged.

The ‘charge’ mode gives a constant current of either 0.8 Amps or 3.6 Amps depending on the charge mode selected.

Once the Oximiser 3X is happy that the battery is holding charge it goes into ‘monitor’ mode, checking the voltage every hour and topping up if necessary. 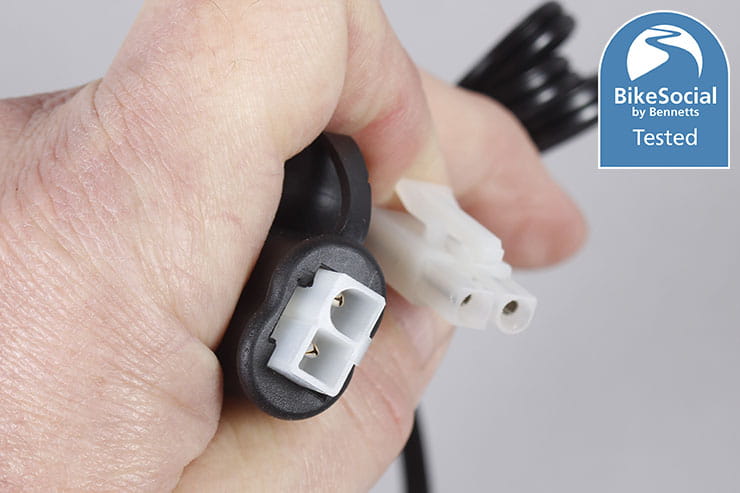 Additional connectors for your other bikes cost £2.99

Knowing what the Oximiser 3X is doing in each cycle allows me to now use it properly and leave it connected for long enough to go through the full cycles; I find it simple to understand what’s going on and what state my batteries are in. It’s much easier to understand than my old Optimate III because the display tells you the voltage, charge rate and whether the battery is strong or weak.

The Oximiser 3X has been simple to use, kept all my batteries in good condition over the last seven months and, shopping around in May, when peak season for chargers is behind us, there are some very good discounts available. That’s important because the RRP of £99.99 is a lot of money for a charger and I’d need to charge my car battery regularly or have a caravan, boat, horsebox etc to justify the retail price. An Optimate 1 Duo also does Lithium (but not car batteries) and retails at £49.99. But I’ve seen the Oximiser at a promotional price in that ball-park recently and for that money, it’s a no-brainer

My only real niggle is that the mains lead is short, making connection to a battery that’s still in the bike a bit clumsy at times, needing an extension lead.

One of the connectors I bought to mount to the bike’s battery failed after two charges, but at £2.99 it was easier to buy a new one than send it back for a refund.

Be sure to regularly check for discounts available through BikeSocial membership.