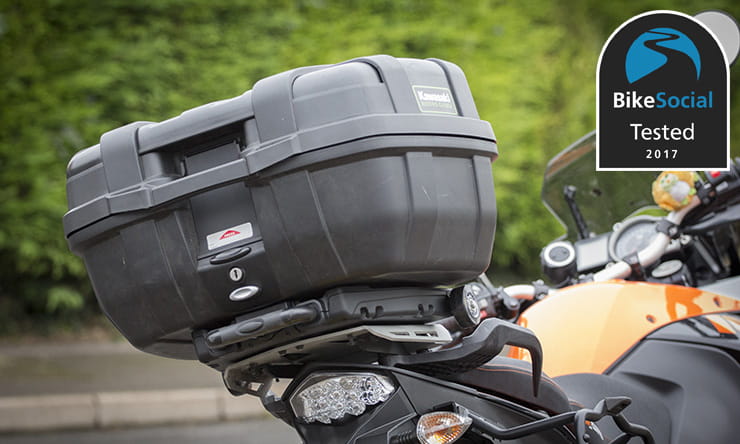 Givi’s S410 trolley is a Monokey-compatible wheeled plate that attaches between the Givi rack on your bike, and the top-box. I’ve been using it on my KTM 1050 Adventure…

The ultimate test of this trolley would be for it to pass through a few airports’ baggage handlers – while I haven’t had a chance to do that yet, I have deliberately dropped it onto concrete five times from a height of one metre, being sure it landed on the wheels at various angles. Besides some scuffs, there was no damage, so I’m confident that this would stand up to the beating it’d receiving being lobbed into the hold of an aeroplane.

The wheels and their fixing points are very solid, with ball bearings to give a smooth action. The handle, which extends up through four sections, is also tough – while it has some flex if twisted, it’s well made and locks securely into the retracted and extended positions with a large button on the handle releasing it. At 5’10”, I found the height to be very comfortable when wheeling it around.

The trolley weighs 2324g, so does add a significant mass to your rack, which likely has a stated limit of around 8kg. 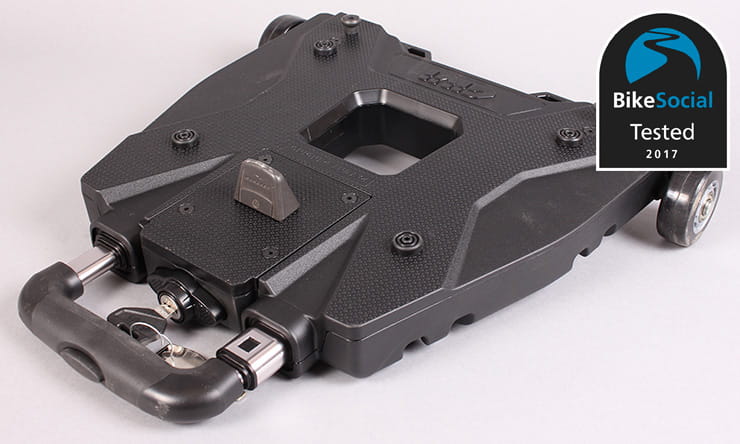 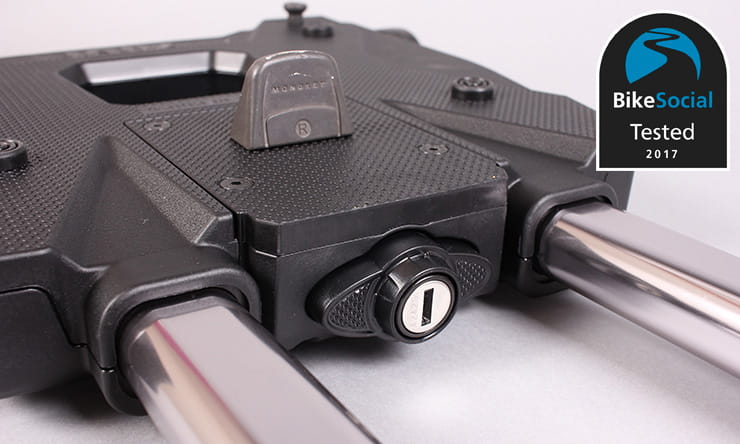 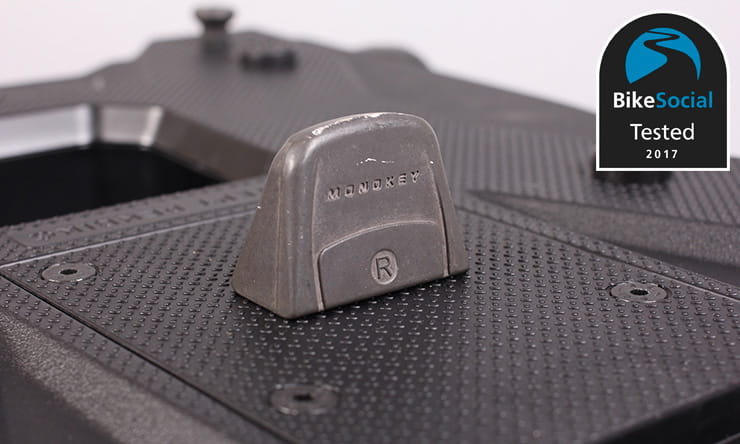 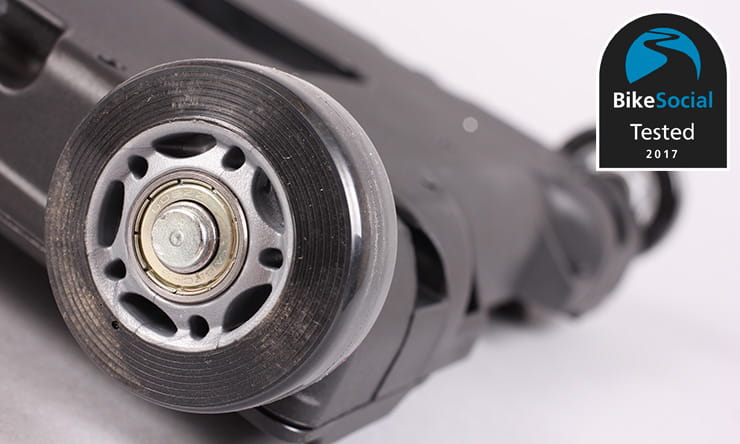 The trolley comes with two keys of the same style as the luggage. It’s a shame then that the locks can’t be keyed alike to your existing kit – the only way to match them would be to buy the SL102 set of two barrels and four keys for £26.60, which would allow you to replace the trolley’s barrel, and that of your top-box. If you have panniers as well, there’s a five barrel/ten key set that retails at £73.40 (you’ll find them cheaper by shopping around), which will replace all the locks in your kit. Unfortunately, Givi doesn’t offer a four barrel set. If you were buying a complete set of luggage and the trolley together, it’d be worth speaking to your dealer, to see if they’d be willing to work something out…

The trolley snaps easily to the rack and the top-box. It’s best to fit the trolley to the top-box first, then snap the lot to your bike, as I’ve found this ensures it’s all locked together properly. Once in place, it’s of course as stable as a direct mounting, and adds little extra height to the luggage.

The lock to remove the box and trolley from your bike is behind the handle, but there’s plenty of room between the arms to easily turn the key and press the barrel in to release. I don’t have my locks keyed alike, so it’s slightly annoying having an extra key on my already crammed fob, but by using the plain metal one for the trolley, and the plastic-covered one for the luggage, I don’t get them muddled up. 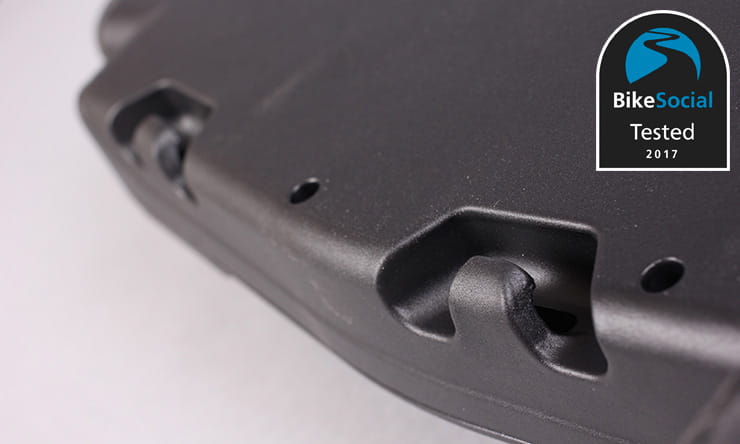 Usefully, there are four bungee points on the underside of the trolley, which adds to its practicality not only when it’s fitted to the box (if you need to strap more on top), but also when it’s on the rack on its own, as it creates some useful extra fixing points. You could of use it to wheel around anything strapped to it, and this is a more convenient way of quickly removing something from your bike that’s strapped down (for security when stopping for fuel for instance) – it’d be less hassle than taking all the bungees off, lugging it around, then strapping it down again. 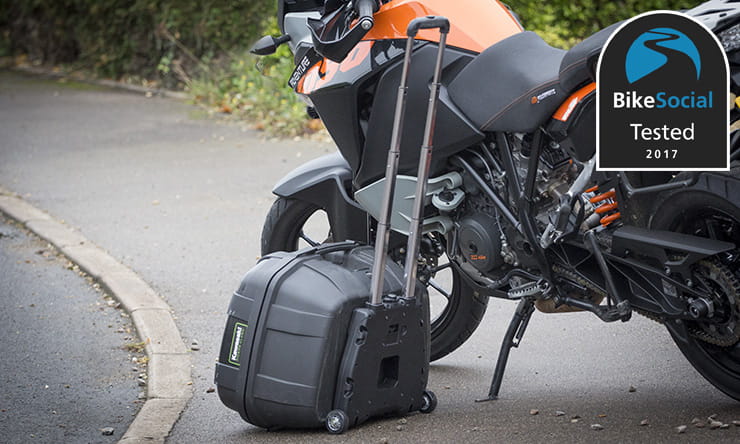 It’s unusual that I need to carry my luggage far, but if I’m also manhandling the panniers, the trolley can be handy. A smaller box (for instance the 33 litre Trekker pannier, which also fits) might get through aircraft carry-on, but I’m confident enough in the build-quality that it’ll survive going in the hold with my 52 litre case.

It’s not an accessory that every Givi luggage user is going to need, but when you consider the convenience of also being able to quickly fit and remove strapped-down items – maybe things that are too big for a top-box – its potential uses become more apparent.

I’d have liked to have seen the option to buy one lock barrel that pairs with your existing keys, but otherwise, if you’re going to get the use from it, this is another well-made piece of kit from Givi…