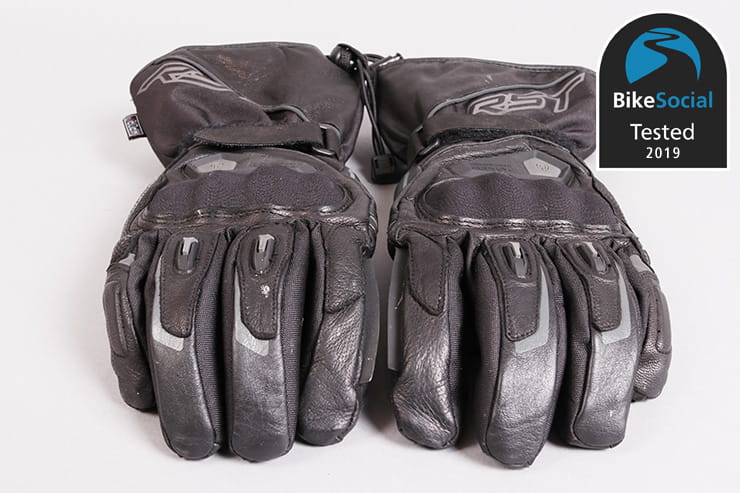 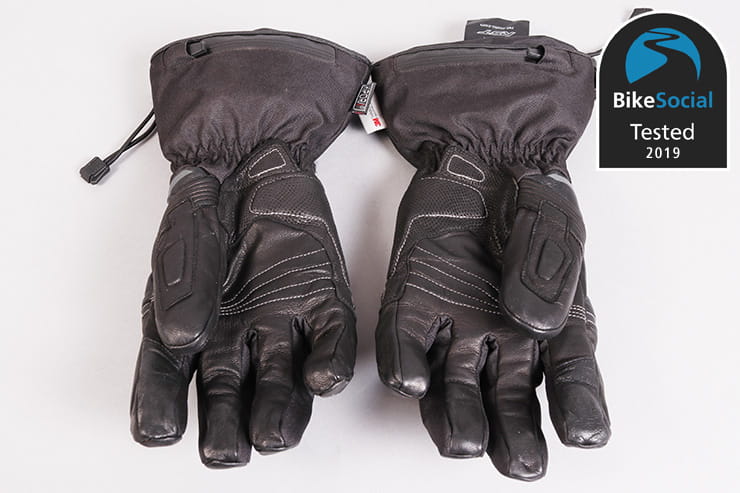 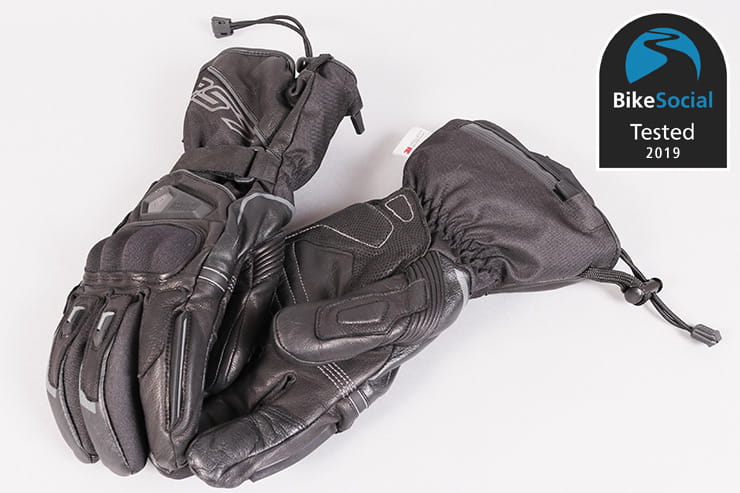 Granted, posting a review of heated waterproof motorcycle kit in Spring might seem a bit late, but I’m still wearing these RST Paragon Thermotech gloves on many of my daily rides. Completely self-contained with a battery in each glove and a power button on the top, these gloves have been tested on my 20 mile commute, 100 mile blasts to meetings, and a 400 mile round-trip to Wales…

Needless to say, fit is very subjective, but the RST Paragons in large (my usually glove size) are perfectly sized for me. The pre-curved fingers are just right, with only the smallest amount of slack in the tip of the little finger.

Feel is nothing like a pair of race-gloves, as you’d expect, but they’re far from bulky and don’t ruck up around the throttle tube.

The gloves are touch-screen compatible, so you can operate your phone with them if needed; it’s only the forefinger on each glove that works though.

Overall, for a pair of winter gloves, the fit and feel is very good. 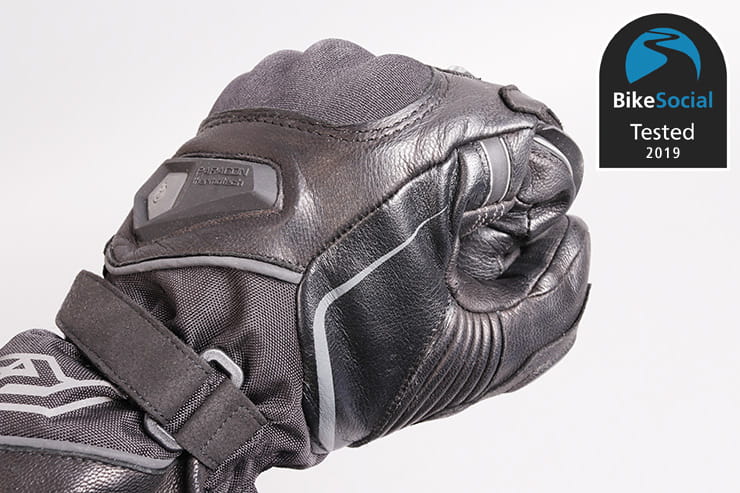 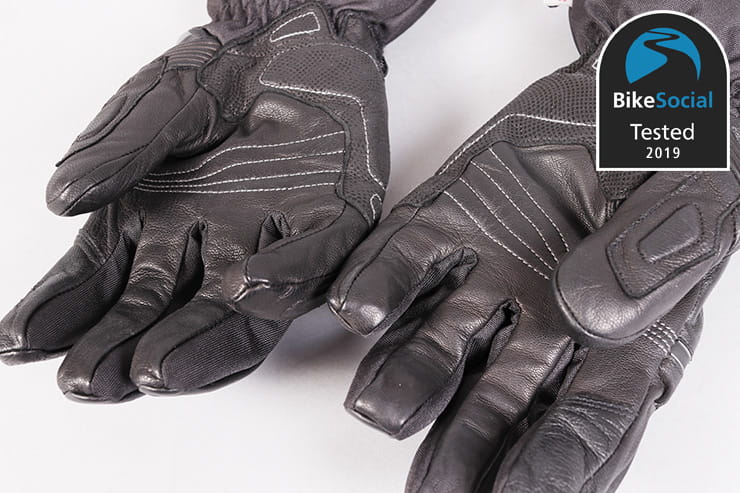 Without the heating, these are a pretty good pair of winter gloves – they’re not the warmest you can get, but they offer a good balance between bulk and insulation.

Turn them on, though, and they soon warm up, with three levels of heat. For a short ride home around freezing point, I have them on full-power, but on longer rides I’ve tended to start at full to get the heat up quickly (there’s no thermostat), then drop down to medium.

Of course, how effective any glove is at keeping your hands warm – heated or not – will depend on the wind deflection on your bike; hand guards will keep the wind away and make a big difference, or bar muffs will keep you super-toasty.

Combine some heated gloves with heated grips and you’ll be a very happy rider – heated grips can only warm your palms, but you’ll lose heat from the tops of the gloves. Gloves are only heated on the top, so while effective without powered grips, when combined, you shouldn’t suffer numb hands again. 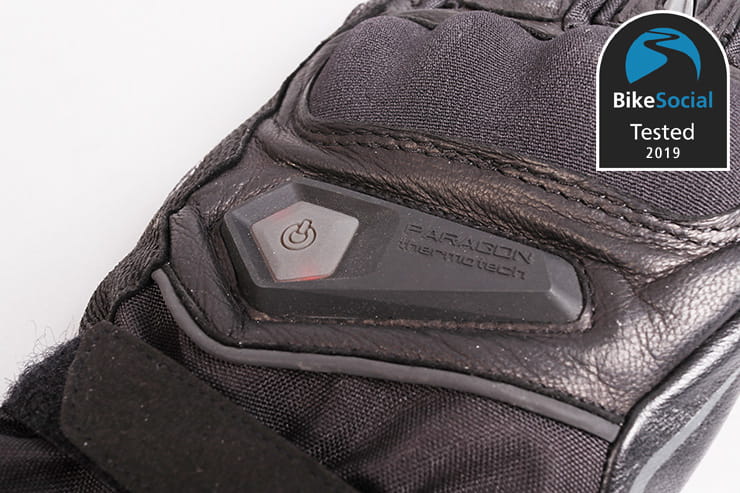 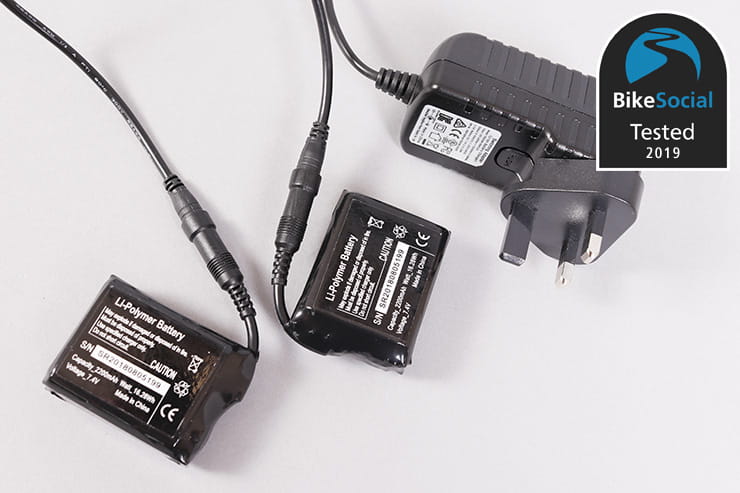 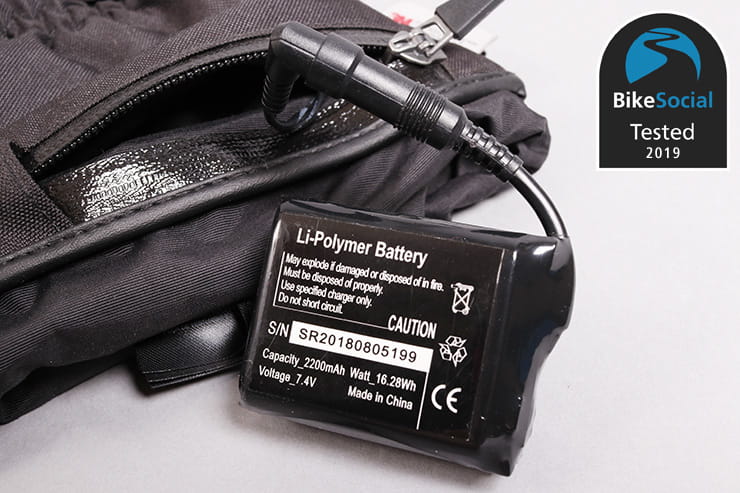 RST claims up to four hours of battery life from each of the 7.4V 2,200mAh lithium-polymer packs (which are included). That’s at medium power though, so I tested them with a digital thermometer inside, the cuff sealed, and an ambient temperature (on my desk while working) of 20°C. Remember that the temperatures achieved are without the wind taking the air away, so they don’t reflect what your hands will get to:.

On full power, within less than five minutes the gloves hit 40°C and didn’t drop below that until a couple of minutes past three hours, when they shut themselves down due to flat batteries. It was only about five minutes before this that the power light on the back of the hand started flashing, so there’s very little warning that you’re low on power. This is to be expected with the extremely flat delivery – followed by a sharp drop-off – of any Li-Po, but it does mean that you should keep them topped up to avoid getting caught out.

To test the medium power setting, I first ran the gloves at full power for ten minutes, as I tend to during a ride. From there, I switched them to medium power, from which they carried a pretty steady 38°C until 3hrs 48mins, when power was lost (remember this was with no wind chill, so the lower output wouldn’t maintain as high heat as full power on the road). The light in the power button was flashing for just over ten minutes before the gloves shut down.

On the road with no bar protection, I’ve generally found the low-power mode to be too weak, but with bar-muffs it could be capable of keeping you warm. The temperature levelled out around 30°C (this wouldn’t be maintained with air rushing over the top of them), and they ran for an impressive six hours, the light flashing around ten minutes before that.

For most UK rides, the medium power mode will be fine on a bike with little or no wind protection at the bars, so four hours of runtime is pretty good – certainly for most people’s commutes it’ll be more than enough for at least a day or two. If you’re regularly riding for more than four hours in the winter then I feel for you, and you might want to consider some gloves that are powered by the bike, rather than having their own battery – see our product reviews for other options.

The mains charger comes with UK and European plugs and outputs 0.6A to each glove – from flat, they’ll take just over 3.5 hours to charge. 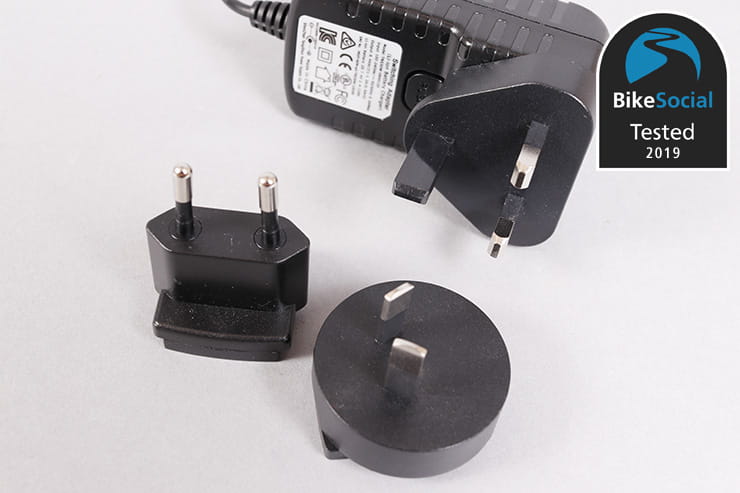 Each glove is turned on by holding the rubberised button on the back of the hand for two seconds. They start in full-power mode with the button glowing red, then just tap them to cycle to medium (red and green), low (green), then back to full.

They’re easy to operate, but the long press can be a little fiddly if you’re riding – turn them on before setting off to avoid having to push the left glove onto the end of your bar to activate – or the bottom of the mirror – when your right hand’s on the throttle.

The LEDs inside the button are hard to see in bright daylight, but they also don’t dazzle or distract in darker conditions or at night, which is when these gloves are most likely to be used. 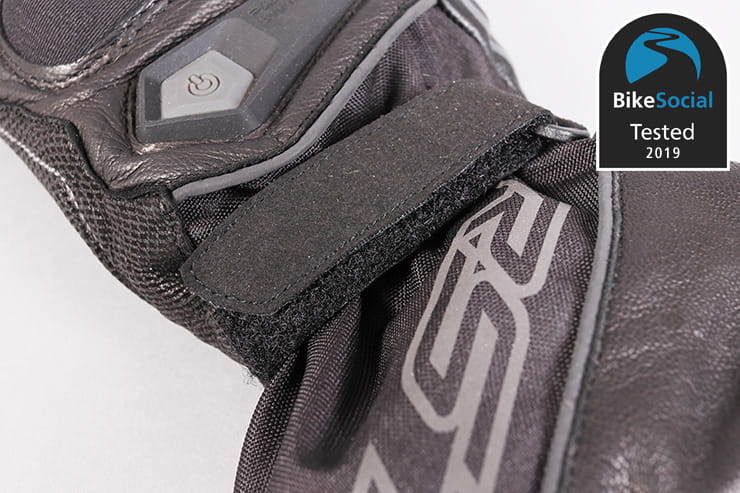 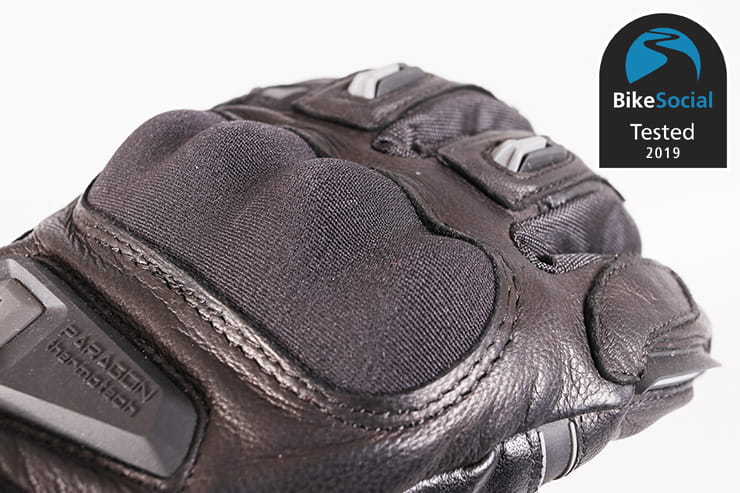 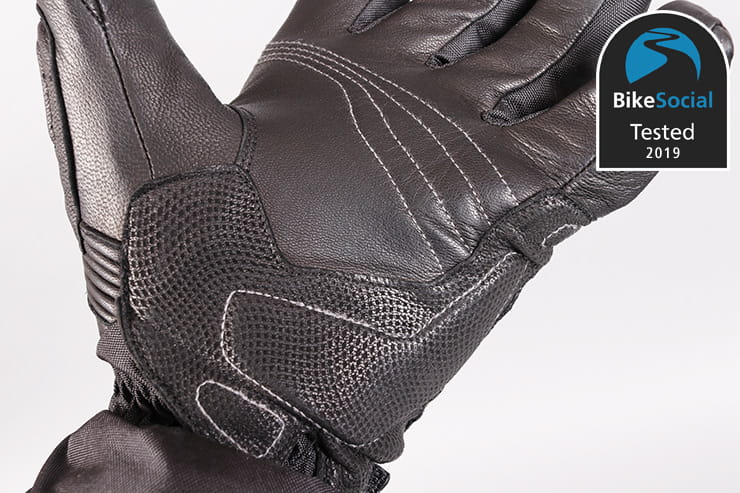 As all gloves sold in the UK should be, the RST Paragons are CE approved to EN 13594:2015. This is no surprise, given RST’s excellent attitude when it comes to meeting the correct standards for motorcycle kit across its entire range.

Hard knuckle protectors feature on the gloves, which are constructed predominantly out of leather, with textile in some less abrasion-prone areas. The palm is double-layered, and the outside edges of the hands are also well protected.

The gloves are secured to the hand with a wrist-strap on the top; while effective, it’s got no pull-tab, so can be a bit awkward to grip with the other glove when it’s well stuck down with the hook-and-loop fastener. There’s also no retainer, or even a wider end, so it has a tendency to pull out of the buckle, which can be mildly frustrating at times. A small piece of tape on the end would cure both minor issues, but I’d like to see future versions with a rubberised tab on the end.

There’s no strap on the cuff, but it’s closed with an elasticated drawstring, the toggle of which is secured to the glove, making it easy to operate with one hand.

The SinAqua lining has proven totally waterproof in use. The best way to use waterproof gloves is with the cuffs tucked inside the sleeves of your jacket, as otherwise water can run down your arm into the glove. This can be alleviated to some extent with the drawstring but tucking them inside is still the best option.

Due to the battery fitted into the rear of each glove, getting them under your cuffs can be hard – check them with your own jacket, but on the Rukka Navigatorr I was able to manage it (though only if I didn’t wear my watch). This is the only flaw with having the battery in the gloves, but I must admit that it hasn’t put me off them.

If you run the Paragon Thermotechs with the batteries taken out they fit a lot more easily, giving you a little more versatility if you’re using them for waterproofing in warmer weather.

It’s great to find a visor wipe on each glove – it’s fairly short and shallow, but it’s better than nothing and helps to reduce scratching of your visor. 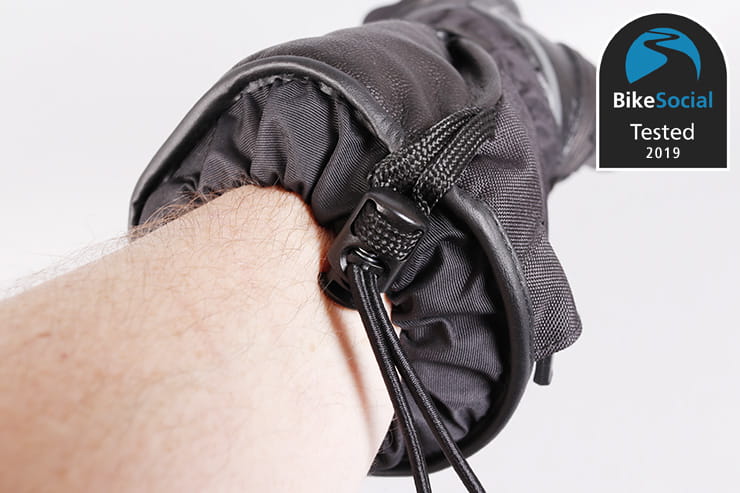 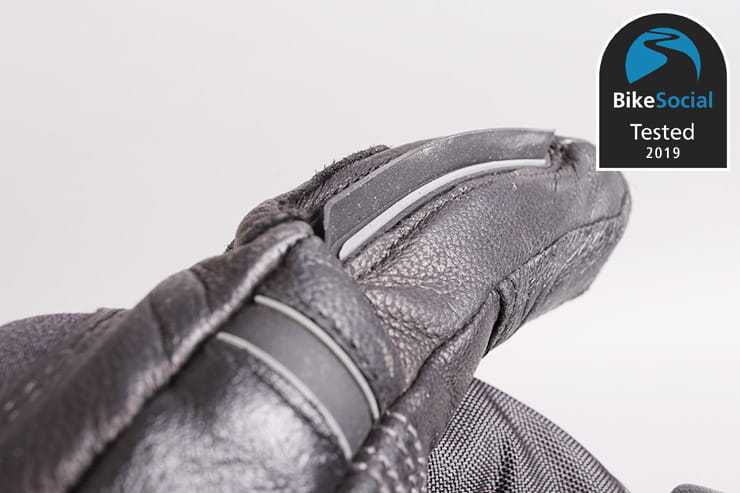 The lining’s soft and comfortable, without feeling slick or sweaty. It’s also showing no signs of pulling out, thanks to the combination of a good fit and a soft but smooth interior.

The great thing about a pair of heated gloves with their own power-source is that they can also be worn off the bike… they’re great for dog walks in the winter.

For most rides, the typical four-hour battery life will be fine, but it’s a shame there’s no option to power these gloves from the bike too – others do have this facility, but not at this price-point once you’ve bought the batteries.

Personally, I much prefer a pair of self-powered gloves as they’re less hassle to put on and take off than wired versions, even when I already have a heated jacket plugged into the bike.

RST is proving itself a solid manufacturer of good-value CE-approved bike kit, and these versatile heated gloves are no exception; definitely recommended for winter riders.