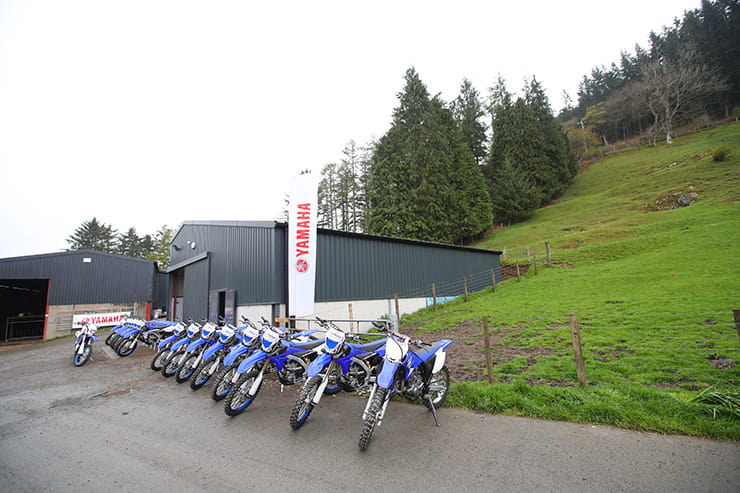 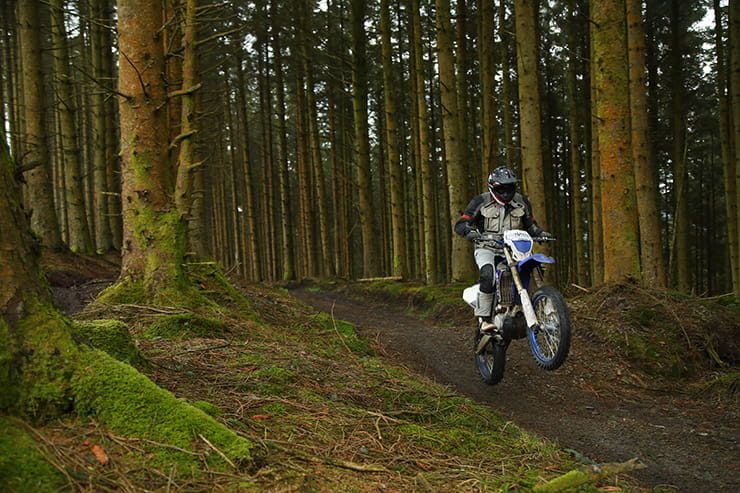 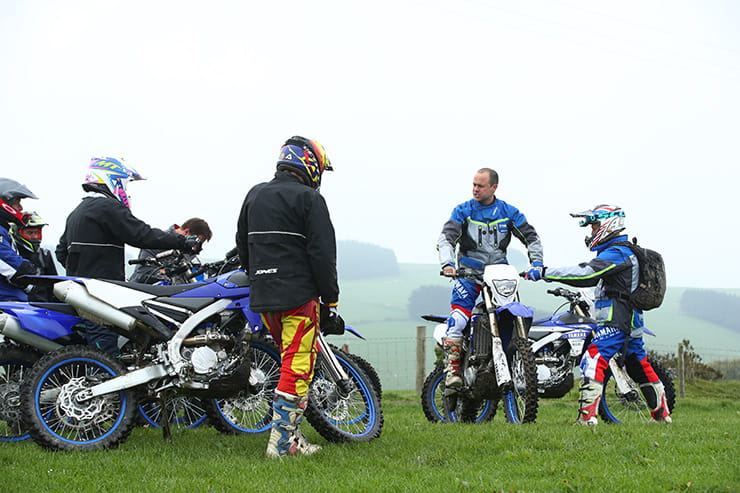 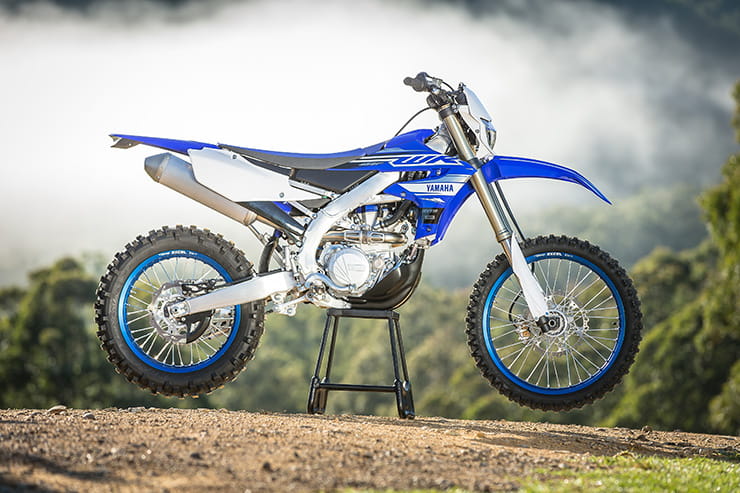 Got an adventure bike but never risked damaging all that expensive plastic and paint by taking it off-road? Don’t blame you – most of us wouldn’t either, truth be told. It’s just too risky – have you seen the price of replacement bodywork and bar ends?
But most of us quite fancy the idea – the dream of spending a week trail riding in the Pyrenees is wrapped up in the motivation to ride an adventure bike in the first place. We’ve all got the call of the biking wild lurking inside us, partly because many of us cut our two-wheeled teeth mucking about on field bikes off-road, and partly because a motorbike is just as dynamically disposed to exploring rough terrain as it is smooth tarmac.

And, as it happens, so are we. The urge to explore and push back boundaries, on road or off it, is integral to motorcycling and to motorcyclists. After all, the only reason we’re on a bike in the first place is because at some point we had the courage to overcome our fears and unlock a higher level of fun and excitement than merely pedalling.

All of which explains why BikeSocial’s Chris Newble and I are looking forward to a day at the Yamaha Off-Road Experience in mid-Wales. 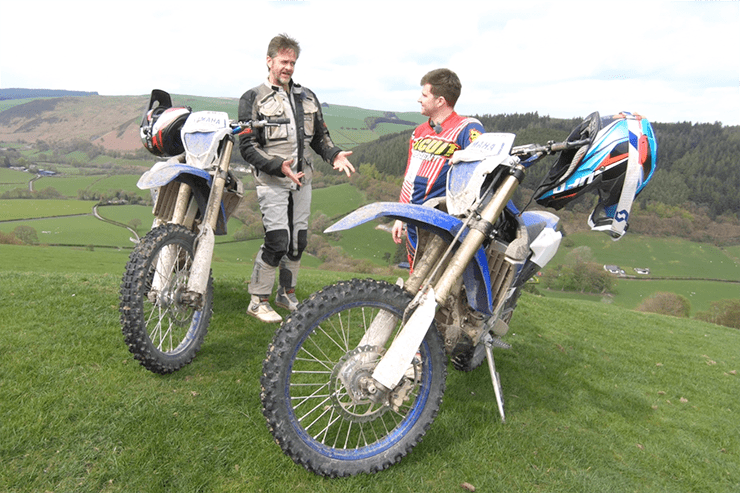 Mate, are you sure that’s what it says on your shirt?

Chris has got plenty of miles under his wheels on tarmac, but has never ridden off-road and wants an introduction. “It’s a kind of riding I want to have a go at,” he says before the day begins. “It’ll be a lot to take in but I’m excited. I’ve never done it before and just looking at the bikes (Yamaha WR250s, the new-for-2019 WR450 and a TT-R230 to begin with), they look quite intimidating. But hopefully they aren’t once you’re rolling.”

The Yamaha Off-Road Experience is designed around helping anyone and everyone make the skills and technique transition from tarmac to trail – from total novice (as in never actually having ridden a bike at all) right up to pre-Dakar training, young or old, girl or boy. But the YORE team are particularly good at coaching the fragile egos of middle-aged men who fancy themselves as handy riders on road, but don’t want to look daft or hurt themselves in front of their mates off-road. Sounds right up my alley. 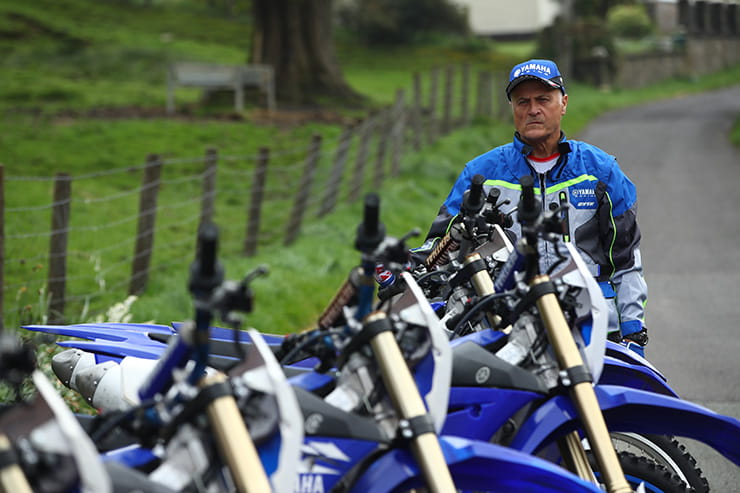 Ten British Enduro titles and multiple ISDE Gold medals are nothing compared to 25 years teaching idiots how to ride. Geraint Jones has done both.

Established in 1994 by multiple British enduro champ Geraint Jones and now run with his sons Dylan and Rowan – both national enduro champs in their own right – the YORE is one of the longest-running off-road schools in the UK. It’s one of many manufacturer-supported off-road centres in Wales – because Wales has the room to for riding off-road en masse without upsetting anyone. But one way YORE differs from some of the others by the sheer variety of its riding environments – an arrangement with the Forestry Commission means access to over tracks and trails through 10,000 acres of forests, hillsides, rivers and fields. If you want wide-open firetrails or narrow forest paths, stony hill tracks or wet, muddy trails, YORE has them all. 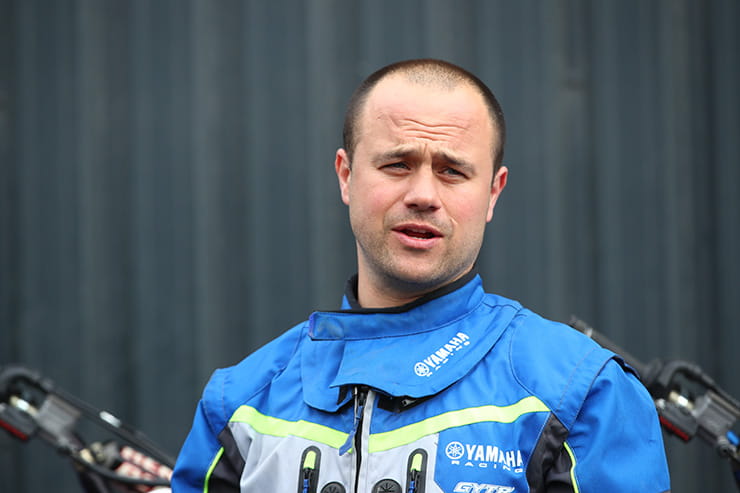 And, according to Dylan Jones there are enough miles of riding to spend an entire day bouncing around and not even touch the sides. Good news for those who don’t like to feel constrained by man-made, arena-style riding environments or barren, open hilltops. 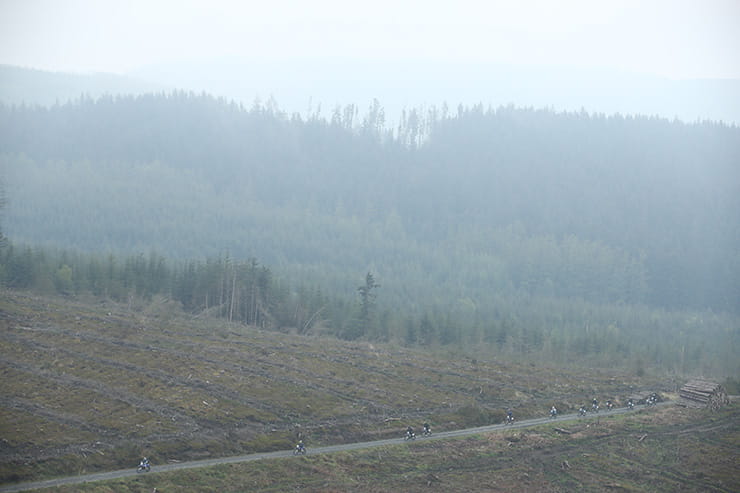 Room to ride – this is what off-road should be like.

After kitting up, the day begins with a few dos and don’ts of riding off-road as Dylan runs through basic riding techniques, body positioning and control principles.

As a committed, lifelong road rider, the thing about off-road I find hardest to adapt to is the way everything is strangely similar, but also completely different. It’s like everyone is speaking English, but it’s a jumbled, nonsense kind of English. At first, it’s disorientating and disconcerting.

Even the kit you wear is kinda like road kit, but not. Off-road boots are big, clunky things with lots of buckles – my advice is avoid massive motorcross-style boots because it’s like wearing welders’ gloves on your feet; you can’t feel a thing. Trials boots have slightly less off-road protection, but are much more comfortable have more feel for beginners.
But as you stand there feeling like you’ve all the gear and no idea, listening to Dylan talking about pushing the bike down, into the corner, away from you in exactly the opposite way you do on the road, it all still feels incredibly, worryingly alien. 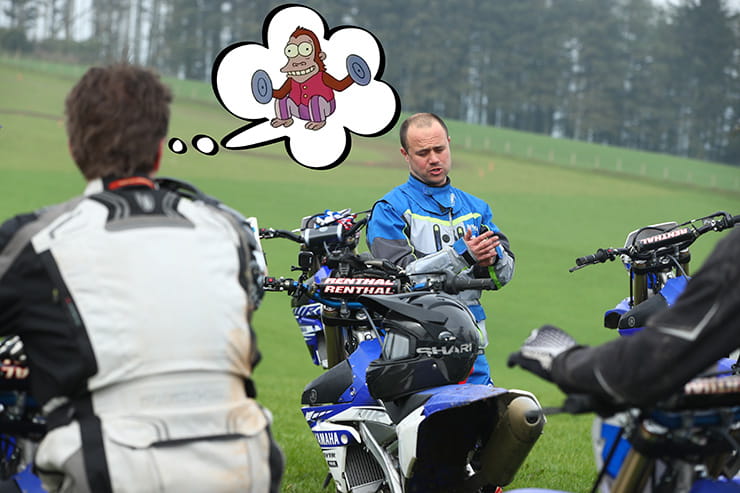 But Dylan keeps the initial chat to a minimum because nothing calms nerves quite like getting on a bike and riding it. So we saddle up and set off for the hills, Chris on a TT-R230 while I take a WR250.
One of the common mistakes road riders make off-road is assuming a bigger engine is better. It isn’t, unless you’re at a fairly high level of riding. The reason isn’t necessarily controlling the higher power output per se, it’s the scale of what happens when you inevitably run out of technique, or run out of riding fitness (which is usually down to poor technique anyway). 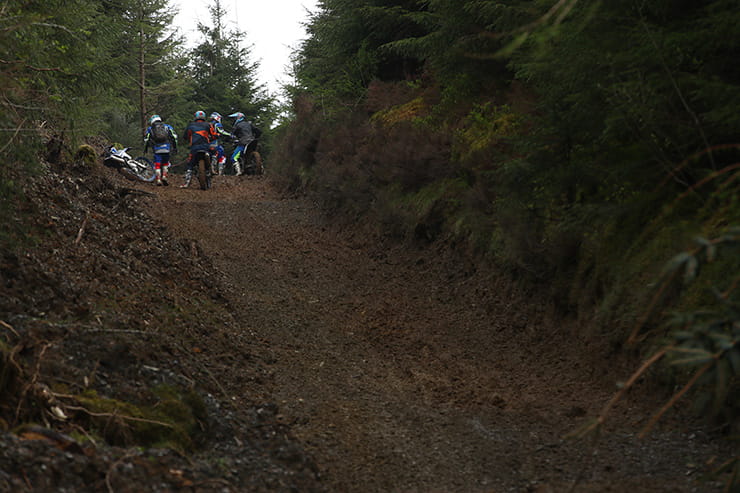 Happens to the best of us. Literally.

A bike like the new, 2019 WR450 – even with switchable and customisable engine mapping to tame it – is sometimes over the top even for fully capable riders like Dylan: he admits he only occasionally uses the bike in full power mode; most of the time he’s running a lower-powered, softer, torquier setting, designed to find traction. For someone like me, it’s so far away from what suits my gentle bimbling as to be pointless; a WR250 is already more than I need to explore the foothills of my nascent off-road ability. 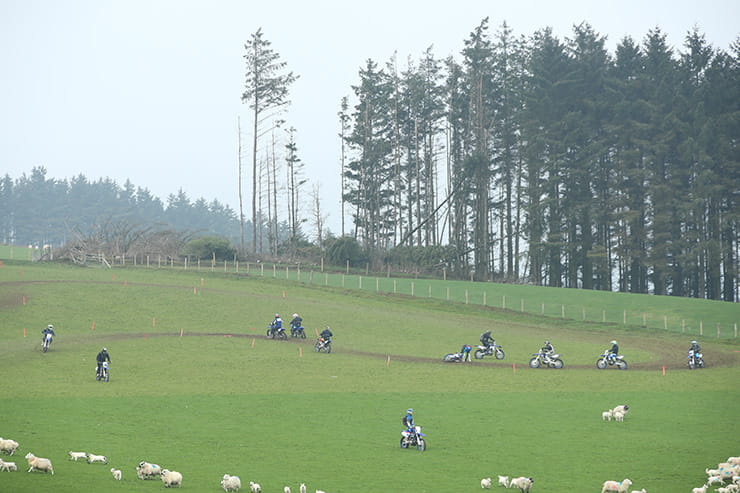 Sometimes it’s hard to tell the sheep from the humans.

By now we’ve ridden up a gravel track onto a grassy hillside. Here, we ride around in a big figure of eight on the wet grass, exploring the riding physics of corning in low grip conditions – the rider’s weight balance, shifting front-to-back and side-to-side, pushing the bike down into a corner, and sticking you leg out to prop the front end up. It’s all counter-intuitive and unnatural, which is why at every turn I have to consciously think about what I’m doing rather rely on a well-practiced automatic sub-routine. It makes everything awkward and ugly and I find it intensely frustrating because I know what I really need is a week of doing nothing but this so it comes naturally. If nothing else, it’s a good reason to make sure I come back as soon as I can – but in the meantime... come on, can we go and ride in a forest, please? 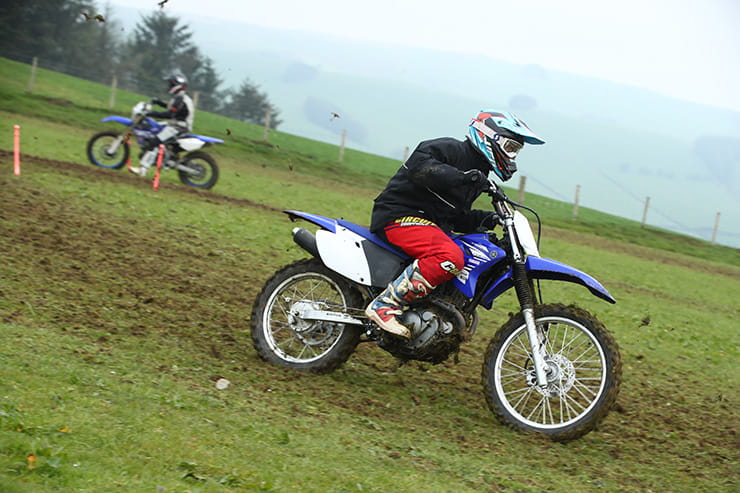 Have you got your knee down yet?

Finally we drop down from the hilltops and into the woods – and, to me, this is more like it. I have no idea what I’m doing, but it feels like we’re off-roading as we skitter and skate down gravel paths, then through muddy tracks, and onto slippery, tree root-puddled forest trails. It’s exhausting and I’m sweating buckets – but this is fun. Every so often Dylan stops, lets us take a breather (he’s not even off tickover), and chats about basic techniques and gives advice and tips. It’s a thoroughly civilised way to learn – it’s not so much being taught as being guided; a much more respectful (and face-saving) way of teaching grown men and women without being patronising. It’s also a great way to develop confidence alongside technique. 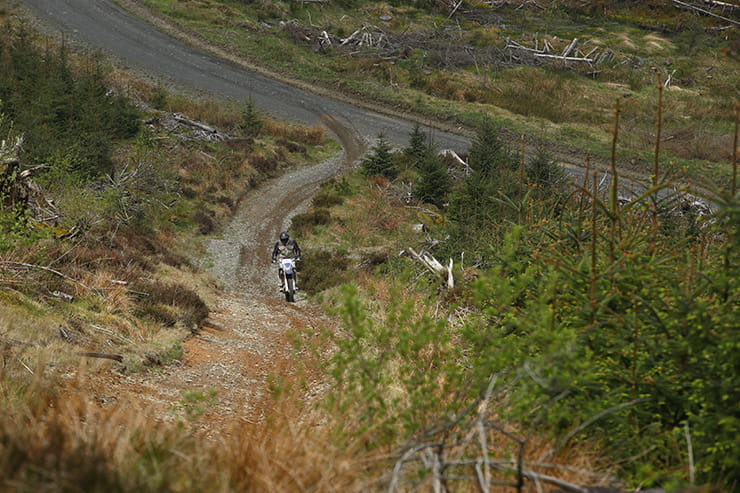 What goes up must come down.

And that’s perhaps at the core of why the Yamaha Off-Road Experience suits me, personally, better than any other off-road school I’ve tried: it’s built around fulfilling the ambition to explore our environment – the off-road riding dream we all have – as much as teaching us competition-based skills and techniques. Because we don’t all want to go faster off-road; at the moment, I’m more concerned about staying upright and enjoying the view.

Which, I would guess, is the ambition of most of us with an adventure bike. And why the Yamaha Off-Road Experience will also suit you down the ground. 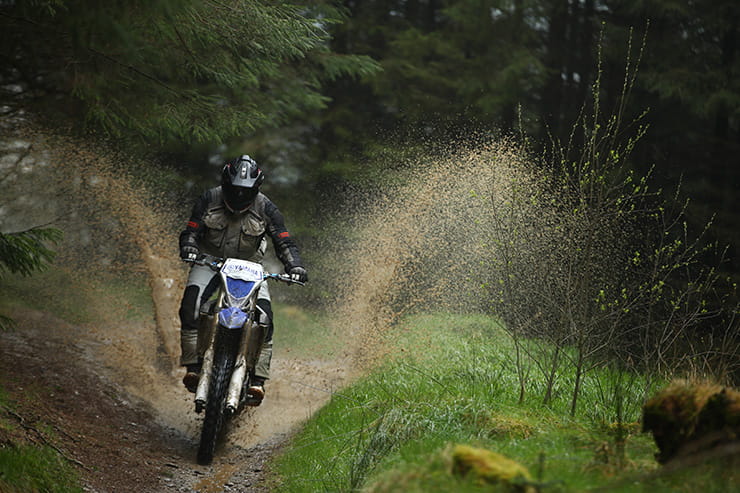 We’re all just big kids; ultimately, it’s all about splashing in puddles.

More details about the Yamaha Off-Road Experience can be found here.

Courses can be tailored to suit anyone’s needs and tastes. But usual packages are based around:

“It’s a fun day out on an off-road motorbike with some basic tuition, aimed at motorcycle riders who are looking to try out off-roading.”

“A variety of one and two-day packages on road and off-road, covering a lot of miles on exclusive YORE terrain. The new Ténéré 700 will soon be part of the riding fleet, alongside the XT660 and XTZ1200.”

“The enduro training schools are aimed at regular trail riders through to National level competition riders. The emphasis of these schools is to help improve and learn new riding skills.”

“The 1-2-1 Enduro coaching allows us to give you 100% of our attention, allowing us to tailor the session to your specific ability, needs and requirements. It ensures you get as much from the session as possible, and offers the biggest steps forward whether you are a recreational trial rider wanting to develop the skills to make the day easier, or give you the skills and confidence to tackle more difficult trails.”