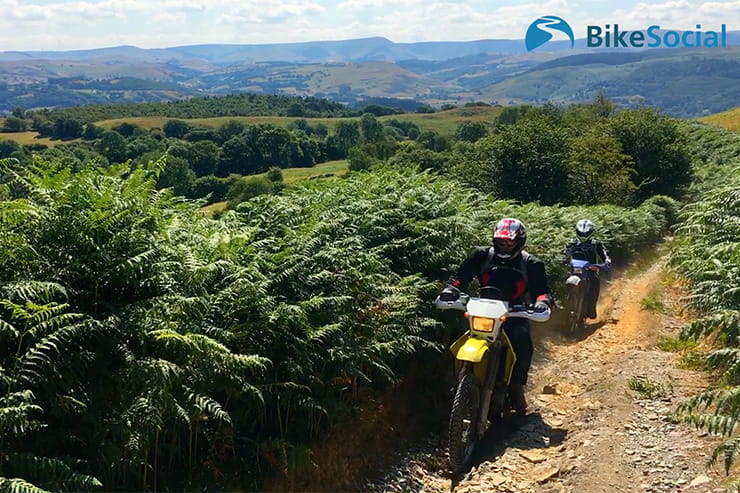 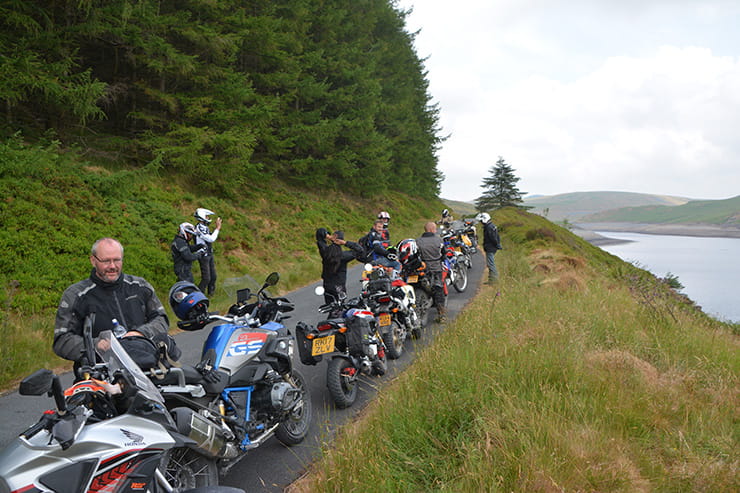 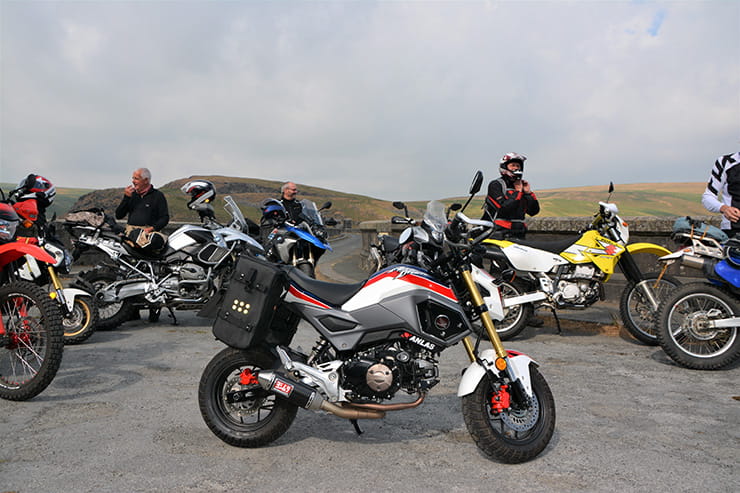 By teaming up with round-the-world adventurer Nathan Millward and Welsh trail expert Tony of TrailRidingDays.com, BikeSocial’s parent company Bennetts Bike Insurance offered customers the chance to spend two days riding some of the country’s best green lanes and byways at a heavily discounted rate. Usually costing £275, Bennetts customers could log onto their rewards portal to book the trip – which included three nights’ accommodation at the Mid Wales Bunkhouse – for just £175.

I attended as a representative of Bennetts, and to experience the riding for myself…

Aimed at those fairly new to trail riding, the first morning saw an introduction to the basics – this covered courtesy to others using the legal byways (walkers, horse riders, quads and cyclists, not to mention other motorcyclists), and the importance of respecting the environment.

As members of the Trail Riders Fellowship (TRF), Nathan and Tony made it clear that motorcyclists should ride quietly and unobtrusively, and with the least impact possible. All gates should be closed by the last rider through (unless tied back), and we should travel at a safe speed that won’t damage the surface.

From there (after a brief glitch in the otherwise excellent drop-off system that ensures nobody gets left behind), we rode to a large open space for advice on the basics of trail riding.

Tony explained – using a customer’s BMW R1200GS – that when riding on byways you should forget much of what you know about road riding: When sat down, you should keep your elbows high and your body braced, rather than tucked and almost slumped over the bars as you might on a sportsbike. And while it seems obvious, if you see a rock, ride around it, not over it; avoiding target fixation is just as important off road as it is on.

When standing up on the bike, keeping your knees slightly bent and your bum back a little allows you to absorb the bumps, and let the bike move, though you do still want to keep your body in line with the machine.

If your bike has removable rubber inserts on the pegs, pop them out as they get slippery when wet, then have your feet firmly planted with the heels pushed up against the edge of the pegs for more stability.

When cornering, it’s easiest to sit back down again, with your elbows slightly raised and your inside leg out straight, about 45° to the bike and roughly in line with the front spindle. This will give you support as you tip into a corner – if the bike does slide a little, you can keep it upright with your leg in this position.

Finally, when braking, keep everything progressive – no panicked grabs – and use about 70% rear braking and 30% front. You can load the front a surprising amount in the dirt, but you must build the power, rather than slamming it on… 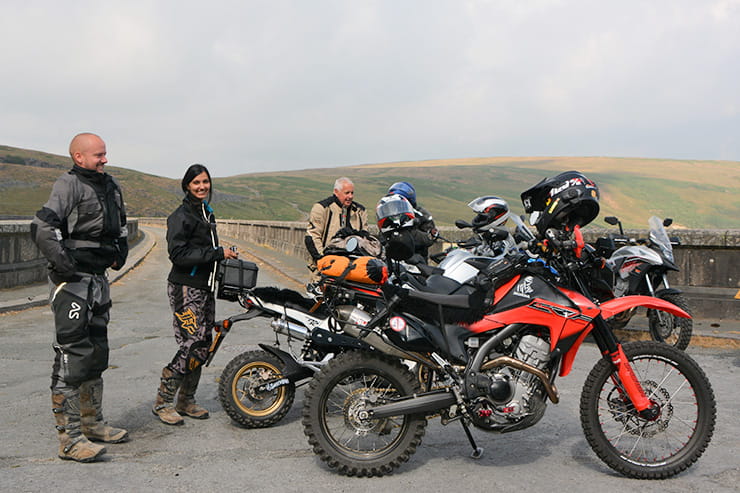 Anyone could ride the Bennetts Customer trail riding experience, but they did need to take a couple of things into account; firstly, as these are byways, any machine must be road registered, taxed and insured, with a valid MoT and a number plate.

Lighter bikes are much easier on trails, but three people were on big BMW adventure machines. Dirt-focussed tyres also help, though as the trails were dry when we went, road tyres weren’t too much of a problem if taking care on the loose sections.

You have to be prepared to drop your bike. Speeds are generally low, so damage is minimal – especially if you have crash protection – but any off-road riding carries a good chance of a tumble.

I rode my little Honda MSX125 (or Grom), as did another customer. There was also a Rally Raid CB500X, DRZ400, TTR250, CRF250, Himalayan, EXC400, R1150GS and two R1200GSs. I was the first to come off, just scuffing my exhaust, but two of the BMWs also go dropped – both riders though were still in very high spirits, and the sense of camaraderie was very clear. We all chipped in to help each other, and the two punctures of the trip (one down to an underinflated inner-tube on the TTR that got pinched in the rim) were quickly repaired by people helping out.

The only other drop was by Nick – a road racer who’d bought his KTM EXC400 just a few days before, and had never ridden off road. He took to it incredibly well, but did manage to launch himself into the long grass at one point. He thought it was hilarious as he dragged the bike out, kicked it over and shot off again…

The evening meals saw us all sharing stories and chatting over meals cooked together, or collected from the excellent takeaway, before settling down for the night in the bunkhouse. Bedding is supplied, and each room sleeps four to five people; you just needed to bring your own towels and toiletries. 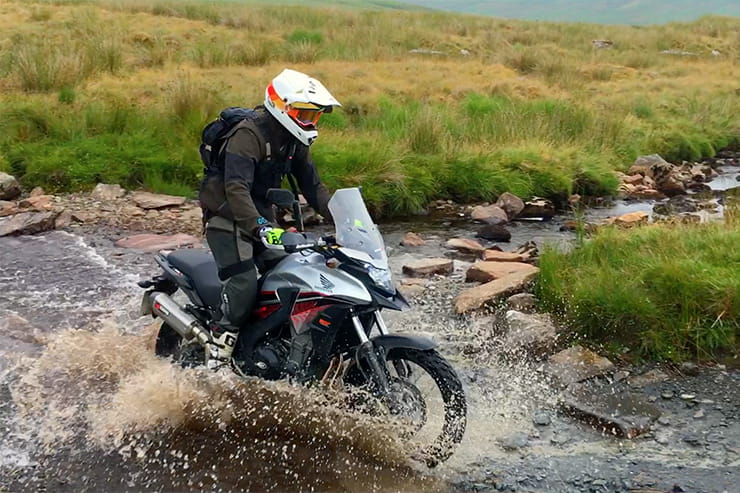 The atmosphere was definitely very social – I made some great friends and will be riding out with some of those I met again in the future.

I picked up some great tips from Nathan, Tony and other riders at the event, and genuinely enjoyed the trip, buzzing about it for several days after.

Riding off-road is different to road riding, but it also has a big impact on your level of bike control; being able to understand what your machine feels like when it loses traction is invaluable. When you’ve felt your motorcycle moving around in the mud, you’ll be a lot more confident on wet tarmac… 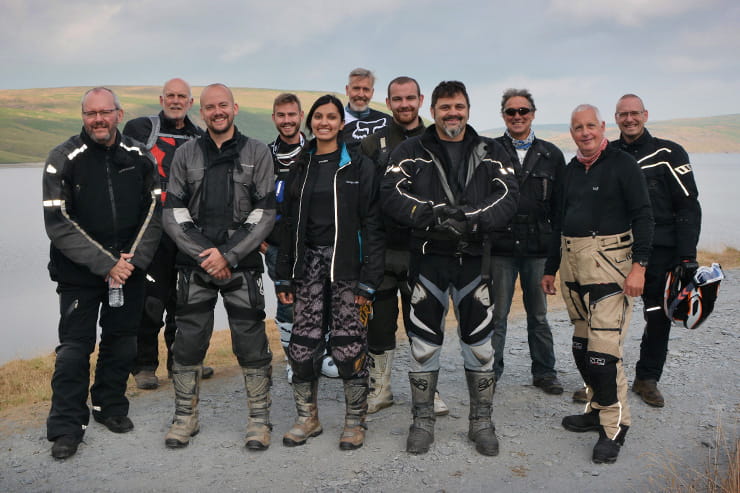 Of course, I work for Bennetts, so you’d expect me to enthuse about this experience. But when we do another, I’ll be pushing to be part of it once more.

Paul Gray from the West Midlands is a Bennetts customer who I met at the event – he was riding an R100GS, and while he’d taken a two-day BMW Off Road Skills course the year before, he was nervous about taking such a large bike off road. But he didn’t drop his bike, and would do it again; “I got fun, friendship, and loads of support and encouragement out of the Welsh Safari. Beside the skills coaching, there were also countless great views of the stunning mid Wales scenery.”

Brendan O’Hara did take a tumble on his R1200GS, but it didn’t spoil the trip for him; “I had a great time, and it has given me the impetus to get a bit more off-road experience on a trail ride in Surrey next weekend (I’ll be using their bike though).

“All in all I was a bit apprehensive at first about what the weekend would entail, and was ready to drop out if I felt it would be a bit too much for my capability and given the size of my big lump of a GS. But I had a great time with good company, and was pleasantly surprised at how well the GS manged the trails, albeit on its side for a brief time. So thank you for the opportunity to get some off-road experience in a fabulous setting with a good bunch of people.”

Brendan’s only criticism of the event was that he’d have liked to have had the chance to all get to the pub, and maybe have some food ready when we got back from the riding.

Husband and wife riders Philip Dorman and Kunjal Dodhia took their Honda CRF250M and Honda MSX125. “We met a lot of like-minded people,” says KJ. “It’s was very refreshing and motivating, being a great introduction to off-road riding that really built our confidence. We’d love to do it again.”