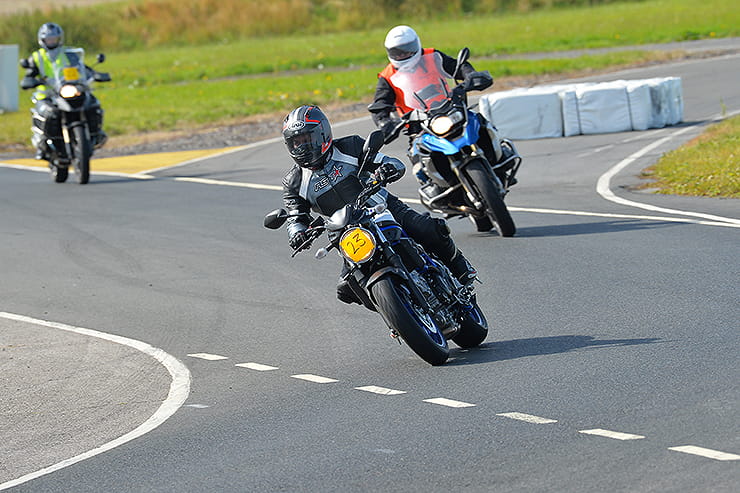 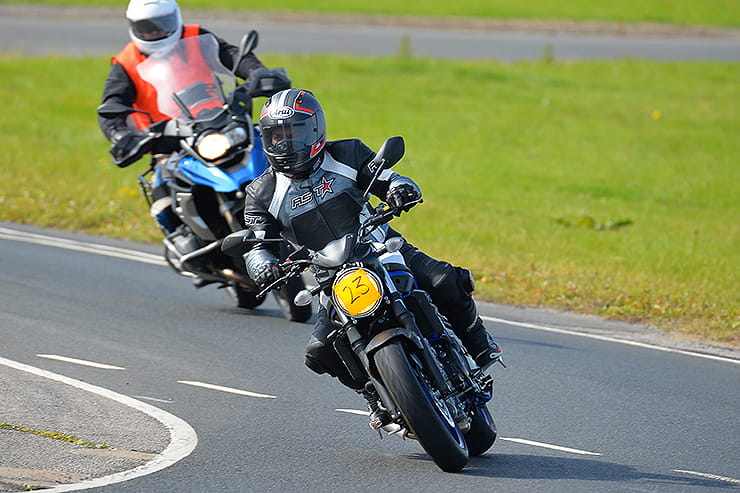 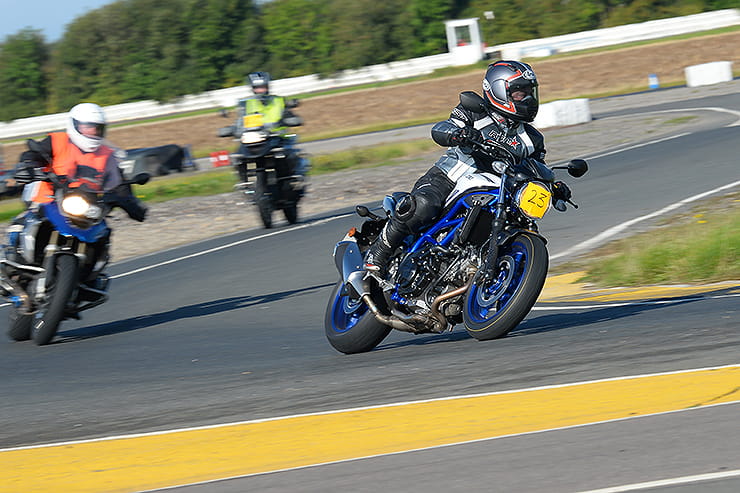 When I learned to ride, back in 1996, I spent a week on a Yamaha SR125, pottering around Peterborough, rarely exceeding 40mph. At the end of the process (at the second time of asking) I was handed a nice crisp certificate that declared that I could officially 'ride a motorbike'.

The chasm between that simple statement and the reality of riding a powerful and relatively heavy modern bike is vast, and one that I have been trying my hardest to cross in the twenty-odd years since.

If truth be known, we could all probably do with more training after passing our tests, but we seem reluctant to admit it, and even more reluctant to do something about it. This where Rapid Training comes in with its BikeMaster training programme. 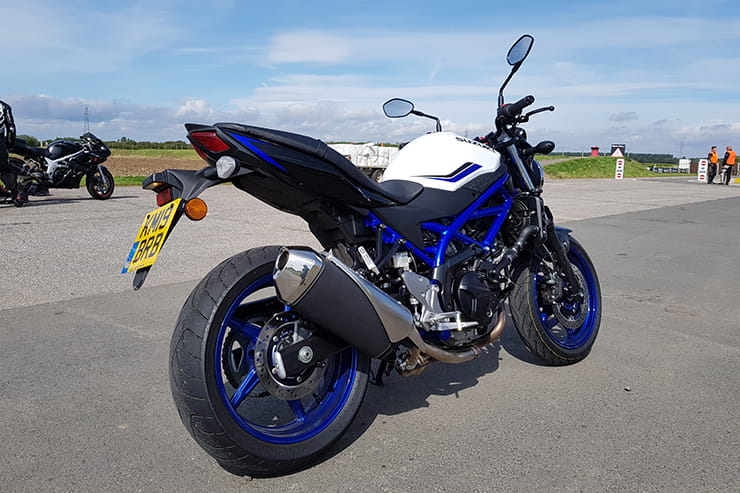 My steed for the day - Suzuki's excellent SV650

Who is Rapid Training?

Formed in 1997, Rapid Training's aim is to deliver the most advanced road rider training available, but what makes the company truly stand out from the crowd is that all its trainers hold Police Class 1 qualifications (many passing best in class), and the majority are also RAC/ACU, RoSPA or IAM examiners. All Rapid Training's instructors are passionate about bikes and riding, but also keen to push their own skills to the absolute limit.

The BikeMaster programme takes the best aspects of RoSPA, IAM and Police 'Roadcraft' techniques and delivers them in a way that helps riders understand, not only the correct way to implement the practices, but also the principles, theories and physics behind the techniques. While the course is focused on road riding, many of the aspects are best practiced in the safe and repeatable environment that a track affords. Recognising this, each level of the BikeMaster course includes track time at the Blyton Park Race Track near Gainsborough, Lincolnshire.

BikeMaster is quoted as the most comprehensive and advanced rider training programme in the UK, and comprises three levels:

This is amde up of four days of training – three on road, and one on track, which don't need to be consecutive - and is designed to embed the core skills of safe, precision, performance riding. At the end of this level the rider will be able to demonstrate a high standard of safe, systematic, confident riding.

Another four days of training, again including one day on track. Level 2 takes the basic skills learned and honed in Level One, and allows the rider to step forward in confidence, finesse and ability to make fast, safe progress. On completion of level 2, the rider with be able to demonstrate smooth control while achieving impressive progress.

'mastery of the machine'. Completion of level three is only achieved by demonstrating an outstanding level of competence on both track and road. 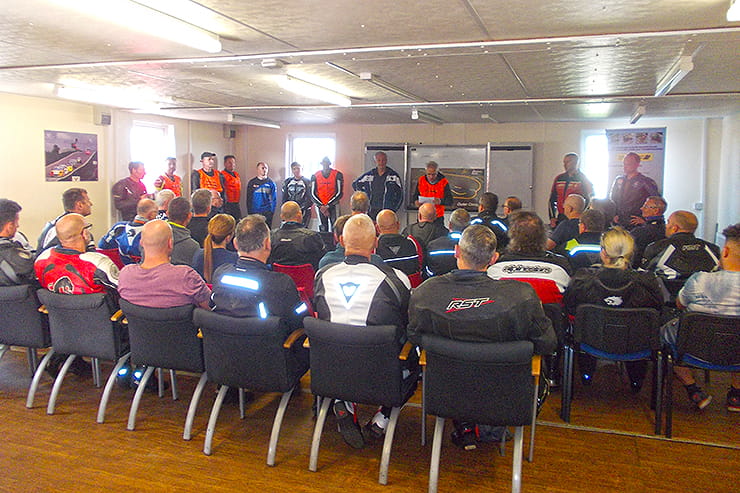 In simple terms, the course is aimed at anyone who wants to improve their riding. On the day I attended, there was a wide variety of riders spanning all levels of experience, and on all kinds of bikes; from a BMW R1100GS to a Ducati Panigale. While many were treating the course as a way of eliminating some bad habits developed over decades of riding, one student had passed his test just six-months previously and was laying down the foundations of good riding technique right from the start.

What you can expect from the day?

I attended the Level 1 track session, with plans to arrange my road riding days later in the year.

After the usual process of signing on, health and safety briefings and introductions by the British Superbike School, with whom the track is shared, we were introduced to our Rapid Training instructors for the day.

The opening session concentrates on track familiarisation and allows you to follow the instructor (two students per instructor) around the course, learning the direction and severity of each of the corners and the best lines to take. At first sight, Blyton looks a simple course, but within a few laps you will soon realise that it has a good selection of corners, chicanes and straights. Best of all for the novice track day rider (i.e. me), there's lots of run off and great visibility, so you soon feel comfortable and any initial butterflies soon settle. After three or four laps following the instructor, you then take turns to lead, allowing the instructor to observe your riding and give feedback on areas to work on during the day.

Session two addresses the first key aspect of riding - turning the bike. For me, this is where the course excels, as this was the first time that counter steering was truly explained in a way that not only gave me the necessary understanding of the physical process, but also highlighted what I was doing wrong and why that was hindering my riding. All training is delivered in a relaxed and friendly way with ample time to ask questions, clarify any points and discuss any areas of concern, before putting the lesson into practice on track.

Session three provides a natural progression from cornering and concentrates on observation skills – looking towards the apex at turn in, looking through the turn and keeping your line of sight up at all times. Again, there are practical exercises during the briefing and thorough explanation of the principles and importance of the key points of each session.

After a break for a much-needed lunch (Blyton Track has an excellent café with all food being made to order), session four concentrates on throttle control and its use to settle the bike on turn in and bring the bike upright on exit.

In all four sessions, track time is relaxed and run at a pace that is comfortable to all students. You are advised to ride at around 60-70% of capacity – allowing plenty spare to take on board what's been taught and put it into practice, without being rushed or panicked.

In the final session of the day, you bring together what you've learned and introduce some gentle braking and gear changes – up until this point, all sessions were run in a single gear. The aim is to put together smooth flowing laps with a consistent yet comfortable speed and show ability to repeatably place the bike exactly where you want, and need, it. 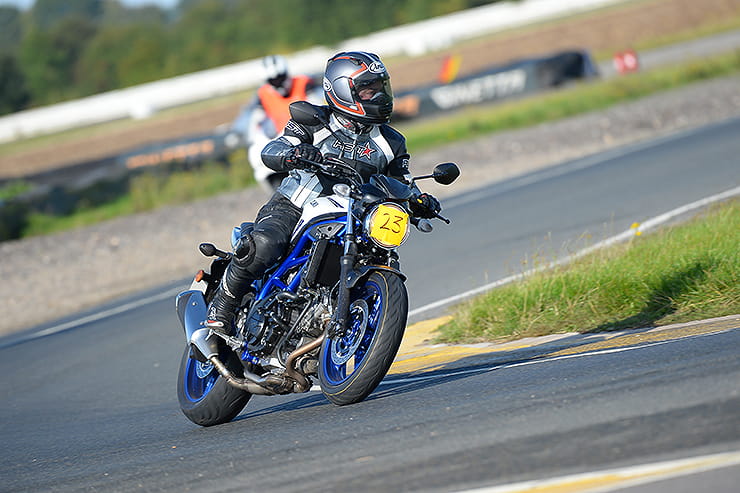 The main benefit of being on track is the chance to practice each corner in a consistent, repeatable and safe environment. There's a lot to take in during the day, and the chance to practice on a reliably good surface, with little or no distractions, ensures that your concentration is fully on the task in hand.

The track sessions are not about speed, in fact if the instructors feel that any student is pushing on beyond comfortable limits, they will make it known and request that they slow down a bit (don’t ask me how I know!)

Finally, and just as importantly, it's good fun. For anyone who is contemplating a track day, but finds the whole experience a bit daunting, this provides an excellent introduction to riding on a circuit, while keeping the whole day safe and enjoyable. 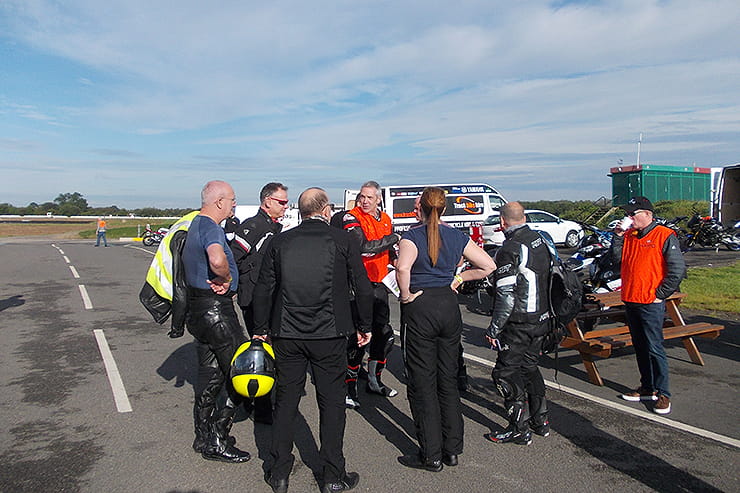 The Rapid Training briefings are informal and very hands-on

I attended the day on a Suzuki SV650, which turned out to be a perfect tool for what was in store. The bike was more than happy to spend 90% of its time in 4th gear, with enough low-down grunt to drive out of corners and a free revving engine for the straights. The brakes are firm, without being snatchy and the riding position was just right to allow a relaxed, yet alert, body position.

I found the mix of hands-on briefing, combined with some technical explanation exactly what I needed and even by the second session of the day, there was a noticeable improvement in my riding, both in terms of technical competence and – most importantly – in enjoyment and comfort.

With the implementation of some basic drills, my riding had been transformed from wrestling the bike around the corners to an almost zen-like calm of counter steering and throttle response. Without even trying, my speed had increased significantly, and yet, by the end of session I felt relaxed and calm.

This level of improvement continued throughout the day and by session five, I was able to lap the track in a consistently calm, confident and most of all, safe manner. As a track virgin, this was an absolute revelation, topped only by being advised by Instructor Kevin Harper that he would assess me as a middle-intermediate on a track day. What a result!

Why should I take more training?

Aside from the obvious safety aspects, being able to control the bike with precision and finesse and the satisfaction that comes with that control is indescribable. Surely, we should all aspire to be the very best we can at riding in all conditions. While undertaking additional training such as BikeMaster may not pay immediate financial benefits in terms of, for example, reduced insurance premiums, the long-term advantage of being a safer, more considerate rider pays huge benefits in the longer term through increased enjoyment and satisfaction.

How much does it cost?

The BikeMaster course costs £875 per level, or £1795 if you undertake the eight day fast-track programme. While this may initially seem a lot, it should be considered an investment in your biking career. Many bikers would be quite happy to spend the best part of a thousand pounds on a loud exhaust or a host of carbon goodies but would baulk at the thought of spending a similar amount on learning to use the bike to the best of their ability.

It will take considerable time and effort to achieve a Level 3 Certification but doing so means that you've demonstrated total control of your bike in all conditions. Shouldn't we aspire to being BikeMasters? 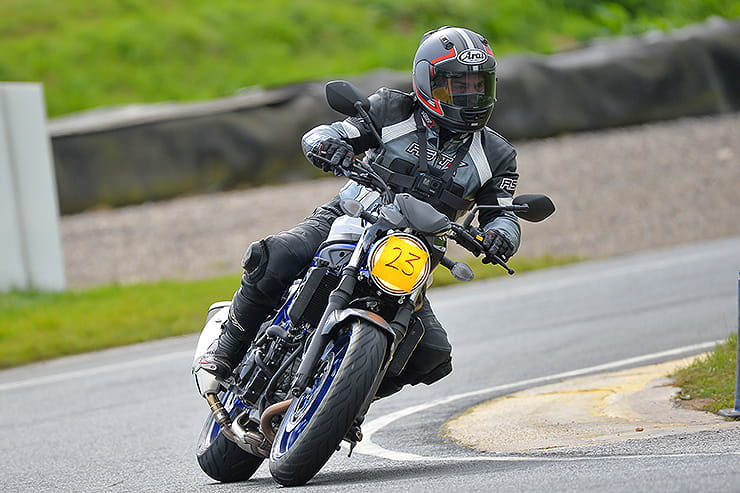