Tested: I Want to Wheelie School 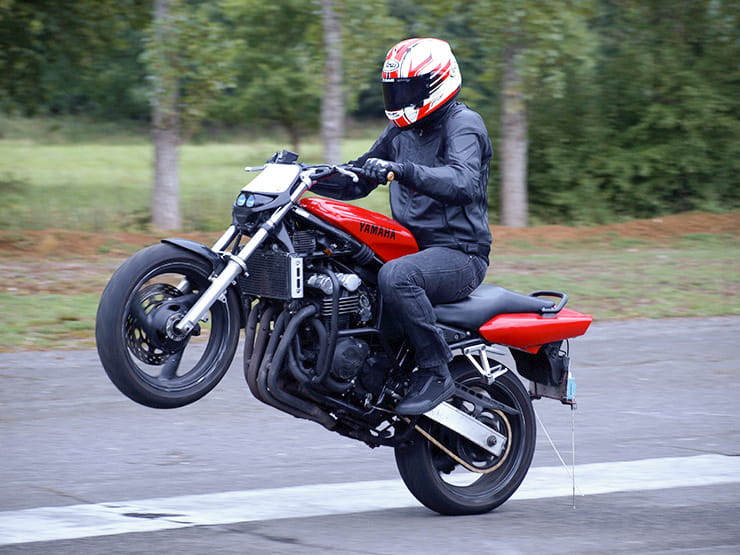 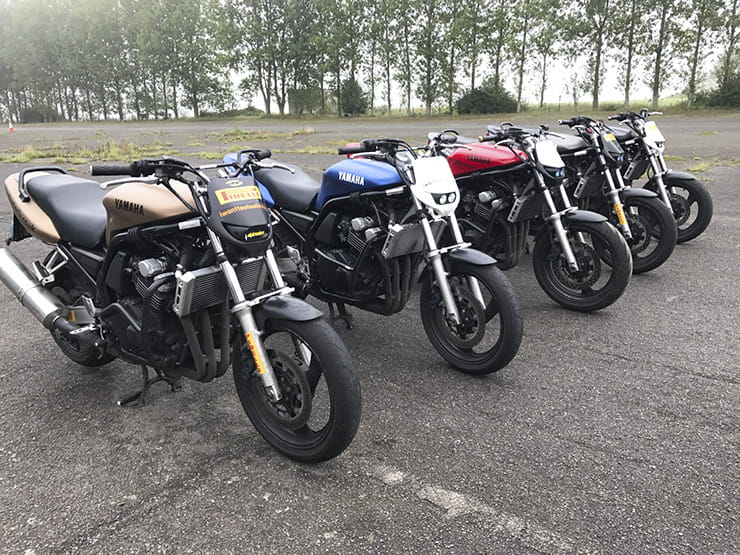 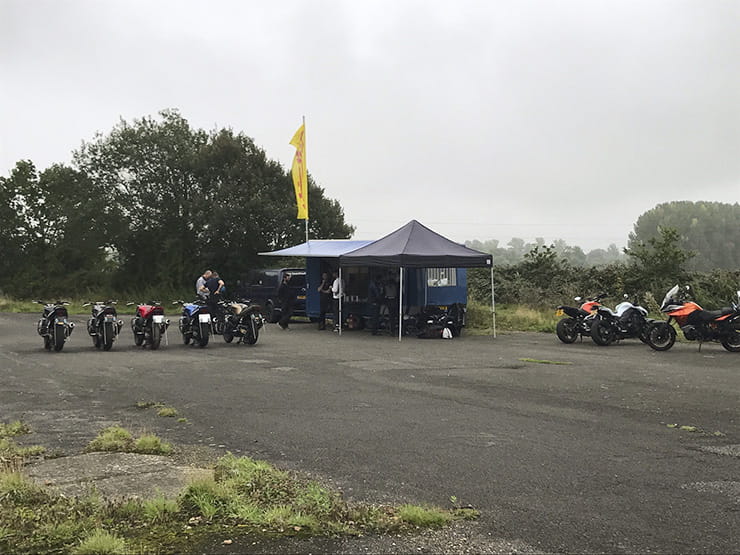 When you're told to ride around an airfield all day in first gear how enjoyable can it be?

Well, as it turns out, very. Eight keen wheelie students including me lined up on the edge of Finmere Airfield in Buckinghamshire, where the ‘I want to wheelie’ school has been operating since 2001. We’re stood in pairs behind four adapted Yamaha Fazers awaiting further instructions.

But what is the aim of the day? To hoist the front wheel as high in the air as we can in a bid to gain maximum man points? To gracefully land it without crushing one’s wedding tackle? Or, to learn the art of balance on a 190kg bike?

Probably all of the above if we’re being honest but that’s not what Evan and Jody – the two twin-like instructors – want us to learn. Evan’s a stunt-rider while Jody is the adventure man and both have a wealth of experience. Evan even ran through his repertoire during the lunch break as a neat and unexpected bonus.

There are three main methods of achieving the wheelie; clutch, power and weight transfer. All are tricky to get right and to stay in control for more than a few seconds unless you’re well versed and practice a lot. With the quantity of brake horses packed into the mass of today’s super nakeds, super adventures and such like, the power wheelie in theory should be easy to achieve but not master. On a closed or private road or track, of course. Twist the throttle and, depending on the electronic settings the front will come up. Simple. It works on crests in the roads too. 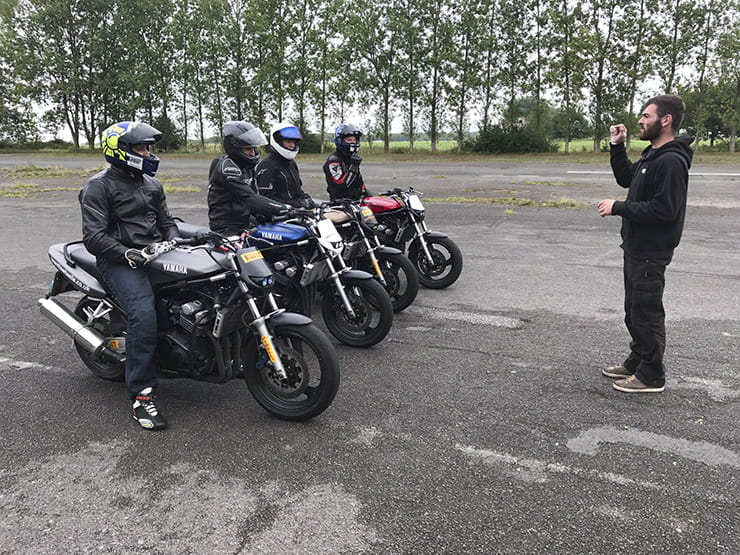 But that’s not what we were here to do. This school’s curriculum is all about weight transfer - a technique that in this instance includes its own safety net. That of two sticks of different lengths attached to the number plate holder that act in stages – the longer cuts power in half to slow the bike down on the way up while the shorter stick cuts full power for when you get too high. The sticks are adjustable and as your skill level with throttle feathering progresses thought the day, Evan and Jody shorten the sticks. In theory, it’s almost impossible to flip the Fazer.

The objective of the weight transfer technique is best analysed as like sitting in a wheelchair and trying to find the balance point when tipping back onto the main wheels – fine adjustments are required rather than great big movements. Easier said than done.

Five (usually, today only four were required) of Yamaha’s trusty FZS600 Fazer’s (pre-2004) running regular road pressure in the front Pirelli Diablo Corsa III tyre but less in the rear. They’ve been stripped of their headlight, have one less calliper making the front brake lever like a piece of wood though it’s rarely required. Renthal off-road bars add strength because the original bars are “like cheese”, according to Evan. 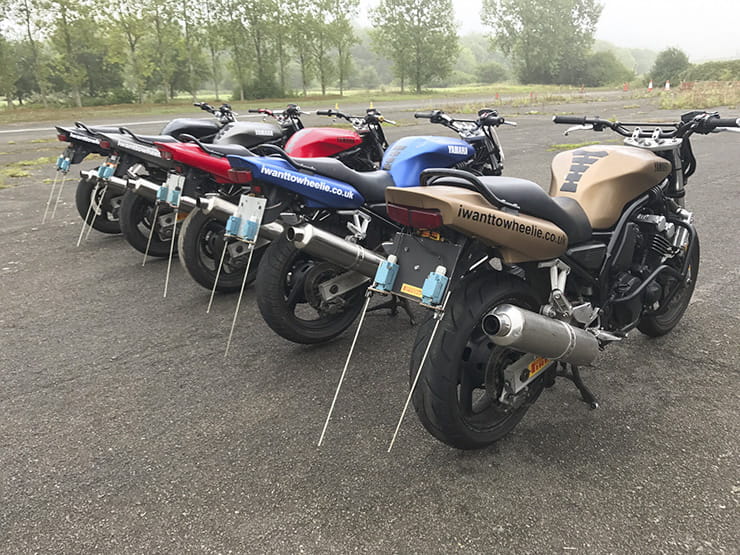 Sticks on bikes, at their beginner positions

The bikes are simple to operate and there’s not even any speedo distraction.

Then the pièce de résistance is the anti-flip ‘trip system’; two number plate-mounted sticks, one longer than the other mentioned earlier.

In the corner of Finmere Aerodrome off the A421/A4221 roundabout, near Buckingham. Bumpy, patchy and, in places, overgrown except the bit of all important strip of concrete where your skills are honed.

Tea and coffee are provided by the boys and their trailer while the bathroom facilities are two-fold – a grim portacabin behind the trees. Or the trees themselves.

Take your own pack-up or head to the local service station. Evan then grabbed his converted 636 Kawasaki complete with home-made crash protection bars and 62-teeth rear sprocket to demo his range of tricks under the thinly veiled excuse of showing us clutch control! After a round of applause, it’s back to work.

Who? The test team

I really wanted to learn a technique that could be transferable to all bikes and eventually (with practice) lead to being in control of a proper, consistent and lengthy wheelie with finesse rather than pooping myself anytime the front pops up, usually accidentally. After all, shutting the throttle rather than risk sliding off the back is much more attractive.

I’ve listened to so much advice about covering the rear brake, flicking the clutch and really wanting to wheelie to make it happen but this was a quiet and unassuming school ready to teach a technique that offers the feeling of being able to wheelie, in control, every time.

Within minutes of the initial brief the first four riders were circulating around the 250m near-rectangular track getting used to the controls and the feeling of the bike, all in first gear remember. Plus, getting familiar with cone placements for they’d become important soon enough. After a few laps the first lesson moved on to be at jogging pace at the first cone, then crack the throttle wide open at the second. Several laps later and the movement developed into shutting off and on again at the third cone (15m further on) to compress the front suspension before opening the throttle once again less than a second later. Hey presto, a wheelie! Less than 15 minutes after getting on the bike.

The science got more technical as body positioning and throttle feathering techniques were introduced but essentially, I’d already met with the lovely, winning feeling of a proper wheelie, that could be achieved time and time again. Or so I thought.

The sticks were adjusted to allow a bit more height and the adrenaline was pumping as the front wheel was away from the ground for longer or for a greater distance each time. By noon, Jimmy was given the naughty step treatment and told he was getting too high. Nyan had the same issues and resorted to counting the parts only a gentleman should need to count. 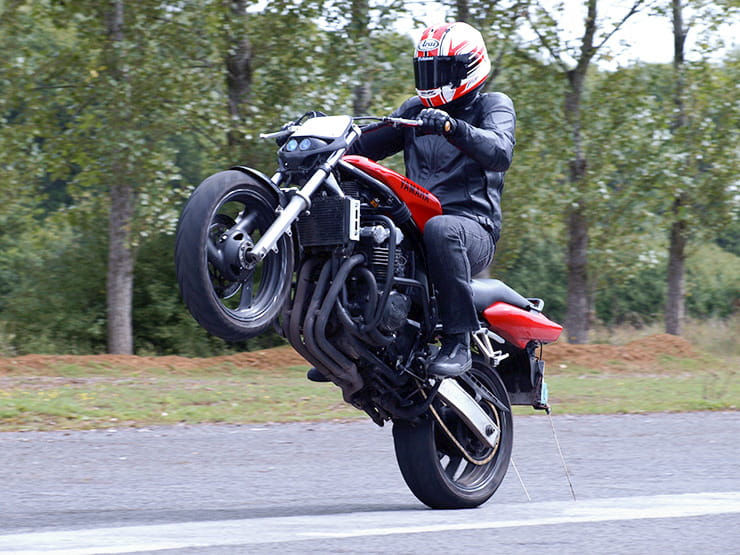 Not the ideal height to carry the wheelie over the distance

Nyan said, “With each step you get more comfortable. The feather is key, once you're concentrating on that your mind goes into automation. It's about mastering your fear too. When we ride, our fear levels are already quite high so to add a new-found level of adrenaline gives you that final buzz.”

Jimmy attempted to analyse it like a golf swing. “There are such fine margins between ‘hoiking a minger’ (a complimentary phrase for an excellent wheelie, I’m told) and getting no air.”

“Like a golf swing. If you happen to crack a mean drive you parade down the fairway, chest pumped and head held high. Then you top the next one or it goes in the trees and you a) don’t understand the difference between that one and the last one, and b) you’re bought back down to earth.”

Back on it after lunch after the excitable tales of how we were all becoming wheelie gods had calmed and the technique became a little easier. The course offers heaps of practice time with which to fine tune the feathering attempts as the sticks are adjusted once more.

While the height was getting there the distance wasn't and that's through lack of feathering, or blipping as some like to call it. By being too aggressive on the throttle resulted in the front coming up too quickly leaving no room for effective feathering. The fast collection of actions were all to be completed in seconds otherwise the bike was keeping both wheels planted or heading skywards too quickly - getting too high means the sticks catch and power is cut. The art of a good (well, what the instructors wish to teach you) of wheelie is not necessarily height, it's control by feathering half way up with a semi-open throttle.

‘Vertical’ Nyan who had plenty of height but not much distance…until mid-afternoon when things started to click, said, “I felt much more comfortable with the bike coming up. The initial scare was gone so I could concentrate on getting it under control.”

Gareth believed the school was “confidence inspiring with the trigger system. There's not too big a target to hit, so I always felt at a safe level and never out of my comfort level. The guys are really approachable and polite. The amenities are a bit basic but there’s tea and coffee. I felt completely safe and you’d have totally out of shape to crash it.”

He went on to question why covering the rear brake was never required, practiced or talked about and, despite getting some fine wheelie control toward the end of the day, said of the technique where the sticks will save you, “there’s no way I’m going to try it on my 1190.”

Jimmy ‘point-to-the-stars’ said, “It’s brilliant! A great way of building your confidence and getting the front wheel in the air instead of using the clutch or gears. The sticks on the rear gave you the confidence to give you the initial loft and there’s plenty of space and opportunity to practice. Once you've processed the info and technique it gives you plenty of confidence.” 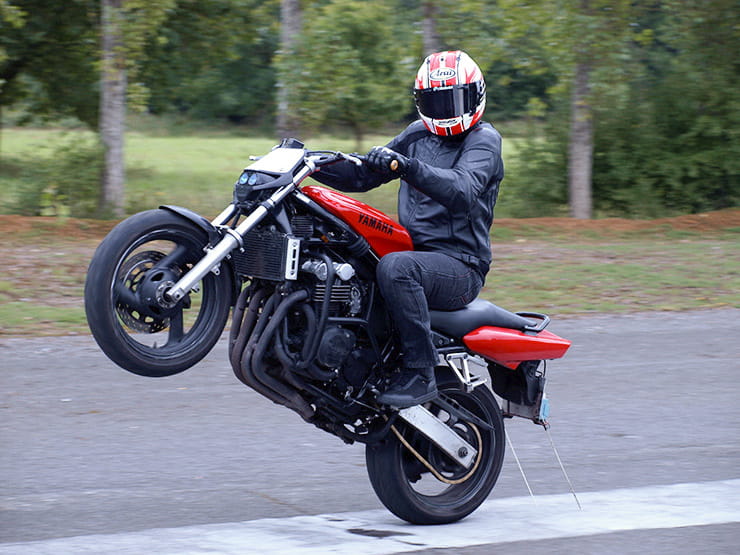 I wondered if the boys could offer an alternate course or market it as a ‘stage 2’ by introducing the clutch technique. I also initially thought there’d be room to condense it into half a day but then again, the more time to practice and fine tune, the more likely you are to find and then repeat the same timing, throttle input and blipping for a completely awesome distance wheelie.

Could the same technique be transferred to a road bike? Well, that depends on what you ride. For example, do not attempt if you have a Tuono V4 1100, SuperDuke 1290 or MT-10, especially in first gear. You will hurt yourself and your bank balance. I’d imagine an MT-07, Z900 or SV650 would make a sensible test mule. The school offers a great fun day out with your mates, you’ll end up pulling some big and then long wheelies which look ace on camera. The skill level to ‘complete’ the objective isn’t huge but to master it, is.

Evan and Jody guarantee to have you wheelie at least 30 metres or you’re invited back free of charge.

*UPDATE - A second course has been developed which aims to get you using the rear brake for controlling the bike in a higher wheelie and relying less on the sticks. Each time you return the price decreases by £25 and with availability on several dates through September and October it's worth checking the website for more details: http://iwanttowheelie.co.uk/news-and-dates/