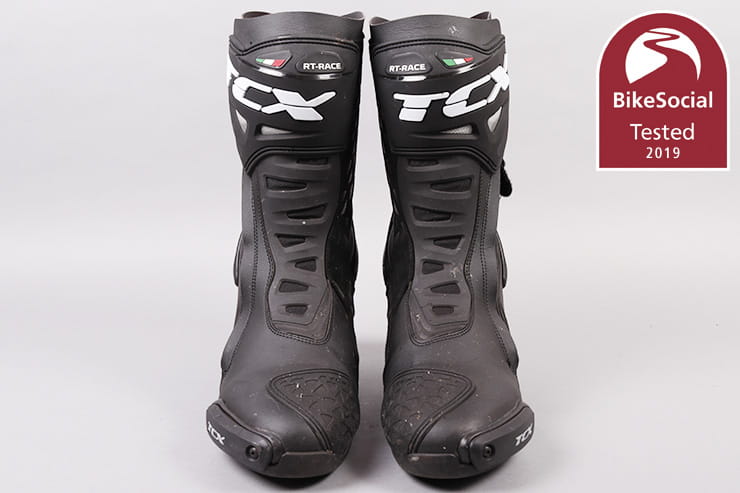 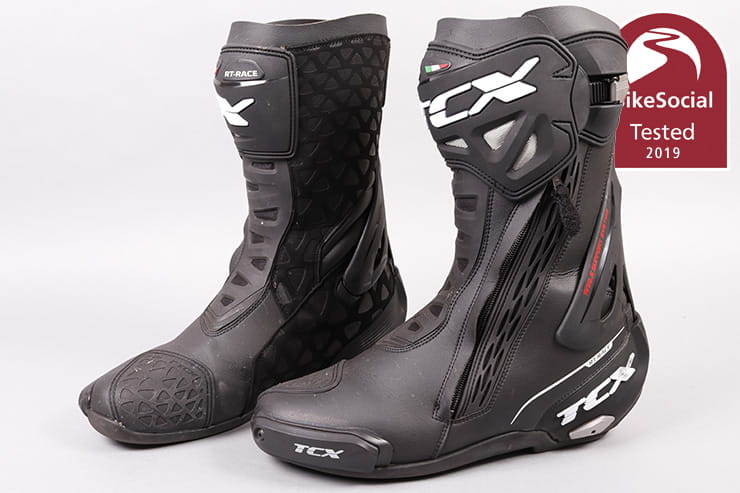 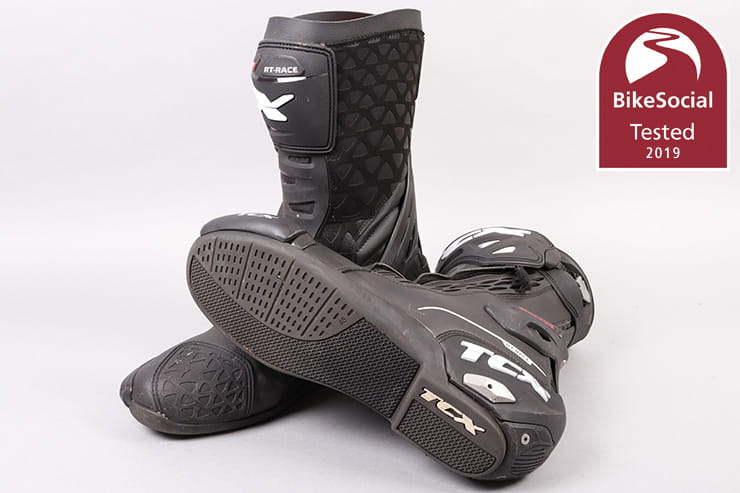 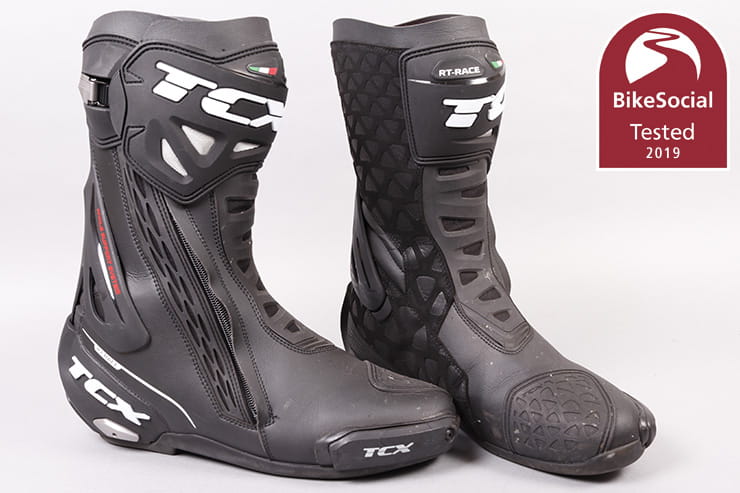 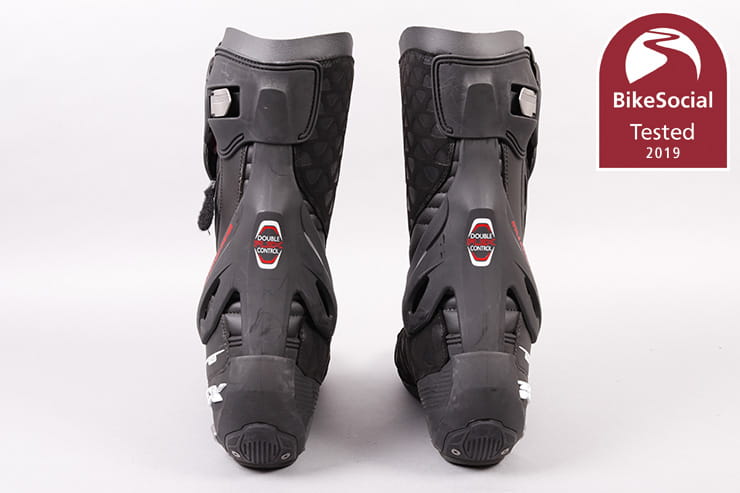 Good race boots will give enough feel and freedom of movement to properly control a sportsbike, while offering the support and security needed in the event of a high-speed track crash. I’ve been using the TCX RT-Race boots on review here with a Honda CBR650R, Yamaha MT-10 and other sports-focussed machines on and off for the past year…

The TCX RT-Race have a synthetic upper with plastic moulded panels, along with a slightly grippier section on the inside panels (which also acts as a heat guard). The sole’s rubber and offers good grip on smoother tarmac surfaces.

The plastic toe-slider is replaceable, as is the small magnesium alloy one on the side of the heel, and the larger plastic one on the rear.

The boots feature a ‘DFC Double Flex Control System’ – this restricts forward movement (rotating around the ankle) to 14°, and rearward movement to 13°. All this support means that, in a crash, the movement of your foot is controlled; particularly important on track, where a high-side is more likely than on the road. Of course, there’s only so much that the plastic braces can achieve, but it’s all additional protection to your bones, if not quite as solid as some of the top-end kit; where they’re most effective is in reducing the ability of your leg to rotate too far back around the ankle.

Yes, the plastic does squeak a little, but far from the extent that other race boots I’ve worn have done. 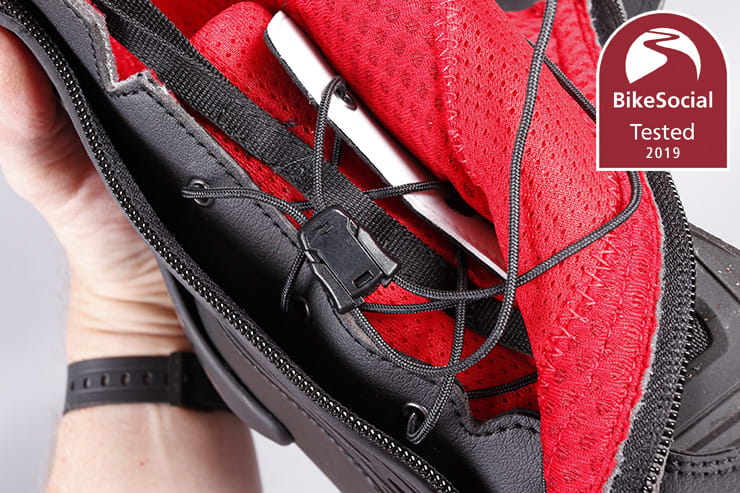 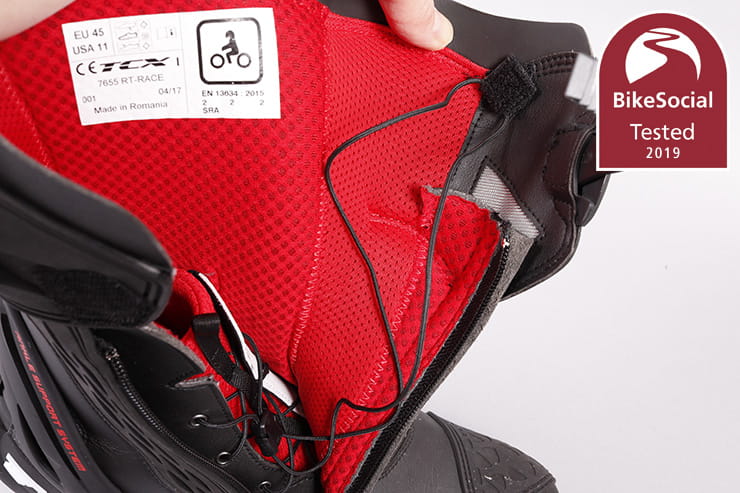 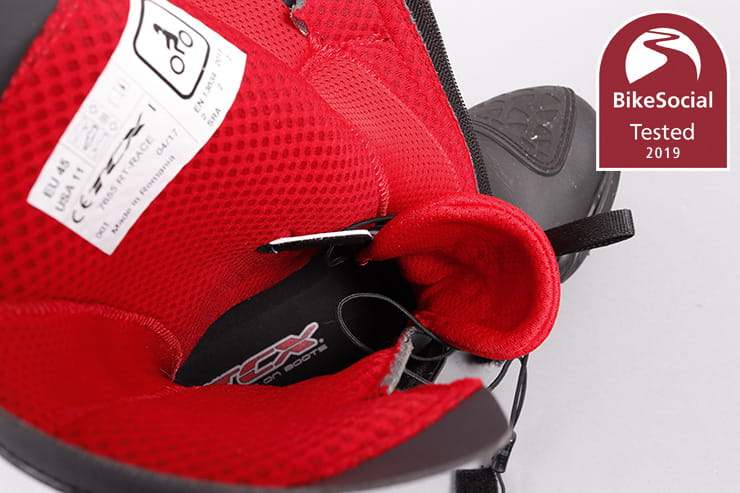 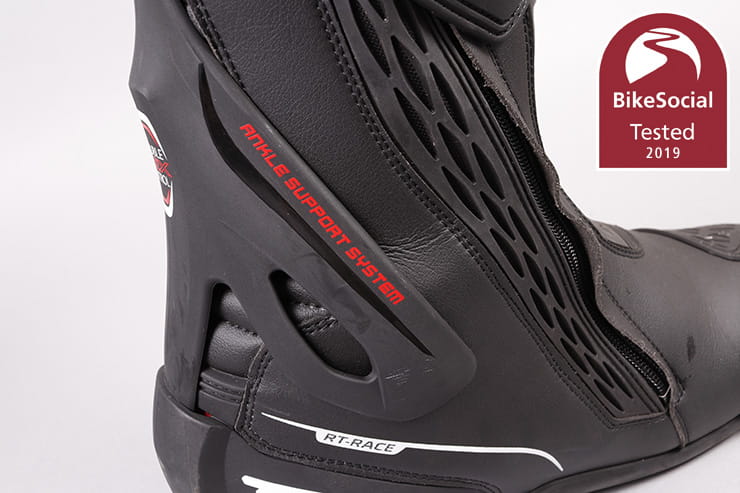 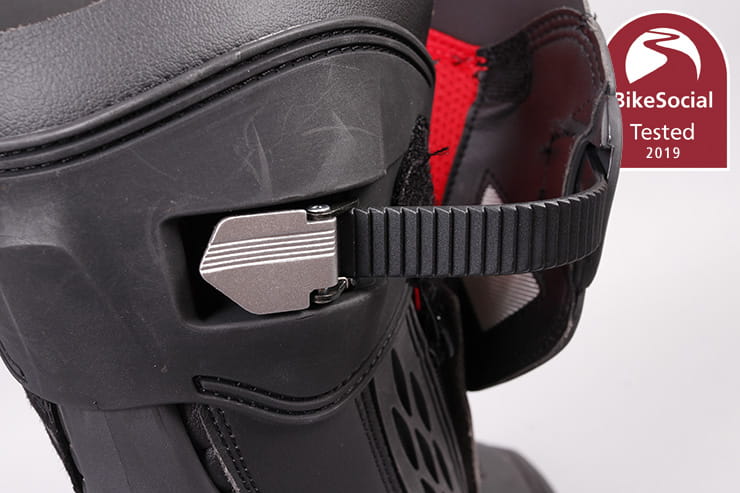 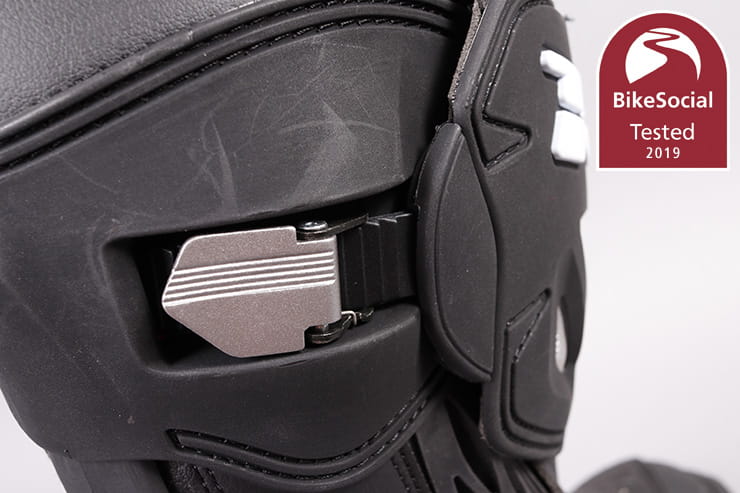 Fastening on the TCX RT-Races is excellent – your foot slips snugly into a well-shaped inner with a separate tongue and lace loops built in; it’s like a hybrid of the race boots that have a completely separate inner boot.

Once your foot’s in, pull the laces tight and slide the plastic toggle down to secure them. The end of the lace has a Velcro patch that can then secure it out of the way at the top of the inside of the boot.

The side zip goes most of the way to the top, again with a Velcro tab to keep it tucked out of the way, then a ratchet strap closes the top of the boot against your leathers. It’s a secure system that hugs my feet well.

As with all of TCX’s boots, the RT-Races are certified to EN13634:2015. In this case, they’ve achieved Level two (the highest) for impact abrasion resistance (≥12 seconds at 18mph on a 60 grit belt), impact cut resistance (≤15mm penetration of a blade at 6mph) and transverse rigidity (≥1.5kM to deform the footbed by 20mm), which simulates the foot being trapped under the bike – you can try boots for yourself by laying them on their side then standing on the sole; if the sole folds over, they’re not really suitable for use on a bike. 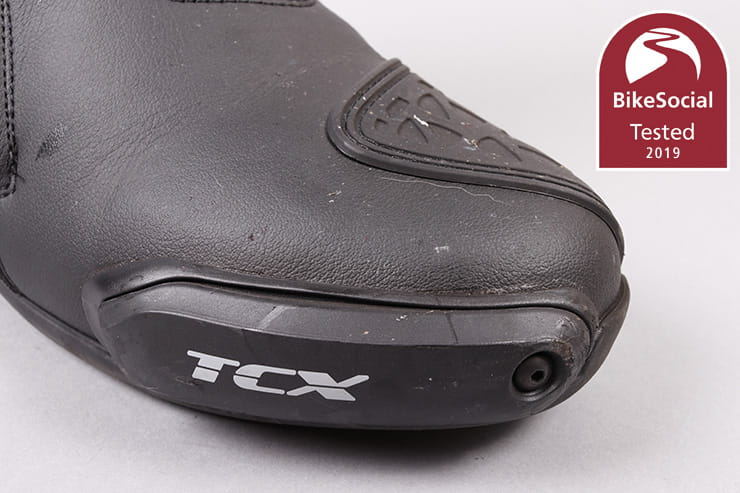 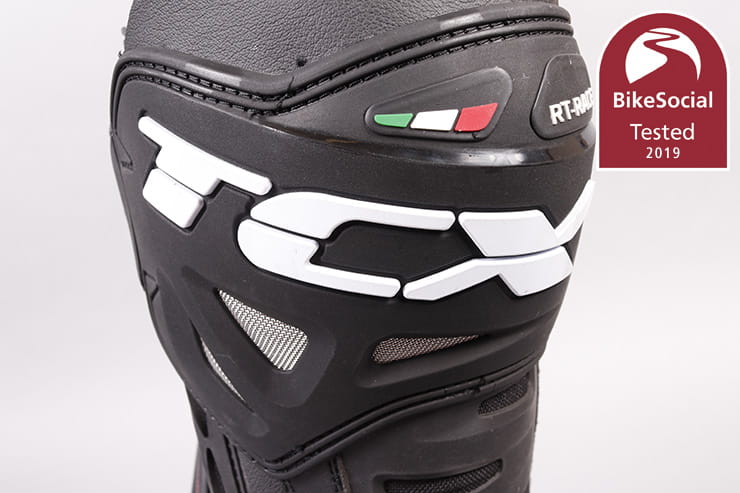 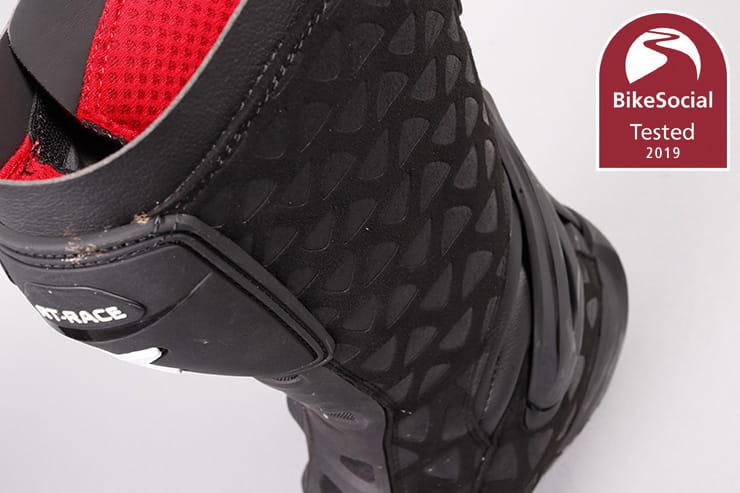 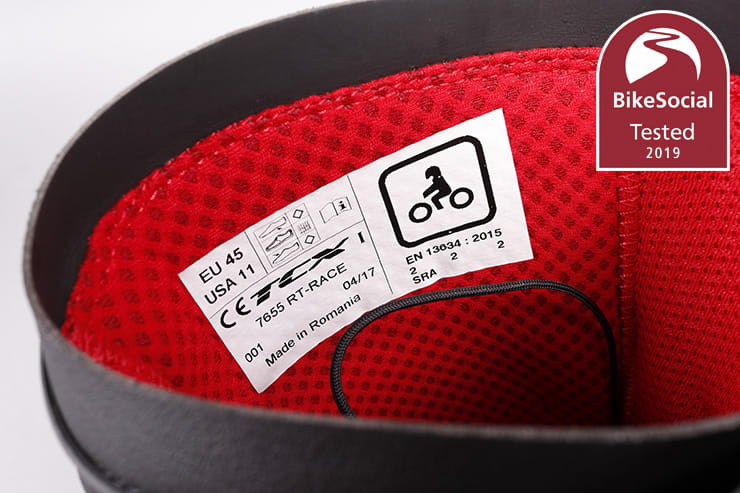 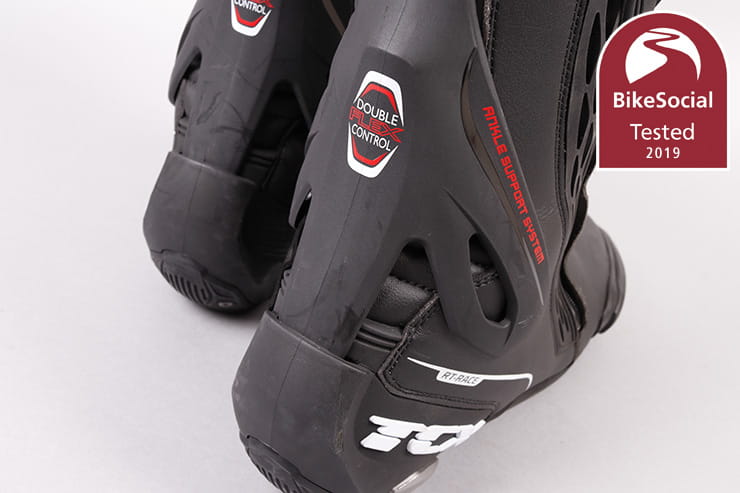 TCX makes some of the most comfortable boots I’ve ever worn – and not just in motorcycling; I’ve walked 10 miles in the TCX X-Blends without any problems. But these RT-Races are nothing like them.

A sportsbike boot needs to be very supportive, and it also needs a thin sole to give you the best feel through the pegs. The RT-Race, despite that reinforced mid-sole, give great feedback – you can really feel a sportsbike’s metal pegs as you push on them, giving a lot of control on track. But that also means you have next-to no damping when walking around; a full day riding and walking around the paddock leaves me with really sore feet.

This isn’t unique to these boots, and many people will have less sensitive plates than me. The point is that, if you spend more time walking around than racing, or if your ride is on the road with stops at meets and cafés, think carefully before buying race boots.

On track, these are my first choice. But I can’t wait to take them off at the end of the day. 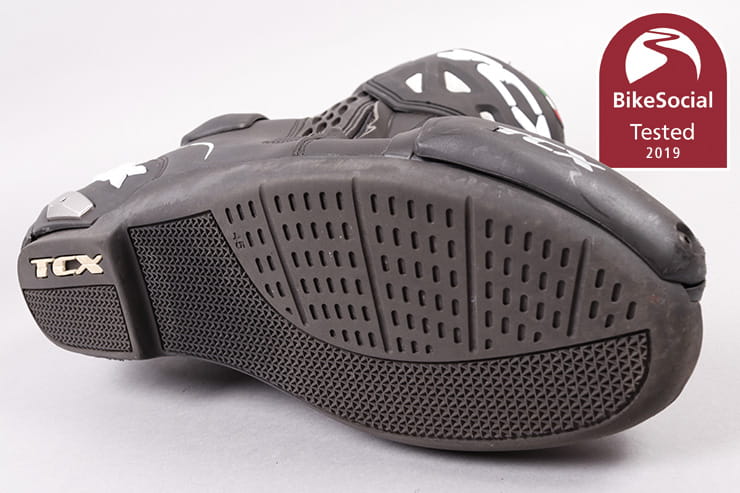 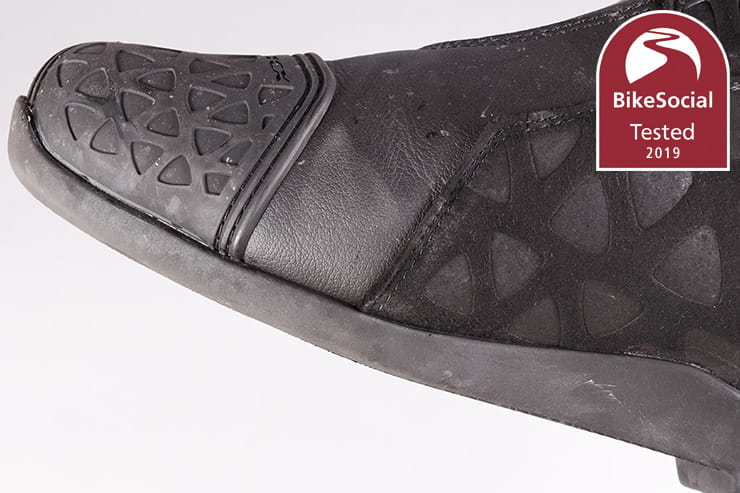 There’s a very fine and shallow tread on the soles – the last thing you want is blocks hooking up on the pegs – but they’re grippy enough on the tarmac you’ll most likely be walking around on; only if you’re hacking across muddy fields to get to the best spot at a race meet might you struggle.

These aren’t waterproof boots, though in a shower they’re not going to flood instantly. There is an ‘Air’ version available with a perforated upper, but for the UK, these are probably the best bet. If you do want waterproofing, the new TCX ST-Fighter GTX might be worth a look. 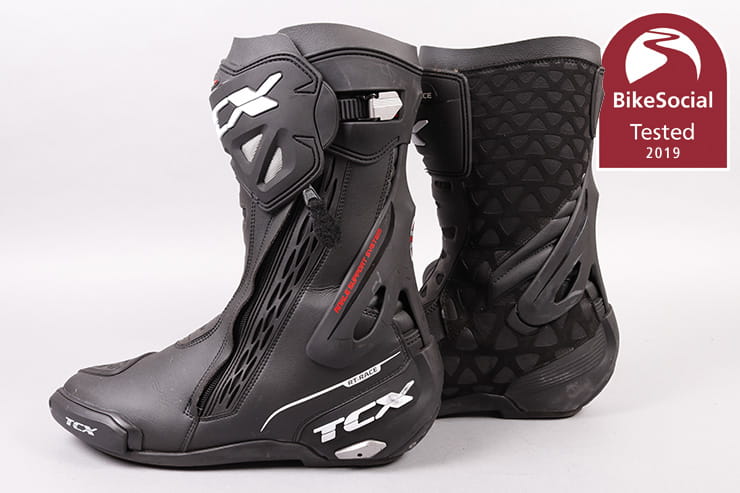 As race boots go, the TCX RT-Race boots offer good value and decent features for the money. They’ve got plenty of feel and, despite the braces on the sides and rear, I’ve not had a problem with them hooking up on the bike. They’re also compact enough that they don’t feel too bulky (though the proximity of the MT-10 pillion pegs is a problem with any boots).

For track riders the RT-Race are priced well, but do think carefully about where you’ll be riding – if you’re more road-focussed and spend a fair amount of time walking around in your bike kit, check out some slightly more touring-focussed footwear, or consider the new ST-Fighters, which we’ll be reviewing soon.