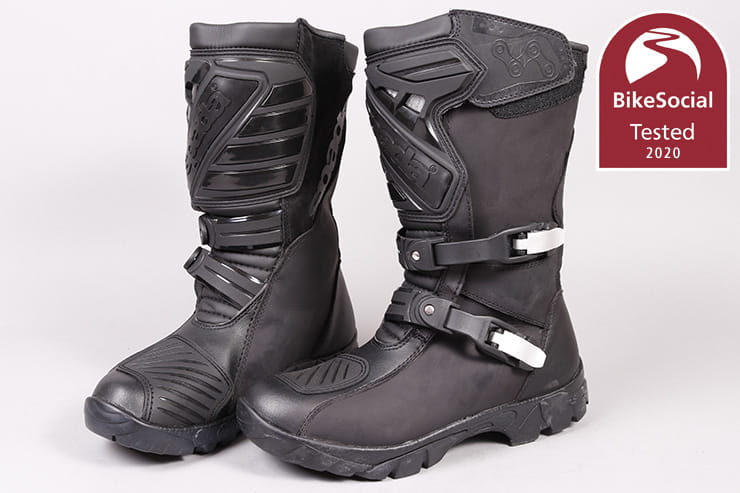 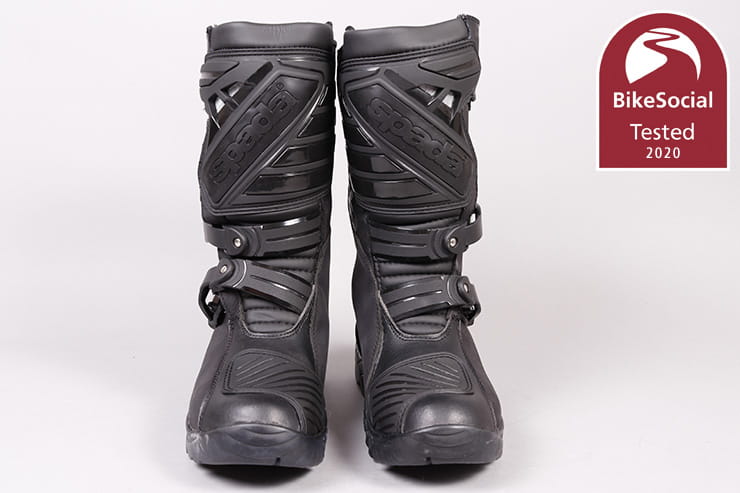 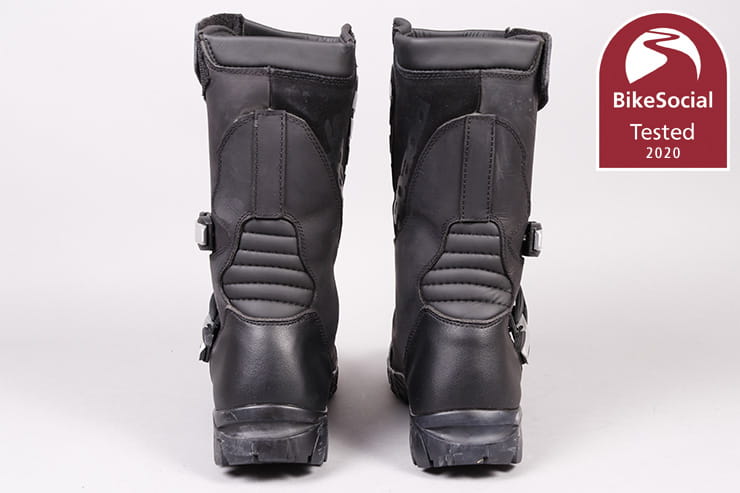 Jon Ashley is an all-year-round rider, owner of a 2018 BMW S1000R Sport, and a member of Bennetts Rewards. He’s spent the last few months testing the Spada Raider boots for us…

The Raider boots come in a design that sits somewhere between touring and adventure; while leaning towards the former, this is some robust footwear, with Spada’s take on a commando sole combined with more than a nod to the kind of fastening systems seen on more off-road-focussed motorcycle kit. Unlike motocross boots though, these are a lot more flexible, so much easier to get on with on the average road bike.

I’ve worn these while riding my BMW S1000R, which although not strictly a motorbike you’d categorise as an adventure machine, it is nonetheless flexible enough for the kind of remote back roads you find right in the heart of the countryside.

While this test comes at the peak of spring and into summer, the boots feel substantial enough for all weathers, with a solid 800 miles completed in both hot and dry, and the more traditional wet summer weather.

The extensive use of leather and nubuck is refreshing compared to the microfibre and other man-made materials used these days. The Raiders have some heft (0.98kg per boot), yet the accompanying thick sole is somehow built into footwear that remains easily within the touring category.

The internal footprint is quite narrow – which works for me – but riders with broader feet should check carefully. As with any kit, try these on before buying.

The heel and toe are reinforced, and the Spadas are fitted with a Hipora waterproof lining. 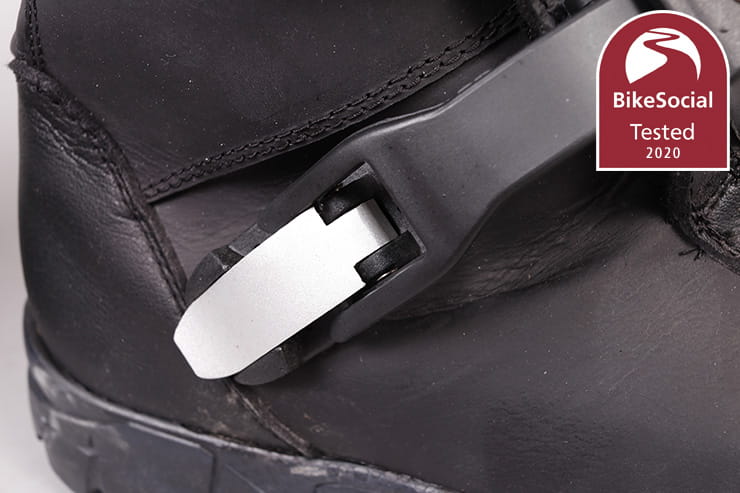 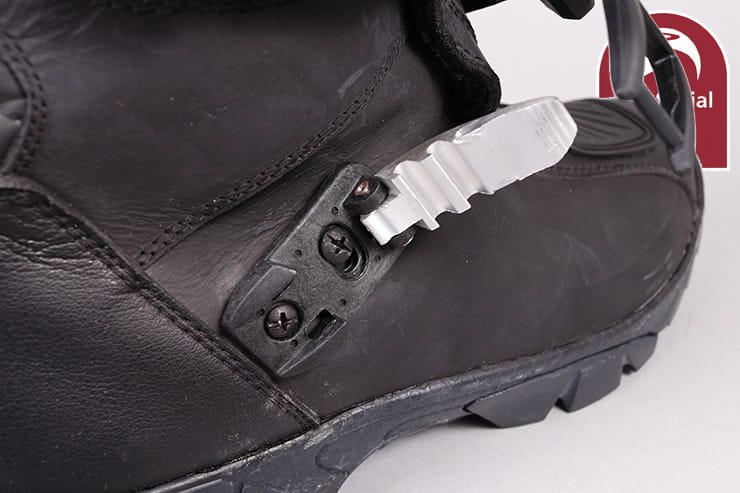 Each boot features two mechanical buckle straps, with the top of the calf secured with Velcro. The buckles offer quite a lot of adjustment at the ankle and shin, while the Velcro gives the flexible adjustment you would expect at the top of the boot. I’m a size 9 and have a wide calf, and these were a very good fit.

While the overall operation is simple and effective, the strap system is something to keep an eye on over the long term when it comes to wear and maintenance. It feels fairly flimsy, though I’ve seen no sign of any issues, and Spada is confident enough to offer a two year warranty. 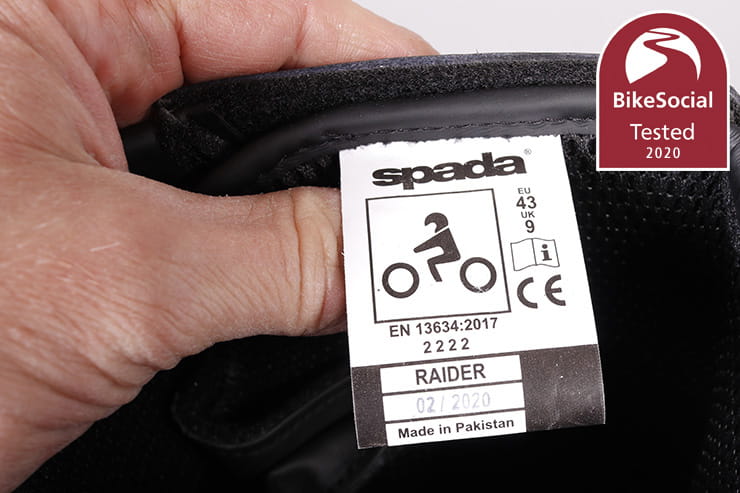 As all motorcycle boots should be, the Spada Raiders are tested to EN 13634:2017, achieving level 2 in rigidity, cut resistance, abrasion resistance and the height of the upper. 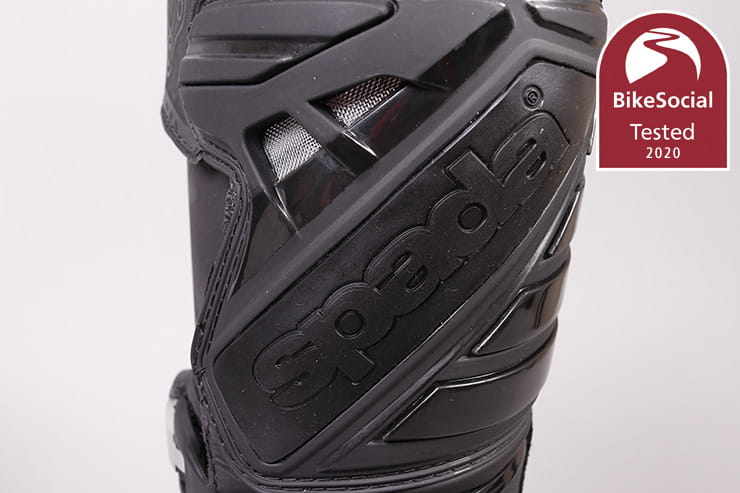 The mesh does allow some air to blow into the top of the boot, though your trousers will be behind it or over it, so it doesn’t make much difference

On test, the Raiders quickly bedded in and felt comfortable within the first few of the 800 miles I’ve put into them so far. My existing boots come from TCX’s sport touring range, and the Raiders perform well compared to their peers.

The inside of the boots felt good on the feet and there were no comfort issues at all. I was apprehensive about using such a weighty boot on a sporty bike, but a few gear changes later, any initial reservations evaporated; I found the Raiders to be as flexible and easy to wear on and off the bike as my regular footwear.

There appeared to be some less-refined elements to the internal construction, particularly around the storm flap, but these were very slight niggles in an otherwise functional item. 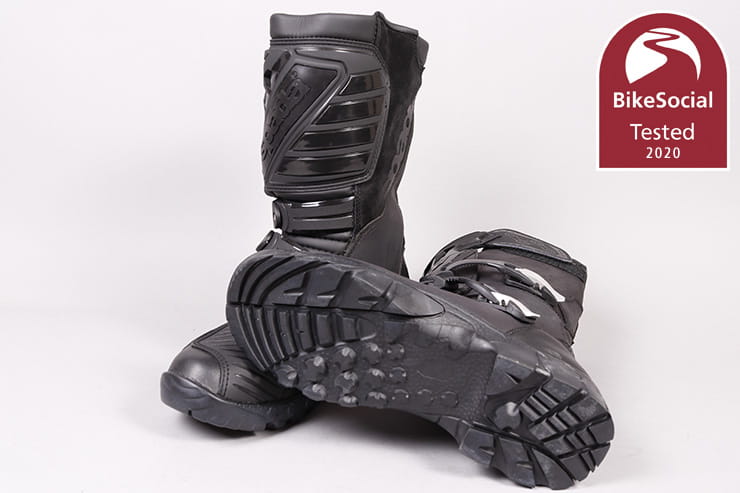 The sole is particularly heavy and the boots appear to be quite stiff at first. I was worried about this initially, but as mentioned the Spadas feel like any other touring boot once in use, just with a sole that’s probably good enough for scrambling up rock faces.

In ordinary use, loose dirt, wet mud or rough walking surfaces are easily handled by the military tread pattern. The only issue might be cleaning off the sole after a particularly adventurous day.

Full marks I think for this all-terrain approach to Spada’s cobbling. 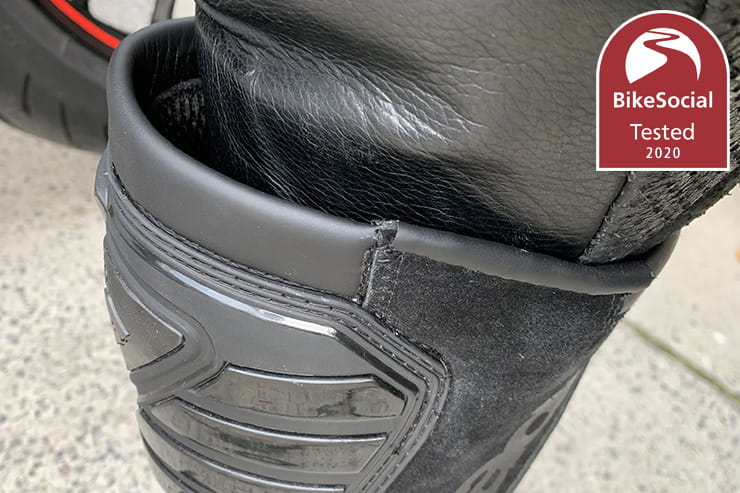 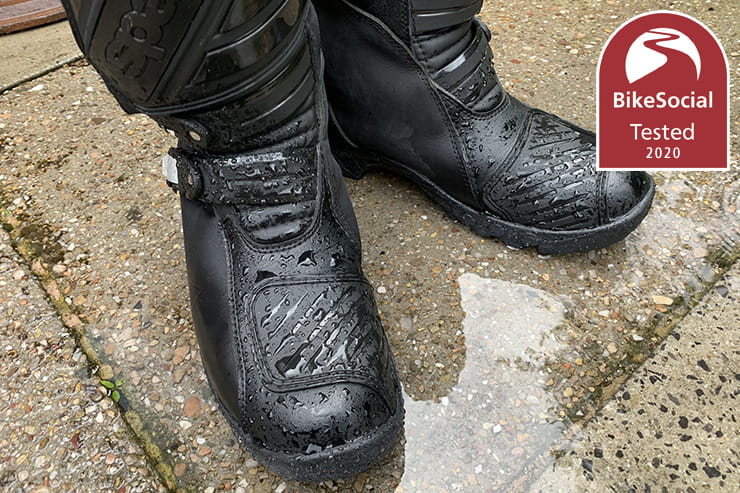 There’s no seal around the top of the boot, so make sure your waterproof trousers go over the outside

Light rain and wet roads don’t trouble these boots. A separate test in heavy rain with trousers over the top found them satisfyingly dry after a good hour of soaking. If you wore these over leather pants however, the gap that appears between the front of the boot and your shin might not provide such a weather-tight seal.

While the outer leather soaked up some of the dampness, inside, everything was satisfyingly bone dry.

With a decent price point, the Spada Raider is a substantial touring boot. Its protection comes with some added weight, and the aggressively-patterned rubber sole is great for grip but less nimble than other flatter-soled biking boots you might wear on sportier bike pegs.

I was pleased by the instant comfort levels and the fact that gear-changing and braking were easily done in this chunky footwear.

The rachet buckles are a bit neo-goth and I’m not sure how the plastic straps will last over time. I’d also prefer that the buckles were finished in a more subtle black, rather than an industrial brushed aluminium look.

The Velcro panel is substantial and offers ample calf adjustment, although the trimmed finish on the storm flap was a little disappointing. Far outweighing this though is the performance of the boot along with the satisfyingly extensive use of leather and nubuck that almost defies the retail price (which is £110 less than similarly-styled TCX boots like the Drifters).

If you don’t want to weigh in with full-on adventure boots, these should certainly suit the hardened tourer looking for four-season footwear with a firm grip on things.