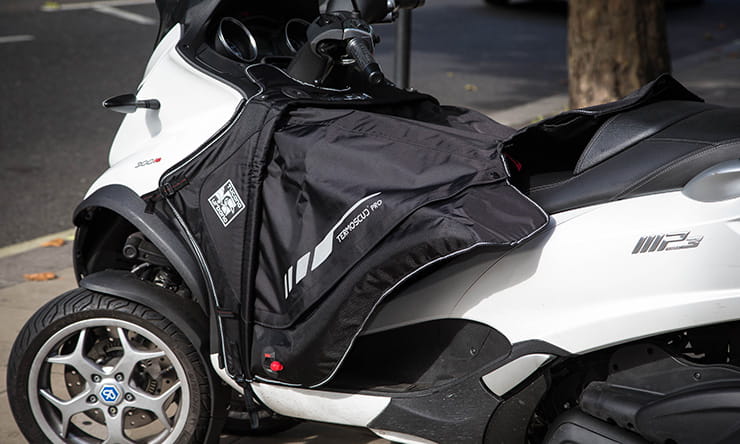 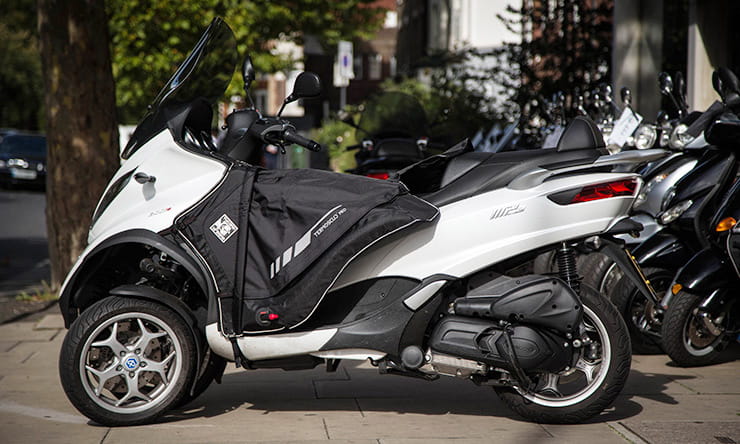 As an all-year-round biker I know how frustrating it can be to have to strip down to your underwear and get kitted up for a cold or wet ride to work, then repeat the process when you’re there, before doing it all again at home time. As for going out at lunch, it’s sometimes just too much hassle…

Living in a more rural area, I'm usually on my long-term test Suzuki GSX-S750, but in city centres, London particularly, I’d almost certainly opt for a large scooter. The trouble is, while the front bodywork offers a little protection, you’re still very open to the elements.

Tucano Urbano’s Termoscud range is available for a wide variety of scooters and some motorcycles, including the R 1200 GS, but it’s the scooter market that’s taken to the product most.

The biggest pain with riding in the winter is your trousers, but using a cover like this means you can potentially ride in your everyday jeans, just slinging a jacket on to keep your top dry. Safety implications of not wearing proper biking trousers aside, it makes riding a powered two-wheeler more practical and enticing… 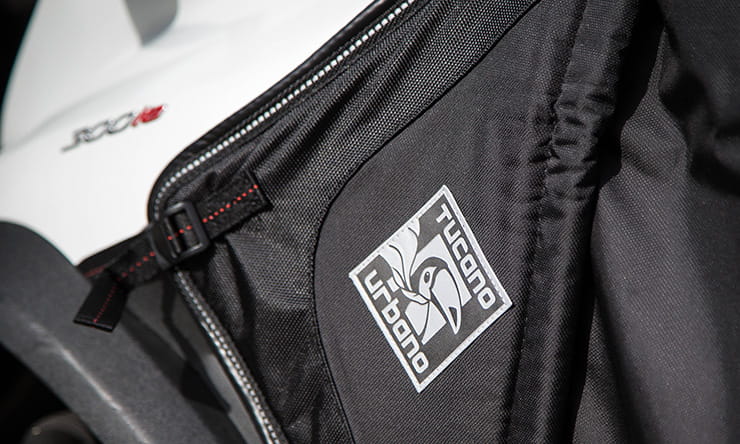 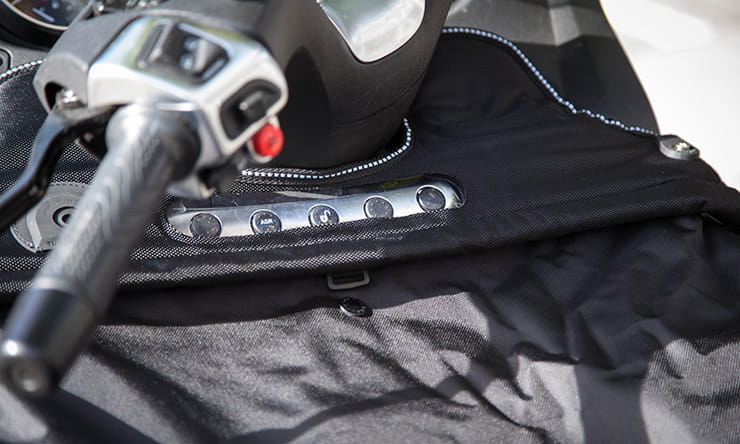 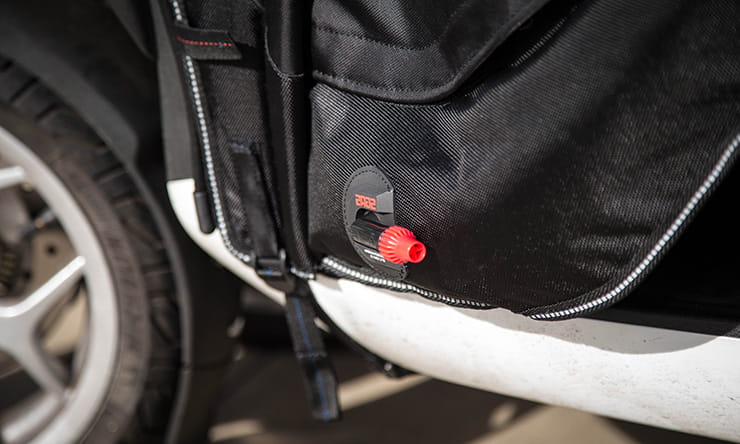 The idea is to leave the cover fitted throughout the year, just removing the thermal liner in the summer

The new Termoscud Pro is currently available only for a limited range of super-scooters – the largest market for this kit – and has been designed as a four-season product. By including a removable thermal liner, the intention is that it’s left on all summer to avoid being caught out by the rain, then the liner can be added as the temperature drops.

The tough, waterproof fabric skirt fixes in a variety of ways to your machine – on the 500cc Piaggio MP3 I tried it on, it attached to two brackets that were bolted to current fixing points just below the steering column, as well as securing under the front fairing trim above the wheels. It also attaches just under the foot boards on either side.

The skirt has replaceable air-bags along the bottom edge of either side that stop it flapping when riding at speed. In this first-impressions test, I was only able to get up to 45mph, but the Termoscud was totally still, showing no signs of wanting to lift. I look forward to a more in-depth test that’ll allow us to confirm that it’s as good at motorway speeds.

An inflation adaptor is included that means you don’t have to put your mouth to the potentially grubby valve, or you can use a pump. 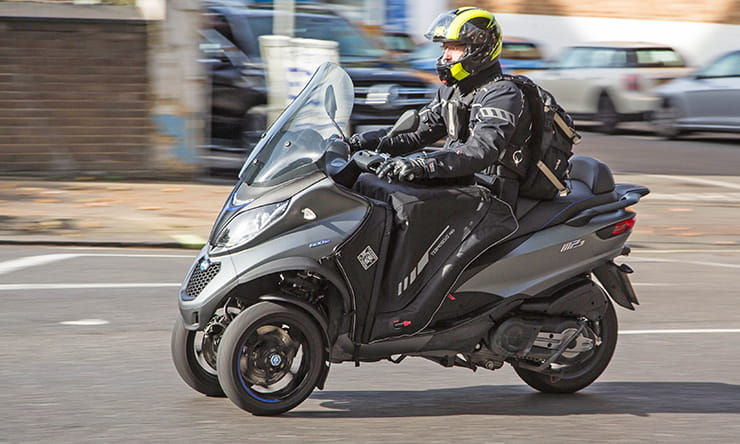 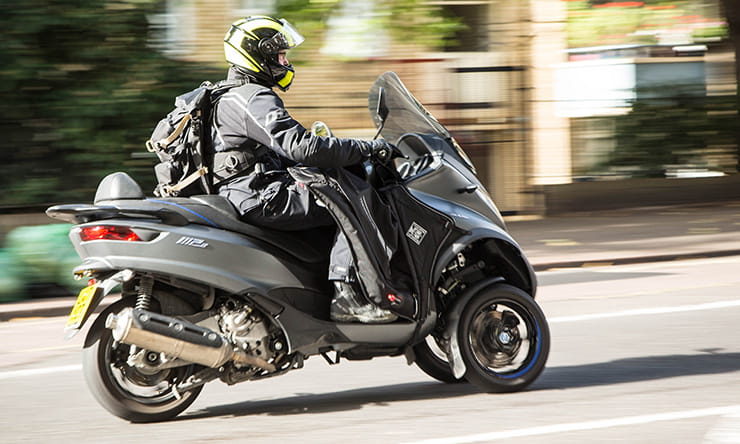 While it was a dry day when I tried the Termoscud, my legs were very well covered. There’s little doubt that in a downpour, the tops and backs of your legs would probably still get wet, but the sense of enclosure was impressive. There’s a chest cover that straps around your neck that will help prevent water driving into your crutch, which has a quick-release buckle held in place by a Velcro strap designed to pull free if you were to fall off the bike. 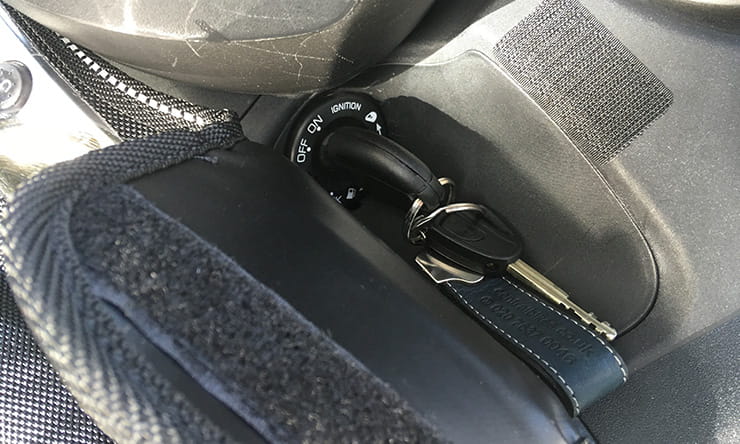 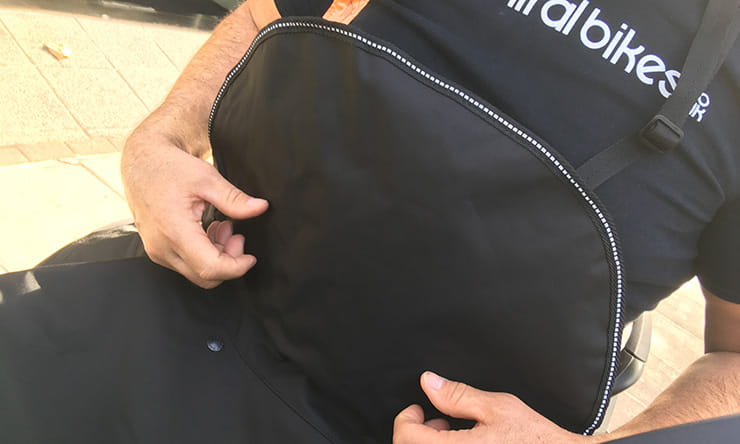 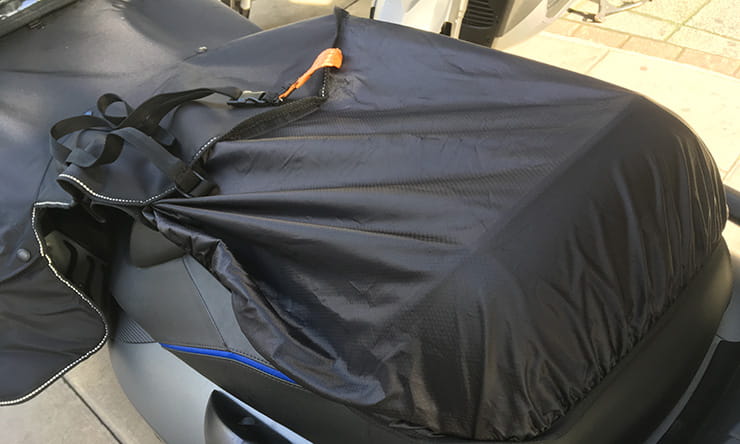 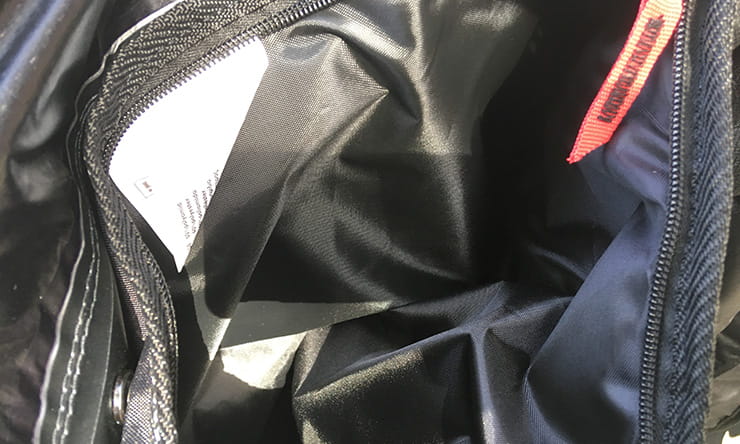 The ignition keys is covered, while a chest cover, seat cover and pocket are all tucked away in the top of the skirt

Cleverly, the ignition barrel was completely covered by a tough flap, making it very difficult for a potential bike-jacker to snatch the keys while you’re sat at the lights. There’s also a fixing point for Tucano Urbano’s waterproof smartphone pouch, which costs an extra £22.99.

The Termoscud Pro features a pull-out seat cover to keep your bike dry while it’s parked, as well as a zipped pocket that’ll swallow pretty much anything you’ll need access to.

Most importantly though, the one thing that always made me think these skirts were a daft idea – the restriction to your legs when you pull up – turned out to be no problem at all. There’s enough weight and stability in the air bags to keep the skirt snug against the foot boards, but they never once prevented me easily sliding either foot out as I pulled to a stop.

The BikeSocial Test Team will be bringing you a full winter review of the Termoscud Pro, but until then, I’m impressed with what might not offer the weather protection of a car, but could certainly transform the comfort of a scooter in the rain...