I spent a large part of my life under the impression that motorcycle covers would eventually ruin the paint of the bike they were draped over, as well as trap moisture so that all the metal bits would start rusting sooner rather than later. It was therefore with great scepticism that I bought the Oxford Stormex bike cover the same day I bought my Honda Deauville, in March last year. Buying the cover was unavoidable as I have to leave the bike outside in a parking space, and both have been in constant use since then…

Even at a mere 650cc, anyone who’s seen a Deauville knows that it’s not a dainty bike thanks to the full fairing and built-in panniers. With the top-box mounted I guessed that I would need the most expensive size (X-large) and I was not wrong. The cover certainly fit lengthwise and came down over about three quarters of the bike’s height. It wasn’t deep enough to cover the Motad exhaust, and stretched just far enough to tuck underneath the back mud guard. I exchanged the stock windshield with a higher one that includes an adjustable outer wind stopper at the top, but the front section of the cover still reaches to the ground so there’s no shortage of material there.

I eventually took off the top box as I wasn’t using it enough to justify the extra wind resistance and the ‘do not exceed 120 km/h’ doesn’t really fit in with my, ermm, riding style. The cover now fits all the way to the ground on the back as well, with extra to spare.

I am, however a bit dubious just how much of a Goldwing or Pan-European it would actually wrap around. On the product page there’s a downloadable size chart, so you can make a sensible decision as to which size is suitable for your bike.

Thanks to the elasticated bottom seam the cover snaps into place once it’s been wrapped around all the bits and pieces sticking out, and it stays in place. 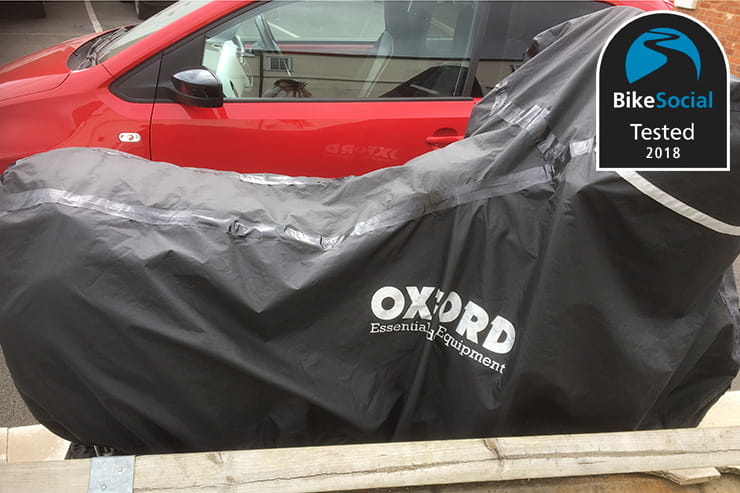 The cover is made of rain-proof and breathable material with a webbed click belly strap in the middle to keep it from blowing away in strong winds. My parking space is relatively wind protected as there are walls close by, and the car that shares the parking space is quite close to the bike. However, I have seen the wind rip at the cover and it hasn’t come off yet.

It has a fleece type inner lining that doesn’t stick to the paint in hot weather and is soft so it doesn’t scratch the surfaces either. The bottom 20cm of the inner lining is made of heat-resistant non-fleecy material. It’s supposed to be able to be in contact with hot exhausts without melting holes in the cover, and it’s worked.

All the seams are externally bonded and covered with rubber tape.

A clear plastic panel in the back allows you to expose the registration plate if you take away the inner flap – technically your reg is always meant to be kept on display, so the option’s there if you want it. A clear plastic panel in the front is to accept the Oxford solar recharger. That, along with the reflective strips on the otherwise all black cover, are nice little features.

There are also small Velcro flap pouches at the front and back for protective storage of padlocks when using chains. Additionally, there are pairs of reinforced holes at the bottom front and back to thread chains through for extra security and thereby presenting another hassle factor for potential thieves. Covers can be a very real deterrent to thieves, and locking it into your chain will frustrate them further.

The cover is quite substantial, especially around the edges; it can’t be folded neatly like a bed sheet without some amount of effort. It comes off almost every morning and gets put back on in the evenings, and can be a bit of a wrestling match, especially when it gets caught on pegs and handlebars, which it does quite often. I wouldn’t fancy trying to get it back into the original plastic bag it came in – it’s meant for storage but that would be like trying to stuff Pandora back into her box after opening.

The cover gets unceremoniously scrunched together just enough so it can be crammed into the boot of my miniature hatchback. On wet mornings I turn it inside out so as to not soak the inside of the car. 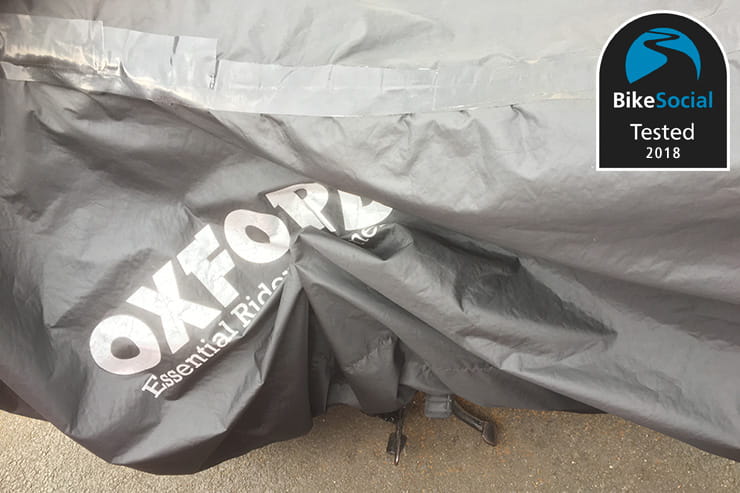 I think the cover looks good and fits quite well. Thanks to the UV colourfast dyes Oxford uses (their words, not mine), the overall colour has hardly faded. I have to put a slight caveat on that as most days the cover is off and stored in a light protected space. The parking space also gets no morning sun, even at the height of summer. So, realistically, the cover has been exposed to the sun for perhaps a maximum of 3 months altogether.

The bottom inside lining has got stained with dirt, oils and other fluids from my maintenance kit, but it hasn’t become too dirty to handle. Surprisingly, the outside doesn’t look stained or very worn. Even better, despite being wedged between a car with sharp doors and a splintery wooden rail, it hasn’t gained any scratches, rips or holes.

The big fly in the ointment though is the rubber taping over the seams; it’s not hardy by any stretch of the imagination. Most of the strips discoloured quickly and it didn’t take long before the glue holding it to the seams crumbled to white powder residue and bits of tape were hanging off in sad-looking strips. I cut off the debris and replaced it with Gorilla tape. It looks odd but I couldn’t think of anything else to replace the tape with. At least it’s held on. 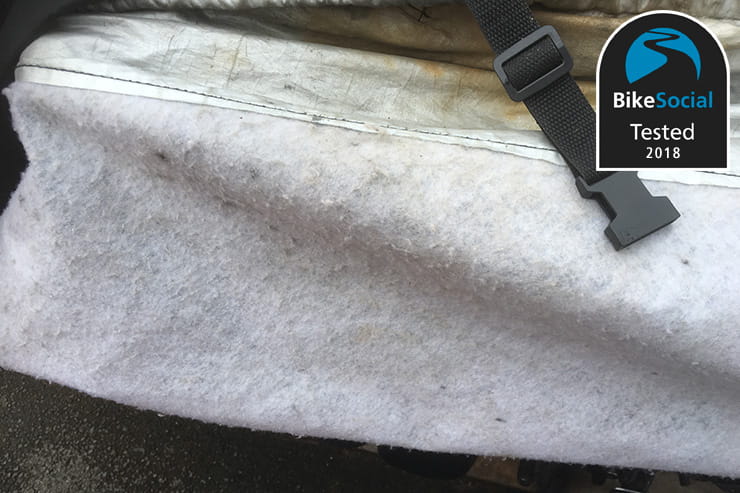 The inside of the lining has kept surprisingly clean, despite more than a year of continuous use

So, has it done what I bought it for? Overall, yes. It’s kept the bike dry, almost all the way to the bottom. Almost; water tends to pool in the centre of the cover over the seat, and then the seat does have moisture on it. If there’s a lot of moisture in the air overnight, there will be a thin watery film covering the bike even though the inner lining feels fairly dry. I think part of the problem is the failure of the rubber tape over the seams; while the Gorilla tape is a good substitute it may not be quite up to the job. On the other hand, the Gorilla tape has lasted longer than the original tape.

Despite having neglected to wipe it down thoroughly on some wet and muddy days before throwing the cover on, the inner lining has remained surprisingly clean; no easy feat for a white lining. I can’t make any declarations whether it will keep the dreaded green fungus at bay – a feature that I have seen on the soft parts on so many bikes kept under covers in years past – as the longest my bike has spent covered up continuously is about a week at a time. Moss really doesn’t grow on a rolling stone.

If you have an Oxford Barrier chain and lock like me, then the front and back pouches to store the lock in are pretty useless as the lock is an integrated 360 degree swivel unit, so slides out of the pouches unless you spend about five minutes manipulating the lock and Velcro flaps. But the lock hasn’t shown any signs of rust in any case; it obviously gets enough protection being tucked close to the tyre, face down.

The cover has also survived shards of ice, being pelted with snowballs, being stretched by the weight of wet snow, being pushed and pulled in all directions and resting all kinds of non-motorcycle related objects on it. 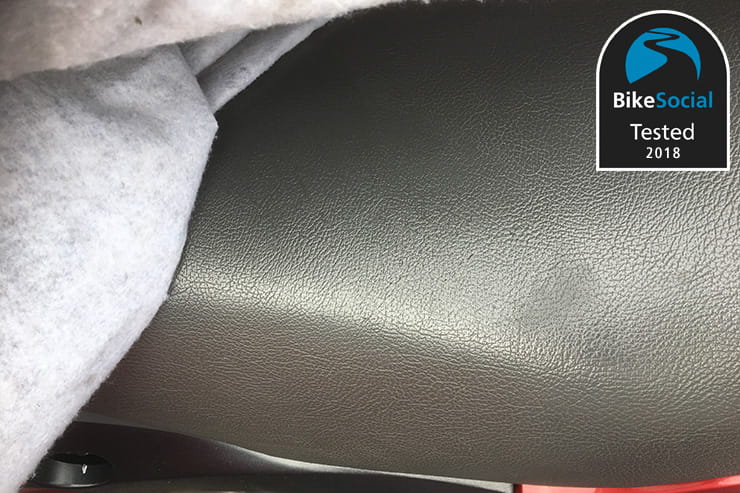 On very wet nights, some moisture can appear on the seat

Despite all my historic prejudices against motorcycle covers, I’ve been very pleased with this one. It’s a solid piece of kit that protects the bike and keeps it dry enough to ride without getting a wet bum. Of course, a cover will never replace a proper garage, but if you recognise that textile covers have an upper limit of moisture tolerance then you won’t be disappointed with this one. Let’s face it; when the proper English fog and mist sets in, I think not even one of those garage tents would keep a bike dry.

In hindsight, the Oxford Stormex was well worth the money, and I can only hope it will keep this level of protection for a while yet. If you use your bike quite regularly, I can definitely recommend this cover.

It’s now July 2019 and I can happily report that the cover I have written about was still in use, albeit on a smaller bike, up to three weeks ago. Since I wrote the review I can honestly say that, apart from the tape covering the seams, this cover has aged rather well; the inside covering is still soft and without any bald patches. Despite the numerous contact with corrosive materials (including bird droppings galore) it has not developed holes or even thin patches on the outside. The clear plastic pocket covers had started to crack but that’s probably mostly due to the way it gets scrunched into the boot of my car every day. There’s not a speck of mould anywhere, despite being folded and tucked away in both wet and dry conditions. It really has stood the test of time.

At an evening event at my favourite dealership, the Two Wheel Centre in Harpenden,  I met the regional Oxford representative. I was singing the praises of the much-abused but fully-functional Stormex, mentioning as an aside that I had to replace the seam tapes fairly early on with duct tape after Oxford’s own crumbled and turned into flying ribbon banners.

He explained to me that the glue used was at fault, and if I brought in my old cover, he would give me a new one, just like that. I gingerly explained that the cover was two years old and in use every day – well out of any warranty period. However, to my very happy surprise he insisted that this was not an issue and repeated his offer. So, I now have a shiny new cover and the tape over the seams seems to be holding up just fine. He also persuaded me to buy an HJC C70 helmet, but I expect I’ll be writing about that one at some point in the future.

Something else that I didn’t realise; just as with all other rain gear, it’s a good idea to reproof a cover. Oxford recommends its Oxford RainSeal Waterproofing Spray be used bi-annually. For this new cover, I will keep that in mind.