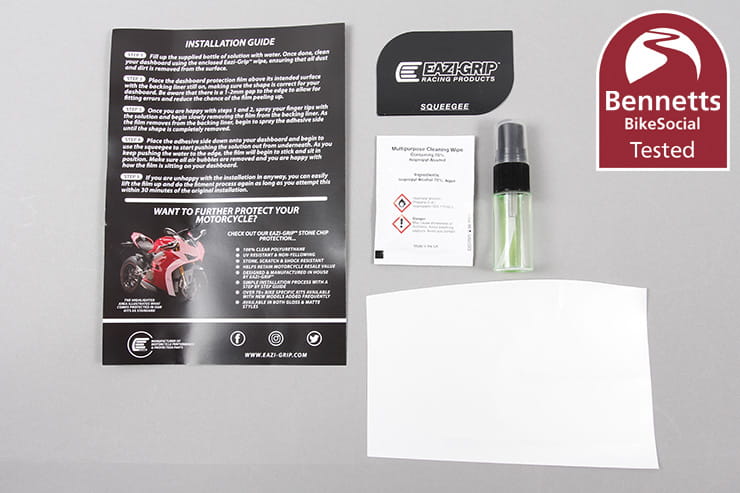 Being tucked behind the fairing and out of the elements, you might wonder why anybody sells a protective film for your motorcycle’s clocks, but the Eazi-Grip motorcycle dashboard protector promises to be easy to apply, virtually invisible, and to offer scratch protection for your bike’s expensive dash.

How easy is it to fit?

According to the website, fitting the Eazi-Grip motorcycle dashboard protector is quick and easy; ‘Just peel, apply and ride’. In practice, while it’s a bit more complicated than that, it’s not beyond anyone who’s willing to spare about 15 minutes and has a clean space to work.

Everything you need is supplied with the kit, including a small spray bottle with a little detergent in the bottom, which you just need to top up with water before use. This isn’t for cleaning the clocks – it’s to allow the protector to float onto the screen for perfect positioning and no bubbles.

Assuming your dash is dust and grit-free, the isopropyl alcohol wipe that comes with the protector is used to ensure there are no greasy fingerprints or marks left on the clocks – give it a gentle wipe over and it’ll soon dry off.

Making sure your hands and working space and clean, now spray your fingertips with the detergent bottle to prevent any fingerprints on the protector’s adhesive before carefully removing the backing paper. As you take it off, spray the sticky side of the film with the detergent; if you’ve never applied any large stickers or graphics, this will feel odd but don’t worry – you won’t harm the glue.

With the backing off and the sticky side of the protector covered with the spray, make sure your fingers are still wet with the detergent, then place the film on your dash.

You’ll be able to float the protector around on the clocks; there’s a gap of about a millimetre or so between the edge of the protector and the outside of the dash’s screen, so once you’re happy with the position, use the supplied squeegee – which is helpfully shaped with curved and sharp corners – to push the water out from the centre of the protector to the outside.

Because the detergent solution is keeping the adhesive from setting, you can get any bubbles out very easily. And don’t worry if you feel you’ve messed it up – you’ve got up to 30 minutes before it sets properly, so you can remove it and start again if needs be. 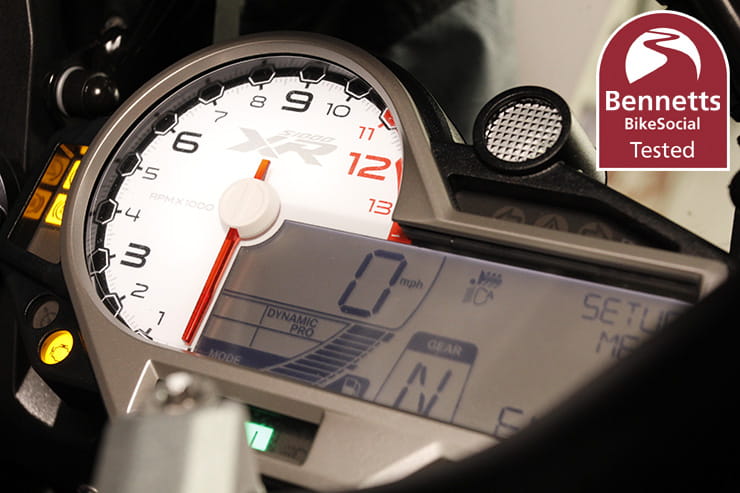 How does it look when it’s on?

Made of clear polyurethane, the Eazi-Grip dashboard protector really is practically invisible once fitted. I was surprised at just how effectively it disappears once it’s on.

Look really closely and you’ll just about be able to see the edge of the film, but that’s it.

I’ve had it fitted for a couple of months now, and the bike’s been properly washed, though it hasn’t been out much due to lockdown.

The coming months will see me using the bike a lot more, and hopefully in plenty of bright sunlight, but the Eazi-Grip protector is claimed to be UV-resistant and non-yellowing. Needless to say, I’ll update this review if anything changes.

Does it stay on while washing the bike?

The screen doesn’t tend to get as aggressive a wash as the rest of a bike, so it should come as no surprise that the protector hasn’t suffered any detrimental effects after washing; the corners aren’t peeling and it’s shown no signs of any harm. 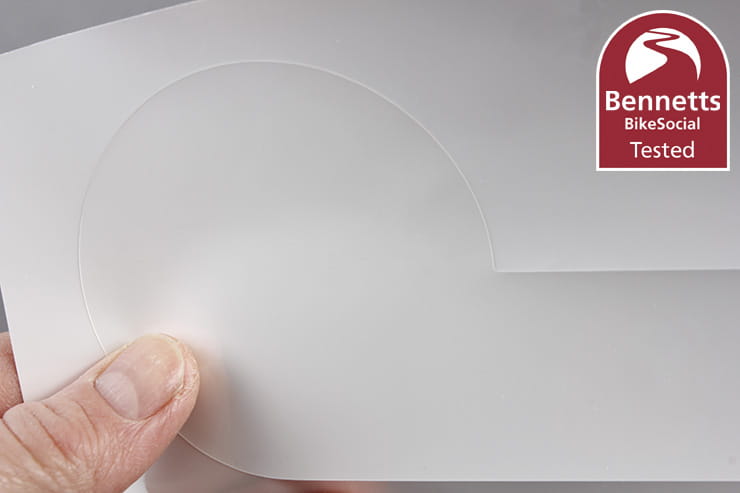 It is there on the backing sheet, it’s just really, really transparent!

Give that there’s now a thin protective film over the dash, obviously it is protecting the original screen from any scuffs or scratches. But what’s particularly impressive is how resilient the Eazi-Grip is; gently running a knife over the surface leaves a scratch as it would on the bike’s plastic, but this ‘heals’ very quickly – a quick rub with your thumb and it disappears. 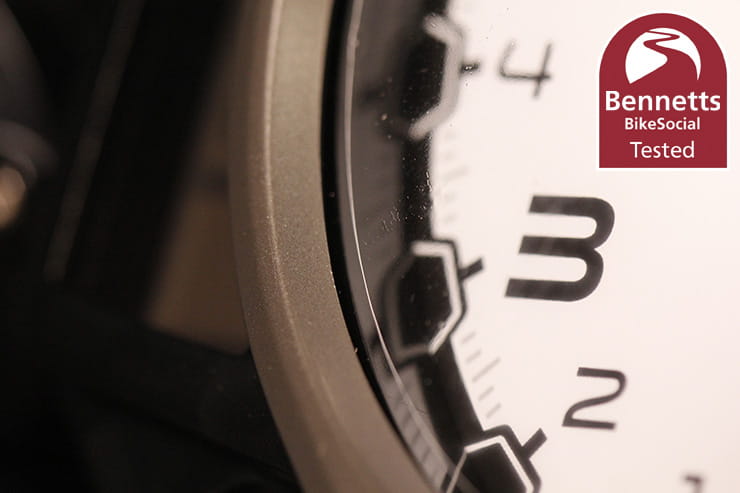 Only with the macro lens fitted, and under the right lighting is the edge of the film more noticeable

While the dash is far less vulnerable than most other parts of your bike, it only takes one scratch during cleaning to really spoil the clocks, especially when you’re looking at them with the sun behind you.

Polishing even fine scratches out of your dash is no fun, and keeping any bike looking as good as possible can help improve its value, so given that these only cost £9.99 (the Goldwing one is £19.99), I do think it’s worth having one.

Do you have one of these protectors? Email us at enquiries@bikesocial.co.uk to tell everyone what you think of them…