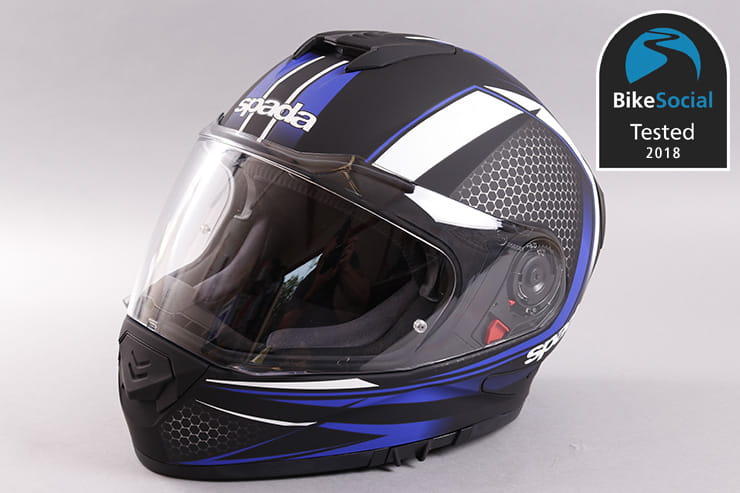 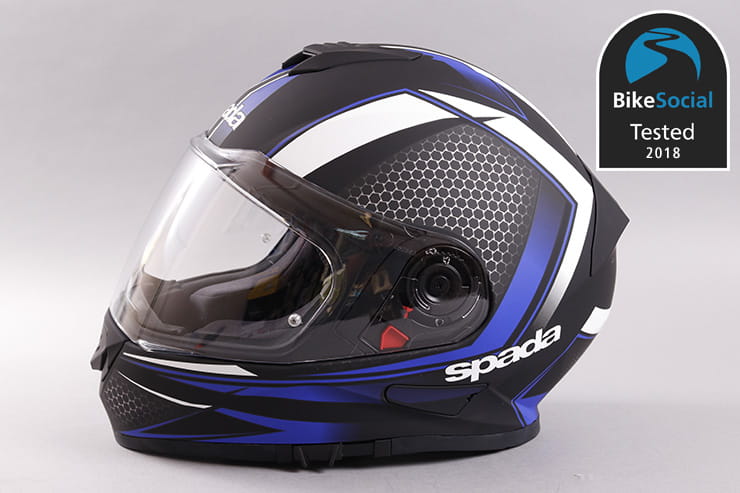 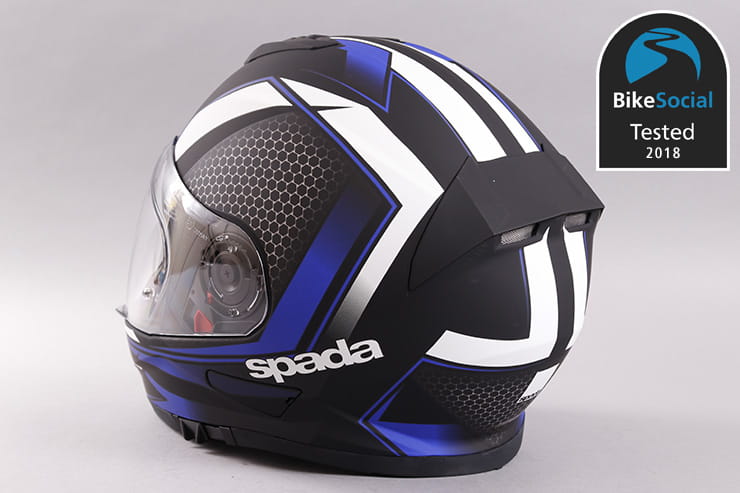 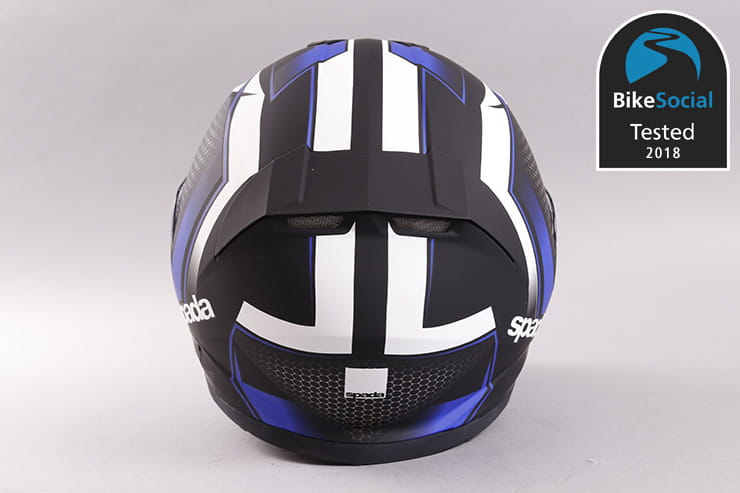 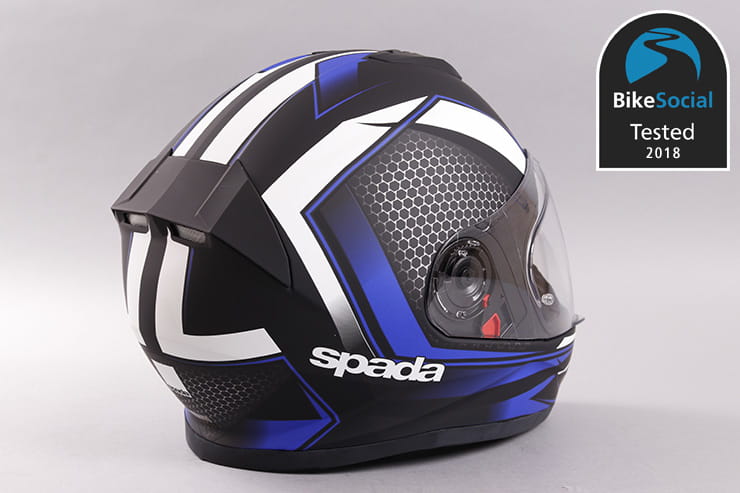 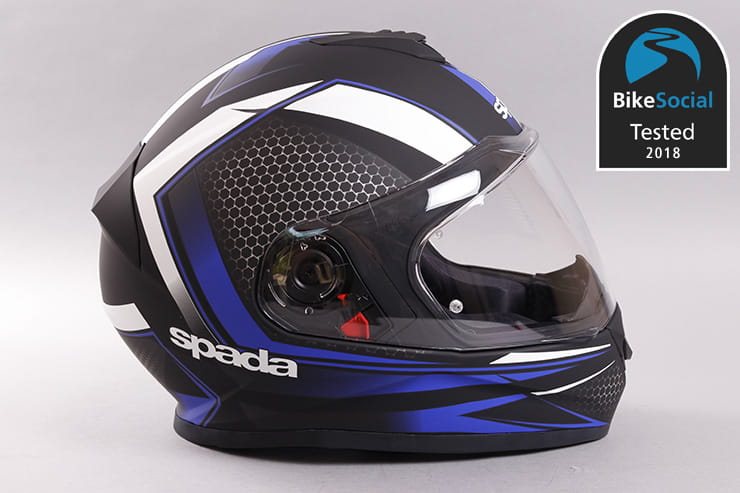 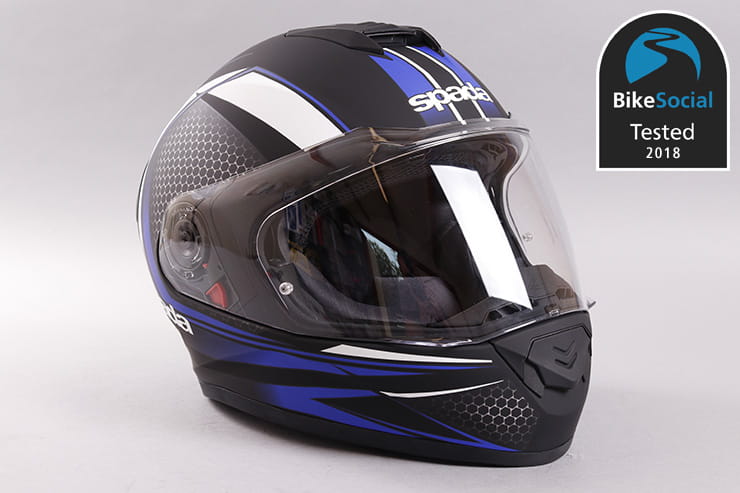 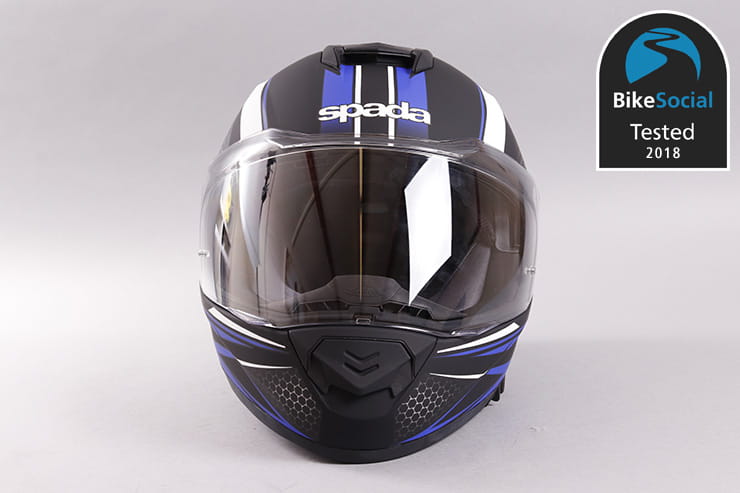 Costing £109.99 for plain colours and £119.99 for graphics, the full-face Spada RP One has been used by BikeSocial Test Team member Graham Mudd on his Kawasaki Versys 650 and Suzuki Burgman 650 for regular long-distance commuting…

The thermo-plastic shell of this ‘Renegade’ white and blue model has a decent matt finish with sharp graphics and quality-feeling vents that have a soft-touch coating. The wire mesh on the exhausts is a little delicate, but it’s a good-looking lid for the price.

At 1563g, the Spada is fairly average in weight for a budget full-face helmet, and lighter than others I’ve owned that cost twice as much – I’m certainly finding it less fatiguing on long journeys. 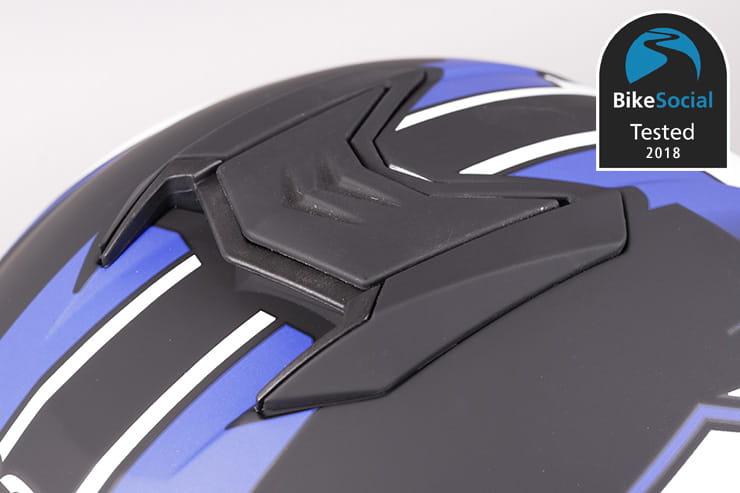 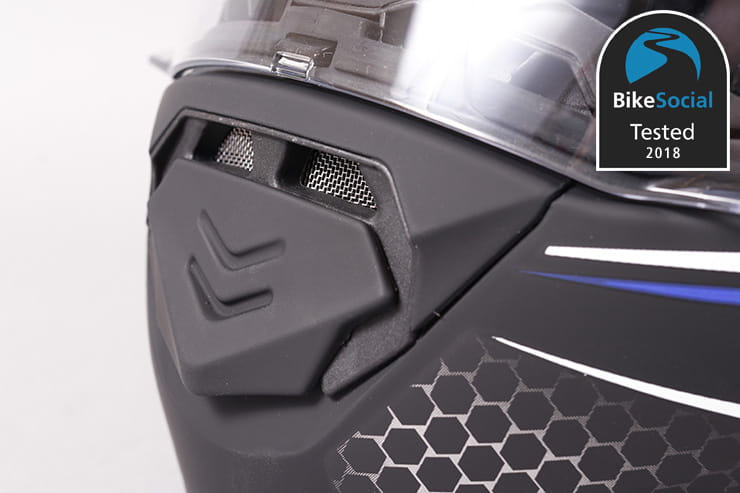 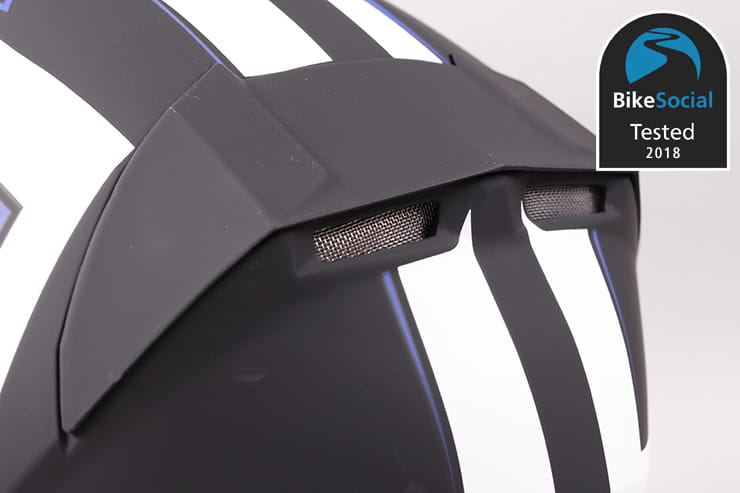 The vents are large and really well placed at the crown and chin, along with exhaust ports on the rear. They’re easily found and operated with both summer and winter gloves, and open and shut with a good firm click, staying open or closed at all speeds.

When open, the Spada delivers a good flow of cooling air to your head and face. In fact, much better airflow than my Shark Evoline 3, which is over twice the price. However, closing the vents doesn’t seem to make much difference; there’s still a sizable draught. You’ll need a balaclava in winter.

The chin curtain does a decent job of stopping wind getting up past your neck. 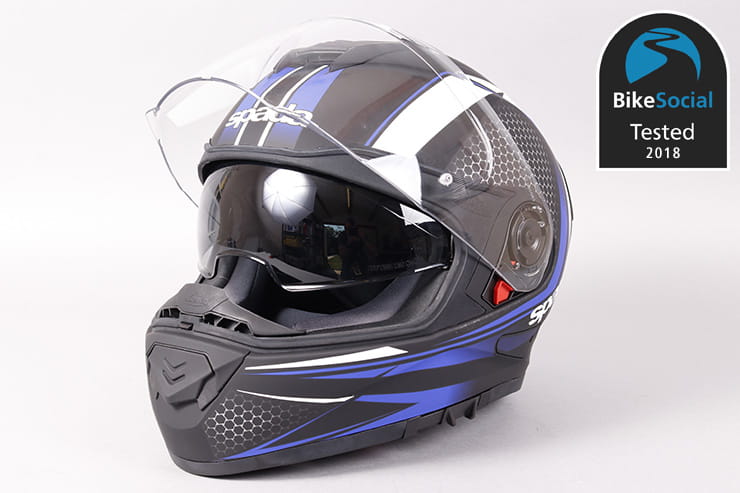 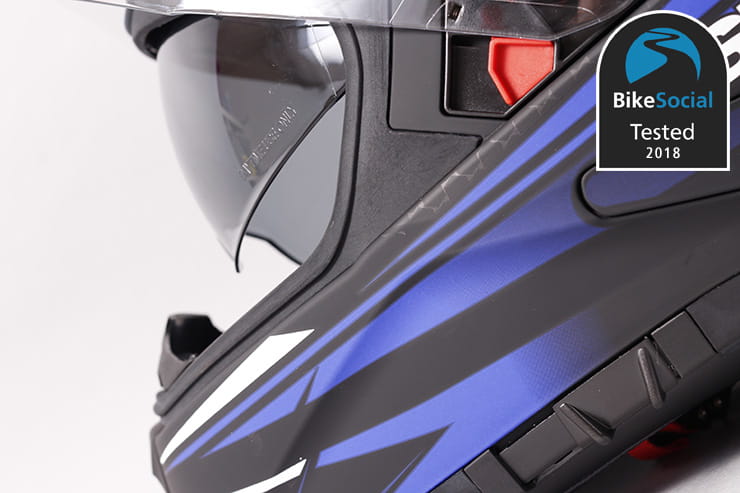 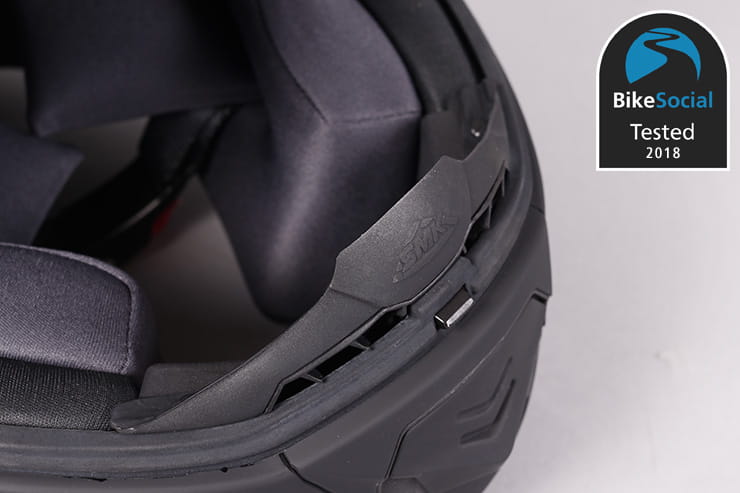 The visor has thumb tabs on the left and right, which I really like as it makes it easier to operate with the right hand when holding the clutch in. The opening mechanism is a smooth six-position ratchet, which can also be popped just open off the closed latch, though I found it often went to the first stage, which can be a bit too drafty in cold weather.

Removing the visor for cleaning couldn’t be simpler; open, pull the red switch on either side and it pops off. Line up the tabs and rotate forward to put back on; a really good design and certainly a lot less fiddly than most helmets I’ve owned in the past.

A Pinlock MaxVision 70 anti-fog insert is supplied (a mid-level insert with improved peripheral vision), which does a great job of keeping the visor clear.

The drop-down sun shield is operated by an easy to locate tab on the lower left side of the chin bar. For me, the shield had an odd square shape and didn’t come down low enough to block out all the bright sun. I’d also say it wasn’t dark enough to be fully effective – smoked rather than dark – which meant I still had to squint in bright conditions.

In very heavy rain, the top edge of the visor seal leaks a little, but it’s not possible to adjust the plates to fix it. 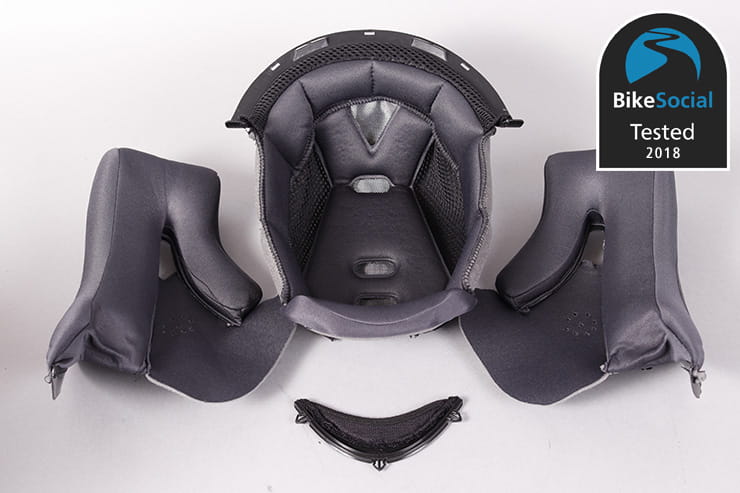 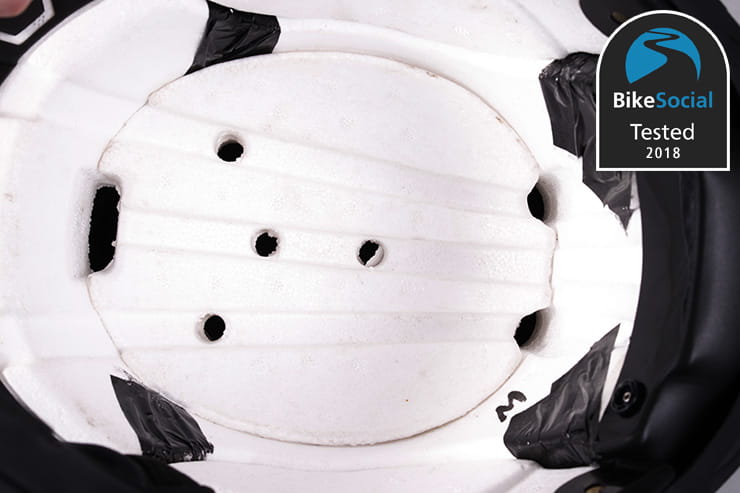 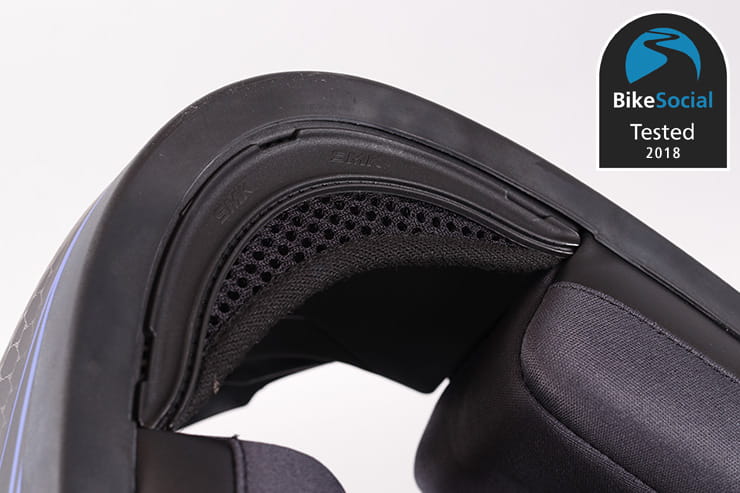 The lining is soft, plush and really well padded. It’s also easy to remove and refit for cleaning, and while the cut-outs in the lining for intercom earpieces are a little shallow  for my device (on long journeys the headset dug uncomfortably into my ear lobes), sound transmission is very good. The operation of the micrometric buckle (ratchet type) is really good; easy to use even with thick gloves on and it gives a reassuringly solid click.

From the start the Spada fitted well and was pretty comfy. At first, after about an hour and a half of riding, the firm cheek pads were making my jaw ache, but this started to ease as the helmet bedded in. It’s firm and supportive, meaning it doesn’t move, but it’s not so tight that it causes headaches or becomes distracting.

The Spada isn’t the quietest full face lid, but for the price I wouldn’t expect more. Compared to my flip-front Evoline it’s noticably quieter and much better streamlined. Air flows over the RP One much more smoothly, meaning significantly less buffeting and wind noise; a pleasant surprise for a helmet in this price bracket.

The Spada is in the budget range I normally buy and is a solidly performing helmet for the price. Comfy, light, a great visor and well ventilated, it has some great features and works just as well as some more expensive lids.

At speed particularly, the reduced buffeting and noise from the well-designed shell improves big mileage comfort. Minor niggles are easily overlooked when considering the strengths of the Spada Renegade in all other areas; if a friend was asking me for recommendations of helmets in this price range, the Spada would be one of them.