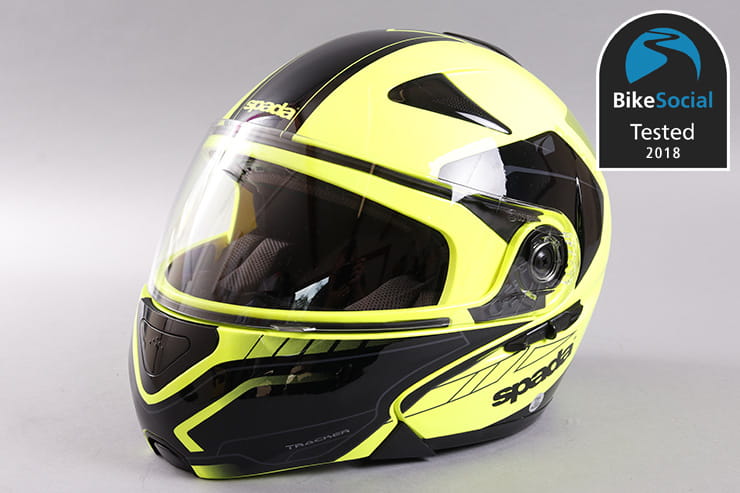 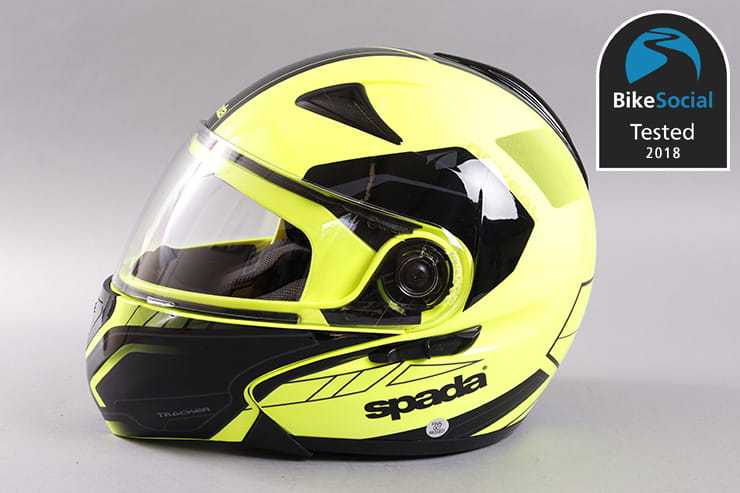 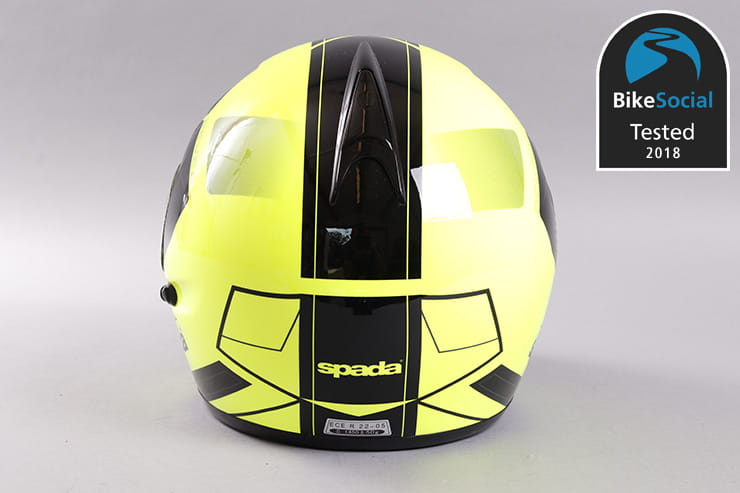 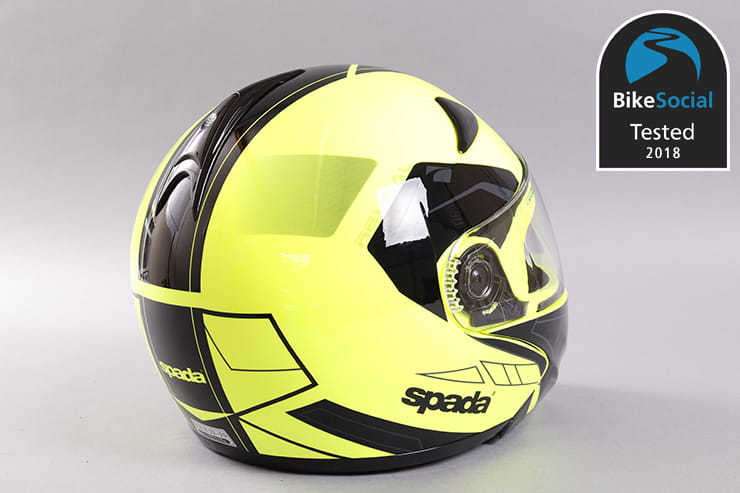 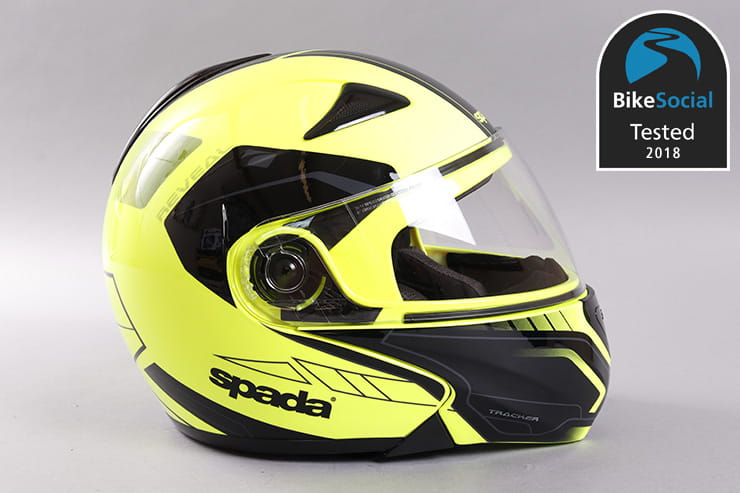 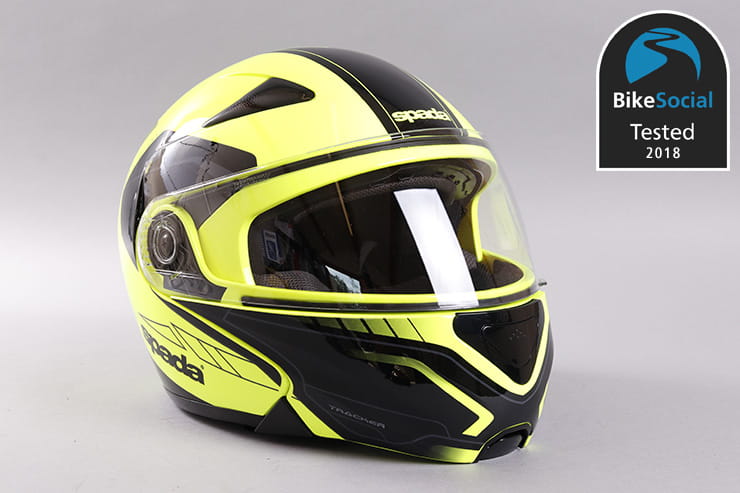 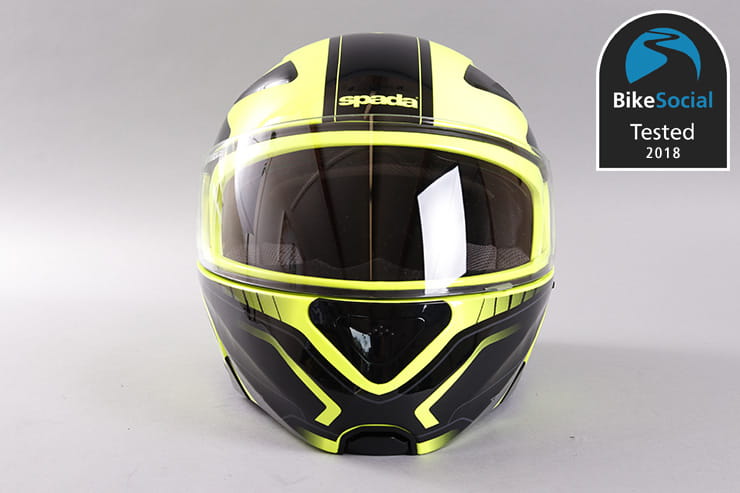 At just £79.99 for plain colours and £89.99 for graphics, the Spada Reveal is an affordable flip-front helmet. Steve Rose used it for his daily commute on his Yamaha Fazer 1000, then I took over with my BMW G310GS…

The thermo plastic shell of this fluoro ‘Tracker’ model has a deep gloss shine and decent graphics, though on close inspection there are a few slightly rough edges. For the money though, it’s unfair to criticise too much.

The helmet is homologated as a full-face, which means it’s only tested for riding with the chin-bar closed. However, it stays in place when riding with it up, and while it does of course feel a bit top heavy, it’s great in hot weather, not to mention the convenience of being able to talk to people when stopped without having to take the lid off. Petrol stops are far easier with a flip-front.

At 1648g, the Reveal isn’t the lightest flip-front BikeSocial has tested, but it’s also not the heaviest. It’s also lighter than the benchmark (and much more expensive) flip-lid, the Shoei Neotec. 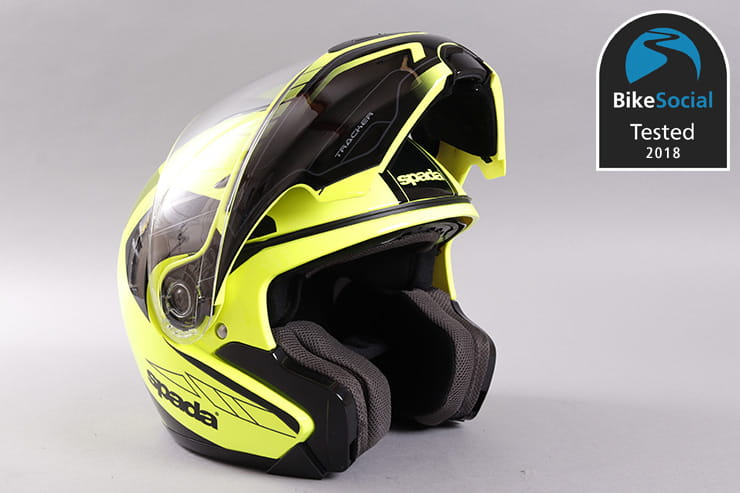 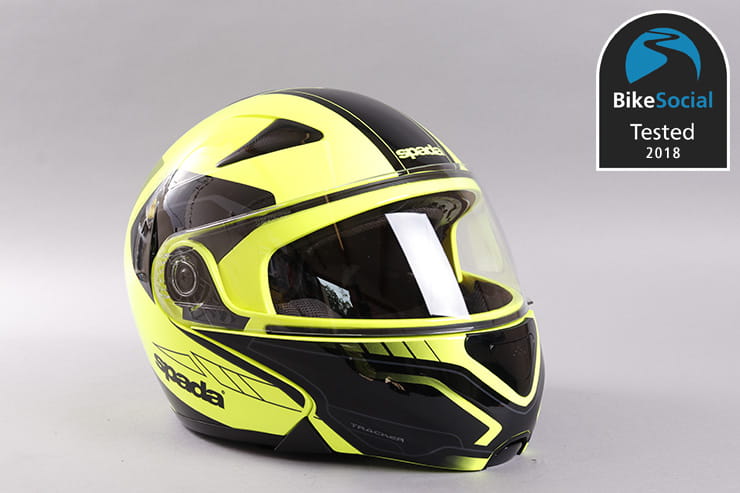 There are two independently closable vents on the brow of the Spada, and one on the chin. There’s a single closeable port on the top too, although I couldn’t find any hole in the inside leading to it.

The vents are easy to operate though make no discernible difference in use. Of course, flipping the chin bar up is like riding in an open-face, but the main reason for any lack of feel from the vents is that – due to there being no chin skirt – the Reveal is extremely airy all the time. In the hottest months this is great, but if riding in winter, this will be a cold lid. 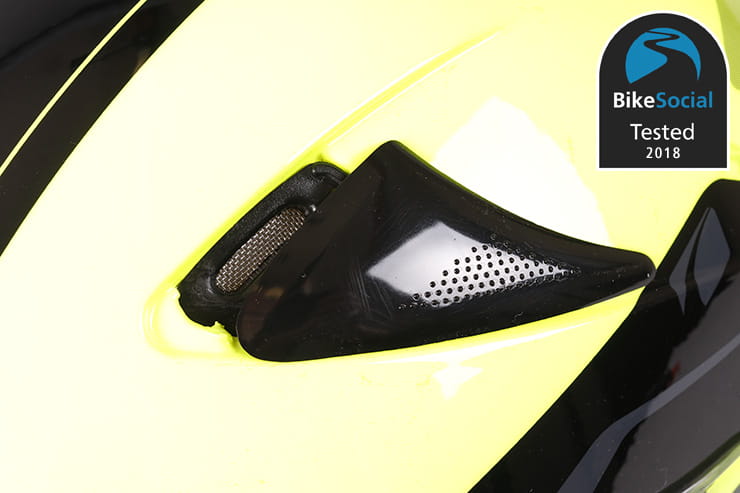 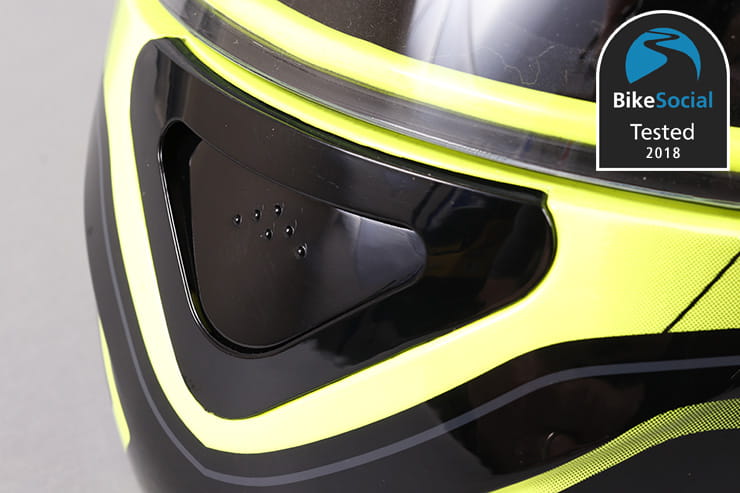 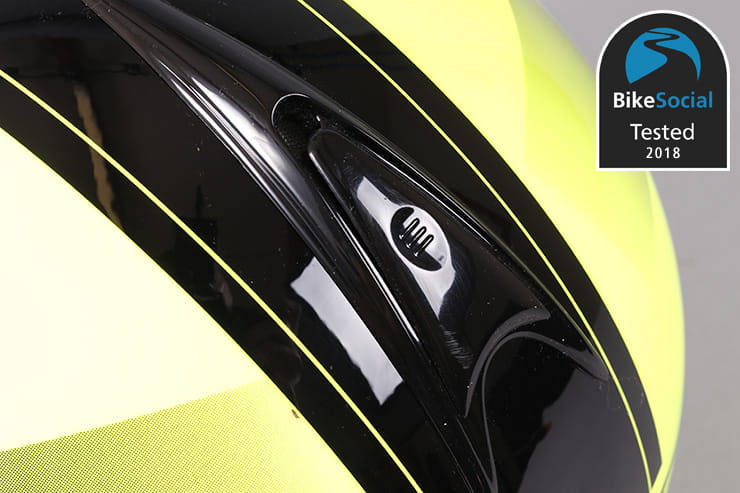 The visor has a single thumb tab on the left to open – I prefer one in the centre or one on either side, as this is a little easier to operate with the right hand while holding the clutch in at the lights. The four position ratchet mechanism is reasonably smooth, and if you’re careful you can use the friction between stages to just crack the visor open.

There’s a small lever on either side of the visor to release it for cleaning, but it’s very small and awkward to open, making it fiddlier than it needs to be.

There’s no option to fit an anti-fog insert like a Pinlock, so use a spray coating or some washing-up liquid if you’re struggling in the colder months, though the airy nature will make fogging less likely.

In heavy rain the top of the visor seal leaks quite a lot, and the mounting plates can’t be adjusted to prevent this.

Impressively at this price, there’s a drop-down sunshield that doesn’t touch my nose, but blocks out most of the sunlight. Some shields leave large gaps at the bottom that can be distracting, but there’s no such problem with the Spada.

Peripheral vision isn’t great as the visor aperture isn’t very big, and comes up quite high at the sides. This is made worse on this fluoro yellow version as the paint is visible from the inside, and accentuates the frame. 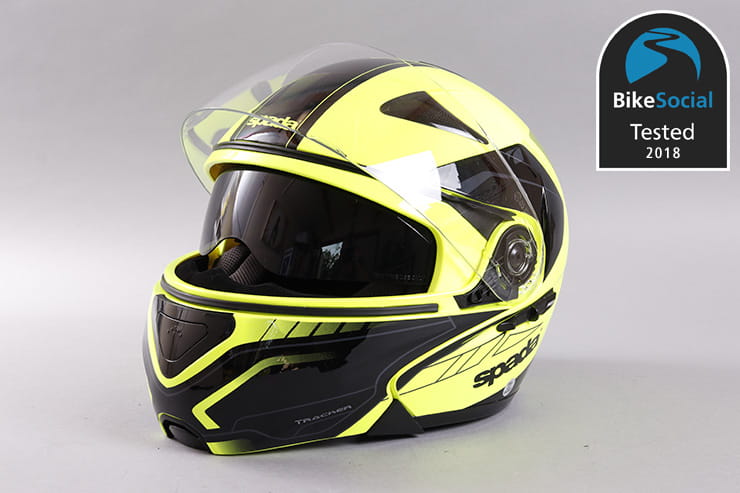 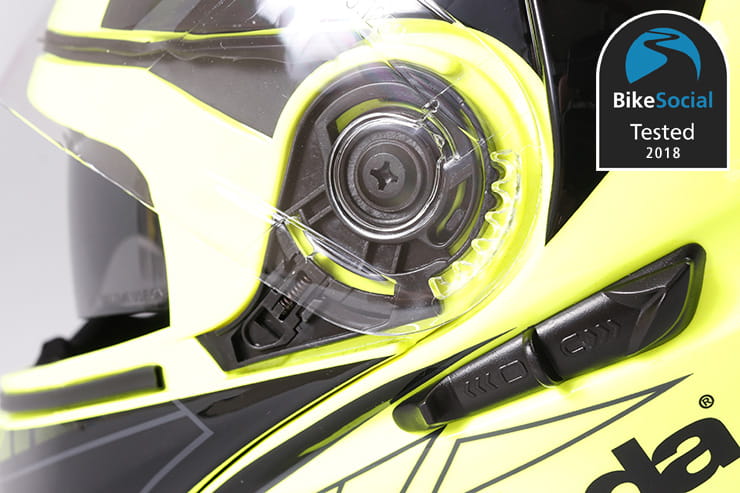 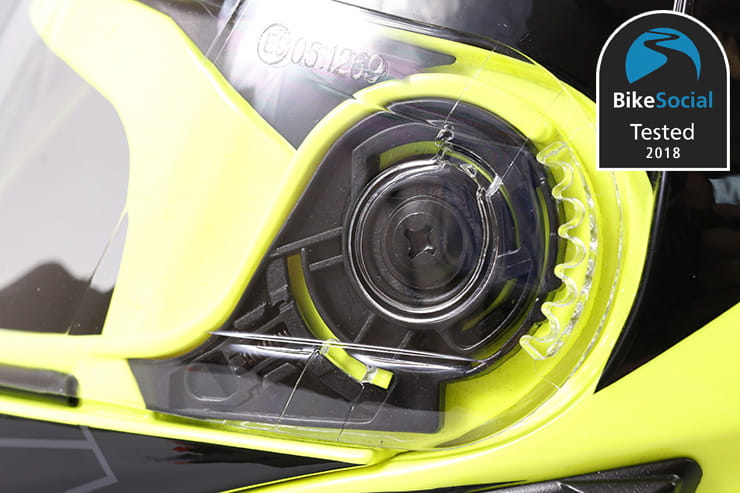 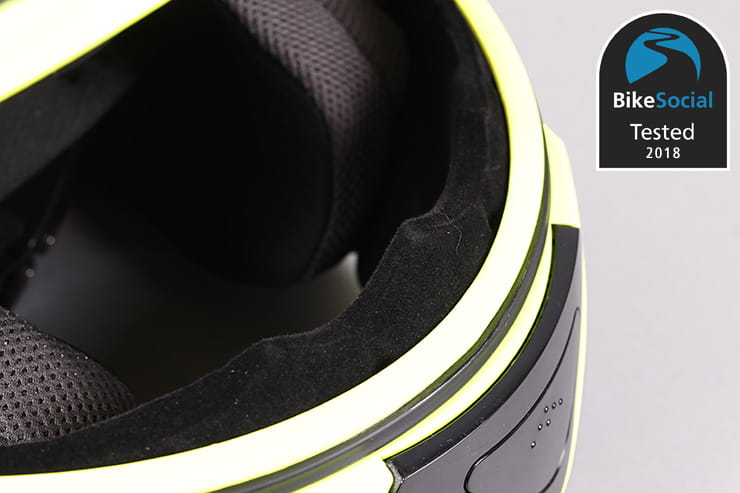 The Spada’s lining is fairly simple to remove and refit, so if you’re using it regularly and need to give it a wash every so often, it’ll be a lot easier than if it were fixed in place. It’s not the most plush, but it’s plenty comfortable enough. 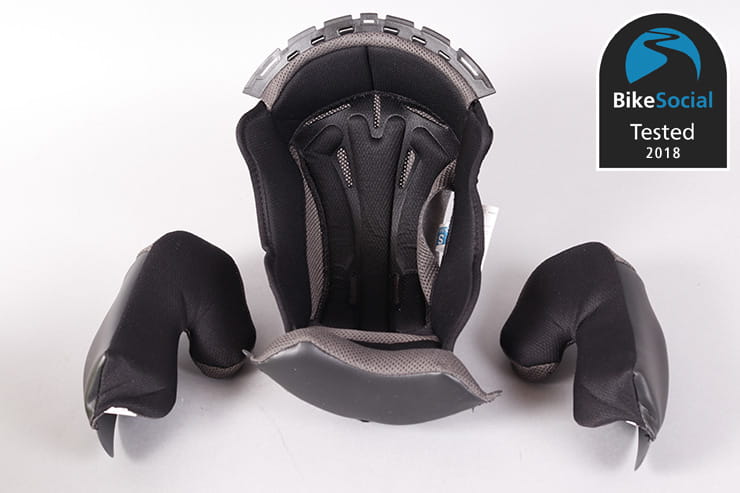 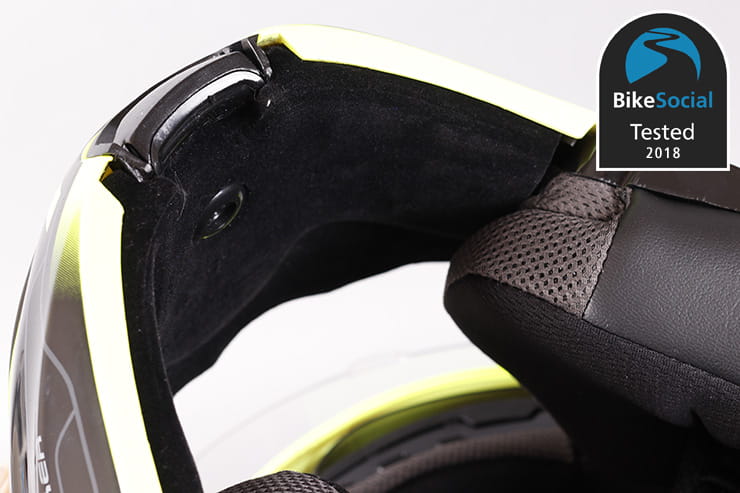 The micrometric ratchet chin strap takes a few minutes to set up at first, but once done will give a secure fit every time, even when wearing gloves. Quick and easy to use, it’s ideal for a lid like this.

Comfort and fit is of course very subjective, but this is the reason why I took this helmet over from Steve. Labelled inside and out as a small, it was very loose around the sides of Steve’s head – I found it roomy on my medium-sized dome.

While this fits well otherwise, it puts a pressure point on my lower jaw where the strap is, likely due to it being a small. With sizing so hit and miss on this Spada, it’s very important you try one on for yourself before buying.

I wear spectacles for riding, and had no problems with them here. 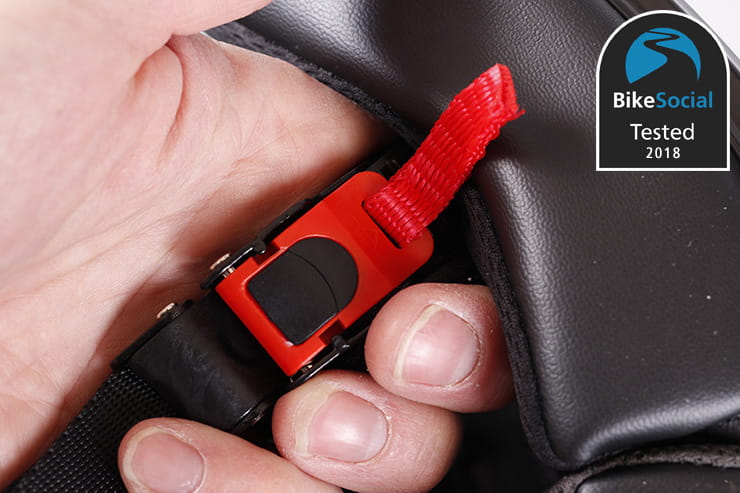 Flip-front helmets tend to be louder than a full-face, but I’d say this is a little louder than the average such design, but not excessively. As with any lid, earplugs are essential to avoid long-term damage.

If it fits you, the Spada Reveal is a budget-friendly flip-front. Unfortunately, the odd sizing, poor ventilation and leaky visor will limit its appeal to many.