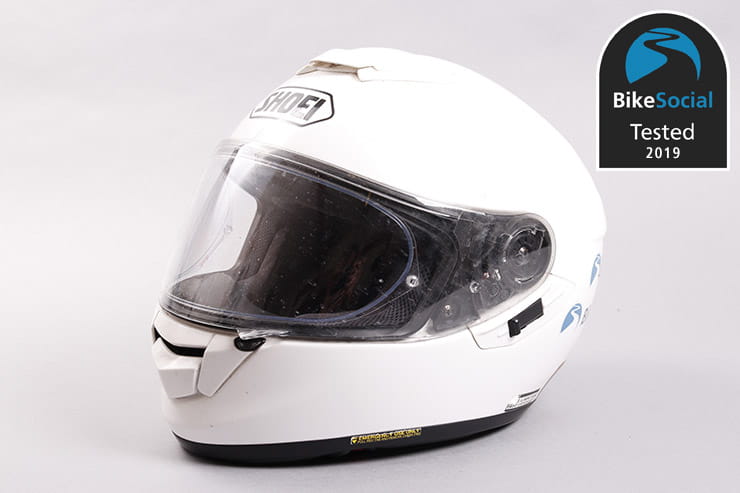 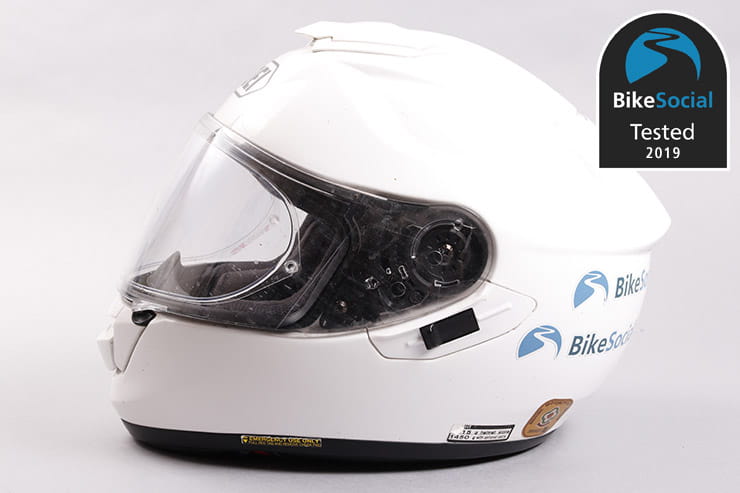 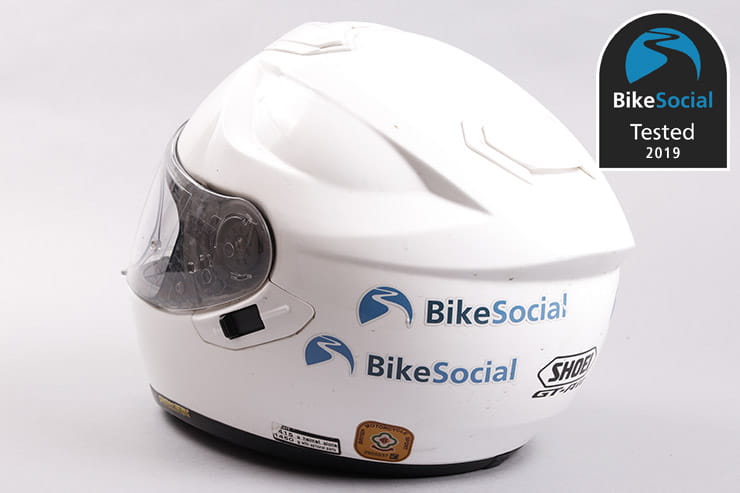 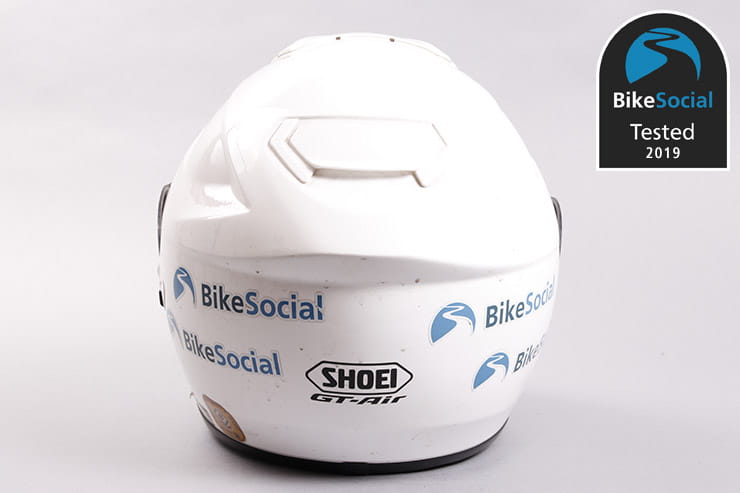 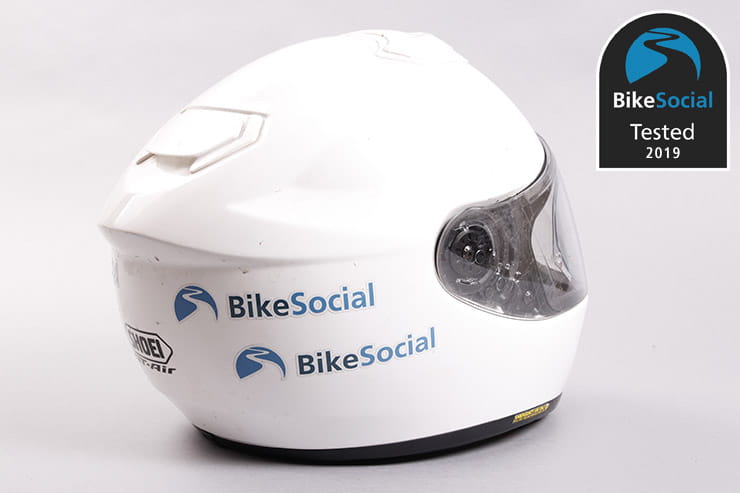 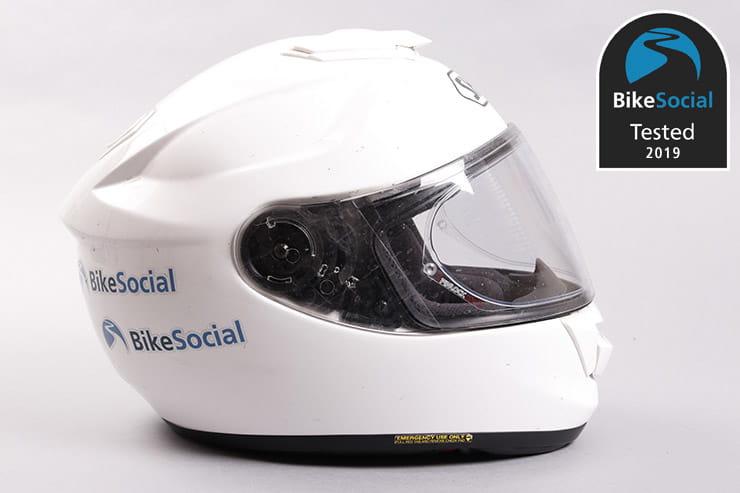 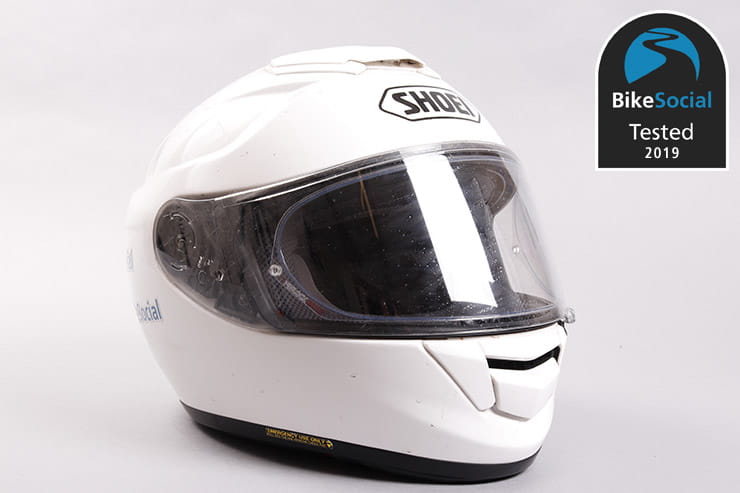 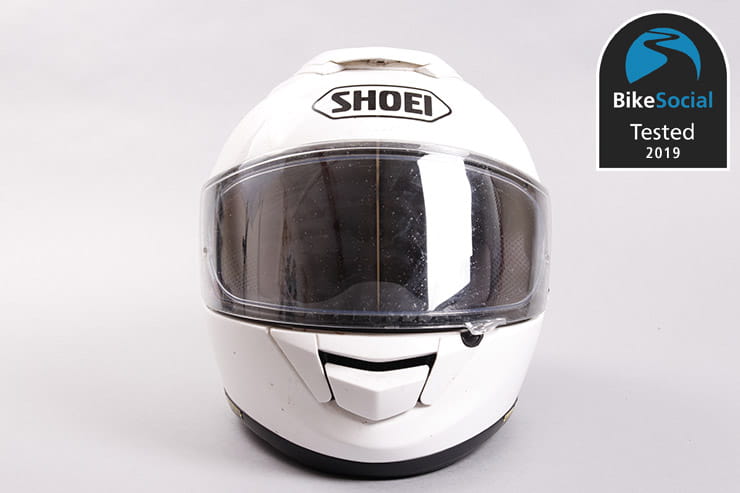 I’ve always preferred simple in pretty much everything, including bike kit. And while others might love their flip-top, Bluetooth, drop-down-sunvisored bike helmets, I’ve tended to steer clear. But as a working rider I do a lot of miles in all weathers and all seasons too. So, for a day-to-day lid I gave in last winter and decided to go for something that didn’t need a different visor for going home than going to work. I’d been wearing an old Shark Speed R helmet that did the drop-down sunvisor thing but was also noisy and windy inside meaning my eyes were still streaming from the airflow not the sunlight.

Shoei’s GT Air is their non-flip, touring lid. Still made like a proper Shoei should be and still packed with smart construction techniques and clever design meaning that fitting the sun visor doesn’t reduce the front safety absorption protection.

In 15 months use this helmet has been tested on everything from small naked bikes through to supernakeds. Adventure bikes of all sizes, cruisers, tourers and sports tourers. It’s done 12-hour days in blistering summer heat and freezing winter treks round the M25. It’s an all-round helmet that’s had an extended all-round test.

Shoei’s AIM shell builds layers of glass fibres with organic fibres and polyester resin to build a strong, light construction. There are three shell sizes and seven different helmet sizes available. Shoei talk a lot about active and passive safety, which is how being comfy and clear-headed prevents accidents (passive), but should you have one, the quality of the helmet will protect you (active)

First impressions are that it’s noticeably heavier and bulkier than my previous Shoei NXR. The design is sleek, and the coloured versions look a lot sportier than this plain white one. At 1467g the GT Air is 157g (more than ten per cent) heavier than the NXR. That’s still lighter than most Arais though 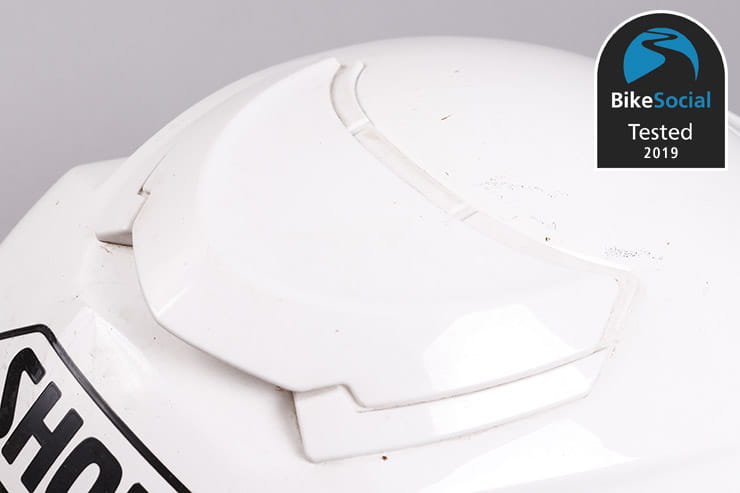 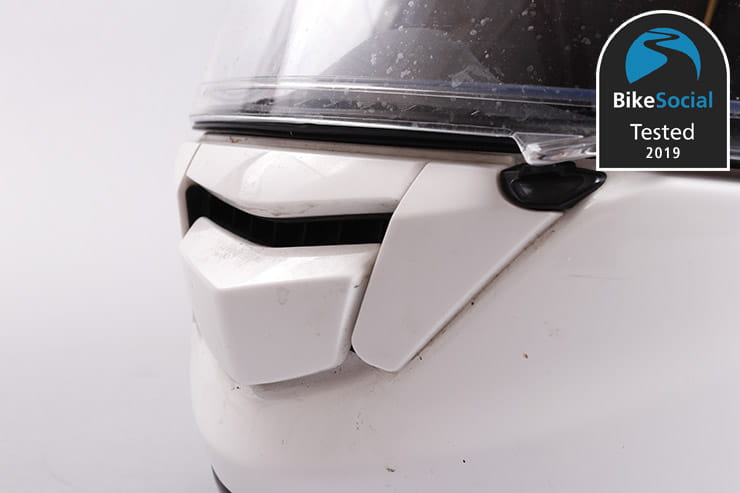 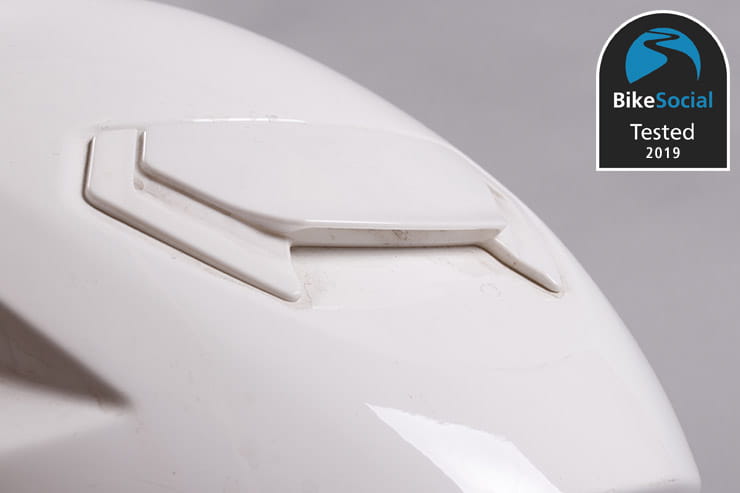 One big top vent, one in the chin and one big exhaust at the back work ok, but not as well as the ones on the NXR. Maybe that’s an unfair comparison – the NXR’s vents are particularly good and most other lids are similar to this one. I guess routing the airflow around a built-in sun visor must be tricky. The GT Air’s vents are much simpler to operate with bulky winter gloves though as you’d expect of a helmet designed for use in all seasons. In warm weather I stay cool enough, but opening the vents isn’t like switching on the air-con like it is on the NXR. 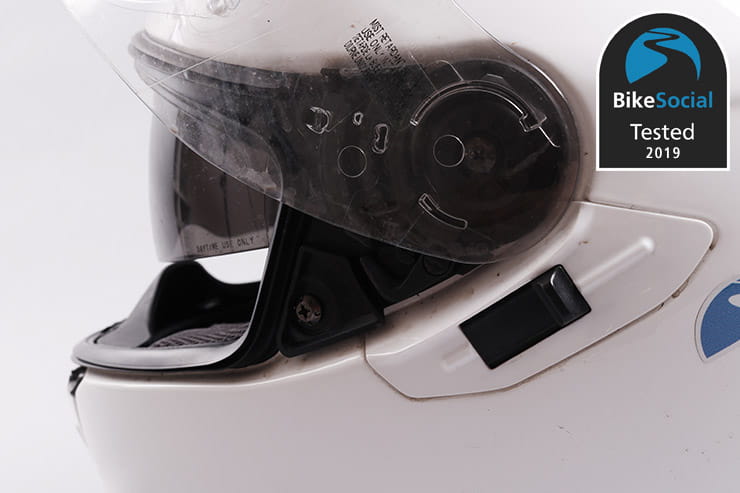 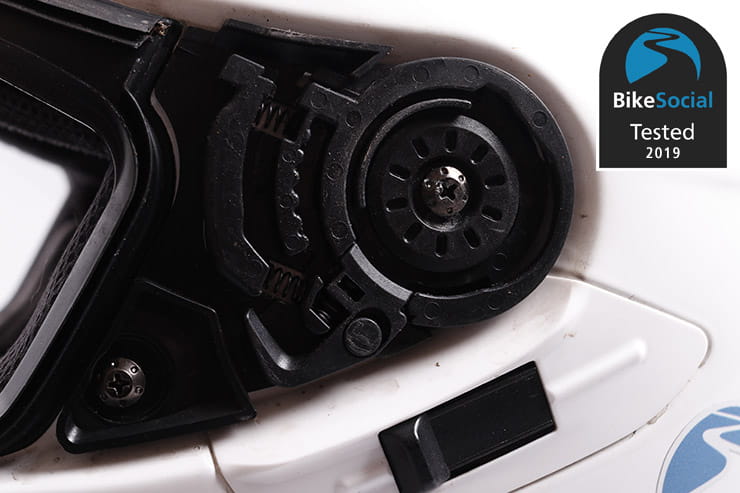 There’s a wide field of vision, no fogging with the Pinlock fitted and the chin curtain keeps it draught-free even on the coldest winter mornings. The visor stays down at high speeds despite not having a physical clip like many other lids, but it is also simple to lift for a quick blast of fresh air.

The sun visor operates via a simple lever and is reasonably effective at taking the edge off bright sunlight but nowhere near as good as a proper dark visor. Also, when first dropped down it tends to mist badly, even in summer, despite being claimed to be anti-fog. After a couple of minutes, it clears and other drop-down visor lids I’ve worn have done the same, but for this price, from this manufacturer, I expected better

Visor removal and replacement uses a slightly more complex mechanism than other Shoeis. There’s a clip on the visor that has to be engaged with some force, adding time and bringing a small worry about breaking it. If you’ve been used to an Arai, then the GT-Air’s visor change will seem like the easiest job ever, but if you’ve come from another Shoei, you’ll wonder why they changed something that previously worked so well. 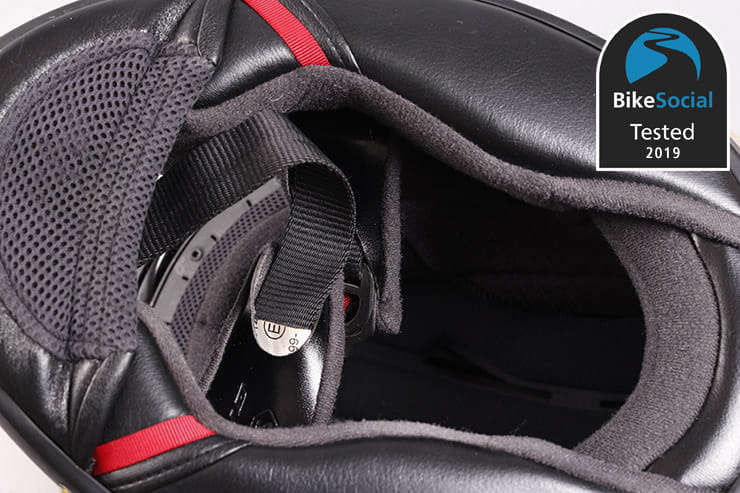 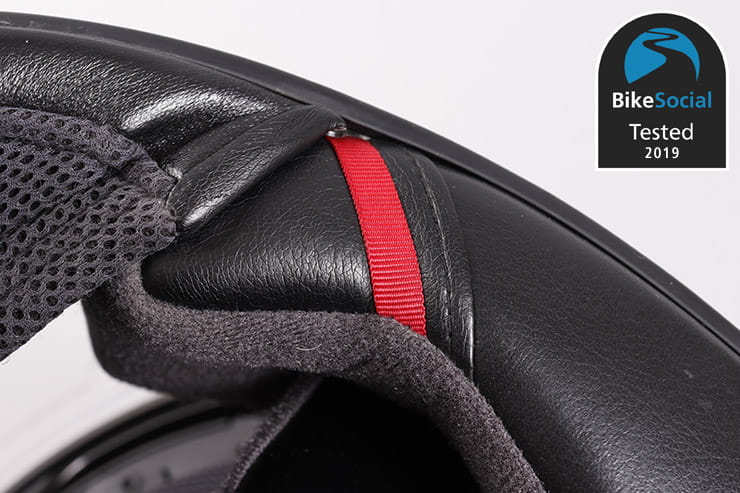 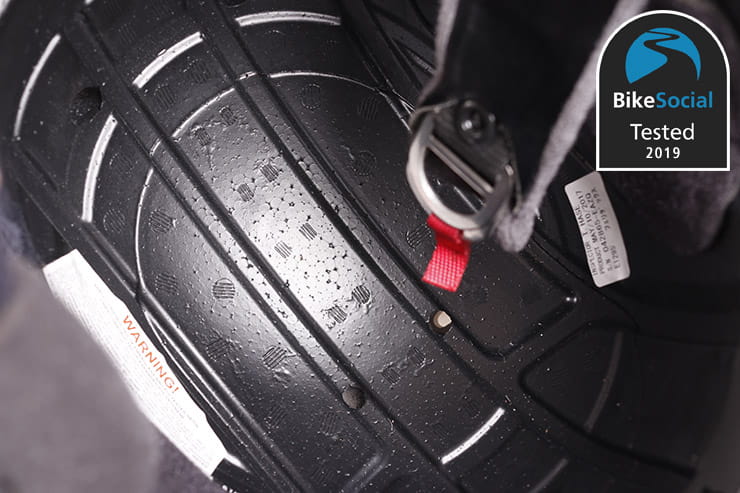 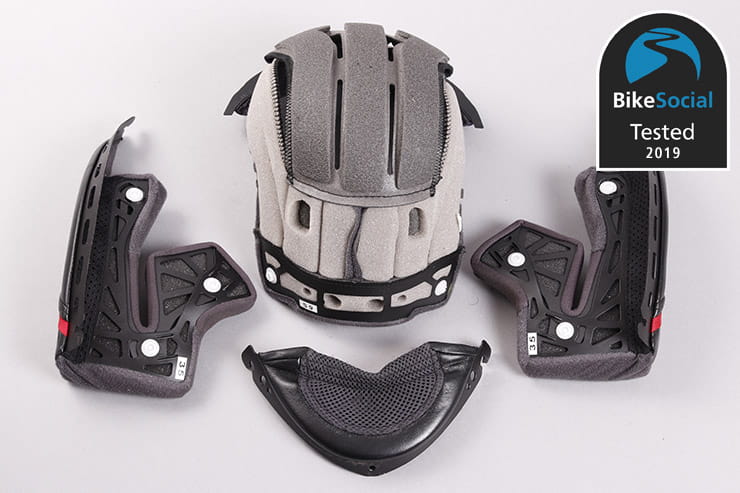 Clearly designed for touring, not racing with a softer feel than the sportier helmets. But somehow the GT-Air’s lining isn’t as lovely and welcoming to stick your head in as other Shoeis, Sharks or Arais, especially on the forehead. It’s not uncomfortable, although very long days in the saddle in very warm temperatures are less comfortable than my Shoei NXR.  I regularly wear this helmet for multiple two-hour stints (tank range is irrelevant at my age, it’s the two-hour bladder range that plans my routes) on a long day and have never had a problem with it. The lining absorbs sweat well and wicks it away. Hopefully I’ll never need the emergency tabs that allow quick removal, but it’s good to know they are there. 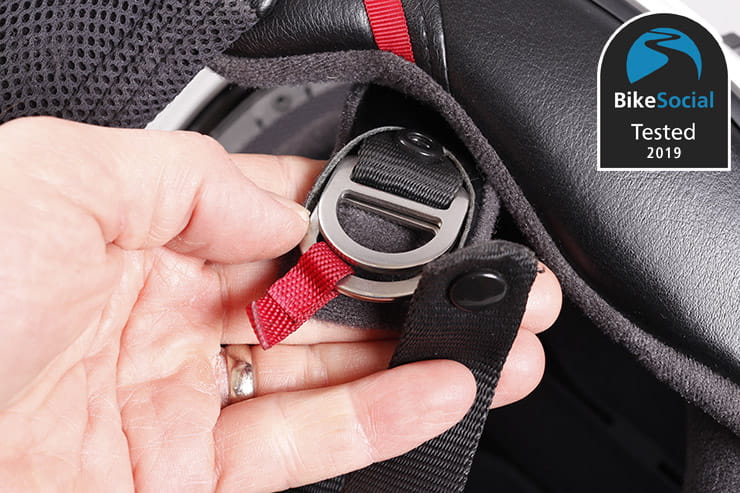 A simple, but sturdy and effective double D-ring strap is easy to use with cold hands, hasn’t frayed despite being exposed to all manner of flapping Velcro, has a simple-to-locate popper to tether the loose strap-end and gives absolute confidence that it won’t come loose.

It’s a snug fit but easy to get on and off. Shoei helmets fit me particularly well and out of the box this one has no pressure points, no gaps and once done up, it doesn’t move.

I’ve done around 10,000 miles in this helmet, most of them long trips, at least half of them in foul weather and I have yet to find a serious fault with it. The drop-down sun visor works well once it demists itself, but at this price that shouldn’t happen in the first place. The easily removable cheek pads for emergency workers are an essential feature and the chin curtain stops draughts making my eyes water on cold, damp mornings. The visor opens easily but locks shut and never pops up at speed, vents can be easily opened or closed even in thick, winter gloves and the strap is both comfy, soft and easy to undo with frozen, winter hands.

If you’ve read my review of Shoei’s NXR, you’ll notice that most of those words are identical to that one. As a helmet I prefer the NXR, but as a practical, year-round working lid, the GT Air’s sun visor and easy-to-use vents mean it has become my regular choice. There’s a new model due for 2019 that boasts a number of subtle improvements including a larger sun visor. BikeSocial will be testing one shortly, but for now, you might get a good deal on the 2018 model before the new stock arrives.