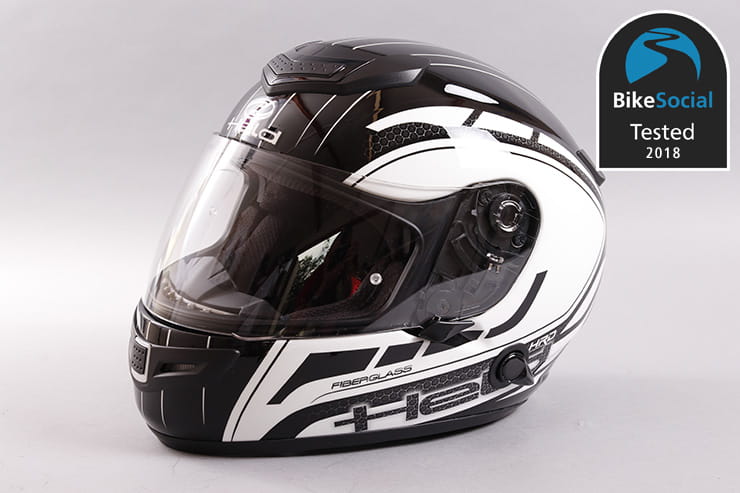 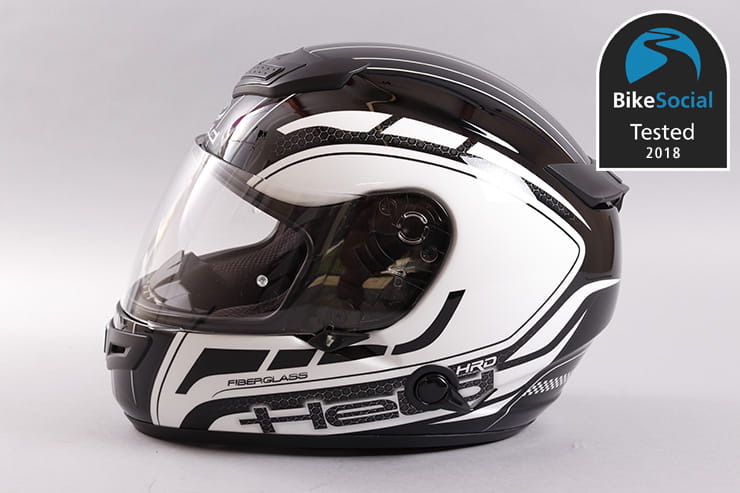 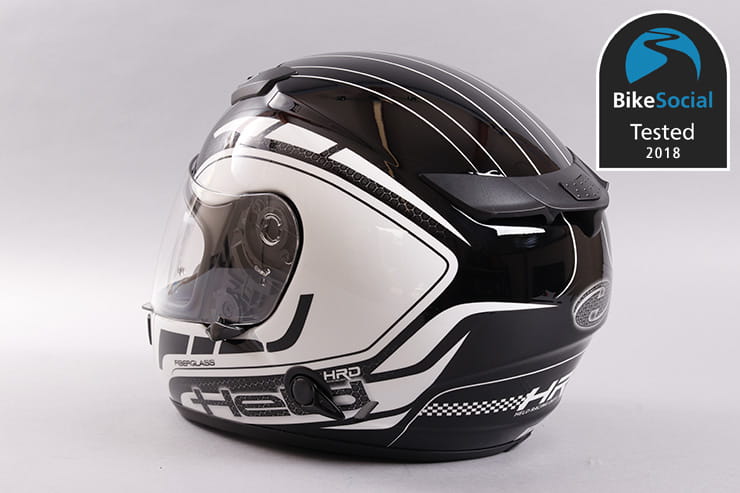 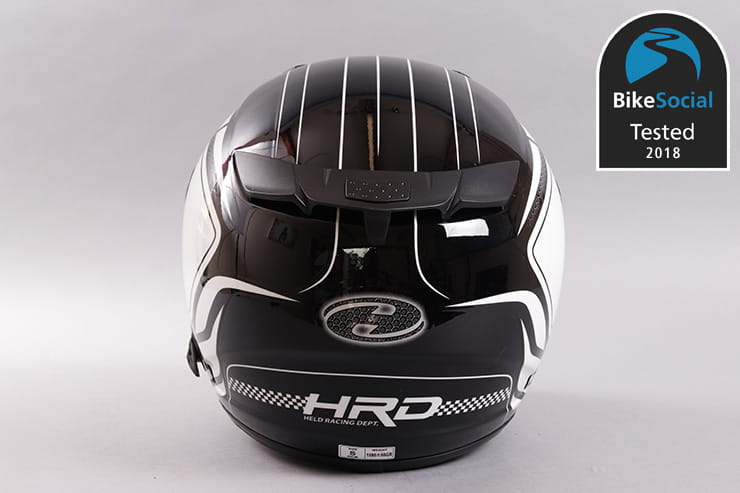 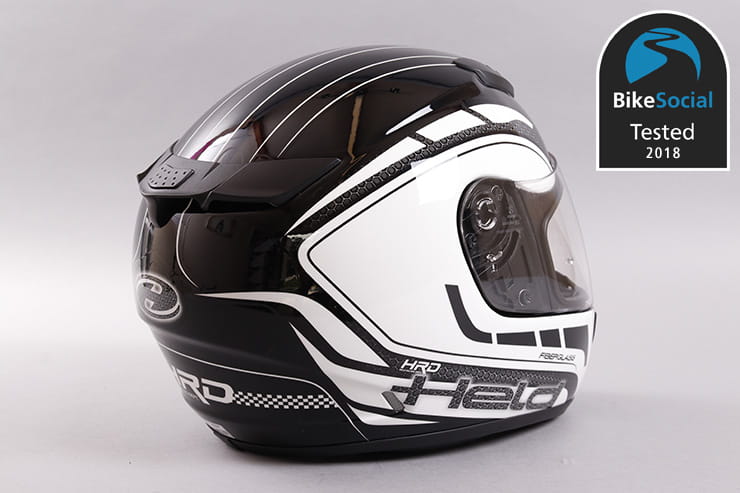 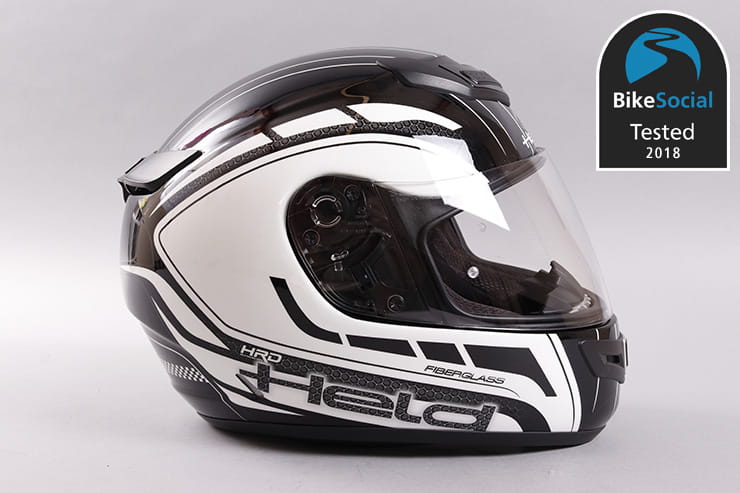 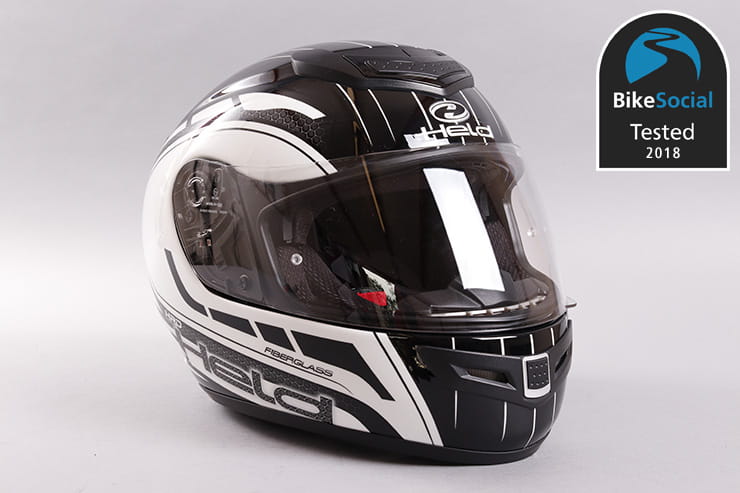 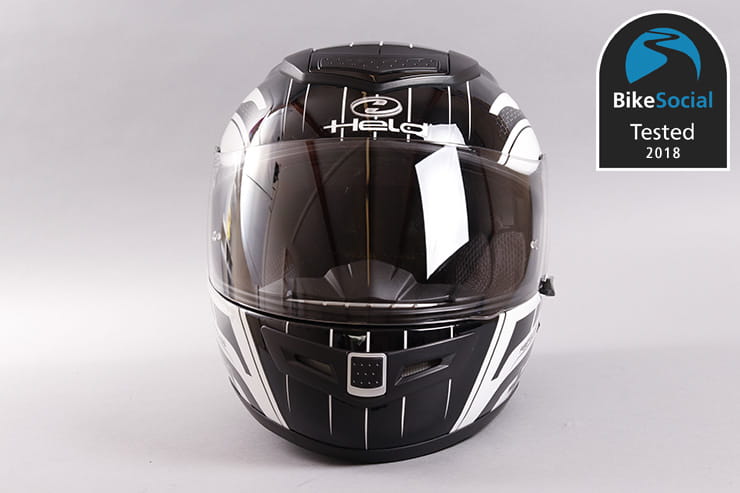 At £122.99 for plain colours, or £131.99 for graphics, the Held Brave II is a relatively affordable lid that I’ve been using for commuting and pleasure on everything from a Honda CG125 through a Triumph Tiger Cub to a Ducati Multistrada…

The Held Brave II has a fibreglass shell – something typically found on the more expensive lids, rather than polycarbonate. Ours had a lovely deep shine over the sharp graphics; combined with the matt-plastic soft-grip vents, it’s a helmet that looks and feels a lot more expensive than it actually is.

At 1581g for this medium-sized lid, it’s fairly light for a fibreglass shell. By comparison, a much more expensive Arai Quantum ST weighs 1646g. 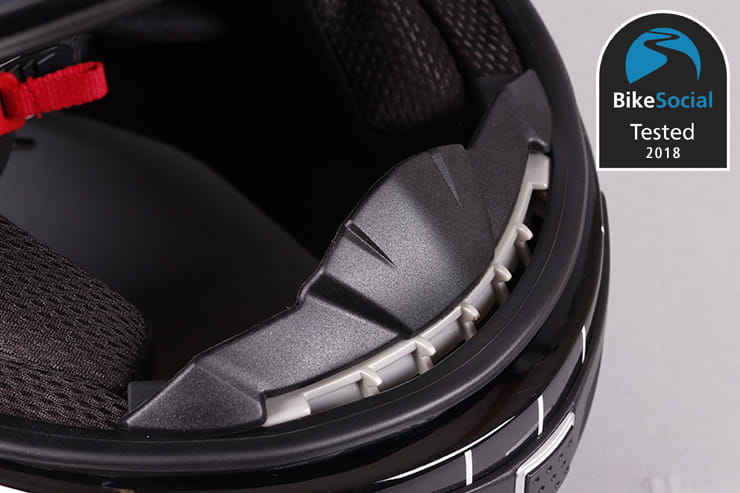 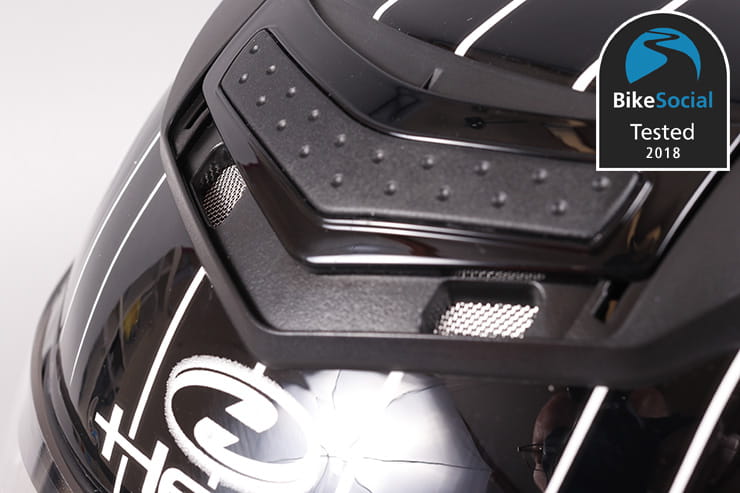 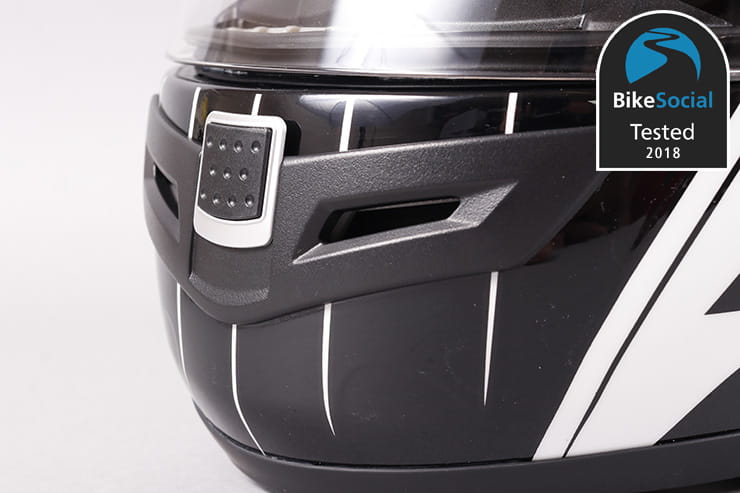 The two vents on the top are closed by a single slider, as are the two on the chin. The exhausts on the rear are always open, and fed by deep channels in the polystyrene inner shell.

I was impressed with how well the top vent works as it’s both easy to find and use, and provides quite a bit of cooling air through to the interior. The front vents are less noticeably effective, but they’re just as easy to use with summer or winter gloves on.
The small chin skirt means the interior is very still at speed, with enough air moving around to prevent misting. 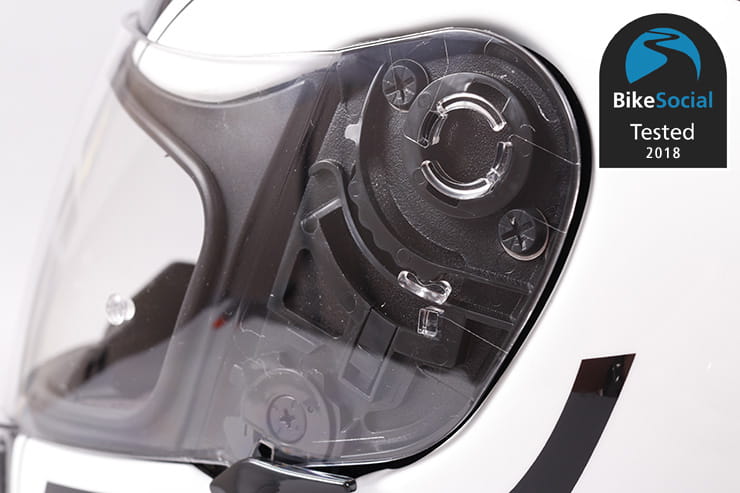 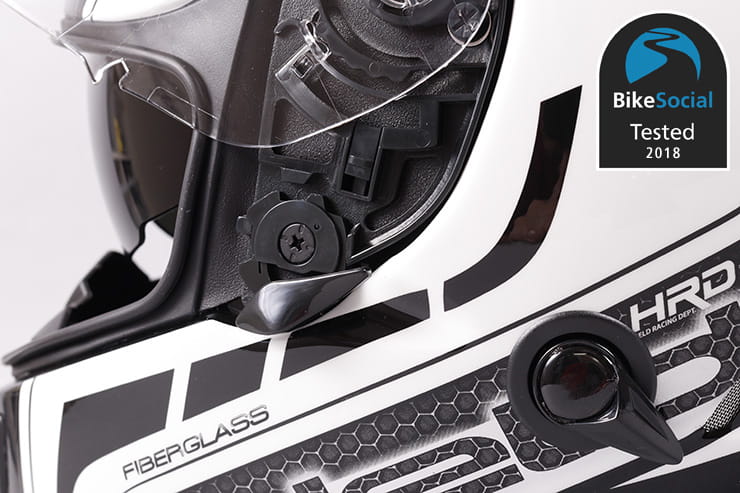 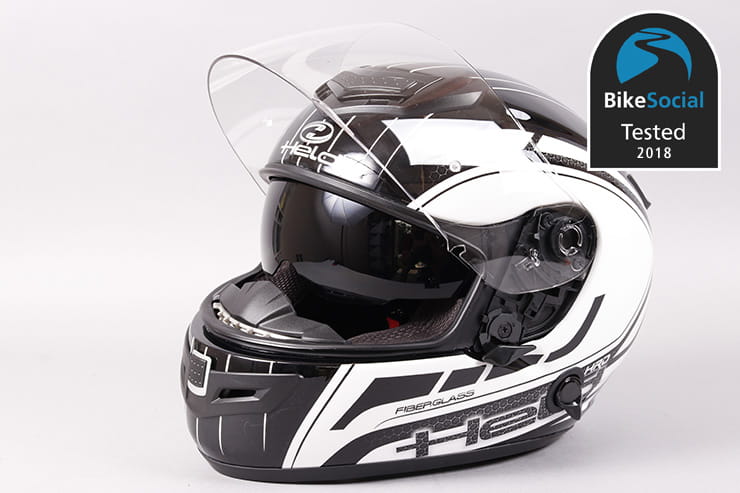 The view from the visor is good at the sides and down to the dash – while it can accept a Pinlock anti-fog visor, one isn’t supplied. It can be cracked open to aid ventilation and reduce misting, or locked down fully with a latch on the left, but I never felt the need to do this.

Out of the box, the top edge of the visor seal leaked a fair bit in heavy rain. There’s a small amount of adjustment in the mounting plates, which did reduce it, though there was still some leaking at the front.

A drop-down sun visor is built in, operated by a neat lever that rotates down to deploy, then springs away automatically at the touch of a button. The visor comes down just to the bridge of my nose and seals light out fairly well – I don’t usually like these things, but this is one of the better ones I’ve used. 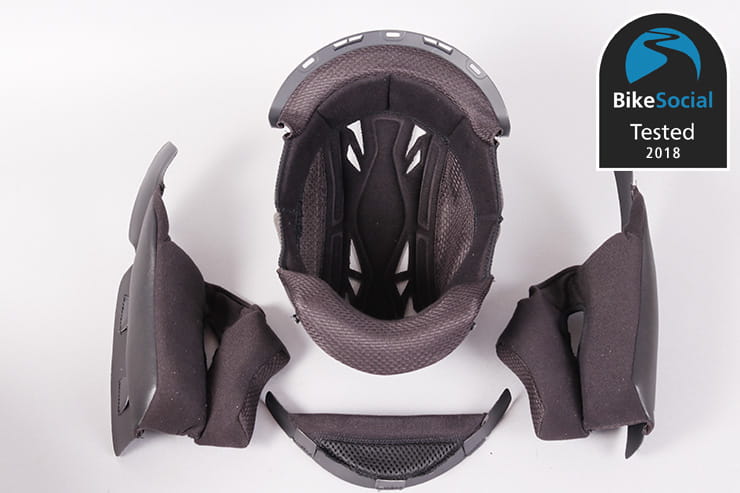 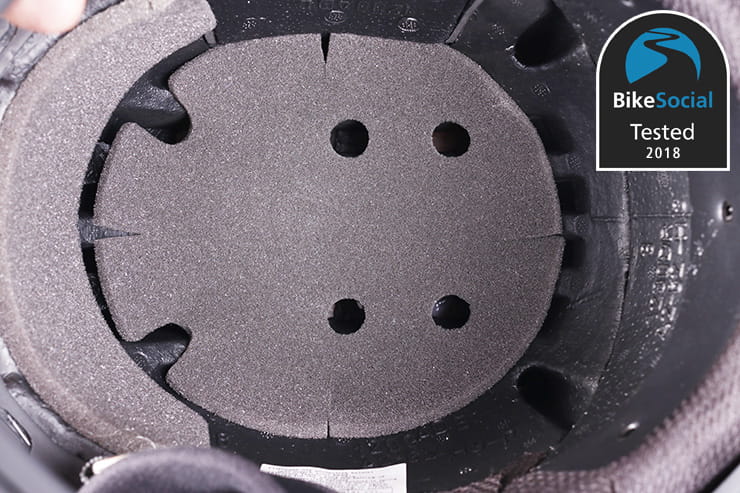 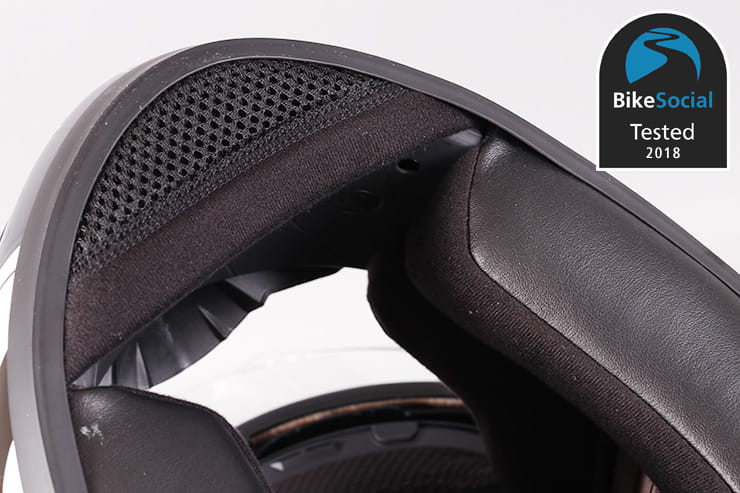 The lining is fairly easy to remove and refit for cleaning, though one of the catches on the right cheek pad did pull out of the polystyrene when I did it; this would be covered by the warranty. 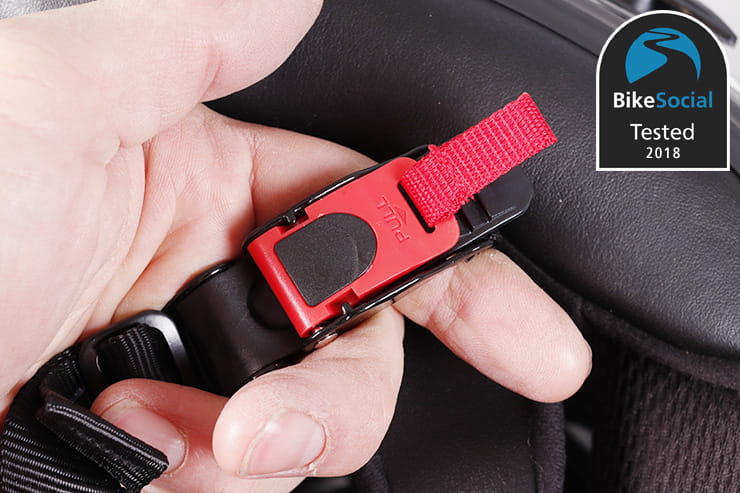 The micrometric ratchet adjuster takes just a couple of minutes to set up at first, then you have a very easy-to-use and secure fit every time, even when wearing gloves.

Comfort is of course subjective, so always try any helmet on for yourself before buying. For me, the Held is a good fit overall and doesn’t move about when in use. The interior is comfy and soft with a quality feel to the lining, which makes it good to wear for three hours or more in the saddle.
I don’t wear glasses but tried on some thin-framed Ray Bans and found them tricky to put on initially. Once on though they do stay nicely stable, although the arms of the glasses did press on the side of my face – again, try for yourself if you wear specs, just to be sure.

While you must wear earplugs with any helmet, the Brave II is quiet with very little of that low frequency rumble you get from some lids. The vents do whistle a bit when they’re open, but with plugs in, it’s barely audible and not a problem.

The Held Brave II is a very good lid for the money – the slightly leaky visor is the only real disappointment. Considering its price, it doesn’t feel like a budget helmet at all, and I would happily recommend it to a friend.