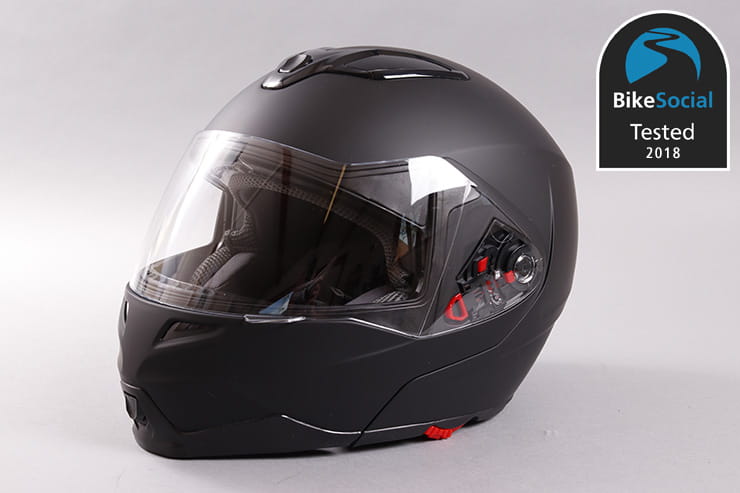 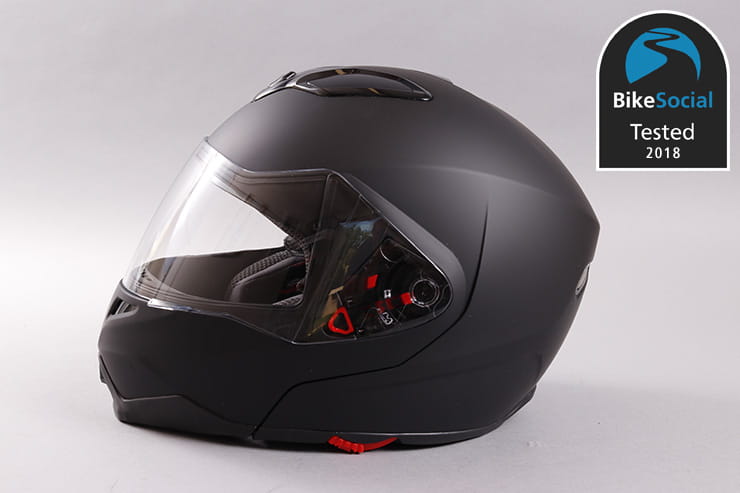 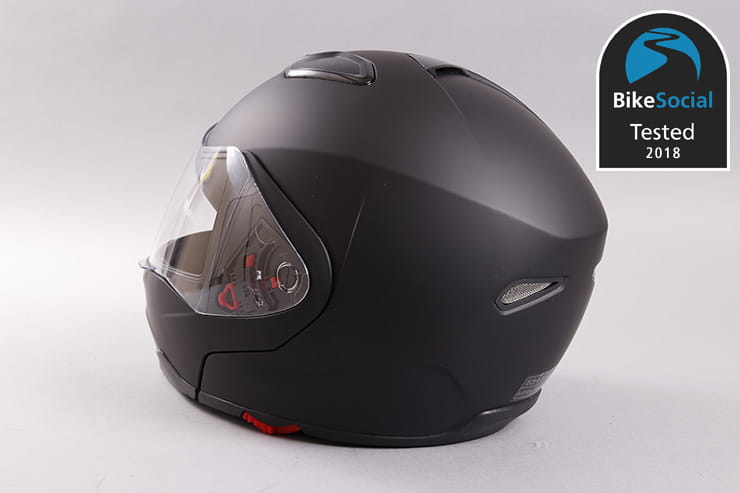 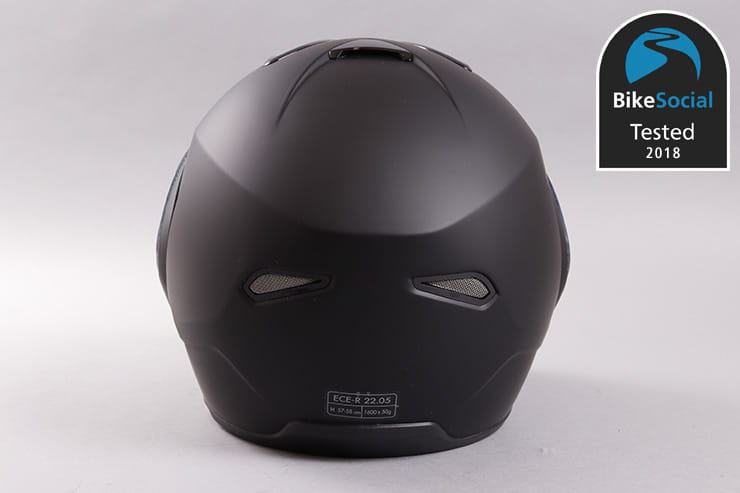 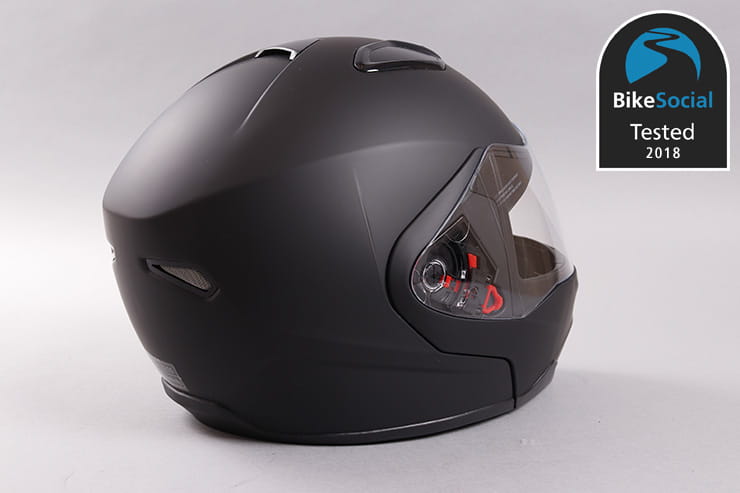 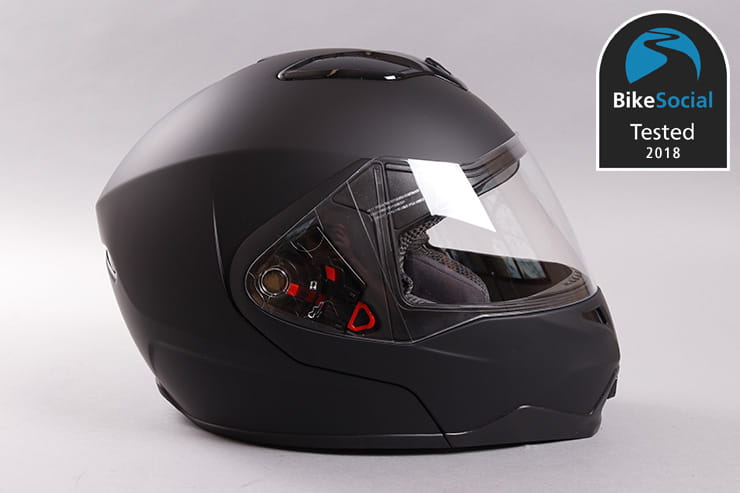 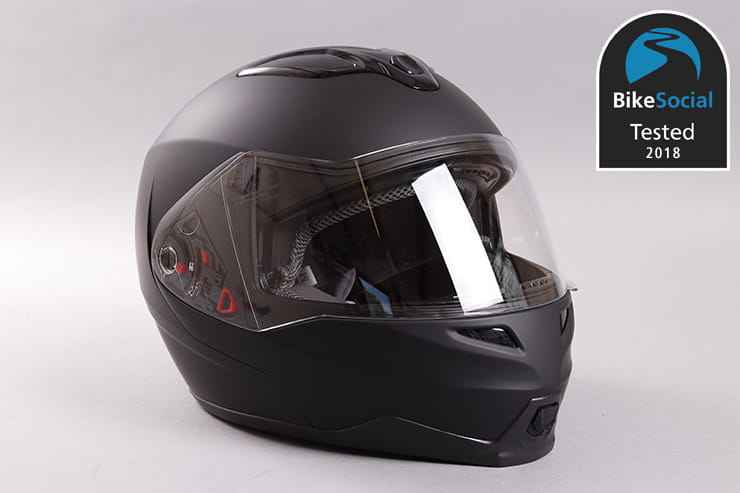 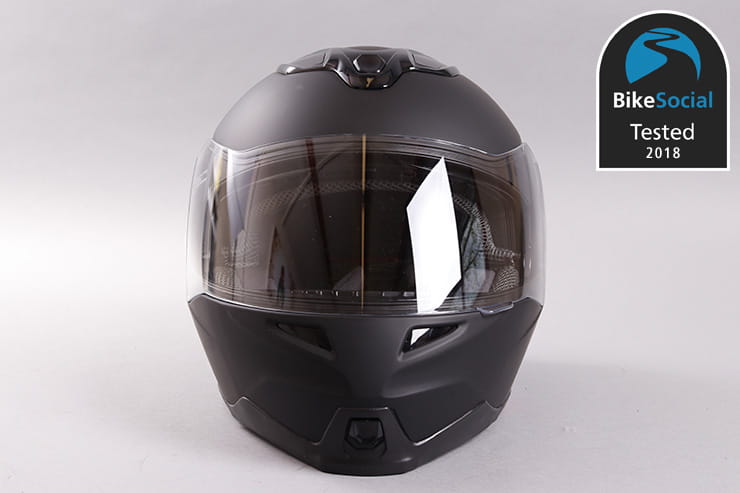 At just £59.99, the GSB G-339 is an incredibly cheap flip-front motorcycle helmet. Ash Dunning, a member of the BikeSocial Test Team, has been using one for two months while riding his Suzuki GSX-S1000F

Finished in matt black, the ABS plastic shell of this G-339 doesn’t look bad for the money, though it has quite a plasticky appearance. The mesh fitted in the rear vents is also quite easily deformed if pressed, though it does stay in place.

At 1640g, this medium-sized helmet is of course heavier than a typical full-face helmet, but it’s relatively light for a flip-front. It’s certainly not going to put undue strain on your neck. 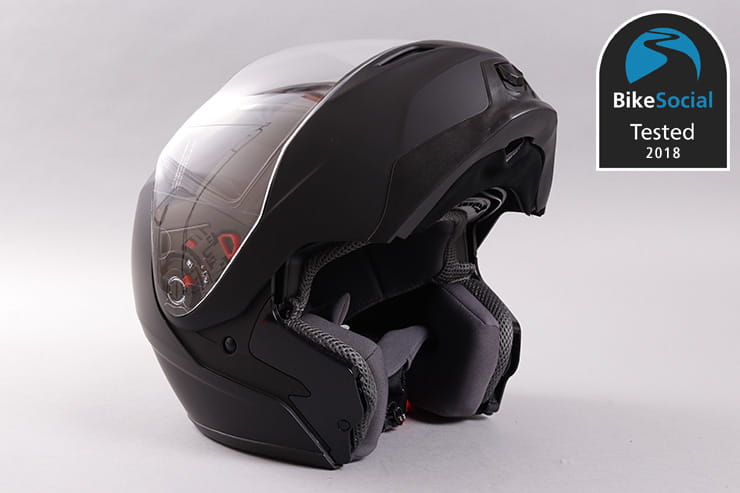 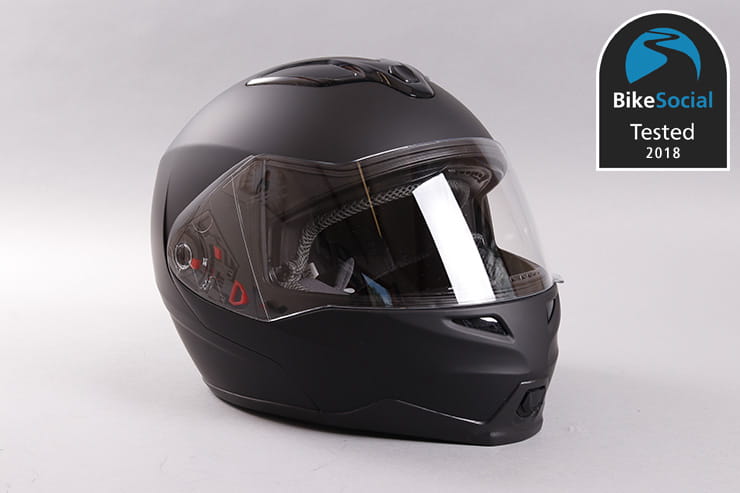 Two vents on the top are opened with a single sliding button, and there’s also another on the very top, though this doesn’t appear to go anywhere inside the lining. A sliding button covers the two chin vents, and there’s a pair of always-open exhaust ports on the rear.

The vents are easy to open and close with summer or winter gloves on, but they have very little noticeable effect when riding. Of course, being a flip-front, you can just open it right up in the heat – while it’s not dual homologated (so only tested for use when closed), the chin stays up securely when riding.

If wearing a neck tube with the chin skirt fitted, the GSB is completely sealed from the elements, so would be very good in colder weather. When not wearing a neck tube, cool air is able to flow to the lower part of my face and nose. Taking the skirt out gives a further slight increase in air flow. 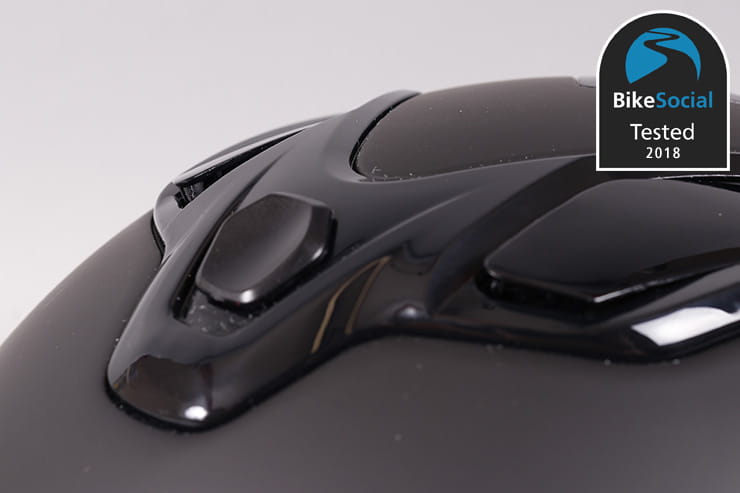 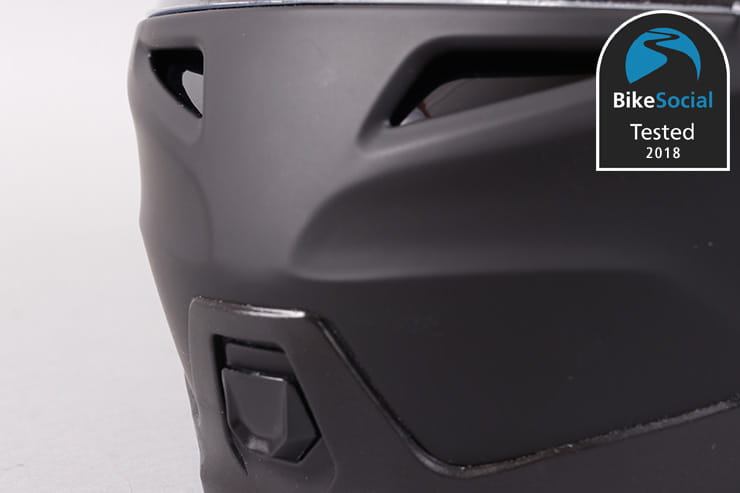 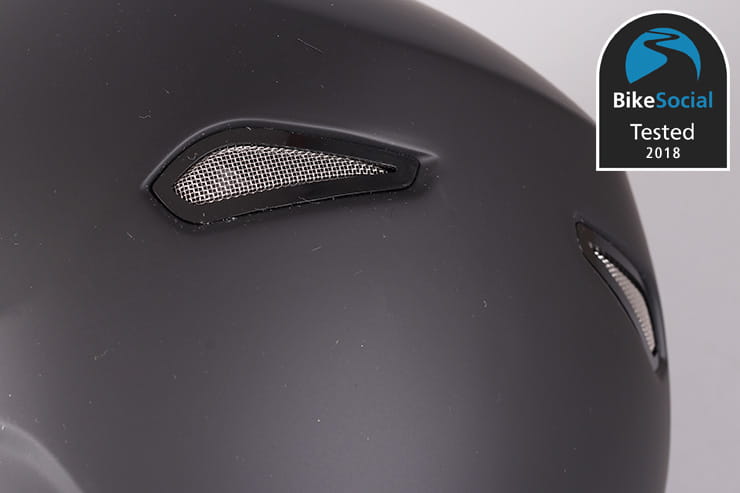 A lever on either side releases the visor easily, and there’s a thumb tab on the left to open it – one on either side, or just one in the middle tends to be a little easier when using your right hand, for instance while holding the clutch in.

The six-stage ratchet is quite sharp, made to feel more cheap and clumsy by the very flexible visor. There’s no option to fit a Pinlock anti-fog insert, so the visor can mist a bit when stationary; it clears fine when on the move, though it can’t be ‘just cracked’ open – the first stage is around 2cm wide.

The tinted sunshield – operated by a thumbwheel on the left lower edge – is very useful, and drops to a good position. I’d prefer one a little darker, but it’s still great for varied weather, especially when touring.

In heavy rain, the visor leaks significantly across much of the top of the seal, and couldn’t be stopped by attempting to adjust the mechanism’s side plates. 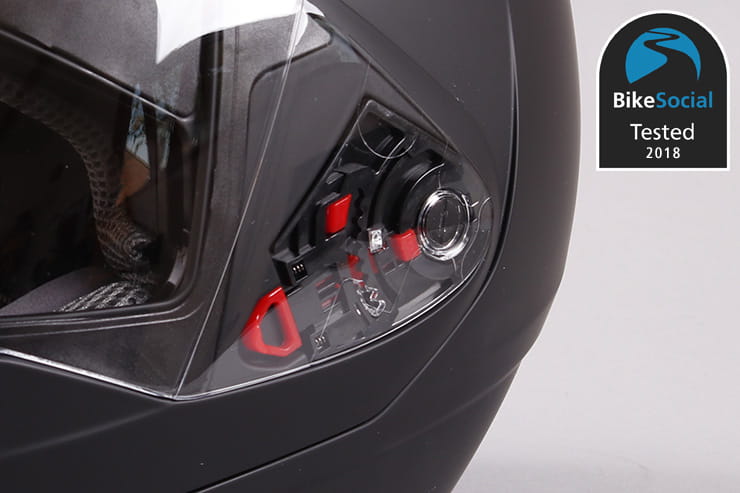 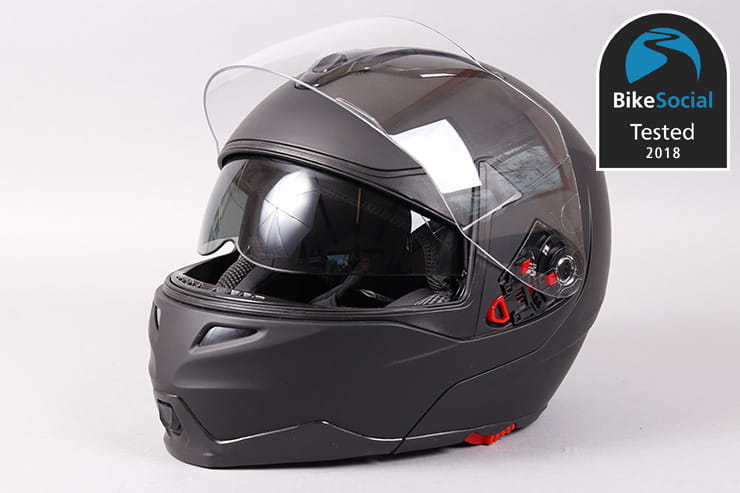 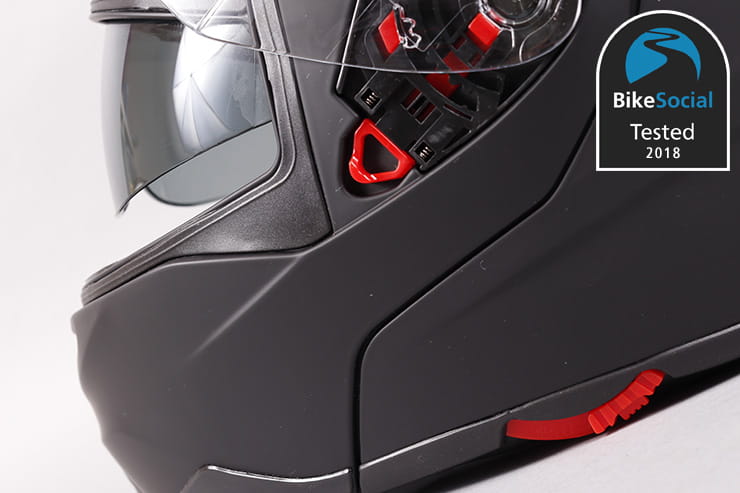 The lining is very easy to remove, though one of the Velcro securing patches – that should be glued into the shell – pulled out with it, showing the hot glue used in assembly. There’s also a thick patch of dense foam hot-glued into the top of the shell that looks a bit of an afterthought and adds to the budget feel of what is, admittedly, a very cheap lid. 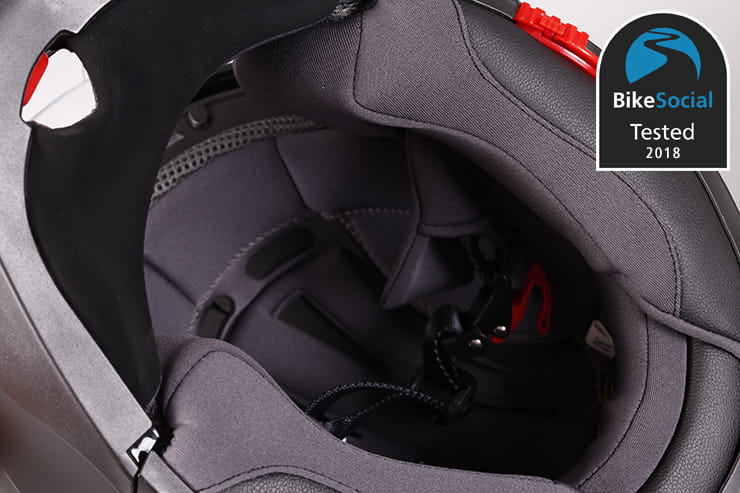 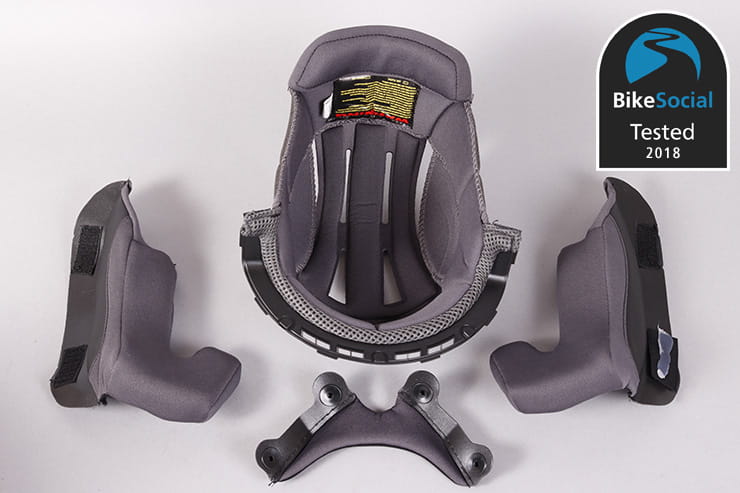 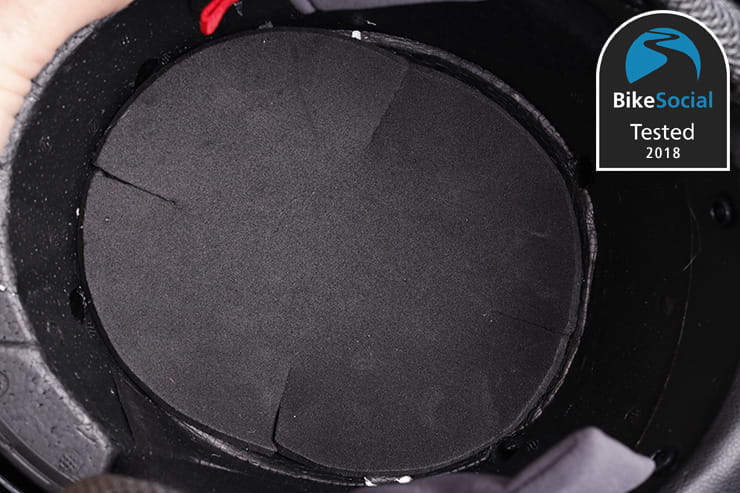 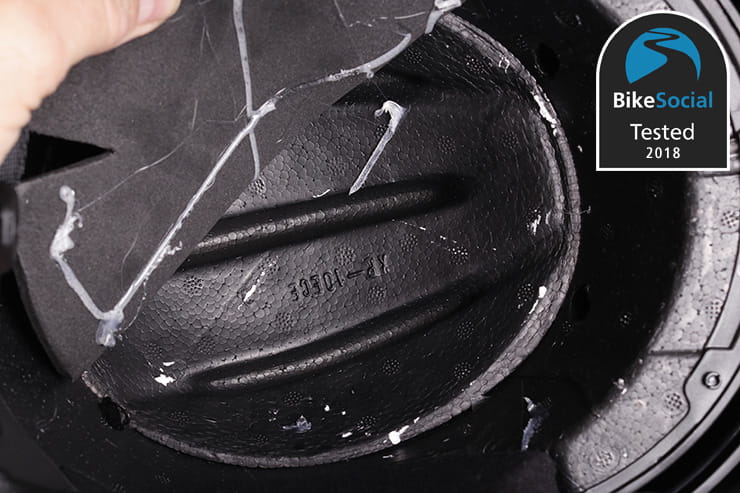 The micrometric ratchet fastener is easy to use with or without gloves, and once set will give a secure fit every time.

Comfort is always subjective, but I found this medium to be very tight – it gripped the crown of my head, and sat on top, rather than around it. With the chin bar down, my chin touches it, and there’s little gap between my face and the visor.

I’m usually a medium, but would likely need a large, so do try one on if you’re considering it.

There’s no channelling for glasses – they will fit, but I couldn’t get them into quite the right position on my nose. 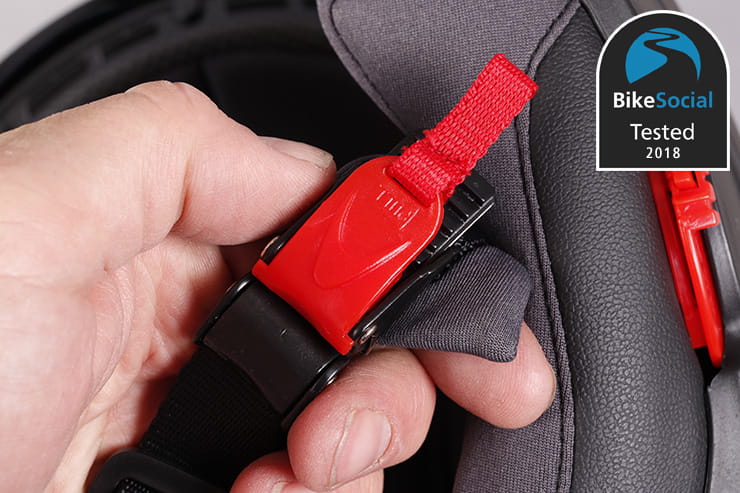 At low speeds the noise levels are quite low, but I could hear a whistling of air coming in at the top middle of the visor. On open roads – as with any other lid – earplugs really need to be worn.

The GSB G-339 is solidly made yet light for a flip-front. Vision is good, the liner soft and it has some good features for the price.

Despite the leaking visor and difficult fit on my head, I’d still recommend trying one on if you’ve got a tight budget.