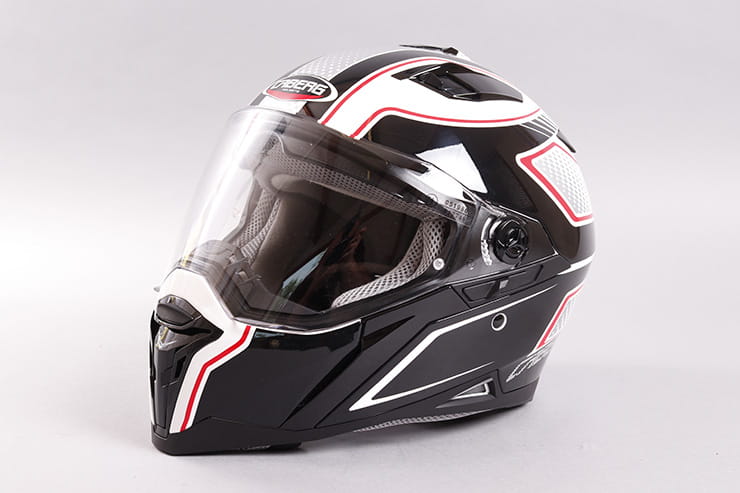 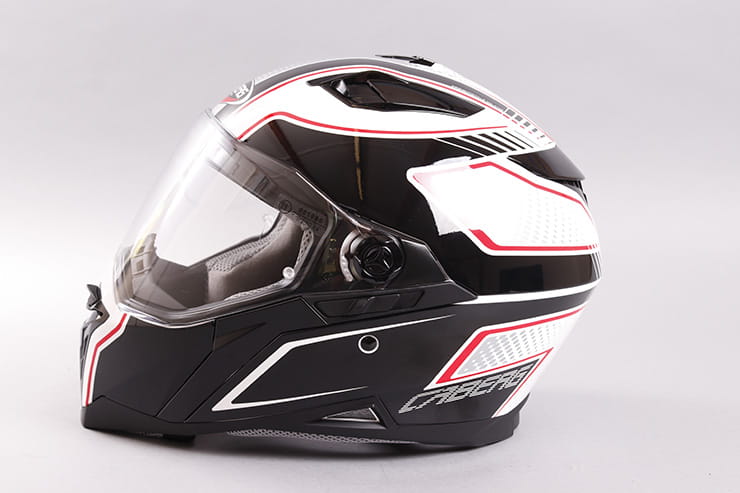 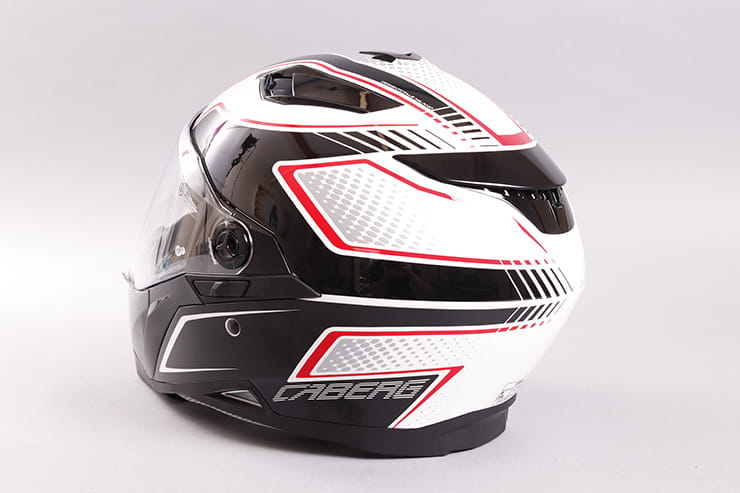 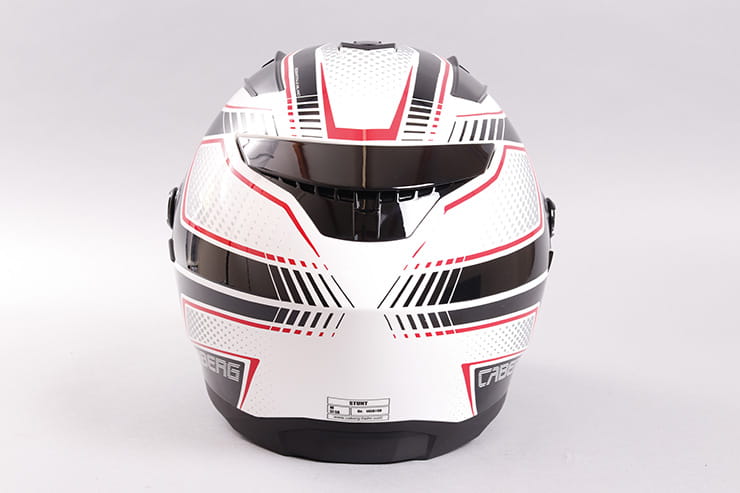 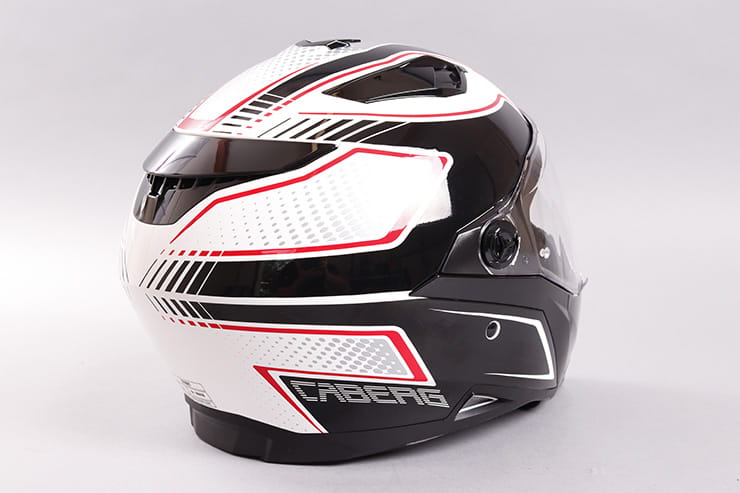 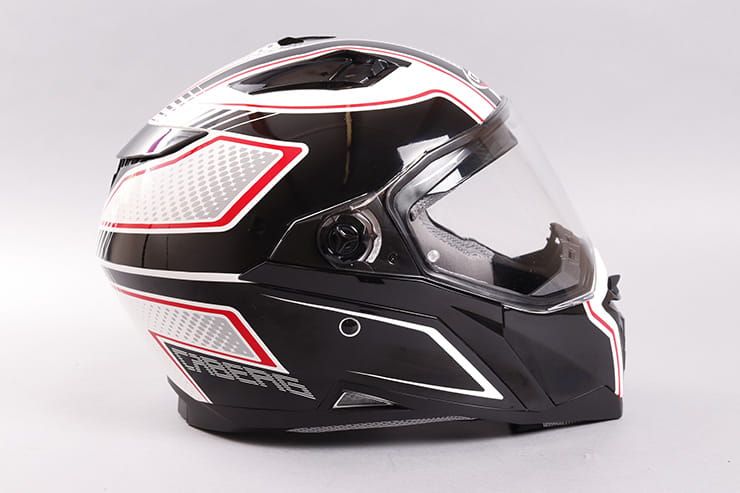 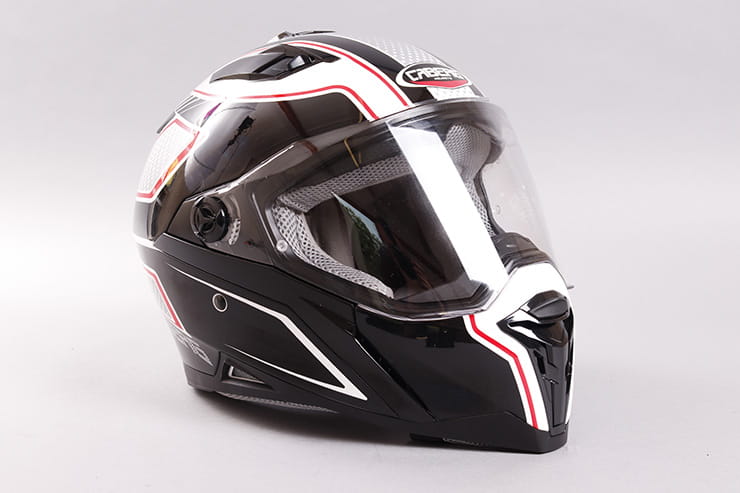 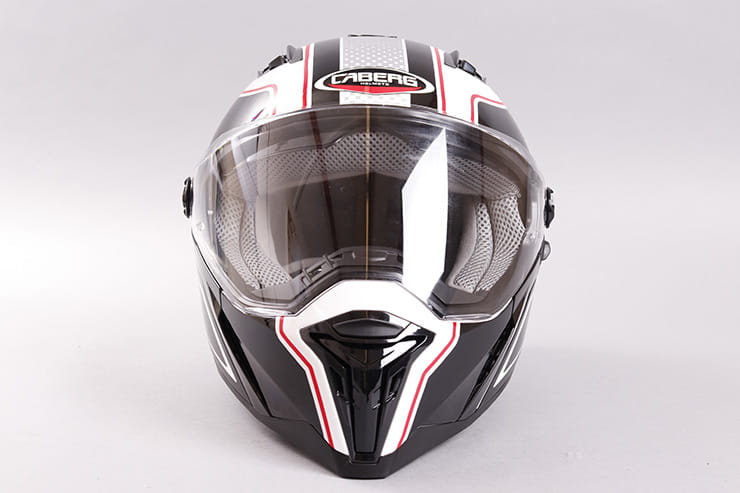 The Caberg Stunt is a relatively budget-priced full-face helmet: starting at £129.99 for plain colours, graphics are available for £149.99. Patricia Stiemke – a member of the BikeSocial Test Team – has been using it for several months on her Honda Deauville…

Available in sizes XS to XXL, this white, black and red ‘Blade’ model is a distinctive shape with well-applied graphics and a nice gloss, though on very close inspection, a few tiny ‘fish eye’ blemishes are visible in the lacquer.

With this medium-sized helmet weighing 1434g, the Caberg Stunt is one of the lighter lids BikeSocial has reviewed. 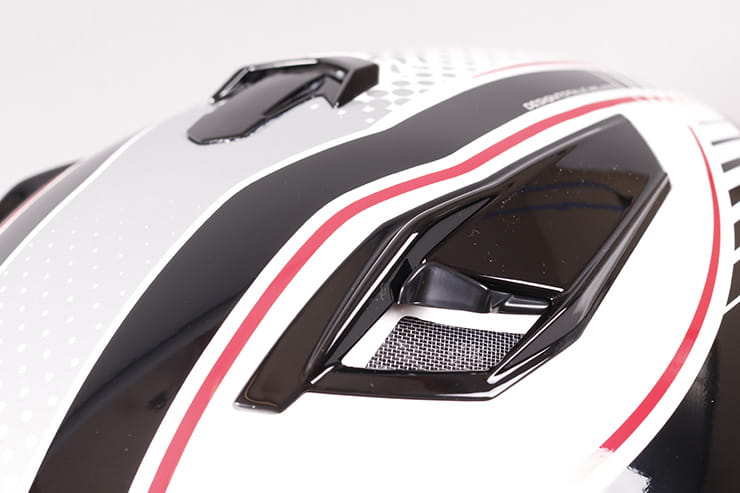 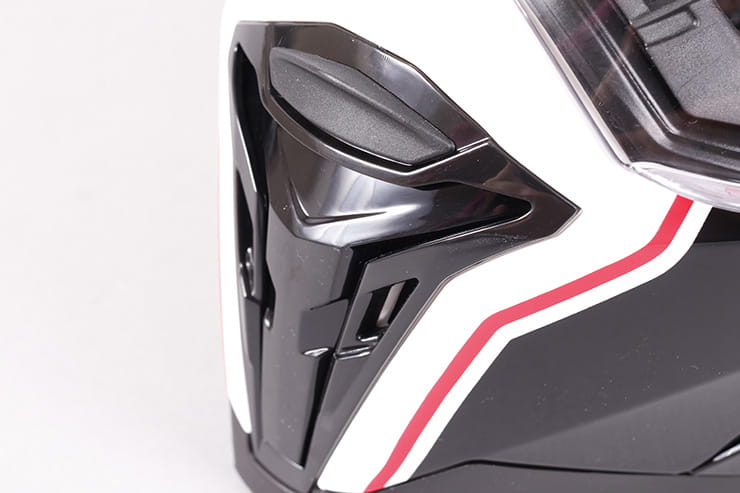 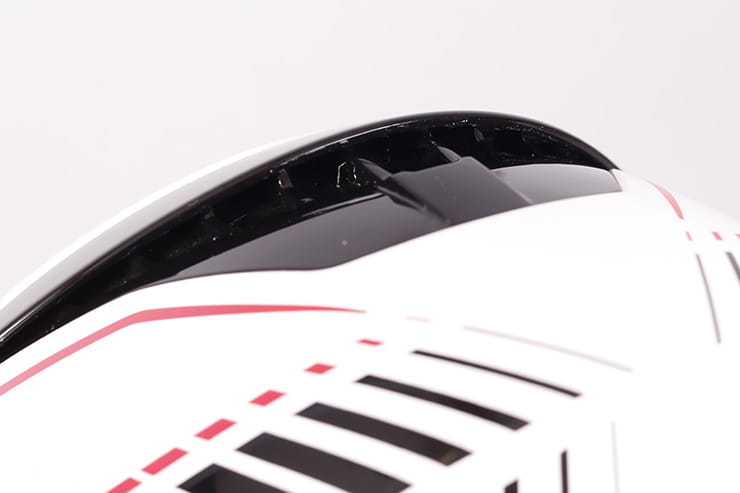 There are two independently-closing vents on the top, with another between them, though it’s not clear inside the helmet where this leads. There are deep channels inside to help move air around.

The chin vent is opened by pressing it in, then the lever above is slid up to close – a neat design, and regardless of glove thickness I found it (and the top vents) easy to operate. When open, there’s a noticeable increase in air, but the ones on the top of the helmet (which feel a bit cheap and rattly) seem far less effective. I also found the air (and hence dust) tends to get blown into my eyes at times when riding with the vents open.

The mesh chin curtain is quite thin but extends inward more than on other helmets I’ve tried, and offers some protection from air turbulence around the front of the neck and chin. Unfortunately, it doesn’t stay put over time; the whole piece slides out of its fittings too easily, so I ended up having to secure the curtain with tape after about two months. 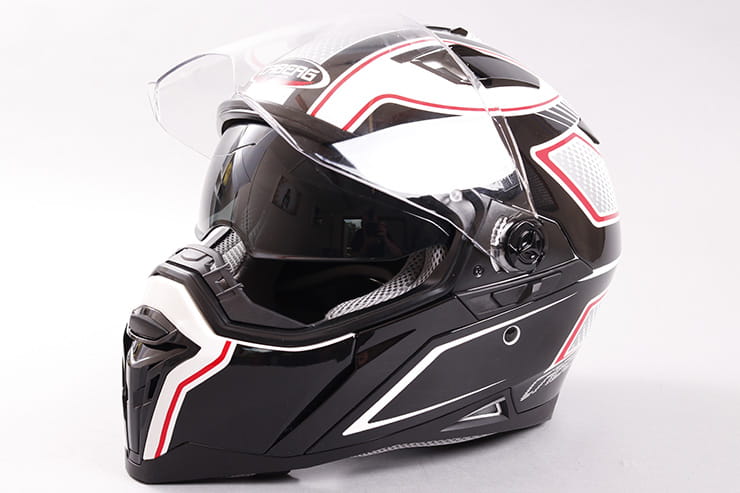 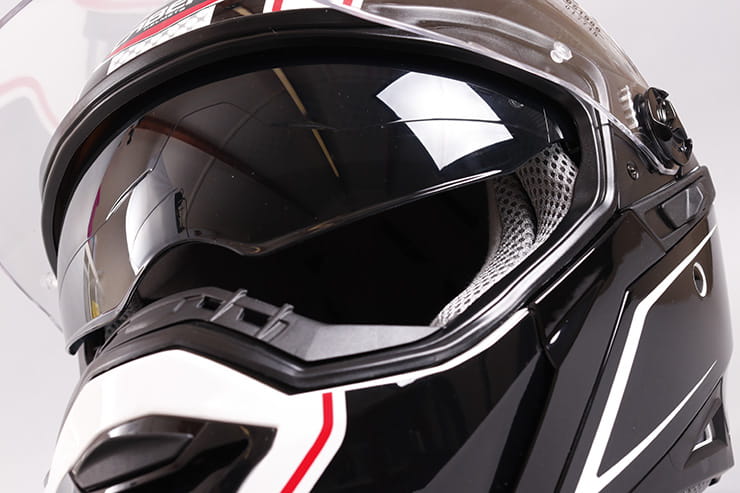 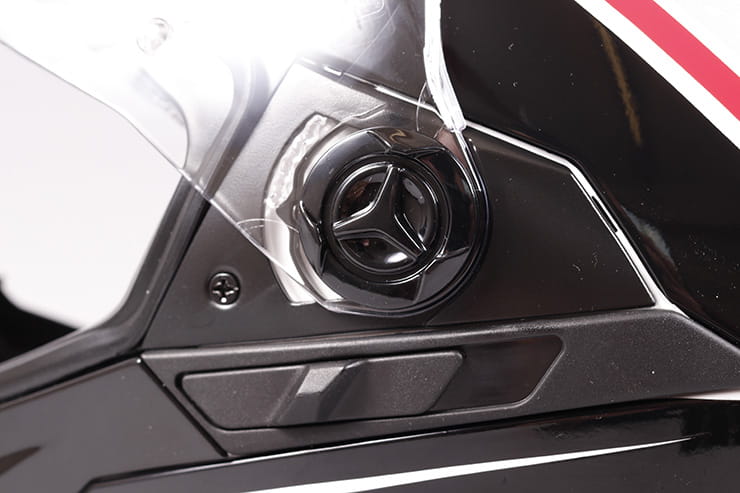 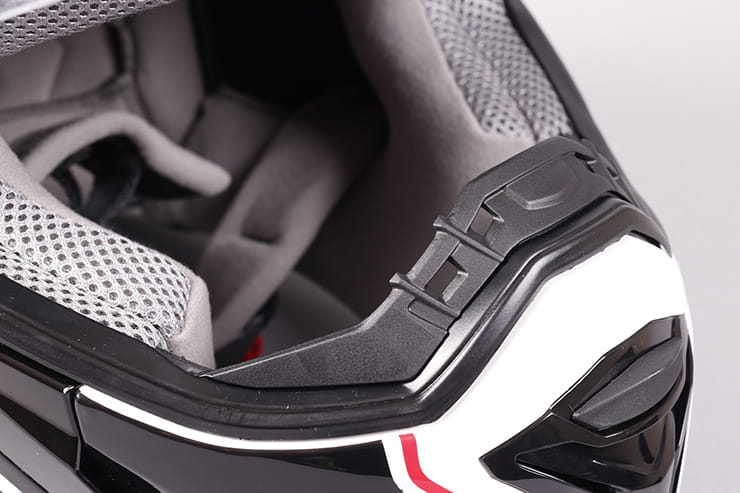 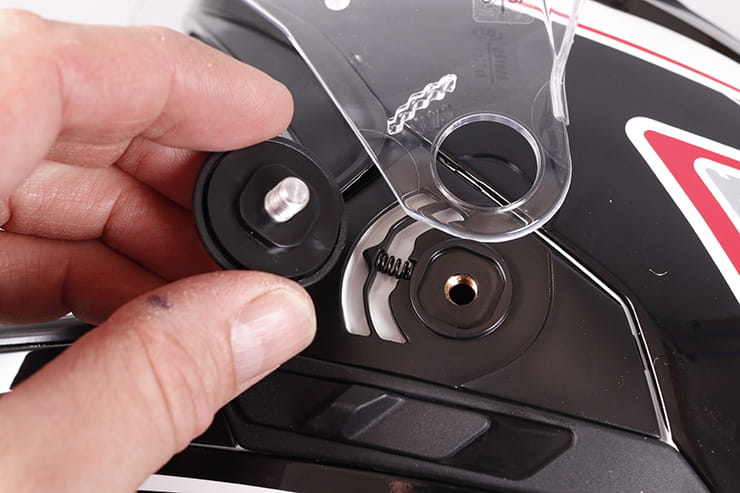 The visor is secured with thumb screws. Pleasingly, there’s a thumb tab on either side of the visor, which makes it easier to open when stopped at the light with the clutch held in.

The ratchet is five position, with no ‘just cracked open’ stage. But as this lid is quite airy, misting isn’t really a problem (the visor can take a Pinlock anti-fog insert, but one isn’t supplied).

The peripheral field of view is definitely adequate, but more limited than on my Nolan or MT for instance (though the Caberg has a better view when looking upwards).

The drop-down sun-shield is handy, but it does tend to suffer from fogging – on wet and cold days, it can get fogged while retracted, and takes a while to clear when you drop it down in front of your eyes. It fits neatly over the bridge of my nose, without touching it, and while the lever on the left is easy to operate, I sometimes struggle to find it. It has a somewhat brown tint to it – I prefer a more blue hue, but try one and you’ll be able to decide if it’s for you.

The visor seals well against the rain, but water can get in through the top vents (even when closed). 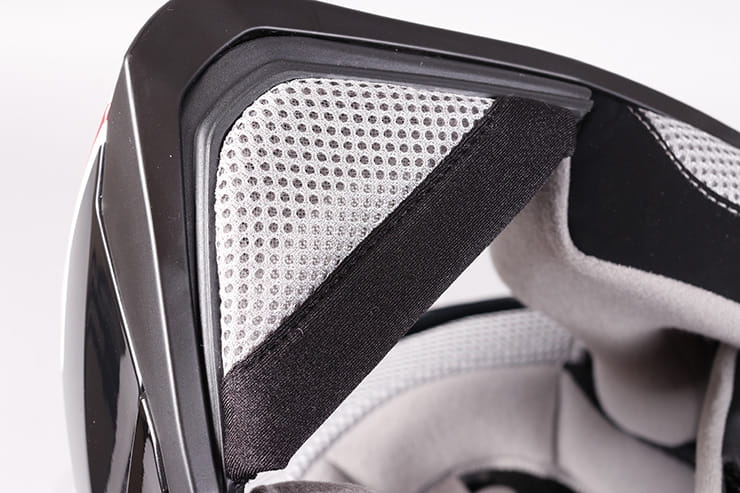 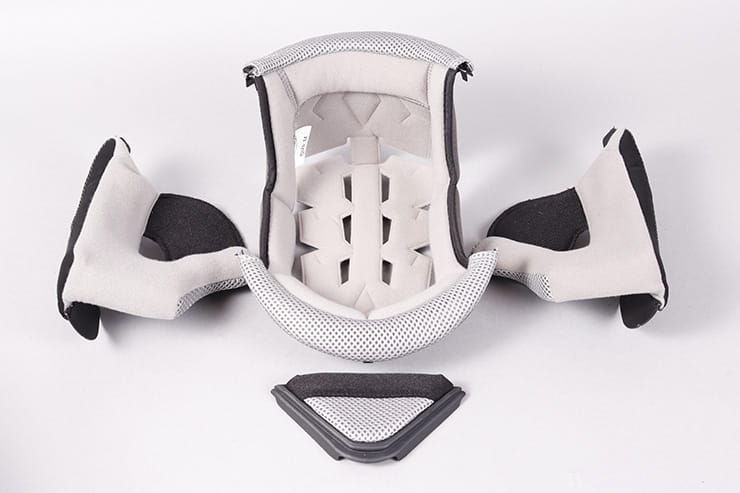 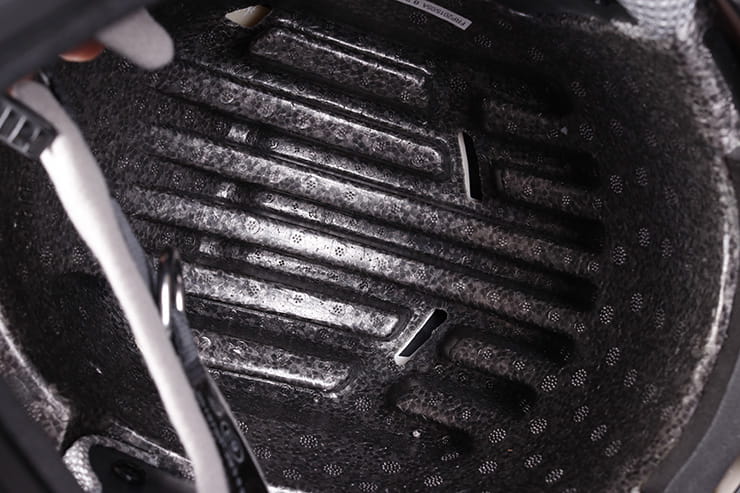 The fully-removable lining is easy to take out, except at the back lower edge of the skull cap, which also lifts off a piece of foam that’s glued onto the polystyrene. This goes back on okay, but keep an eye on it if you strip the lid a lot to clean it. This piece is only held on with double-sided tape, and isn’t a safety item. 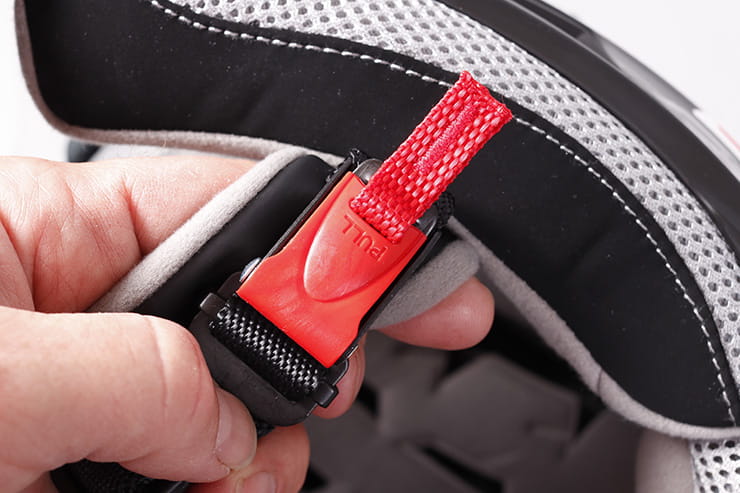 The Stunt uses a micrometric ratchet – these can be a little fiddly to first set up, but once done they give a secure fit every time, and can be used with gloves on.

The Caberg fits snugly and comfortably – the neck rolls around the base of the helmet are rather thinner than the other helmets I’ve been wearing (Nolan N87 and MT Targo), as is most of the padding on the inside covering the top of the head, but the cheek and forehead padding is thicker and holds my head in place quite firmly.

Of course, everybody’s head is different, so always try a helmet on before you buy.

I don’t wear glasses for riding, so I tested this with sunglasses, which had quite thick temple pieces. These slid into the helmet but with a bit of difficulty; spectacles with thicker arms might have some trouble – again, try before you buy.

While I wear moulded ear plugs, this helmet is definitely a bit more noisy than both the MT Targo and the Nolan N87 I’ve used, but the Caberg does filter out the annoying mid-range whirring, churning sound of my engine more effectively. In fact, I actually prefer the Caberg, even if the noise of the wind is more noticeable.

I like this helmet. The airy interior isn’t for everyone, so I wouldn’t recommend it as a touring lid, but for the price it’s good quality. It feels lightweight and gives your neck plenty of freedom of movement, and I like the shiny look with the red and white colour scheme.

I prefer my Nolan, but I’ve passed the Caberg on to my daughter; I treasure her safety and comfort as much as mine so I would think that counts as a recommendation.