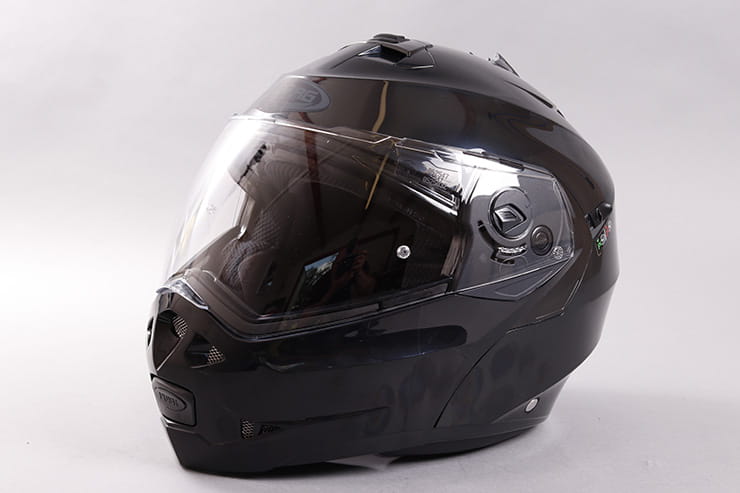 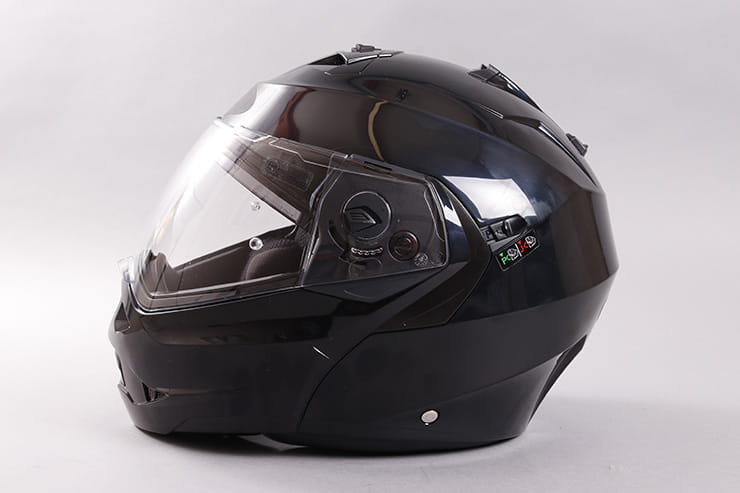 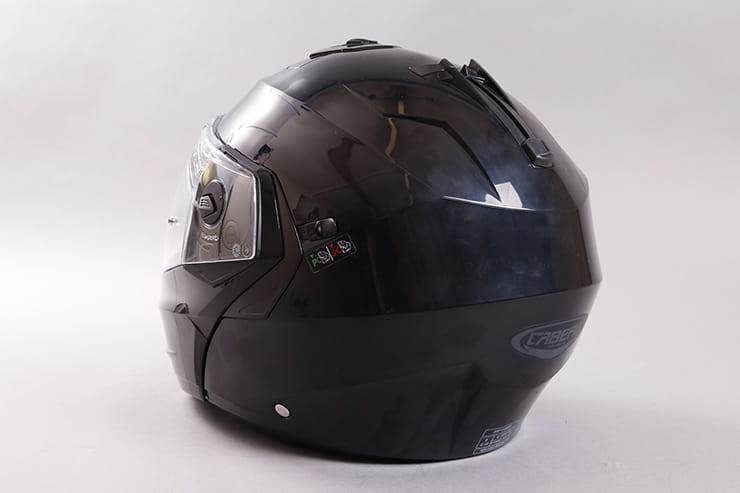 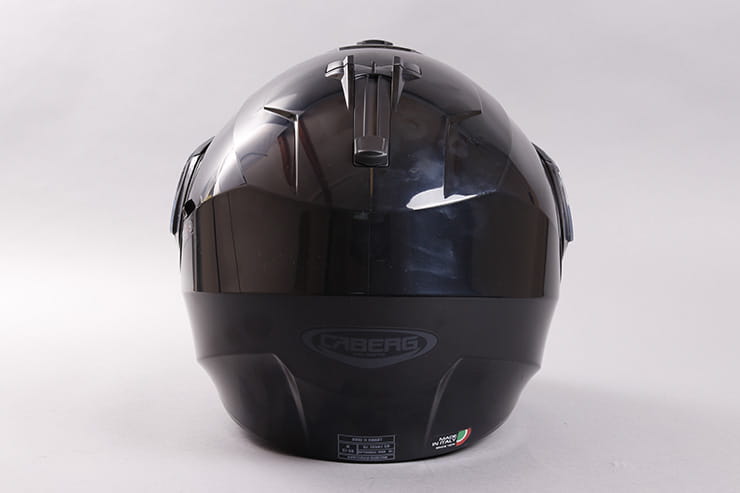 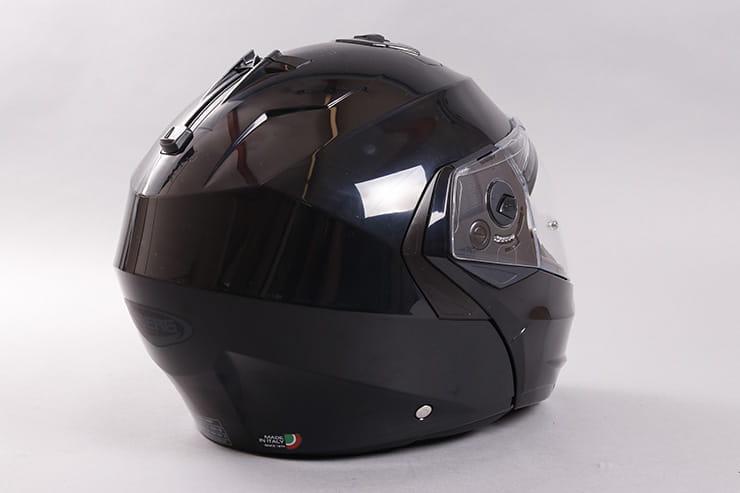 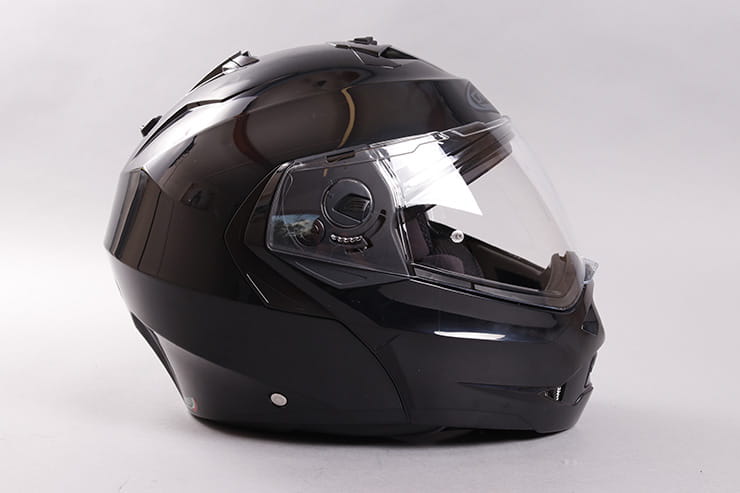 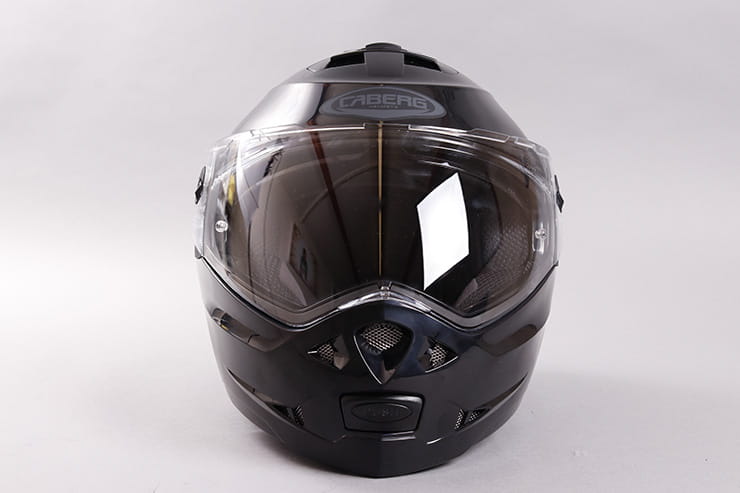 This low-priced model does look rather plasticky, but that’s to be expected at the cost; some visible moulding lines on the chin section make it look rather budget. It’s available in sizes XS, S, M, L and XL.

This is the first helmet I’ve used with a flip, but the benefit of being able to lift the front to talk at a petrol station for instance is great! A large push button at the front is pressed to flip it up… once opened, it stays in place well, but there’s also a latch on the left to lock it open. I really appreciate how much easier a flip-front helmet is to put on.

Tipping the scales at 1547g for this medium-sized lid, the Duke II is one of the lightest budget flip-fronts tested by BikeSocial. 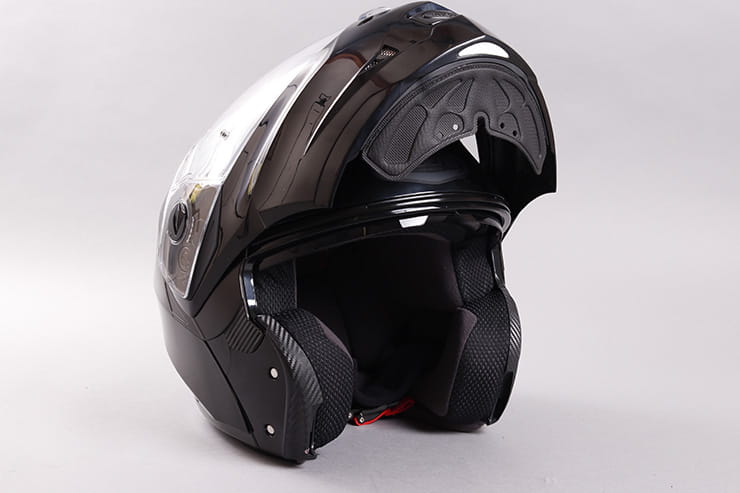 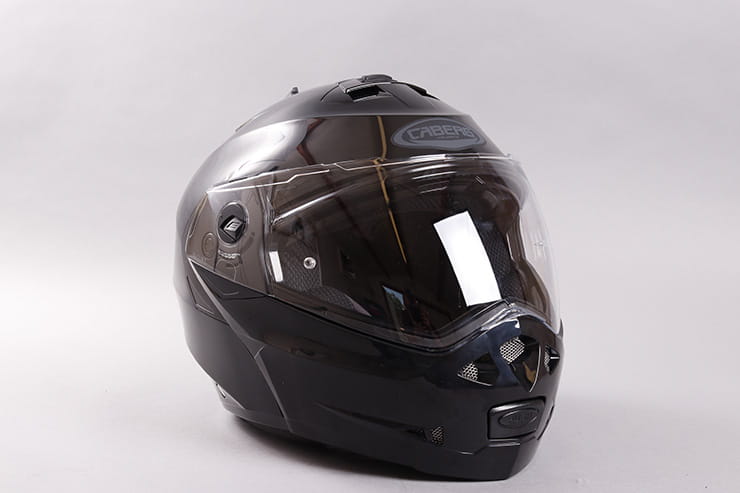 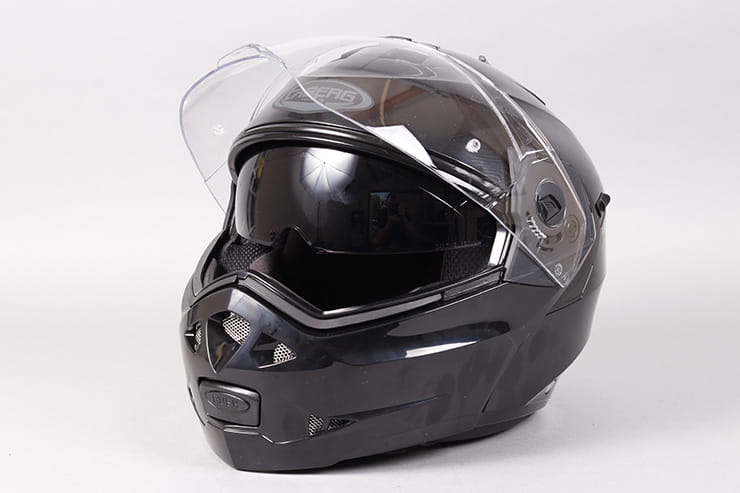 There’s a pair of vents on the top of the Caberg, operated by a single lever, which can be opened and closed easily with both summer and winter gloves, though I didn’t notice a lot of difference with it open. The vent below the visor is always open, with a good dispersed effect that helps prevent misting. 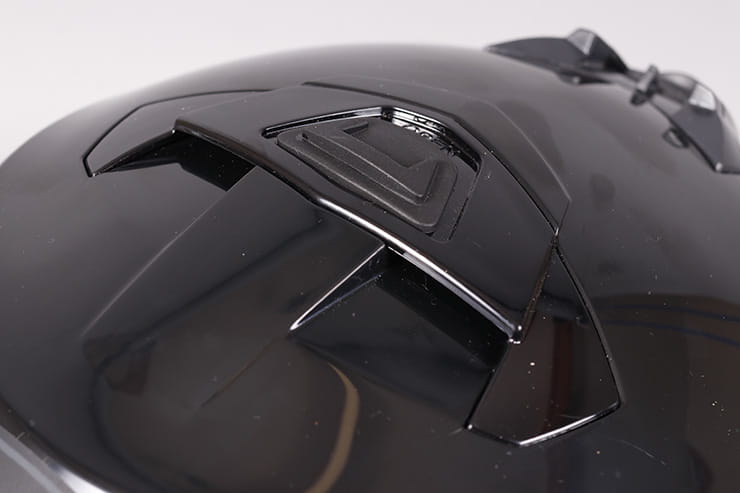 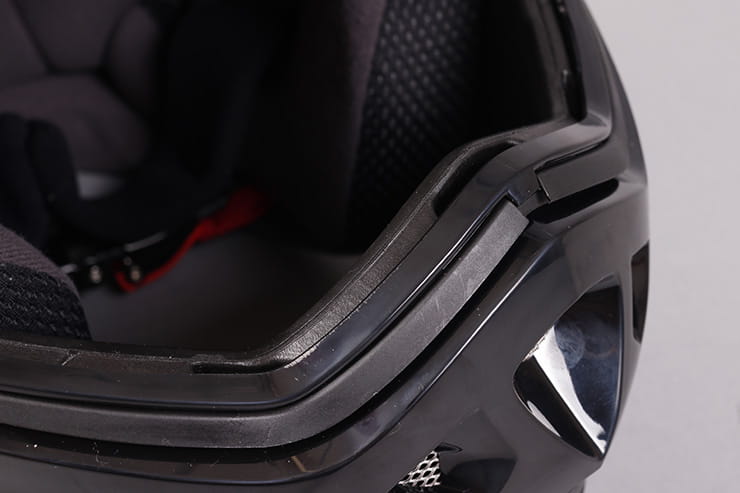 Two small thumb levers retain small lips on the visor – it’s easy to remove and replace, but if you’re fiddling with it, it is possible to release the visor without realising.

There’s one large thumb tab across the centre of the visor, which makes it easy to open when stopped at the lights with the clutch in, and the six-position ratchet is smooth, with the ability to open it just slightly for demisting.

In very heavy rain, it’s possible for a small amount of water to creep into the top of the visor.

Misting isn’t really an issue, despite there being no Pinlock anti-fog insert supplied (the visor can take one), and overall vision is very good. I also really appreciate the drop-down sun visor, which works well and is operated by a slider on the top of the lid. 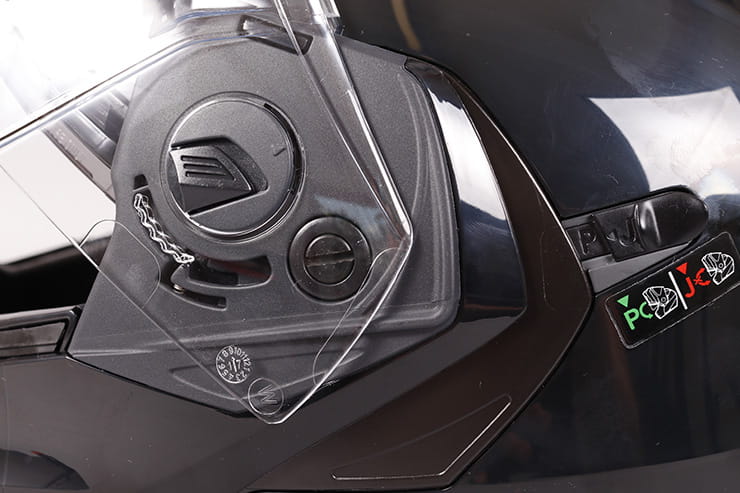 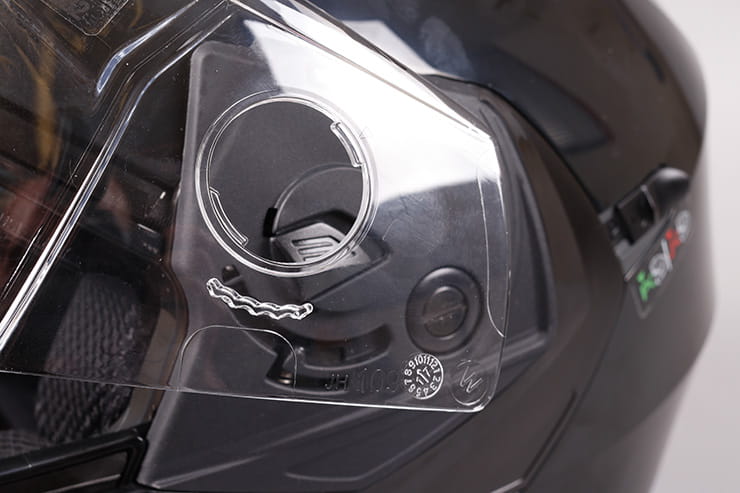 The lining is fairly easy to remove, and appears to give a decent amount of space to install an intercom system. The chin skirt – which helps seal the bottom – is also removable. 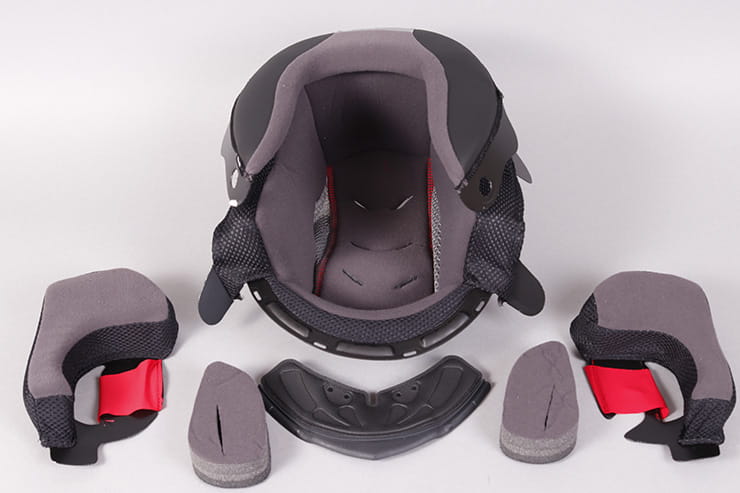 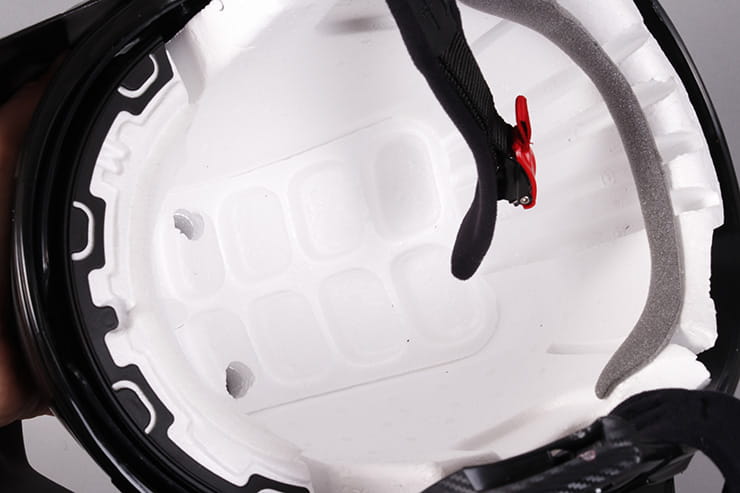 The Duke II uses a micrometric ratchet fastener – setting it up initially is a little fiddly, but once done it’s easy to use day-to-day, even with gloves on.

Fit is very subjective, so always try before you buy, but I found the Caberg to be nice and snug.

I don’t wear glasses, but the flip-front here is really useful – it’s really easy to slip sunglasses in, though because the cushioning is quite tight, it pushes the  spec’s arms against my head… again, always try for yourself to be sure. 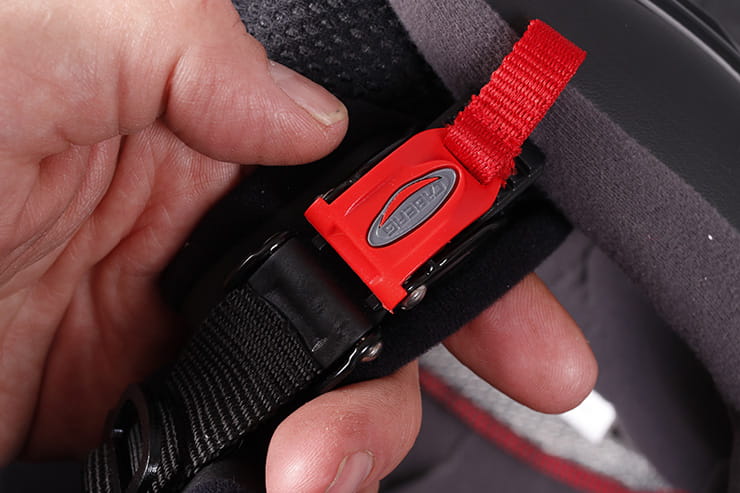 I find this helmet really quiet; I’ve recently had a bit of a baffle issue on my bike’s exhaust, but with this helmet on I hardly hear it!

With all its features, this seems a great value helmet. It fits me well, it isn’t noisy, and a flip-front is incredibly practical. Slight water leak aside, I’d definitely recommend it.