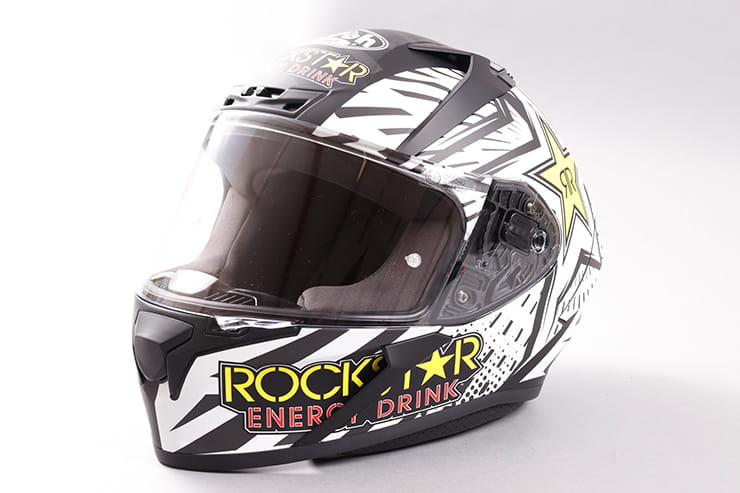 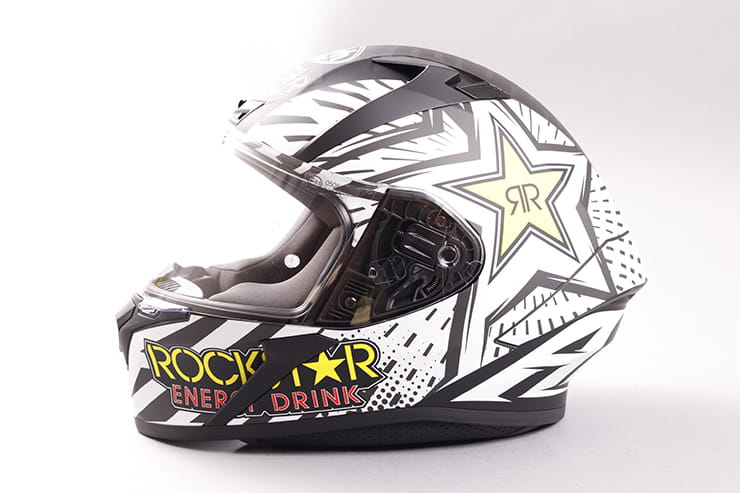 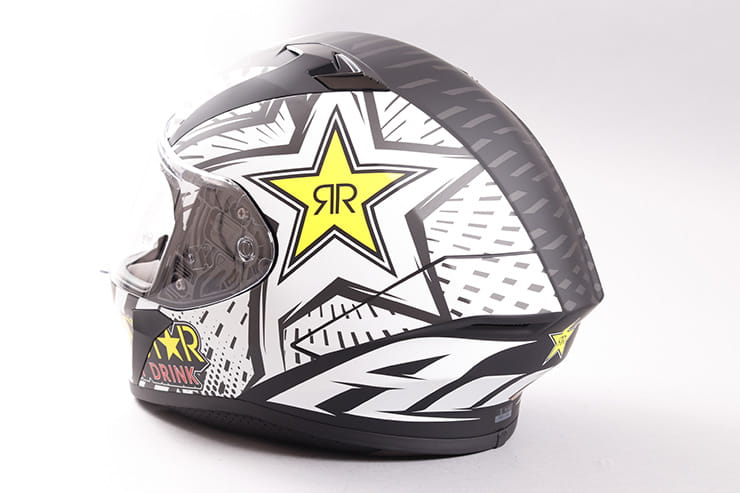 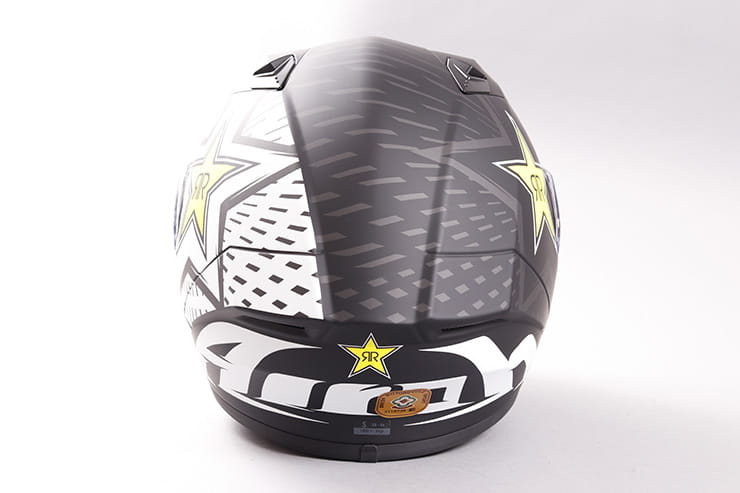 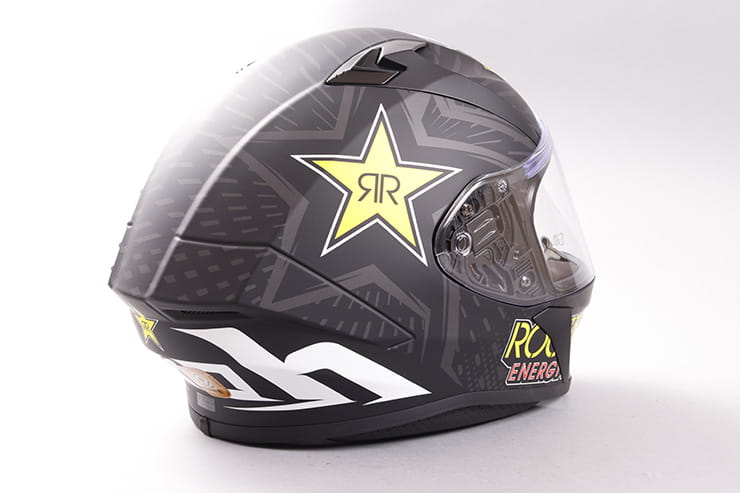 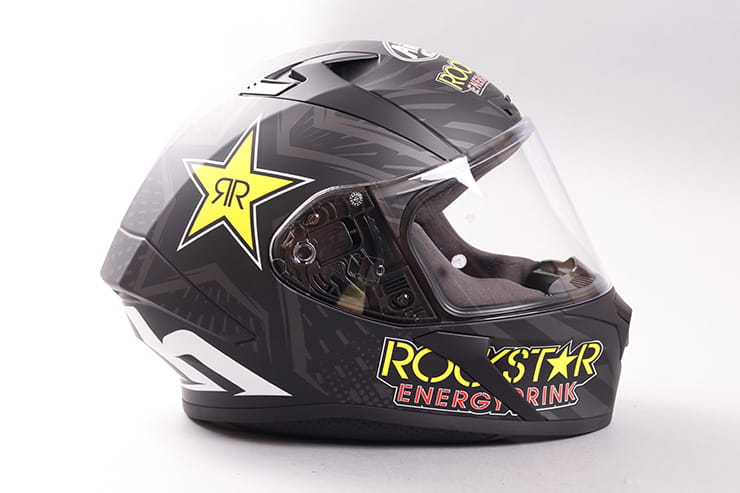 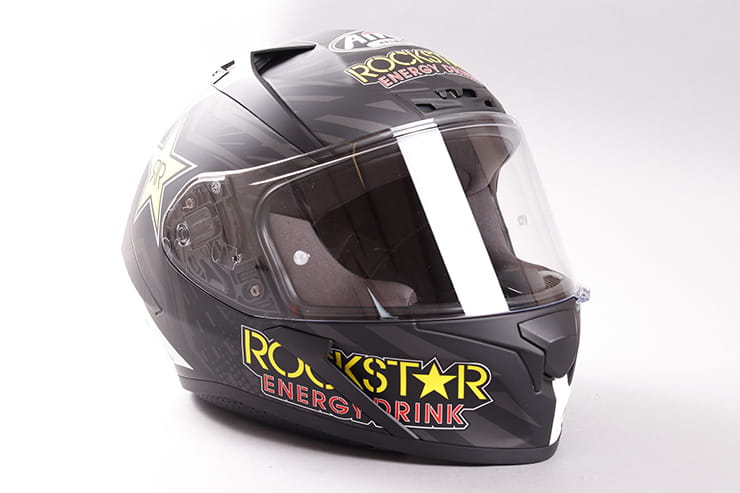 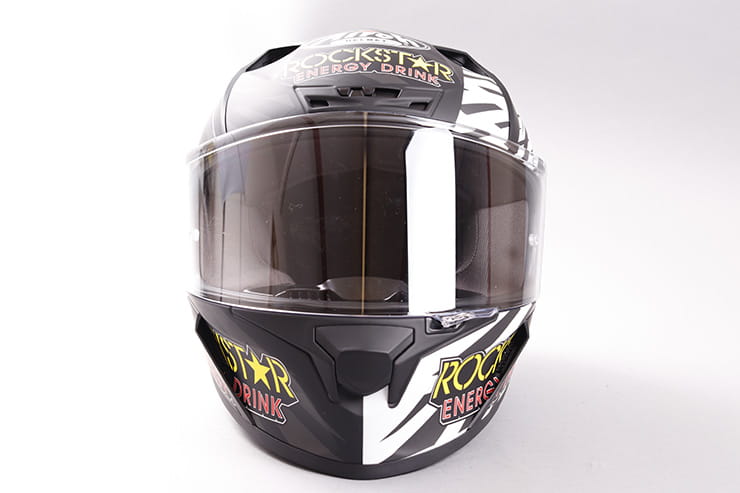 The Airoh Valor is a budget ACU-gold-approved full-face helmet designed for sports bike riders. This ‘Rockstar’ model has been tested for two months by motorcycle instructor and BikeSocial Test Team member Jenny Kirkwood…

The thermoplastic shell comes in two sizes, one covering XS, S and M, the other L, XL and XXL. It has a matt finish that feels good to the touch, and aggressive styling with non-functioning side air scoops, as well as a stepped spoiler on the rear.

This small-sized helmet weighs 1463g, which puts it among the lighter helmets in the sub-£150 category. It certainly feels very easy on the neck, even over long rides. 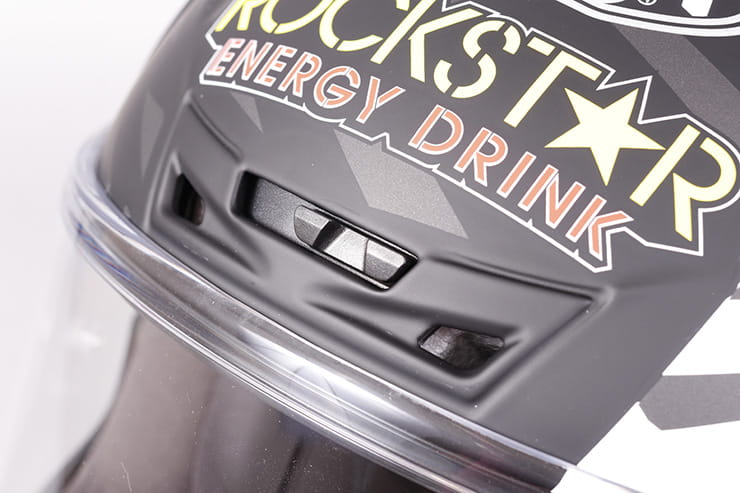 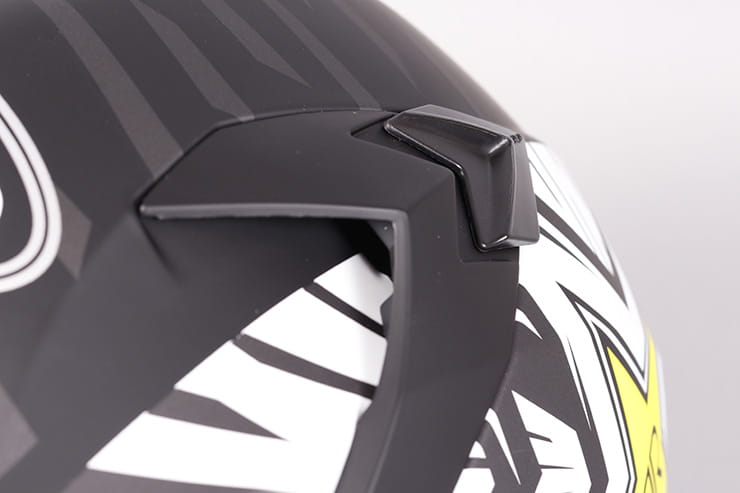 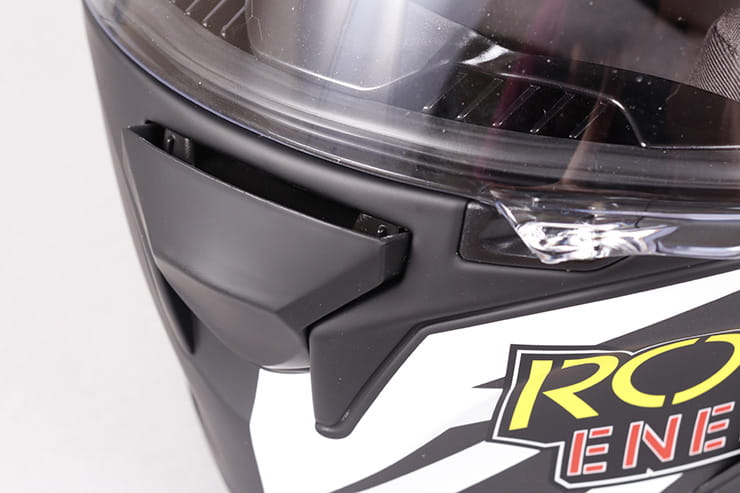 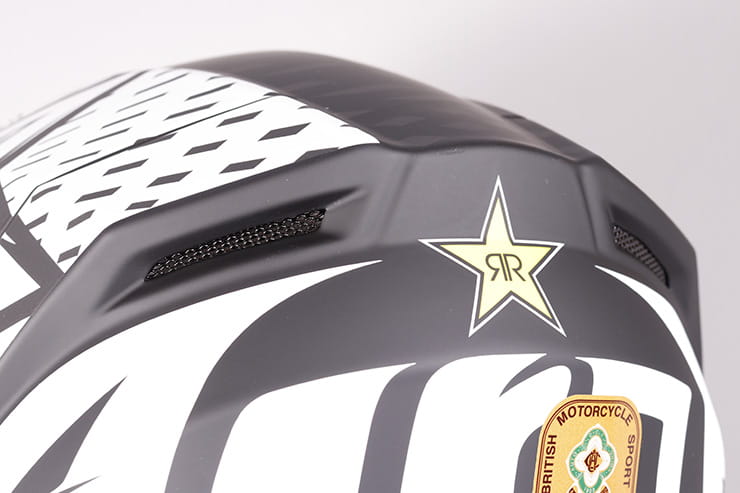 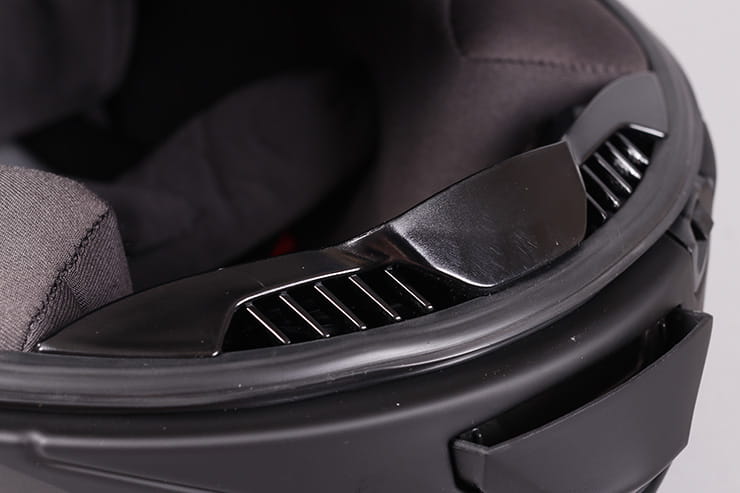 The Airoh Valor has two independently closing vents on the top, a pair of brow vents with a single operating lever, and a chin vent. The nose deflector isn’t removable.

I found the vents to work well, keeping cool air circulating and helping to prevent fogging. With the vents closed, the helmet is quite still inside, and they’re all easy to operate with summer and winter gloves on. 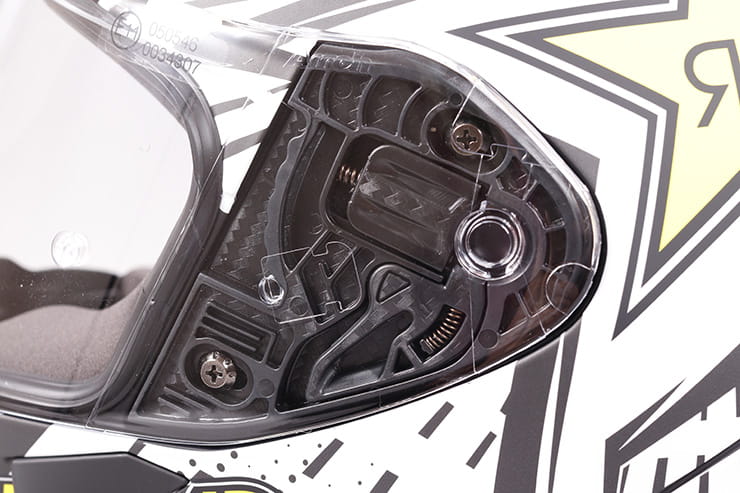 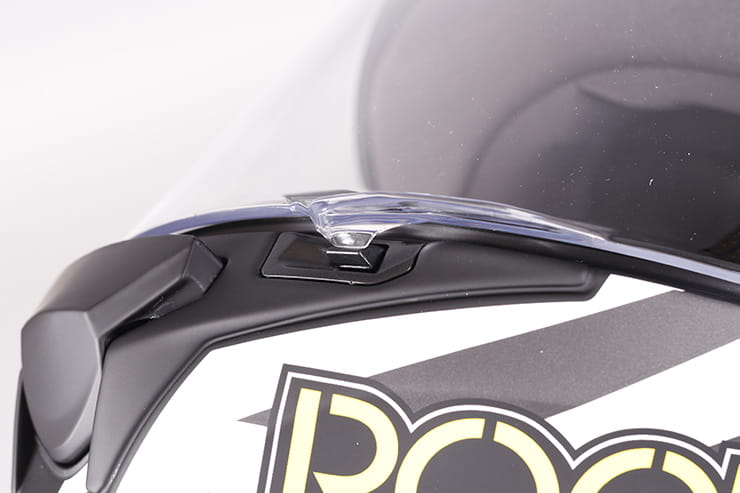 With a lever on either side, no tools are required to remove the visor; getting it off is pretty easy, but putting it back on is a little more fiddly. You do get the hang of it though.

The visor locks down under a catch, and has six stages on the ratchet, which is rather notchy feeling, but can be lifted just over the catch to crack open.

A single large tab on the left is used to open it – I prefer to have one in the middle or one on either side for ease of use when stopped at lights with the clutch pulled in.

In heavy rain, the visor can leak a little at the top edge – trying to adjust the visor plates didn’t help as I couldn’t slide them rearwards.

While one isn’t supplied, a Pinlock can be fitted for improved anti-mist in colder weather – I found it fogged on chilly mornings. There isn’t a drop-down sun-visor fitted. 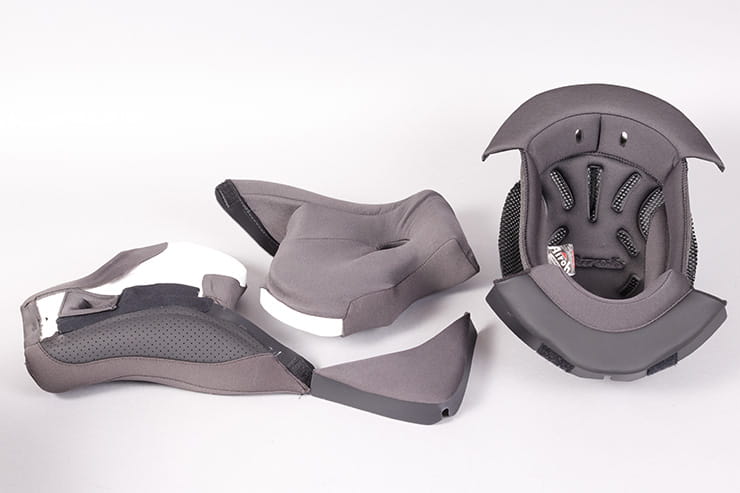 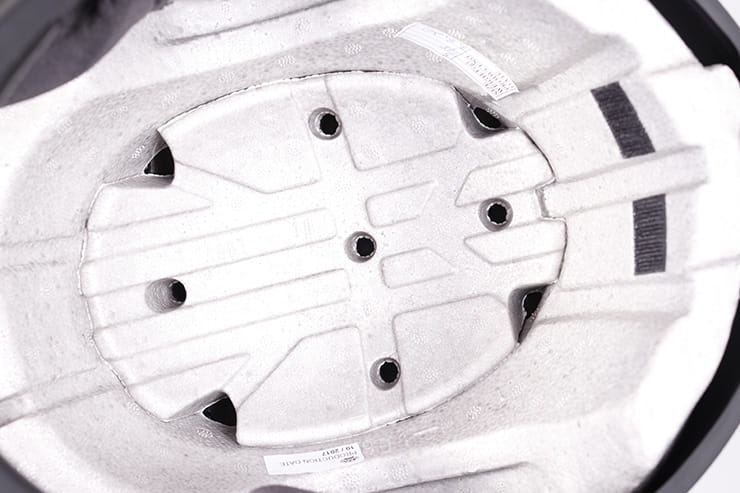 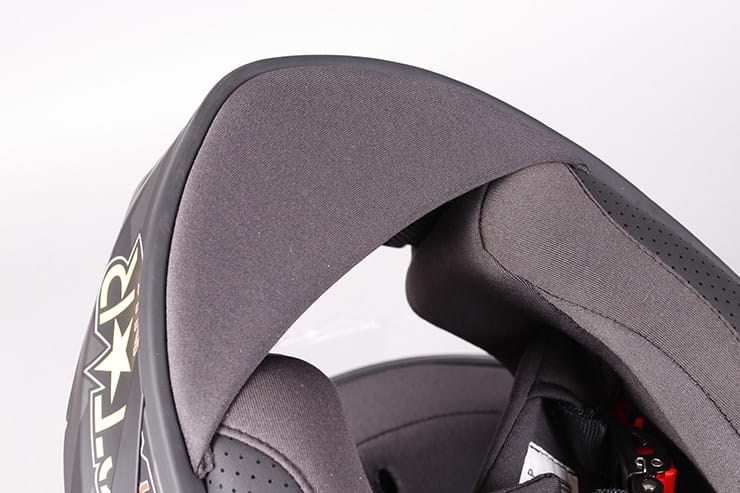 The lining is removable, with a pair of cheek pads, skull cap and chin skirt. It’s fairly easy to take out and put back in, though the cheeks are a friction fit, so have to be pulled quite hard.

The cheek pads are bonded to the polystyrene, which makes washing them a little trickier, but it’s better than them not being removable at all. 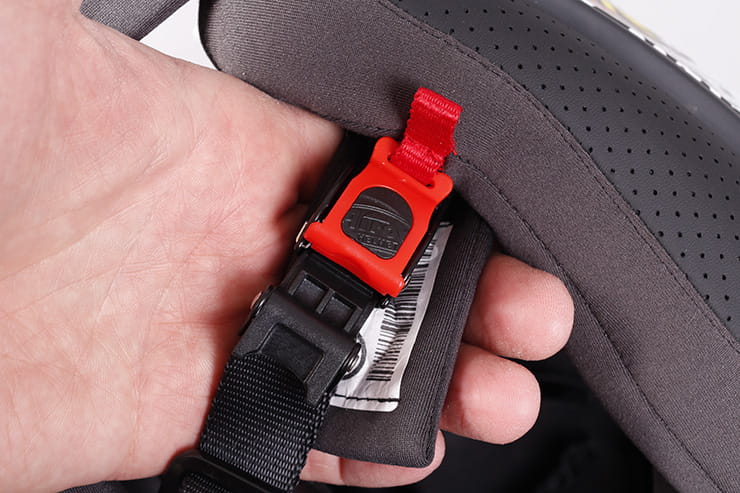 The Valor uses a micrometric ratchet, which is easy to operate even with gloves on. Some people prefer a double-D ring, but I do like the convenience of this, and after the strap is adjusted for length once, you can always get a good fit (unlike the seat-belt-style buckles of old).

Fit is of course very subjective, but I found the Valor to be extremely comfortable. I got on okay with it while wearing spectacles (I don’t usually wear them), but I’d always suggest trying one before you decide. There were no pressure points or uncomfortable areas.

I don’t wear earplugs as I’m allergic to them, but the Airoh wasn’t noticeably noisy – if anything, it’s quieter than my G-Mac and my HJC.

For the price, this Airoh has some great features. It’s a shame the visor can let water in, but I still would recommend it to a friend. It’s light compared to others I’ve worn, and is a good entry-level product.