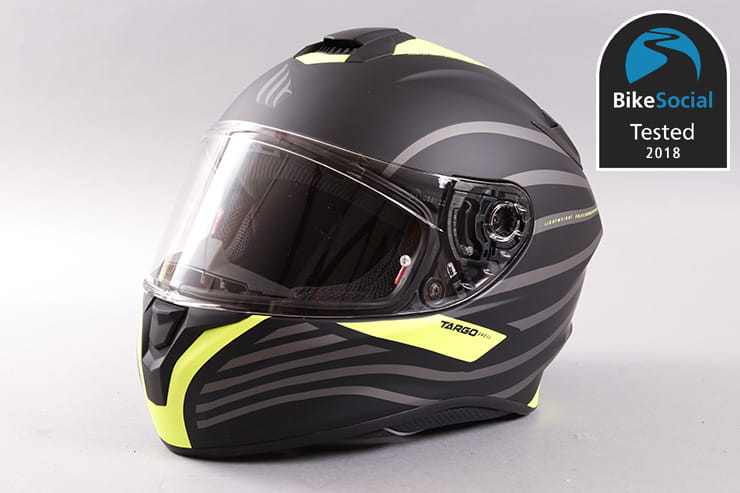 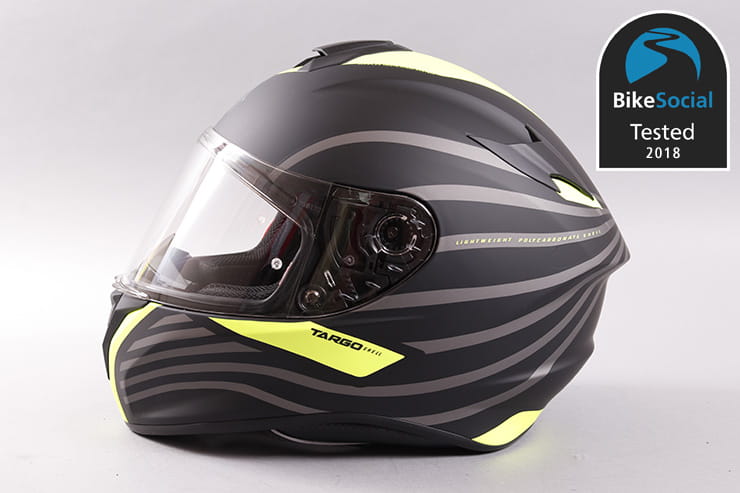 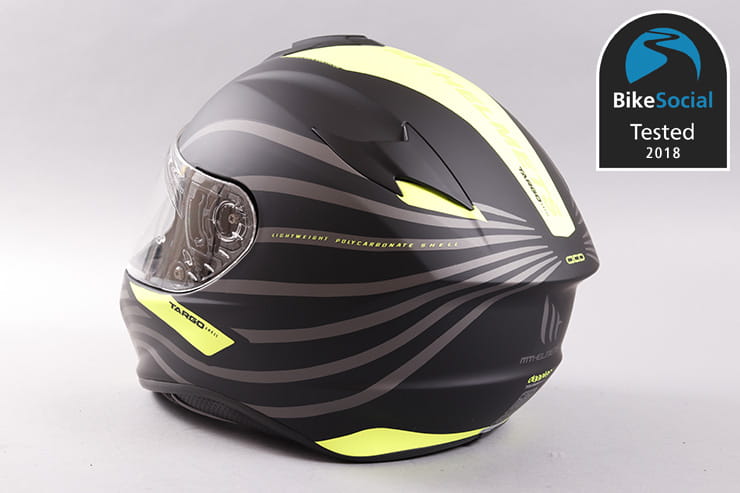 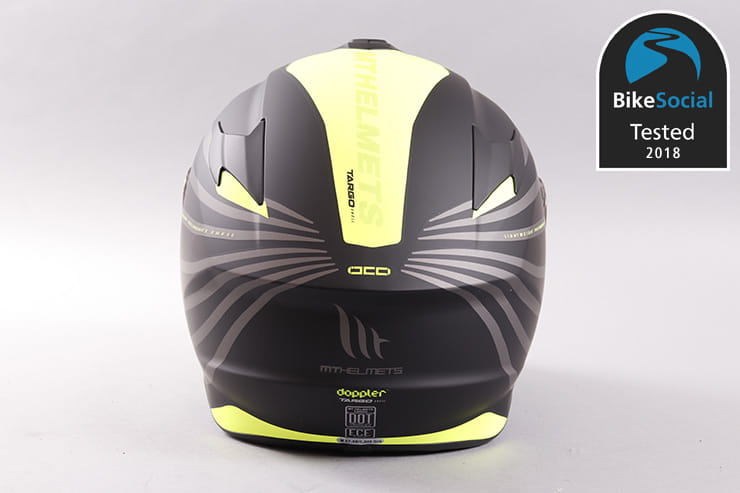 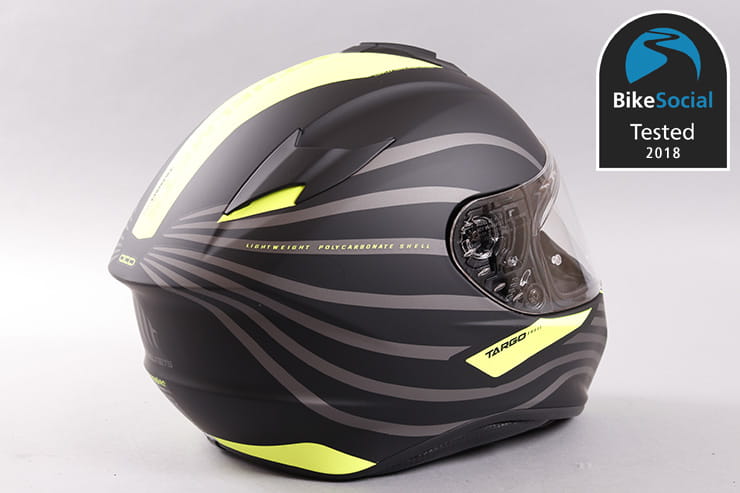 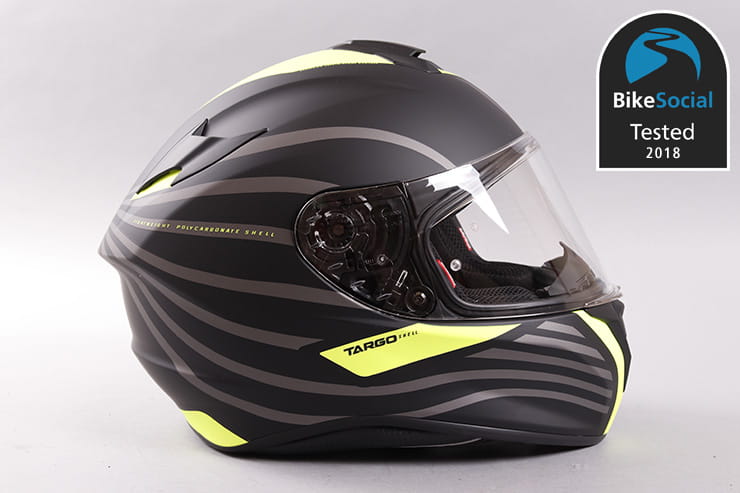 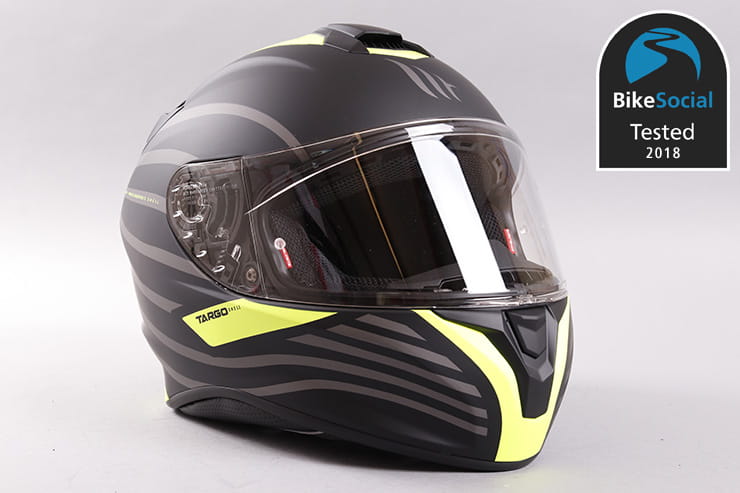 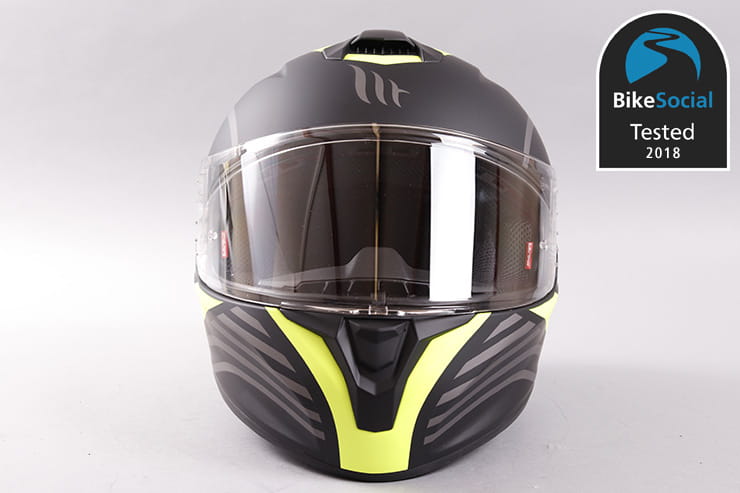 Costing just £59.99 for plain colours, and £69.99 for graphics, the MT Targo is a very affordable full-face helmet. Patricia Stiemke, BikeSocial Test Team member, has been using one for two months of daily commuting on her Honda Deauville…

The ‘Doppler A1’ matt black and fluoro yellow finish of this polycarbonate shell looks and feels like it’s worth more than £70. Overall it’s got a quality build that belies its budget price.

This medium version weighs 1517g, which is fairly typical of a full-face lid, and certainly doesn’t feel heavy or unwieldy in use. 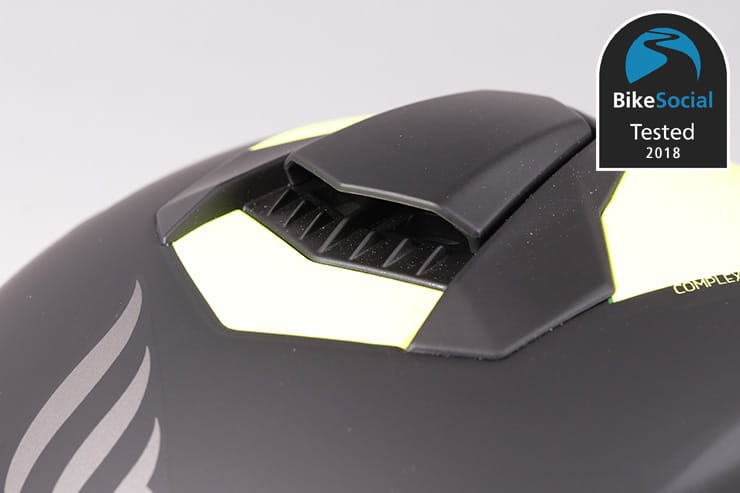 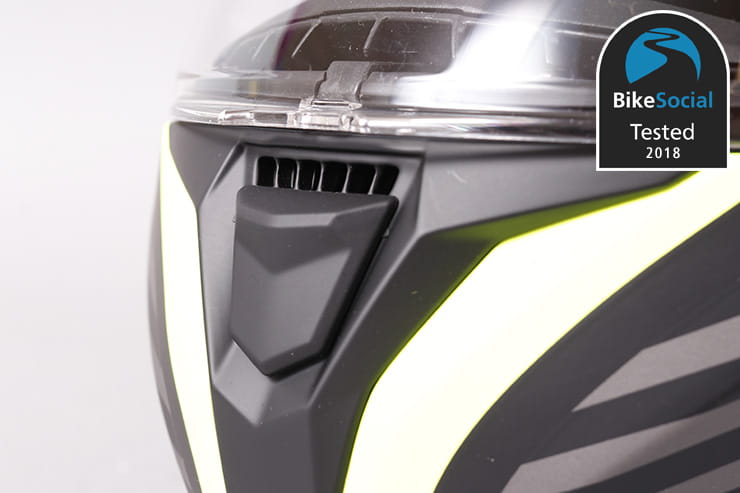 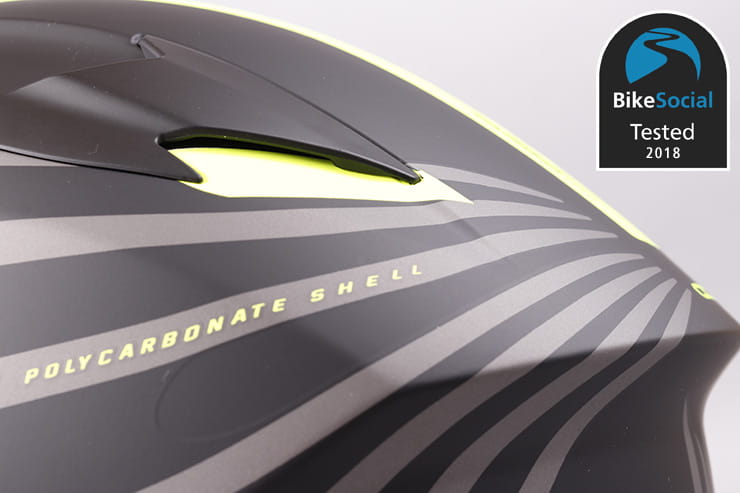 There are single closeable top and chin vets, and an always-open exhaust; when open, there’s no dramatic ‘whoosh’ effect, rather a subtle cooling flow of air. If you’re really cooking, you’ll need to open the visor, but I didn’t get any problems with dust entering the vents and the helmet’s reasonably still inside, so shouldn’t be too cold in the winter.

The top vents have two stages of open, but it’s hard to find the positions with gloves on. Most of the time you’ll have them full open anyway, though with wet gloves they can be a little tricky to close thanks to the small ridges. 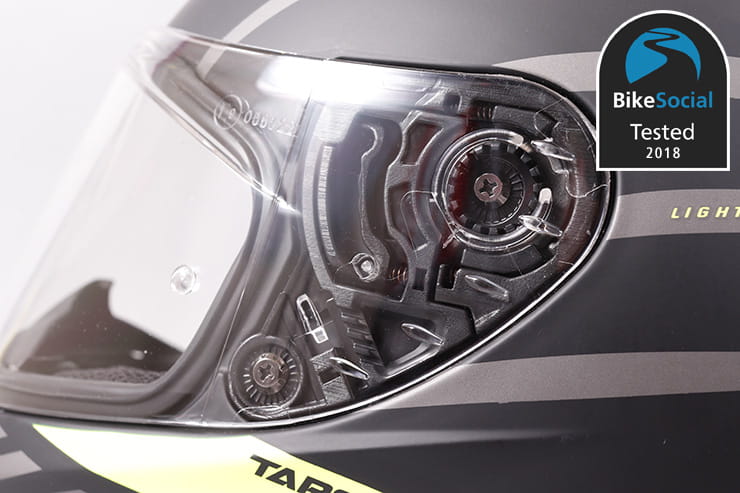 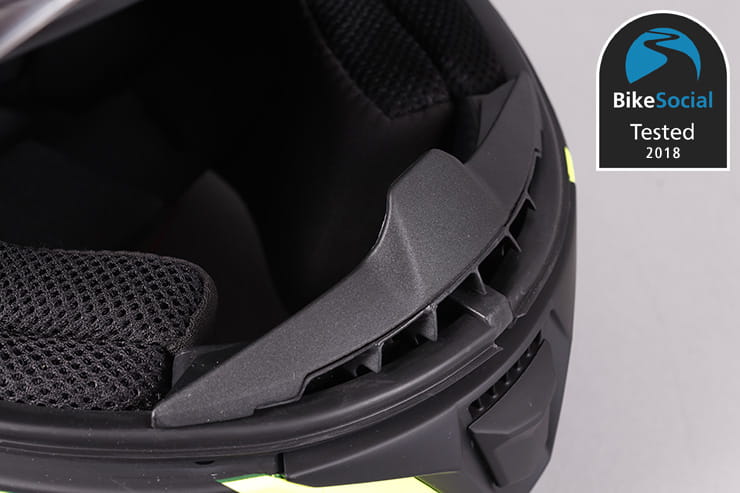 The visor’s released for cleaning with a single lever on either side – it’s easy to refit too, though I did notice a little bit of wobble in the mechanism.

There are two thumb tabs for opening – one on either side of centre, which I prefer as it makes it easier to operate with your right hand while holding the clutch in.

The opening mechanism uses a smooth five-position ratchet that doesn’t feel cheap. The ‘just open’ setting stays in place at most speeds, and does a pretty good job of preventing misting, though on a really wet day it will cloud up. I use an anti-fog spray, but the visor will take a Pinlock MaxVision anti-fog insert if you want to invest in one for around £22.

In heavy rain, the visor seals well, though I did get the odd drop of rain coming down, likely through the vents.

There’s no drop-down sunshield built into the Targo, which I really missed, though this is a budget helmet so it’s perhaps not too surprising. 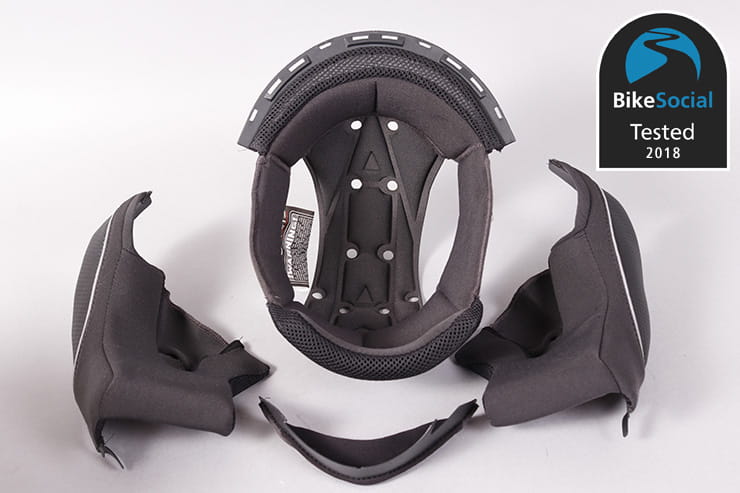 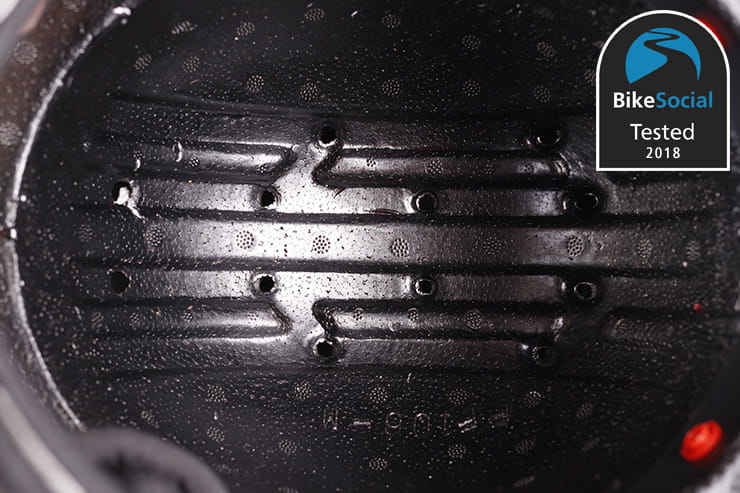 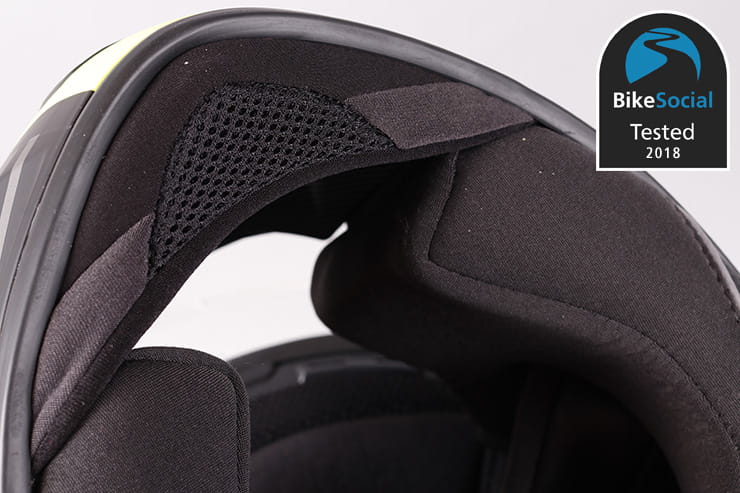 The lining is easily removed, and almost as simple to refit, so cleaning shouldn’t be an issue – a great feature to see in a budget lid. 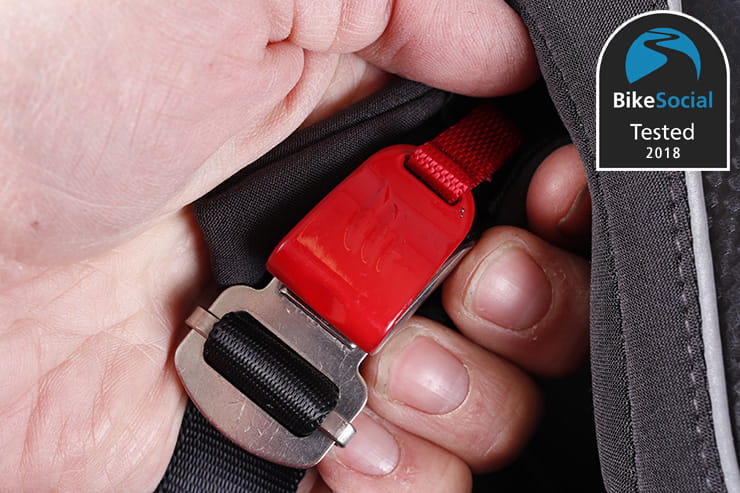 The Targo uses a micrometric ratchet fastener, which takes a few minutes to set, but then is quick and easy to use, even with gloves on. I found it didn’t have the strong bite of others I’ve had, so wasn’t quite as reassuringly secure. Having said that, I didn’t have any problems with it.

Fit is of course very subjective, but the Targo fits me snugly and comfortably, the thick neck rolls at the base keeping my head feeling nicely enclosed. It’s not as roomy as some others at the front, so I had to move it around a little to avoid my nose touching the guard. To be fair, having dreadlocks doesn’t help, so do try it on as you might find it no problem at all.

Spectacles fit easily into the lid and sit properly on my face, so it’s good to find a budget lid that works so well for those who wear glasses.

I’d say the noise level of this helmet is on a par with others I’ve used, though I do notice the mid-range whirring on my bike’s engine a little more in it. Overall though, I can’t fault it – just make sure that, like any other helmet, you do wear earplugs.

I found the MT Targo to be functional and comfortable; for the price I would certainly give it a thumbs up, I just miss having a drop-down sunvisor.