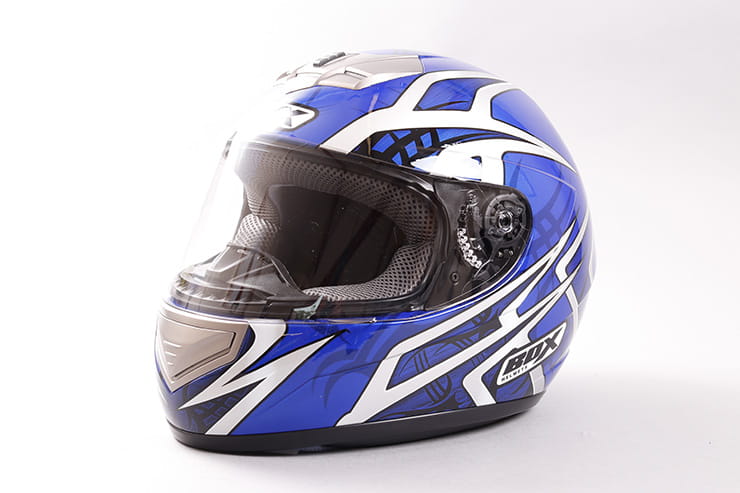 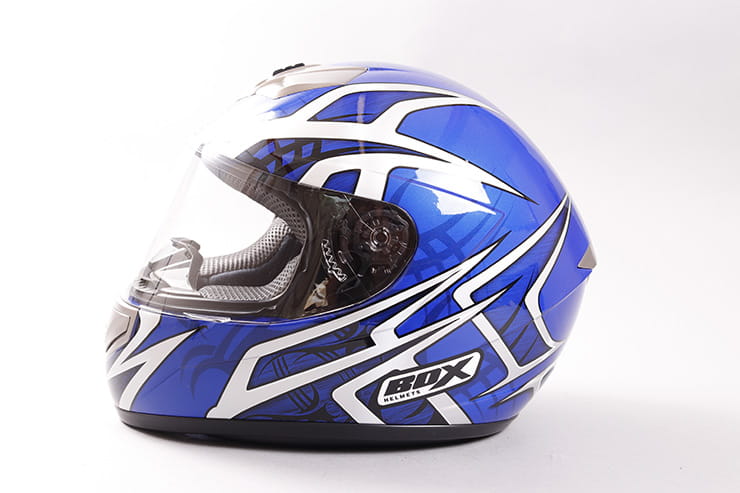 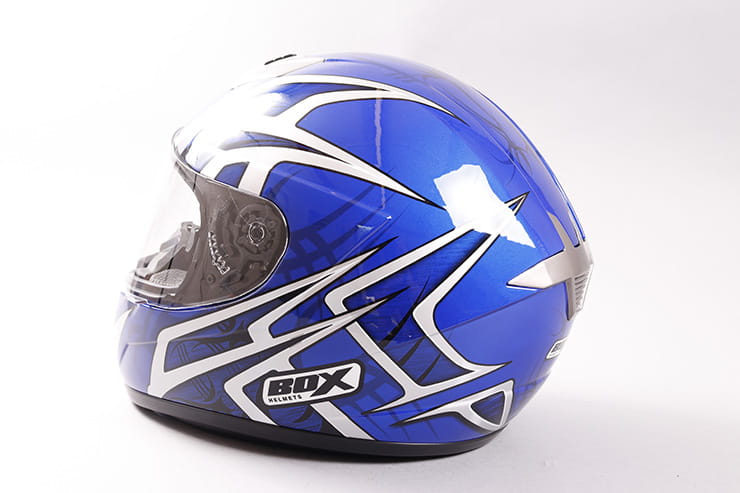 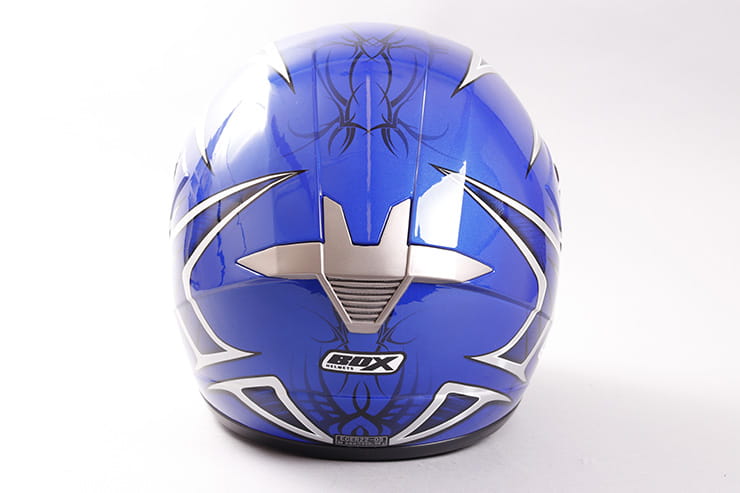 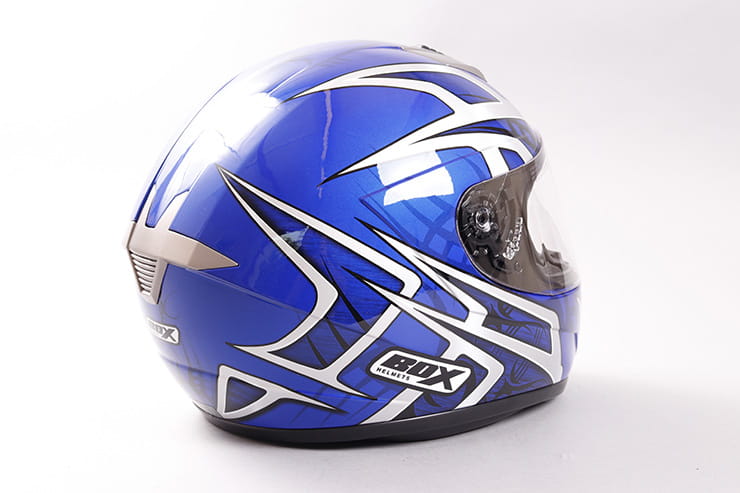 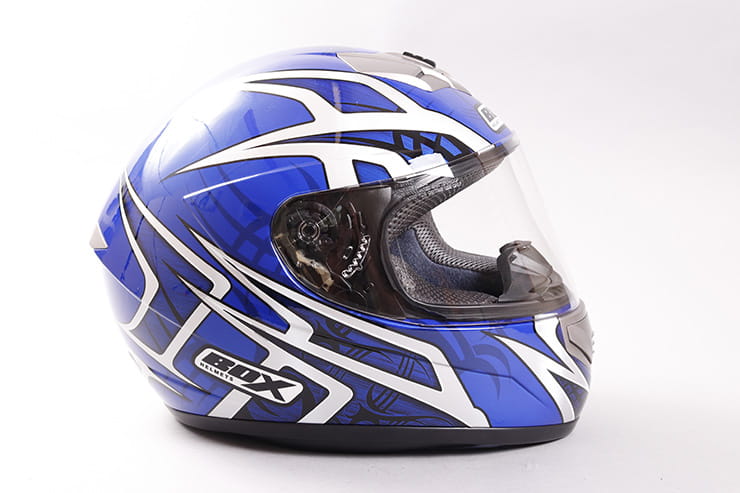 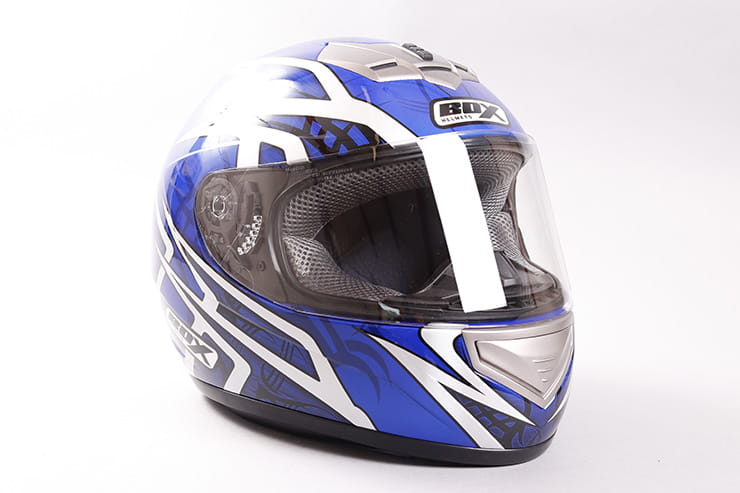 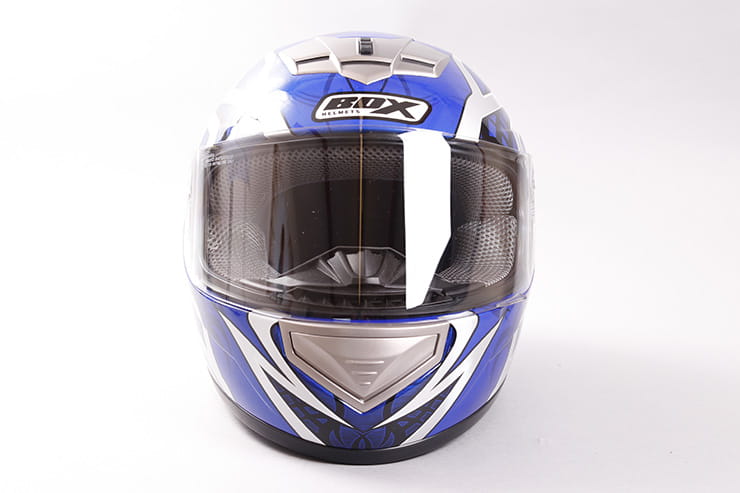 The Box is a budget full-face helmet costing just £54.99 in plain colours, and £59.99 with graphics. I’ve been using it for the past two months on a KTM 1290 Super Adventure S and Harley-Davidson Fat Bob 114…

The thermoplastic shell of this model has a deep gloss and appealing metallic blue finish. The vents look cheap, but then it is a very low-priced helmet.

The BX-1 weighs 1506g, which isn’t bad for a budget lid – it’s not that much more than the lightest we’ve tried, and certainly well away from the heaviest. 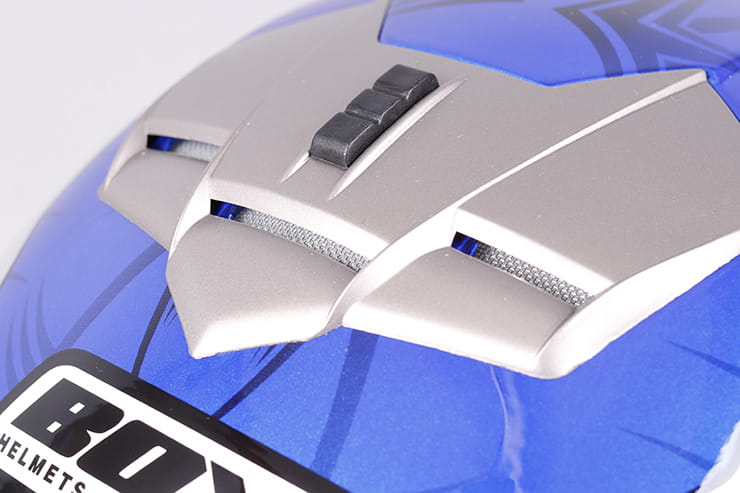 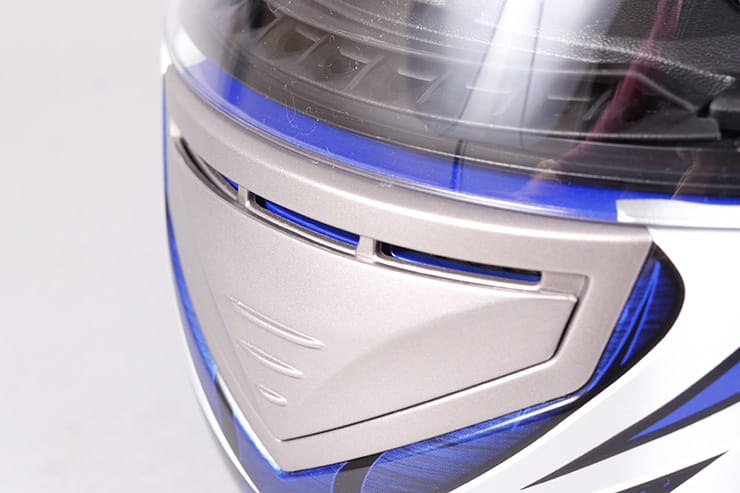 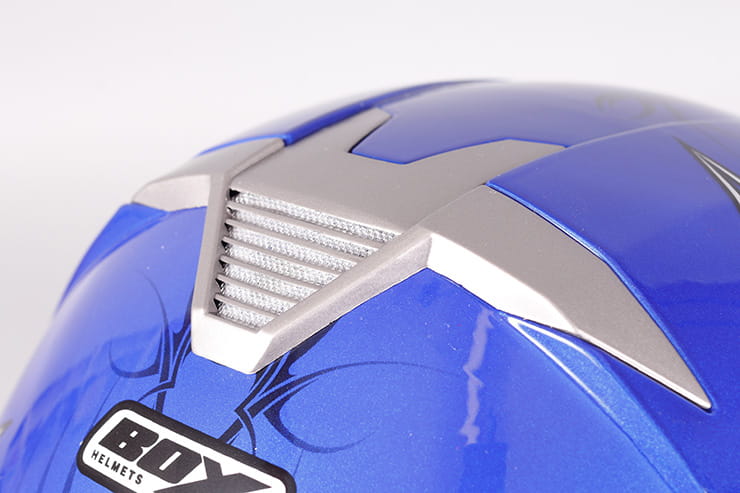 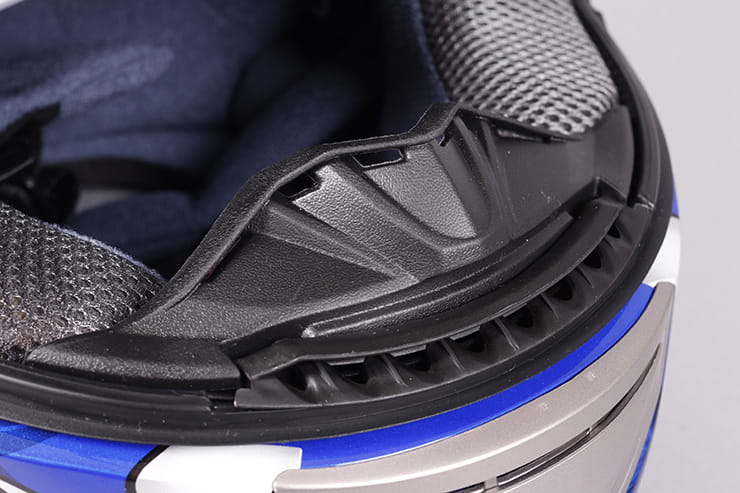 The vent above the visor is a simple slide action to close and open three horizontal slits, but they’re narrow and have no real effect.

The vent underneath the visor slides up and down to cover three further horizontal slits and is a little more effective, but considering the amount of space it takes up, it doesn’t do a good enough job on a hot day. At least not many flies will make it inside though!

There’s an exhaust vent on the rear, but it’s fed by a very small hole in the inner shell, which has no channels cut into it to move air around.

The vents are easily found and operated, thanks to ridges moulded into them.

With no chin curtain fitted, the wind does tend to lift the helmet from underneath at speeds over 50mph; this is a real negative for me. Below those speeds, the BOX is a good lid and I’d still recommend it to those on a 125cc machine or below. 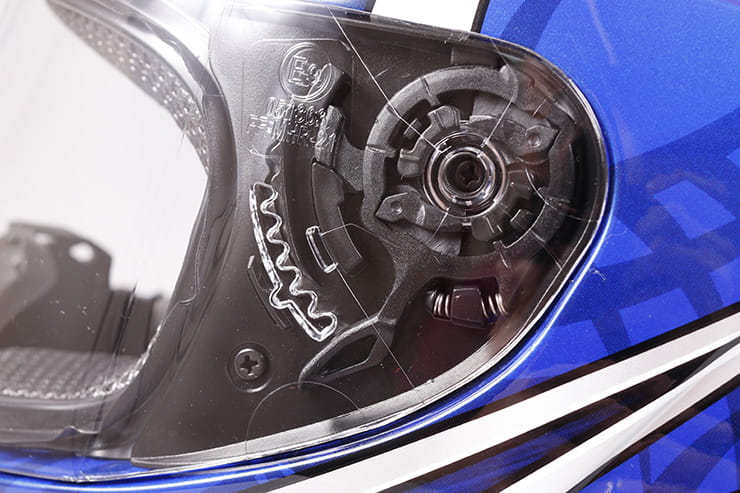 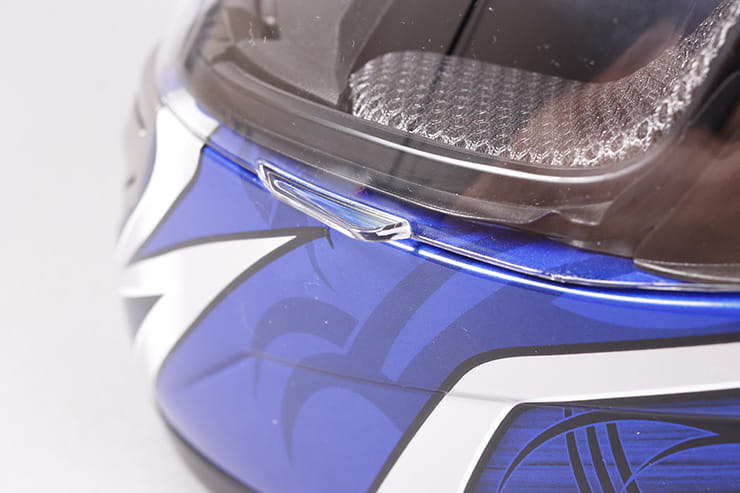 The first time I rode in the Box BX-1, I was annoyed by the rubbery nose guard – it’s too large, but thankfully it’s easy to remove. This also increases the peripheral vision.

The material used for the visor isn’t the most premium compared to my AGV for example, and while the clarity of the view is mildly hindered by comparison, it doesn’t create any issues.

The first stage of opening on the smooth six-position ratchet is wide enough to fit an ungloved finger into – I would prefer the option of having a smaller gap for a minimal amount of air flow, but it does stop fogging. Sadly you can’t crack the visor just open, and it isn’t designed to accept a Pinlock anti-fog insert,

There’s a single good-sized lever on the left of the visor to operate it (a little trickier to use if stopped at lights with the clutch pulled in), and when closed it seals well, preventing water coming into the top in heavy downpours. 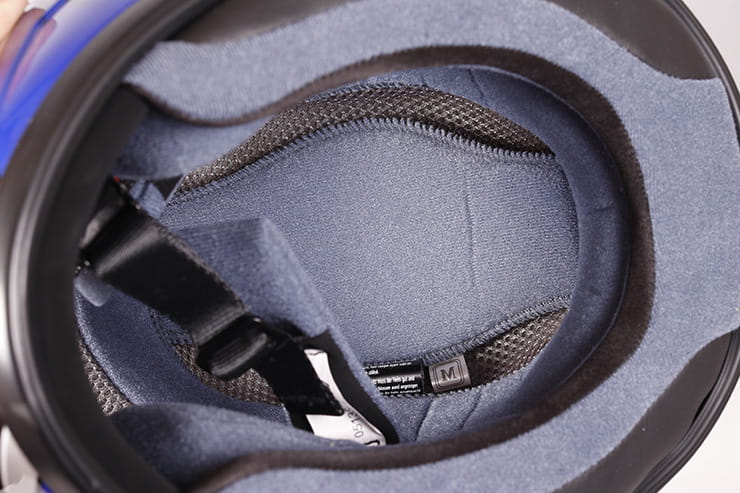 The lining isn’t removable, so cleaning will require careful rinsing in the bath. It’s not that surprising on a helmet of this price, but there are others around the same cost that do have this useful feature. 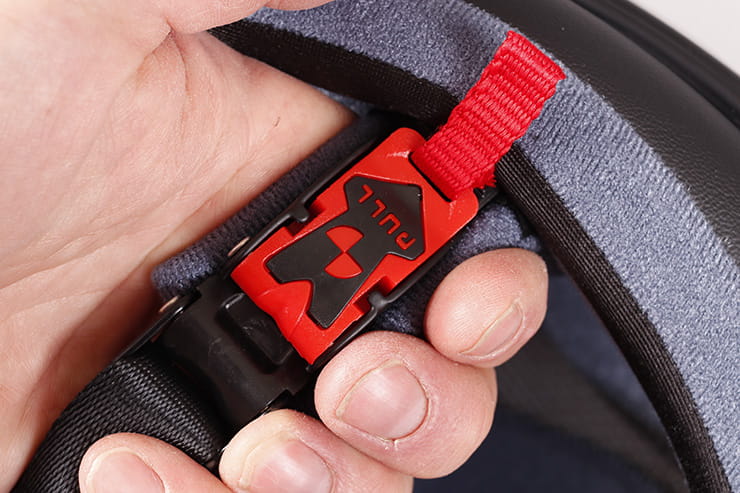 The BX-1 uses a micrometric ratchet, which is very convenient once set-up, but I prefer a double-D ring. Still, this system does mean you can use gloved hands.

The fit is surprisingly good for the price. I know everyone has their own shaped head, but I found the Box snug in the correct places, easy to get on and off and comfortable over distance.

There are slots on either side of the cheek pads for the arms of your specs to slot into, and even though a little readjusting was required, with the glasses seemingly sitting above the bridge of my nose, after a quick fiddle I was good to go.

The Box wasn’t noticeably noisy, it handled the wind, road and bikes noise well and I have no complaints. I do ride everywhere with soft foam earplugs, and the BX-1 is no more noisy than the AGV Pista GP-R or Arai RX7-V, which aren’t the quietest lids, but they’re substantially more expensive.

For the price, the Box is a good value helmet for a newcomer to motorcycling, as long as they keep to speeds of less than 50mph, thanks to that lack of chin curtain and the resulting tendency to lift. Get rid of the nose vent and your field of vision improves, while the comfort and opportunity to wear glasses or sunglasses count in its favour, even over some more expensive helmets.