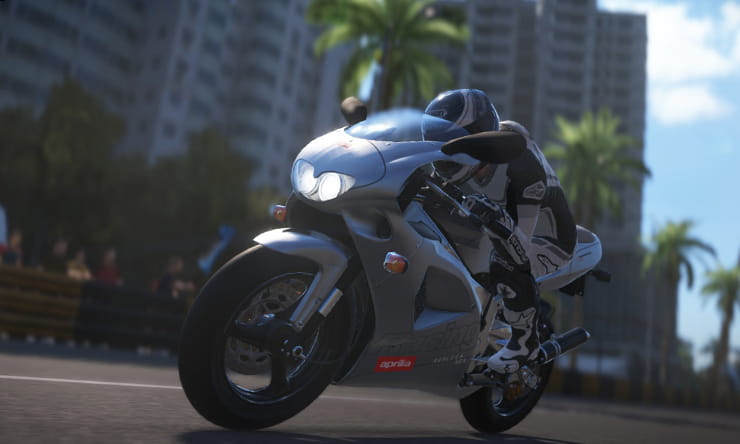 With the nights drawing in and the days getting colder, it’s a time when many of us decide to tuck our bikes away until the spring.

Which is why we should praise the heavenly beings for the guys at Italian software house Milestone, who have brought out their latest motorcycle simulator game – Ride 2 – for the PS4, XBOX One and PC.

If you’ve played a motorcycle sim in recent years, chances are that Milestone have had a hand in its development. The company started out making the official world superbike series of games, before picking up the MotoGP franchise in 2013. This year they also launched the highly acclaimed Valentino Rossi video game and an officially licenced Motocross Grand Prix title.

Ride 2 is the follow up to the 2015 release, Ride, and sees you, the player, given the chance to race over 200 bikes on 18 circuits. The circuits are a mixture of real life tracks and some nicely designed street courses based around real locations, such as Milan and Miami. These would be proper sketchy race tracks in real life, but provide a unique challenge as you dodge the virtual walls and battle against 15 computer controlled riders, who more often than not seem quite happy to race around in their virtual jeans and jackets!

Where Ride was somewhat crude and full of bugs, its follow up is super smooth and very slick. It’s clear that Milestone has learned a lot from its work on other bike sim games and although the riding dynamics of any motorbike game can never match the real thing, the controls and feedback do give a nice balance between being good fun and a full on simulator.

The new game has more tracks and more bikes than the original, with most models from all the mainstream manufacturers (excluding the guys making cruisers and scooters) and a few boutique brands, lovingly recreated. Brit fans have plenty to get excited about too, with recreations of the North West 200 and Dundrod Ulster GP circuits joining Donington Park on the roster, while several British championship race bikes make a debut on the game. These include the Bennetts Suzuki raced by Tommy Bridewell in British superbikes, John McGuinness’ TT winning Honda Fireblade and the Triumph Daytona 675R that Guy Martin rode in the 2015 Supersport TTs.

It’s all good fun and a great way to (kinda) ride your dream bikes, although I found myself more taken by the two-stroke Cagiva Mito and Aprilia RS125 (pictured) that I lusted after as a youth than I was the Kawasaki Ninja H2R, which is the game’s hero bike.

In career mode you start at the bottom, in my case working up from a humble Honda NSR125 (the Italian-built early Nineties learner bike), winning money and new bikes to progress your career on faster and more expensive steeds. The product placement is all pretty cool, with top accessory brands putting their name to the various upgrades and clothing options. To the casual gamer it probably means very little, but to the real life riders out there it all adds to the kudos and realism of the game.

While the career mode works well and has loads of variety and longevity, it’s the straightforward ‘race against a mate’ mode that’s always going to be the most fun.

When it’s cold outside and you’re getting withdrawal symptoms, put some beers in the fridge, get some mates around and whack on the XBOX. I promise you’ll never beat me around Monza!

Ride 2 is in stores and available for download now, with prices from around £44.99.