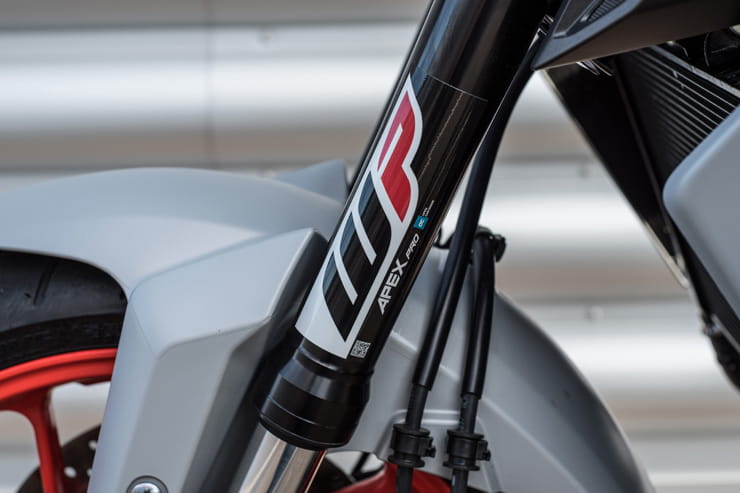 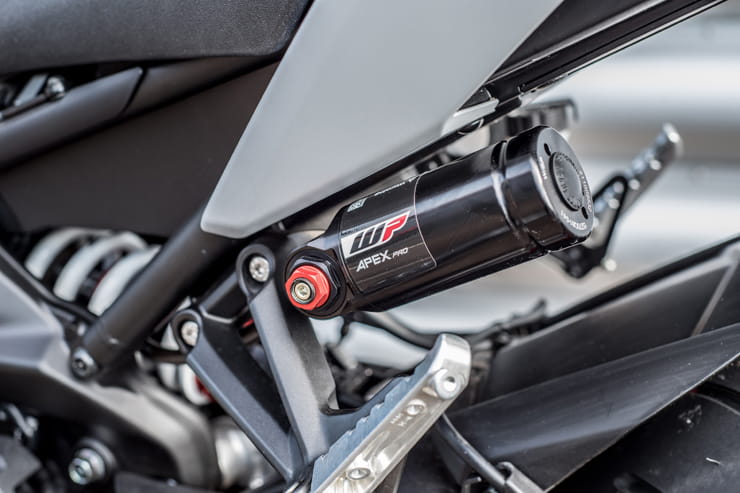 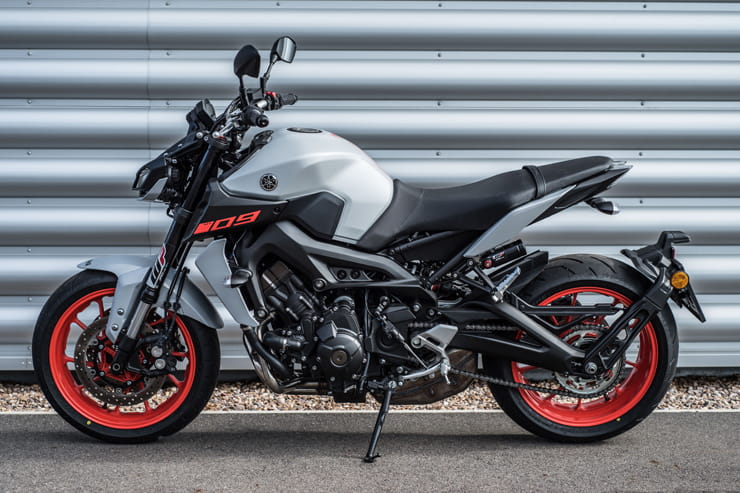 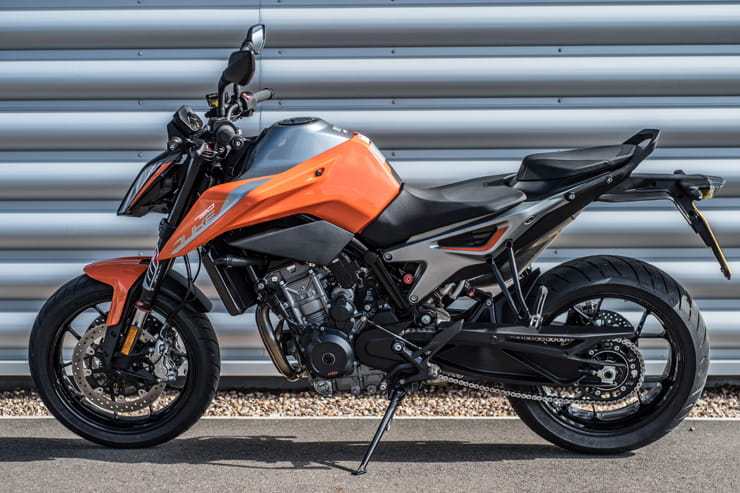 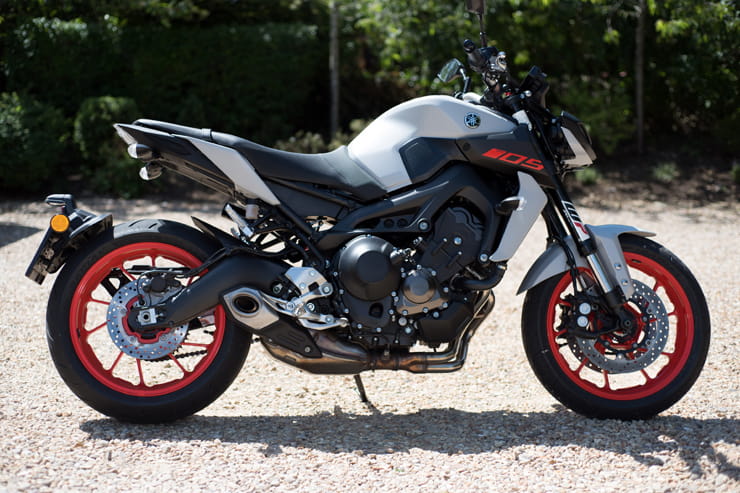 Above: WP-equipped Yamaha MT-09 and KTM 790 Duke. The fork outers are stock – with a WP sticker on them – because the interesting stuff is inside.

BikeSocial has been invited to WP’s UK base near Silverstone to try the new suspension out, and a rare opportunity for back-to-back test rides on stock and WP-kitted versions of the two bikes to find out if trick suspension makes a worthwhile difference to handling and ride quality. 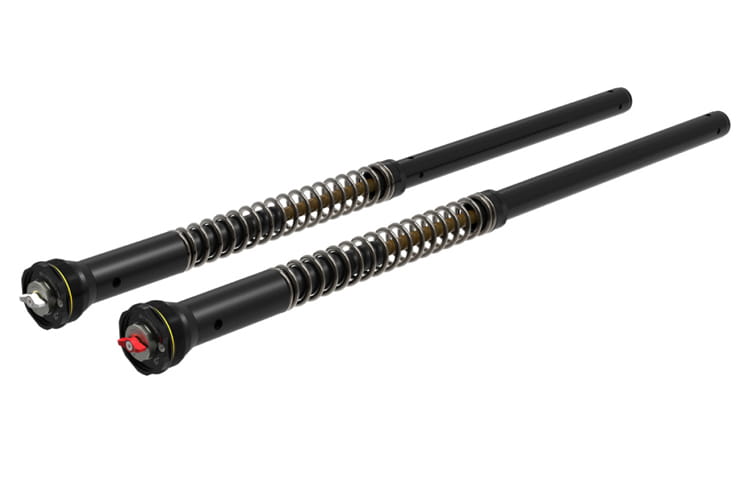 This isn’t radical new damping technology, but the kit includes bespoke spring rates to suit the rider’s, ahem, predilection for cream cakes, plus more durable and accurately produced component materials – such as hard-anodised aluminium – with closer and more consistent tolerances over standard, mass-produced cartridge internals. It’s a similar claim to most aftermarket suspension upgrades, improving on the vagaries of mass-produced tolerances, generic settings and budget component materials of stock suspension.

The Apex Pro Streetline cartridge kit also reduces weight, saving 842g over stock on the 790 Duke (hardly a pork-meister as it is). The kit features 30-click compression damping adjustment in the left fork leg and 30-click rebound adjustment on the right, as well as three-position external preload adjustment. 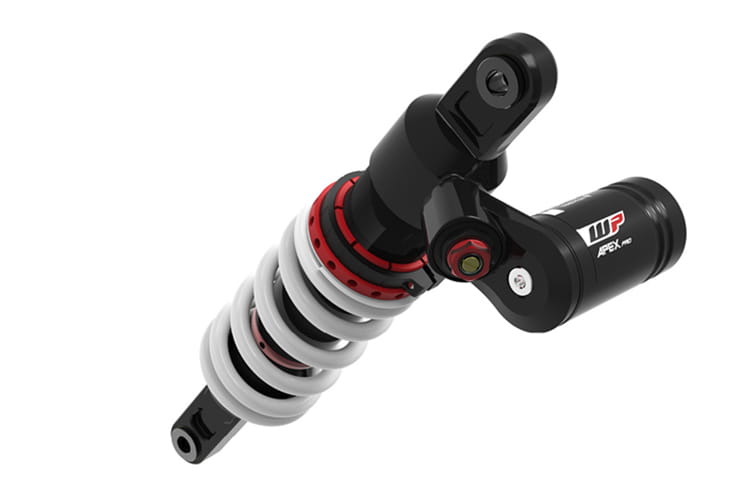 And the rear shock?

What does it all cost? 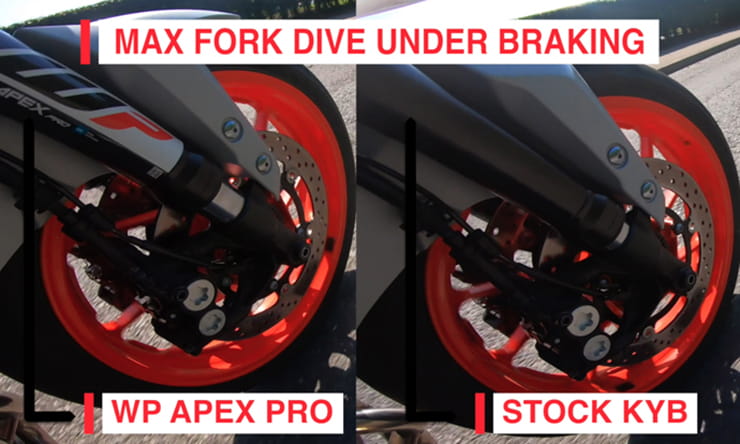 Above: Under full front end braking (up to ABS activation) you can see how much more travel the stock MT-09 uses on its softer stock springs (left) than the WP-kitted forks (right). In use, the WP suspension moves less distance – reacts less – to bumps and responds more slowly to bike dynamics like extension under acceleration, brake dive etc

Why is aftermarket suspension better than stock suspension?

Stock suspension is built to a price, so it has the lowest standard of performance a) required to control the bike, and b) that the manufacturer thinks the customer – you and me – will accept at the bike’s price point. Harsh – literally, sometimes – but true.

However, that doesn’t mean all standard suspension is rubbish – some of it is pretty good, all tings considered – but it does mean (rather obviously) a flagship adventure bike will have higher-quality suspension than a budget middleweight. And (less obviously) neither will be anywhere near good as they possibly could be, merely good enough for most of us most of the time.

Standard suspension is also built to work over a wide range of conditions – generally speaking, bike manufacturers take a one-size-fits-all approach so the forks and shock on a given bike will be expected to operate wherever in the world it’s sold (regardless of the country’s tarmac quality), and to whoever might want to ride on it. So, for example, the suspension on Royal Enfield’s new Continental and Interceptor twins is designed to cope with anything from a big fat geezer riding like a policeman on UK asphalt, to a skinny chap giving it the berries on the back lanes of Mumbai.

That’s a wide range of demands, all on the same-spec suspension units – and if the point of suspension performance is finding a compromise between different riding scenarios (payload weights, braking, accelerating, cornering, ride quality etc) then the wider the compromise, the less effective its performance in any specific riding scenario. Or put another way, the more narrow your suspension’s range of performance, the closer to an ideal damping and springing performance you can get within that range.

Aftermarket suspension has fewer of these limitations. It can cost more, so can be built with better, stronger, harder materials and more attention to closer tolerances. It can also be more finely tailored to specific requirements – its working range and design parameters can be less generic and more focussed on providing a specific performance balance.

At least, that’s the theory – and it may well be the reality; but the point is can we feel it on the road? It’s all well and good for a top level MotoGP rider and a datalogger to be able to determine the significance of a lick of rebound damping this way or that – but what about Joe and Josephine Numpty on the B660? 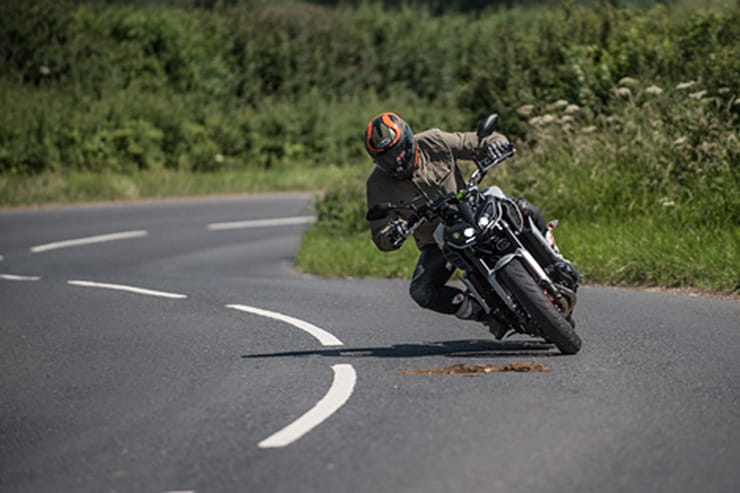 Above: WP-kitted Yamaha MT-09 at full splurge on Northamptonshire tarmac. Road debris may have been deposited on the racing line by a previous rider on the stock bike

The Yamaha MT-09’s stock suspension is made by KYB (formerly Kayaba, Japanese-based international suspension suppliers), with 41mm usd forks offering adjustment for preload, rebound and compression damping (compression in one leg, rebound in the other), and a monoshock at the rear with preload and rebound damping adjustment. We don’t have to go too far back in time to find premium sportsbikes with a similar level of adjustability; today, it’s not a surprise to find it on a moderately-priced middleweight road bike (the MT-09’s suspension was uprated in 2017 after criticism of the original bike focussed on its crude ride quality).

But adjustability doesn’t always guarantee fabulous performance – sometimes it just offers scope for the user to cock it up. And, equally, some bikes have perfectly acceptable, but completely unadjustable, suspension. No adjustment doesn’t necessarily mean no quality. 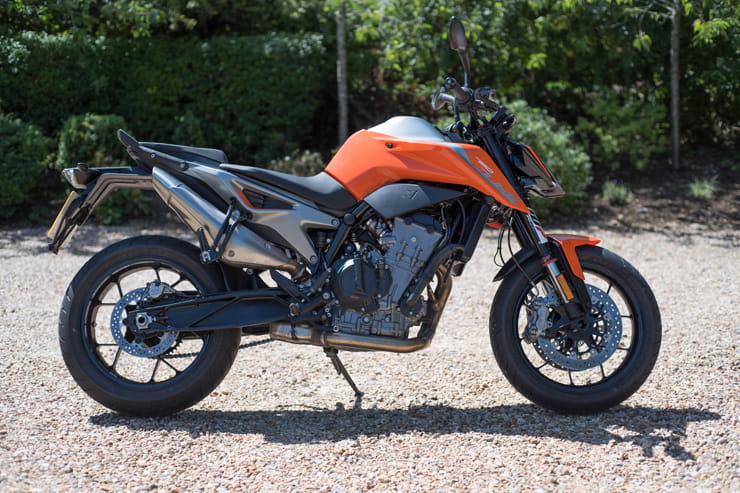 KTM’s 790 Duke already comes fitted with WP suspension – which it would, seeing as WP are owned by KTM and operate from the same factory site in Austria. But although it’s got basic, unadjustable 43mm WP usd forks and a preload-only WP shock at the back, it’s not crude – the 790’s springs deliver a perfectly acceptable level of standard performance. In fact of the two bikes, it’s the multi-adjustable MT-09 that has the springier ride, with a less plugged-in, more remote feeling from the front end. With limited time on the test ride, it’s impossible to enter into a series of extensive adjustments of the MT-09’s standard springs; it’s on standard, factory settings. 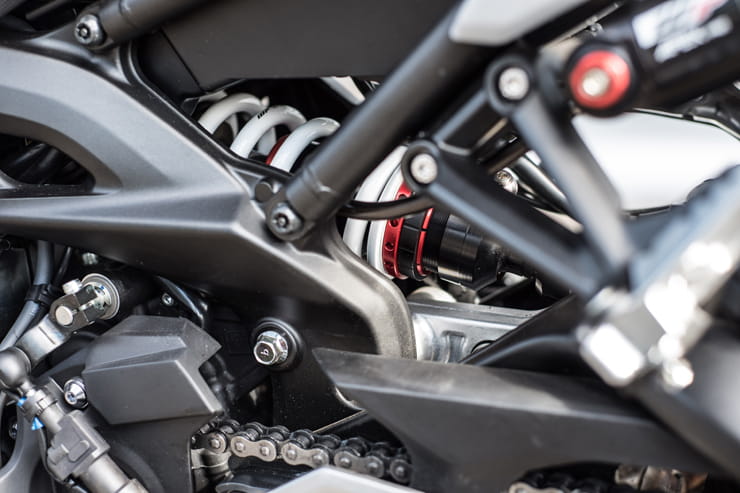 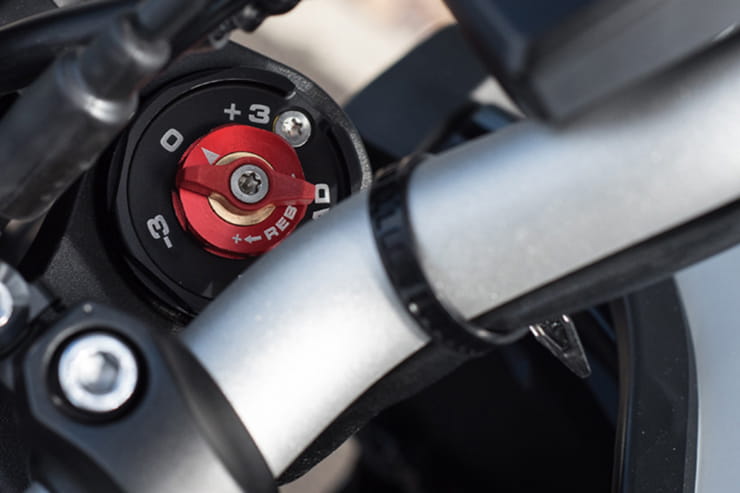 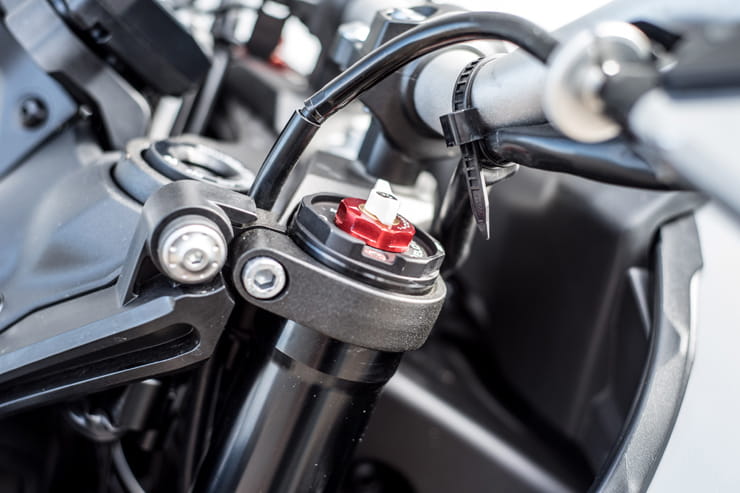 It’s important to understand right from the off that the WP Apex Pro Streeline suspension does not, in my opinion, deliver a revelatory improvement in ride quality or handling; it’s not miraculous, your concept of suspension will not be turned upside down and your MT-09 or 790 Duke will not suddenly become a different bike. The improvement will, for most people, will be relatively subtle.

But it’s definitely an improvement. The WP Apex Pro Streetline forks and shock makes both bikes feel nicer on the road. Bumps have the sharp, jolting edges taken off them; still there, but less teeth-clenching. And both bikes sit on their springs with a more controlled, less hyperactive ride – even down to making throttle inputs smoother and more measured because the bikes’ chassis is less reactive (this is more true of the Yamaha). It feels as if there’s less suspension movement overall – but what there is, is smoother and more supple. It’s hard to define the sensation exactly, but my bum and brain both agree – they like it.

Again, this is a subjective feeling and not a measured difference; my gut reaction is to recommend the WP Spex Pro Streetline suspension if you’ve more than a few track days planned and you’re starting to run out of suspension performance – although you might be minded at that point to buy a sportsbike. On the road, the benefits are most noticeable on the MT-09 – the WP-shod bike feels like it’s more capable of controlling its motor’s explosive performance, where the stock Yamaha can feel skittish and wayward. The 790 Duke already feels an order more dialled-in than the MT-09, and the new suspension is less obviously an improvement. 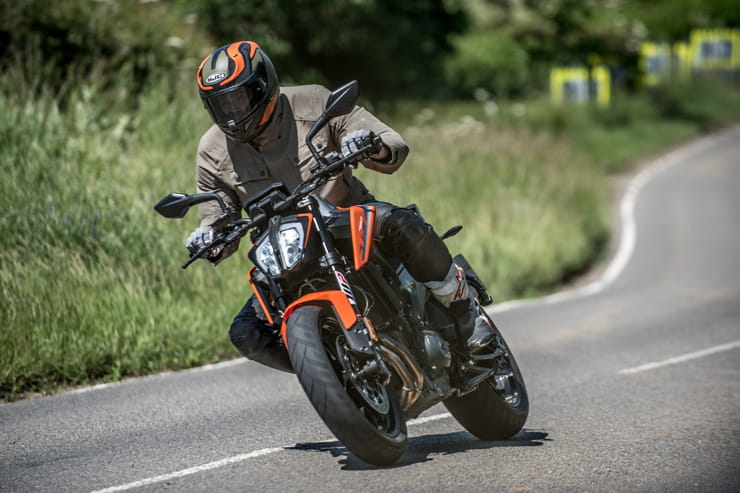 If I wanted to seriously bling-up my MT-09 or 790 Duke, the WP Apex Pro Streetline springs would be on the list – but only after I’d bought an exhaust, had its fuelling re-mapped, fitted some cosmetic bits and bobs, and bought some luggage – because all that makes a bigger difference to my daily riding life than a subtle (but noticeable) improvement in ride quality and handling control.

And it’s a problem when Yamaha already make an MT-09 on posh suspension – the MT-09 SP – and it’s just £1000 more expensive than the base bike. The WP-kit adds £1660 to the price – and the SP’s Öhlins shock also has a remote preload adjuster, which WP don’t offer on their rear shock for the Yamaha. So if I wanted an MT-09 on better springs, an MT-09 SP would make as much, if not more, sense.
And as for KTM’s 790 Duke, it’s a bit of mystery as to why a 790 Duke R, on better suspension, isn’t already on sale (it’s been seen in spy shots since the middle of 2018) – the 790 Adventure has only been on sale a few months and it’s already got two versions on souped-up springs: the Adventure R and now the Adventure R Rally.

So assuming there’ll be a 790 Duke R in 2020, it’ll need to be at least £1600 more expensive than the base bike to make WP’s Apex Pro Streetline worthwhile. 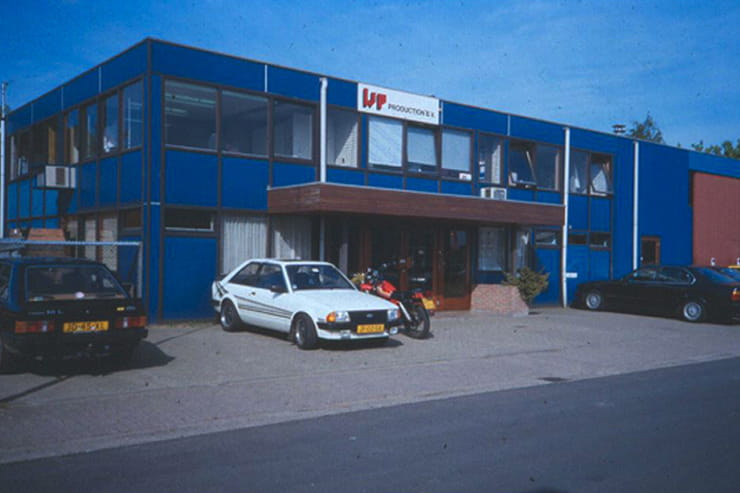 The company was founded in 1977 by Dutchman Wim Peters, the WP in WP (the company was initially named White Power, because the original spring supplier only supplied springs in white – they also supplied a hospital bed manufacturer). WP had significant racing success on and off-road, and also supplied suspension to Michael Schumacher’s title-winning Benetton F1 car in 1994. In 1995 the company was bought by KTM and manufacturing eventually moved to Mattighofen in Austria (although Wim Peters still works at the original site, now a division of KTM off-road motorsport). WP have won a combined total of over 300 world motorsport championships across multiple disciplines, competing in Moto3, Moto2 and MotoGP as well as their motocross and enduro activity. They’ve also been on the TT podium 30 times in the last ten years, supplying Padgetts with rear shocks. 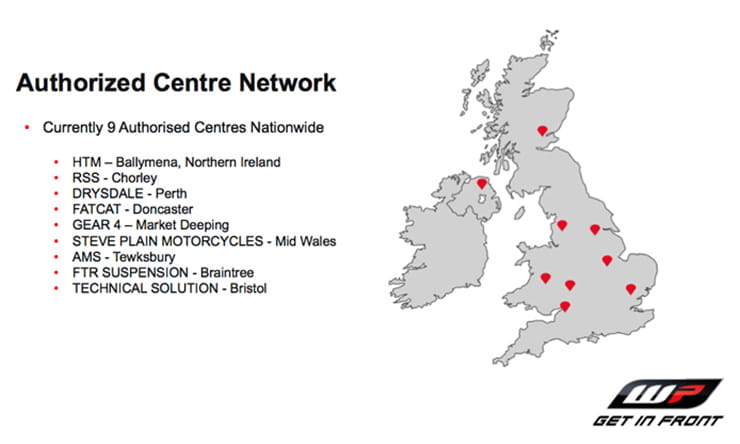