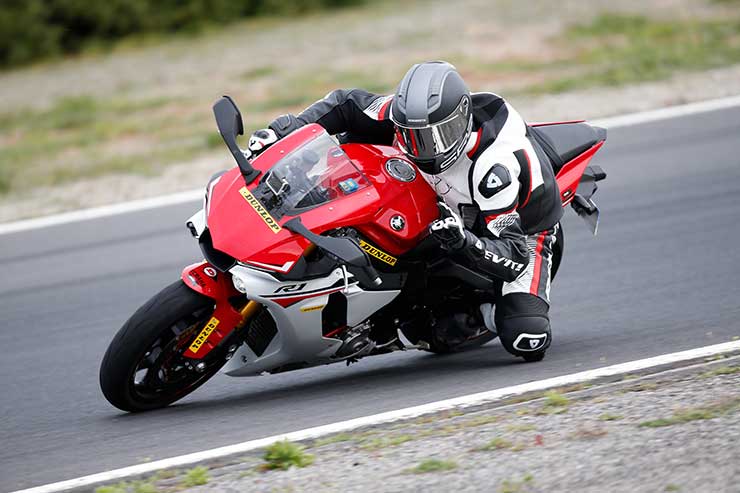 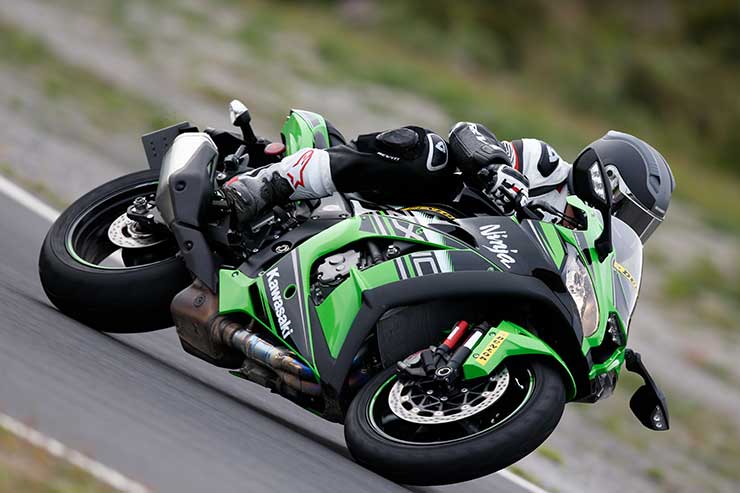 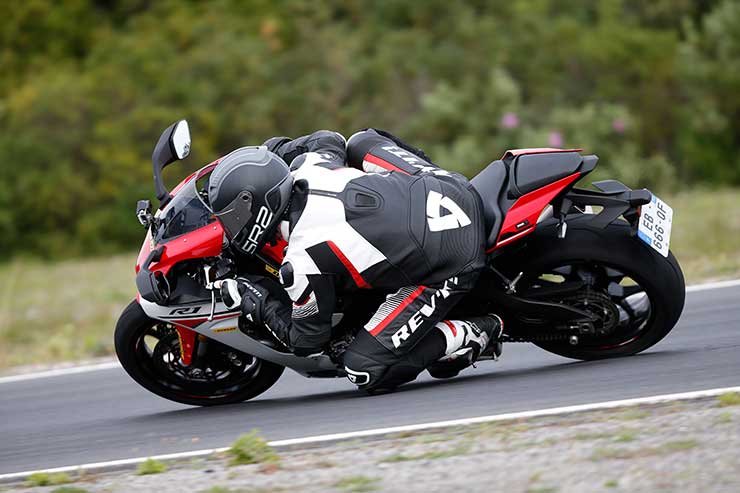 Braking hard downhill while trying to turn a bike at the same time can lead you straight to A&E especially in 4th gear with the throttle cranked to the stopper on the 200 bhp Yamaha R1 shod with the new Dunlop SportSmart2 Max tyre. The new Dunlop rubber is aimed at fast road or occasional novice / intermediate track riders.

Entering the fast, downhill, right-handed turn one at Dunlop’s Mireval high speed proving track in the South of France, is a daunting experience first time around. You pick up speed going down the hill but as you reach the bottom the bike needs to get through a kink in the track before dropping on its ear for a tight right bend with maximum lean angle while you are still hard on the brakes. Phew. I've only got 'round two corners and the new tyres are already impressing.

I have survived the road and race track before using race rubber, tyre warmers and by always getting my braking done before attempting to turn the bike. Yet as I hammered into Turn 2, my heart was in my throat with the small rubber patch of the front fast road tyre heavily loaded under the weight of the bike, plus me plus the massive brake forces thanks to the hard-working calipers as they cling tightly to the twin 320mm discs, all while you're trying to turn. 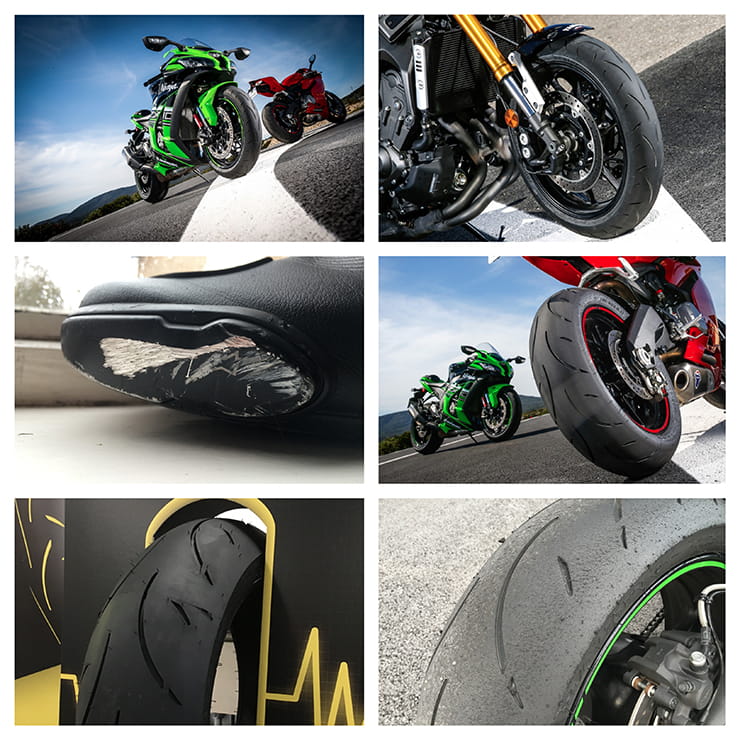 The SportSmart range was first launched in 2010, like many performance tyres you were at risk when you first set off !!!

The SportSmart range was first launched in 2010, like many performance tyres you were at risk when you first set off because it took some time before the tyre was up to temperature on the road. Fast forward to 2017 and from a cold start without warmers and only two laps into my track session, I was already dragging my toes and touching eyebrow down through the corners.

The thing I like most about the new tyre is the Endurance Championship-developed grip and extended wear. The neutral profile makes it role and flickable in a surefooted way as opposed to a race tyre which has a more defined peak in their profile making them faster to drop onto the larger side-wall contact patch. These new Dunlop's are easier to turn because the profile is consistent all the way around.

We've been testing the SportSmart2 Max on the road and track taking in the scenic mountain roads of Montpellier that surround Dunlop’s proving ground at Mireval. The new tyre is best suited to naked bikes like the Yamaha MT-10, the Kawasaki Z1000 or the BMW S1000R they make riding these bikes easy and inspire confidence. On track the high performance sports bikes performed really well, however the limits could be reached quicker but even so, I'd still be comfortable running the tyre the fast group on a track day. If I was trying for the lap record I would use race rubber like the Dunlop GP Racer D212.

Dunlop has identified three rider categories for their 'hypersport' range: Professional Rider, Seasoned Track Rider and Street Rider. Why? Because riders are choosing tyres with a specific type of riding in mind and therefore Dunlop has developed tyres and technology that suits the requirements in each category.

The roads around Montpellier offered the perfect testing ground for the tyre. We rode a 100-mile loop testing the tyre on a range of bikes including a Kawasaki Z1000, Yamaha MT-10, Suzuki GSX-S750 and the GSX-S1000. We started out on rough single track roads with gravel, pot holes, patchy repaired tarmac, some really old cracked low friction porous surfaces with completely worn out sections. There were a number of slippery roundabouts where trucks had dumped dust and dirt to be negotiated. Some of these roads were like forgotten single tracks. There was a steep down hill with a series of tight switchback hairpins. We rode a bunch of sweeping roads much like British A-roads, winding up and down the side of the mountain. This was perfect knee down riding where we could push the tyre.

The one thing all the roads had in common was that we had to switch from having the bike on its ear on one side to the other side often really quickly.

This is what Dunlop had in mind when they developed this tyre. The neutral profile allows you to flick from one side to the other effortlessly. The tyre was stable and I found myself concentrating on reading the road more than what the tyre was doing. In my mind this was a good thing as I no longer had to think if I had the grip. It was also good because there were large piles of gravel on some of the tracks that would overcome any tyre.

I once rode off the edge a tyre entering Paddock Hill Bend at Brands Hatch in a race, which on a litre bike is circa 150 mph. I had the red mist and was determined to overtake so pushed over the limit. The result was catastrophic...I'll leave it at that!

Dunlop have incorporated a great feature in the new tyre by adding a small lip on the edge of the tyre where it transitions to the sidewall giving the rider warning that they've reached the edge of the tyre at its lean limit. This is confidence inspiring for any rider.

The SportSmart2 Max stayed planted and assured, and even over the worst surfaces, didn’t slip once.

Dunlop has also managed to limit the amount the bike stands up when you brake in a corner. I tested the theory a few times on both sweeping and tighter corners, I was respectful and didn't just grab a handful of brake. As predicted the bike continued on its path without standing up or running wide.

Hitting the brakes really hard on every ABS-equipped bike resulted in the tyres bringing me to a speedy, controlled stop. Again this was on the kinds of surfaces we have in the UK.

Braking hard for corners the front felt planted and never gave any indication it would give up. I always experiment carrying a bit of front brake into the bends to see how it feels, loading the front edge under braking and the front remained stable. Dabbing the back brake or trailing in hairpins never created any moments either.

One section we rode had a series of fairly steep down hill hairpins; I am always more cautious braking down hill but thankfully there were no surprises, the bike remained stable and planted.

The front tyre gave great feedback and felt stable and controlled at all times. The rear tyre did all that it should do offering loads of balanced grip. On the big sweepers under hard acceleration I could feel slight movement in the tyre, on the road it never slipped or spun at all.

I felt immediately comfortable and confident on the tyre and it encouraged me from corner to corner, with my speed and lean angle increased.

It was suggested that we choose bikes that we are most accustomed to riding so we could concentrate on the tyre and not getting to grips with the bike too. I picked the Yamaha's YZF–R1, and the Kawasaki ZX-10R. Both of these bikes are more than capable of pushing the boundaries of any tyre.

I am accustomed to using tyre warmers on track but as the SportSmart2 Max is designed for the road and attaining grip in a wider and often lower operating temperature we didn't use warmers for our test. In fact, it we were advised against using warmers. I gave the tyre a couple of laps to warm up and to give myself the confidence before pushing.

The Mireval high speed proving track is just that, it is not designed as a race track. The track has been built to test everything you would find on the road, this means its really technical and if you, the bike or the tyre are not up to the test you can find yourself on the way to A&E.

You are leaned over dragging an elbow, the camber is positive and up hill as you approach the start straight. As you exit the corner the track flattens out which is just around the place you are rolling on to full throttle. The track layout means its also a place to show caution and not throw it to the wind.

I found after I had stood the bike up with a touch of reverse counter steer I could have the throttle pinned open on both the R1 and the ZX–10. Some riding naked bikes in the same place where on the back wheel coming off the bend and staying on the back wheel for most of the straight.

For a tyre aimed at the occasional track day rider there was more than enough grip. On track you could get a predictable slide which started a bit earlier than it would on a track focused tyre but it was smooth and predictable.

The tyre never once gave me any indication of giving up on me, even when riding the ZX-10 which offered less traction than the R1 on corner exits.

The next section of the circuit sees you running through a chicane that has your eye brow on the deck on one side then the other and back again. It was really smooth and easy to transition.

From a grip and confidence point of view this tyre has all you need. If you want to shave times of your lap times, then that is when you should be looking at the tyres that offer more like the GP. 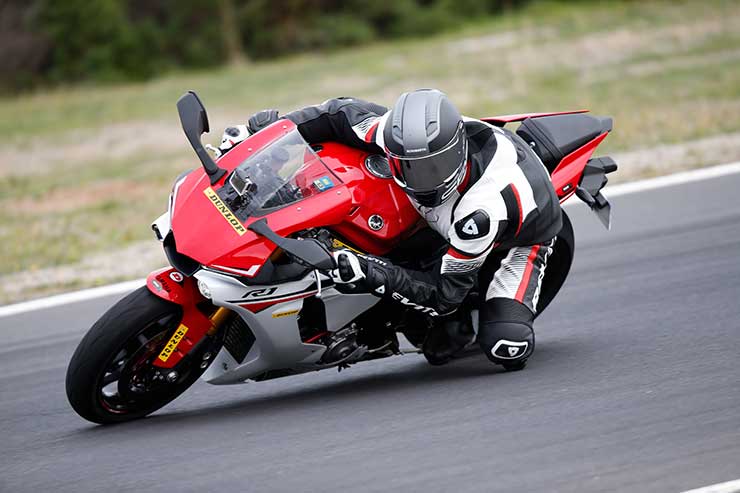 The front tyres' new construction reduces tyre deformation caused by forces at high speed especially at lean angles. This means that its easier to change direction and I found this to be true both on the road and track.

Dunlop say that they have proven that they have improved front durability by a staggering 25%. I could not say if this were true but the tyre showed no sign of wear at all after fast riders had been pushing the tyre for eight x fifteen minutes on the track.

After the eight track sessions the wear was even and there was very little sign that they had even been used on track. "Sold as seen"!

The competitor brands have called their fast road tyre; 'Sports Touring'. I tested all the 2016 ST tyres, all have a neutral profile and all improved how long they last. However, they all had new treads designed to improve stability and better water dispersion. Front tyres are single compound and the rear dual compound tyre has been increased to 100% silica to offer better wet grip. I tested the wet grip of all competitor tyres and was happy to drag a knee in the wet on each.

Dunlop are happy with their tread design and their grip level so they focused on getting better dry grip, faster warm up times with a bigger window for best grip, better handling and added the safety features mentioned. We did not do any wet testing in France but I will be testing the tyre on the UK roads so no doubt I will be testing the wet grip soon and will post an update.

Dunlop quote the following improvement over the incumbent SportSmart2

The new tyre was used by Lucas Mahias, the current World Endurance champion, and he had enough grip to run 4-6 stints (+200 miles) on a front and 3 stints on the rear at Catalunya during a recent race. Dunlop have taken a number of Isle of Man TT wins including the fastest lap times and have been developing over the years with the French Superbike team. They've also won 16 endurance championships in the last 22 years.

Overall, the SportSmart2 Max is a very competent all-round tyre. 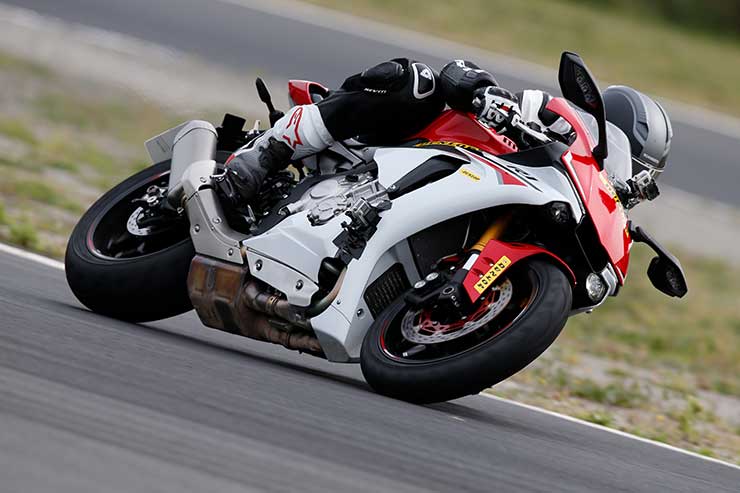 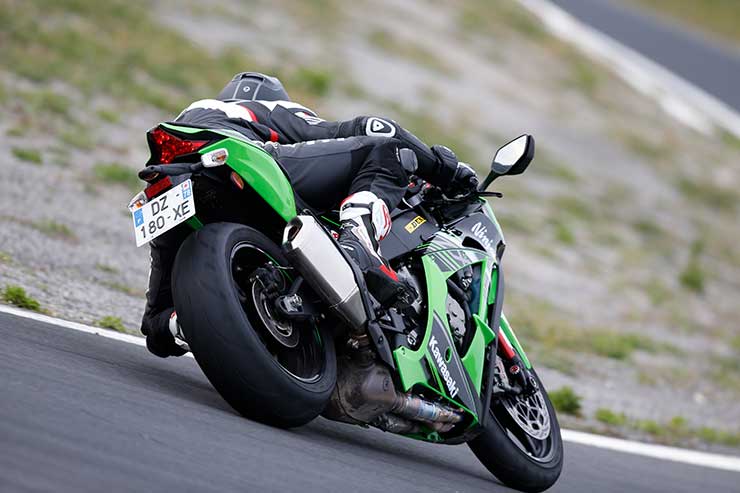