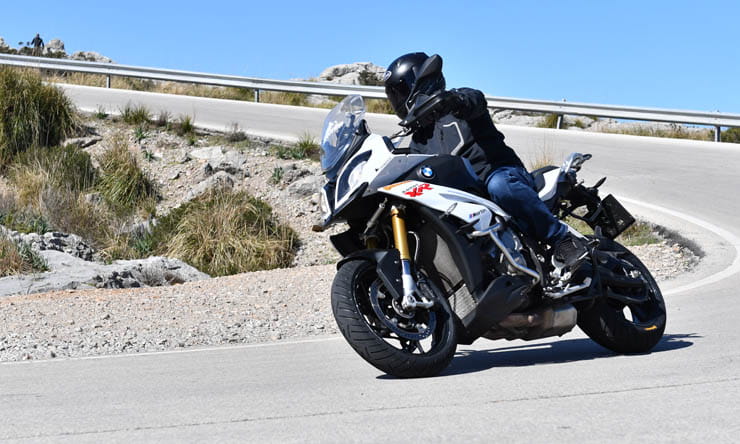 I became a fan of sport touring tyres years ago after accidentally having a pair fitted to an Aprilia RSV1000, and was impressed at how much easier they were to live with on a daily basis than the track day rubber I was used to. They worked all year round, lasted forever in comparison and were even fairly useful at endurance racing.

The all new Road Attack 3 (RA3) from Continental is visually quite a step forward from the Road Attack 2 EVO (RA2 EVO). Its new angular tread pattern, while understated, has clearly borrowed heavily from the 2016 Sport Attack 3, but with additional grooves for channelling more water, and has a modern appearance that is aesthetically more attractive than the curvy RA2 EVO.

Claims for its performance suggest useful overall improvement through a series of marginal gains rather than a game-changing leap forward.

While different manufacturers may produce sport touring tyres with different characteristics, it is not easy to find a top brand sport touring tyre that underperforms in terms of warm up and dry grip these days. This is an area where we now take exceptional performance for granted. Sports touring customers are particularly interested in longevity and wet grip, which are the two areas that Conti has coincidentally made the biggest improvement. Alas the weather gods had once again conspired against us, and without a rain cloud in site on test day there would be no opportunity to assess their claims at the press launch in Spain.

The RA3 should take you ten percent further than the RA2 EVO which will please potential customers. Conti declined to be drawn on numbers in miles or kilometres but say that they arrived at this figure from like-for-like laboratory testing.

With the use of their ‘Multigrip’ technology, Conti are able to reproduce the qualities of a dual compound tyre within a single compound by varying the temperature between shoulder and centre during the curing process. This results in a harder centre for longer life and a softer shoulder for maximum grip.

The 4.5mm front and the rear 7.2mm of tread bodes well for a decent life span

We had a good selection of bikes upon which to test the new rubber – naked, adventure, touring, sport touring and super moto – with the manufacturer obviously confident that the RA3 is a consummate all-rounder. My plan was to try three very familiar bikes from different categories to get a rounded appraisal. While perusing the bikes in a cold and windy hotel car park I noticed that the tyre tread appeared particularly deep, though hard to tell without a different tyre for comparison. Conti confirmed that the front has 4.5mm and the rear 7.2mm of tread which bodes well for a decent life span.

Also notable was the finish of the tyres – despite being new they all looked, at glance, as though they had been pre-scrubbed for the test. Cue ‘Traction Skin’ technology – the tyre is finished with a “micro-rough” tread surface which gives the appearance of a used tyre, and replaces the slippery looking (and feeling) surface of a traditional tyre that is caused by the use of release agents during manufacture. The result of this new process is to “virtually” eliminate the need to scrub in the tyre which, in my mind, is an unquestionable bonus for us consumers and genuine progress in Conti’s product development. 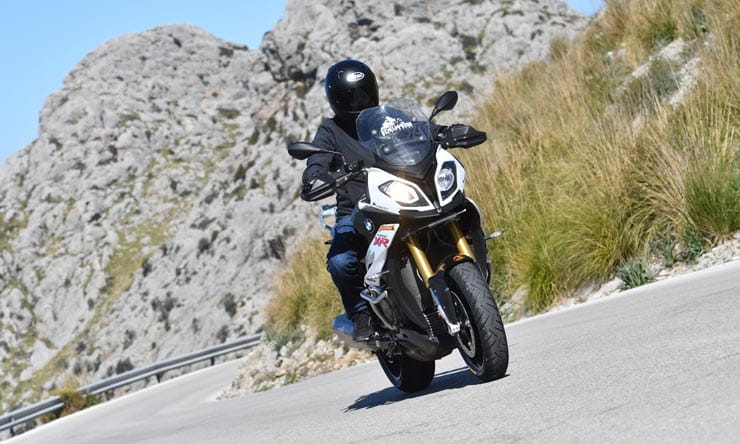 In an ideal world, as well as public roads, there would be a private test facility for specific disciplines including wet testing but instead we had over 200km loop of differing road types and surfaces from sea level to 4,700ft in the Tramuntana Mountains of the west. Easily enough to get a decent picture of how this tyre performs.

The air and surface temperatures were still low as I departed on a BMW S1000XR, always best this time of year to start on a bike with heated grips I find. When I attended my first tyre launch in the mid-‘90’s, and without the benefit of ABS or traction control, you really did have to ease tyres up to temperature before thinking about where its weaknesses may lurk. Now, in theory, I can get down to business from the off with electronic aids watching my back.

On minor bumpy roads leading from our hotel to the nearest two lane highway, the XR felt balanced and composed over irritating ripples and tar lines, without wandering from whatever line I decided we were taking. A few badly cambered roundabouts provided the first opportunity to agitate the rear. A good handful of throttle, just before straightening up for my exit, only resulted in compressing the shock and launching me on to the next straight. While not exactly earth shattering news, it’s none the less fairly impressive that the traction control could not be roused on cold, well worn tarmac, and goes some way to instilling confidence early in the day.

Nothing much to report at a steady 120mph with a fair crosswind either. The ride is comfortable and quiet with no negative reaction to me swerving from the painted rumble strip next to the hard shoulder to grooves left by trucks in the nearside lane, and back again.

With the straight section complete the interesting climb from Pollenca to Coll Dels Reis up in the mountains begins allowing some rhythm to build up as the temperature begins to drop again. At a quick, appropriate pace the XR would roll repeatedly from one shoulder of the tyre to the other with ease. The cold wind returned at higher altitude and on two or three occasions I had to grab the front brake mid-corner. Twice because of an unexpected increasing radius and once to avoid rear-ending a panicked journalist, which did trigger the ABS and a minor cardiac, but left the RA3s totally unflustered. The faster the pace, the more the front end dug in through the corners and no amount of line changes could upset the Contis.

Our mid-morning coffee stop arrived suddenly at the top of the mountains and by this time I was genuinely impressed as it was still cold, yet I was already so confident in the tyres that the chicken strips on the rear tyre were long gone. The heat had left the stationary tyres within a few short minutes, a reminder that the air temperature was still low.

I hopped on an unattended BMW R1200RT and set off for a more leisurely comparison, but with the tyres now shouldering over 350kg and plenty of switchbacks to go before lunch down on the coast, they would inevitably be in for a bit of a workout. The balance and neutrality of the bike is more pronounced and defies logic with its inflated girth and heftiness. It remains surprisingly nimble and able to turn relatively quickly through the snaking and undulating downhill stretches between the bends. No big quirts of throttle but very hard late braking and plenty of trailing brake through the corners kept the RT planted and stable – a testament to a sorted bike mated to competent rubber. 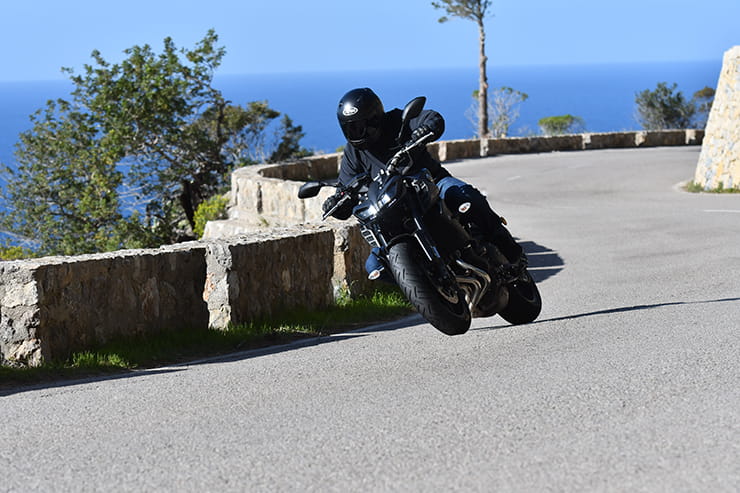 It was down to Yamaha’s revised MT-09 to provide the naked experience and round off the last 80km of the test loop. Air temperature is now at the maximum 20degrees for the day and the sun has been warming the tarmac for a few hours, so I disabled traction control and set off. When you have good tyres without negative characteristics, it’s quite difficult to concentrate on them for very long, particularly in the case of the MT-09, because you have a fun bike and enough trust in the tyres to do their job without attracting attention to themselves.

Admittedly this is not a high horsepower engine but the MT is ideal for highlighting the capabilities of the RA3s. Powering out of roundabouts and throwing the bike hard into turns feels fantastic. Holding a tight line, then digging in harder when the curve tightens, before yanking the throttle open all happens with the minimum effort and generally without a twitch. On two occasions I did feel the rear just about lose traction, just enough to complain and squirm, rather than step out, which just served as a reminder to calm down a bit. Also noticeable now is just how much information I can get from the road surface fluctuations. By the end of the day, the Yamaha had been punished by several enthusiastic testers but the rear was showing no particular signs of fatigue.

This is only half a test of course and I wish we could have tried some wet roads or even a dry race track for perspective. Having sampled the tyres on a naked lunatic, faux adventurer and rotund tourer I can safely say that as far as dry grip and overall manners are concerned, the RA3 is an excellent road tyre.

Dunlop Sportmax D222s were standard fit on my 900 Tracer, an odd choice as they were past their best at well under 2,500miles and alarmingly poor on cold, wet roads even when nearly new. The Road Attack 3s will replace them because they will no doubt last twice as long and, if this experience is anything to go by, offer the kind of wet weather performance that is currently lacking.

The most popular sizes are available now at around £240 a pair.